Tusker House Restaurant is a table-service character meal in Animal Kingdom’s Harambe. Themed as a marketplace, the restaurant offers a buffet of African salads, entrees, and desserts, along with some less adventurous items for guests to try. Not far away from Kilimanjaro Safaris, Tusker House features Mickey, Goofy, Donald and Daisy dressed in their safari outfits. Tusker House Restaurant does take part in the Disney Dining Plan (1-credit) and also offers an annual pass and Tables in Wonderland discount. This review will include photos of our meal at Tusker House, as well as our thoughts on the experience and value of the restaurant.

Like everywhere in Animal Kingdom’s Africa, Tusker House is themed to perfection. Harambe acts as a little village with shopping and dining throughout. The African town gets visitors ready for an adventure, eventually landing them in a safari. Tusker House keeps with the identity of Harambe, continuing the marketplace aesthetic. 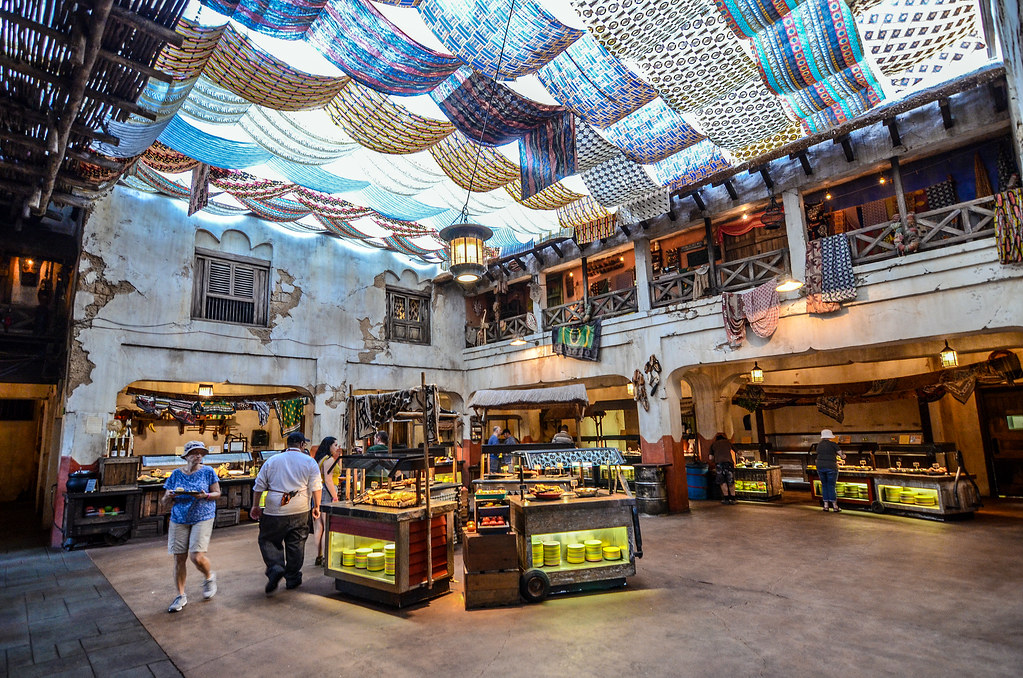 Diners get all of their food in this area, a worn building that fits with the rest of Harambe. The cloth roof is beautiful and adds a vibrance to the area. Just like the rest of Animal Kingdom, the attention to detail is exquisite. From the aged building to the exposed power lines and everything in between, Tusker House envelops guests in the ‘African Marketplace’ theme. 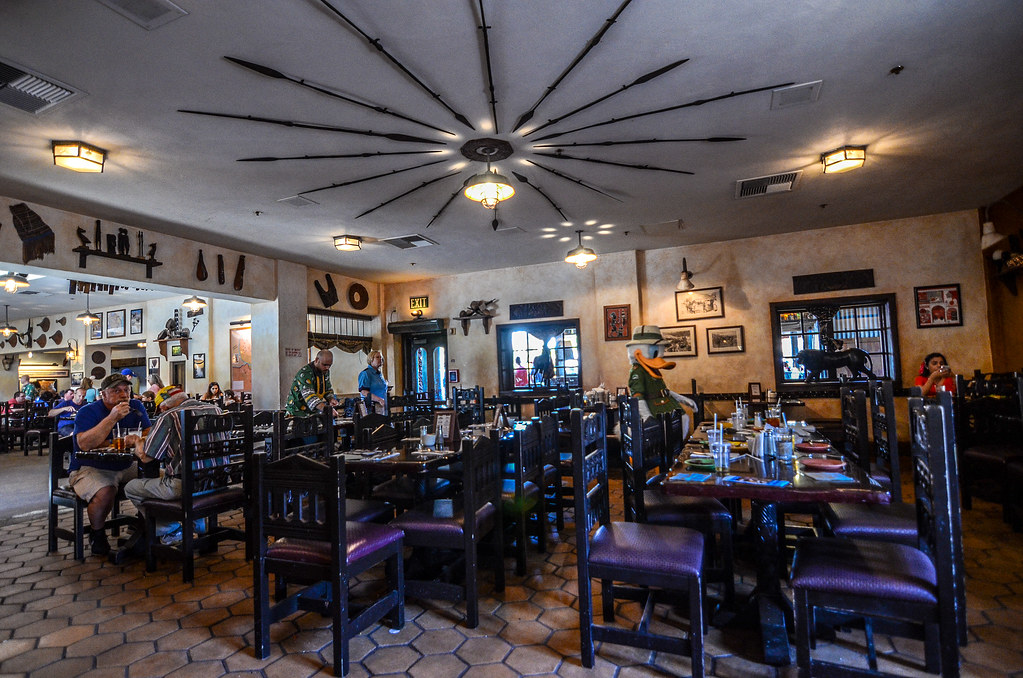 There are several dining rooms, although none of them quite match the thematic elements of the main room. That’s not to say they don’t fit or look bad, there are plenty of wonderful details and overall the theme remains strong. The dining rooms just don’t feel quite as authentic as the main room does.

Part of that probably has to do with the characters wandering around. I’ve never been to Africa so I can’t be sure but I’m fairly certain that Mickey and his friends aren’t wandering around many markets there. That’s not to say that this shouldn’t be a character dining meal, as I think this is one of the more fun integrations of characters at a meal. 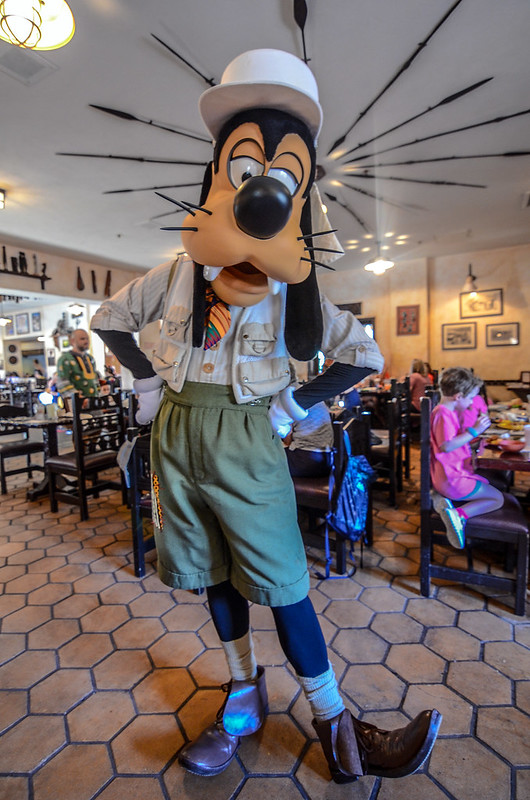 All four characters have great costuming and provide fun interactions for guests. Having Disney’s most iconic characters dressed to ride Animal Kingdom’s flagship ride is a fun move and pretty good integration as far as characters being in an area they otherwise wouldn’t be in. All four characters will visit a dining room at nearly the same time so time your buffet trips carefully. Our waiter informed us when the characters were coming and I imagine that’s common practice among the wait staff.

Between the strong atmosphere and fun character interactions, Tusker House does well in terms of experience. The only negative that we found is the waiting area is outside. There is shade and the excellent Dawa Bar in that area but having to wait in Florida heat can be troublesome. Don’t consider that much of a negative, more just a warning to not show up at your reservation way ahead of schedule. 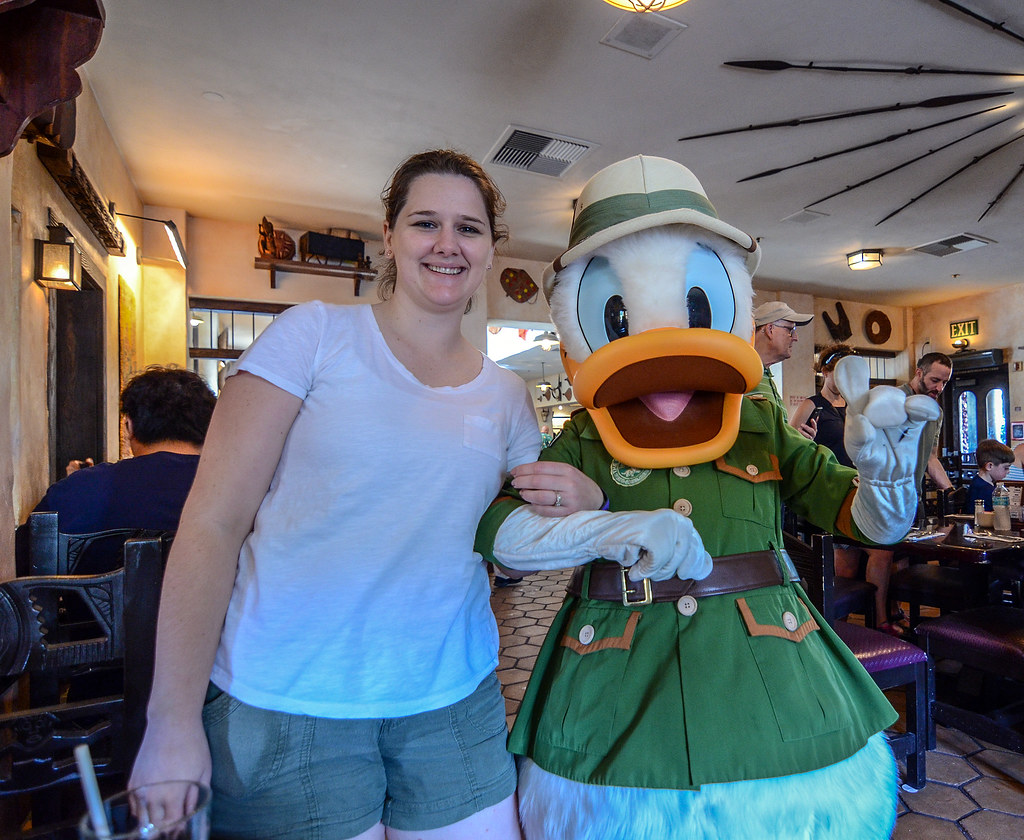 As for the food, it’s more adventurous than your typical character or buffet meal but not to the point where it will scare anyone away. Tusker House walks a fine line in offering some unique, African-inspired dishes while still offering a few typical buffet standards. Because of this the restaurant is a safe place to try but doesn’t reach the culinary heights of Boma, the excellent African buffet at Animal Kingdom Lodge. Let’s take a look around. 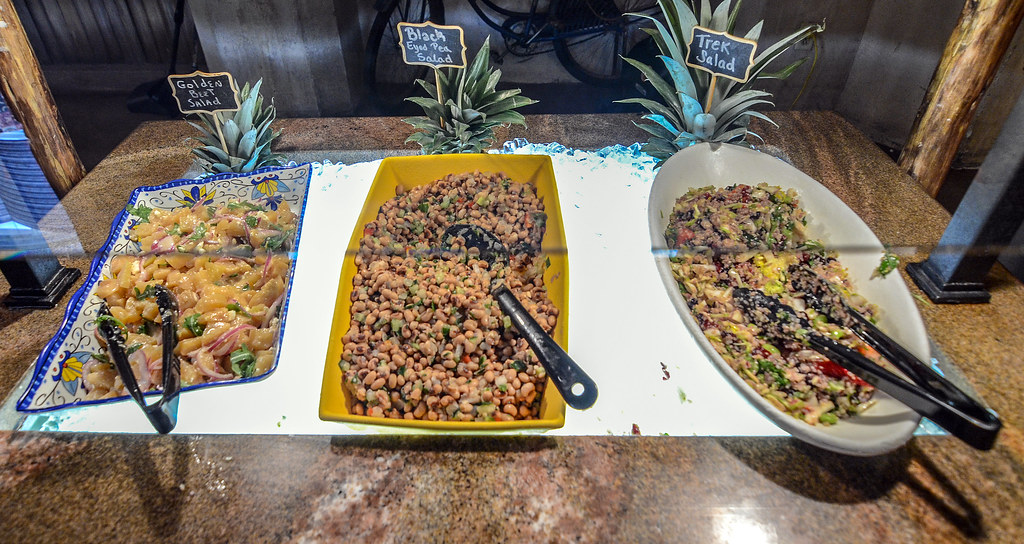 There were a few fairly adventurous salads. I enjoyed the Trek Salad quite a bit although the texture wasn’t my favorite. The Golden Beat Salad was refreshing. I wasn’t a fan of the Black Eyed Pea Salad but that’s just because I don’t like Black Eyed Peas. I gotta feeling some others might feel differently. There were a few green salads, as well.

The carving station featured Pork Shoulder and Peri Peri Salmon, both of which were full of flavor and juicy. The salmon did have quite a few bones in it (they did warn us) so watch out for that if you had little ones. These were two of my favorite items on the line.

Here’s a few more dishes that were unique. The Pigeon Peas and Rice had good flavor without being too salty, it was similar to fried rice. The Mealie Pap was a little bland to my taste, although very creamy. It’s worth a try! The Plantains and Rotisserie Chicken aren’t as unique but were prepared well.

The Kushri was similar to a casserole. It had a nice range of texture with a tomato taste. A quick Google search leads me to believe that this should be spelled Kushari, an Egyptian dish, but maybe there are differences between them?

Tusker House did offer a good amount of vegetable dishes, making this an appealing place for Vegetarians. As a whole, the restaurant kept all of the hot dishes fresh and swapped them out regularly. I appreciate this, especially compared to a few other Disney buffets I’ve been to.

There were a few other dishes not pictured as well as a pretty broad bread selection. Melissa really enjoyed the Pita Bread. Moving on to dessert… 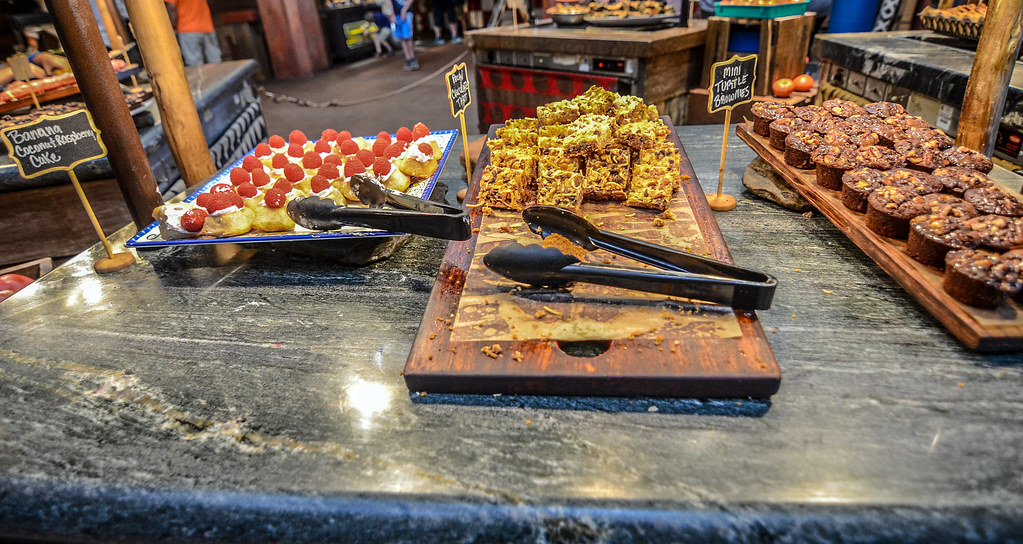 There were a good amount of desserts to try, all of them solid.

My favorite of the desserts was the Banana Bread Pudding (not pictured) and the Banana Coconut Raspberry Cake. Having said that, I didn’t think there was a true standout in terms of the dessert.

Overall, the food was very good for a theme park buffet. The dishes are interesting and prepared well while still offering something for picky eaters. Here’s a look at the menu for those interested, there is more offered than what’s listed on that link. Where Tusker House misses is not having a couple of dishes that really wows guests. Everything we tasted was good but neither Melissa and I had anything that made us want to go back and have again. That’s what sets Boma apart from Tusker House, as there are some excellent dishes at Boma as well as an overall upgrade in food offered. 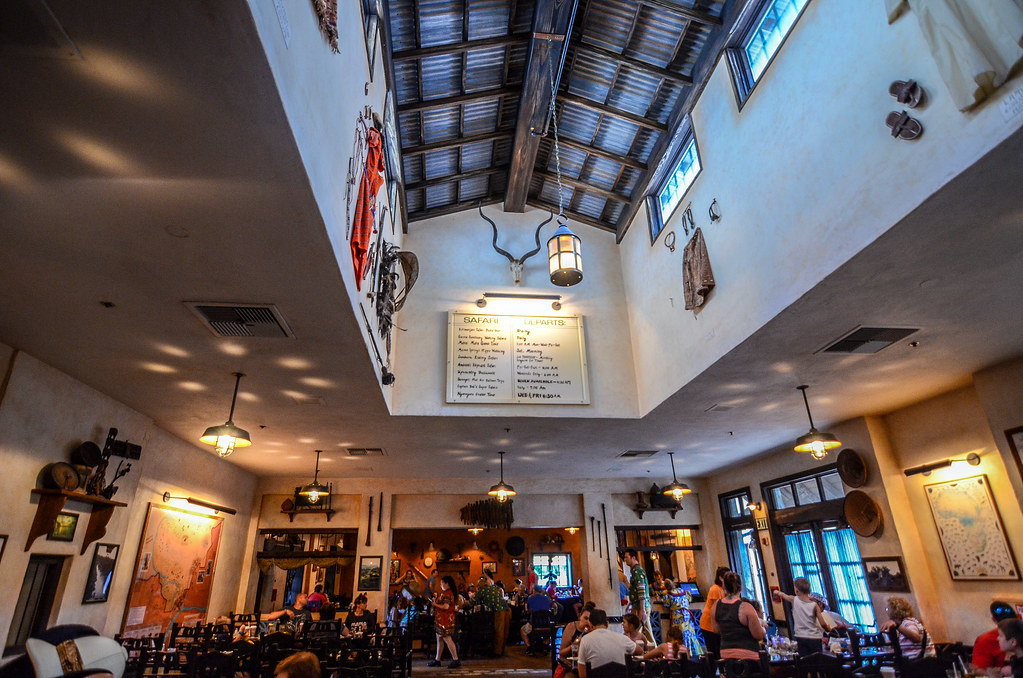 Choosing between those two buffets likely comes down to the party you’re traveling with. If character dining is a priority then Tusker House is a strong option that won’t disappoint. If that isn’t important then Boma is the way to go.

Dinner at Tusker House is $41.99 while lunch comes in at $34.99. Go for lunch if you’re paying out-of-pocket, as the menus are largely the same. If you are on the Disney Dining Plan consider booking the Rivers of Light dining package, as that is still just 1-credit. The show isn’t extremely popular but it adds a little more value to your meal, basically giving you an extra FastPass to Animal Kingdom’s nighttime show. Overall, this is one of the cheaper Disney buffets while offering great character interactions and solid, unique food. I think there’s some value in this meal regardless of if you’re using the Dining Plan or not.

As a whole, Tusker House was good all the way around but not great. The atmosphere mirrors Harambe well, the character meets were fun and the food was tasty. Unfortunately, nothing stood out about Tusker House. That could change if you have young ones in your party, as the character meet & greets are more valuable and memorable. For us, Tusker House fills a void in Animal Kingdom’s dining scene but doesn’t have anything that will keep us coming back. 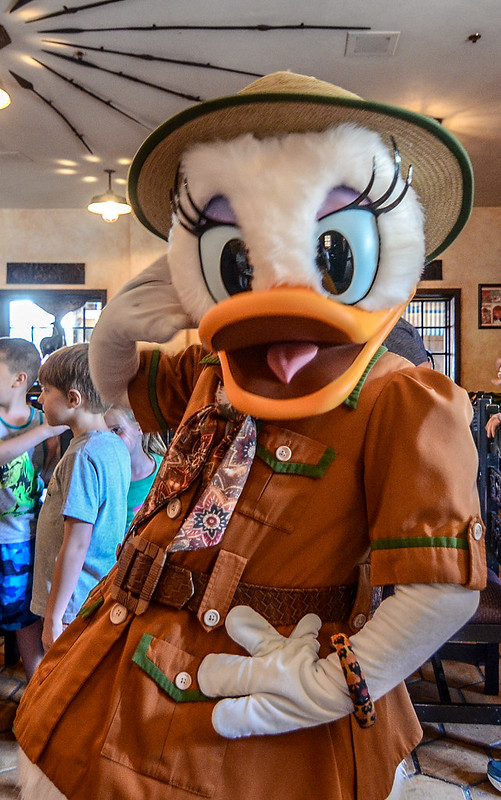 Have you tried Tusker House Restaurant? Let us know your thoughts or any questions you might have in the comments below. Planning a trip to Walt Disney World? Check out our Disney World Trip Planning Guide to help you out. If you enjoy what you are reading here on Wandering in Disney please share this post with your friends, as well as like our social media pages. You can also subscribe to the blog via WordPress or email. All of those links are on the right side of this page. Thank you for reading, we really appreciate it!