If you missed the first installment of our trip report, click here.

We started off Saturday morning fairly early at Disney Springs as we were doing family photos.  Their was a photographer in the area that we hired for an hour.  This sort of thing is somewhat frowned upon in the parks but doing it at a resort or Disney Springs is fair game.  Parts of Disney Springs are fairly picturesque at this point, so it was a decent spot for photos.

Being in that area in the late morning was somewhat odd.  We don’t spend a bunch of time at Disney Springs in the first place, much less during the day.  Usually it’s more of a spot we head to at night after the parks close.  Going here in the morning was a nice change.  The area wasn’t crowded and fun to walk around.  After photos, Melissa and I shared a burger at D-Luxe Burger.  We’ll have a review before long but we both thought it was excellent.  Not only has Disney Springs improved in the table-service department, there are quality options as far as counter-service goes too. 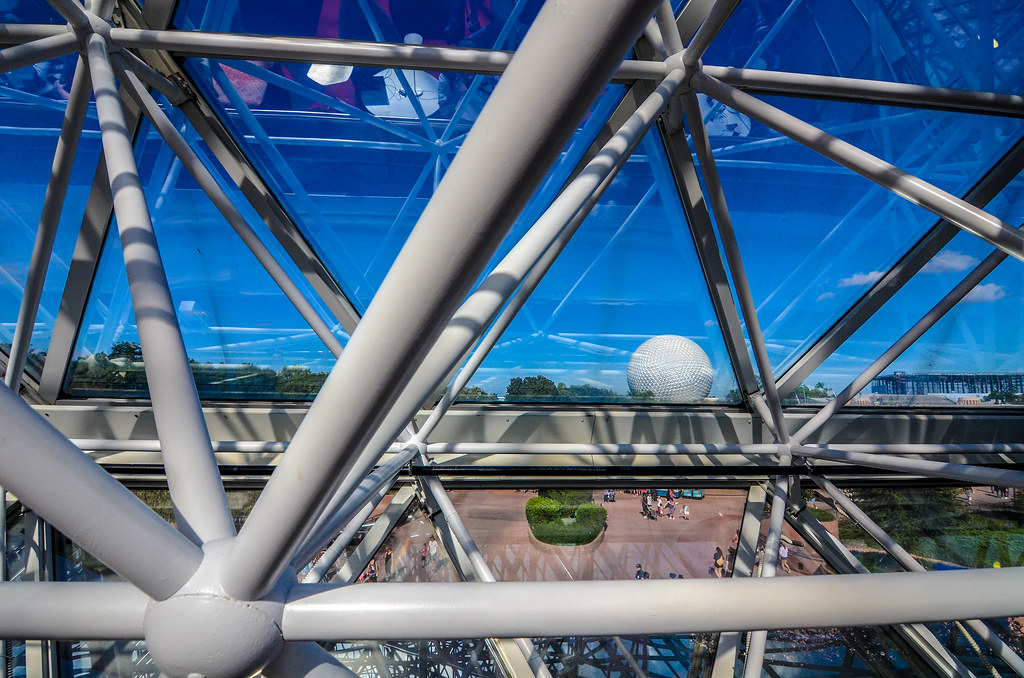 We went back to the resort to change before heading off to Epcot for the afternoon and evening.  This was our first trip to Disney World as DVC members so we were eager to try out the Imagination Lounge.  While no one should buy a membership for the perks, we’d be lying if we said that the perks didn’t matter to us.  The lounge didn’t disappoint and we will frequently visit the area in the coming years.  Having a cool place to relax, get a snack and cold drink is a huge bonus for us at the park.  Again, it’s not the reason we bought into, or why anyone should buy into, DVC but it’s a fun addition to our touring habits.

Melissa and I had left for the parks before the rest of our group.  Eventually we met up with everyone at the entrance of World Showcase and headed off to redeem our Frozen Ever After FastPass.  I don’t love this attraction but this was the first time I had been on it and everything seemed to be working.  It looked good.  There are still a few too many blank spaces in the attraction for it to be a top-tier ride but this was the most enjoyable ride through that I’d taken. 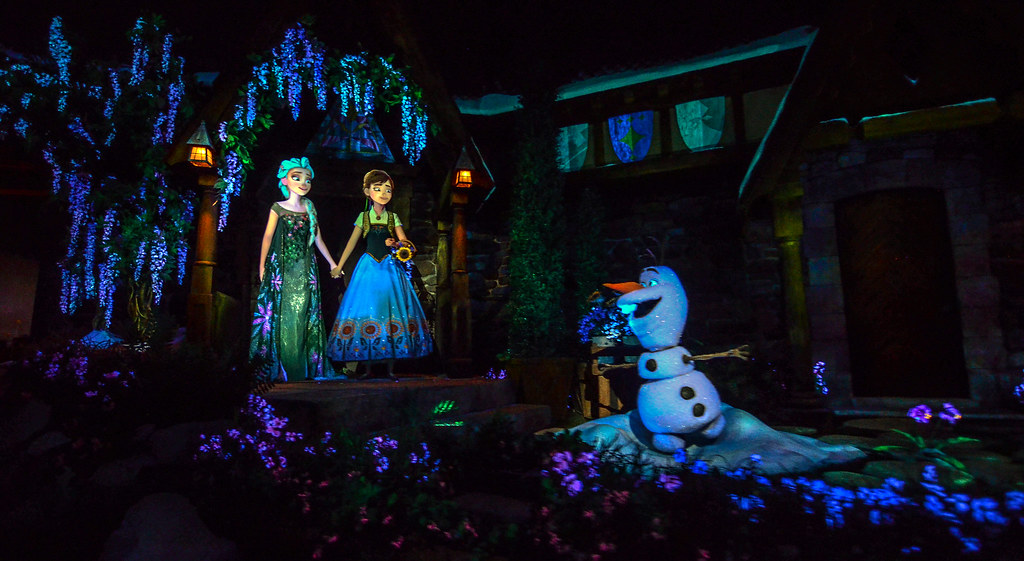 Our next few hours were spent walking around World Showcase.  Like the previous day, the crowd levels were incredibly high and it was hard to accomplish much combining that with our big group.  We did stop by the Train Village in Germany for a bit and our nephews were absolutely fascinated with those.  They could have watched the trains all day and been happy.

Along the way we also tried a few a couple of items from the festival booths.  Epcot’s Festival of the Holidays is the least interesting, in my mind, of all the Epcot festivals but it still added a few good options.  We enjoyed the few items we tried at the booths, although none of them were exceptional or a great value.  I do like the special entertainment offered throughout the pavilions but most of that was happening before it was part of a festival so I hesitate to include it in a review.  My hesitation in calling the Festival of the Holidays a success comes on days like the one we visited, where there are mass crowds and I wish the walkways were slightly clearer.  I’m not entirely sure it’s worth the hassle but the offerings were solid. 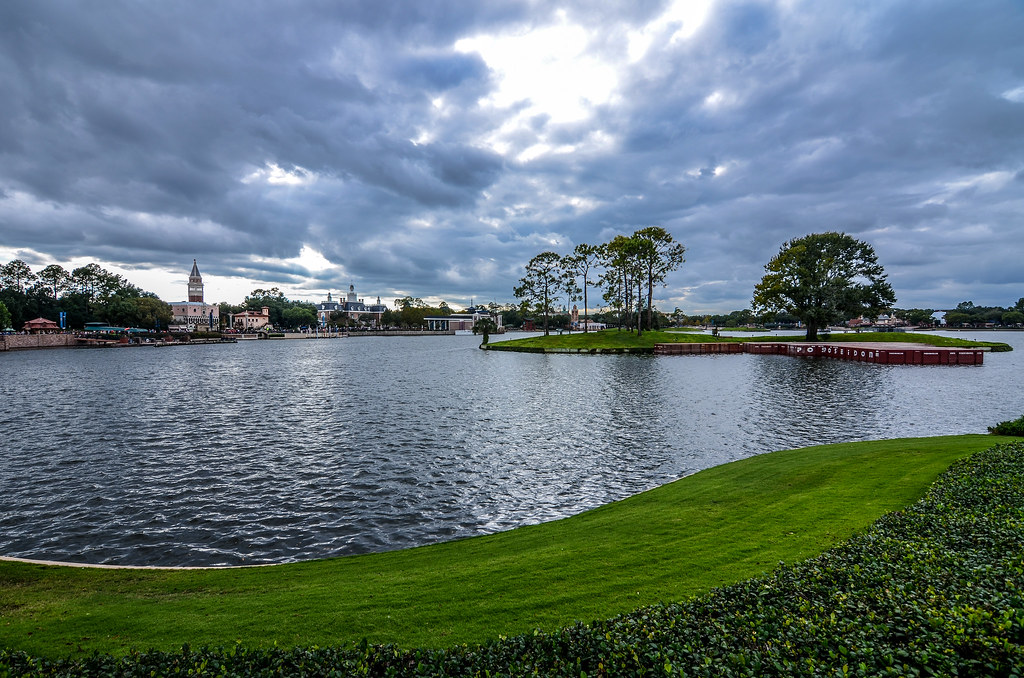 Eventually we made our way around World Showcase and over to The Seas.  We had an unneeded FastPass for the Nemo ride there and then spent a little bit of time in the aquarium watching the dolphins.  Shortly after, we headed to Spaceship Earth for our last FastPass of the day. 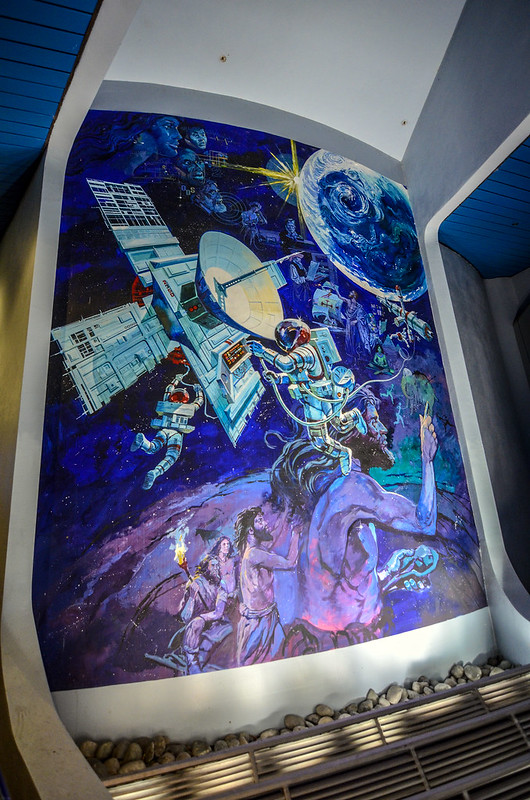 Sylas, my brother-in-law, accidentally put the narration in Portuguese which made for an interesting ride as they were in the seat behind us.  I hope once Disney starts work on the central spine of Epcot that there are some tweaks to Spaceship Earth.  While I love the concept of the attraction and parts of the current version, it is due for an upgrade and new narration.  The end of the attraction could use some work, as well. 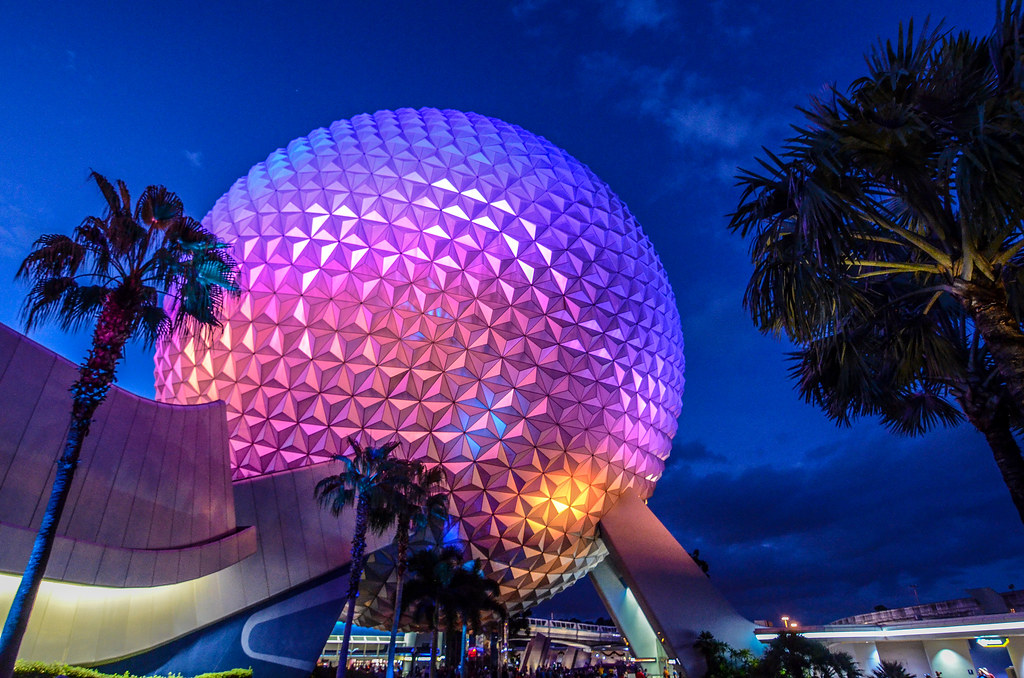 In the end of the day, as long as Spaceship Earth still looks like this then I won’t complain too much.  After our ride, a few from our group left and we headed back into World Showcase for some dinner at Katsura Grill in Japan.  We’ll have a review shortly but we did really enjoy the Udon.  The evening had gotten a little on the cool side so having something warm was nice.

After dinner, more of our group left and we were down to Melissa, me and my other brother-in-law, Josh.  We had a good couple hours that included Test Track’s single-rider line and catching the end of Illuminations.  Test Track was fairly frustrating in that the wait was longer than anticipated.  It became even more frustrating when we got inside and saw that they weren’t using all of their loading stations.  Capacity issues are a problem at Disney World, especially on busy days and my biggest pet peeve currently is to see them not loading a ride to capacity because they want to save a few bucks by being understaffed or cutting operation costs.  Compared to Tokyo Disneyland, where we saw them loading every row and station all trip during a quiet time of year, Disney World is pretty frustrating.  This is a fairly minuscule pet peeve in the grand scheme of things, but combining this with price increases does take its toll on the loyal fans.  Test Track was one of a few instances where we saw this issue throughout the busy holiday weekend.

Now that the rant’s over, this was my first time (at least that I remember) seeing the holiday tag on Illuminations: Reflections of Earth.  On that night, they ran the full version (unlike a subsequent night in the trip) and it was glorious.  The pyro is no doubt impressive and the highlight of the show, but the narration and soundtrack is beautiful and moving.  It’s a perfect addition to a thoughtful show and I hope it will be a part of future Epcot nighttime spectaculars. 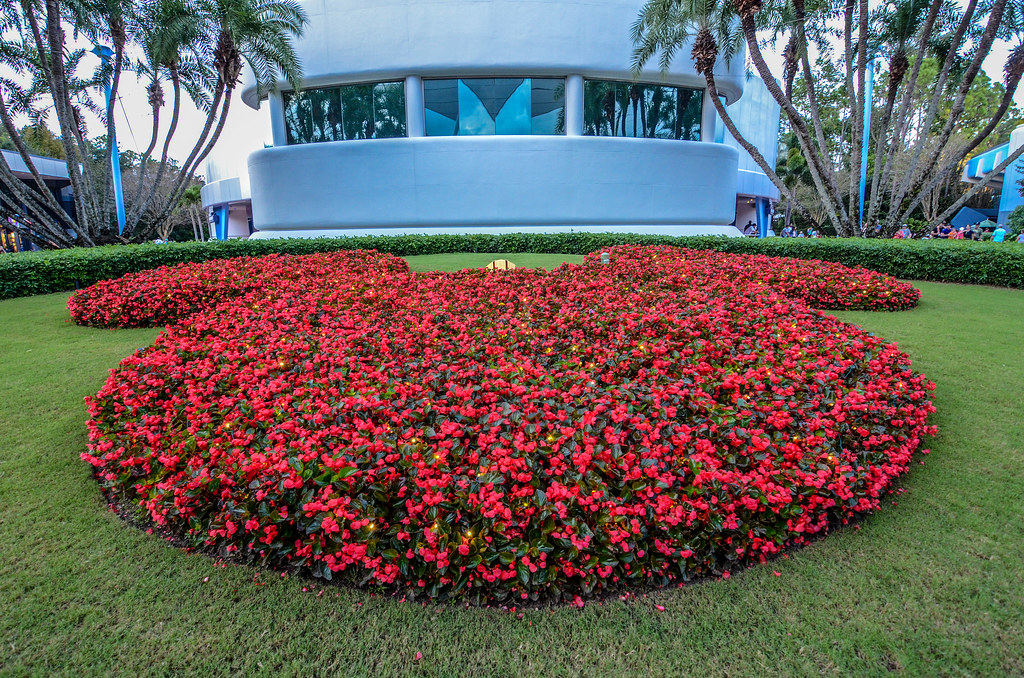 Thinking back on the day, we weren’t able to accomplish much in Epcot considering we spent most of the afternoon and evening there.  I blame the crowds more than anything, along with our hesitation to wait in line for anything.

We took a bus back to All Star Sports because the line was short and the bus was already there.  It’s a quick walk over from that hotel back to All Star Music.  We ended up sharing a piece of pizza, which was surprisingly good, and I took a few photos around the hotel since it was our last night there. 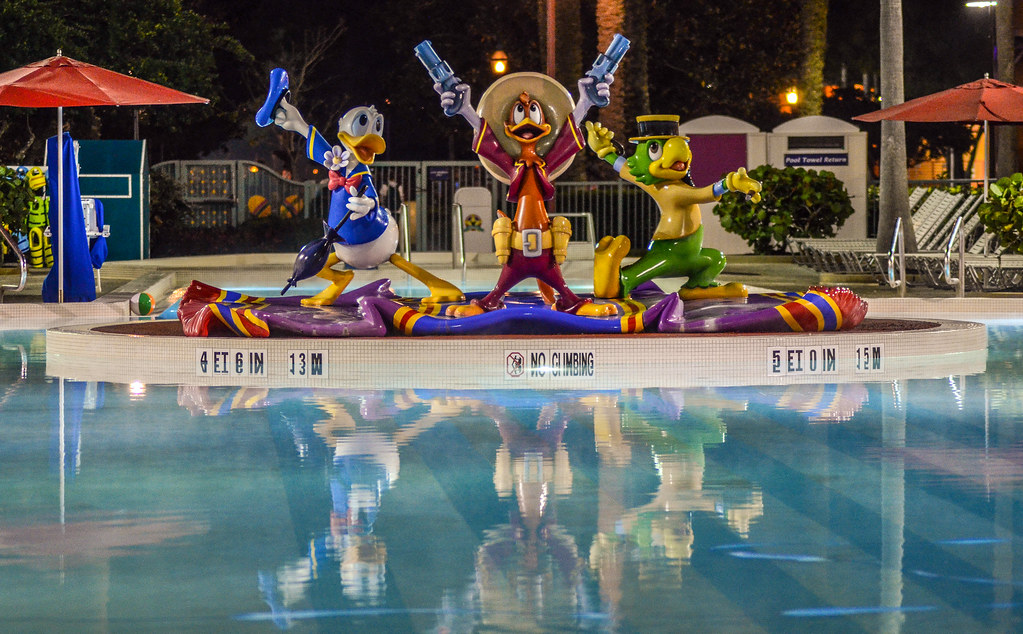 The Three Caballeros make any pool worth swimming in.

As I mentioned, we were checking out the next morning.  Most of our party didn’t have a park ticket for that day so the morning was fairly relaxing before checking out and heading towards Disney Springs.  Later in the morning we had our brunch reservation at Homecomin’, which we reviewed earlier this week.  The meal was delicious and we are eager to go back for dinner.

After brunch we shopped for a bit before catching a boat over to Old Key West, our hotel for the remainder of our stay.  This was the first time we’d stayed at Disney World on rented points, ironic since this was also the first trip we took as DVC members.  I’ll eventually get to a post about renting points for hotel stays at Disney World but it may be our new preference when it comes to vacationing at WDW.

Our rooms weren’t quite ready yet so we played Cornhole for a while by the lobby and then moved on to shuffleboard.  The Hospitality House area of Old Key West is my favorite aspect of the resort.  The area is relaxing and just has a different vibe than most Disney resorts.  Coming to that after staying in the All Star Resorts for a few days was a welcome change. 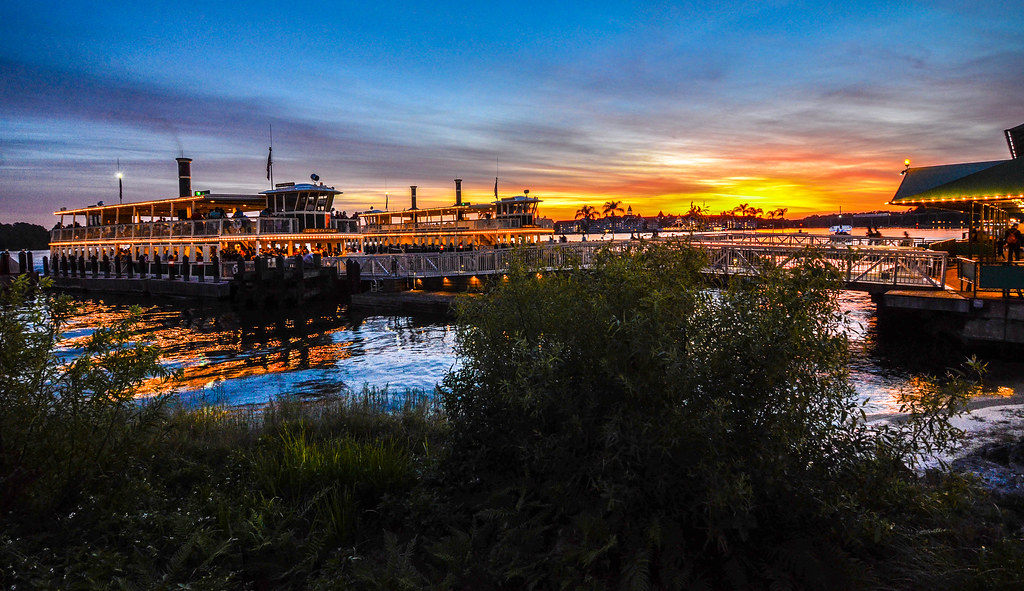 That night we headed to Magic Kingdom for Mickey’s Very Merry Christmas Party.  There was a beautiful sunset as we were getting of the bus.  Unfortunately, we were at the tail end of the beautiful colors when I rushed off the bus, not setting up a very good composition here.  That dumb bush!

I’ve already reviewed Mickey’s Very Merry Christmas Party so I won’t get into it much here.  While we really enjoyed the party, the further I get away from it the more that I think it’s not worth the money.  We’ll likely go again at some point over the next few years but the price tag is steep and the special entertainment isn’t as interesting as the Halloween Party, in my opinion. 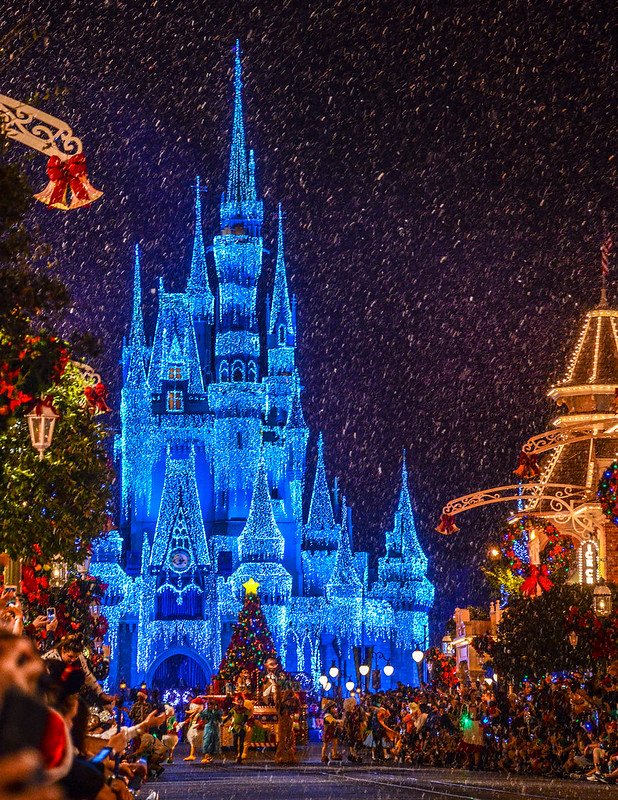 With that out-of-the-way, we did have a wonderful time.  The snow coming down on Main Street is one of those perfect moments that you want to spend with the people you love.  It’s a gorgeous setting, full of excited people who are all there to celebrate the same thing.  That makes for a nearly perfect atmosphere, even though it’s quite crowded.

Watching the fireworks with our family was a special moment too.  My father-in-law loved getting all of the complimentary cookies and soft pretzels, we probably ended up with over 100 cookies combined in our group.  I’m sure there’s some cheesy anecdote about not being able to put a price on memories.  While I’m not sure that applies all the time as we’re generally good at making memories no matter where we are (brag), that’s not a night I’ll soon forget. 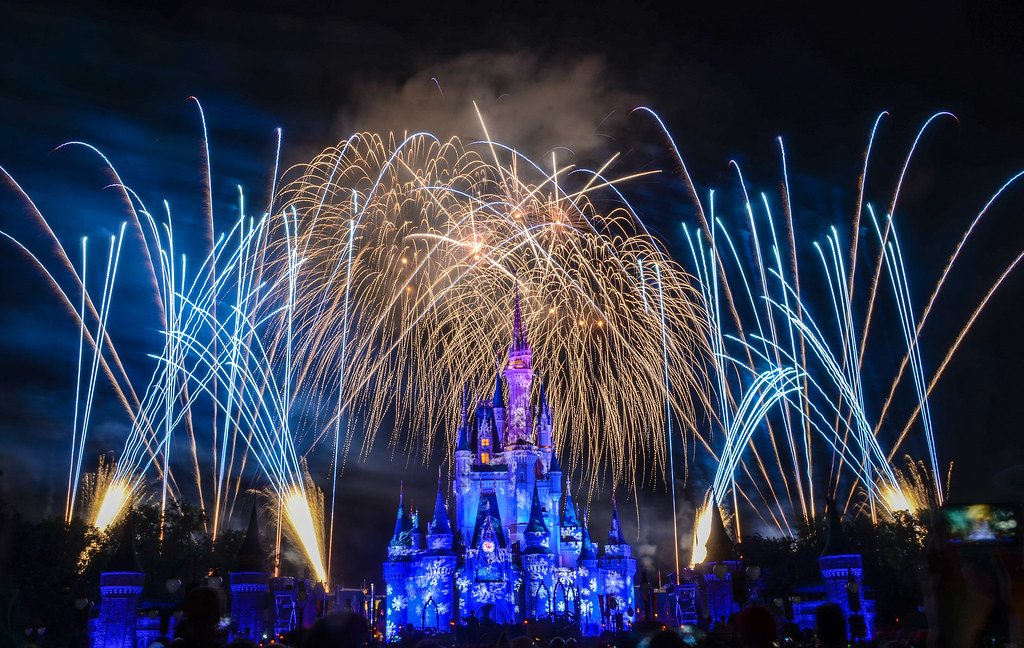 We stayed in Magic Kingdom until well after closing, and I was surprised at how many people were still in the park.  I’m fairly used to be one of the last people out of the parks but I guess with more crowds comes people staying later and later.  I don’t think Melissa and I closed down any of the parks this trip, although we did stay in Epcot quite a while on one of the following nights.  Taking photos wasn’t much of a priority and I usually stay out much later doing that.  Still, on this night it was at least half an hour after close and Main Street was still fairly crowded.  The crowds did start to lessen the following day which I will get to in the next installment!

Part 3 will find us at Animal Kingdom and Hollywood Studios!  Let us know your thoughts and questions on this trip report down below in the comments!  Planning a trip to Walt Disney World?  Check out our Disney World Trip Planning Guide to help you out.  If you enjoy what you are reading here on Wandering in Disney please share this post with your friends, as well as like our social media pages.  You can also subscribe to the blog via WordPress or email.  All of those links are on the right side of this page.  Thank you for reading, we really appreciate it!