Old Key West is a Disney Vacation Club Hotel in Walt Disney World’s Disney Springs area.  As far as categories go, the resort would be considered a deluxe villa.  Being one of the first DVC resorts ever build, Old Key West is often one of the cheapest deluxe villas offered to guests booking hotels.  We recently stayed at this resort and our review will cover that stay. 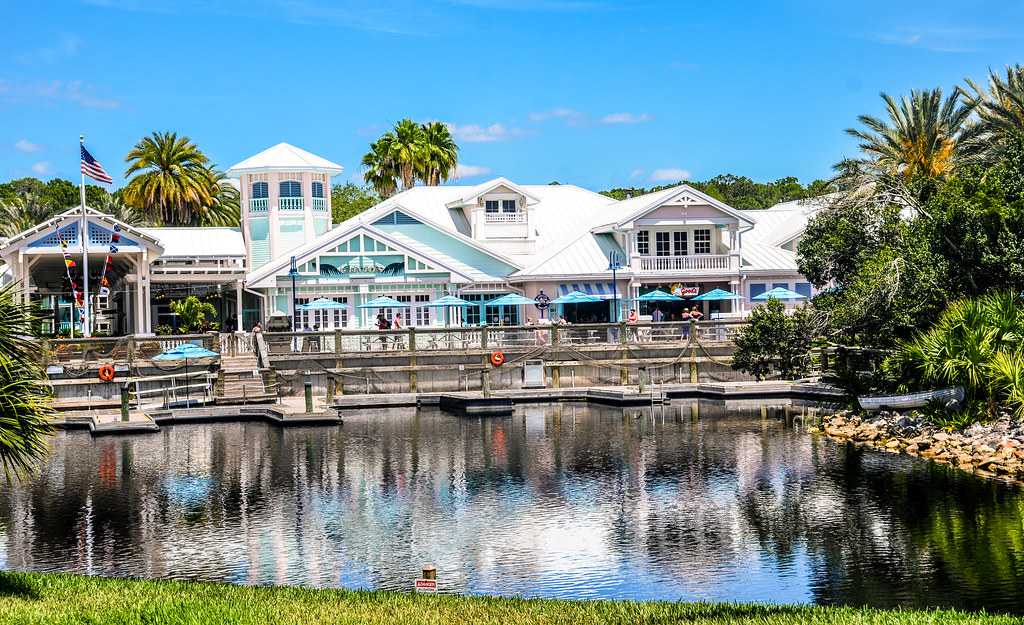 We checked in late one night at Old Key West after spending our whole day in Animal Kingdom.  We had booked a one-bedroom villa for my parents, Melissa and me.  Upon check-in we were informed that we were upgraded to a 2-bedroom villa.  I guess this is as good of time as any to say that it never hurts to ask for an upgrade at check-in.  Be polite and satisfied no matter the outcome but there is no harm in asking.  We didn’t even ask and we still received an upgrade.  The upgrade definitely increased our enjoyment of the resort and probably made this review more favorable (not that it would have been bad in the first place).

Old Key West opened in 1991 and was built as the first Disney Vacation Club Resort.  Back then, DVC had even more of a timeshare feel to it and that is evident in the large footprint of Old Key West’s spacious rooms.  If large rooms are your thing, Old Key West is the place for you.  Every type of room’s (studios, 1-bedroom, 2-bedroom, and 3-bedroom) footprint is bigger than any other Walt Disney World resort.

Let’s take a look around our 2-bedroom villa. 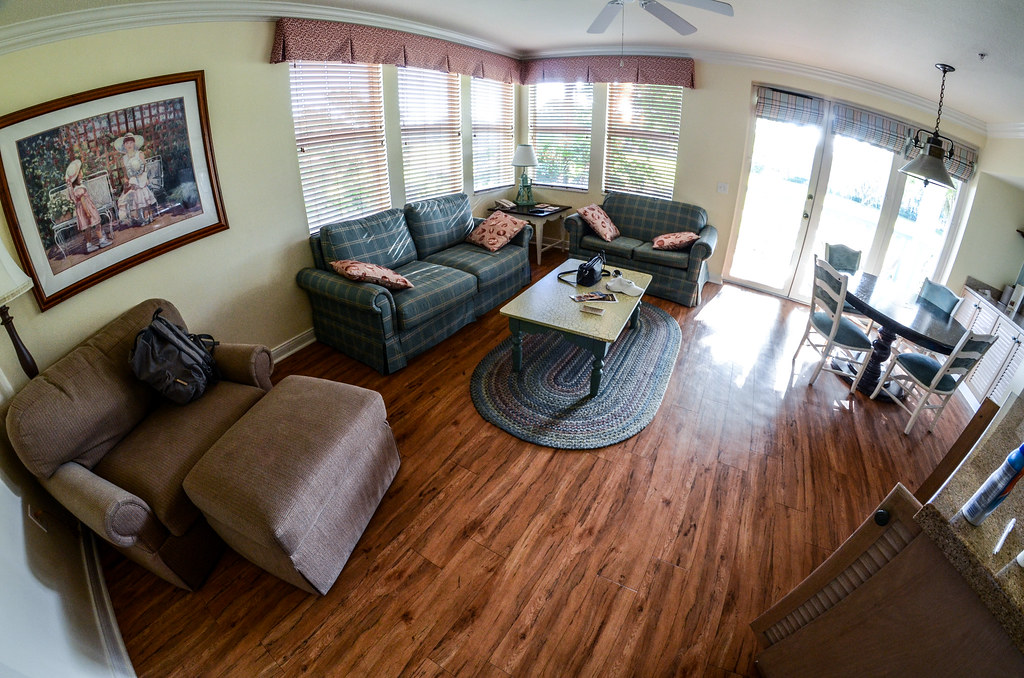 This is the living room and the first room you see when walking in the door of the 2-bedroom villa.  Plenty of seating, as you can see.  The TV is in that cabinet in the bottom right corner of the photo.  Beyond that is the kitchen, which is fairly large especially considering this is a hotel room.  The kitchen has all of the usual appliances and could be a large benefit if you were doing a meal or two a day in the room.  The room may be slightly outdated but I like the flooring and the openness.  There is plenty of natural light. 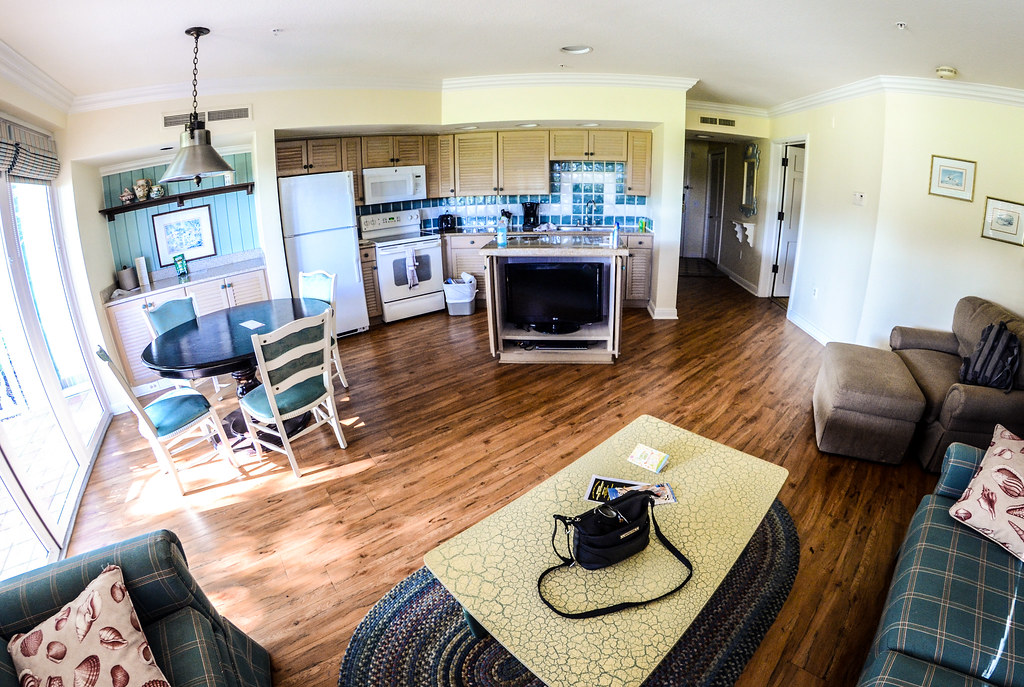 Here’s a view into the kitchen.  The room feels very comfortable to me and has plenty of space even if you had a big group. 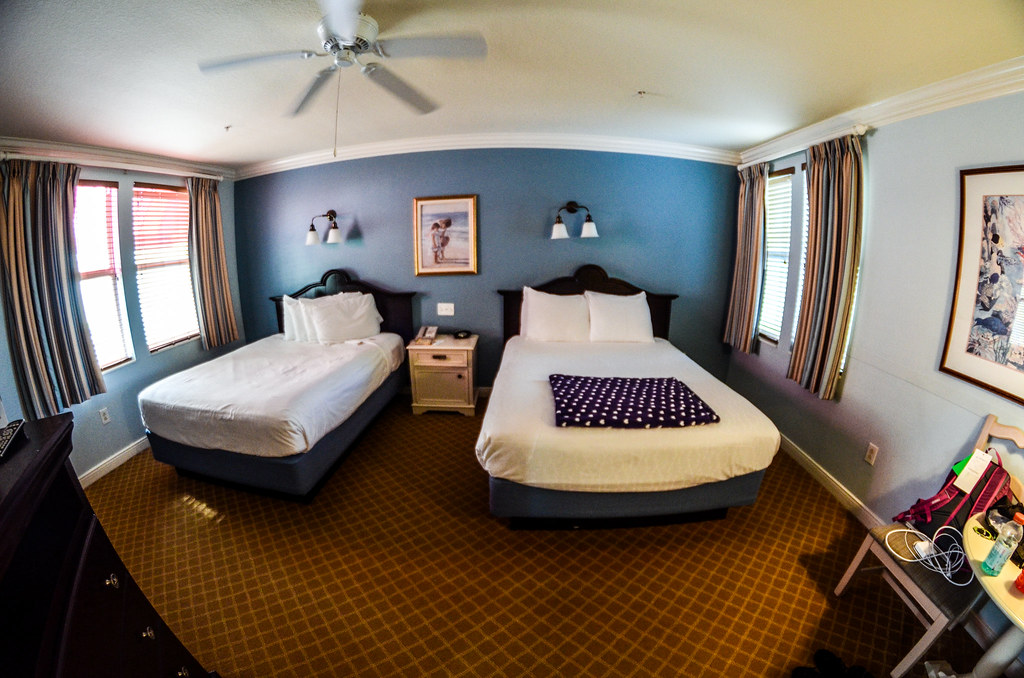 Here is the first bedroom, which is to the left as you enter.  The room almost felt as if it was bragging, with two large closets.  There is a TV on the dresser that I would guess is about 30-inches.  The beds were good enough.  I feel like you only remember beds if they were extremely comfortable or the opposite.  I don’t remember this bed, which is fine with me. 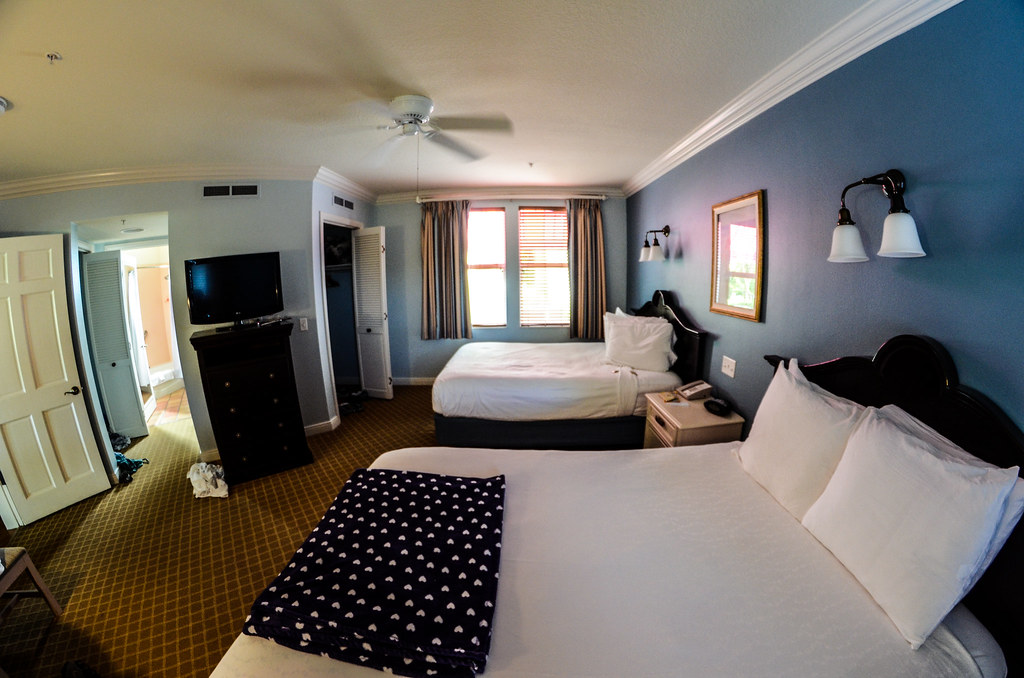 Another view of the room.  The one negative of this room is that the vents didn’t cool the room very well.  I slept with the bedroom door open most of the night as the main room cooled us down much better than the vents in the actual room.  I don’t know if this is common but, obviously, I didn’t enjoy that aspect.  Otherwise the room was great and alone was at least the size of our Pop Century room, if not bigger. 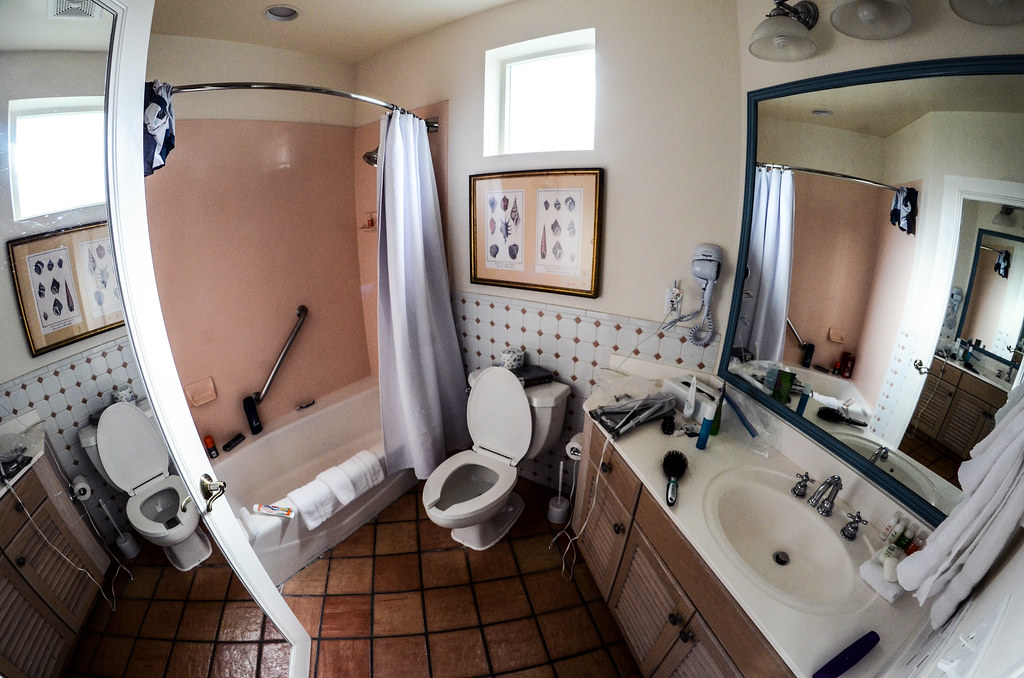 The room connected to a bathroom with a bath/shower combination.  I can’t say that I love the colors of the bathroom but it matches the pastel colors around the resorts. 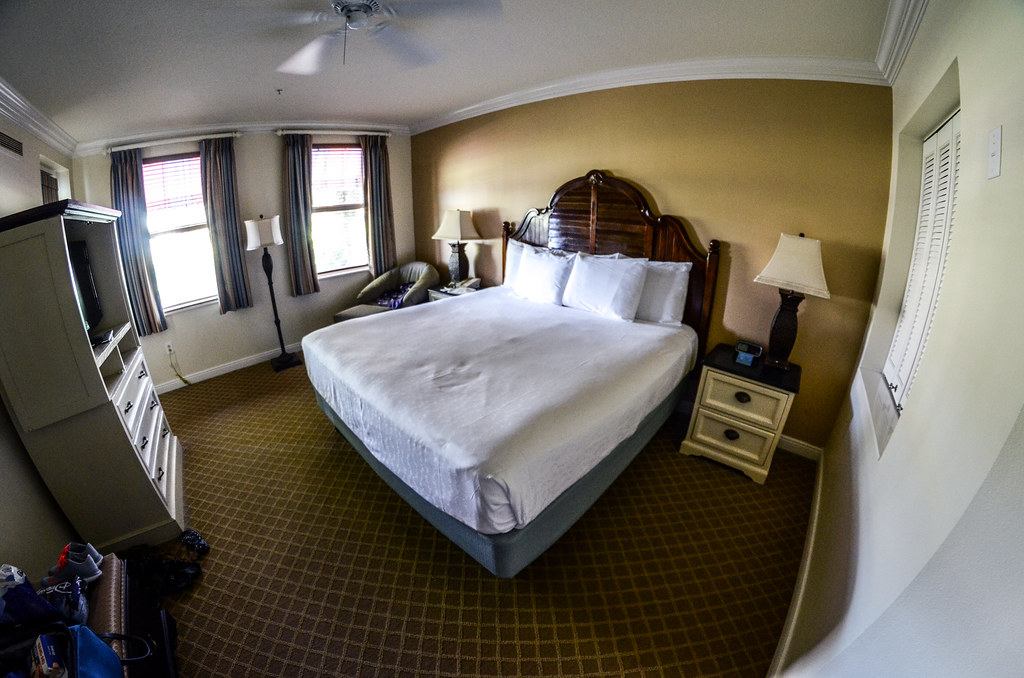 This is the master bedroom.  A king size bed and a slightly bigger TV adorn this room.  While not as big of a footprint as the previous bedroom, I like the use of space here.  The chair in the corner is a nice touch. 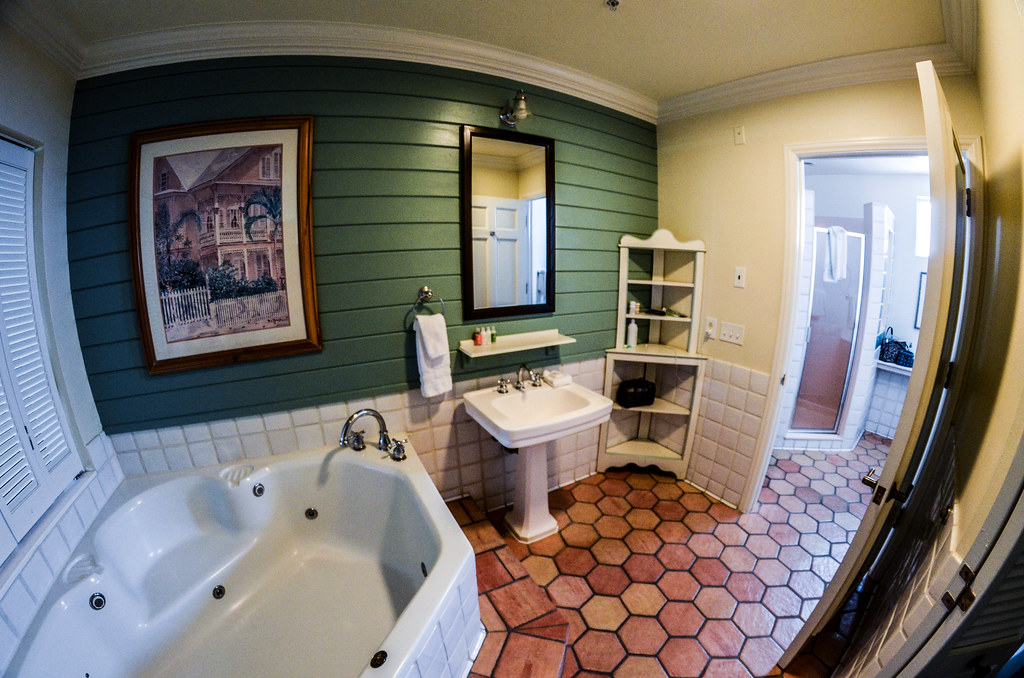 The bathroom connected to the master bedroom is quite nice.  The jacuzzi tub is large and the stand-up shower is equally as nice.  I like the green accent wall there too.  The whole bathroom is nearly as big as the master bedroom and maybe the most impressive aspect of the entire room.

The hallway leading to the master bedroom features yet another closet and a washer and dryer.  For longer stays, this seems like a great benefit. 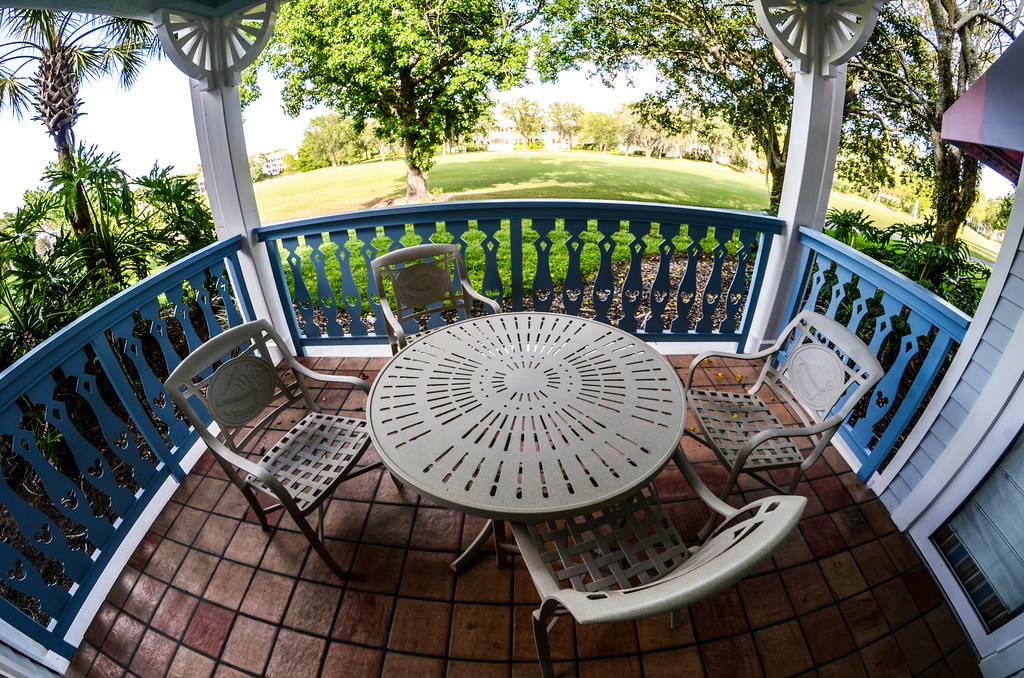 The deck looked out on the Lake Buena Vista golf course.  It also had a ceiling fan hanging above, making sitting outside a little more bearable in the Florida heat.  I really like the blue on the fence there too.

That’s most of the room.  I like much of the design and color palate, especially the blues and greens.  The issues may be the airflow (again, this might not be much of an issue) and some of the decor is outdated.  The room could use a little sprucing up in places.

Old Key West’s amenities are somewhat of a mixed bag.  To start, let’s state the obvious.  Old Key West is on a golf course.  If golfing is going to be a big part of your Disney vacation, Old Key West may score some extra points in your book.  Everything else is a bit of a letdown. 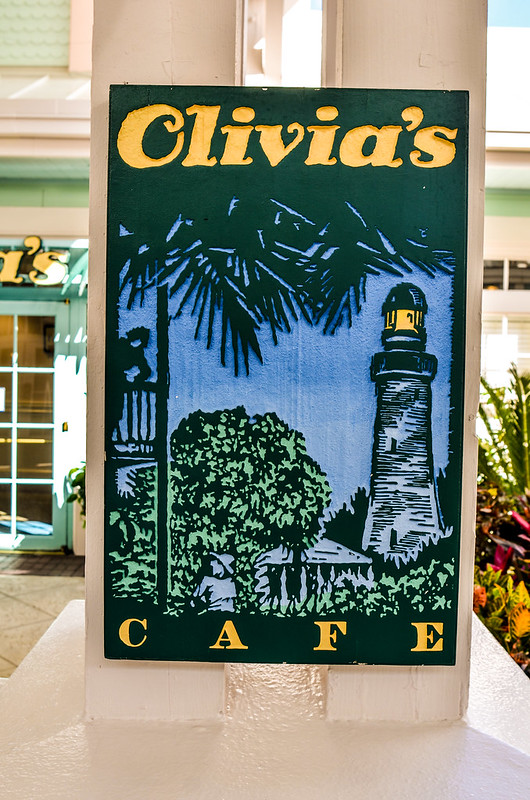 Olivia’s is the table-service restaurant at Old Key West.  We had breakfast here and came away largely unimpressed. 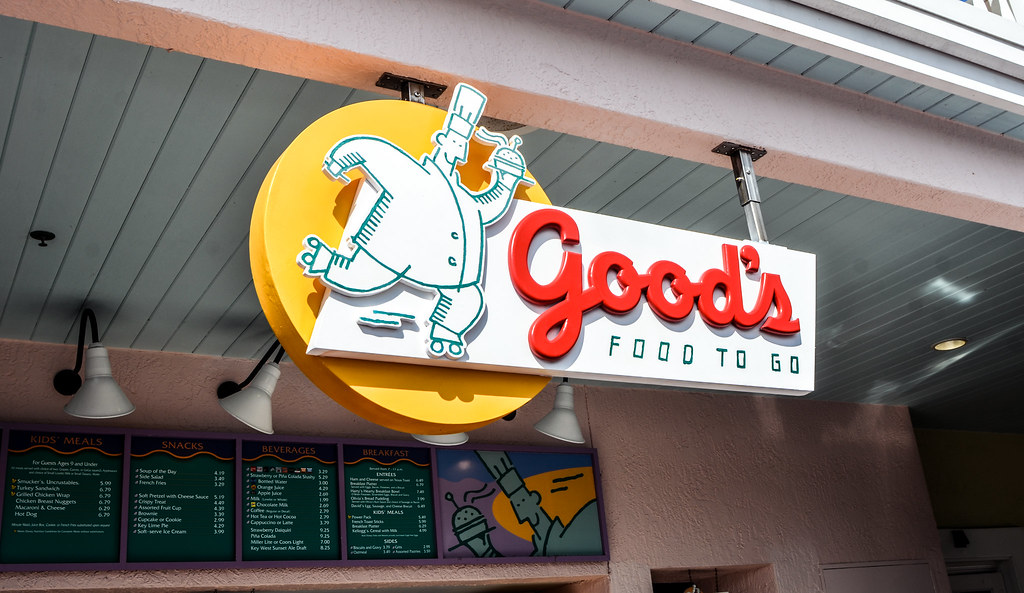 There is a counter-service place that offers American food.  We didn’t eat here but I think it’s odd that this is essentially just a counter to grab and go at.  I’m not sure if Old Key West should be knocked down a peg for this but it definitely isn’t the inviting counter-service areas like the monorail resorts or Animal Kingdom Lodge.

The pool is on the smaller side but has a cool sandcastle slide.  It is more than adequate for kids who love to swim, even if it’s not as impressive as other resorts.  There are several other pools scattered around the resort. 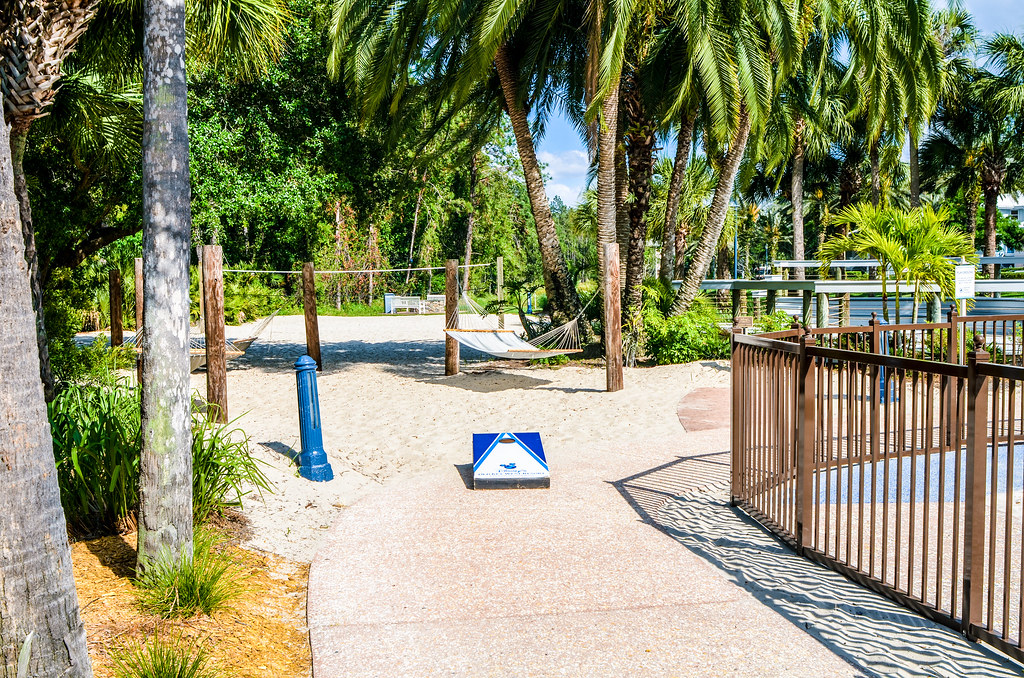 There’s a nice beach area just beyond the pool.  This would be a wonderful place to relax for an hour or two.

Now, for the all important question… Does Old Key West have shuffleboard? 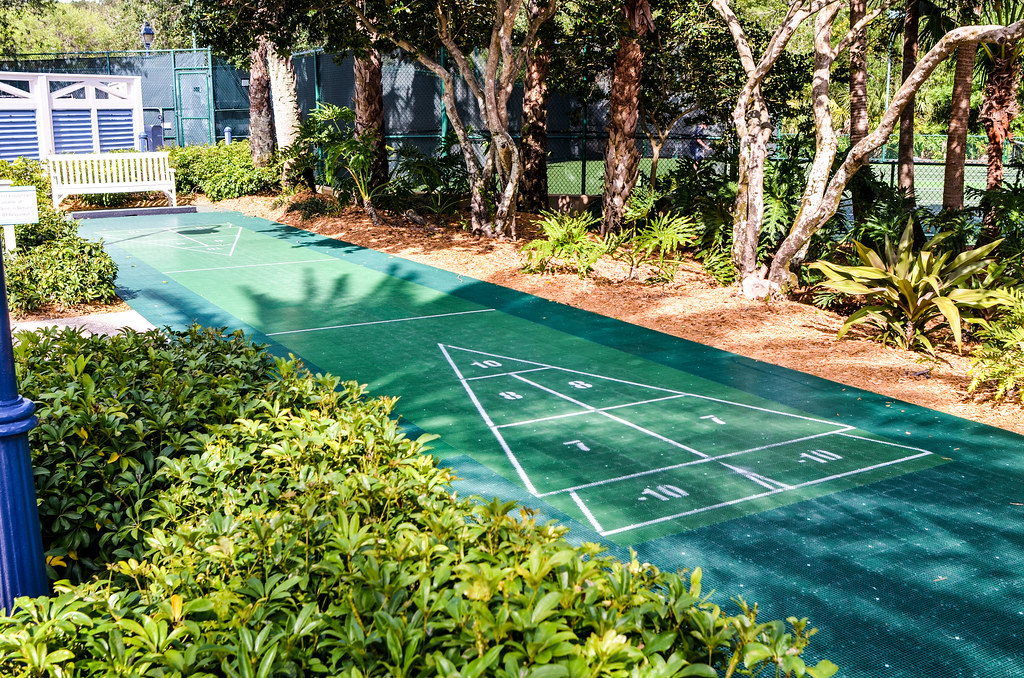 Yes, yes it does.  A resort with shuffleboard is priceless!  Joking aside, Old Key West’s lobby area (Hospitality House) has a nice mix of amenities from tennis courts to Cornhole.  There are plenty of opportunities to have some enjoyable family time.

As far as other things to consider, the resort is large which makes the bus service a little slower than some areas.  Still, there was only one instance of us having to wait for more than 10 minutes for a bus.  Boat transportation is offered to Disney Springs which is a really nice perk if you’re going to spend some time there.  It’s about a 15 minutes boat ride and is very relaxing and enjoyable. 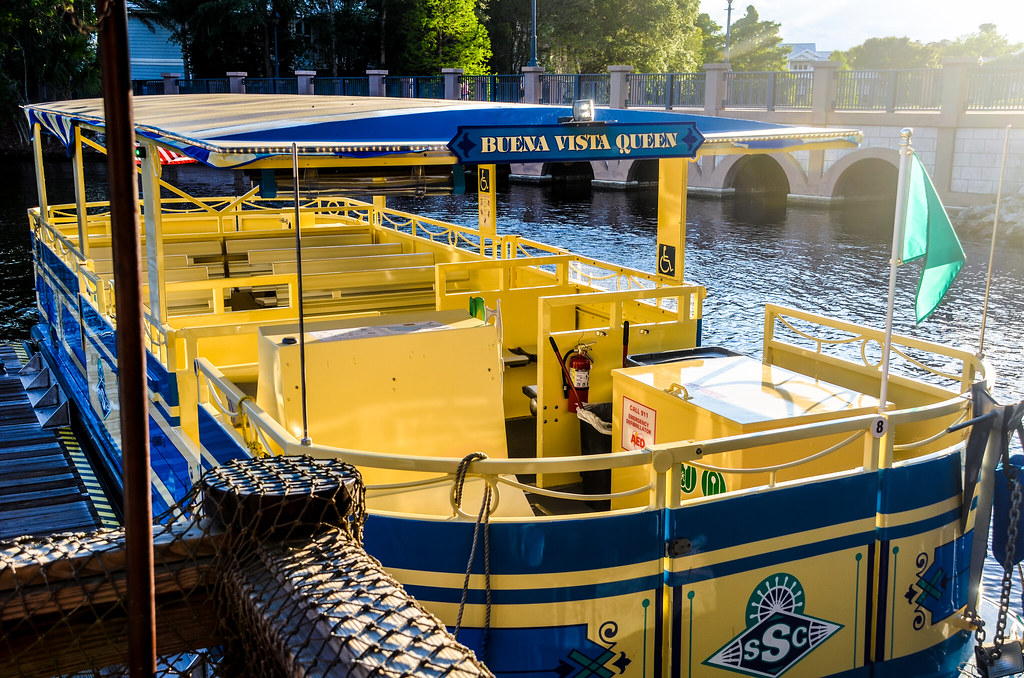 Old Key West’s location is one of the worst as far as deluxe resorts go.  Aside from the aforementioned Disney Springs special transportation, the closest park is Epcot.  No park is an incredibly long bus ride but there is no perk here when it comes to location.

The theming of the resort is still somewhat odd to me in that it’s based off a place in Florida that isn’t far away.  I understand the appeal of a relaxing island but there isn’t much connection to that in the theming here.  What Old Key West really feels like is a nice resort on a golf course.  There is nothing wrong with that, just expecting something more may lead to some disappointment.

While the theme isn’t a major selling point, on our most recent stay at Old Key West I have come around on the environment.  Perhaps coming for a value resort to Old Key West is what really sold me?  This is one of the most relaxing resorts in all of Walt Disney World and I think there’s something to be said for that.  With the spacious grounds, rooms aren’t on top of each other and have a bigger footprint.  Even the Hospitality House laid back, from the boat transportation to family games outside of the lobby.  If theme parks are stressful and wear you out then Old Key West is a nice contrast to that.  I think that relaxing atmosphere is enough to make Old Key West unique and is a decent selling point. 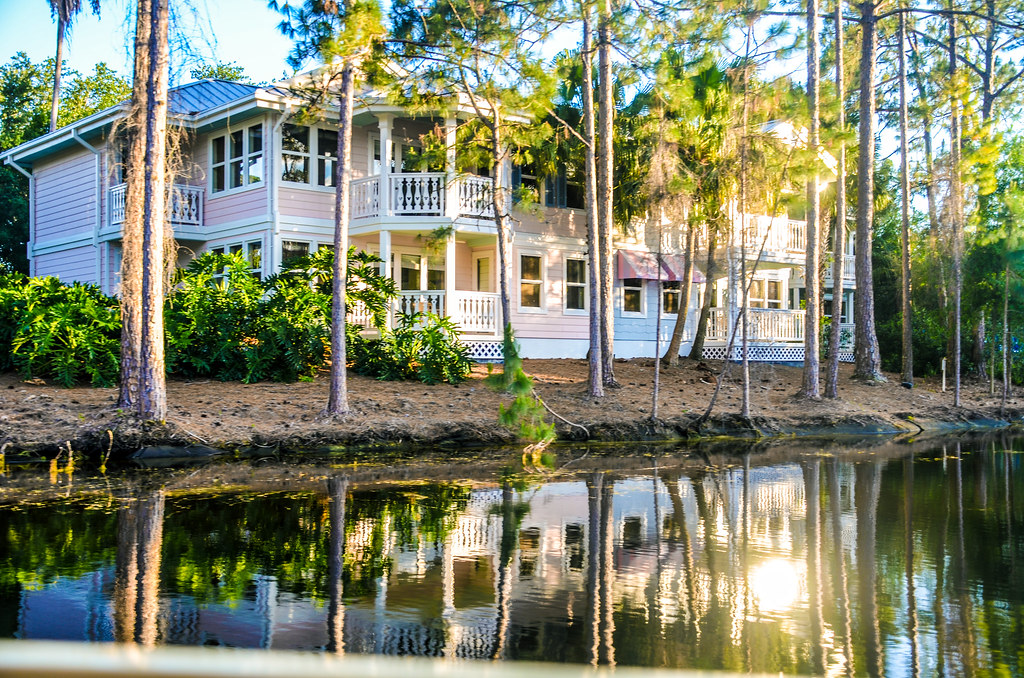 Old Key West isn’t Animal Kingdom Lodge, the Contemporary or the Grand Floridian with their beautiful sweeping lobbies and creativity.  It’s not the Epcot resorts with their elaborate pools, beaches and extraordinary location.  It’s not even Wilderness Lodge with its beautiful grounds.

This hotel is a step below all of those but gifted with large rooms.  Fortunately, it is priced accordingly. 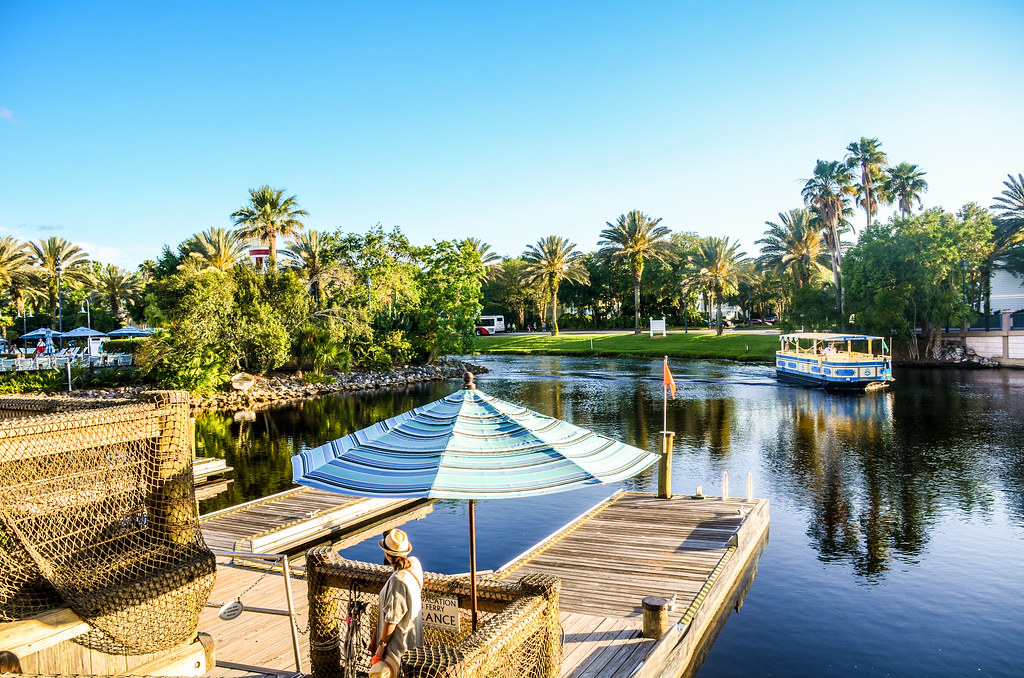 And therein lies the question, is Old Key West a decent value for a Disney World hotel?  We’ll start with the studio, which typically runs at about $200-$300 a night.  Taking into account that we didn’t see the actual room, I don’t think this is a very good value compared to the other resorts.  Animal Kingdom Lodge and Wilderness Lodge often have studios in the $250 range and I would pick the amenities at either of those over this.  Port Orleans is similar, perhaps with more character, and often has a lower price point than Old Key West.

A one-bedroom or two-bedroom at Old Key West is where I think you’ll start to see some value.  If you are going with a group and like to have a little bit of space, I think Old Key West may be a good spot for you.  With a discount, a 1-bedroom can cost under $400 while a 2-bedroom may be found for under $500.  At those prices, these rooms hold value.  Anything more than that and I’m not sure that I’d be willing to pay for a room here.  Exceptions being if you were going to do a lot of golfing or do a lot of shopping at Disney Springs, then you may get some extra value from the location.  One last caveat… If I was looking to book a room for a group of 8, (assuming we all wanted to be in one room) Old Key West’s 2-bedroom villa would be one of the first places I’d look.  The spacious rooms are really a big sell, in my opinion. 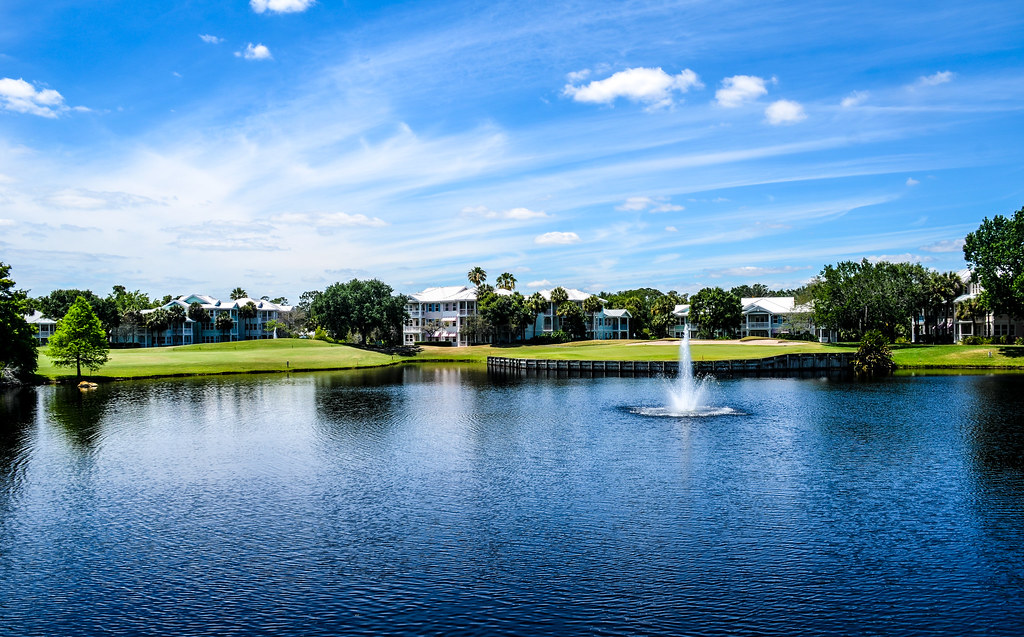 Overall, Old Key West is a relaxing resort.  The amenities are solid.  The rooms are large and look nice.  The grounds are pretty and the environment is one of the most relaxing at Disney World.  Unfortunately, there is just nothing that stands out about Old Key West and, compared to other Disney Resorts, that’s what hurts it when it comes to value.

Have you experienced Old Key West?  Let us know your thoughts or questions below in the comments!  If you enjoy what you’re reading here on Wandering in Disney, please subscribe to the blog and like our social media pages.  You can do both of those things on the right side of this page.  Thank you for reading, we really appreciate it!