Yak & Yeti Local Foods Cafe is a counter-service restaurant in Animal Kingdom’s Asia.  The menu consists of Asian-inspired fare and ranges from $10-$15 per entrée while also taking part in the Disney Dining Plan (as a counter-service credit).  We recently dined at Yak & Yeti Local Foods Cafe and this review will cover that experience along with photos of the food and thoughts on the restaurant’s value.

Animal Kingdom is full of mesmerizing lands and Asia (Anandapur) is certainly one of them albeit different from the beautiful Africa (Harambe) and Pandora – World of Avatar.  Compared to those lands, Asia is a sprawling land with narrow streets.  The portion of Anandapur that Yak & Yeti Local Foods Cafe sits in revolves around Expedition Everest, hence the name of the restaurant. 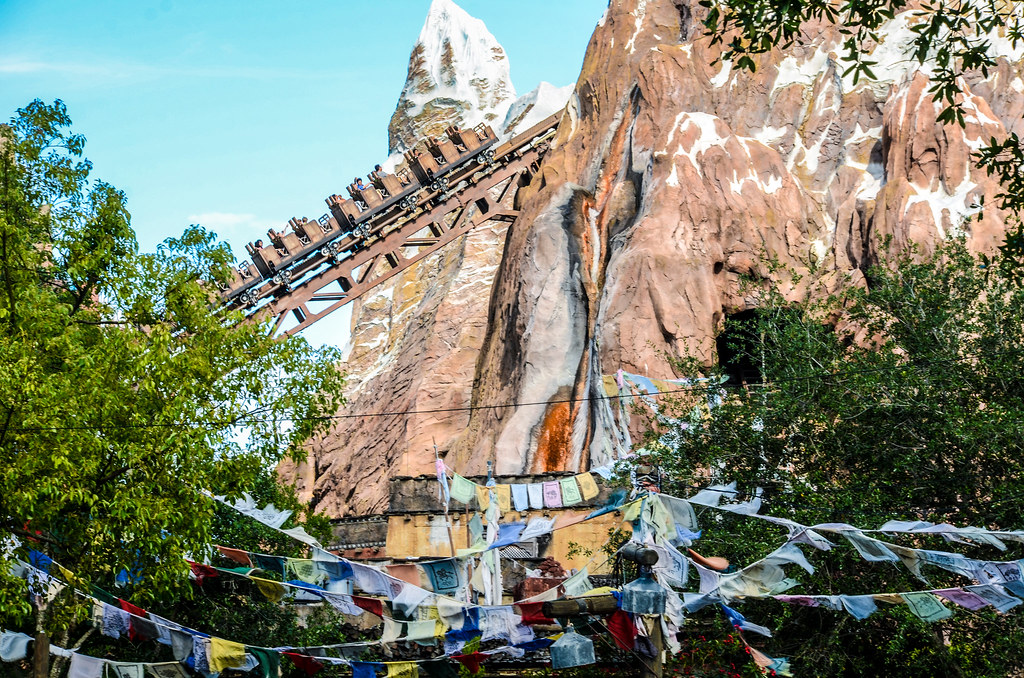 Prayer flags and string lights inhabit much of the area surrounding this counter-service restaurant.  It’s a gorgeous area full of color with seemingly every detail paying reverence to the mountain towering overhead and those who adventure up it.  There are several places to sit throughout this potion of the land.  Along with that, Yak & Yeti Local Foods has seating near the back of the restaurant.  While it doesn’t have the view that other places in the land does, there is a beautiful fountain to sit by and the area is quite relaxing.

Before we move on to the food, I want to apologize for the food photos.  They aren’t up to the usual standard of what I put on the blog.  I don’t have a good excuse, just quite a few bad ones!

As I mentioned, Yak & Yeti Local Foods Cafe serves Asian food including Teriyaki, Korean BBQ, and Indian fare.  They also serve cheeseburgers and hot dogs that they claim are made of Kobe Beef.  I have my doubts on that claim and probably wouldn’t recommend those options.  Yak & Yeti also has a table-service location right next door that is well thought of and serves a similar style of food. 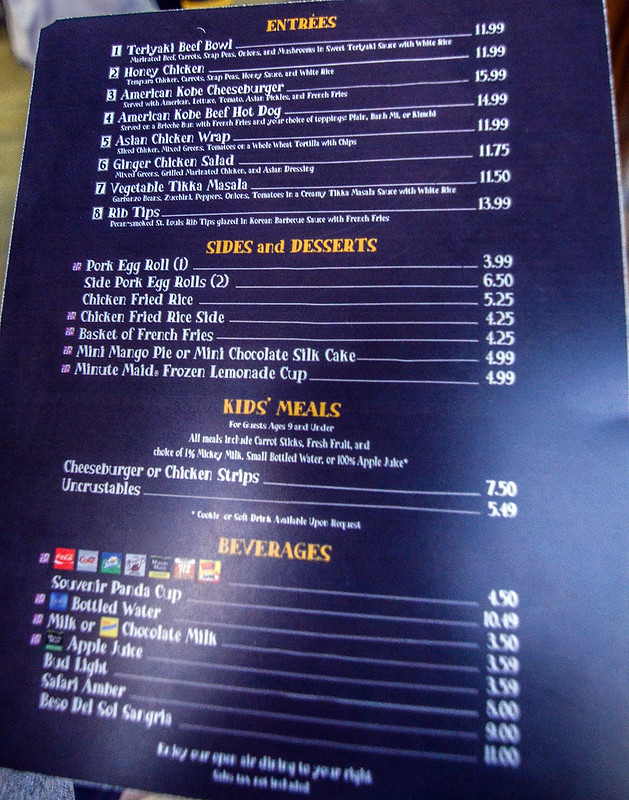 Here’s a look at the menu, or if you don’t want to squint then here’s a link.  As you can see, the entrée prices are all between 11 and 14 dollars, once you take out the hamburger and hot dog.  While that is a bit high, it’s also the reality of a Disney World trip at this point.  With the recent increase in counter-service prices, Yak & Yeti Local Foods Cafe is on the lower side of counter-service restaurants at the resort.

Taking out the price, the menu does have a nice variety.  There are some pretty standard items like Teriyaki and Korean BBQ Rib Tips and more adventurous items like the Vegetable Tikka Masala.  All in all, there are plenty of items I’d like to try on the menu. 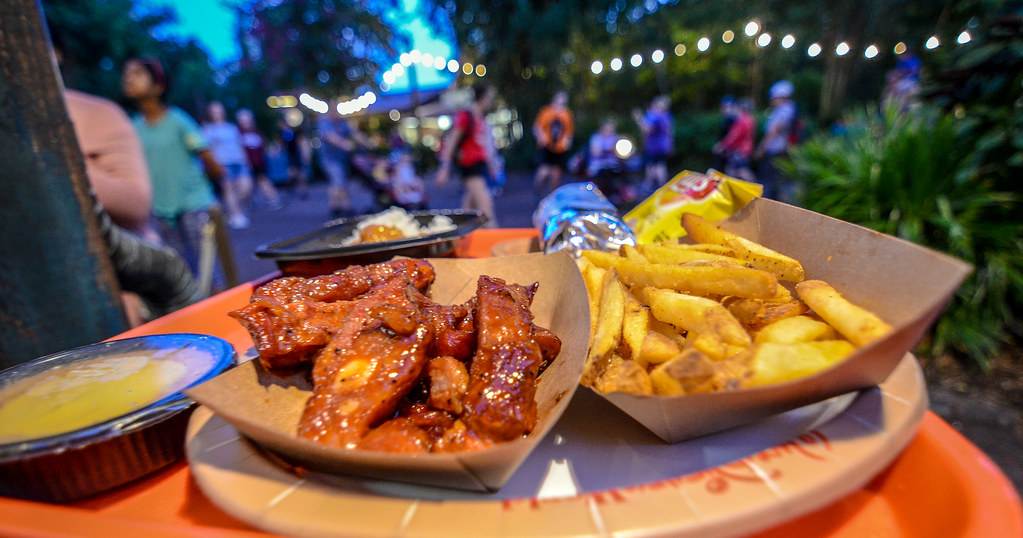 I opted for the Rib Tips.  These were surprisingly good and there was a good amount of them in the dish.  The meat on the ribs was juicy and tender, although there was a piece or two that was a bit too fatty.  Ribs are nothing without the sauce and that was the star here.  This Korean BBQ sauce was somewhat spicy, sweet and different from our typical American BBQ Sauce.  There was a good amount on the dish and it made the meal delicious.  The fries were fine, pretty standard Walt Disney World fries. 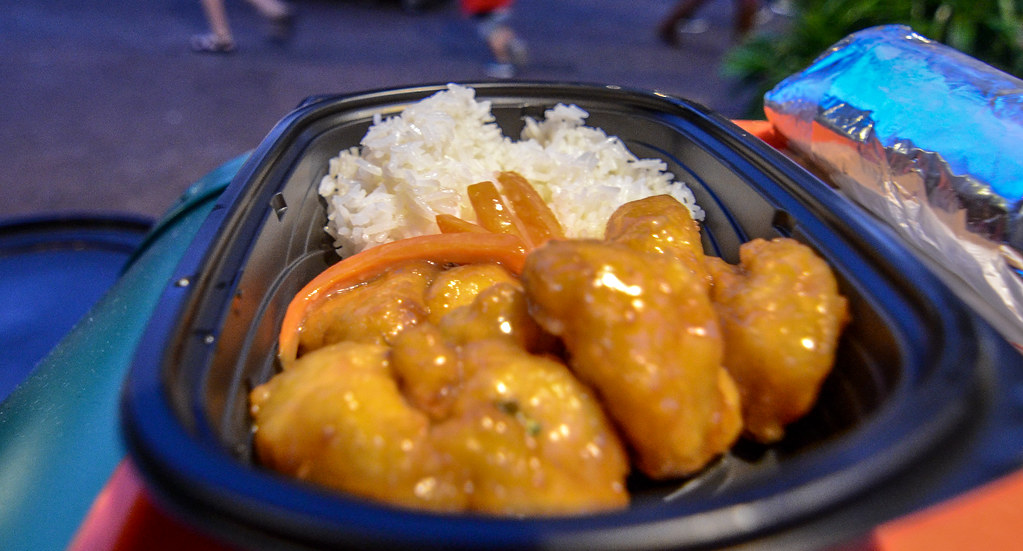 Melissa ordered the Honey Sesame Chicken which came with white rice and a few veggies.  We both enjoyed this although she liked it more than I did.  She compared it to Panda Express’ Orange Chicken, only better.  Depending on your view of Panda Express then that’s either a big compliment or it won’t move the needle at all.  The chicken was well prepared and the sauce sweet but slightly boring.  The rice and vegetables were good but we both would have liked a few more vegetables. 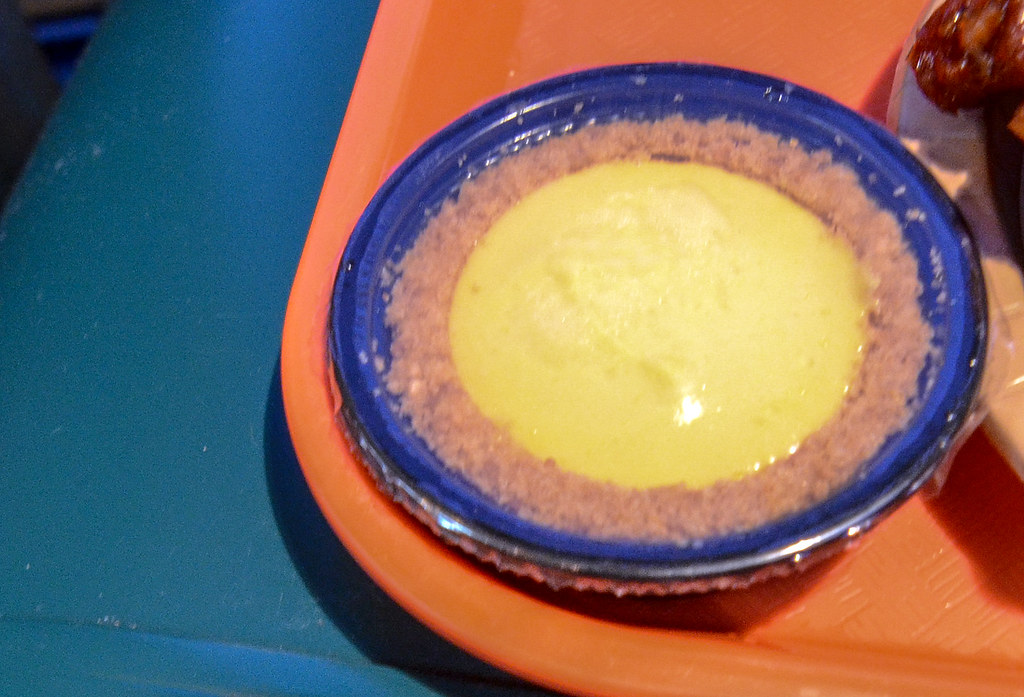 For dessert we ordered the Mango Pie (again, sorry for the bad photo).  This one really surprised both of us as both the crust and filling were exceptional.  I’m not sure if it actually was but the mango tasted fresh and delicious.  The crust was slightly more crumbly than usual, reminiscent of a graham cracker crust.  I would get this as a snack sometime even if I wasn’t having a full meal here.

Overall, Yak & Yeti Local Foods Cafe adds to Animal Kingdom’s very strong counter-service dining.  The restaurant is unique in its offerings, fairly priced relative to theme parks, and has a few delicious options.  While there are better counter-service restaurants in Animal Kingdom, you could do much worse than this place.  Yak & Yeti Local Foods Cafe is also cheaper than most offerings at Satu’li Canteen and Flame Tree Barbecue, two places we ultimately like more.

Have you tried Yak & Yeti Local Foods Cafe?  Let us know your thoughts or any questions you might have in the comments below.  Planning a trip to Walt Disney World?  Check out our Disney World Trip Planning Guide to help you out.  If you enjoy what you are reading here on Wandering in Disney please share this post with your friends, as well as like our social media pages.  You can also subscribe to the blog via WordPress or email.  All of those links are on the right side of this page.  Thank you for reading, we really appreciate it!