Over the past couple of weeks, a few items of note have come out about Tokyo Disney Resort that include a new official resort hotel and an update on the Beauty and the Beast ride and expansion.  In this post we’ll cover both of those announcements and provide commentary on both.

Starting with the hotel, Oriental Land Co., Ltd. announced that a Toy Story Hotel is coming to Tokyo Disney Resort in 2021.  This will be more of a value hotel as compared to the on-site Tokyo Disneyland, Tokyo Ambassador, and MiraCosta Hotels.  Unlike the other Tokyo Disneyland hotel, Celebration Hotel, this new project will be close to the parks.  The new building will be by Hilton Tokyo Bay, giving guests easy access to the resort monorail (via Bayside Station) and, hypothetically, offer some great views of the parks and ocean.  Here’s a look at where the hotel will be located via the exceptional TDR Explorer. 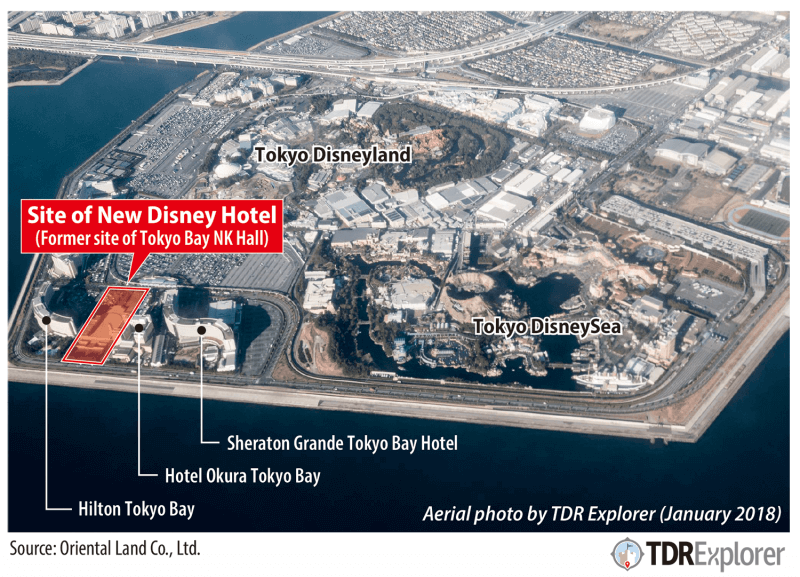 Shanghai Disneyland Resort already has an existing Toy Story Hotel and I would imagine Tokyo Disney Resort’s will be fairly similar.  The hotel will have 600 rooms, adding a fairly significant footprint to the hotel scene.

I couldn’t be more excited about another solid accommodation option coming to Tokyo Disney Resort.  There are numerous choices on where to stay when visiting and adding a hotel in this area will benefit the resort and guests alike.  While I don’t expect over the top theming, Oriental Land Company generally goes above and beyond when it comes to that.

What has me most excited is the location while being at a lower price point than Tokyo Disneyland, Ambassador, and MiraCosta Hotels.  Hilton Tokyo Bay and Sheraton Grande Tokyo Bay Hotel (along with a few other hotels) offer exceptional value for guests with a great location.  I would imagine a new hotel will fall closely in line with the prices of that hotel, although a markup for being new and connected to Disney should be expected.   For those that like the prices of the Hilton combined with a ‘Disney’ place to stay, this could provide a perfect compromise.

With the resort expanding and Japan tourism booming, adding more and more hotels to the area is the right move.  Along with that, more hotels in the Bayside Station area should keep the pricing competitive and give guests more opportunity to find a hotel that fits their budget.  I expect this to be a solid addition to Tokyo Disney Resort.

Moving along to our other bit of news, Oriental Land Company and Disney made waves earlier this week by releasing details (and the video below) about their upcoming Tokyo Disneyland, Beauty and the Beast inspired, expansion.

Work is advancing quickly on the Beauty and the Beast ride, as you can see in the video.  I was blown away by the audio-animatronics featured throughout.  This attraction coming to Tokyo Disneyland’s Fantasyland will combine a trackless ride system with state-of-the-art animatronics meaning that it is right up my alley.  In less nerd speak, the ride has a huge budget (maybe bigger than any ride ever created) and should blow everyone’s socks off.  I won’t go into detail on the video, just enjoy some of the inside looks.

Along with the video a few other details were released on the expansion.  To the bullet points!

Of the news above and disregarding Beauty and the Beast, Fantasyland Forest Theatre strikes my interest the most.  The theatre will seat 1,500 people so it won’t be a small venture.  I don’t think we’ll see the likes of a Broadway style show here but it’s possible.  Ideally, this would house an original show as Tokyo Disney Resort has thrived with their original entertainment.

The Baymex and Minnie announcements/updates are fine but not super interesting.  I enjoy the “whip” ride system and think it will be a solid addition to the park.  Having a Baymex ride that doesn’t go up in the air is a little strange though.  Likewise, Minnie’s Style Studio isn’t really for me but I think it will be executed well and be better than the typical meet & greet.

Currently, Tokyo Disney Resort is in the midst of massive expansion.  Along with the news today, DisneySea has begun progress on a massive expansion that includes another hotel.  The resort is growing and all of the changes are, at the very least, interesting.  We’ll have more updates as news comes out.

What do you think of the latest Tokyo Disney Resort news?  Let us know in the comments!  If you enjoy what you’re reading please subscribe to the blog and like our social media pages which you can find on the right side of this page.  Thank you for reading, we really appreciate it!