Big Band Beat is a live stage show in Tokyo DisneySea’s American Waterfront.  Held in the Broadway Music Theatre, the show is a Broadway style musical revue that showcases singing, dancing and a few characters.  This post will be our review of the show as well as a few tips on how to see Big Band Beat after the review.

Theme park stage shows can often miss the mark, even when talking about Disney.  It is hard to get top-notch acting, writing and facilities to all come together and present an excellent stage show.  More so, sitting and watching a production for over half an hour can be less appealing when there are thrill rides waiting right outside of the doors.  Stage shows age quickly, especially compared to most rides, so it is easy for a stage show to get behind the times with its references, fashion or music.  Some shows, like California Adventure’s Frozen (and Aladdin before that) have far exceeded expectation and are quintessential experiences to that park.  Others, most anything at Hollywood Studios, show their age and should be replaced or updated.  Big Band Beat stays away from the pitfalls that surround theme park stage shows and surpasses all expectations. 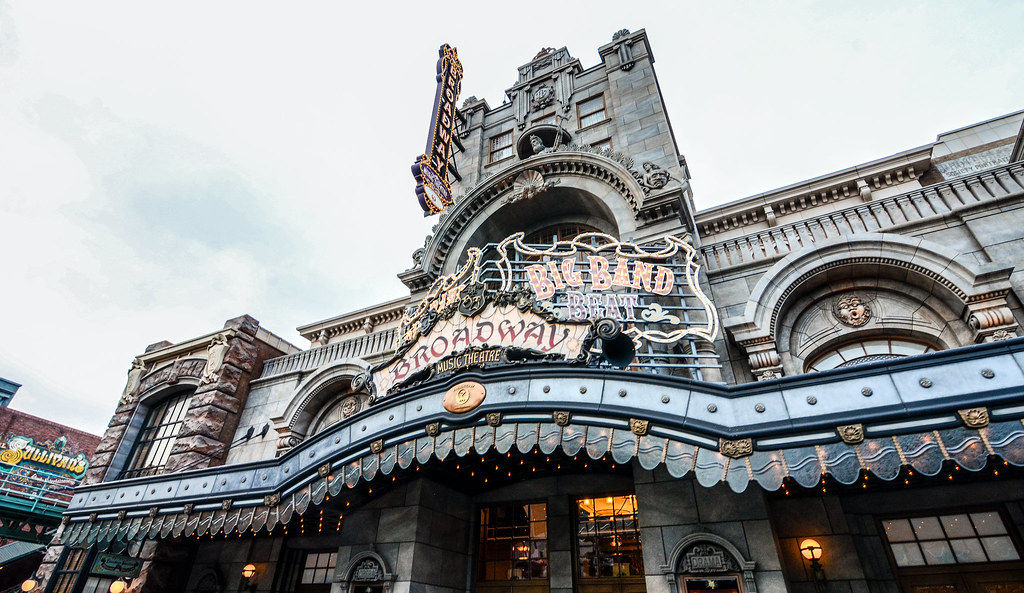 The Broadway Music Theatre is beautiful both on the outside and in.  The outside meshes well with the rest of the American Waterfront, being elegant yet still fitting in with the industrial age New York setting.  The color changes from red brick to gray subtly and the building rises overhead in an inviting way.  The inside of the theatre follows suit, being gorgeous and elegant.  Capacity is a couple of thousand, I would guess, and there are beautiful murals that adorn the walls.  Seating is comfortable, albeit a little crowded, and the theatre can get warm. 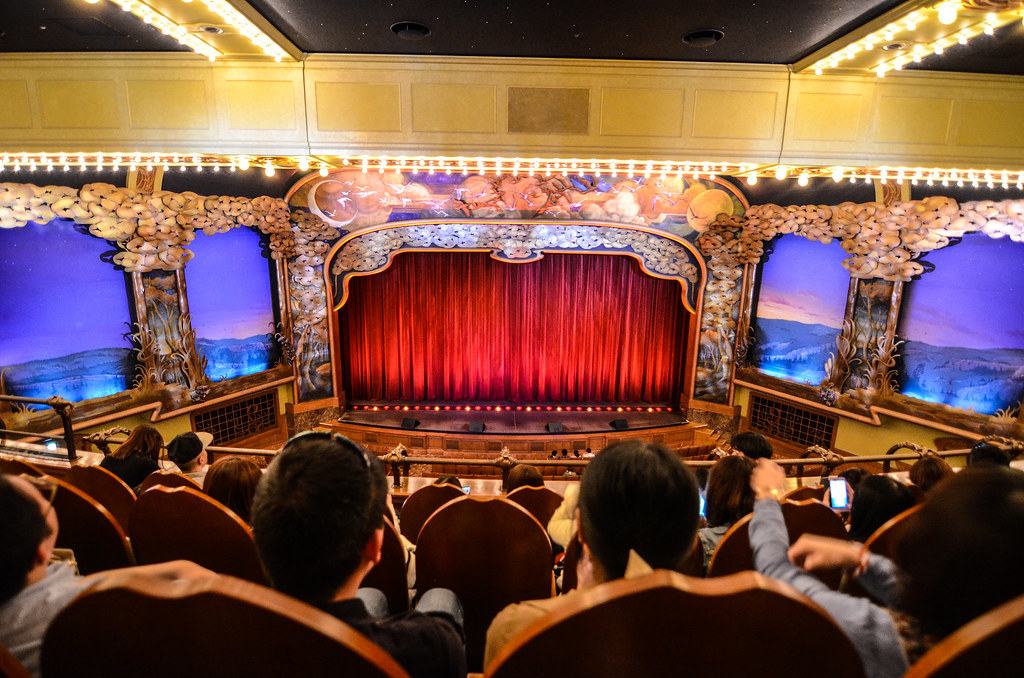 Big Band Beat starts quickly with a few fast-paced swing and jazz songs like “Don’t Mean a Thing.”  The talent is evident from the beginning as is the excellent vaudeville costuming.  Fitting in with the American Waterfront, the whole show is in English.  Even with the language barrier for the locals, the show is absolutely adored.  We saw it multiple times and each time I sat by someone who knew every cue and song.

As I mentioned, there are a few characters that come out through the show headlined by Mickey Mouse.  This is far and away the best ‘character’ performance I’ve ever seen (I think it’s a fairly small sample size) as Mickey tap dances and ends the set by playing the drums.  I can’t imagine how hard of a job that is for someone in a large costume but it is pulled off flawlessly.

Part of Big Band Beat’s appeal is that it doesn’t try to do too much.  The production showcases it’s very talented performer and all of the ‘Disney moments’ or surprises, like Mickey on the drumset, fit in organically with the show.  More than any other stage show I’ve seen, Big Band Beat understands the land that it is set in and both the show and land are augmented by each other.  The singing, mainly done by the two hosts, is spectacular but not overboard.  The costuming fits the early 1900’s and is spectacular without being flashy.  The house is band and arrangements are tight and precise while still invoking a feeling of improvisation that jazz is supposed to have.

As you can tell, I’m over the moon when it comes to this show.  One of my favorite aspects of the show is how loved it is by locals.  Imagine an American Park having a stage show in a foreign language that is one of the most popular attractions in the park.  Frankly, neither aspect of that would happen as Disney wouldn’t be brave enough to do that kind of show as there wouldn’t be a steady audience for it.  That isn’t a shot at Disney but more of a commentary on an American audience as a whole.  That isn’t a perfect comparison, as current Japanese culture is very interested in Americana and many Japanese citizens know some english, far more so than Americans knowing Japanese.  Still, I find the level of sophistication of an audience that sits through half an hour of a foreign language stage show refreshing.

All in all, Big Band Beat is the best stage show I’ve ever seen in a theme park.  The talent is incredible, the show stays within itself while having some iconic moments, and everything about Big Band Beat fits together wonderfully.  This is a must-do attraction at DisneySea and should be a priority for anyone going to that park. 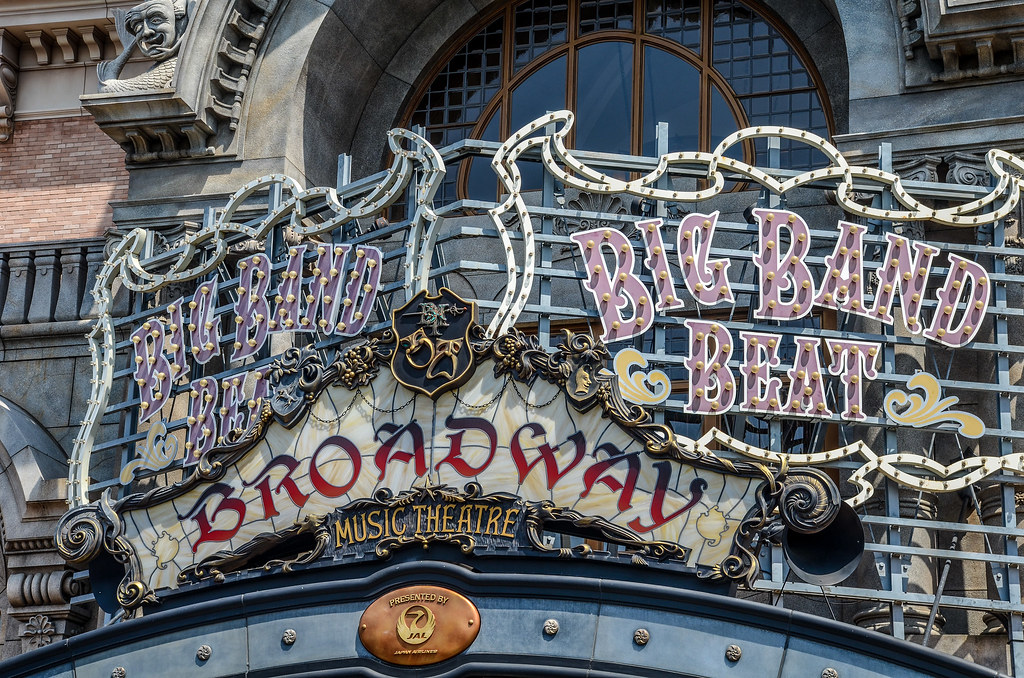 Big Band Beat utilizes a free ticket lottery system for seating at the show.  Guests go to a station that is between Mediterranean Harbor and American Waterfront, near Gondolier Snacks, and scan their tickets at a kiosk.  You must have all of your group’s tickets with you to scan but your group doesn’t have to physically be there.  Once through the easy process, the kiosk’s screen will then tell you if you have won the lottery or not.  Guests may only try the lottery once per day.

If you did not win the lottery then there is general admission seating for each showing on a first-come-first-serve basis.  If that is the route you have to take, I would advise getting to the theatre at least an hour before your preferred showtime.  On that note, the first showing of the day is typically all general admission so that may be the best bet if you didn’t win the lottery.

Do you have any questions or thoughts about Big Band Beat or Tokyo Disney Resort?  Please let us know in the comments below!  If you enjoy what you are reading here on Wandering in Disney please share this post with your friends, as well as like our social media pages.  You can also subscribe to the blog via WordPress or email.  All of those links are on the right side of this page.  Again, thank you for reading, we really appreciate it!