The Tokyo Disneyland Hotel sits right outside of Tokyo Disneyland, less than a five-minute walk to the gates.  This hotel boasts a beautiful Victorian theme and incredible service and style.  It is one of the Tokyo Disney Resort’s four official hotels (with only three actually on-site.)  Our recent trip to Japan had us staying at Tokyo Disneyland Hotel for a few nights and this review will cover that stay along with our recommendation on if it is worth the hefty price tag.

Tokyo Disney Resort is more similar to Disneyland than Disney World in that it is in the middle of an urban area instead of a swamp.  While the Tokyo resort definitely has more room than the Anaheim resort, guests will still be aware of the city (or planes) while there.  This is most noticeable in the hotel situation. 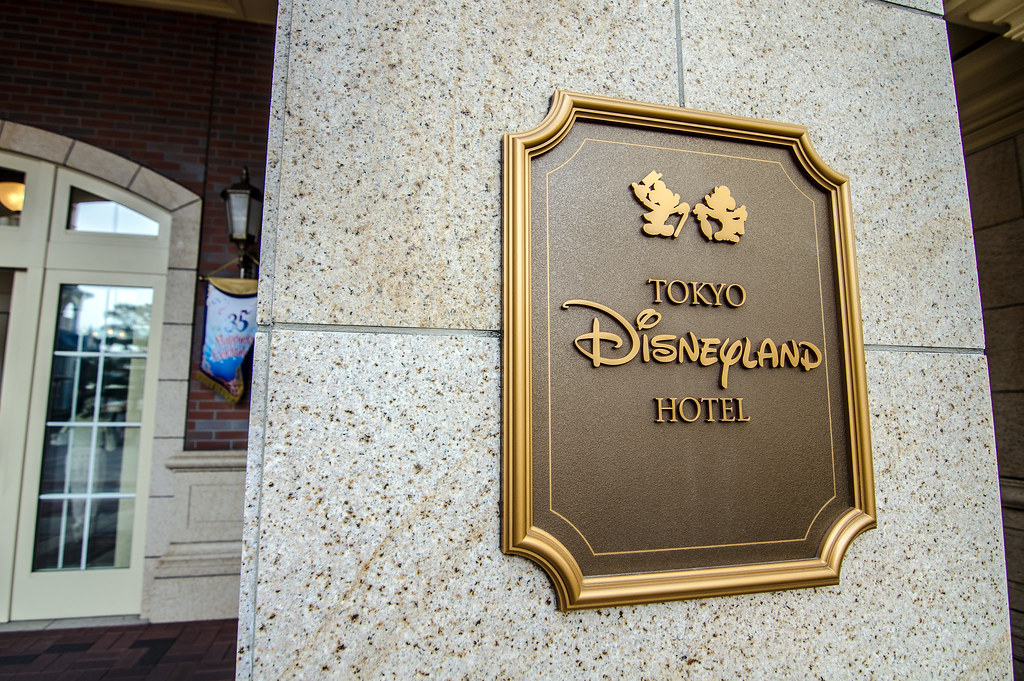 As I’ve already mentioned, Tokyo Disney Resort has three hotels right by the parks in Tokyo Disneyland Hotel, Hotel MiraCosta and the Disney Ambassador Hotel.  There is a fourth official Disney hotel, Celebration Hotel, that is termed as a value resort, about 15 or 20 minutes away via bus.  On top of that, there are a number of high-quality hotels right by the parks including a Hilton and Sheraton.  Many of these are as nice and convenient as a Disney World Moderate resort or even a deluxe.  All this to say, there are plenty of options when going to Tokyo Disney Resort and ones that will fit every budget.

We opted for the Tokyo Disneyland Hotel because of two reasons.  One, we had two couples staying in one room so the price was split in half making it more affordable.  Our second reason came down to it being our first trip to the resort and we wanted to go all out.  While I’ll break it down further into the post, I’m very happy we went this route but will be more than happy to stay at the non-Disney hotels on our next trip. 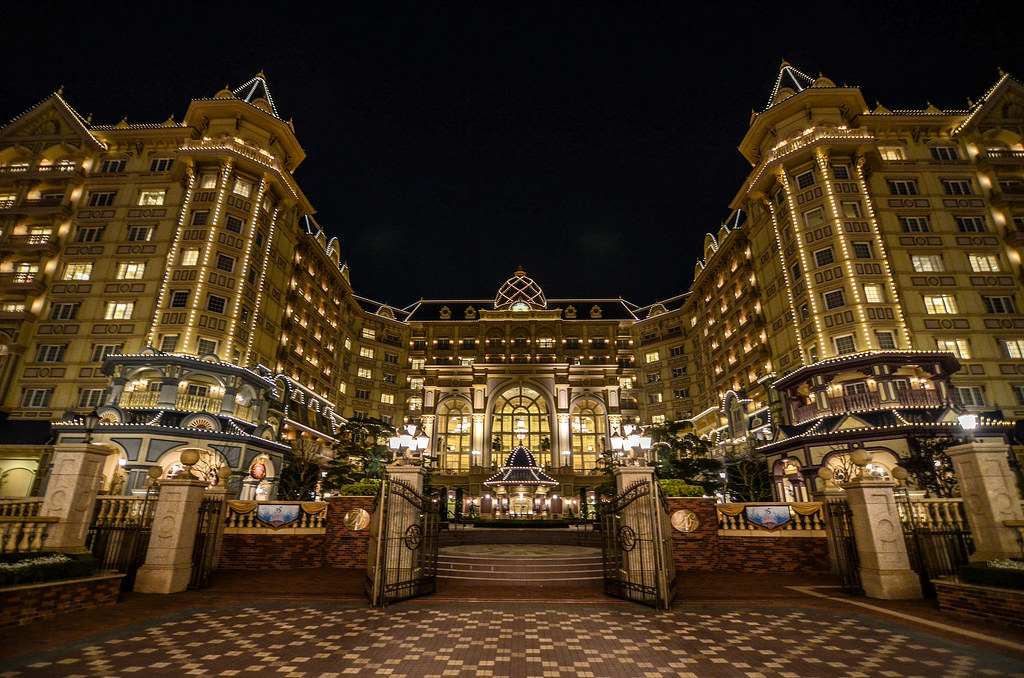 The above is, obviously, a photo of the hotel.  Here is a photo from the same exact spot when I turned around. 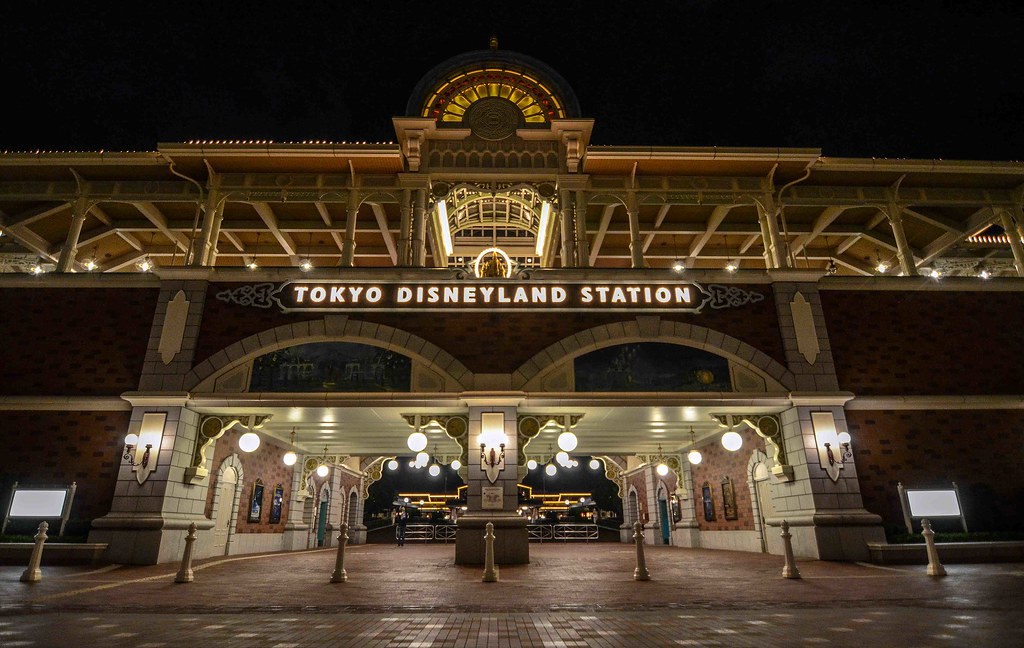 The station, where you catch the monorail to DisneySea, is right in front and behind that is the park.  There’s not a great American hotel comparison in terms of the location.  It’s like if they set a hotel on the ferry dock at Magic Kingdom or the bus station at Disneyland.  Having the station be right in front of the hotel is convenient as the ride on the monorail is pleasant and quick.  Guests receive complimentary passes for the monorail with a stay at Tokyo Disneyland Hotel. 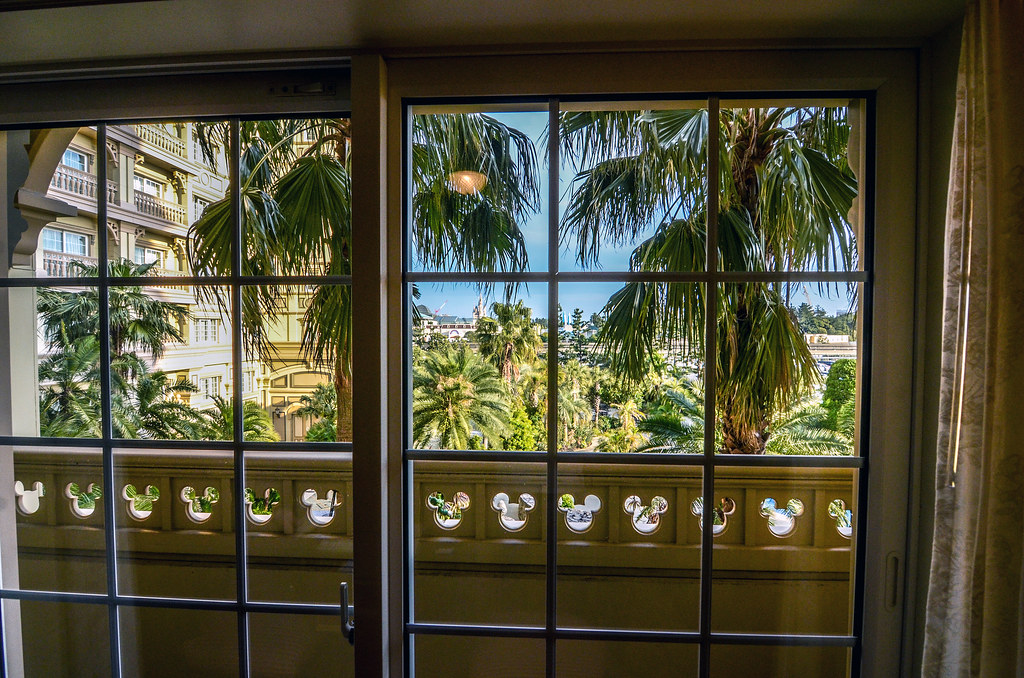 While our view from the room was slightly obstructed, we could still see the castle.  Guests can book a higher floor if willing to pay a little more or if they just get lucky at check-in.  Those views are beautiful but we were more than happy with ours.

As for the actual hotel, it is beautiful.  The Victorian theme works exceptionally well here with Disneyland being right across the street, complimenting the hotel.  Gold and blue are strewn across the hotel and everything feels elegant, be it outside or inside of the hotel. 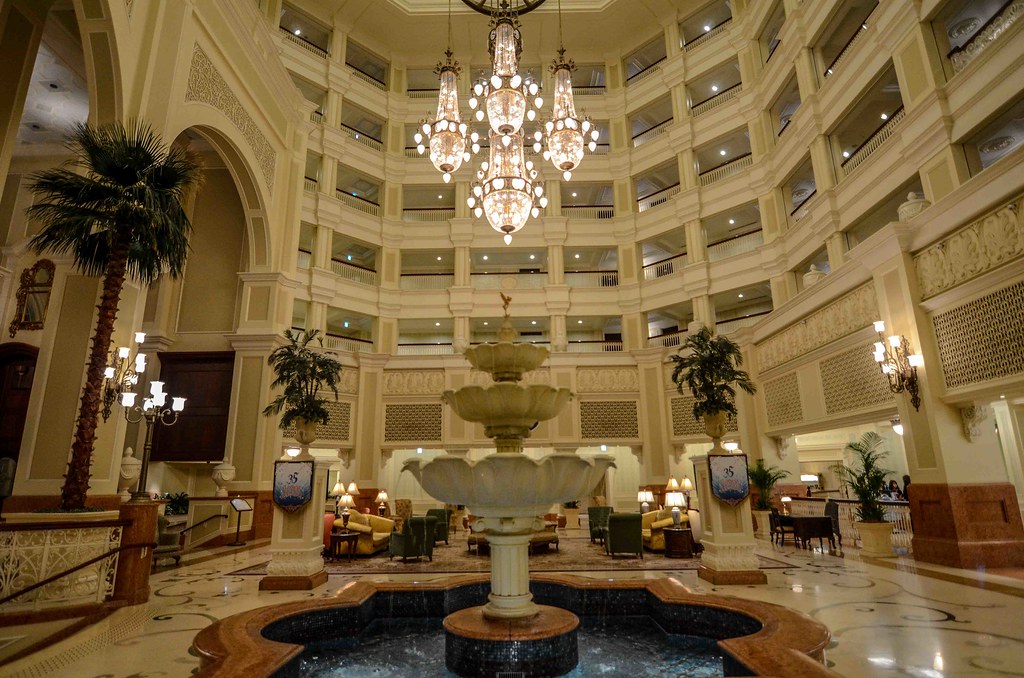 For those worried about the language barrier at check-in, there’s no need.  We had a few fairly elaborate questions (about split-stays and Einstein’s Theory of General Relativity) and they were handled without much issue.  All cast members we encountered spoke English and were eager to help.  Along those same lines, the service we experienced at the hotel (and at the resort as a whole) was extraordinary, above and beyond what we experience at Disneyland and Disney World.  At check-in we were shown to our room and given a full tour of the room and hotel along the way.  The room was meticulously cleaned every day and everything was restocked no matter how much it was used.  Tokyo Disneyland Hotel looks like an extravagant hotel and the service certainly matches that. 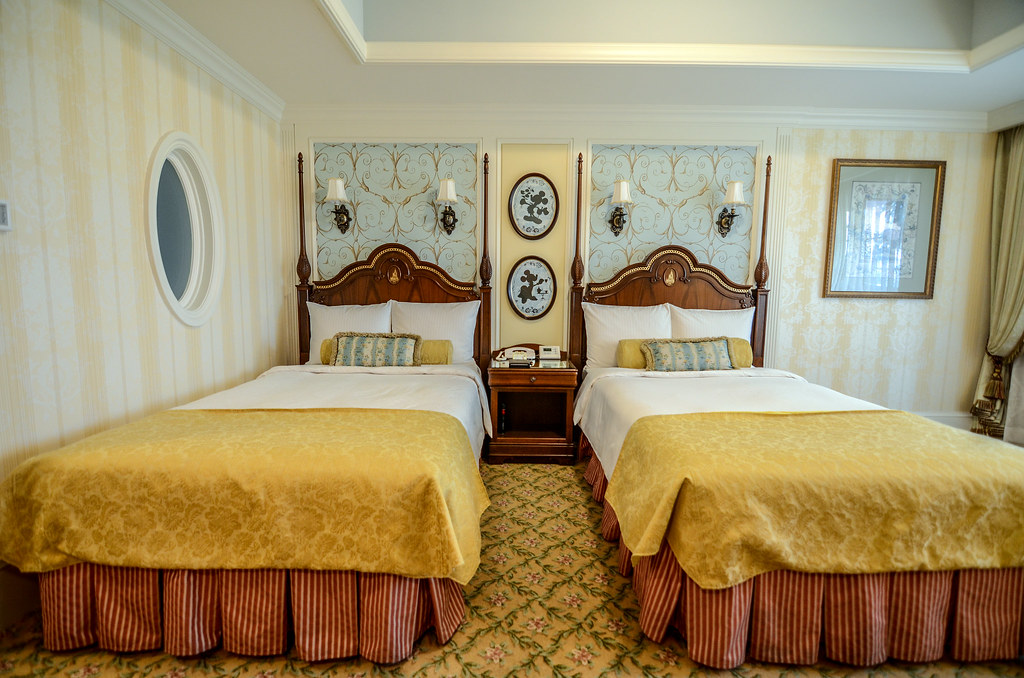 The room didn’t disappoint either, as it had a good amount of character while still being classy.  The yellows in this photo aren’t my favorite but they matched the royal feeling of the hotel.  As you can see, there are two beds here and another pull out under the bed on the right, as well as ample space for that bed by the window. 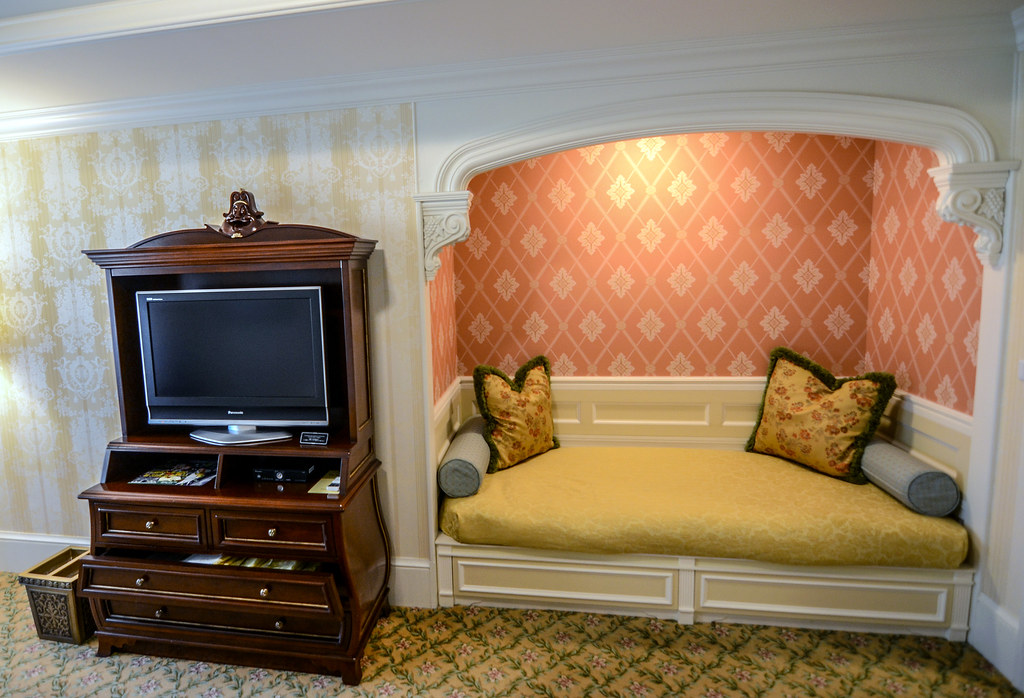 There was also this alcove bed on the other end of the room that Melissa and I fought over to sleep in.  She won.  All of the beds were full size although the alcove was closer to a twin.  As is typical Japanese custom, there were enough beds for each guest to sleep in by themselves. 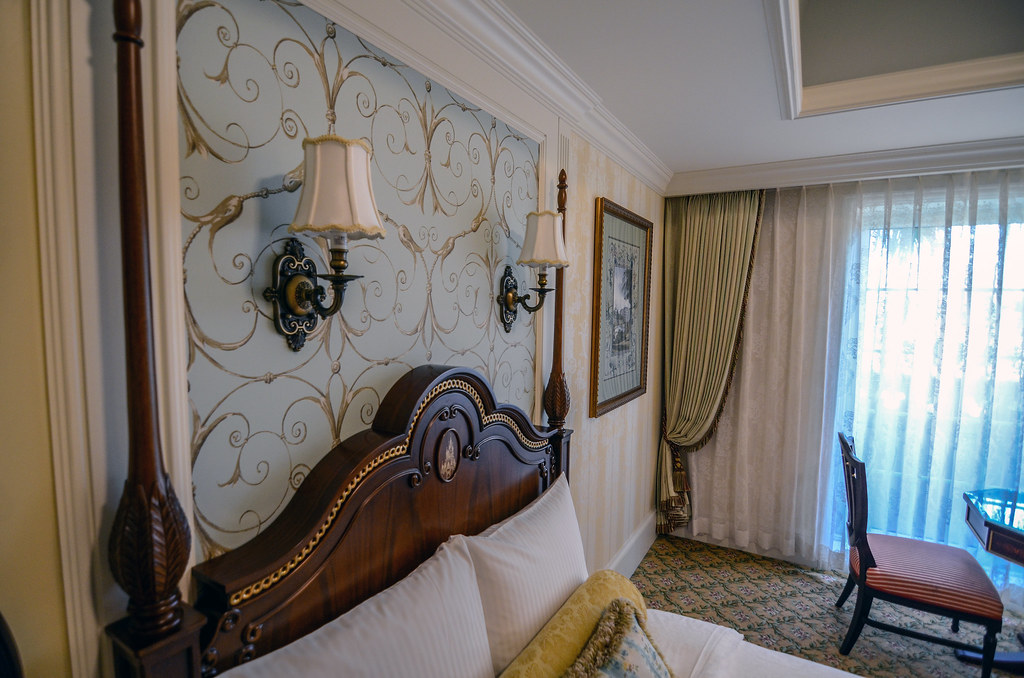 That main room had some beautiful art and lighting.  I especially like the castle on the headboard. 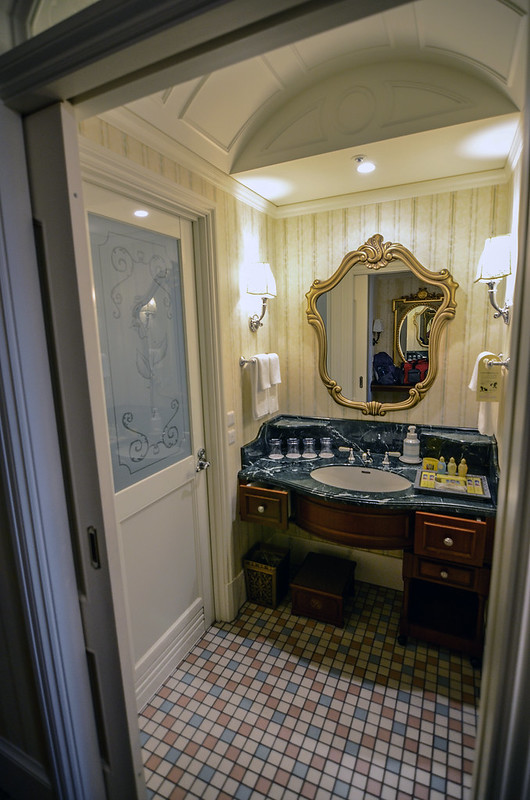 The bathroom looks much better than usual hotel bathrooms with colorful flooring and a beautiful sink and mirror.  Another Japanese custom is having a shower room, where the shower and bath are not combined but do rest in the same room. 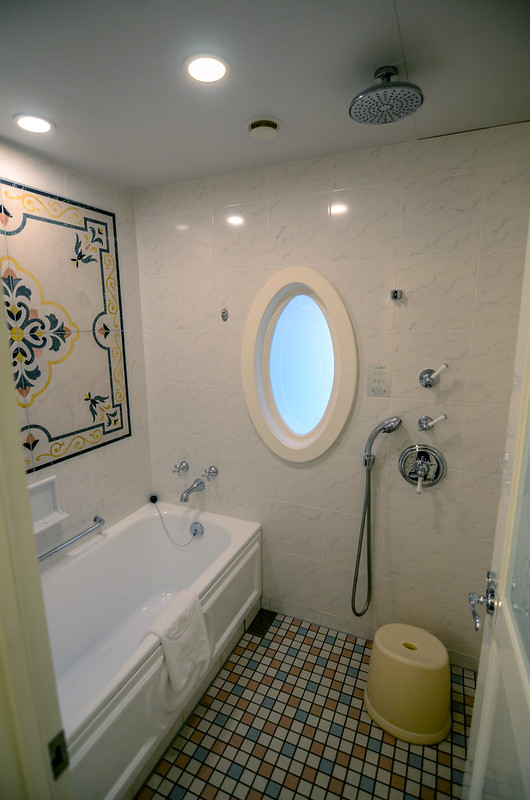 This one was the largest room we saw on the trip and the bathtub was extremely deep.  There were also two shower heads and if that’s not luxury then I don’t know what is. 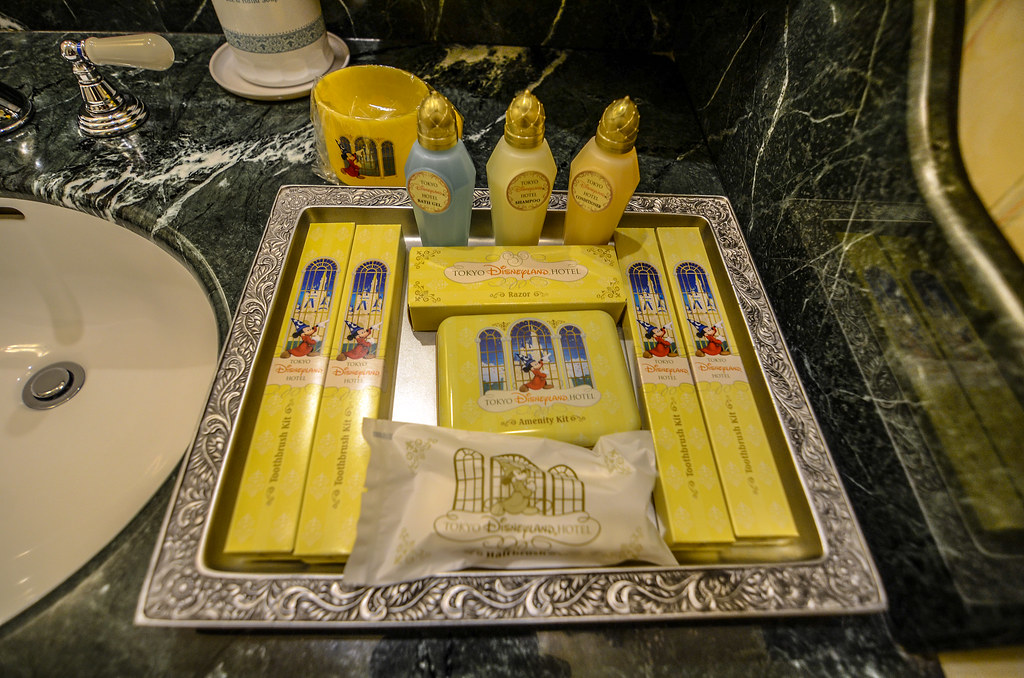 We restocked on our toiletries this trip!  While traveling to Japan isn’t cheap (although it’s not much more than Disney World for us, if at all) we aren’t hurting for extra toothbrushes.

The room was incredibly nice and one of the best I’ve ever stayed in.  No complaints on that front. 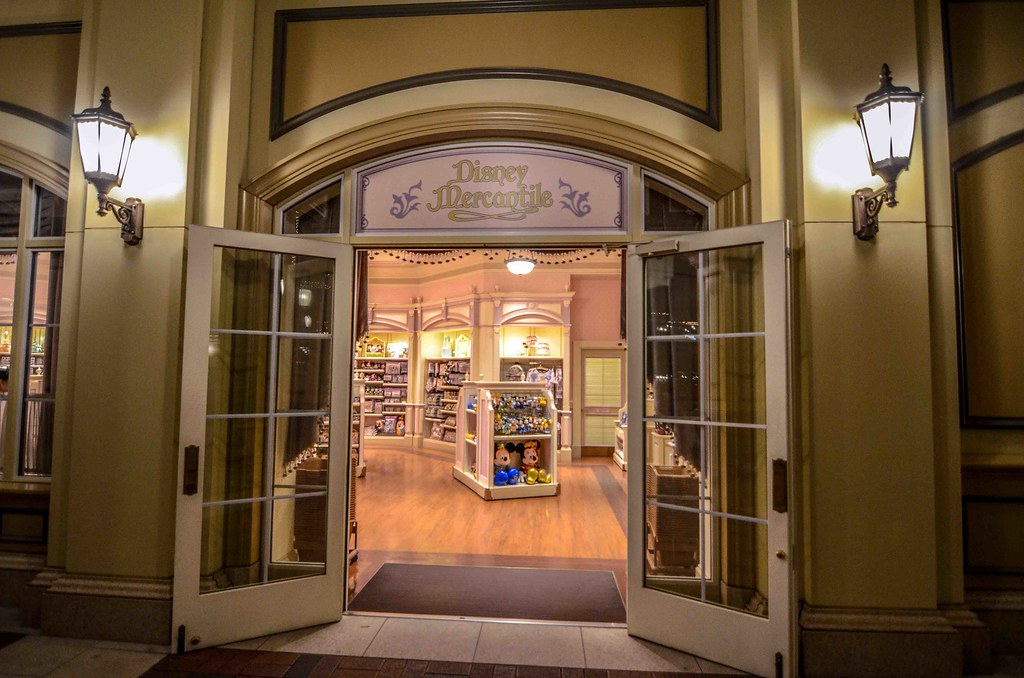 The hotel had a gift shop, a convenience store, a couple of restaurants, a lounge and a Bibbidi Bobbidi Boutique.  We especially liked the gift shop as they had some specific Tokyo Disneyland Hotel merchandise and were open well past park closing.  We didn’t make it to any of the restaurants but have only heard good things about them.  The convenience store is a good perk as it’s easy to pick up a snack, breakfast or a drink on the way to or from the parks.  The hotel does have a pool but it is only open in the summer months and isn’t as elaborate as some Disney World hotel pools.

Perhaps my only complaint about the hotel is the limited outdoor areas to walk around.  There were only a few little areas outside of the hotel that were available, although those areas were stunning.  Most notably, the back of the hotel (or the front, depending on how you look at it) sports this amazing Fantasia fountain. 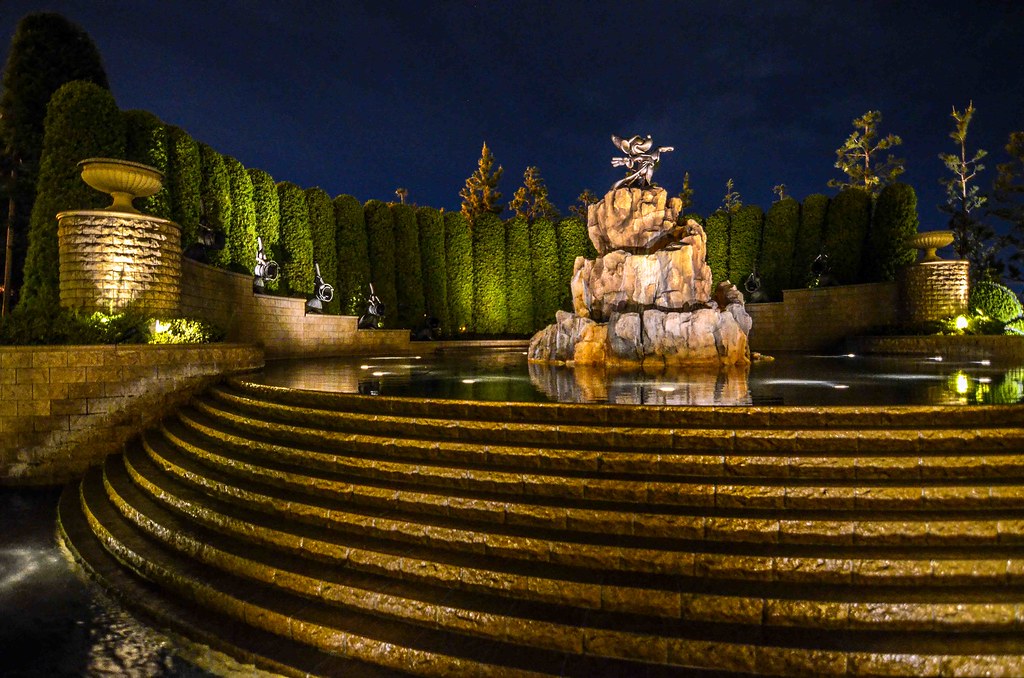 The fountain was meticulously detailed and was a perfect counter to the opposite view. 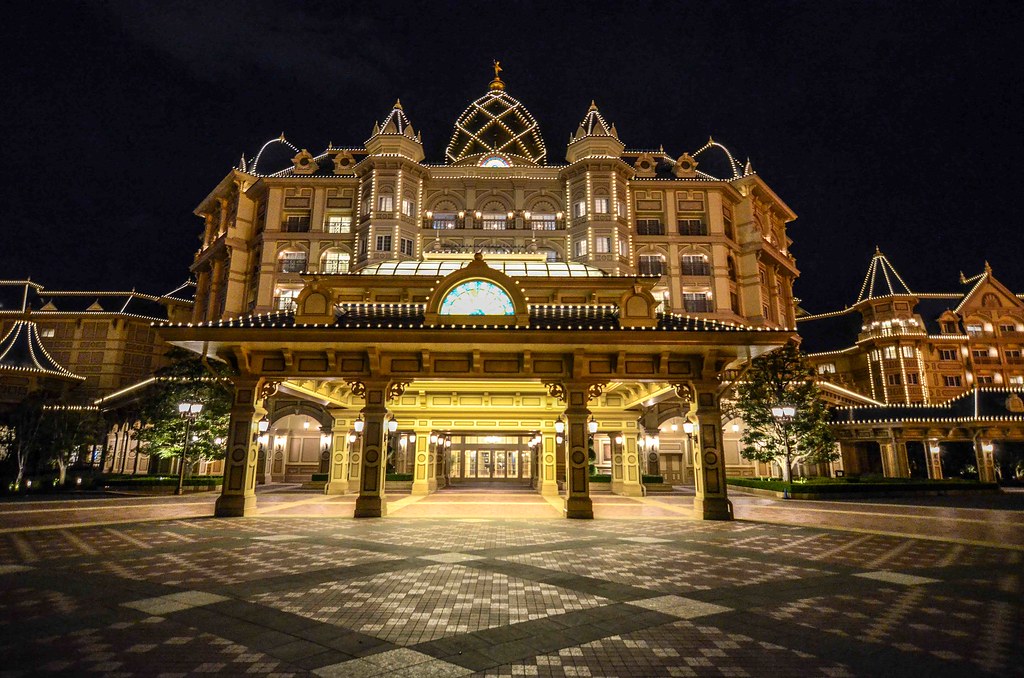 One other perk of the hotel is that you can get into the parks 15 minutes before everyone else.  This may not sound like much but there is generally a mad rush for a couple of attractions and getting out ahead of that is a big positive.  Guests of the hotel can also buy park-hopper tickets but we don’t recommend that as it’s more expensive and unnecessary at this resort.

Everything about this hotel looked incredible.  The Victorian theme didn’t grow stale as it was matched by the right amount of characters and modern looks.  There was certainly a feel of grandiose and charm to the hotel, an extension of Main Street or World Bazaar.

The bad news is that the hotel costs quite a bit of money.  Starting at $300/night, the cost is far more than the monorail hotels a stop away.  We ended up paying around $350/night and felt it was completely worth it because we were splitting the cost (so $175) and it was our first time.  The hotel swept us off our feet and we were blown away.  Next trip, the surprise and excitement for the hotel might not be quite as high so we’ll likely opt for a resort on the monorail.  We’d recommend the same if you are trying to do this trip on a budget, as those hotels are nothing to sneeze at.  The parks are so incredible that time spent at the hotel is pretty minimal anyway. 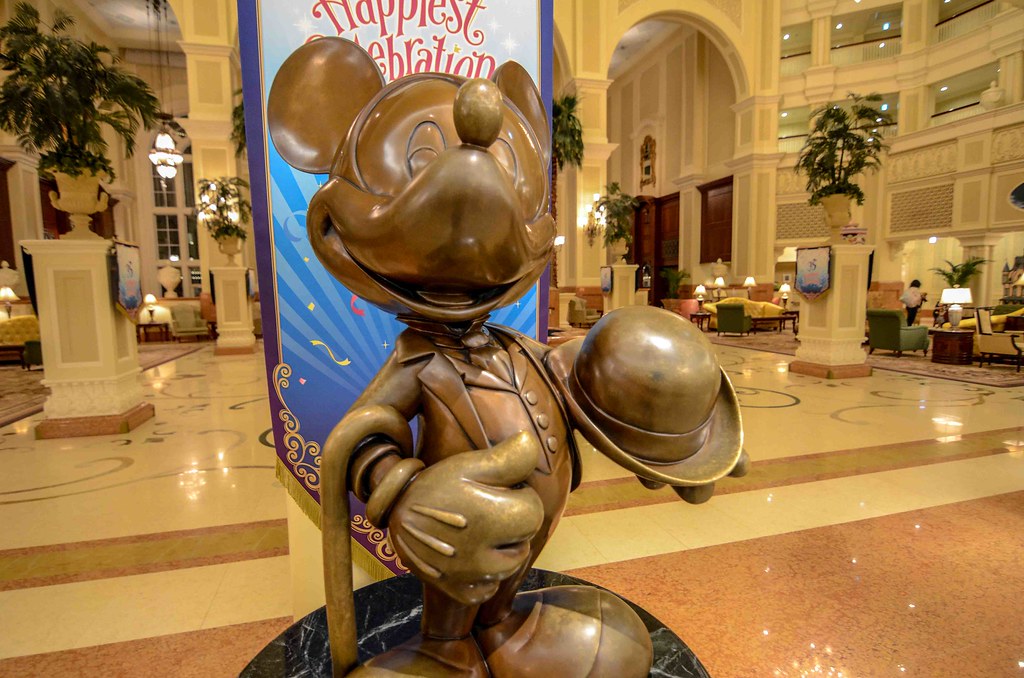 But, if you have the means and are looking for a special place to stay or a trip to Japan seems like a once-in-a-lifetime deal then splurging on Tokyo Disneyland Hotel would be a good move.  The location and excellent style and service make the price feel less outrageous than it usually would to me.  Unless you constantly are thinking about money or worry about it, I can’t imagine anyone regretting their stay at Tokyo Disneyland Hotel.

Tokyo Disneyland Hotel was the best Disney hotel I’ve ever stayed at.  It blends a sense of elegance and beauty along with just enough character and modern design to make the hotel feel original and classic.  While the price is steep, I do think it’s worth trying at least once. 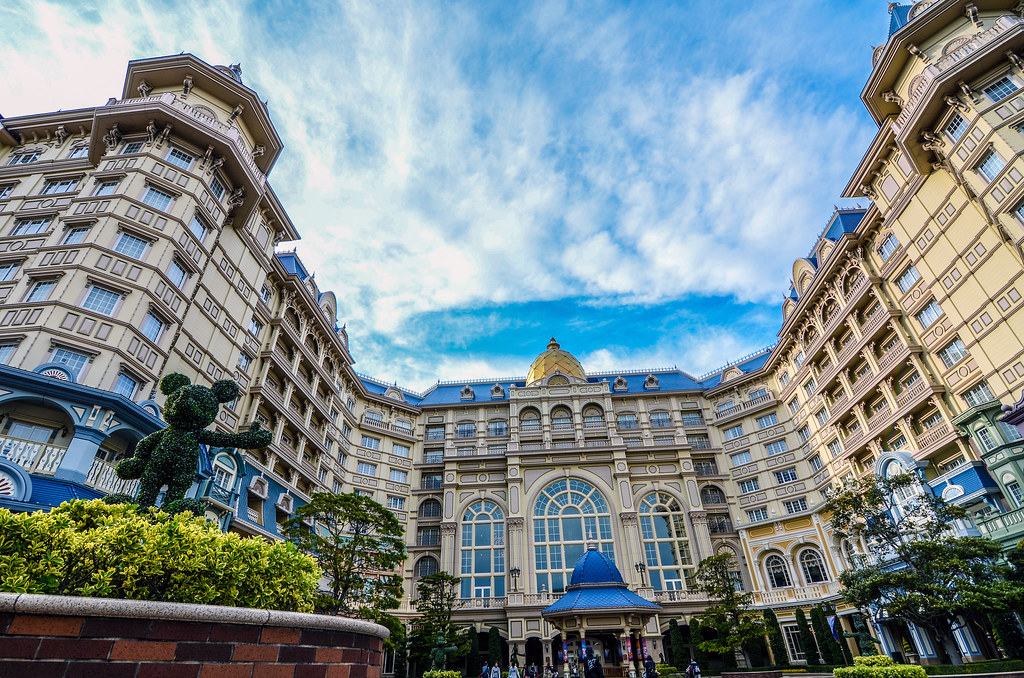 Do you have any thoughts or questions about Tokyo Disneyland Hotel?  Let us know in the comments down below! Thank you for reading Wandering in Disney.  If you enjoy our content please subscribe to the blog (via WordPress or email) and like our social media pages.  You can find all of those things on the right side of this page.  Have a great day!