New York Deli is a counter-service restaurant in Tokyo DisneySea’s American Waterfront.  Like an actual New York deli, this restaurant specializes in sandwiches along with a few sides and cheesecake.  Their Mile High Sandwich is popular and promoted throughout the American Waterfront.  We recently ate at New York Deli and this review will cover that experience along with a few photos and our overall thoughts on the restaurant.

The idea that Japanese cuisine is far different from American cuisine is blown out of proportion.  Sushi is unique but has obviously became popular in the U.S.  Ramen is like soup, only way better.  Japanese curry is similar to stew with a little spice.  There are differences between most of the regular foods but not as big of a difference as one might think.

That said, I could not talk myself in to trying the sandwiches on our trip to Japan.  The ingredients were always just different enough to keep me away.  Many sandwiches had more mayonnaise (I’m not a fan) than I’d want or some with lot of egg.  More often the combinations of food, while I’m sure would be good if I actually tried it, struck me as weird.  For example, a Tuna and Egg Panini is now offered at New York Deli.  When I think about it, all the ingredients make sense but it just doesn’t sound appetizing.

Luckily, New York Deli had a few sandwiches that didn’t strike me as too strange to try.  The famous Mile High Sandwich had some egg on it and a sauerkraut sauce but the components seemed to work on paper.  That is part of what lured us into the restaurant.  The other factor was the restaurant fitting perfectly in its port-of-call, the American Waterfront. 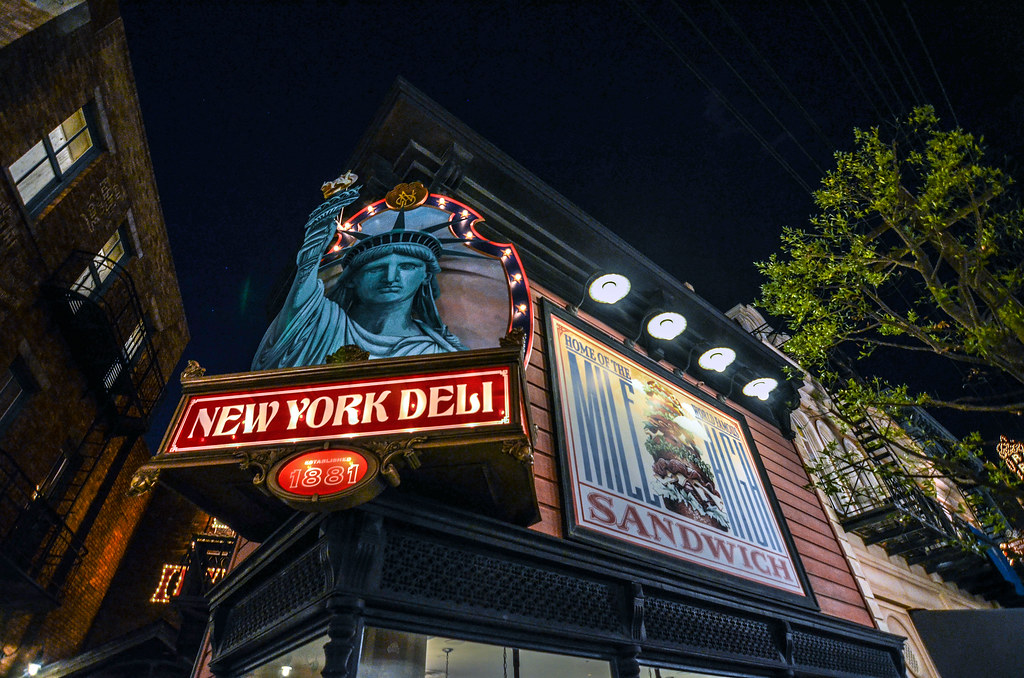 The outside of the restaurant is simple enough, with a fun sign and a seemingly hole-in-the-wall location.  Like most counter-service locations, this restaurant had an ordering bay and then a seating area.  The seating area stretched through other storefronts, with each room matching that specific storefront.

Those small shops, overtaken by the New York Deli, included a photo studio and tailor shop.  Both rooms were interesting places to dine and matched their storefront based on the props on the wall. 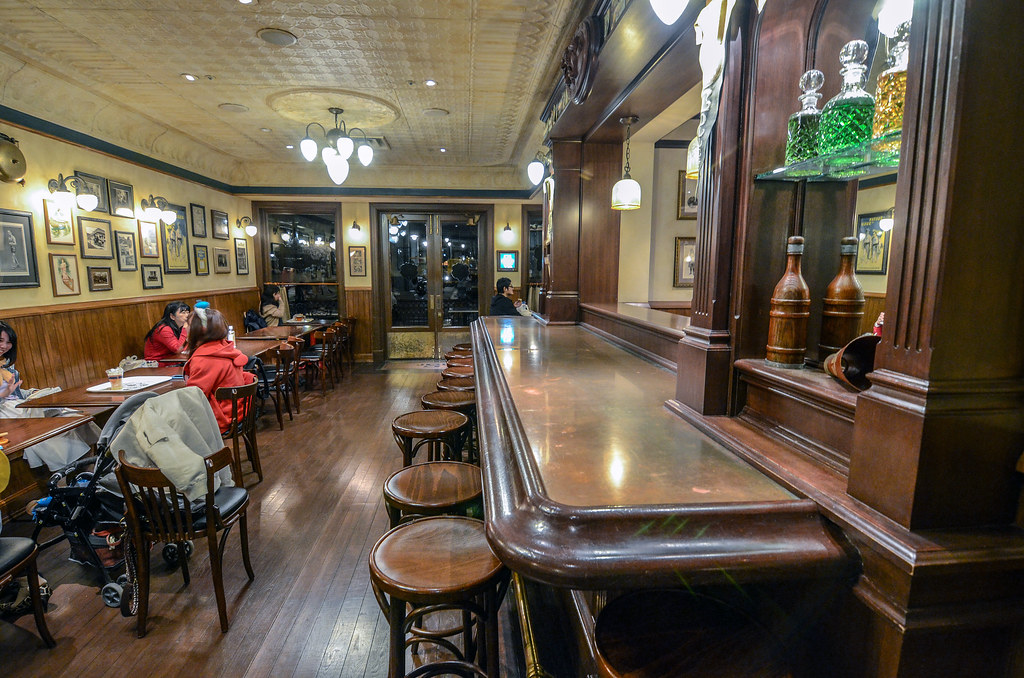 The main seating area was a tavern and dining hall owned by JJ Sullivan.  That is where we ended up sitting and the details were great.  The wall was adorned with caricatures and old photographs.  There was also bar seating to reflect the tavern.  Like most of DisneySea and all of American Waterfront, New York Deli was a pleasant place to hang out with an easily accessible but well told back story.  Most guests probably don’t care about the story behind a place where they’re going to eat a sandwich but DisneySea does and the theming throughout the restaurant proves that.

New York Deli can get very busy.  I would recommend avoiding the restaurant at peak dining hours instead going before noon, between 2-5 or after 7.  This isn’t as popular as Queen of Hearts Royal Banquet Hall but can still get crowded. 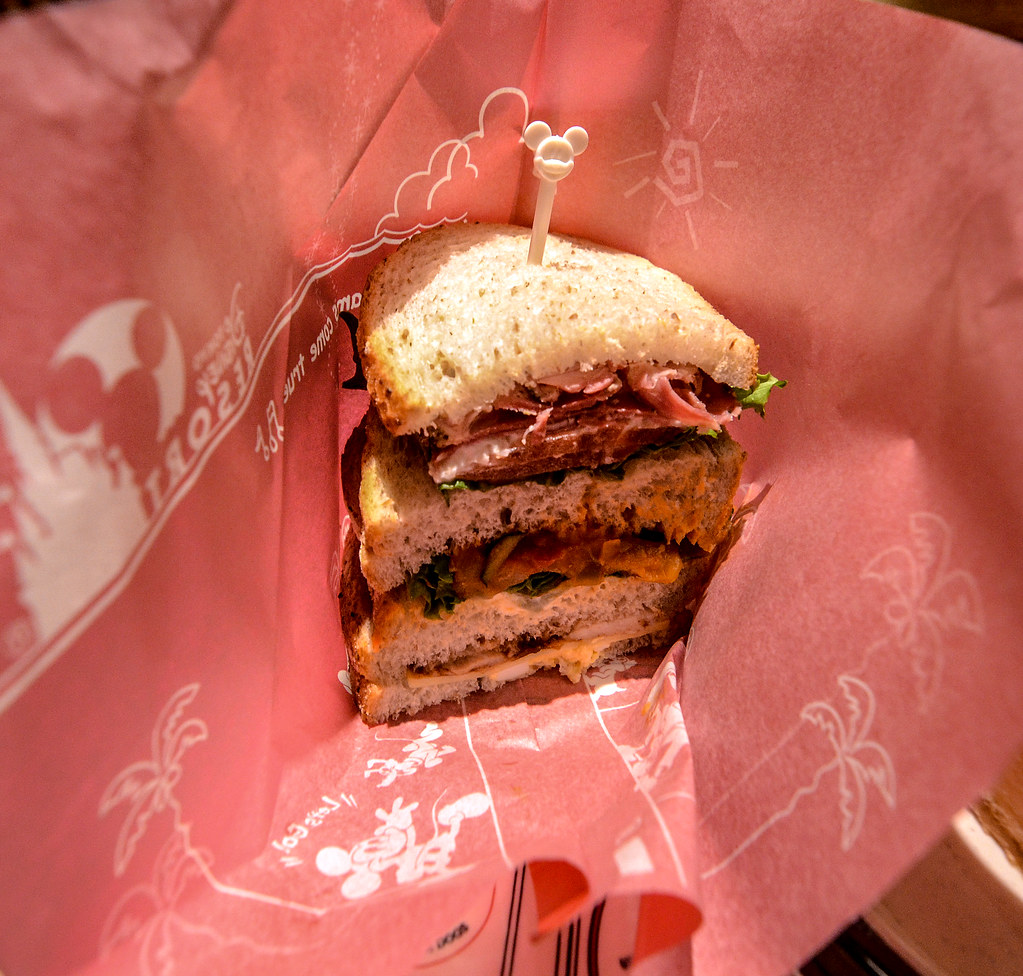 This should be blatantly obvious but the Mile High Sandwich was very tall.  I still think about the proper way to eat this and can not figure it out.  We ended up squishing it down and trying for a gigantic bite.  This sort of worked but made more of a mess than anything.  All of the flavors did work well together and I really liked the sauerkraut sauce.  The meats (roast beef and chicken) were both fresh and tasty.  Melissa and I shared this and got the set meal which included fries, cheesecake and a drink.  It was enough for a light meal and we were happy with our choice.  I liked the sandwich more than her and would definitely get it again.  She said it was decent but not her favorite.  For the set meal the cost was around $12 while the single item sandwich is under $9.

I’ve read complaints about the sandwiches being small portions at New York Deli but I thought they were fairly sized.  Maybe a little smaller than what we’re typically used to in the U.S. but not enough for me to really notice. 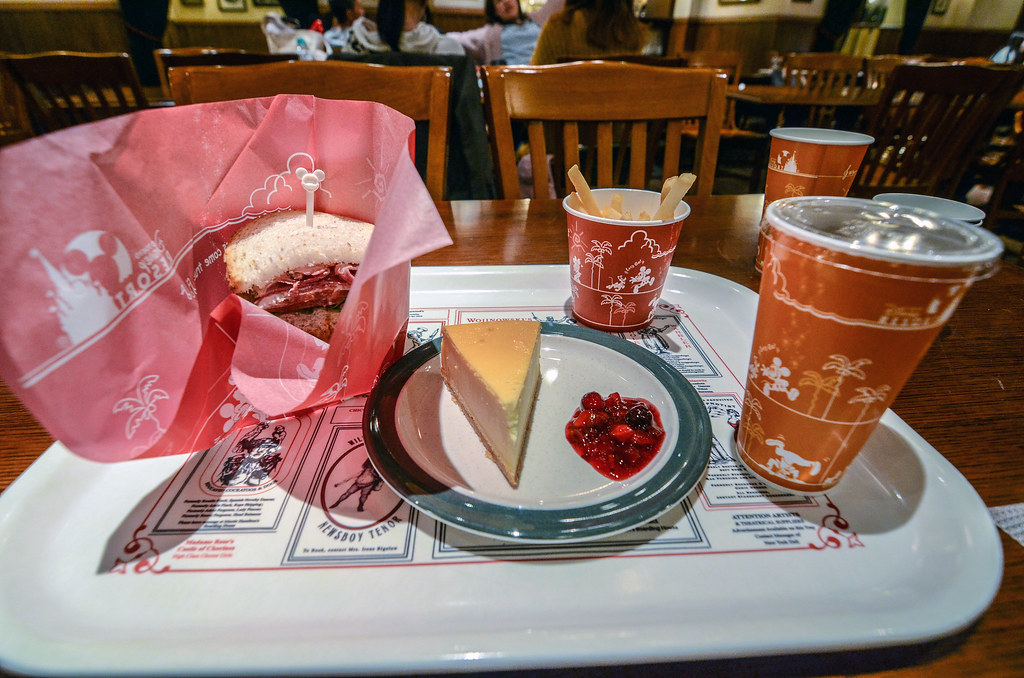 The fries were surprisingly good for a theme park, fresh and crispy.  The flavor wasn’t amazing but they were good fries.  We both liked the cheesecake, as well, especially for being a counter-service dessert.  It was served with a berry coulis that added some texture and flavor.  I’d absolutely recommend sharing this set as a light meal.  We had many places we wanted to try in the park so getting this worked really well.

Overall, I found New York Deli to be another home run in DisneySea’s American Waterfront.  While not the best counter-service restaurant in the park, it’s offerings are solid and the restaurant is themed incredibly well.  The prices were more than fair and the Mile High Sandwich feels like a bit of theme park lore, with its fame stretched out across the port-of-call.  At the very least, check out the detail in New York Deli but you might as well have some of the food too!

Do you have any thought or questions about New York Deli or Tokyo Disney Resort?  Let us know in the comments!  If you enjoy what you’re reading please subscribe to the blog and like our social media pages, all of which you can find on the right side of this page.  Thank you for reading, we really appreciate it!