The atmosphere Queen of Hearts Banquet Hall creates is truly remarkable.  Coming up with a stateside version is a pretty difficult task.  Be Our Guest comes to mind as the closest match, but the environments are very different.  The outside of the restaurant invokes the zaniness of Alice in Wonderland, with the castle rising above (like Be Our Guest) hills and some heart-shaped plants. 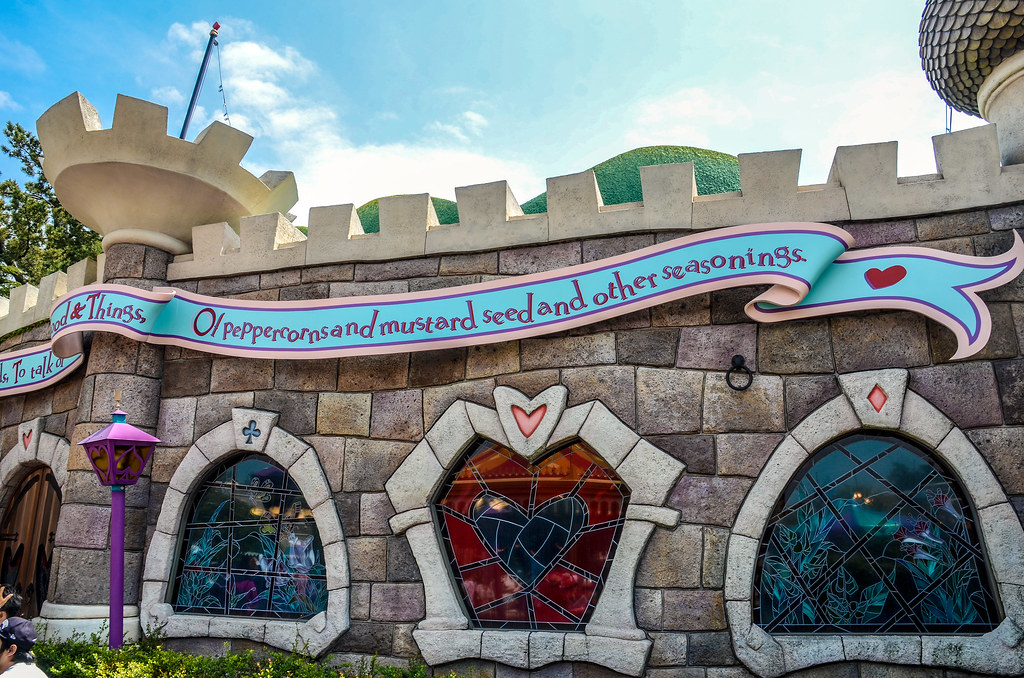 Once inside, the environment is enveloping and unmatched as far as counter-service (or table-service?) locations go.  Gigantic plants grow above guests and beautiful murals adorn the walls.  Card soldiers line the walkways and details abound in every room. 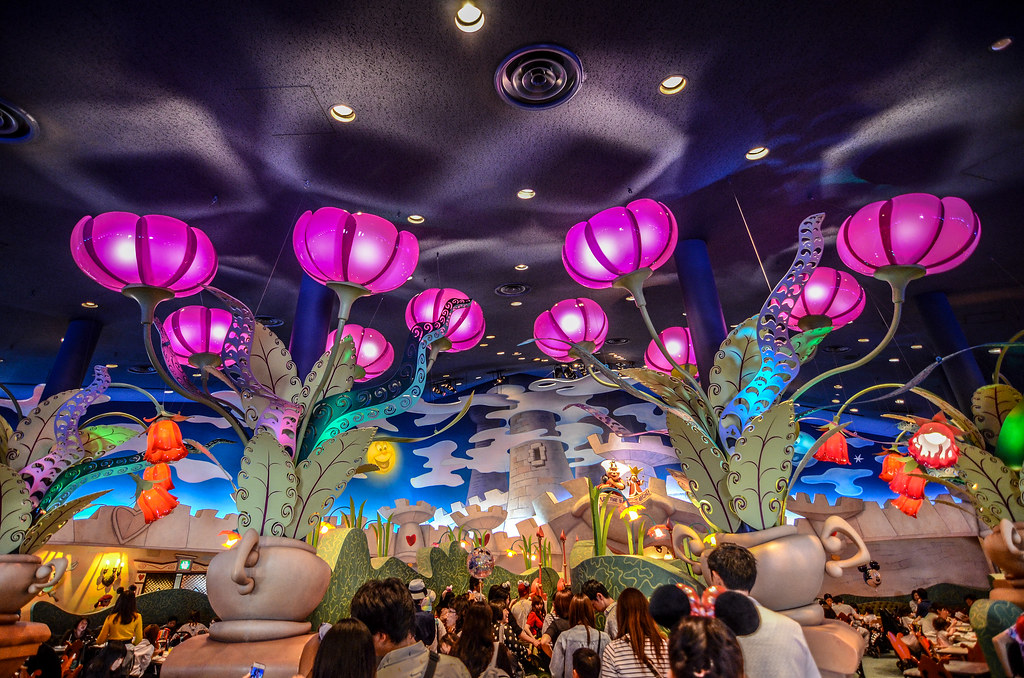 The buffeteria room has a checkerboard floor pattern and is very busy.  The entire restaurant is vibrant and wild.  Much like other areas of Tokyo Disneyland, it feels like controlled chaos as the senses are overloaded yet things are done orderly. 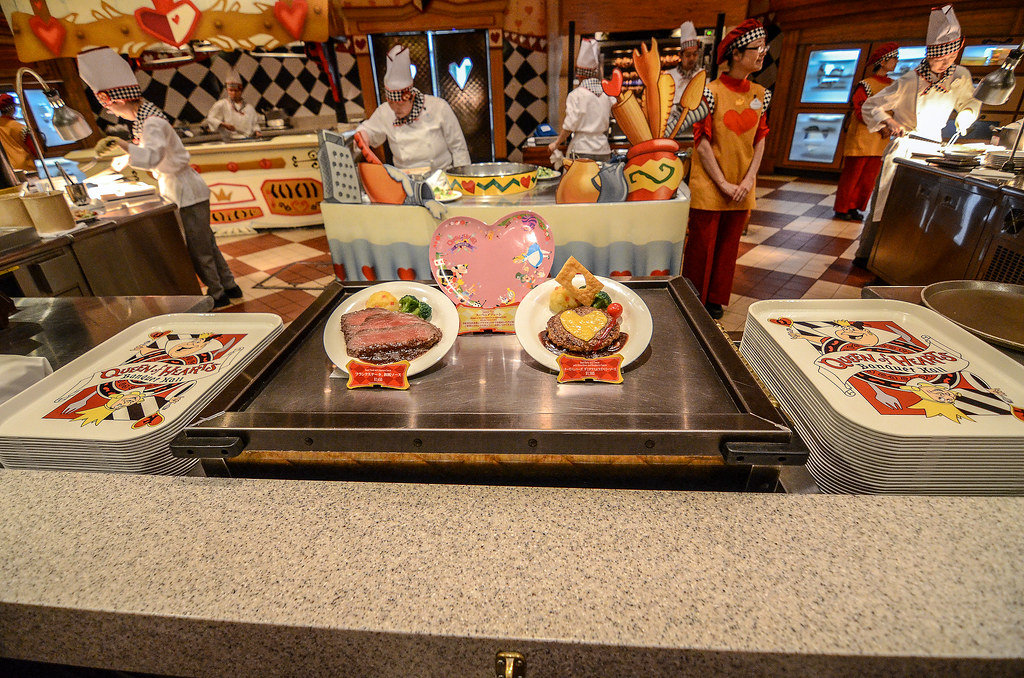 As I’ve already mentioned, the atmosphere is second to none when it comes to restaurants.  After walking around Tokyo Disneyland for a few days previous to our meal, the atmosphere didn’t feel as mind-blowing.  Tokyo Disney Resort is no stranger to outstanding and enveloping areas.  Also, other areas have a bit more story while this area feels a bit like an Alice in Wonderland greatest hits area.  That doesn’t lessen Queen of Hearts Banquet Hall, it just doesn’t make the restaurant as jaw-dropping as some photos do.

The cuisine served at this restaurant will be familiar to most American visitors.  Salads, chicken, fish and beef are all served and while they might be slightly different from your usual food at home, they are very familiar.  Here’s a look at the menu and a link that you may need to run through Google translate. 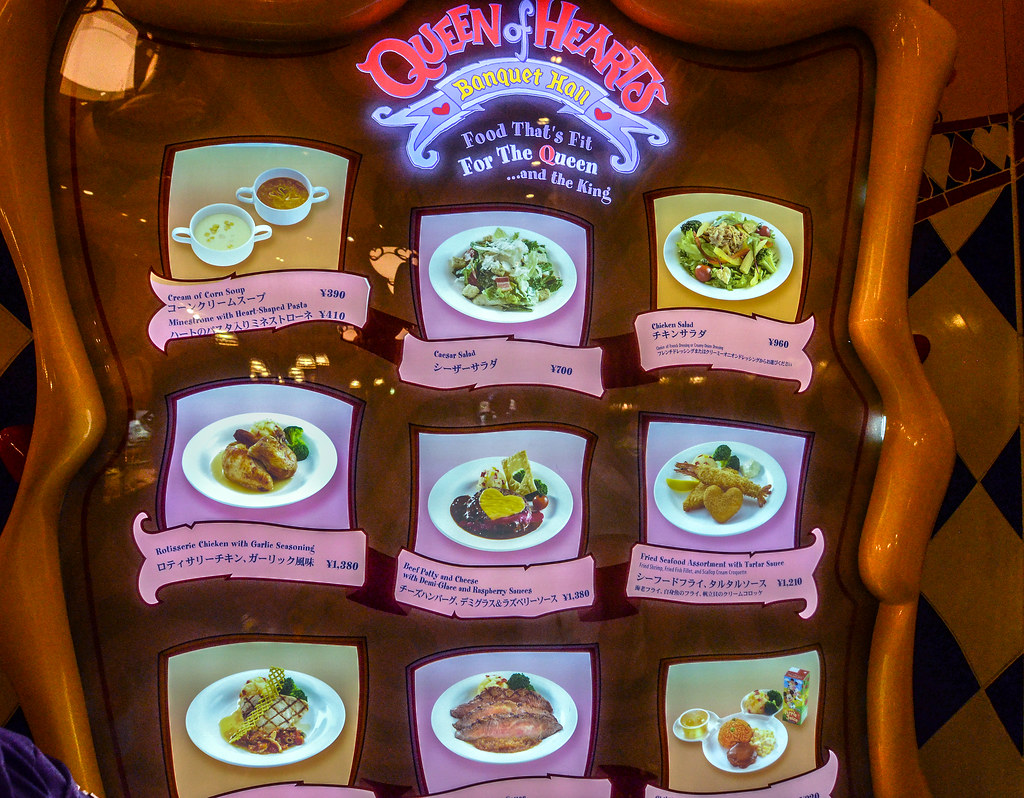 For our entrees, we ordered the Rotisserie Chicken and Swordfish.  Melissa had the chicken and we both found it to be solid but not spectacular.  The gravy on the chicken was rich and added a nice flavor.  The chicken was juicy although I didn’t taste much of the garlic seasoning that was listed with it.  This was a good option but not the standout. 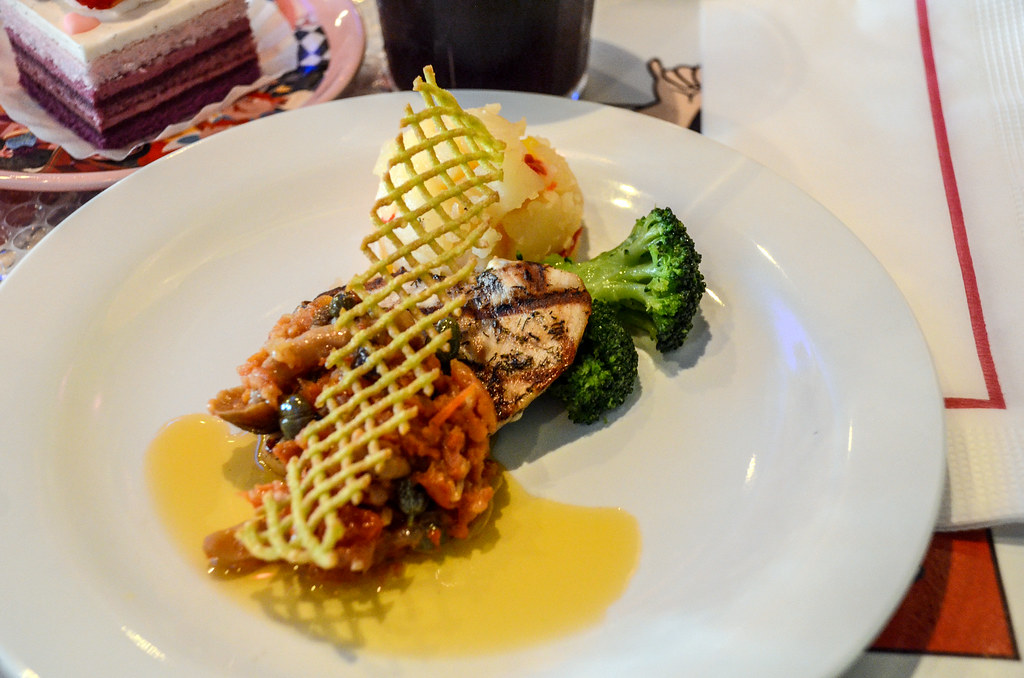 That honor belongs to the swordfish, which was quite delicious and has a nice mix of flavor.  In general, Tokyo Disney Resort does fish better than other meats and this is no exception.  The fish was tender and had some great flavor that was only augmented by the tomato sauce (almost like a salsa) along with it.  The potato topping was a nice touch.  Neither dish came with many vegetables, which seems to be the norm throughout Japan.  The fish was table-service worthy while the chicken was decent for being a counter-service spot.

Somewhat surprisingly, the fish was just a touch over $10 while the chicken was about $14.  Both were decent values but obviously, I would recommend the fish. 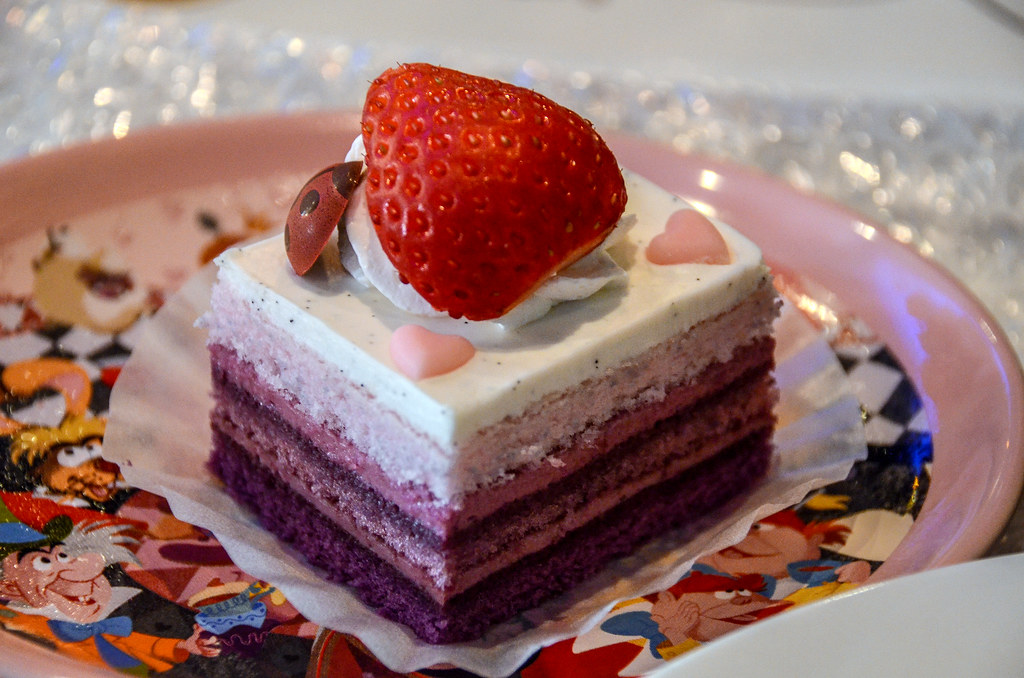 Queen of Hearts Banquet Hall had desserts that matched the vibrant restaurants.  We opted for the special cake that came with a souvenir plate.  This is a familiar practice in Tokyo Disney Resort and a good way to get a cheap souvenir.  The cake was moist and delicious, and I typically don’t like cake.  I don’t think you could go wrong with any of the desserts offered.

Overall, I thought the food was good but not the best we had at Tokyo Disney Resort’s counter-service restaurants.  Where Queen of Hearts Banquet Hall really excels is the atmosphere and that alone is worth going in, getting a dessert and sitting down for a while.  The food certainly isn’t a deterrent but the atmosphere is worth an extra stop in your day. 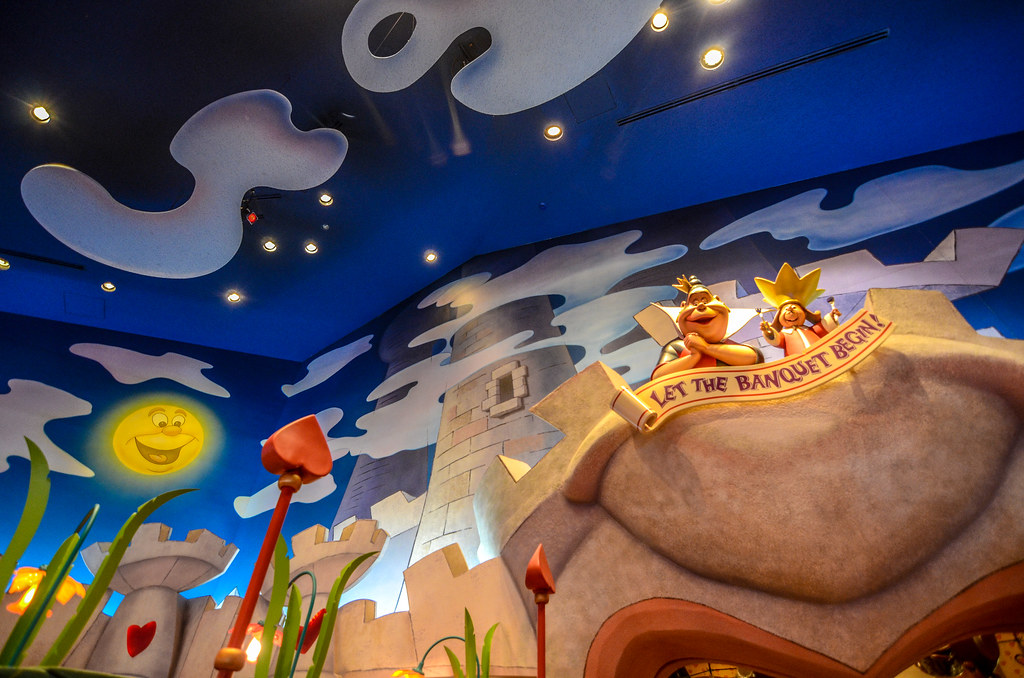 The biggest drawback of the restaurant is the crowds it draws.  If you go right in the middle of lunch or dinner time then there is a decent chance that you’ll be waiting for an hour or more.  Instead go at off times, right at opening, between 2-4 PM, or right before closing.

Queen of Hearts Banquet Hall is one of the best counter-service restaurants anywhere and definitely worth having a meal at.

Do you have any thoughts or questions about Queen of Hearts Banquet Hall?  Let us know in the comments!  If you enjoy what you’re reading here on Wandering in Disney please subscribe to the blog and like our Facebook page.  You can find both of those on the right side of this page.  Thank you for reading, we really appreciate it!