Writing a dining review about a restaurant in Walt Disney World seems a little more meaningless than it usually does.  My thoughts and prayers are with those that have been devastated by Hurricane Irma and Harvey.  If you haven’t already done so, please consider donating to the relief efforts going on there.  Thank you.

The Sci-Fi Dine-In Theater Restaurant is located in Walt Disney World’s Hollywood Studios.  The restaurant serves standard American fare and is known for the atmosphere.  Sci-Fi does take part int he Disney Dining Plan, costing one sit-down credit.  The restaurant also offers a 10% annual pass discount as well as Tables in Wonderland.  We recently dined at Sci-Fi Dine-In Theater Restaurant and this review will cover that experience.

While many Walt Disney World restaurants have a certain degree of hype surrounding them, few reach the legendary status that Sci-Fi Dine-In Theater Restaurant does.  The legend of Sci-Fi exists almost solely because of the atmosphere. 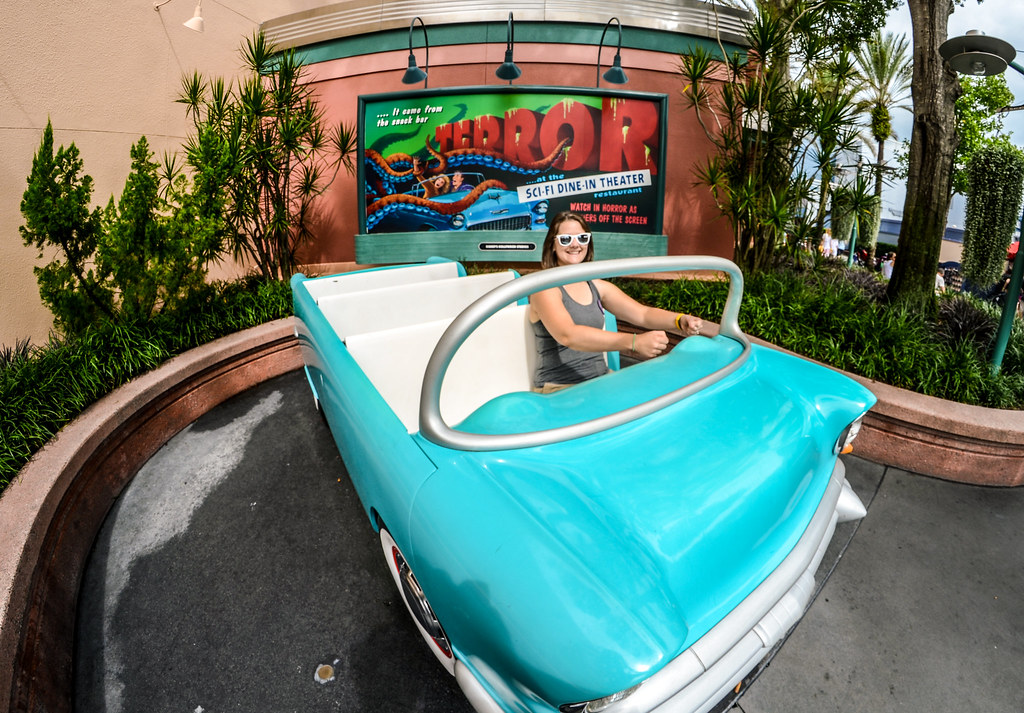 The outside of the restaurant is fairly unassuming but there is this fun photo opportunity with the car prop.  The movie sign in the background is a nice touch. 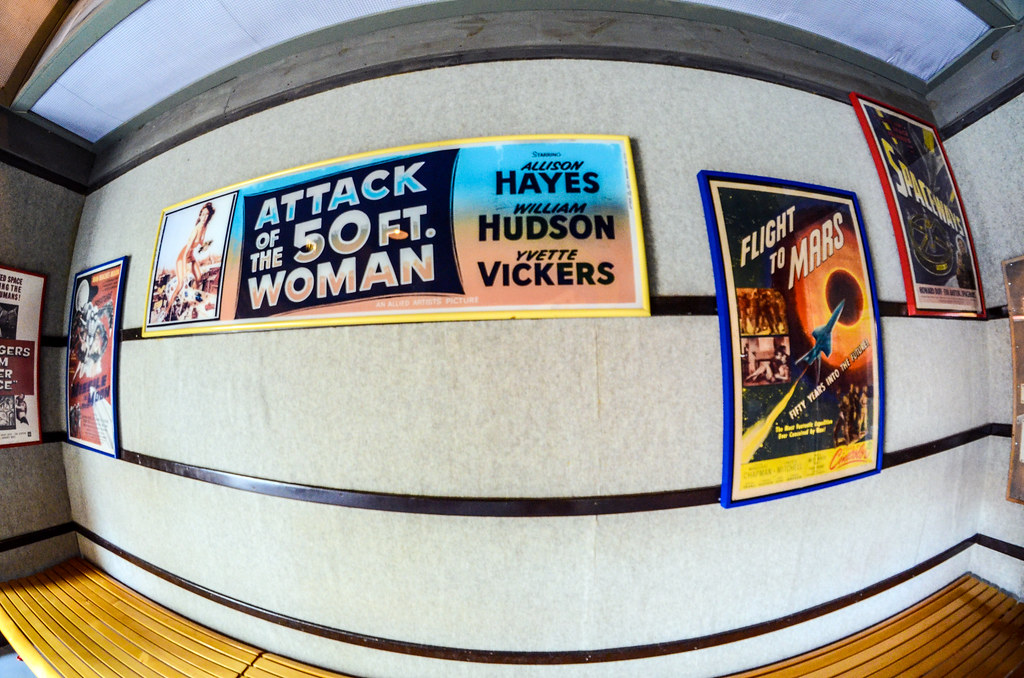 The lobby is adorned with old movie posters, many of which supply the clips shown inside the restaurant.  Looking around at these posters is fun once checked in.  Before long, we were called in for lunch and got our first peek at the enveloping atmosphere. 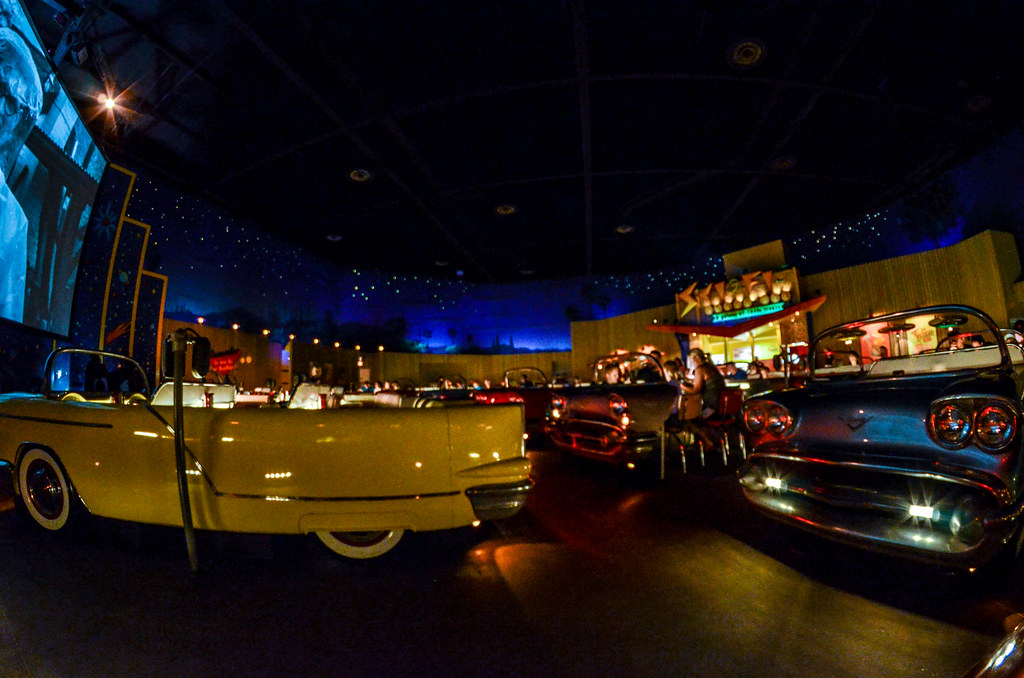 If you don’t already know or haven’t figured out, the Sci-Fi Dine-In Theater Restaurant is themed to an outdoor drive-in theater.  The seating is in these cars that you see up above.  The wait staff comes to your car to take orders.  There are a few larger tables or seats but most will fit two people in the booth and each car has at least two booths.  Between the cars, screen and dark blues around the restaurant, the scene is convincing. 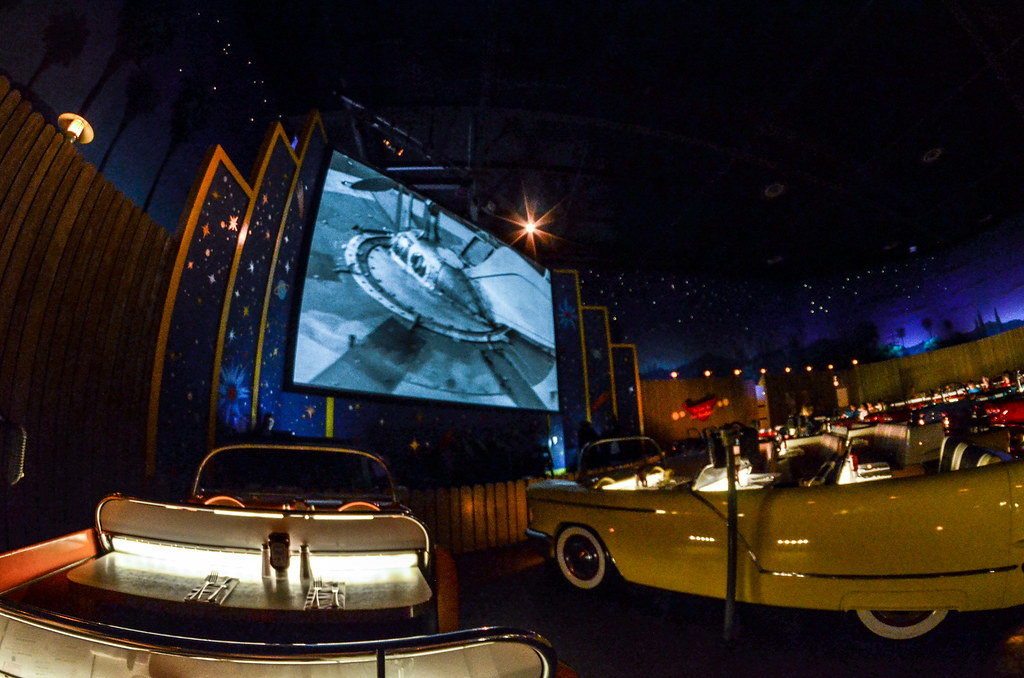 The screen largely shows clips of old sci-fi movies.  Most of these clips are from B-movies and are silly.  There are a few old horror movie clips sprinkled in there as well as a clip with Walt Disney.  All of the clips are family friendly and won’t scare children.  While interesting, the clips kind of play second fiddle to the whole experience.  The volume can’t be too high because the wait staff has to hear.  I enjoyed the clips, especially the clip from Attack of the 50 Foot Woman, but they are there to augment the experience not be the sole purpose.

Moving on to the food, the main portion of the menu is sandwiches.  There is steak, salad and pasta, as well.  The sandwiches generally cost in the $15-$20 range, while the steak tops out the menu at just over $30.  Here’s a link to the menu. 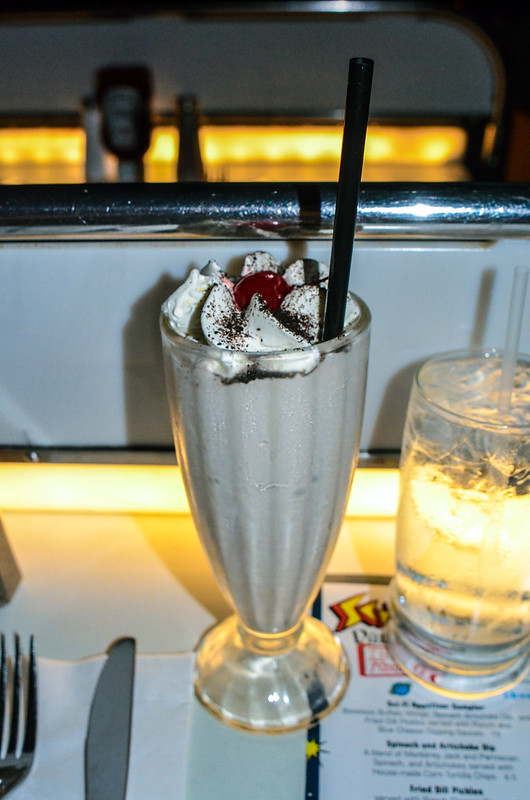 We both started with this Oreo Cookie Milkshake.  This was pretty good although not my favorite.  With that being said, the milkshakes are a great value if on the dining plan as you can just use this as your drink.  With a usual cost of $6, this is significantly more expensive than most drinks on the dining plan (until alcoholic beverages are included starting next year). 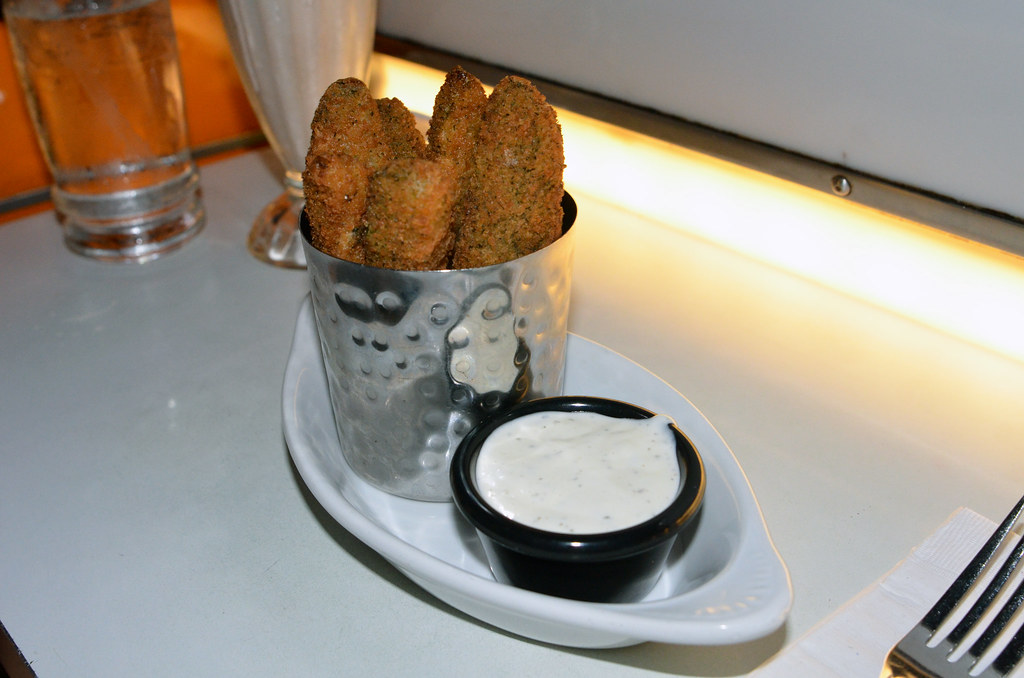 Next came our appetizers.  Melissa got Fried Dill Pickles.  I didn’t really like these but Melissa did.  I’m guessing your opinion will depend on your thoughts of pickles and if you don’t mind eating a hot pickles.  That’s what threw me off.  They seemed well prepared for what it’s worth. 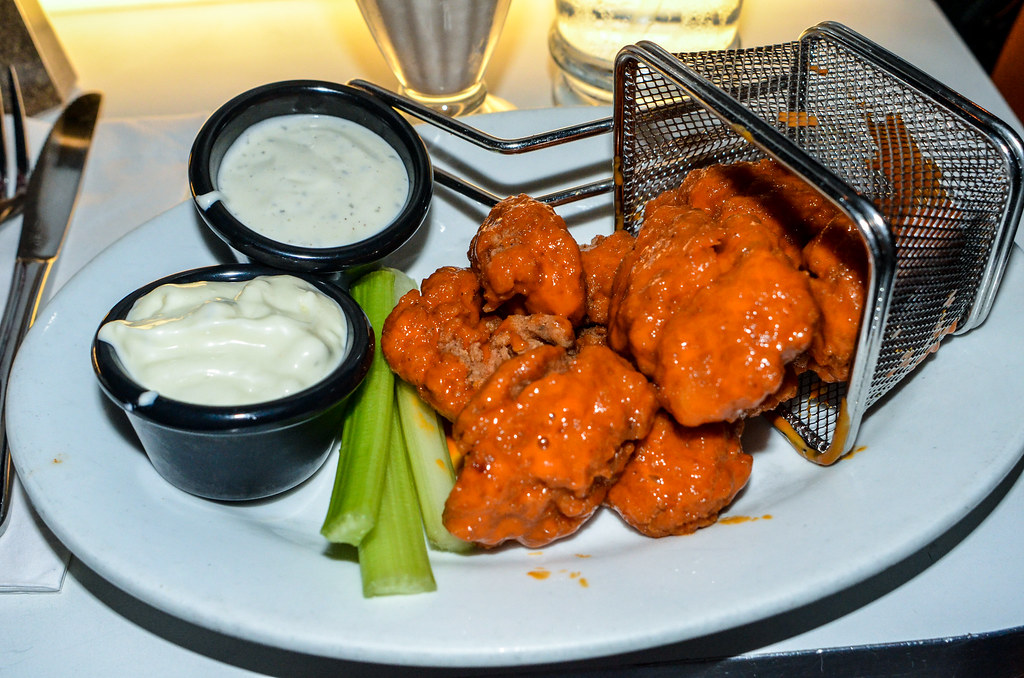 I ordered the Boneless Chicken Wings with the spicy buffalo sauce.  I liked the sauce pretty well.  These were pretty spicy after a while but not on initial taste.  The meat was pretty average.  I enjoyed these but wasn’t blown away, similar in quality to chicken wings at most chain restaurants. 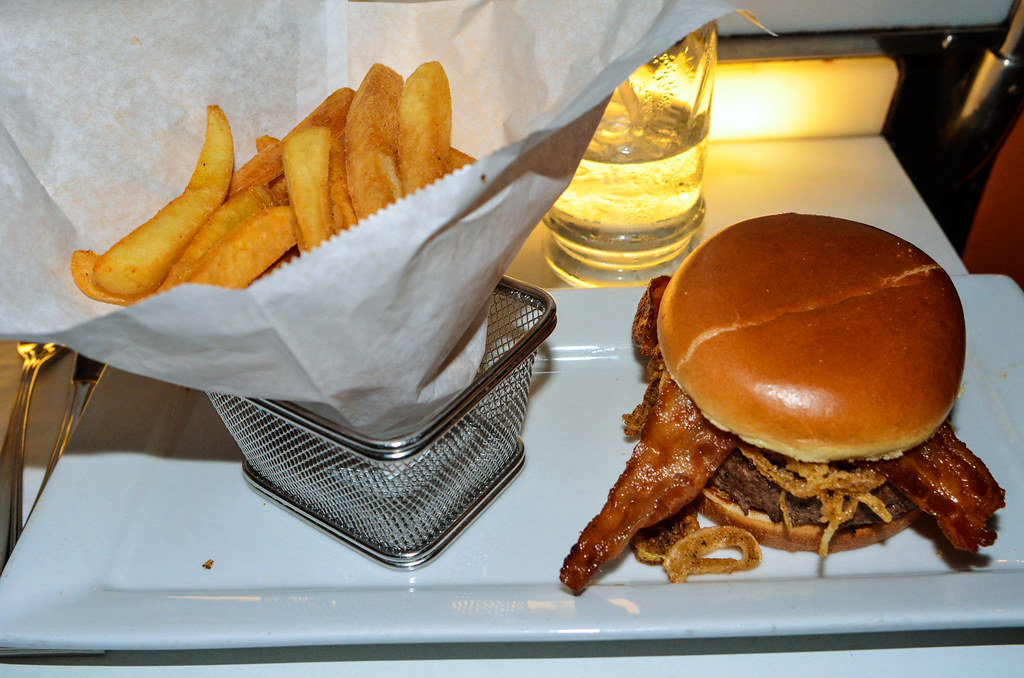 For our main course, we both ordered burgers.  I went with the Drive-In BBQ Burger. There was nothing wrong with this burger, but I wasn’t very impressed.  Everything was cooked well enough but the BBQ sauce was not my favorite.  I did think the bacon was fairly high quality and the hamburger party was nice and thick.  This was a decent burger but I would order something differently if I ever went back to the restaurant. 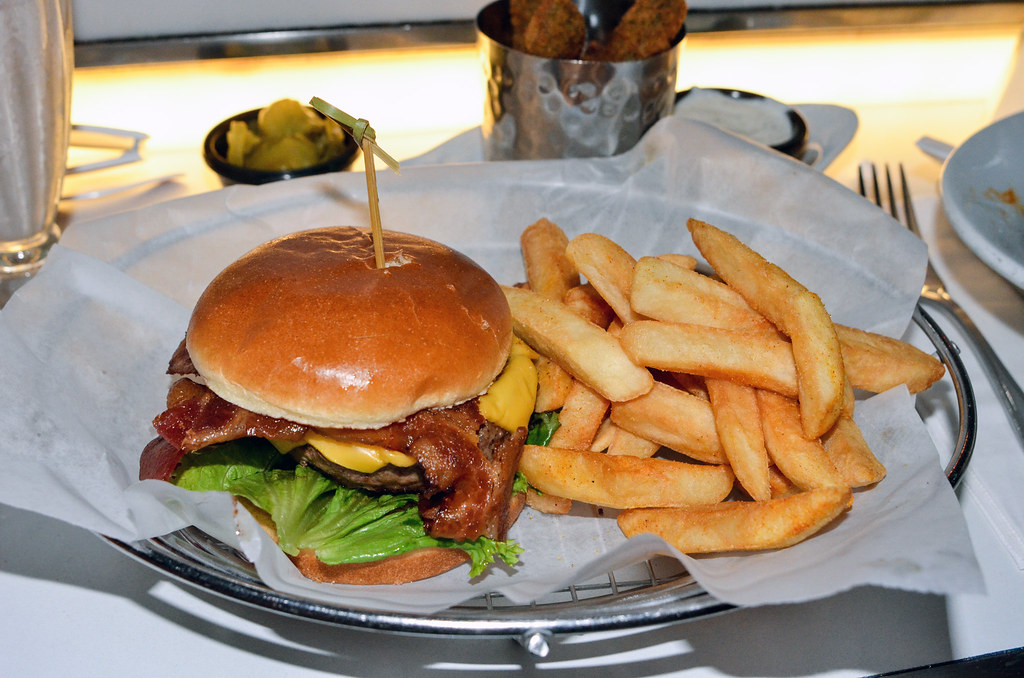 Melissa felt similarly about he Classic American Burger.  There was nothing remarkable here, it was just a standard burger.  Both of our fries needed more seasoning. 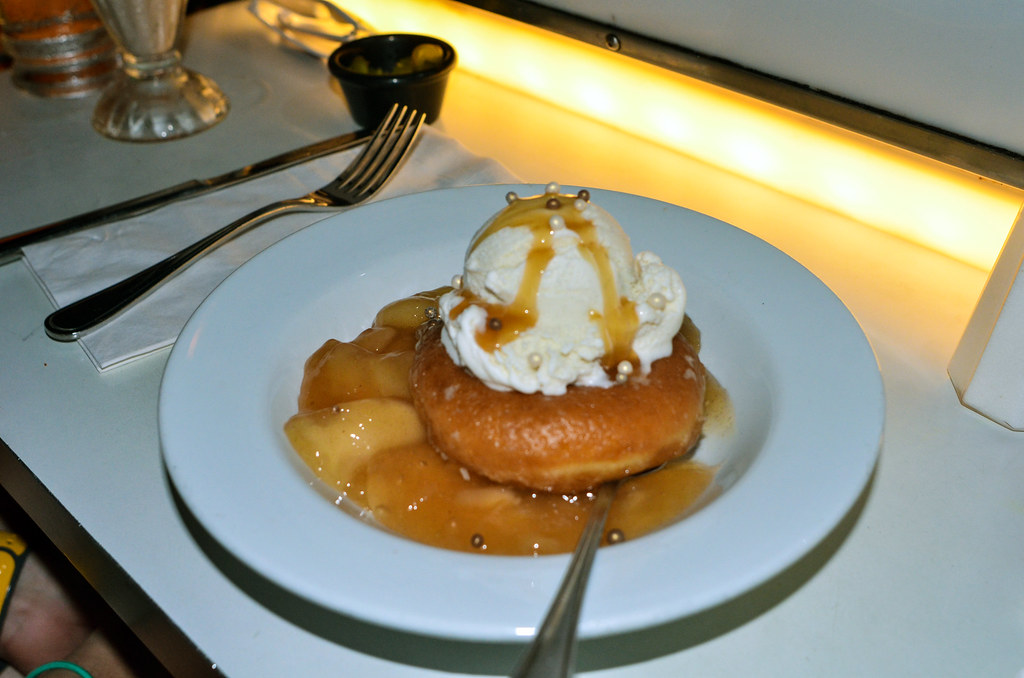 As if our meals weren’t heavy enough, it was time for dessert.  Melissa ordered the Warm Glazed Doughnut.  This had ice cream on top and cinnamon apples underneath.  While tasty, this was incredibly heavy and only so-so ingredients.  It’s just hard to make a doughnut, ice cream and cinnamon apples taste bad.  This was very sweet, obviously. 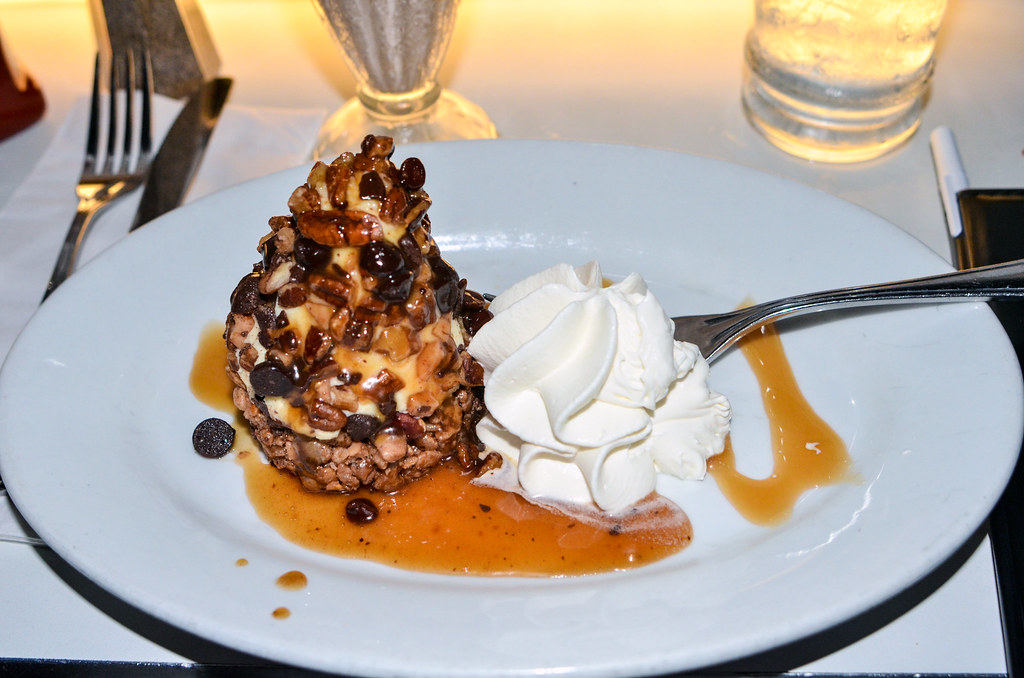 I ordered the Turtle Cheesecake, which I liked much better than the doughnut.  This cheesecake is topped with Heath Bar, pecans, chocolate chips and caramel sauce.  While very rich, the dessert was solid.

Overall, the food at Sci-Fi Dine-In Theater was somewhat lacking.  While not the biggest American food fan in the first place (although I do love a good burger), nothing I ate here really impressed me.  The food was very heavy and nothing we tasted stood out.  With that said, I don’t regret going here.  Experiencing the restaurant’s atmosphere just once was well worth eating here.  If you like immersive atmospheres, have kids, or really enjoy American food then I’d recommend this restaurant.  If none of those fit your list of priorities then you’ll be better off skipping the Sci-Fi Dine-In Theater Restaurant.

Have you eaten at Sci-Fi Dine-In Theater Restaurant?  Let us know in the comments what you think.  Thank you for reading Wandering in Disney, if you enjoy what you’re reading please subscribe to the blog and like our social media pages.  You can do both of those things on the right side of this page.  Have a great day!