Okay, this is a Disney blog.  We make no bones about that, it’s in our header.  But I’m not naive enough to think that Disney isn’t the only one with great theme parks.  I dabble in the worlds that Universal and Knott’s creates for us.  In fact, I even enjoy them.  While I’m partial to Disney I do think that there is interest out there in other theme parks, notably Universal.  I might be way off in that thought but there will be a poll at the bottom of this page for you guys to tell me if you want more Universal content. 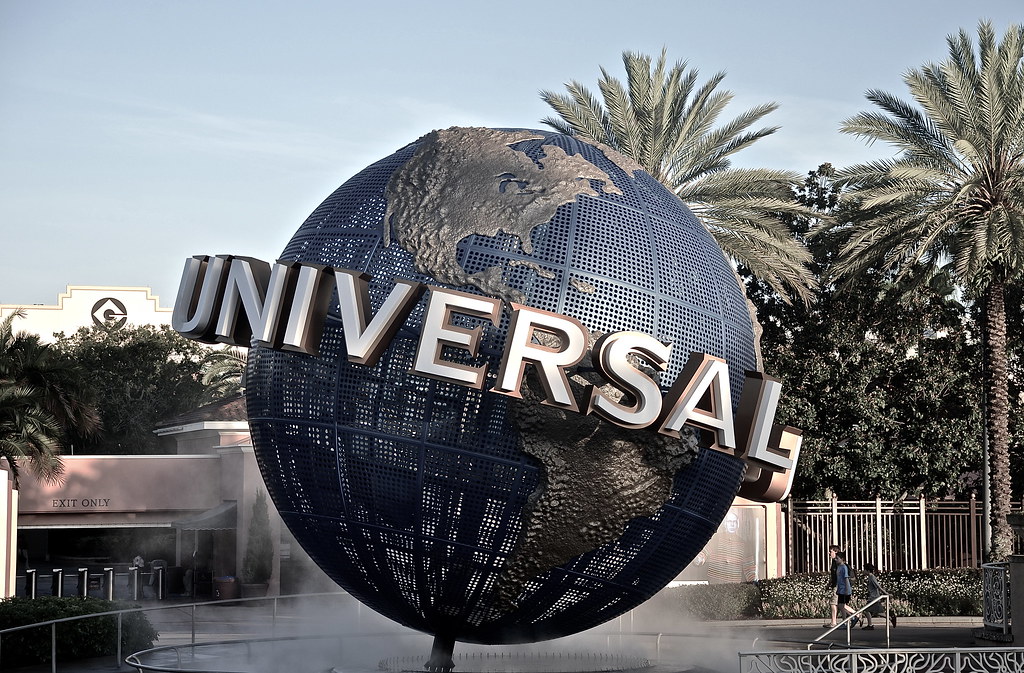 With all that in mind (and seeing how Melissa and I just got back from a few days at Universal), I’m going to start putting out a few Universal Studios reviews and include thoughts on the parks in my trip reports.  Let me know of your interest in these in the comments and then I’ll know if I should keep writing them or not!  Now that we have that out-of-the-way, let’s move on to the Toothsome Chocolate Emporium.

Toothsome sits in Universal’s City Walk and is impossible to miss.  The restaurant looks  like a modern-day Willy Wonka creation.  Toothsome Chocolate Emporioum & Savory Feast Kitchen (that name is way too long) is mainly open for lunch and dinner but they do have an all day breakfast/brunch menu.  The prices have a wide range but most dishes are between ten and twenty dollars. 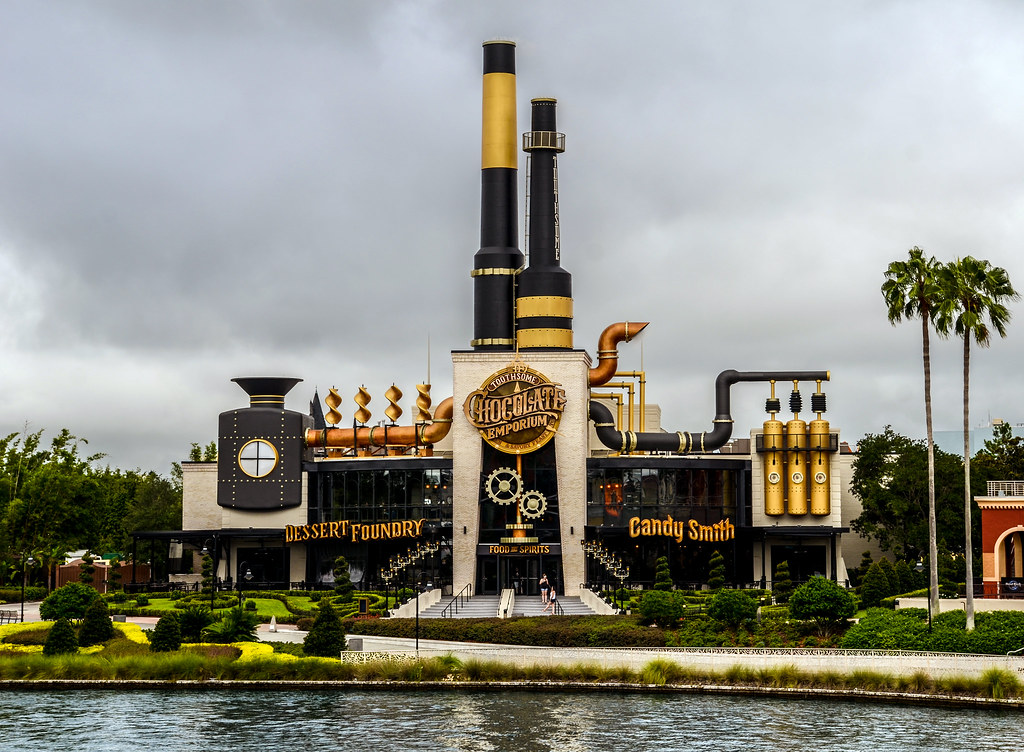 As I’ve already mentioned the outside of Toothsome Chocolate Emporium is something out of a fantasy.  The other buildings in the City Walk pale in comparison to what you see above.  Can you make a building look too good on the outside to the point where the inside can’t measure up? 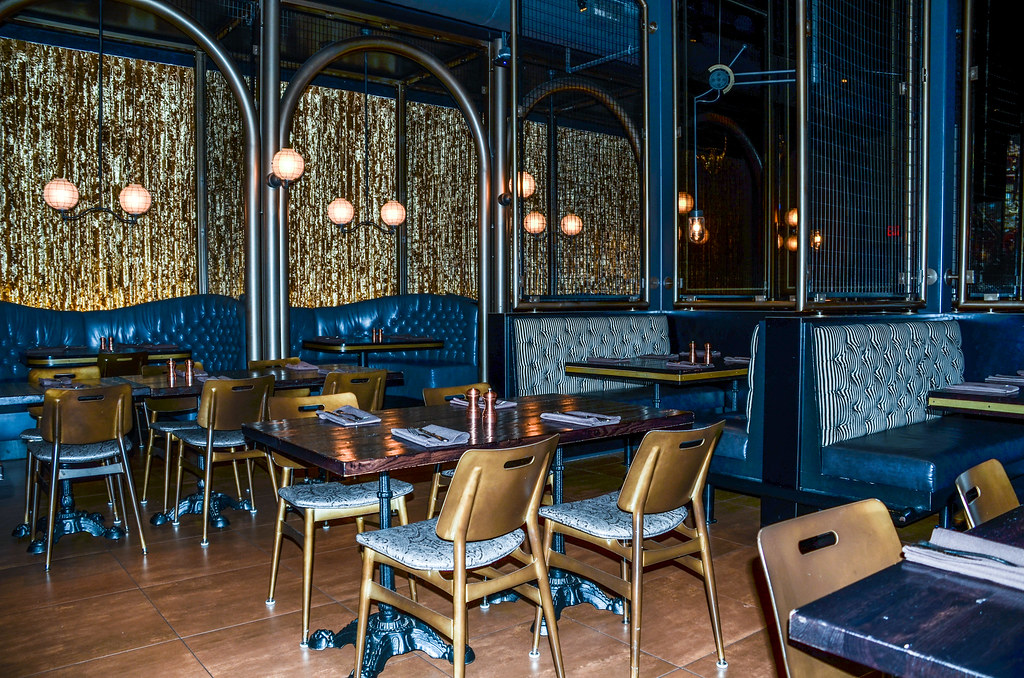 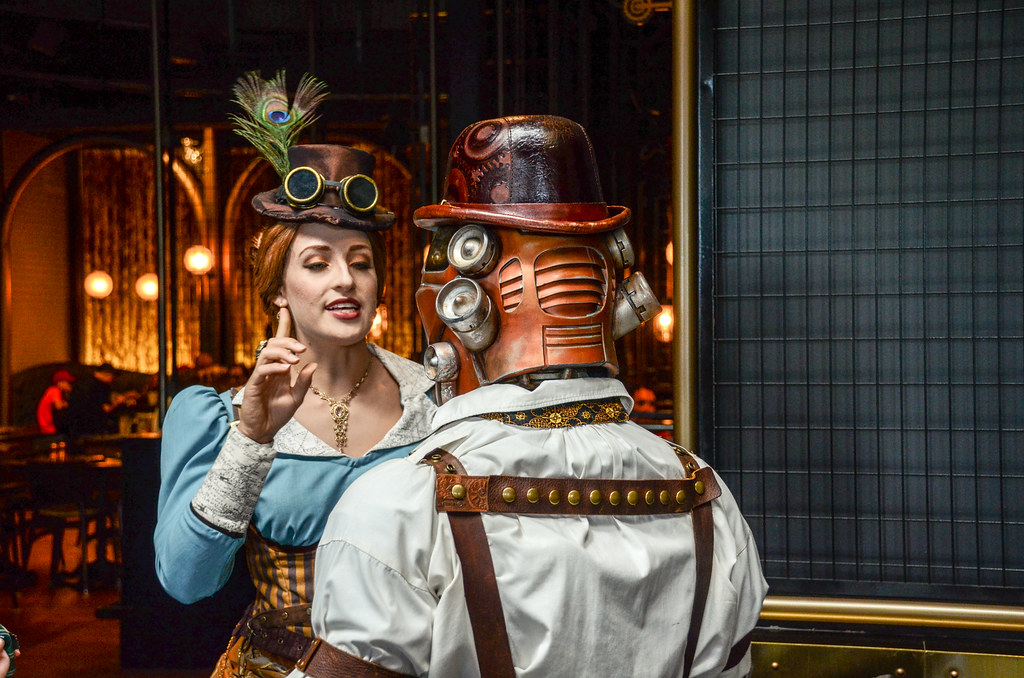 One other weird aspect of the story is that they have characters walking around.  The characters are a robot and lady.  There is a somewhat convoluted back story of the restaurant and characters on the menu.  The lady, a professor, is the founder of this restaurant, as it’s her way to find her family that went to look for her.  The robot is here assistant?  If it didn’t come across that I’m confused by this story and characters then you should know… I’m confused by these characters and back story.  The characters are fine though, although they weren’t very popular at all when we were there.  They just sort of wandered around.  No harm, no foul but I don’t think this added much to the dining experience. 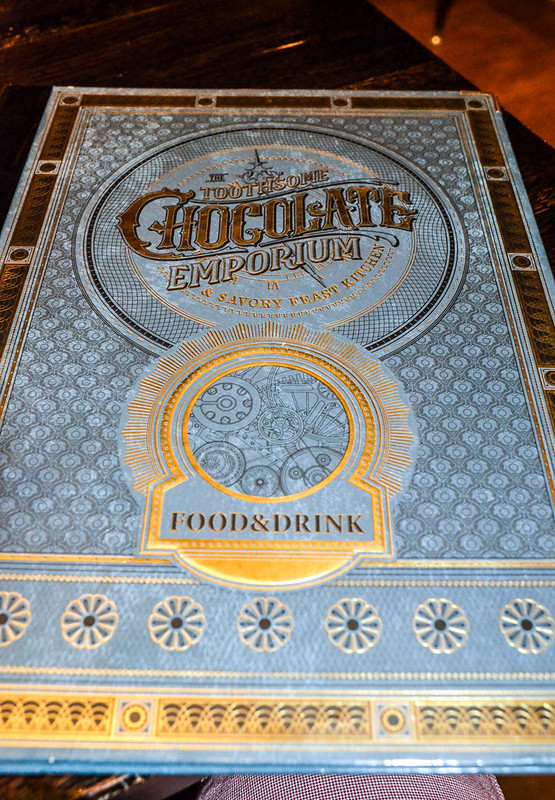 On to the food!  If the title wasn’t clear, we had brunch on this day.  The brunch options were a mix of sweet and savory so we added one of each.  The lunch (or dinner) options looked delicious for what it’s worth. 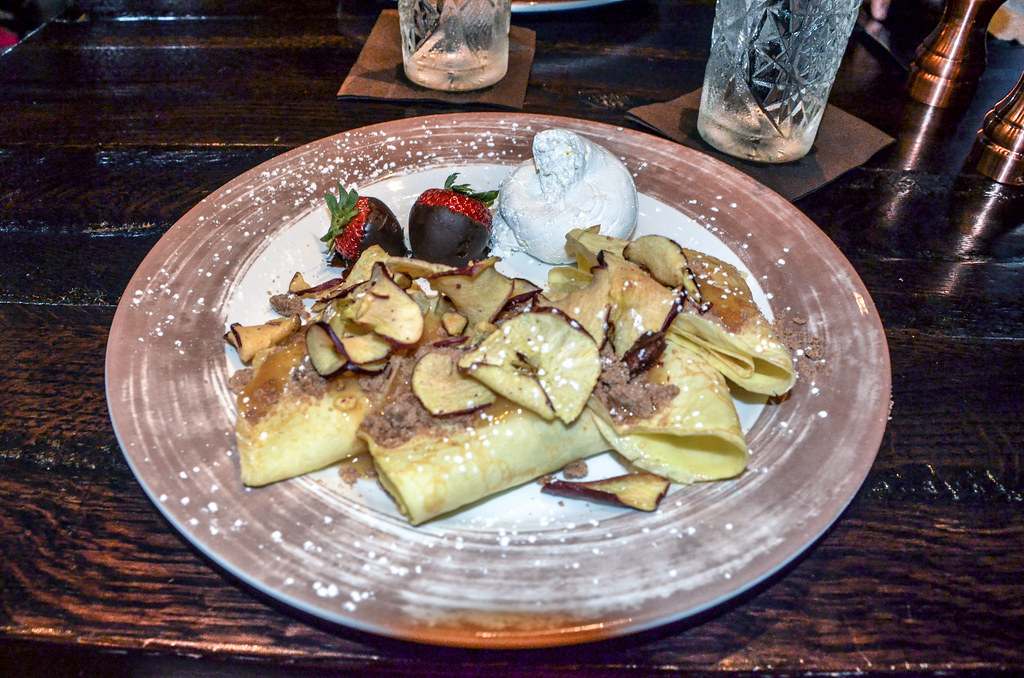 Melissa ordered the Apple Pie Crepes and they were delicious albeit very sweet for a dish.  I liked the apple chips on top and the caramel and cinnamon were an excellent addition.  The inside of the crepe was filled with more cinnamon apples, these ones were baked apples like you’d find in a pie.  The crepes were well made.  I would definitely eat this again, especially if I wanted something sweet. 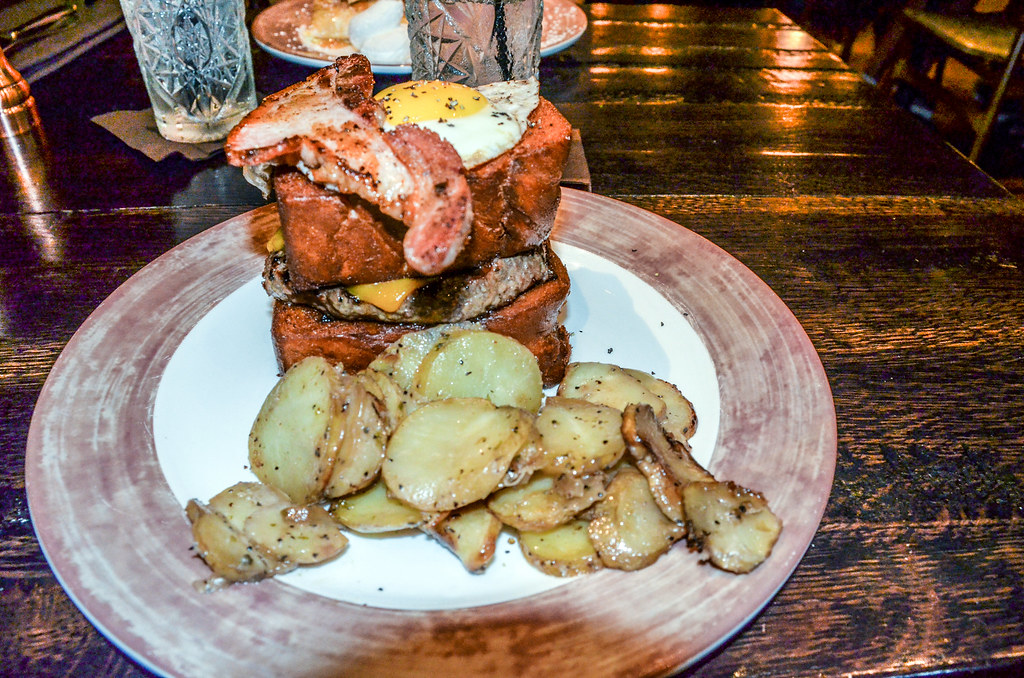 I ordered the Patty Melt French Toast.  This was two pieces of french toast, sandwiching a hamburger patty with cheese.  There was a thick piece of bacon on top along with a sunny side up egg.  The dish also came with potatoes.  Once you get past how unhealthy this dish is then it is incredibly enjoyable.  The french toast was great and the hamburger patty had a great flavor.  I cut open the egged the yoke added even more flavor to the patty melt.  The potatoes were also good and helped cut the taste.  The whole thing was somewhat greasy and incredibly heavy.  Melissa and I shared our two wishes and that worked out really well, although I’m again guessing that the whole thing was very unhealthy.

The food was delicious and I would happily order both items again.  I would guess that any of the brunch items would be well worth ordering.  Both dishes were $13 and I found that to be a good value relative to most theme park restaurants. 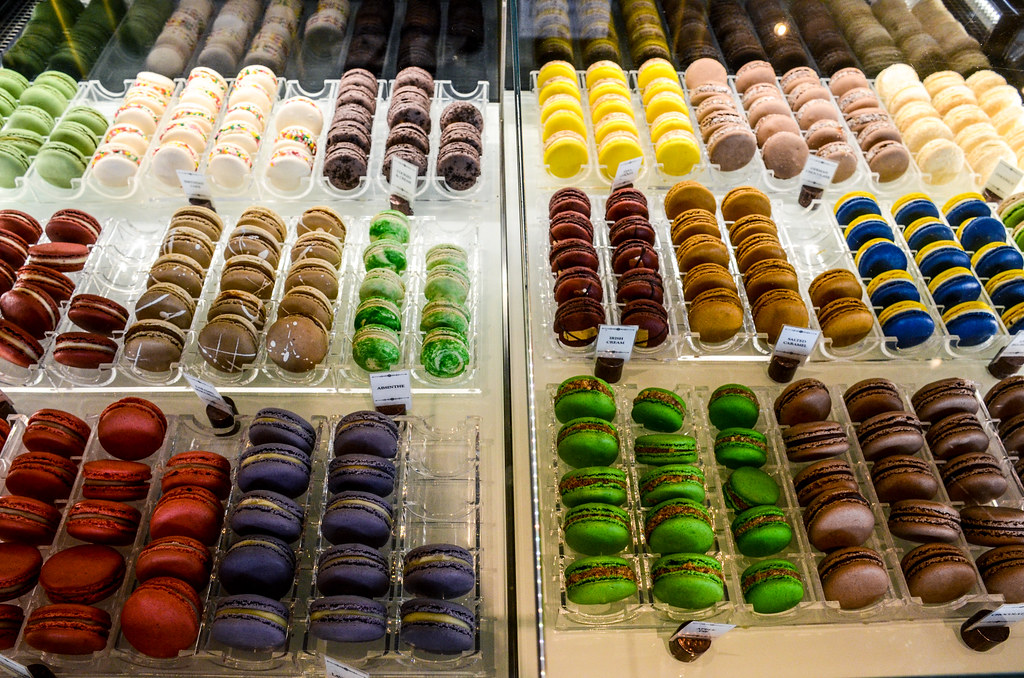 The most disappointing part of the meal was that we were so full that we didn’t have dessert.  We meant to come back and order something from the chocolate bar or candy shop but didn’t.  All of the options looked delicious though, especially the macarons.

Overall, Toothsome Chocolate Emporium & Savory Feast Kitchen was a great dining experience that I would highly recommend.  Both brunch options we tried were better and more creative than any breakfast we’d tried at Walt Disney World. 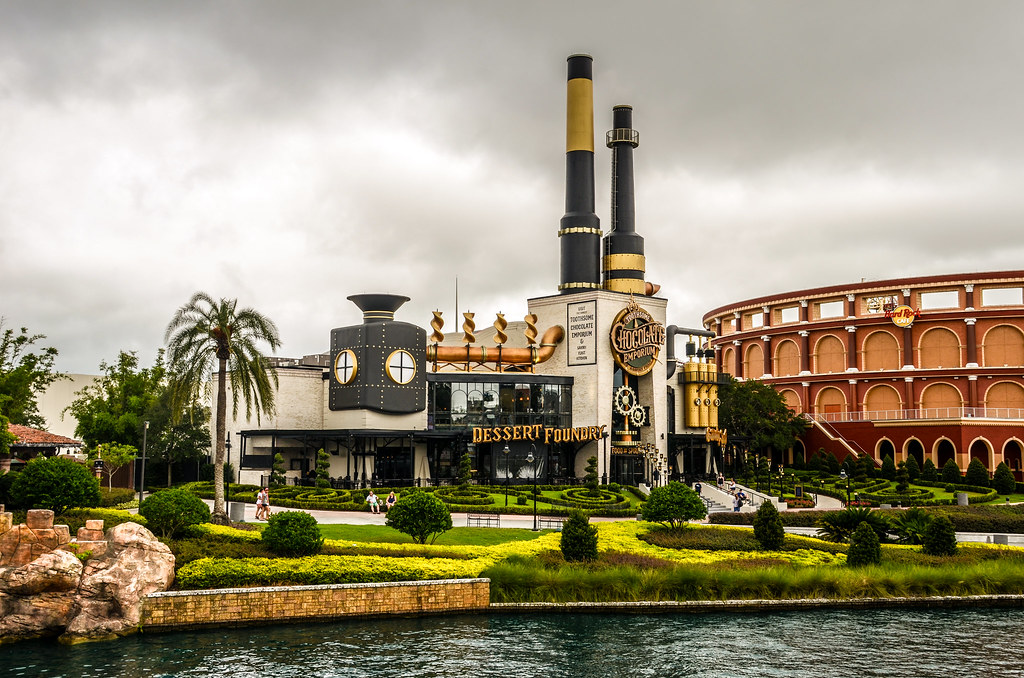 Have you tried Toothsome Chocolate Emporium?  What do you think of adding a few Universal reviews to our usual Disney content?  Please let us know in the comments!  Thank you for reading Wandering in Disney, if you enjoy what you’re reading please subscribe to the blog and like our social media pages.  You can do both of those things on the right side of this page.  Have a great day!