You Can Count On Counter-Service

When casual people, or maybe just me, think of a Disney park, they are bound to jump the great rides, then possibly the characters you can meet or watch in a parade and then they might think of the atmosphere. If you are like me then food was barely on your mind when anticipating a visit to a park. Luckily, my Disney savvy friends, who frequently are wandering in Disney, know more than the casual park goer and readied me and my wife for the grand smorgasbord that we would consume. Before we set off on our grand week-long adventure to Disney World I was most excited for some sit down restaurants. To my surprise, I found most of my positive food memories were not from table service, but from the quick service places. The sit down places were all good. I tried everyone’s food and it was usually pretty quality stuff. Unfortunately, most places left me still hungry. Teppan Edo, in Epcot, filled me up and it was pretty cool to watch someone make your food in front of you and the Ohana was all you could eat so I was full then, but the other places we went left me hungry. I mostly blame my own stomach for this. A regular human would most likely be filled up by the end of their meal, but this post is mostly for the food vacuums like me.

Now obviously every quick service restaurant won’t knock it out of the park, but I do need to bring some of those up. One of the last things I ate was a foot long chili cheese hot dog from Fairfax Fare located in Hollywood Studios. This was not very good and I possibly proclaimed it was “The worst thing I ever ate” while consuming it. I also ate a bad burger at one point that I completely blame on myself for getting. Do not let that get you down though, every other quick service meal that I got was really good to excellent during my trip. If you really wanted to you could skip on the sit down restaurants and only eat the counter service meals and still feast like a king. Let’s begin with the first quick service I ate, which was pulled pork nachos at Captain Cooks at the Polynesian resort. The resort is Polynesian themed, same place where Ohana was as well, so the nachos were Hawaiian themed. The chips were more like potato chips and tasted really nice. I really enjoyed the pulled pork on top which surely influenced me to get more items that included pulled pork in them several times through the course of our trip. 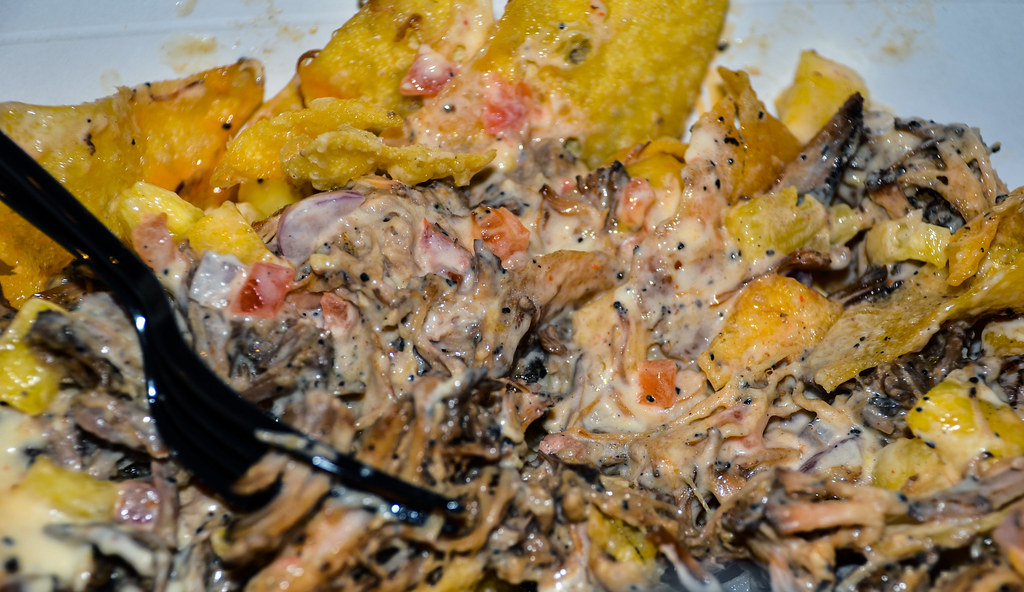 The next counter service meal was probably one of the best you could get with the dining plan. At The Flame Tree Barbecue inside of Animal Kingdom there was a quick service meal you could get that was like an appetizer platter, but instead with meat to the likes of BBQ chicken, a half rack of ribs, pulled pork, jalapeno cornbread and a side of baked beans as well as coleslaw. It was five dollars more than the average quick service meal and like I said if you have the dinning plan it’s a crazy deal because that plan comes with a drink and a snack or desert. Now, I am not going to go on here praising this meal as the best I have ever had, but if you are like me and always have an appetite it was a whole great array of food and still all pretty delicious. For my side snack I got onion rings which were good, but I didn’t really make a dent in them because I was just too full. 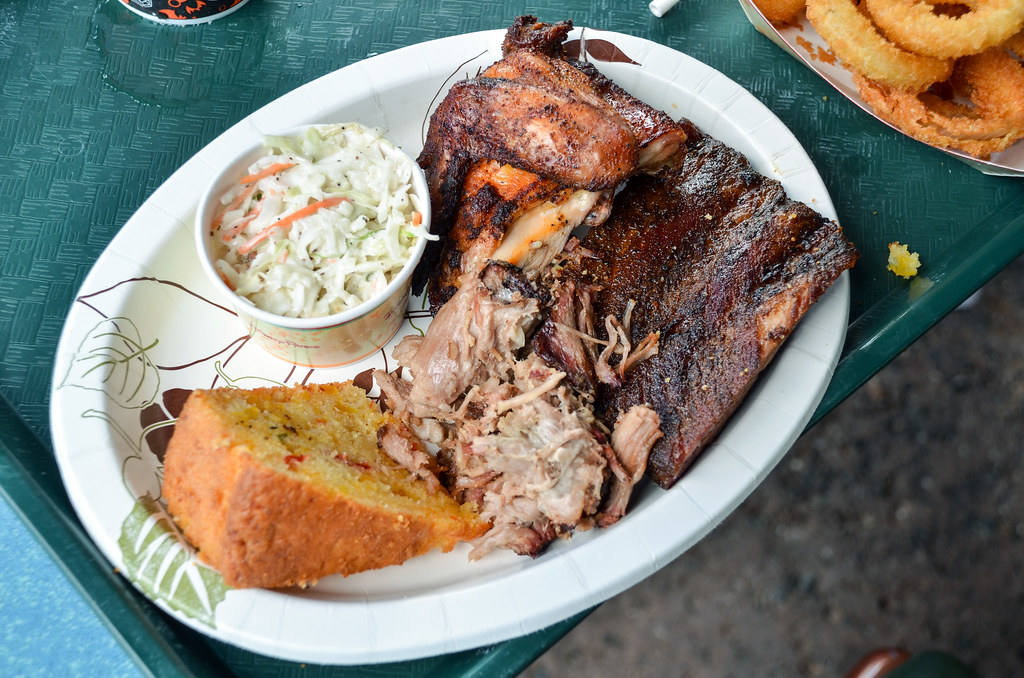 I had a turkey leg here, I believe it was the first night and that is surely a Disney classic. You cannot walk around Magic Kingdom or Disneyland ten minutes without seeing someone scarf down a giant turkey leg. And I was walking around proud being able to be one of those people. I was also proud of myself because it was a delicious choice. I’m not a huge turkey fan, it is probably one of the easiest foods to mess up, but Disney’s is good. For lunch one day we ate at Be Our Guest, which is quick service until dinner then they set up for it to be a table service restaurant. That had some pretty good meat, potatoes and some green beans that I enjoyed quite a bit. Now I really have been saving the best for last. Near Liberty Square in Magic Kingdom is Sleepy Hollow. Here is where they serve an amazing sandwich called the Sweet and Spicy Chicken Waffle Sandwich. This is where the bread is a waffle folded like a taco and in the middle is chicken covered in a delicious sweet and spicy sauce. Also in the middle is a scoop of coleslaw. These are all strange foods to put together, but the conclusion is fantastic. I was determined to have zero repeat meals on this trip and if anything tempted me the most it was going back to the Sleepy Hollow and getting the Chicken Waffle Sandwich.

Now I am no way knocking Disney restaurants here. The experience for some of them was great additions to the trip, like the waiter at Skippers or seeing wild life outside the window while eating at Sanaa. I would say with my first visit that the sit down meals are an essential to a Disney World vacation, but if you are not on the dining plan and need to save a bit of money there is nothing wrong with going to quick service places.