The Plaza Restaurant is a table-service location on Magic Kingdom’s Main Street. With Victorian theme abound, Plaza fits in well with its location, feeling like a soda fountain at the end of Main Street. Plaza Restaurant’s menu focuses on sandwiches, salads and a few specialty items. The restaurant does take part in the Disney Dining Plan, Tables in Wonderland and also offers a 10% annual pass discount. This review will cover our experience at Plaza Restaurant, including photos and thoughts on the restaurants food and value.

Few restaurants at Walt Disney World blend an atmosphere like The Plaza’s with a view. As far as execution goes, Plaza Restaurant knows exactly the vibe it’s going for and nails it. Once inside of the restaurant, the turn-of-the-century diner certainly feels authentic. Part of that feeling is set before stepping into The Plaza, thanks to Main Street’s enveloping environment. Perhaps you were lucky enough to enjoy some live music on the way down the street from a marching band or barbershop quartet to draw you even further into a simpler time.

That’s not to say the atmosphere at The Plaza is very unique or ambitious. On the contrary, I think the restaurant thrives because it fits into the park instead of trying to stand out. No one will or should try to compare The Plaza to Be Our Guest, Sci-Fi Diner, San Angel Inn or other incredible atmospheric restaurants in Disney World. Instead, the restaurant on the corner of Main Street is natural and that’s what makes it an enjoyable experience. 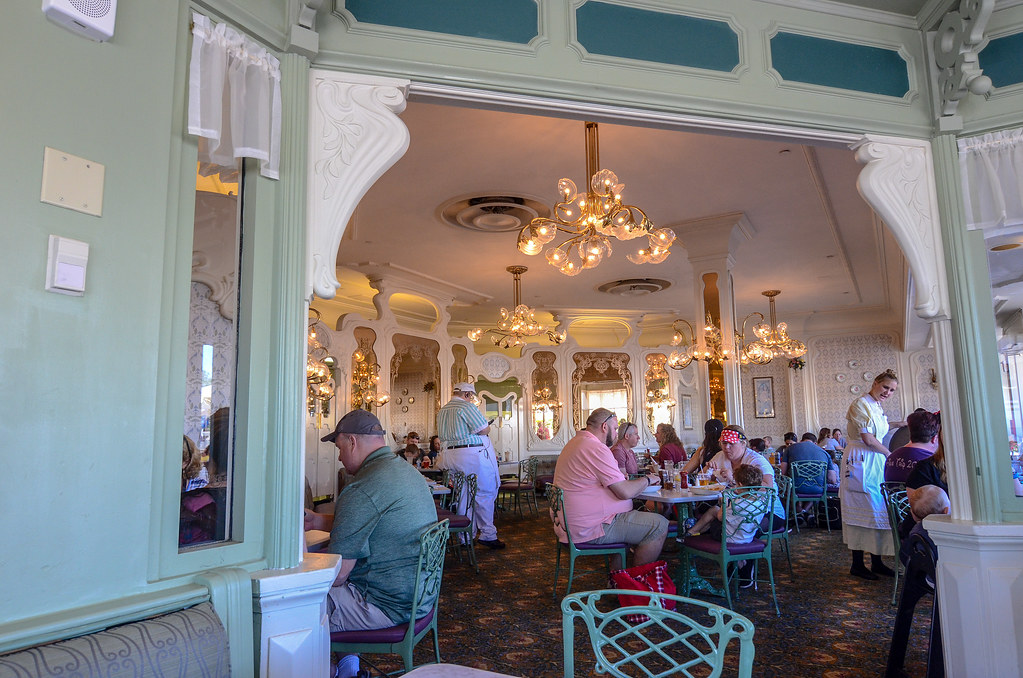 The seating area inside The Plaza is fairly small with Victorian light fixtures and styling. I’d guess that the restaurant has one of the lowest capacities at Disney World, although it is a quicker meal than many. Again, there’s nothing really special about the inside of the restaurant but it is pretty and has that Main Street feeling. The gold, white and mint color scheme is beautiful. Tables and chairs are fairly close together but far from the worst we’ve experienced at WDW. 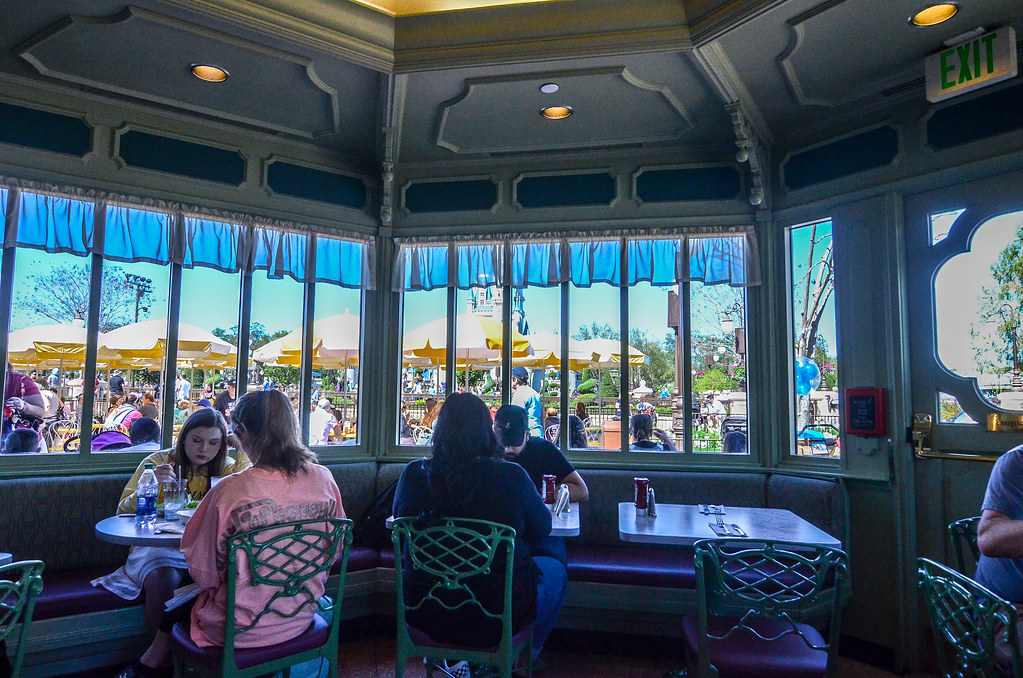 There are windows throughout the restaurant to give guests a view of the castle just a few steps away. The umbrellas block the view to a degree but I’d still request a window seat if you aren’t pressed for time. This view is not only a prime spot to look at the castle but a great place to people watch. As much as I like the decor and theme of The Plaza, the view while eating is what really sticks out.

As for the food, The Plaza keeps it pretty simple. Here’s a look at the menu. We were there for lunch and I was interested in several items all the way down the menu, so we’ve ended up having an appetizer, two entrées and dessert at the restaurant. With an affordable menu, this shared 3-course meal made the experience even more enjoyable because Melissa and I both like trying different items. 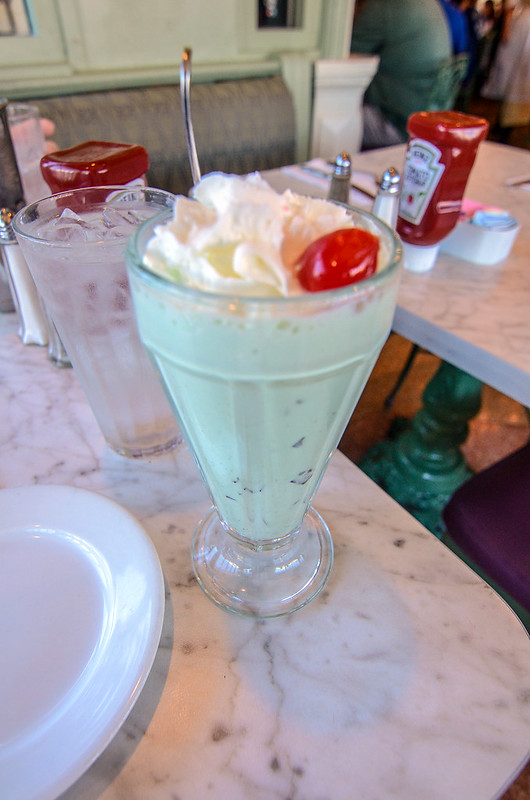 I should mention that we also had a milkshake. They are bottomless milkshakes here. Like all of the food we ordered, we shared this. It didn’t seem to be frowned upon but we were also fairly coy in our effort to share. The milkshake was good – creamy with the right amount of thickness and made with good ice cream. 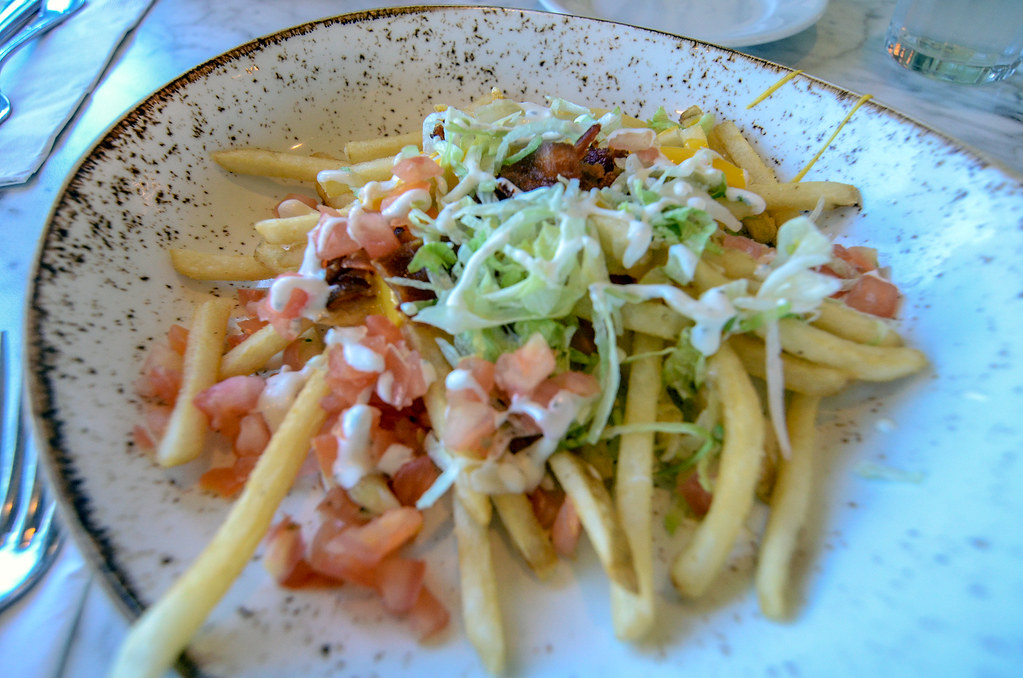 For our appetizer we ordered the Plaza Loaded Fries. These were French Fries with Melted Cheese, Tomatoes, Lettuce, Bacon and Ranch Dressing on top of them. This dish was way better than it had any business being. Melissa was surprised by how much she liked this, as well. The Melted Cheese wasn’t overdone and the Ranch added a little zing to an otherwise heavy dish. While it looks plain and maybe not extremely appetizing, I would go back just for the Plaza Loaded Fries. Coming in at $9, this is cheaper than most appetizers. 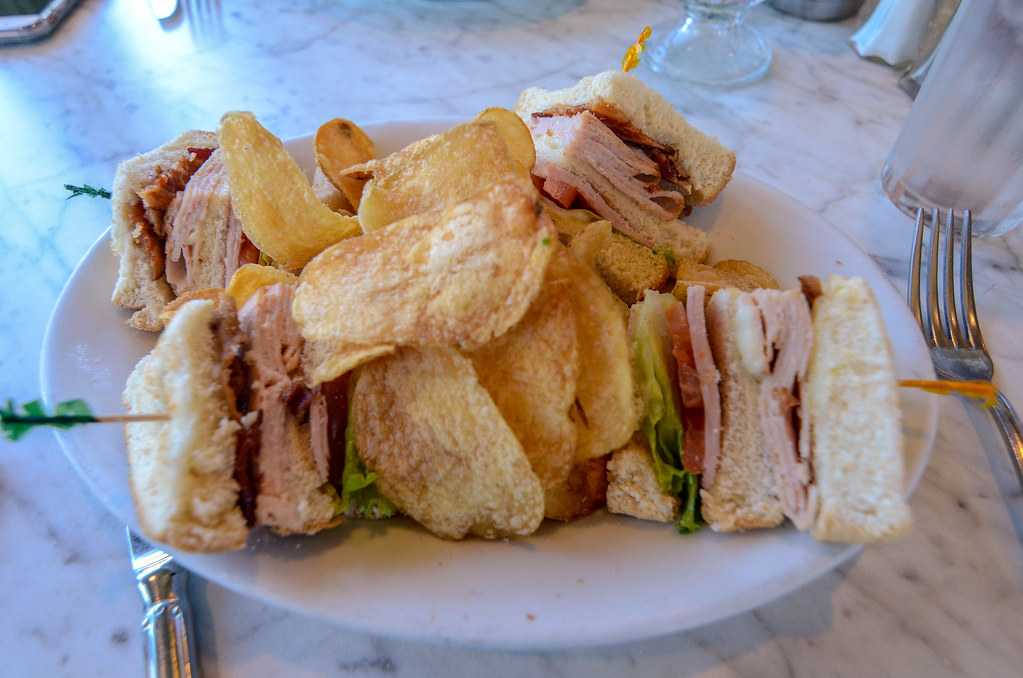 For one of our entrées, we ordered the Plaza Club which included Ham, Turkey, Bacon, Lettuce, Tomato and Mayonnaise. I’m a sucker for Club Sandwiches and this was a good one. There was a large portion of meat that we both enjoyed. This dish isn’t going to blow anyone away but it’s a very good sandwich and a large portion making it easy to share. The homemade chips were good but somewhat forgettable. While the price of $17 is a little steep for a sandwich, this is a large portion and $17 is one of the cheaper entrees at any table-service restaurant in Disney World. 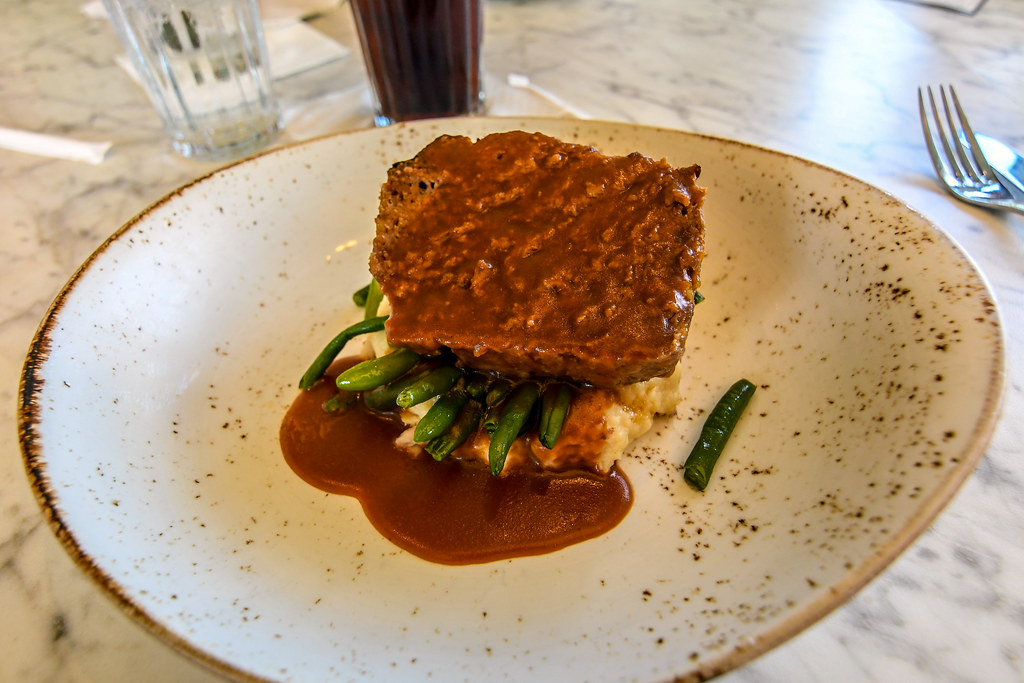 We’ve also tried the Home-style Meatloaf and found this to be a good, hearty option. The Meatloaf is served with Mashed Potatoes, and Seasonal Vegetables. I think most Meatloaf is pretty hit and miss but this one was a hit. The meat was of good quality and the gravy, which was the predominant taste, had a good flavor and was fresh. The Green Beans were fresh and added a nice token veggie. Likewise, the Mashed Potatoes were smooth and paired well with the dish. At $22, this is a decent option and is very similar to Carnation Cafe’s in Disneyland. In fact, I wouldn’t be surprised if they share a recipe. 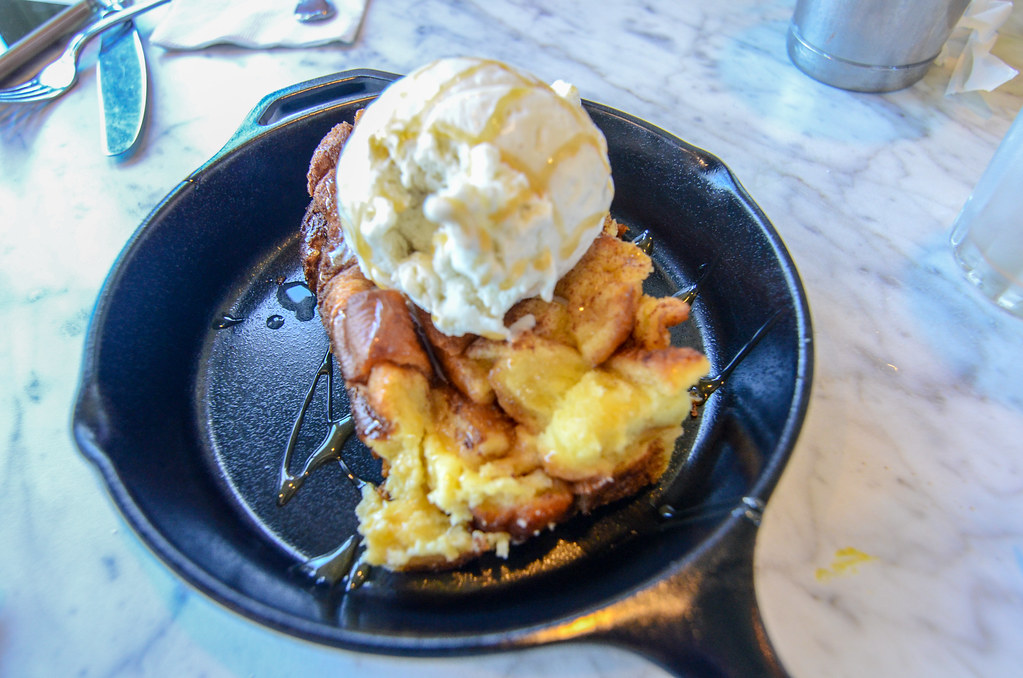 Both the appetizer and dessert were the standouts. We went with the Butterscotch Bread Pudding for dessert and I’ve been craving it ever since. Disney World has no shortage of quality bread puddings and this is in the top two along with Ohana. I might like this one more but please don’t make me pick. The Butterscotch Bread Pudding was dense and avoided being dry. The portion is definitely big enough to share and the dessert is very sweet. Having it topped with ice cream adds a little depth of flavor to the bread pudding. This is one of my favorite desserts at Disney World. A well worth it $9. If ice cream is more your thing, The Plaza has some fun sundaes made right next door in the ice cream shop.

Overall, The Plaza Restaurant quickly became one of our favorite Magic Kingdom table-service locations. That’s admittedly a low bar but The Plaza fills a void, offering quality food at prices that are more consistent with counter-service restaurants. If you are on the Disney Dining Plan you can definitely find a better value. If paying out-of-pocket, The Plaza would be pretty high on our list because of the value offered. The menu’s ambition won’t blow anyone away but the food is good and the prices are even better. We’d recommend doing the Loaded Fries and a dessert or two and then maybe splitting an entrée. Combine the value of the food with an atmosphere that blends in perfectly with Main Street and we came away very happy with out experience.

Have you dined at The Plaza Restaurant? Let us know your thoughts or any questions you might have in the comments below. Planning a trip to Walt Disney World? Check out our Disney World Trip Planning Guide to help you out. If you enjoy what you are reading here on Wandering in Disney please share this post with your friends, as well as like our social media pages. You can also subscribe to the blog via WordPress or email. All of those links are on the right side of this page. Thank you for reading, we really appreciate it!