Via Napoli is an Italian restaurant in Epcot’s World Showcase. The restaurant offers pizza and pasta dishes. Via Napoli is a table-service restaurant that counts as one credit on the Disney Dining Plan. They do accept Tables in Wonderland and have an Annual Pass discount. This review will include photos and thoughts on our experiences at Via Napoli as well as whether the restaurant holds a good value. 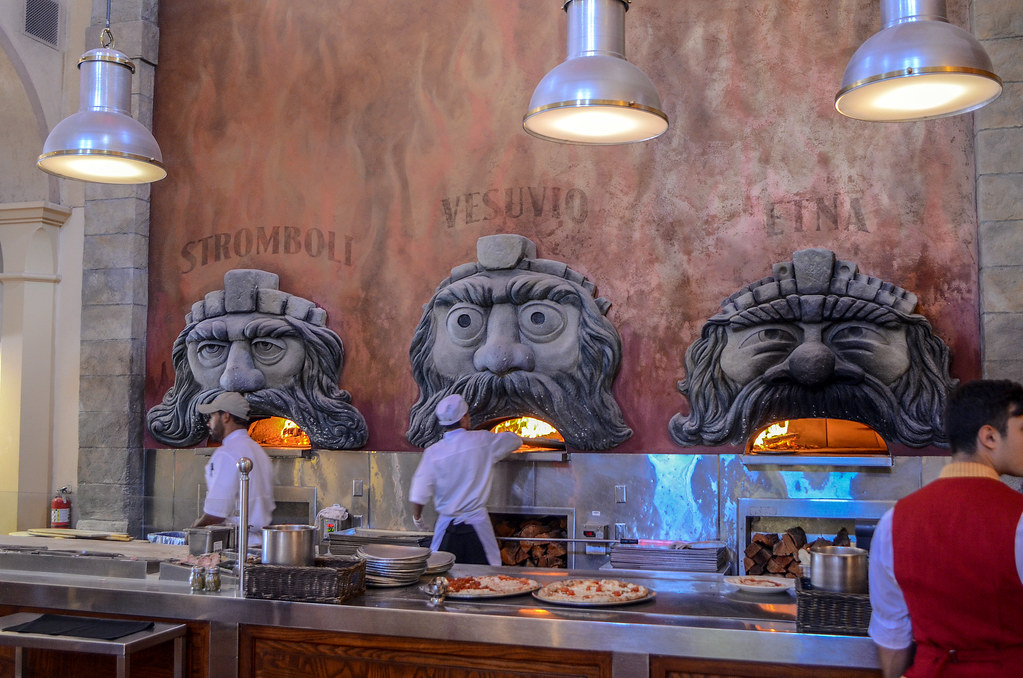 Via Napoli’s specialty is their wood-fired pizza and the restaurant was designed to showcase just that. The focal point of the open-kitchen that most tables can look into is the wood-fire ovens. These three ovens are faces that each have names – Etna, Vesuvius, and Stromboli. All of those are names of volcanoes in Italy. It’s a nice focal point of the restaurant, as the ovens aren’t comically big but good eye candy. 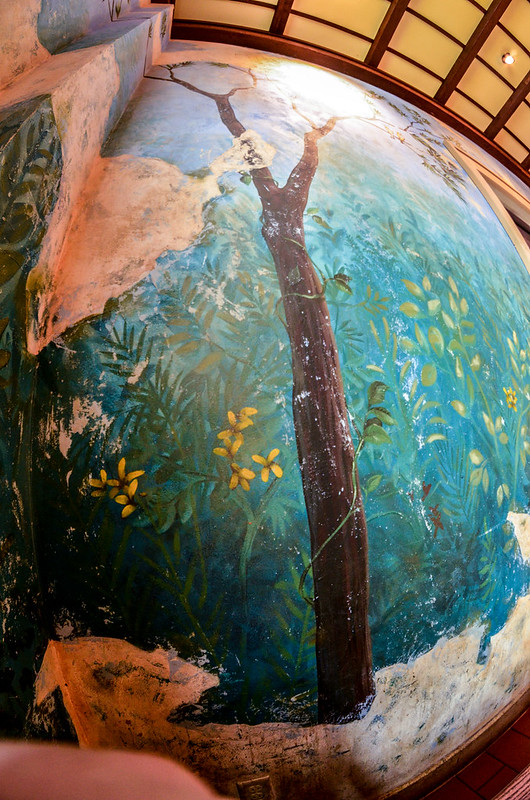 I think Via Napoli is very versatile, partially because of the environment. There is space enough to have a fun date while surrounded by beautiful paintings and colors. On the other hand, this is also a great place for a large family to share a couple of pizzas. I was somewhat surprised at how much I liked the atmosphere. Via Napoli isn’t inside of a castle and doesn’t have big windows that offer incredible views but the restaurant is beautiful nonetheless. 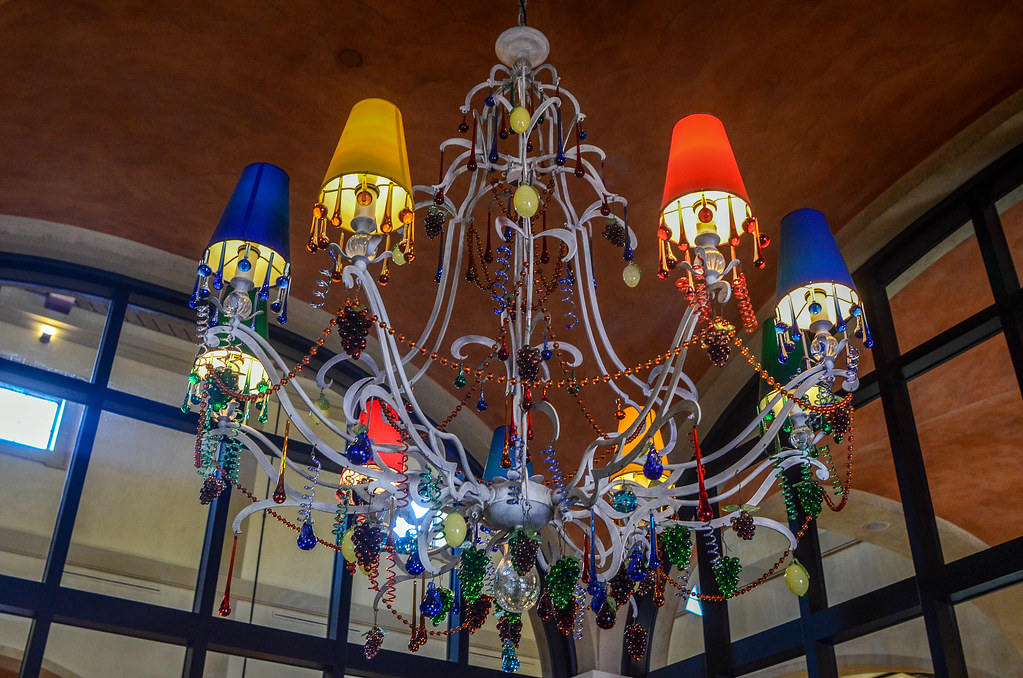 Moving on to the food, Via Napoli offers a pretty large menu as far as Disney restaurants go. You can see that here. I guess that I shouldn’t be surprised at the larger menu, as it’s not very hard to offer lots of varieties of pizza. Most of the pizza options are more authentic than your typical American pizza joint. Rightfully so, as this is supposed to replicate a pizzeria in Italy. With that being said, it shouldn’t be hard to find something that you like assuming that you and yours are a fan of pizza. 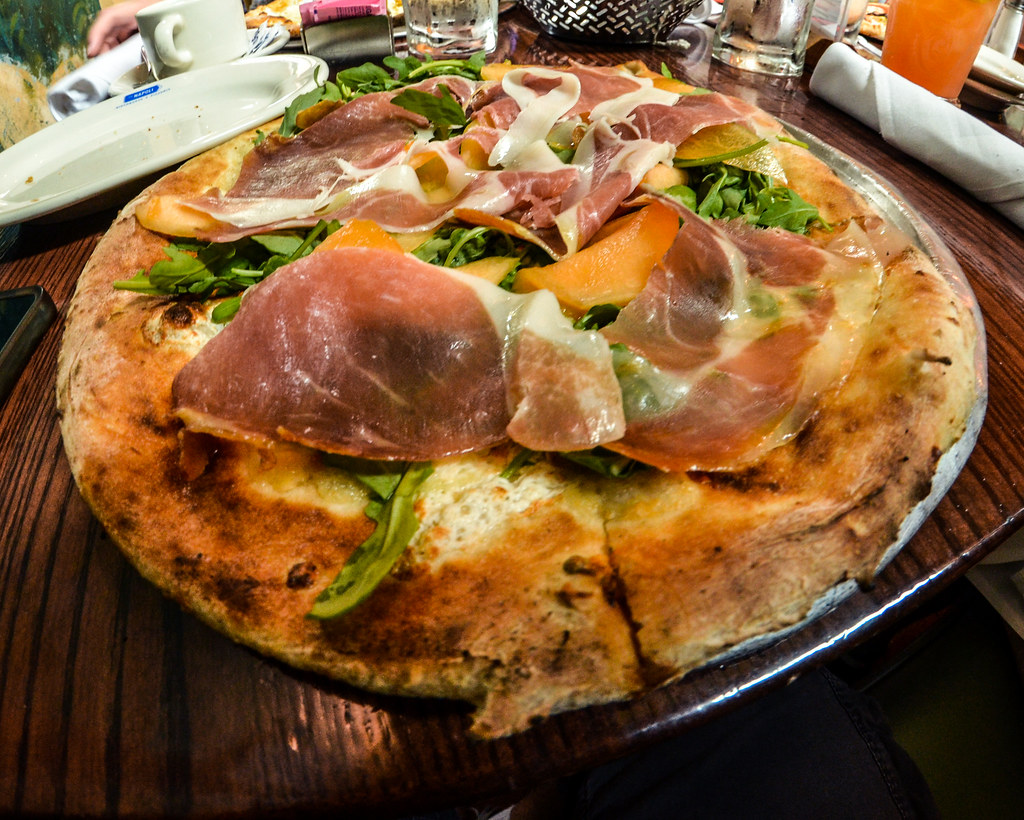 We’ve tried several pizzas at Via Napoli, my favorite being the Prosciutto e Melone. This was a white sauce pizza with prosciutto, arugula, and cantaloupe. I’m partial to white sauce pizzas and this was no exception. The prosciutto was very thin and had a wonderful flavor that was definitely balanced by the arugula. The cantaloupe was a bit of a shock at first (and will be for those who are used to standard American pizza choices) but with every bite of the melon I enjoyed it more and more. After a while the cantaloupe became my favorite part of the pizza. It made the dish feel refreshing instead of heavy. All of these ingredients combined to give the pizza quite an array of complimentary flavors. I would happily order this one again but it may be pretty adventurous for some. 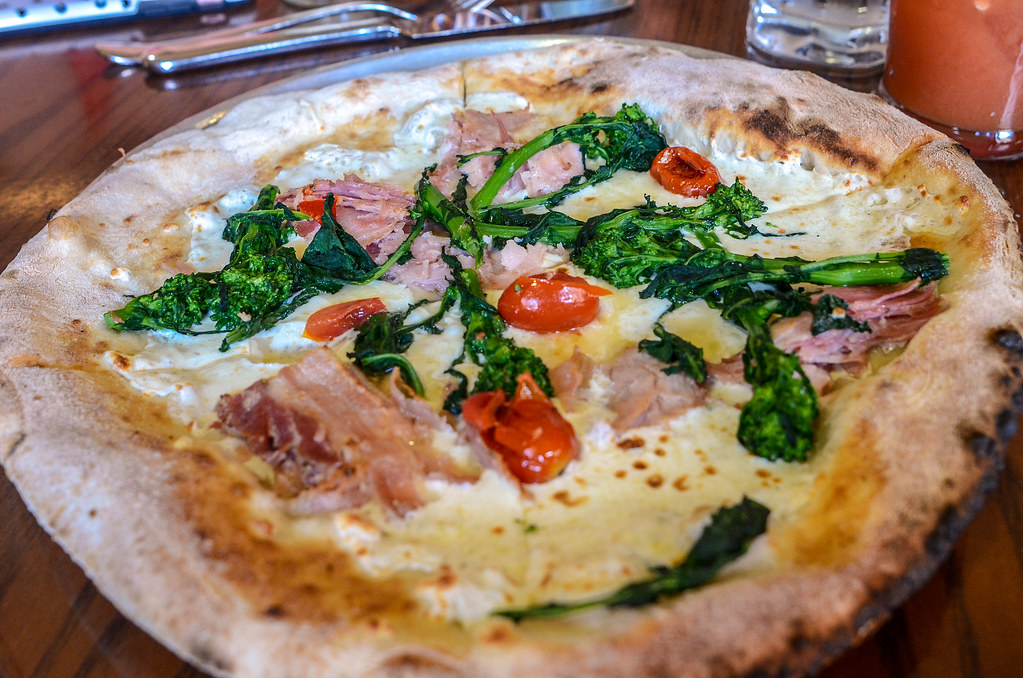 Melissa’s favorite dish that she’s tried is the Broccolini Pizza. This pizza is served with cherry tomatoes, mozzarella, porchetta, robiolla and broccolini. Like the melon on the pizza, this tasted very fresh and was surprisingly light. All of the ingredients were excellent, there’s a reason Melissa keeps coming back to it. 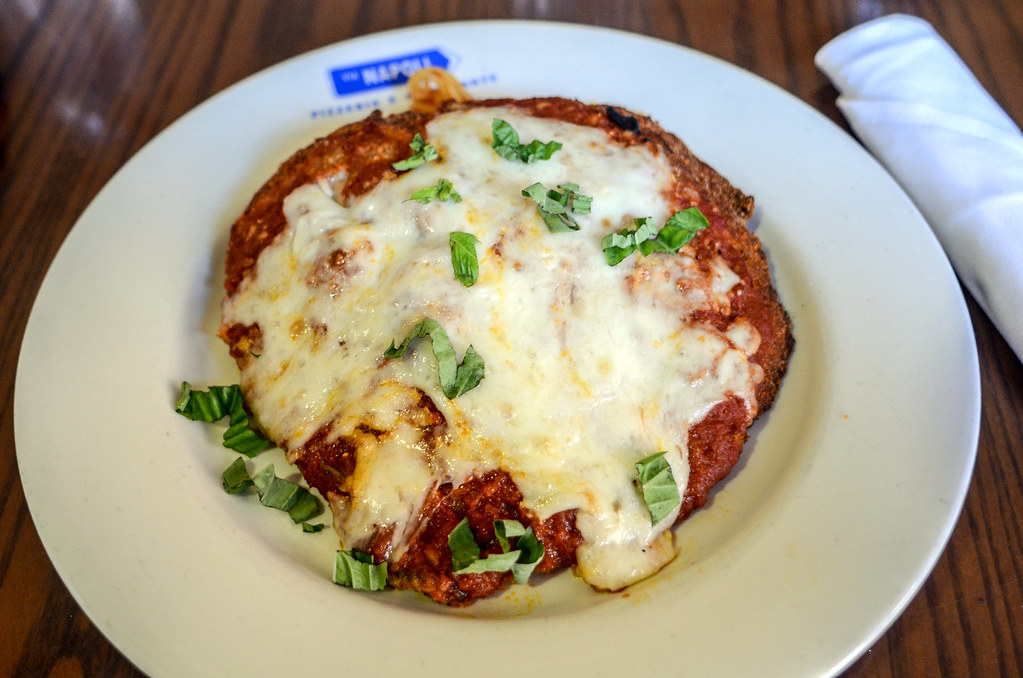 As far as pasta dishes go, I tried the Pollo Parmigiana and came away impressed. This came with a giant piece of breaded chicken served on top of spaghetti pomodoro. The chicken was tender and juicy, full of flavor. The tomato sauce on top of the dish was excellent as was the giant helping of cheese. Yes, the chicken was over-the-top big and I didn’t finish it all but I was impressed by the dish.

Whether you should go for pasta or pizza at Via Napoli is a difficult choice. In our experience both choices are excellent. Individual pizzas hover around the $20 range, sometimes going a few dollars over. Pasta is generally closer to $30 but there are exceptions. I’d recommend just going with personal preference when it comes to deciding on your dish. The one exception being if you are on the Disney Dining Plan then the pasta, seafood and steak dishes are a better value. 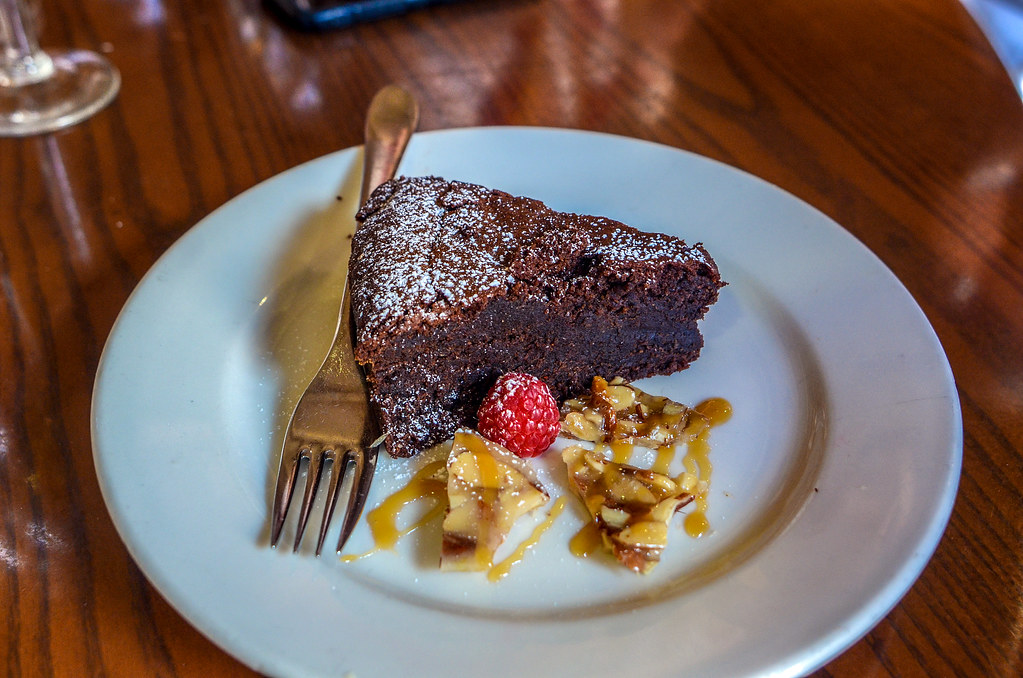 We’ve tried several desserts at Via Napoli. I’ve had the Ice Cream Soda which I thought was good, not great.  I’m by no means an ice cream soda expert but there wasn’t a big difference between this one and others I’d had before.  Still, I liked it well enough. 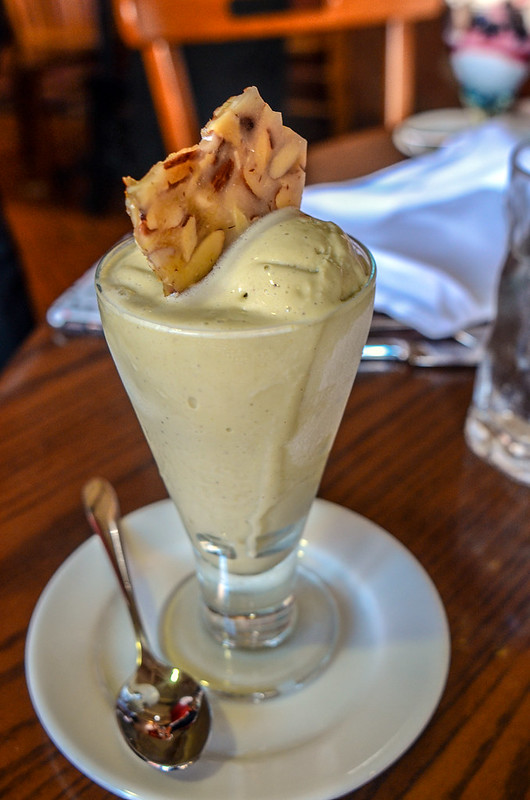 Melissa went with the gelato and this was a better choice. I liked this but didn’t think it was any better than other gelato I’ve had. In other words, the dessert here was good but nothing out of this world. For the record, one of our friends had the tiramisu and really liked it.

My favorite dessert I’ve had at Via Napoli is the Zeppole di Caterina. The donuts are a bit heavy, especially after chowing down on a pizza or Chicken Parmigiana, but they were delicious. These were ricotta cheese fritters served with whipped cream and chocolate sauce. While it’s my favorite dessert I’ve tried, it still didn’t blow me away. The last time we dined at Via Napoli, several others in our party ordered the Coppa di Brutti Ma Buoni and raved about it ever since. I’ll be trying that one next time! 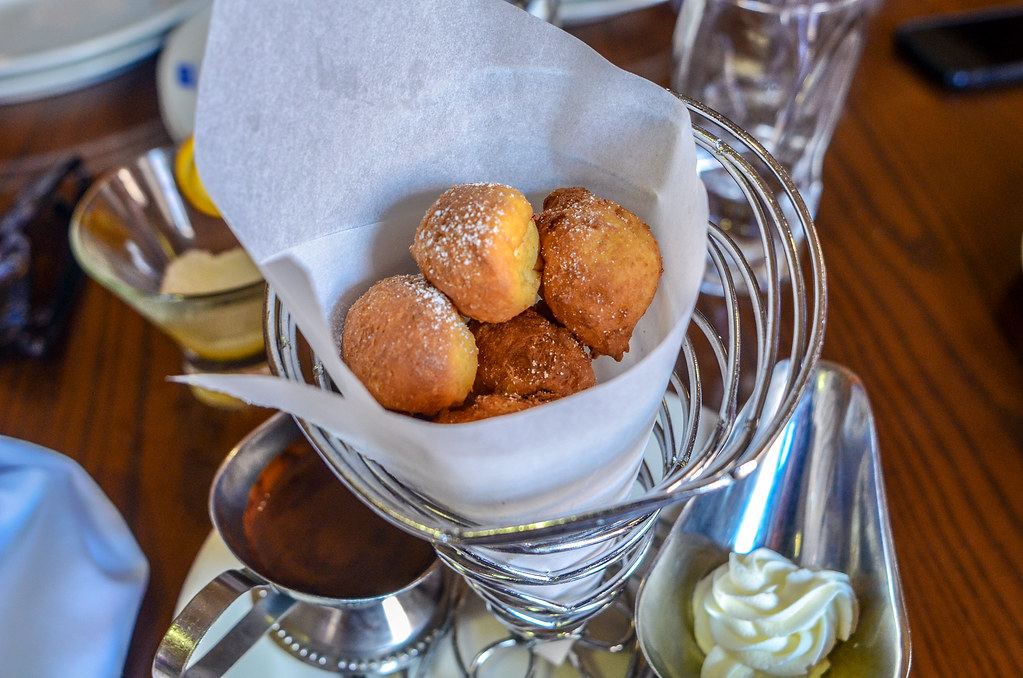 Overall, I think Via Napoli is one of the better restaurants at Walt Disney World. The place is versatile and has something for everyone. I thought the environment was simple but beautiful. The food was very good and if you love pizza this is probably the best choice of anywhere on property. I also think the meals are a decent value if you are sharing a pizza. It’s more expensive than your local pizza joint but compared to other Walt Disney World restaurants there is value to be had here. On top of that, all of our meals at Via Napoli have been excellent making this Disney World’s best Italian theme park restaurant. 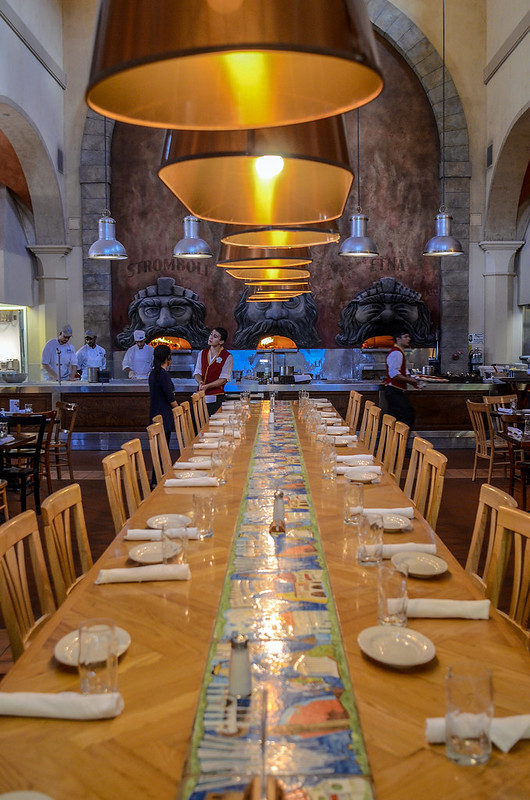 Have you been to Via Napoli? Let us know your thoughts or any questions you have in the comments. Planning a trip to Walt Disney World? Check out our Disney World Trip Planning Guide to help you out. If you enjoy what you are reading here on Wandering in Disney please share this post with your friends, as well as like our social media pages. You can also subscribe to the blog via WordPress or email. All of those links are on the right side of this page. Thank you for reading, we really appreciate it!