Port Orleans – French Quarter quickly became one of our favorite Walt Disney World hotels. The thematic elements make the resort charming and inviting, invoking an idealized version of the French Quarter in New Orleans. Sassagoula Floatworks follows that trend of theming… Sort of. The story behind the restaurant is that it acts as a storage area for Mardi Gras parade floats. There is enough decor in Sassagoula to let you know that’s the story of the restaurant but it’s not an overbearing or even immersive theme. 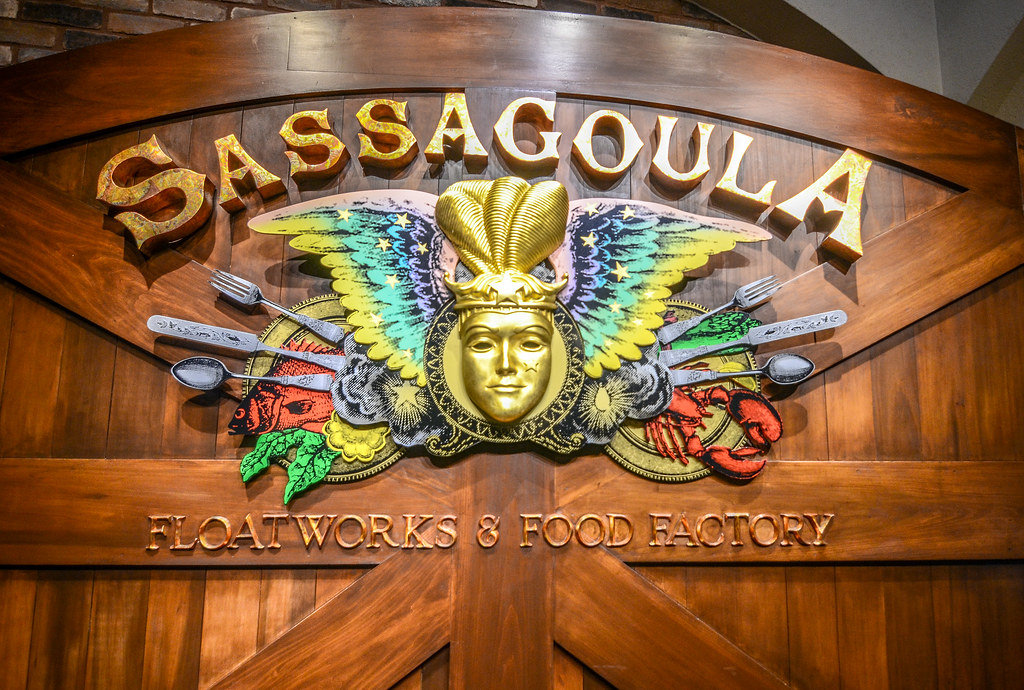 That’s not to say the theme isn’t executed well. At some point, Imagineering has to be realistic about what makes a counter-service restaurant enjoyable. A storage warehouse isn’t the most appealing place to eat. For that reason, all of the props and ‘floats’ are kept above guests and not taking up space on the ground level. There are oversized cards, masks and plenty of other fun props to look at. No, it’s not that interesting of an environment but there are far worse at most Disney World restaurants.

If the weather cooperates, sitting outside would be a good option. There are plenty of tables outside of Sassagoula where you could soak in the atmosphere of a great resort. Scat’s Cat Club Lounge is also right outside of Sassagoula and often features live music at night. If you are looking for a place with air-conditioning to enjoy your counter-service meal then Sassagoula Floatworks will do just fine. If you are looking for an excellent atmosphere then there are plenty of options right outside of the restaurant.

Moving on to the food, here’s a look at the menu. In recent years, Disney has expanded the menu and quality of food in hotel’s counter-service restaurants, especially those without any table-service restaurant. Port Orleans – French Quarter fits that bill as Port Orleans – Riverside is the hotel with the table-service restaurant. With that in mind, Sassagoula offers a large variety of food including Cajun, Po’ Boys, Pizza, Pasta, Sandwiches and a ‘Carving Station’ with heartier entrees. There’s also a Bakery Shop that offers desserts. All of those locations are open during dinner hours. 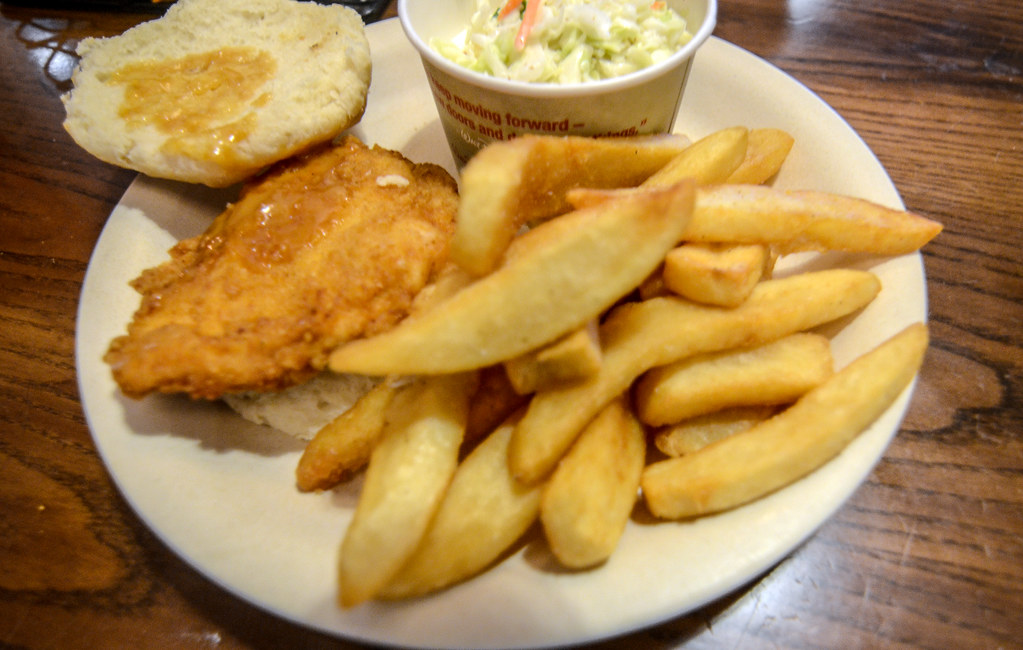 We tried several dinner entrees. Let’s start with the Chicken on a Biscuit Sandwich. This was a Fried Chicken patty on a Biscuit with Bayou Barbecue Sauce. Frankly, I wouldn’t get this again. The sandwich was very dry as there wasn’t enough barbecue sauce to mask the dry biscuit and patty. We both did enjoy the fries as they were different than the usual Disney World fries and tasted fresh. It was $11 for the sandwich and I do not recommend it. 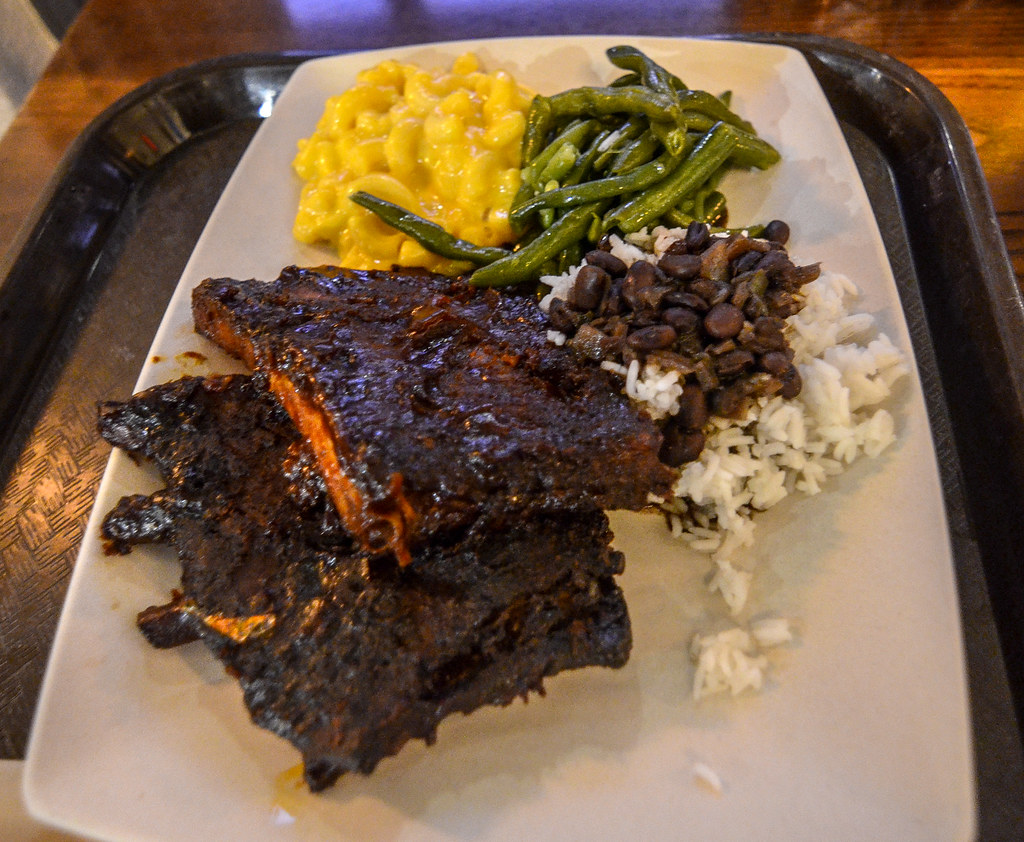 Moving on to the more interesting options, Melissa ordered the Barbecue Ribs which came with three(!) sides. Frankly, this is too much food. Drop a side and lower the price by $2 and it become more appealing. The ribs themselves were solid but not spectacular. They were juicy and had good flavor but the barbecue sauce wasn’t my favorite. I prefer Flame Tree Barbecue’s or Polite Pig’s ribs over these. The sides were all decent but not extremely memorable. I liked the Mac and Cheese pretty well and the Green Beans tasted fresh. The Black Beans and Rice were somewhat disappointing, order the Red Beans and Rice instead. This is an expensive counter-service entree coming in at $18.99. Having said that, there’s so much food here that you could easily share it and get some value. It’s not the best entree we’ve had but far from the worst. 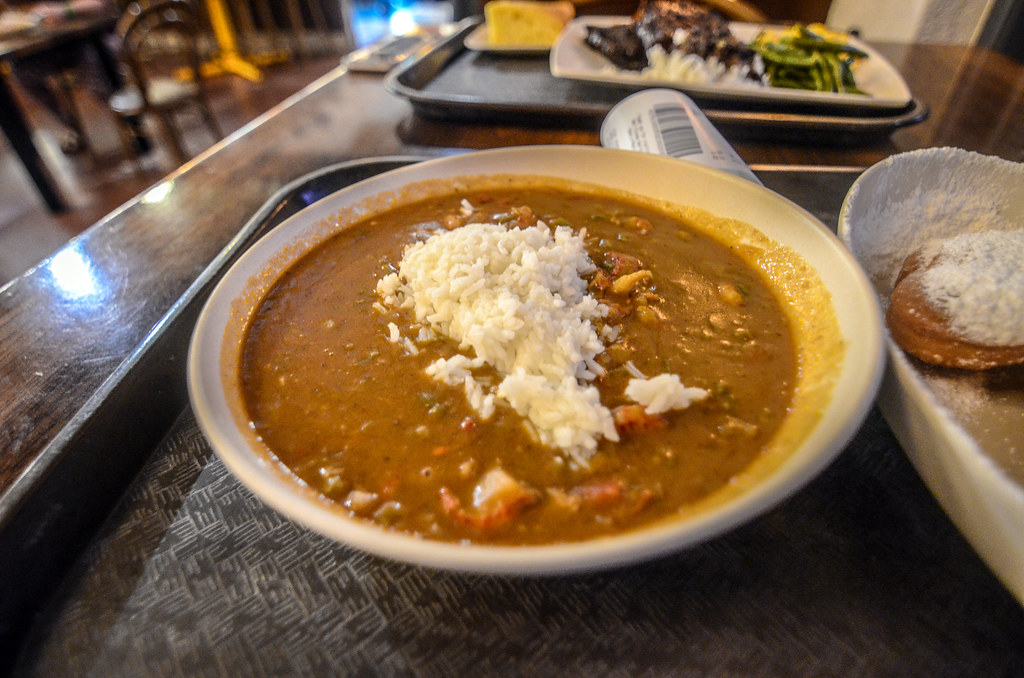 I went with the Crawfish Etouffee for my entree. Quick disclaimer: I love Cajun food and enjoy almost all of it. That included this. Etouffee is a rich, stew with some spice. The taste here was somewhat similar to a hearty curry. I was surprised at how much crawfish was in the dish and the quality of it. No, this wasn’t the best Crawfish Etouffee I’ve ever had but it was good overall and one of the more ambitious items on the menu. At $14.99, this is a decent value that I’d recommend if you like spice. 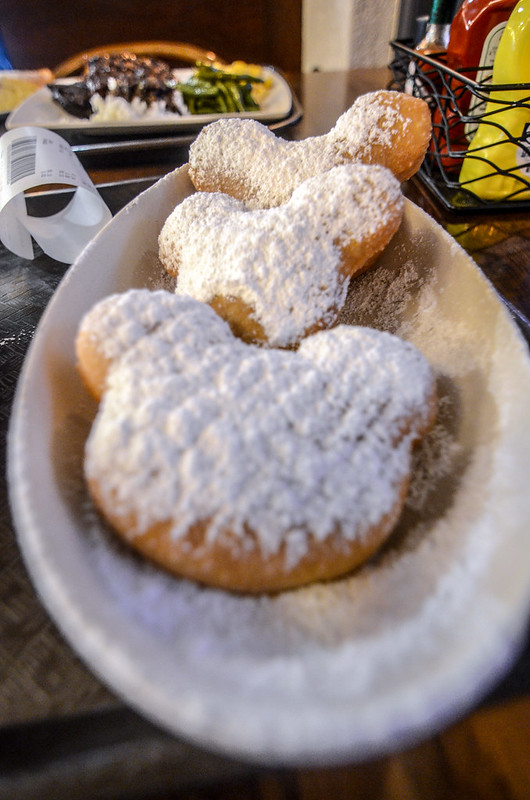 With mixed entree results, we moved on to the dessert. There was no question in what to order as these giant Mickey Beignets were a must-get. For the most part, we enjoyed them. Melissa liked them more than I did but we both enjoyed that they were freshly prepared. These weren’t as light as Disneyland’s New Orleans Square Beignets but they were still delicious since they’re dough covered in powder sugar. They do offer a Beignet Sundae which looked appealing but we were full. These are available at all times of the day and come in either 3-piece ($4.49) and 6-piece ($6.79). This isn’t a bad price and one of the more interesting counter-service desserts.

Overall, Sassagoula Floatworks & Food Factory’s food was hit and miss but there is a wide range of options both in terms of cuisine and value. For those on the Disney Dining Plan, Sassagoula Floatworks offers one of the best counter-service values around. There’s also plenty of interesting options under $12 for those looking for value out-of-pocket. If you are staying at Port Orleans French Quarter or Riverside then you can certainly do worse than eating here. For those not staying here, I wouldn’t make a special trip unless you are making an evening out of walking around the resort. Sassagoula Floatworks & Food Factory is a decent option but nothing more.