Woody’s Lunch Box is a counter-service restaurant in the recently opened Toy Story Land in Disney’s Hollywood Studios.  The limited menu largely features sandwiches and tater tots (or Potato Barrels as they’re known here).  Woody’s Lunch Box is open for breakfast as well as lunch and dinner, which this review will cover.  The restaurant does accept the Disney Dining Plan, as a counter-service credit, although the value isn’t great if using the plan.  Our review will feature photos of the food and restaurant, as well as our thoughts on the food, ambiance and value offered.

Woody’s Lunch Box is easily the best counter-service option at Disney’s Hollywood Studios.  That is more of a knock on the rest of the park than it is praise for Woody’s.  Honestly, for the last few years we’d rather walk or boat over to the Boardwalk and Epcot before thinking about eating there.  Woody’s Lunch Box changes that to a degree, although it’s not without some problems.

Frankly, we had a bad experience at Woody’s Lunch Box.  After placing a mobile order, something that we ordinarily recommend, we waited 45 minutes for our food.  This put us on a bit of a time crunch and we had to run out of the park while eating.  I’m not sure what the hold up was, although we did see many people waiting, just not as long as we did.  I talked to numerous people while waiting for 2 meals and they weren’t sure what was going on either.  That unfortunate experience seems like an outlier to me though so I won’t really be factoring that into our review, outside of this paragraph.  If it continues to happen in our subsequent trips then I’ll adjust my thoughts on Woody’s Lunch Box. 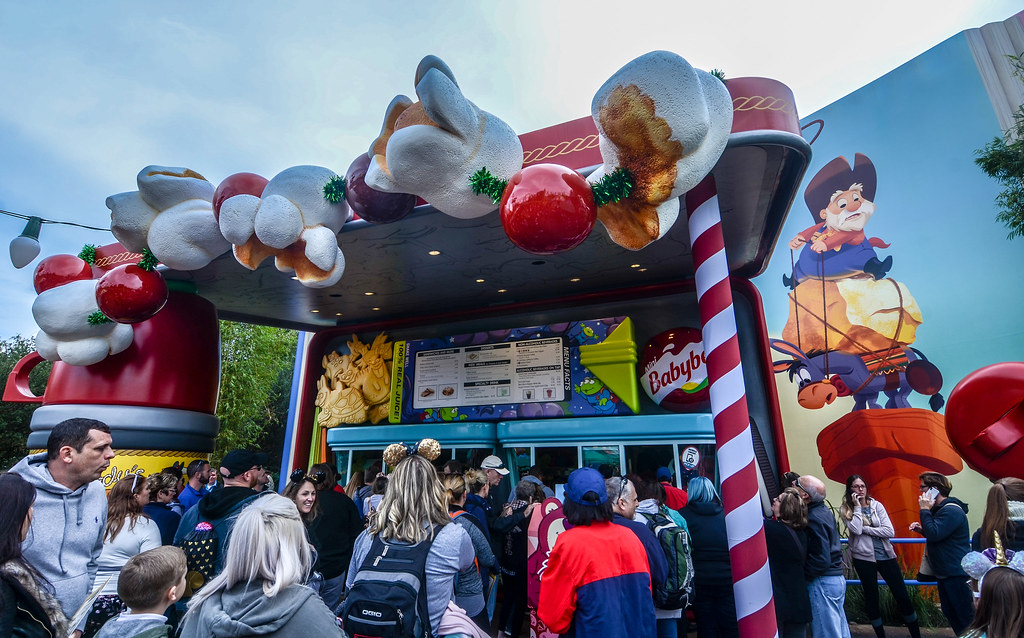 Like much of Hollywood Studios counter-service options, Woody’s Lunch Box consists of a counter to order at and outdoor seating.  There isn’t much of an atmosphere to speak of.  If like the looks of Toy Story Land then you’ll probably enjoy the seating area, otherwise it’s probably a non-factor.  Unfortunately, that seating area is the biggest problem with Woody’s Lunch Box.  With the popularity of Toy Story Land, there should be a pretty large area for seating.  That wasn’t the case though, as the seating area is not nearly big enough to seat everyone.  This is especially true if you are going during prime lunch and dinner hours.  While we were there I witnessed plenty of eating off of garbage cans (there’s no shame in that, I’ve done it many times) and multiple groups standing around waiting for tables to clear.  The design of this was not very smart, as it really diminishes the dining experience.  I understand that there may not have been room for an indoor area, although that would have been nice in a land that doesn’t have any A/C, but more room should have been budgeted for a larger seating area.

What decor Woody’s Lunch Box has is fine.  It all matches Toy Story Land, which isn’t the highest praise.  The counter where you order is in the shape of (you guessed it!) an upside-down lunch box.  We were there during Christmas so there were a few decorations on the restaurant.

Fortunately, the seating area and decor is vindicated due to the food.  Woody’s Lunch Box has a small menu made up of sandwiches.  The food is definitely American and leans toward comfort food.  We skipped the Smoked Turkey Sandwich but I did get a look at a few sandwiches that passed by.  The turkey did look juicy and tasty.  Considering the brisket I had on my sandwich, I would think the turkey would be tasty. 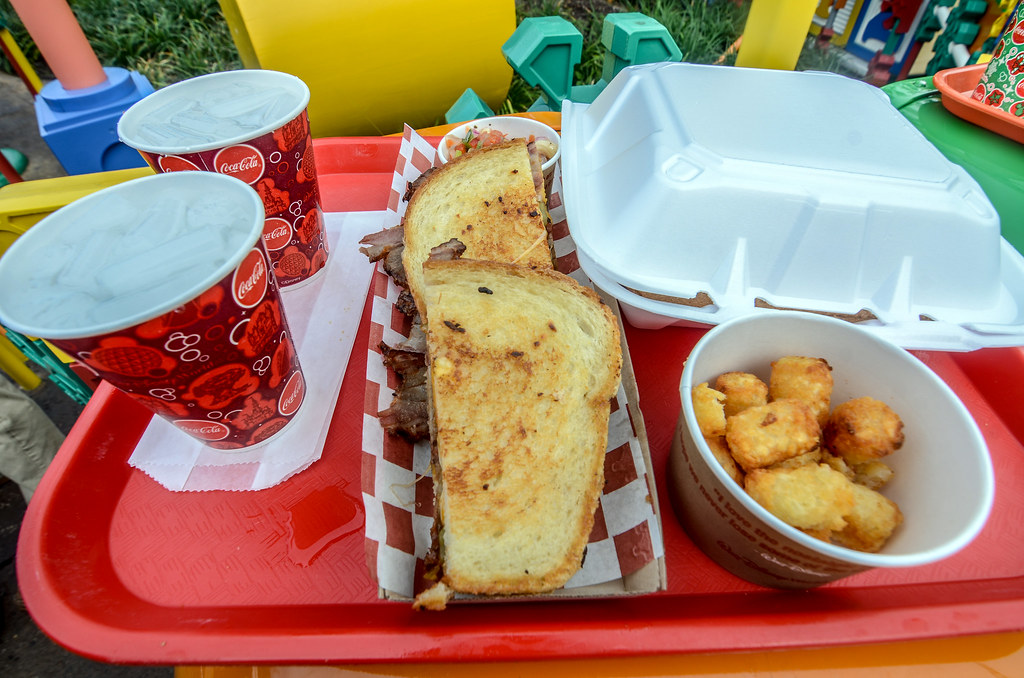 As I mentioned, I ordered the BBQ Brisket Melt.  This had brisket, pickles, BBQ sauce, and melted cheese inside of sourdough bread.  I was really impressed with this sandwich.  The brisket was juicy and not fatty at all.  I enjoyed the BBQ sauce on it too, as it had a slight kick to go along with the sweet flavor.  There wasn’t an excess of cheese and I didn’t find the sandwich very greasy. 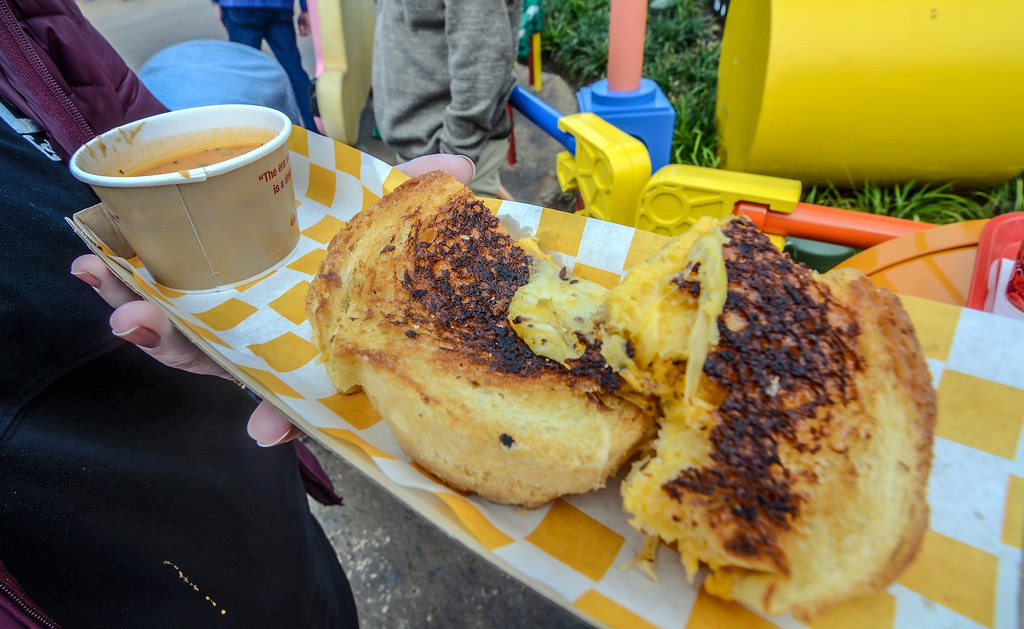 Melissa ordered the Grilled Three-Cheese Sandwich.  This has provolone and cheddar along with a cheddar cream cheese spread in the sourdough bread.  It also comes with a Tomato-Basil Soup.  Melissa loved the sandwich, saying it was one of her favorite counter-service items she’s tried in Disney World.  I didn’t like it quite that much but I thought it was delicious.  As with the brisket, this sandwich wasn’t overly greasy.  It was quite rich though.  The tomato soup was very thick but a nice accompaniment to the sandwich.  I probably wouldn’t get the soup on its own but I liked it with the soup. 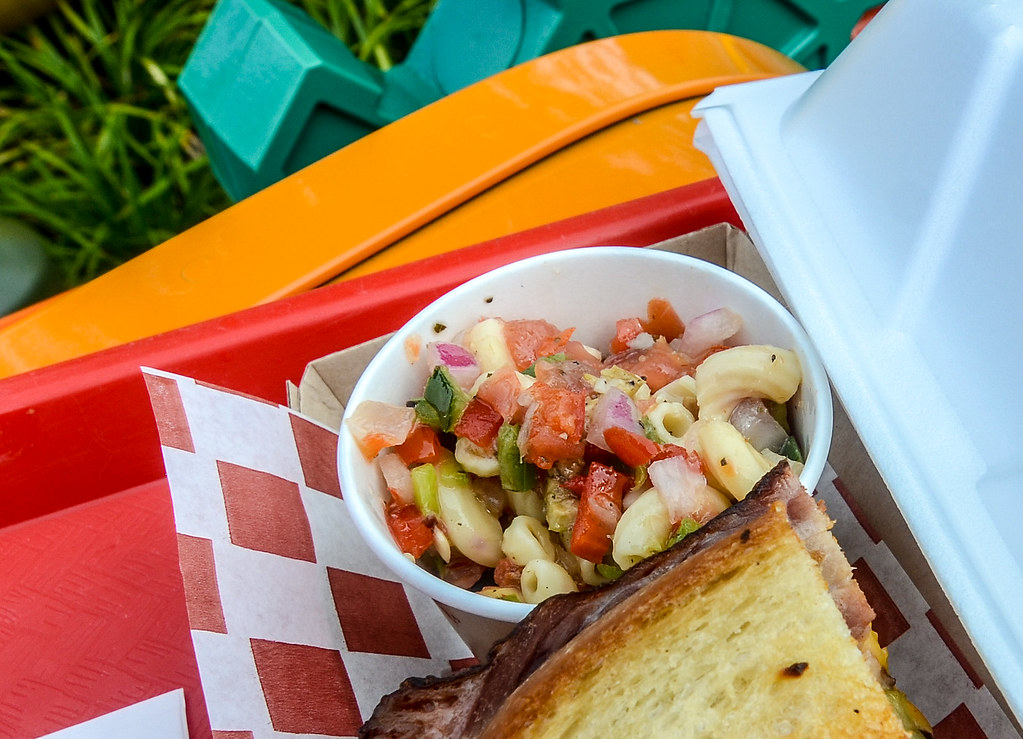 Like the soup, both the pasta salad and Potato Barrels (tater tots) were fine.  The pasta salad had a few too many onions in it and was a little heavy-handed on the dressing.  Those are minor complaints and it was a nice option for those that don’t want tater tots.  The Potato Barrels tasted almost exactly like all other tater tots I’ve tried.  “The Totchos” which are tater tots with plenty of toppings did look good but we didn’t try them.

For dessert, we shared the Raspberry Lunch Box Tart.  These desserts are basically pop tarts but they do taste better than that.  The raspberry flavor inside was sweet and slightly tart while the pastry on the outside was soft and flaky.  This was a very fun and good option for dessert.  They added a little Christmas pizzazz to ours! 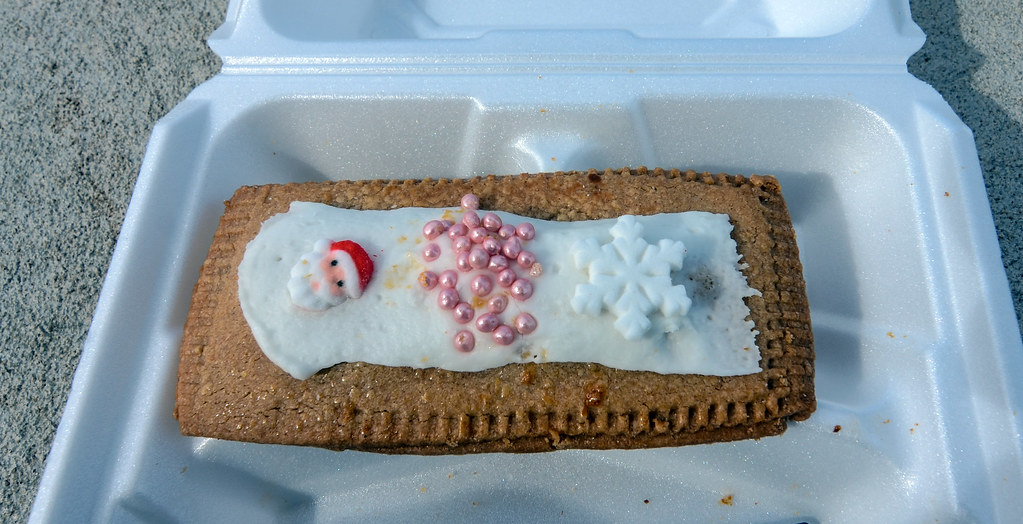 As far as value goes, Woody’s Lunch Box offers a strong choice for those paying out-of-pocket.  The Brisket Sandwich is $13, a price that feels well in-line with other Disney World entrees but this one tastes better.  The other sandwiches are both under $10 which is a very good deal.  The tarts are $3.29, which I’d happily pay again as they are large desserts that are very shareable.  All in all, Woody’s Lunch Box is one of the better counter-service values in Disney World.

Overall, I think Woody’s Lunch Box is a great option added to Hollywood Studios.  While there are some headaches involved, namely the seating area, it is worth it considering the quality of food and value.  The menu may be a drawback to some but if you enjoy sandwiches then I think you will really enjoy what is offered here. 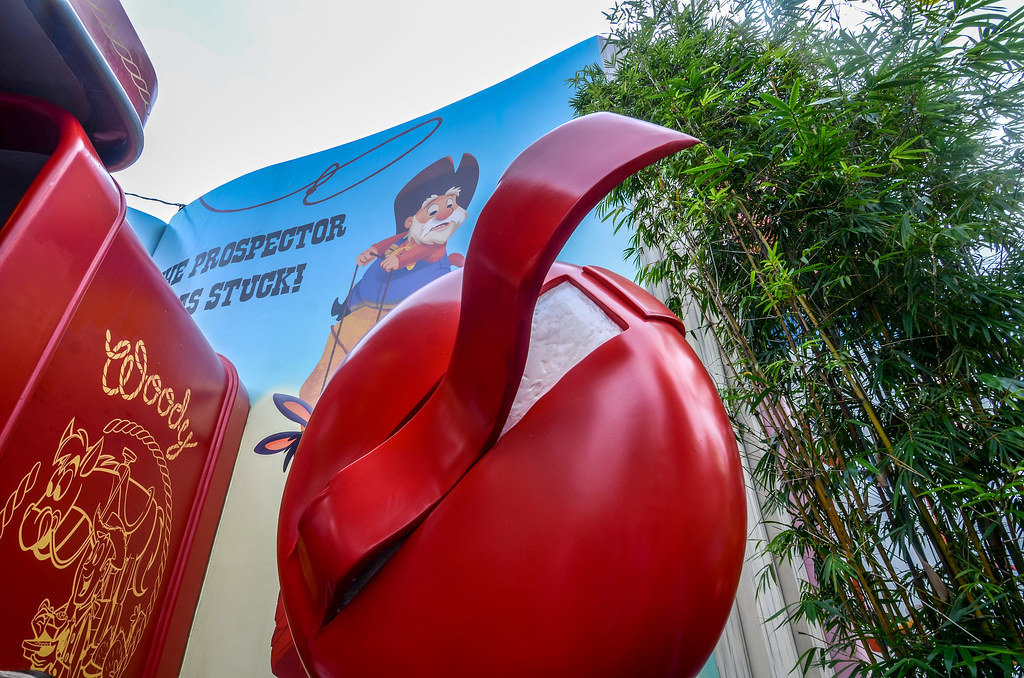 Have you tried Woody’s Lunch Box?  Let us know your thoughts and questions on the restaurant in the comments.  Planning a trip to Walt Disney World?  Check out our Disney World Trip Planning Guide to help you out.  If you enjoy what you are reading here on Wandering in Disney please share this post with your friends, as well as like our social media pages.  You can also subscribe to the blog via WordPress or email.  All of those links are on the right side of this page.  Thank you for reading, we really appreciate it!