Horizon Bay Restaurant is counter-service location in Tokyo DisneySea’s Port Discovery that serves American and Japanese food.  The restaurant is both a buffeteria and a character dining location but we will only be reviewing the buffeteria side as we didn’t experience the character dining.  This review will cover our thoughts on the restaurant’s food and ambiance as well as showcase a few photos of the food.

Port Discovery is a vibrant land that is among Tokyo DisneySea’s smallest.  Even with that smaller footprint, the location packs a punch with two attractions, a few transportation stations, and a restaurant.  The main part of Port Discovery is across the walkway from Horizon Bay, making the restaurant a bit of an afterthought.  Aquatopia and Nemo & Sea Rider are both intriguing attractions with a beautiful show building (Sea Rider) and great kinetic energy (Aquatopia).  The looming building across the walkway doesn’t seem as inspired, even if the exterior is beautiful.

Maybe this is what leads to my actual opinion of Horizon Bay, a good counter-service restaurant that is pretty forgettable.  Port Discovery itself sits in the shadow of some other amazing DisneySea lands, namely American Waterfront and Mysterious Island.  While the land succeeds and is mostly beautiful, it just can’t keep up with those powerhouses.  Enter in a fairly nondescript restaurant and you have a forgettable restaurant regardless of how good the food is. 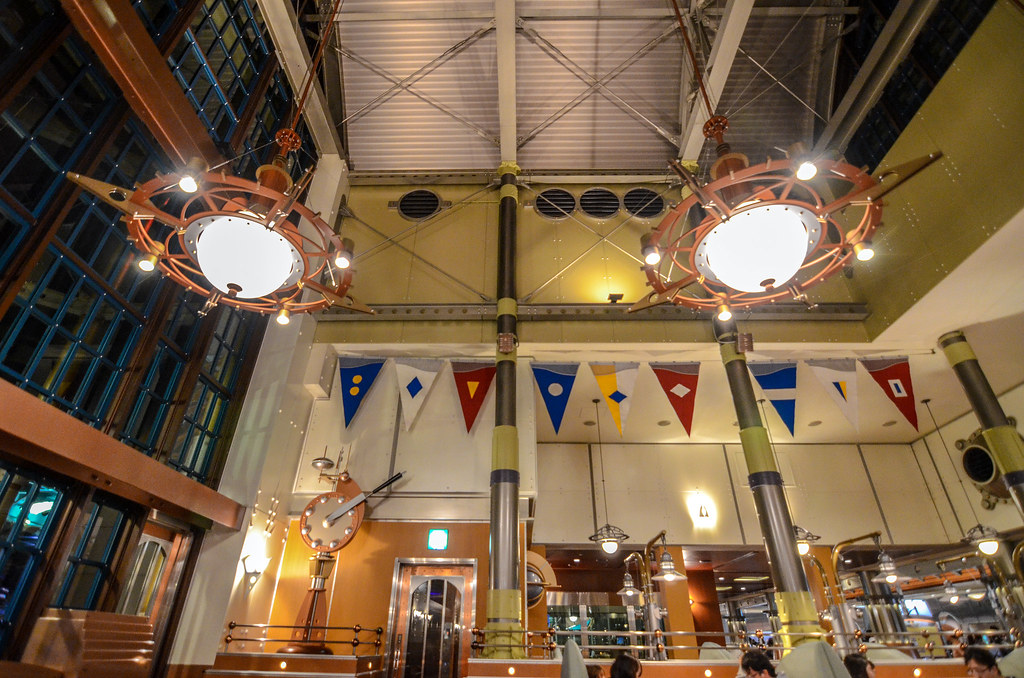 Horizon Bay has incredibly high ceilings with large windows that face the rest of the land.  There is some decor and theming but it is minimal, as you can tell in the above photo.  I like the chandeliers and color scheme but this feels more like a theme park restaurant than anything else in DisneySea.  That’s not really a knock on the restaurant more than it is a compliment to the theme park.  I do think eating here would be pretty in the daylight, timing it right to be able to look out across the land as the sun sets. 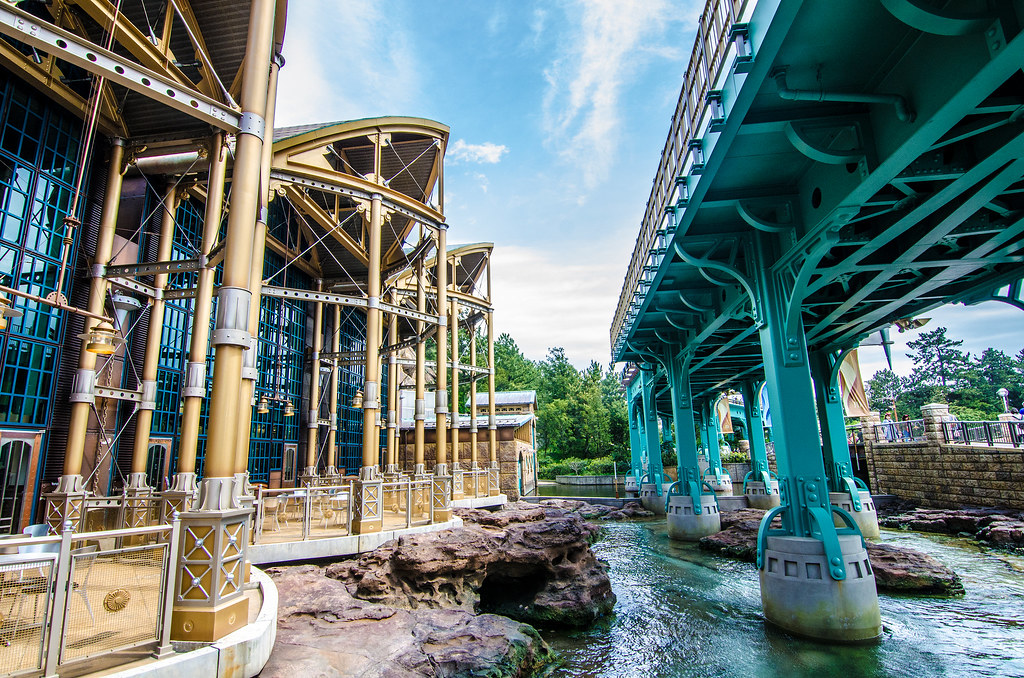 The outside of the building is far more impressive with beautiful, clear water and rock work right outside the seating area.  The gold pillars and large structure fit in with the land far more than the inside of the restaurant.  The mix of the teal and gold feel both futuristic and like a grand structure from a bygone era.  With all of this in mind, we absolutely recommend sitting outside if the weather cooperates.  Watching the Electrical Railway pass by is another perk.

As for the food, Horizon Bay serves dishes that Americans will be more than comfortable with.  It’s not an extremely diverse menu, offering meat and seafood largely, but there seems to be something here for the whole family.  If you want a look at the menu, click here and use Google Translate. 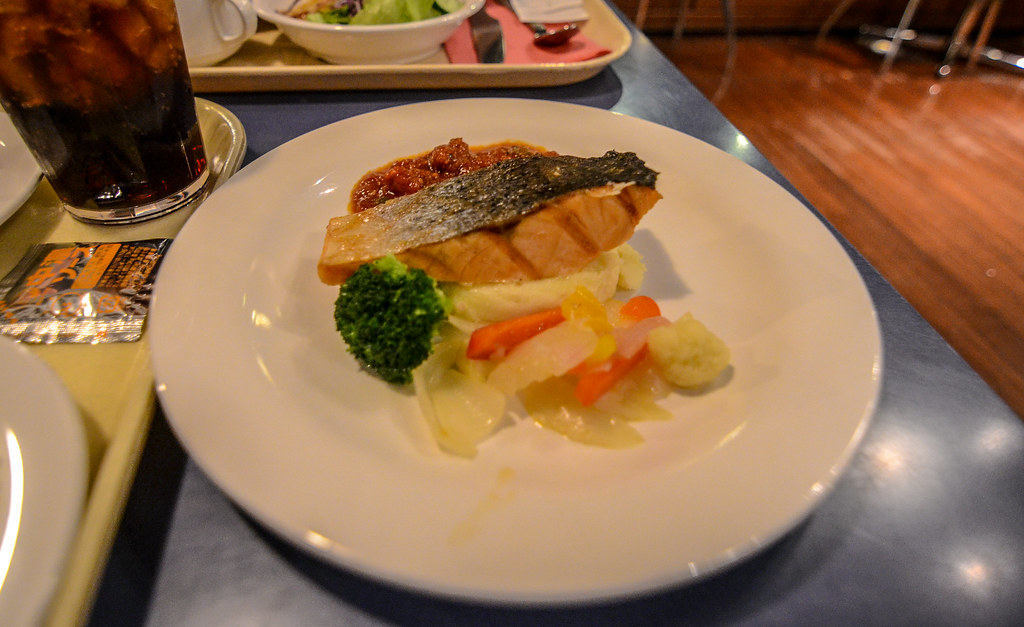 As usual, Melissa and I opted to share a set meal here that consisted of an entrée, drink, and dessert.  This set meal was called “Select Five”.  Basically, we selected an appetizer (soup), an entrée, a side, a dessert and a drink. For our main course we chose the Grilled Salmon with Tomato Sauce.  The salmon sat upon mashed potatoes and the tomato sauce had some other seafood mixed in.  This is one of the better counter-service meals I’ve ever had.  If you were just getting this entrée the cost would be right around $10 and that’s a steal.  The salmon had incredible flavor and the tomato sauce was a nice addition.  The salmon was a good size while everything else on the plate came in fairly small portions.  Still, I’ve had $20+ that didn’t taste nearly as good as this.  In keeping with typical Tokyo Disney Resort fashion, the seafood is generally the way to go.

We did like the soup and believe it was a Vegetable Soup with Mickey’s inside of it.  The broth was flavorful and was a good way to warm up on a somewhat cool night.  I wouldn’t go out of my way to have the soup but it was a nice option.  The rice was good albeit exactly like most rice I’ve had.

Our friends tried a beef option and didn’t enjoy it nearly as much as we enjoyed the salmon.  I’m not all that surprised as beef is usually served fairly thin from what we saw.  They didn’t think it was bad, but it did lack flavor.  Another tried the Pork Cutlet, another generally good and safe option in Japan, and enjoyed it. 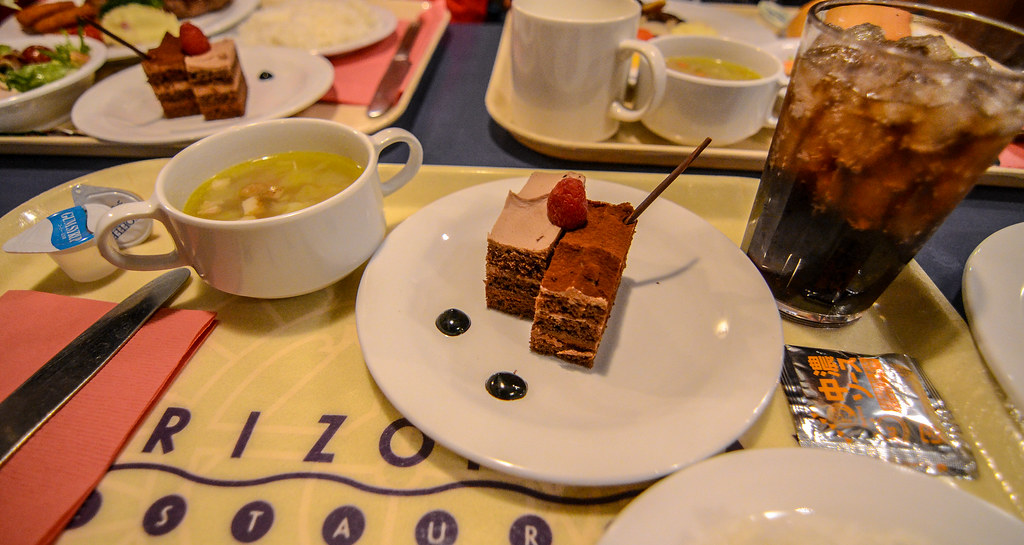 For dessert we ordered the chocolate cake .  The cake was moist and rich, full of flavor.  I’m not a huge fan of cake but this was a solid dessert.  I would choose others in Tokyo DisneySea before this though.

If you are simply looking for a good, cheaper meal at Tokyo DisneySea then Horizon Bay is one of the best bets.  The food is a great value and made well.  Where Horizon Bay does fall short is in the ambiance.  Instead of fantastic details or an amazing setting, the restaurant feels exactly like that – a restaurant.  There isn’t anything wrong with that and if the food looks appealing then I’d still recommend this place.  But, there are more interesting restaurants, counter-service and table-service, at Tokyo Disney Resort.

Do you have questions about Horizon Bay Restaurant or Tokyo Disney Resort?  Let us know in the comments below!  If you enjoy what you are reading here on Wandering in Disney please share this post with your friends, as well as like our social media pages.  You can also subscribe to the blog via WordPress or email.  You can do all of that on the right side of this page.  Thank you for reading, we really appreciate it!