The park that received the most attention at the parks & resorts segment of D23 was Epcot.  Here’s a list of all that was announced specifically for that park.

All of these attractions will open over the course of the next few years (all before 2021).  I’ll be back with commentary on these changes in the next few days.  Here’s a link to a few Disney Parks blogs posts with a little more information.

Ratatouille/Guardians of the Galaxy
Mission: Space and restaurant

My thoughts on the announcements:

There’s quite a few announcements here and as a whole I think this is a mixed bag.  Let’s take a look at each individual announcement.

Unfortunately, I just don’t see how it fits in Future World.  The executives justified it by saying Peter Quill visited Epcot as a child.  My wife was reading me updates on the announcements as I drove.  She told me this and I thought it was just a snarky tweet from one of the other bloggers I follow.  Turns out this was really said.

Allow me to get on my blogger soapbox for a second (it’s poorly built so it crumbles if I stay on it too long).  This joke of a reason is infuriating to me.  I know many people don’t care about this, and that’s fine, but fitting in an attraction to a theme park because a fictional character was said to visit Epcot as a kid is insulting to fans who care about thematic integrity.  Imagine your favorite sport team adding a bad player because he liked the team as a kid.  There are plenty of faults in that analogy but why not just announce the attraction and move on.  Why feed fans a terrible reason that anyone can see right through.  Soapbox dismounted.

Last paragraph notwithstanding, I’ll hold any judgments on this Guardians of the Galaxy attraction until we know more and can actually ride it.  I’m skeptical but realize that Future World needs a shot in the arm.  I’m hopeful that the Energy Pavilion is just done away with and that this is turned into a large space pavilion with Mission: Space and the new restaurant (which I’ll write about below).  Time will tell on this one but this was one of my least favorite announcements of the Expo.

Moving on to Ratatouille, I’m more optimistic on this announcement.  While I’m hopeful that ride isn’t just a clone of the Disney Paris attraction (as that one doesn’t get the best reviews) I do think Ratatouille fits the area fairly well.  As you can tell from the paragraphs above, I don’t like attractions that don’t fit in thematically with an area.  Shoehorning animated films into World Showcase Pavilions is one way to do that but, thankfully, Ratatouille celebrates France.  I’m cautiously optimistic about this announcement as adding several attractions to World Showcase should be a priority.

In that same vein, an updated China film is good by me.  While Reflections of China is perfectly adequate, I do think these films should be updated fairly often as cultures, and even landscapes, change across countries.  This seems like a net gain to me. 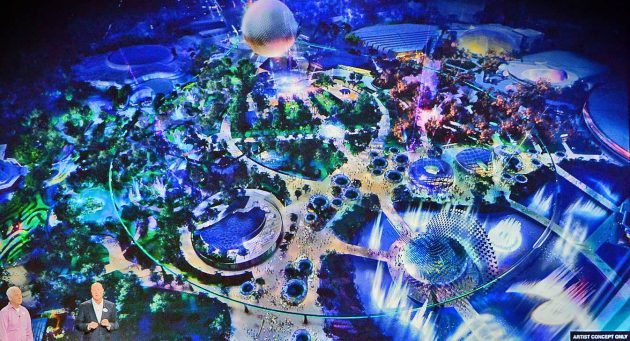 A Future World aesthetic change is a great idea and the concept art looks stunning (seen above).  Of course, if Future World’s attractions are terrible then the looks won’t matter much.  But if there’s one thing the Disney company has been good at over the last few years it is making areas beautiful and inviting.  New Fantasyland is a great example of an area with so-so attractions but a great look.  New Fantasyland is far from a failure.  All in all, I think the concept art looks really promising and makes me optimistic about there idea of what the park should look like.

Likewise, I’m optimistic about the new space restaurant and Mission: Space.  I’ll start with the latter.  My biggest complaint about Mission: Space has always been that once inside the attraction it looks bad.  With a mission involving floating around the earth, I think this update could lend itself to better visuals.  If nothing else it will make the attraction more family-friendly which Epcot desperately needs more of.

The space restaurant concept art looks awesome and is a nice idea to fill a stretch of land not already used.  This space area could be a nice little sub area for Future World and is very umm… Futuristic?  Astronaut food doesn’t sound appetizing, but I’m hopeful that the restaurant will be set in the future and will just try to serve really good meals instead of theming the food.

Even with these announcements I’m still confused about what Epcot’s identity is going to be.  On one hand, the space ideas and Future World’s refresh look promising and fit in with the original idea.  On the other hand, an attraction is being added because a fictional character went there as a child?  All in all, I think Epcot will become a more exciting park than what it has been in the last 15 years but will stray even further from the original Epcot Center identity.  I expect more Epcot announcements over the next few years as these announcements (along with other rumors) made it seem as if there is plenty more on the table for the future of this park.

What do you think of these Epcot announcements?  Let us know in the comments.  If you enjoy what you’re reading here on Wandering in Disney, please subscribe to the blog on the right side of this page.  That’s where you can find links to our social media accounts, as well.  Thank you for reading!