Our last trip report, in October, started with the prospect of flying into a hurricane.  This trip started in a more relaxing way with a day at the beach.  We flew out of Seattle late on a Monday night, landed in Orlando at about 6 AM and headed to Daytona Beach for a night.

While I won’t thoroughly get into our day there since this blog is focused on Disney Parks I will touch on some of the highlights.  Although highlight isn’t the right word for this, I did think it was interesting and fairly sad to see the aftermath of the aforementioned Hurricane Matthew.  When flying in the day after the hurricane hit in October, we didn’t see much devastation at Walt Disney World.  Daytona Beach was hit much harder than Orlando, being on the coast.  The hotels were under repair, the amusement park rides weren’t open and other stores around town were closed.  In a way, seeing Daytona Beach was sobering.  A city trying to build itself back up after devastation. 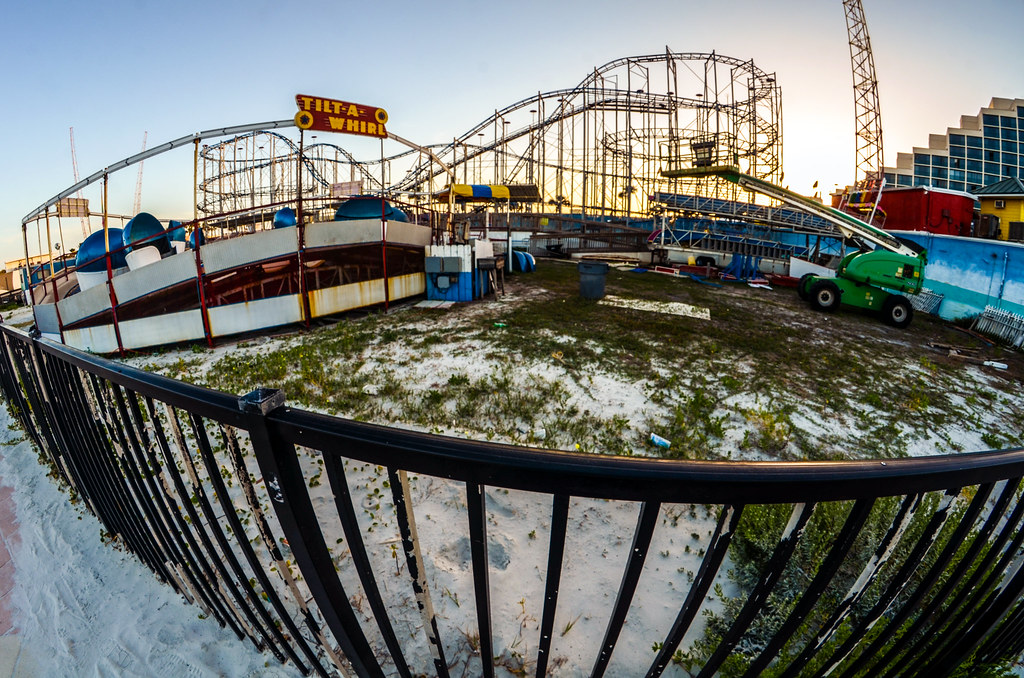 One of the best ways to accomplish this is by taking advantage of natural beauty.  Thankfully, there aren’t many sights better than the ocean.  After arriving at Daytona Beach in the morning and taking a nap, the ocean was exactly where we headed.  We laid on the beach for a while, got in the ocean and then laid back on the beach.  It was an incredibly relaxing way to begin a Disney vacation.  The Washington state beaches usually have oceans that are about 60 degrees.  Getting in the warm Atlantic was a nice change. 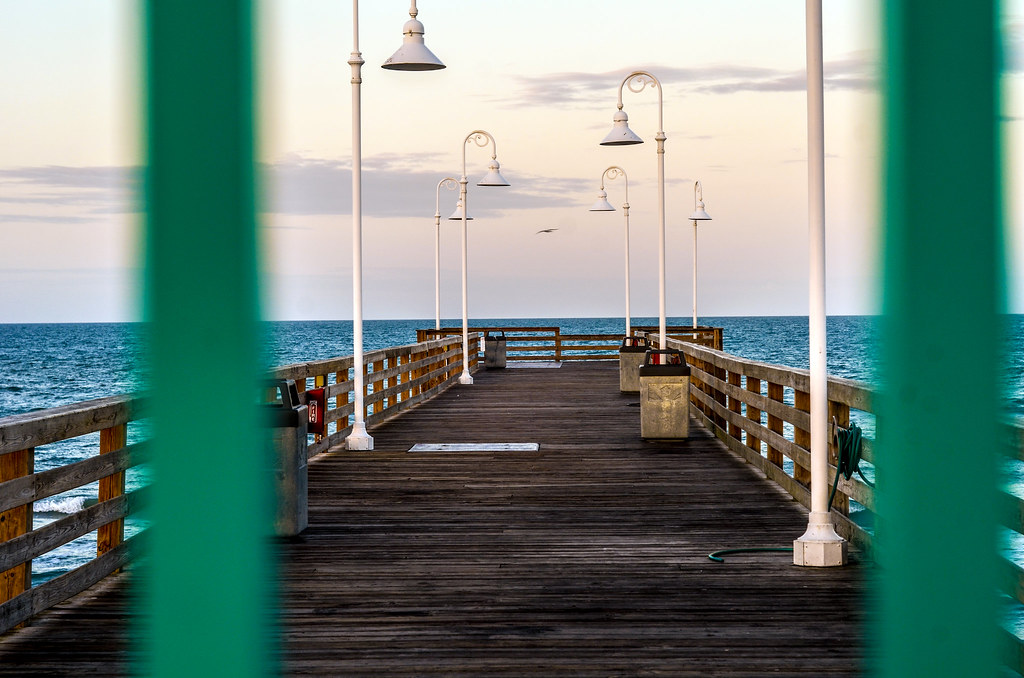 As far as the rest of the town, the pier was nice enough.  I didn’t try any of the food there but I liked the views.  There was a little shopping center down the way from our hotel, which was a Hilton.  I did like the amphitheater that was right along the ocean.  It would be fun to see a show or concert there and it seemed like those happened fairly often, at least during summertime. 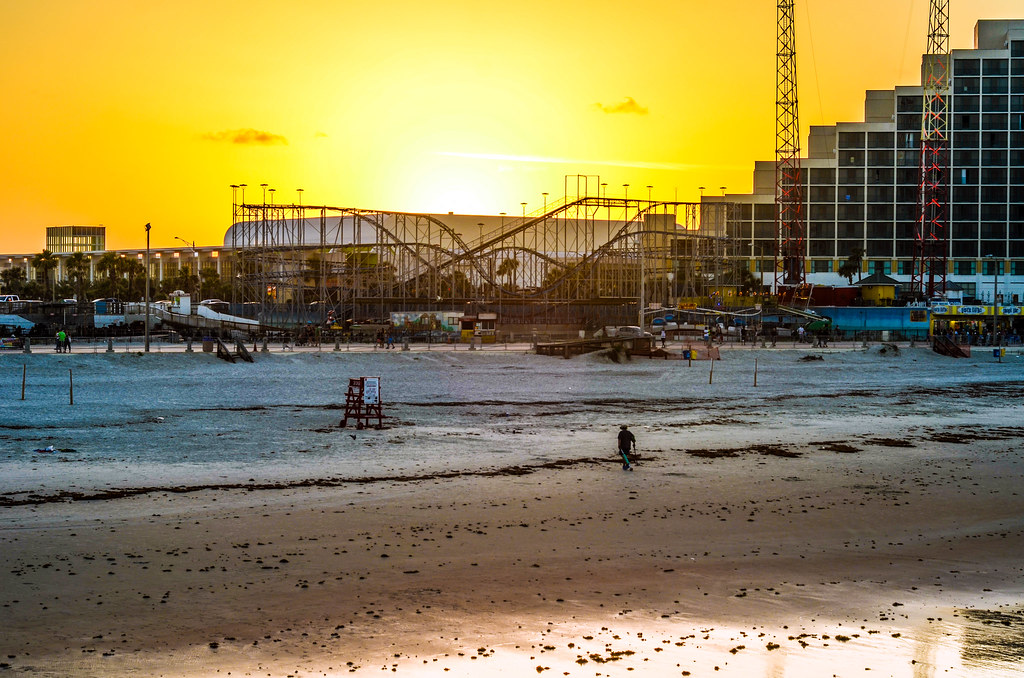 Outside of the highlights I mentioned, I didn’t find Daytona Beach to be anything too exciting.  Nascar doesn’t interest me much but I’m sure that the Daytona Speedway would be a fun tour for those who it does interest.  Compared to Southern California beach towns, Daytona simply doesn’t measure up.  The town is a bit too touristy for its own good.  With that said, it’s not a bad way to spend a beach day away from Orlando.  The drive takes roughly an hour.

After our day at Daytona Beach, I woke up with a cold.  I then proceeded to take cold medicine on a fairly empty stomach.  The results were predictable but I felt better after a couple of hours.  Shortly after that we rolled up to Caribbean Beach and checked in for our night stay there.  We had quite a bit of luck with our early check-ins this trip, as we already had a room ready at about noon.  The previous day we were grateful that our room was ready at the Hilton when we checked in at about 9 AM.  After taking our bags to the room, we ate lunch at the Old Port Royale Food Court in the hotel and were right back in the car. 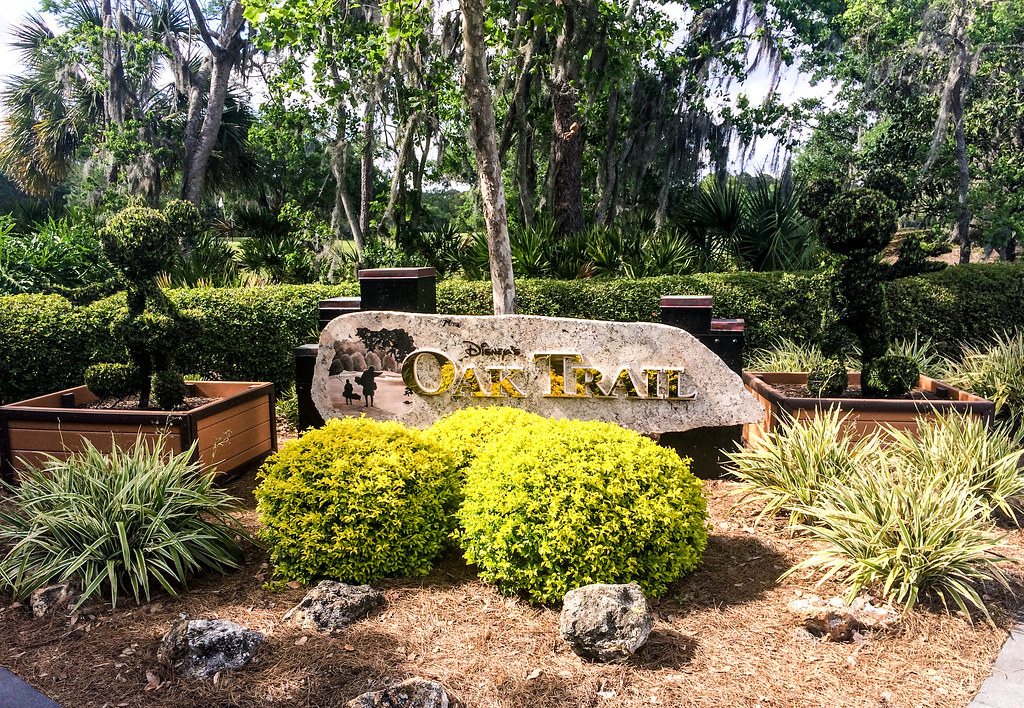 I’m willing to bet that golf courses at Disney are one of the most underutilized aspects of the resort.  If you have an Annual Pass or get the Water Park and More addition to a park ticket, 9 holes of golf are included.  We decided to try something new on this trip and play a quick round at Disney’s Oak Trail Golf Course.  I plan on reviewing the experience but I was pleasantly surprised.  The scenery was fun, the holes were pretty interesting and we saw an alligator along the way.  My dad, Melissa and I went.  None of us are great golfers but we all enjoyed ourselves.  This may be an enticing addition to your trip for a guy who is reluctant to go to Disney World.

9 holes may have taken us an embarrassing amount of time so we were a little late to meet my mom over at Magic Kingdom.  She spent the afternoon at Epcot, enjoying the flowers.  Having my parents along with us for the trip was a nice treat.  They’ve joined us before on Disney trips but it’s never been just the four of us.  We were excited to have them along, especially since they cheered us on at our half marathon 😉 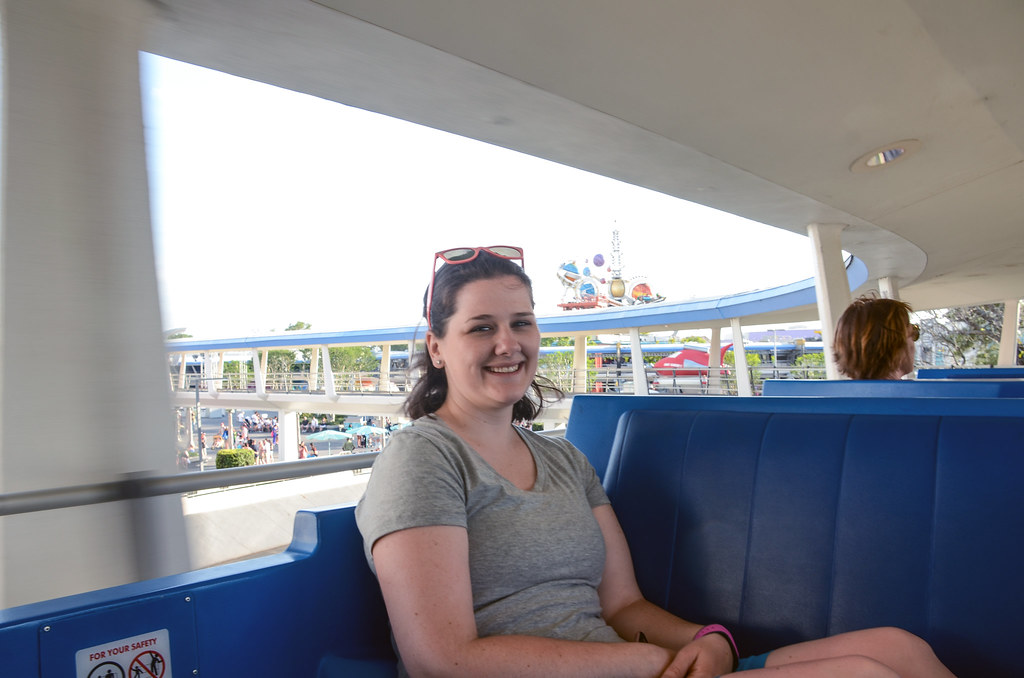 Once inside Magic Kingdom we went to Tomorrowland and used our Space Mountain FastPass.  Next up was the TTA PeopleMover, which we had an interesting experience on.  The ride was rolling along, as splendid as ever and we were coming up on the end of the attraction. We stopped a little before the exit for what I assumed was to help someone get aboard the ride.  Then… WHAM! A ride vehicle slammed into the back of ours and everyone suffered a severe case of whiplash.  Okay, it wasn’t that bad.  In fact, riding in a car with my dad as he goes over speed bumps is more painful.  There seemed to be a malfunction and the attraction announced that it would be starting again.  A few seconds later the same exact thing happened. 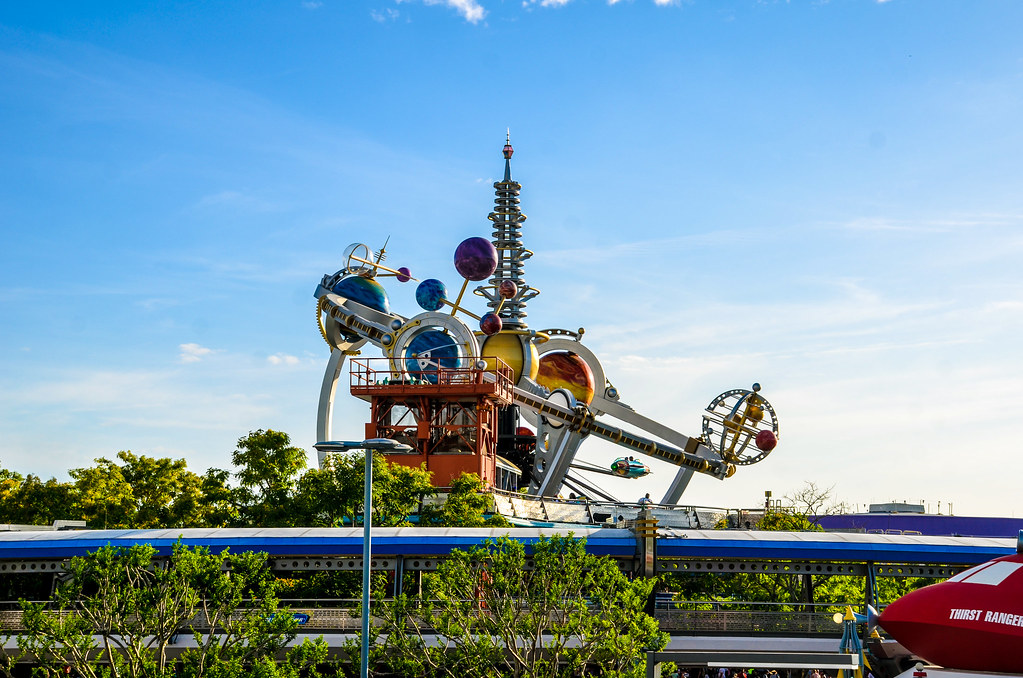 After a few moments, we were evacuated off of the PeopleMover.  I remarked to Melissa that some people enjoy getting evacuated off of thrill rides but it fit my personality to get evacuated off of the most relaxing attraction in Disney World.  Anyway, it only caused us about a 10 minute delay and we were given a FastPass for our trouble.  Not to mention, a fun memory!  A pretty good trade-off if you ask me. 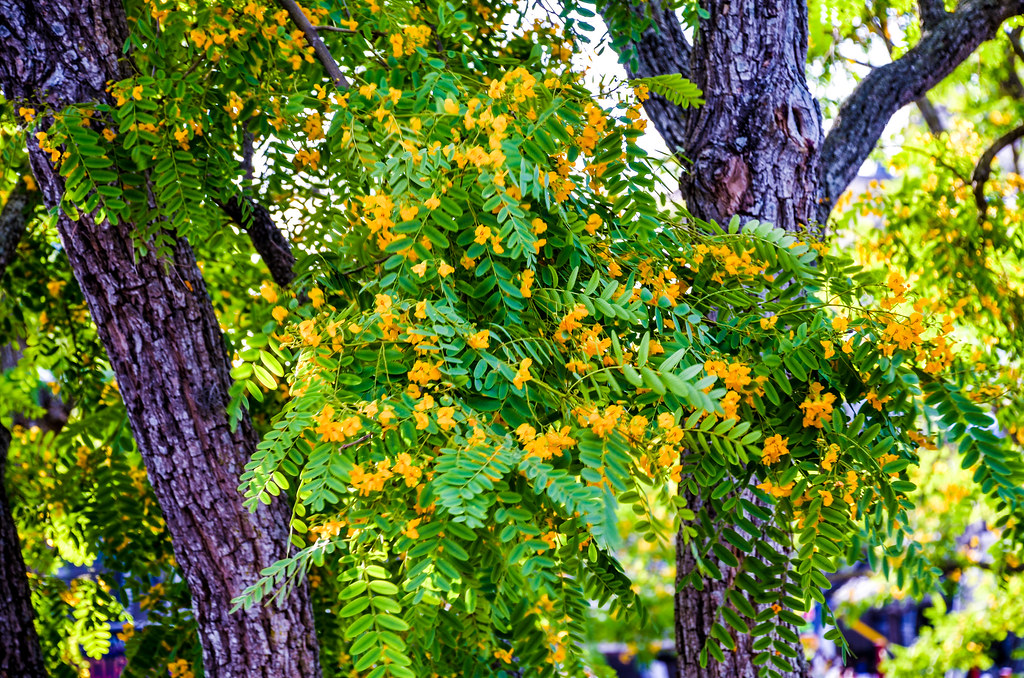 Next came Seven Dwarfs Mine Train.  The attraction has grown on me over the last few years.  No, the Mine Train isn’t a great thrill ride and isn’t better than the other Magic Kingdom mountains.  The attraction is great for what it is though – a solid D-ticket coaster that is somewhat innovative in having a dark ride scene in the middle of it. 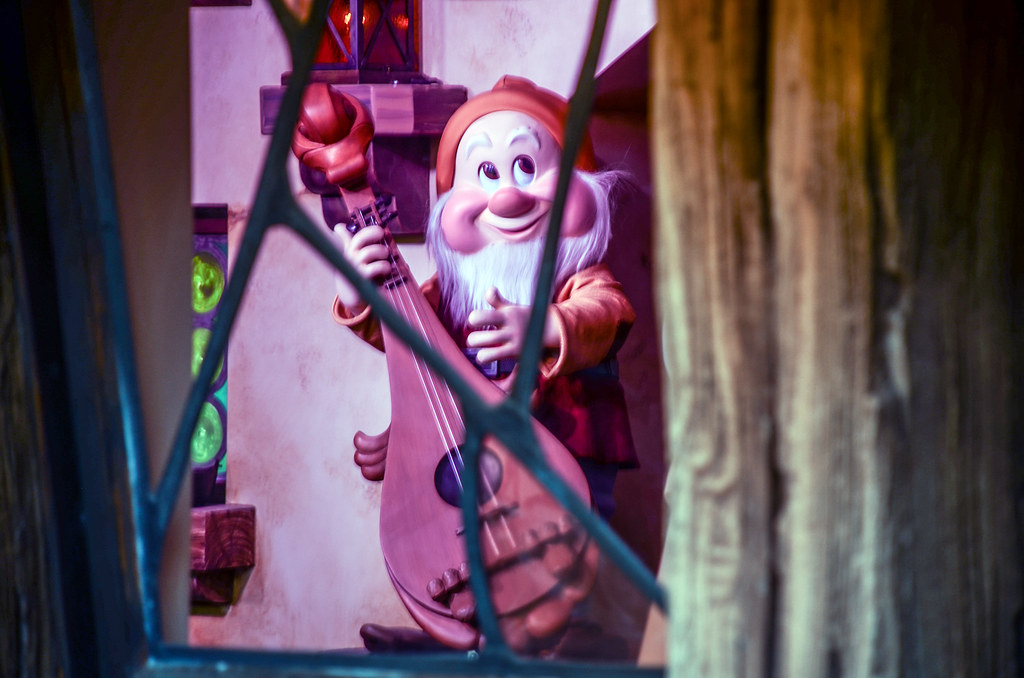 As someone who is slightly afraid of roller coasters, I like the pace that Seven Dwarfs Mine Train takes.  I’m also a sucker for the end scene with the cottage, although it comes all too fast. 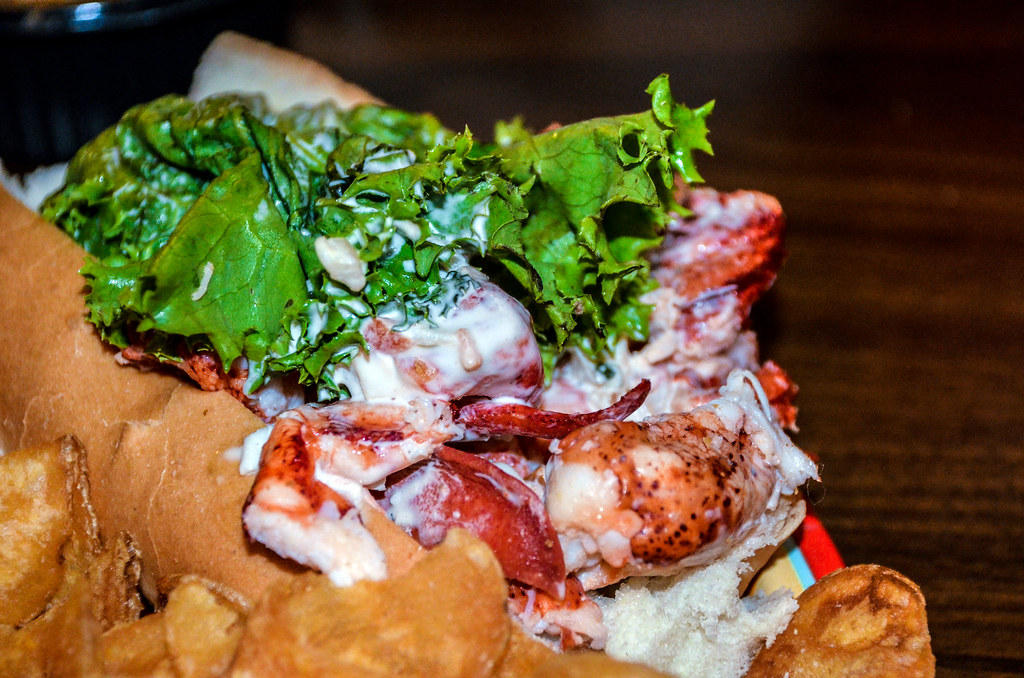 After our ride, we wandered for a little bit and then went to dinner at Columbia Harbor House.  Our meal was delicious, here’s my review from earlier this week.

You know that favorite restaurant in a town close by that you always have to go to when you’re there?  That’s what Country Bear Jamboree is to me when I’m in Frontierland.  So, after we went on the wildest ride in the wilderness it was in to hear the sultry tones of Big Al and the rest of the Country Bears.  We had a more enthusiastic crowd than usual which makes the experience more enjoyable. 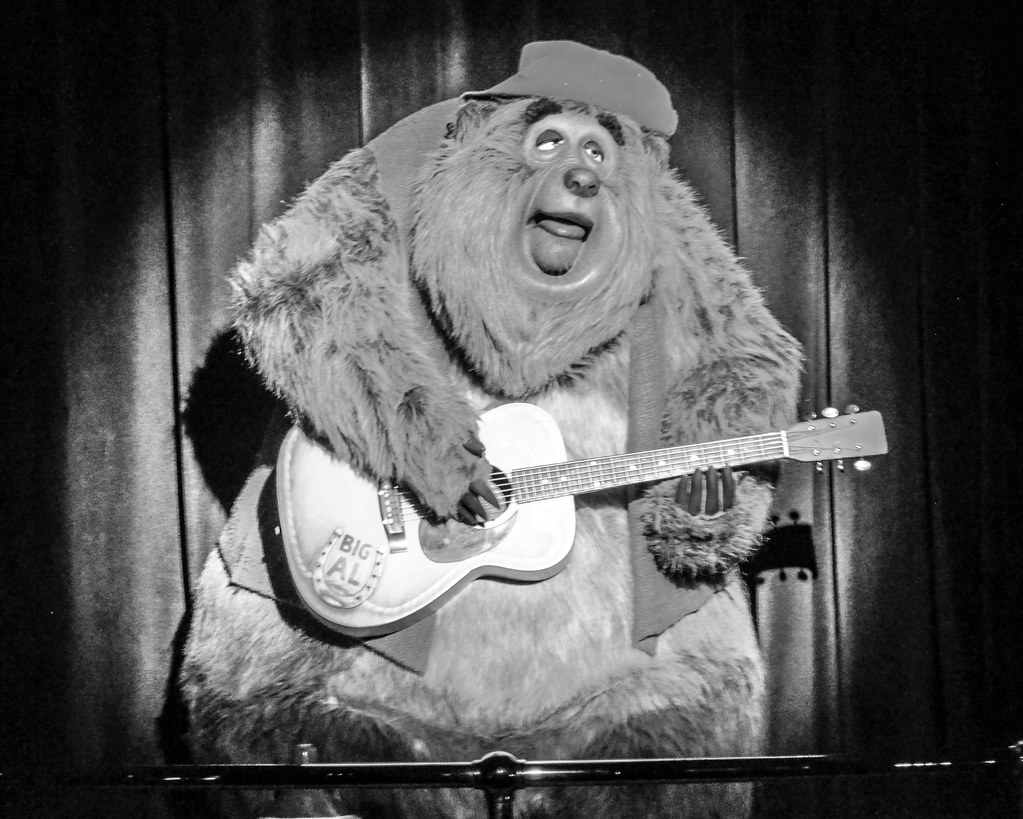 At this point the night was still young and Magic Kingdom was open until 2 AM.  It was about time to head to the Hub for Wishes, which is where we’ll pick up the next installment of this trip report.

Let me know what else you’d like to hear about from our trip, I’d be happy to share! If you enjoy what you’re reading please like our social media pages which you can find on the right side of this page.  Thank you for reading, we really appreciate it!