Every week our writers get together and answer a Disney Parks related question.  Here is this week’s question and answer!  Leave your answer in the comments!

Question of the Week: Which of the 6 night-time shows at U.S. Disney Parks (I’m not counting the Star Wars fireworks at DHS, as they are supposedly temporary) would you most like to see get replaced or revamped. You have to choose one, even if you love them all!

The choices would be Fantasmic! and Disneyland Forever at DL, World of Color at DCA, Wishes at Magic Kingdom, IllumiNations at Epcot, or Fantasmic! at DHS.

Melissa L. – I think my choice would be Fantasmic at Disney’s Hollywood Studios. It is great, but I personally enjoy the one in Disneyland better so I think this show could use an update. Andrew – This is a tough one for me as it comes down to two choices… Not to spoil an upcoming review, but I’m not a big fan of the new World of Color show. With that being said, I’d choose Fantasmic! at DHS, as well. I don’t think that show holds the same energy or charm as Disneyland’s Fantasmic! The space that the show is in is a great amphitheater and I’d love to see what Disney could come up with to fill that spot.

Leslie – I would also choose Fantasmic at Hollywood Studios because I was incredibly underwhelmed when I saw it for the first time. Compared to Disneylands it is sub par and I would really just like to see a different show entirely there. I don’t like there being a comparison and it feels like they can’t live up to Fantasmic in Disneyland.

Cassie – I would choose World of Color at DCA. I really enjoy World of Color, but it doesn’t impresses me as much as the other options I’ve seen here so that’s why I had to pick it.

Kelsee – I agree with the World of Color. It’s a really good show, however I feel it’s missing something that the other shows have. When I watch this show compared to the others, I don’t feel as entranced and absorbed in the show. I feel distracted which could have to do with the location of the show or the fact that it just doesn’t have that extra magic that the others have. 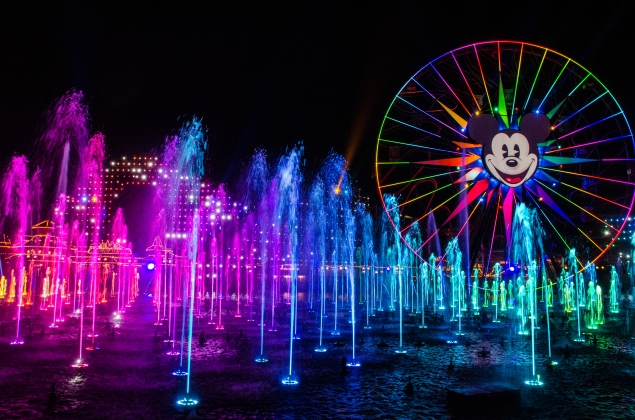 What night show would you choose to change?  Leave your answer in the comments.  If you like what you’re reading here at Wandering in Disney, please subscribe to the blog and like our Facebook page.  You can do both of those things on the right side of this page.  We really appreciate you spending a few minutes of your day reading our blog.  Have a great week!