This is our 100th post here on Wandering in Disney.  We wanted to thank everyone who has taken the time to read our blog, we really appreciate it.  After the post you will find some of our most popular posts linked below.  Again, thank you!

Those who know me, could tell you that my love of thrill rides is strained because I, hmm what’s a delicate way to say this, am a big wimp.  I’m that guy on the roller coaster who is gripping onto whatever he can, closing his eyes and softly whimpering (not always softly).  If I ride Tower of Terror with you be prepared for extra attention being paid to our ride photo as other guests stand and laugh at that guy sitting in the corner with his head tucked in his lap, looking like he is crying.  Now that going to theme parks has become a more regular occurrence for me, I’ve learned to appreciate these attractions and what they bring to the table.  Still, there are some that I will only do once a trip.

With that being said about faster paced rides, I consider myself a slow-ride expert.  I mean, what is a guy supposed to do when the rest of the group he is with goes on T0wer of Terror for the 4th time that day?  Go ride those somewhat-lame spinner rides in A Bugs’ Land, of course.  Oh, the rest of my family wants to go backwards down an attraction that is based on the tallest, deadliest mountain in the world again?!  No problem, I’ll just be at the Boneyard in Animal Kingdom.  Yeah, that’s the playground.  Yes, I was the only adult but that place is really cool.  Needless to say, I’ve had my share of turns around the slower attractions.  Today’s post is dedicated to those attractions that have saved me from possibly having to change my pants in the middle of a crowded theme park.  These are my top-10 slower attractions at Disney Parks.

Now, it’s a little hard to determine what makes a slow-ride.  What I’ll try to go for is attractions with a slow and steady pace and/or attractions that are themed for a younger age.  For example, Buzz Lightyear Space Astro Blasters (not to give anything away) would fit because it goes the same speed throughout but Toy Story Mania would not because it whips you around pretty good.  No, I’m not scared of Toy Story Mania but I wouldn’t necessarily call it a slow ride.  There are also some kid rides that terrify kids (and maybe me) or have adult themes that I won’t include like Mr. Toad’s and It’s Tough to be a Bug.  The other set of criteria I will rank these off of is that a good slow attraction needs to be somewhat relaxing.  Peter Pan’s Flight is great but it won’t rank as high on my list because it doesn’t have a slow pace to it.  The same could be said about Buzz Lightyear and a few others.  Both of those attractions will probably still appear in my rankings but they will be lower because they aren’t as relaxing as some.  In other words, a great slow attractions should allow you to catch your breath, sit back and be entertained.  One last note is I’m going to try to stay away from too many shows and films (sorry Hall of Presidents) or places to walk around (you know I adore you, Maharajah Jungle Trek) although some may still sneak in.  If you would like to debate on some of the choices I make, put it in the comments where I’ll be sure to respond with how wrong you are (joking)!  Without further ado, here’s my top-10 and a few honorable mentions.

Buzz Lightyear Astro Blasters – This is an easy-going attraction that is fun for all ages.  As you roam through outer space in search of Zurg, it’s nice and cool while going at a slower speed.  The caveat here is this is serious business.  Defending the galaxy is not a task to be taken lightly and I would expect that any Wandering in Disney readers would know that.  Therefore, there is no time to appreciate the air conditioning and slow ride, it’s time to shoot some crazy-looking aliens!  Kilimanjaro Safaris also fits this mold of a slow pace but there is too much going on to get your heart racing.

The American Adventure – I said that I would try to leave off shows and films but this is hard to pass up.  That’s why the American Adventure falls in the honorable mention.  Located in the American Pavilion (which is actually called The American Adventure, itself) in Epcot’s World Showcase, this attraction takes us through America’s history.  Ben Franklin and Mark Twain audio-animatronics narrate the show that lasts for nearly half an hour.  It’s a touching show that is relaxing and well done.  Country Bear Jamboree, Impressions de France and Muppet Vision 3D were right on the cusp, as well. 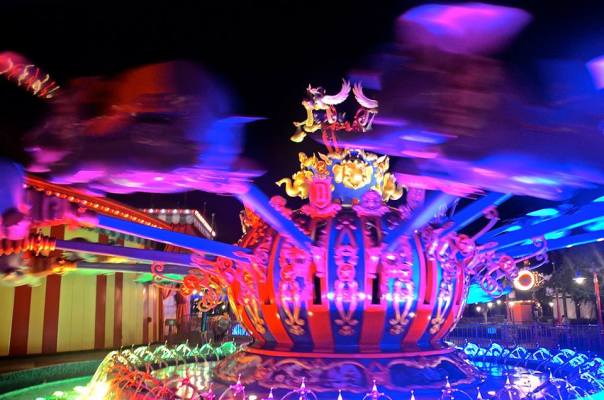 10. Dumbo – It doesn’t get much simpler than Dumbo but I just couldn’t pass up the first classic spinner.  As you fly high in the air or close to the ground in your flying elephant, the breeze cools and the views are an added benefit to this attraction.  Sure, it’s not the most exciting attraction but that’s what this blog post is all about!

9.  Pirates of the Caribbean – This attraction barely made the cut because it’s a little frightening for kids and there is a drop at the beginning of the ride.  Disregarding those two warnings, Pirates is a nice, slow ride through a cool Caribbean night.  There is plenty to be entertained by, as the sight gags are second to none.  As you probably know, Pirates is about as classic of an attraction as there is.  I do enjoy the Disneyland version more than Magic Kingdom’s.  Haunted Mansion could have taken this spot, as well, but it’s just a little too spooky.

8.  Jungle Cruise – While we’re on the subject of slow boat rides, I thought the Jungle Cruise could come next.  This should maybe be higher on my list but I remember being a little bit frightened of this attraction when I was younger (which isn’t saying much).  There is so much history with this attraction.  The Jungle Cruise is still entertaining to this day, even with animals that are about to celebrate their 60th birthday in Disneyland.  I can never decide which version of this ride I like the best, as they are both great.

7.  The Railroads – Much has been made of Walt Disney and his love for trains.  Both the trains that circle Disneyland and Magic Kingdom give you a slow peak around the most magical places on earth.  They are also an opportunity to do something that isn’t done very often, ride a steam engine train.  The narration pulls guests back into generations that they have never lived in, and life feels a little simpler when on them.  I enjoy Disneyland’s better as there are a few more interesting items to look at.

6.  Storybook Land Canal Boats – As you are starting to see, I really enjoy slow boat rides.  This one in Disneyland takes you through mini-lands that they have built along the banks of this canal ride.  The detail in these lands is terrific and the ride itself is slow so that it’s easier to take it all in.  It’s a beautiful ride at night, although a little harder to see everything.  You know, because it’s dark at night. 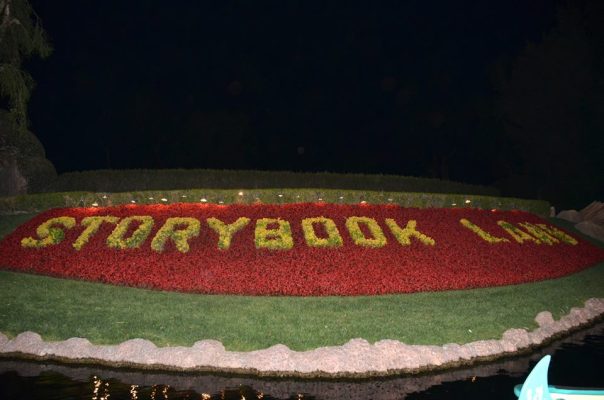 5.  Peter Pan’s Flight – As I said in the opening, this attraction doesn’t succeed in really relaxing a guest.  That’s not the goal.  The ride above England and Neverland is fairly short and can move at a little bit of a quicker pace.  If it didn’t do that, it would probably finish first on my list.  The attraction does cool guests off and captures imaginations as you fly through the sky.  There are many details to see and sometimes I wish it would go even slower so that I could catch them all.  I’m really excited to see the additions they have added to the Disneyland version that will reopen in July.

4.  The Riverboats – Back to boats!  Both riverboats (the Mark Twain and Liberty Square) take guests around Tom Sawyer Island to enjoy some views that they wouldn’t otherwise get.  Much like the railroads, riding a steam-engine powered riverboat isn’t exactly commonplace in today’s day and age.  This takes you back in time and is pretty relaxing as the pace is slow and a cool air comes off the water.  There are also areas that guests wouldn’t get to see unless riding this attraction.  This is also one of my favorite places to get photographs, if you are into that.

3.  It’s a Small World – Probably the most divisive attraction on my list, I’ve always been on the pro-side of It’s a Small World.  For some people, this won’t be relaxing as they will want to plunge their head under water to avoid hearing that blasted song for the 27th time.  For me, I love looking at how the designs change from scene to scene.  My favorite part of the attraction is listening to the small changes in the music as you go from different countries.  There is a ton of detail to look at and a ton of history within the attraction.  I prefer the Disneyland version of this ride.

2.  Spaceship Earth – This attraction has gone through many narrators and narrations throughout it’s time.  According to some, currently this is the worst rendition of those but I still really love this attraction.  A perfect blend of entertainment and information, Spaceship Earth takes guests through time to look at how technology has evolved since the beginning of man.  The attraction takes a slow pace inside of the giant ball that Epcot is known for.  The attraction is pretty long and there is a ton of stuff to look at.  This is the perfect thing to ride while the rest of your group is throwing up on Mission: SPACE.

1.  Living with the Land – I take it back, this is the perfect attraction to ride when your group is on Mission: SPACE.  Living with the Land is (or was) quintessential Epcot.  As you sit down in your boat (you knew a boat ride had to win), the attraction takes guests through various scenes on growing plants and food in an environmental way.  While some may call it boring, seeing the different ways that they are growing vegetables inside the greenhouse always fascinates me.  There is plenty to see, as well.  I learn something new every time I ride this attraction and really enjoy the easy-going nature of Living with the Land.

Which attractions did I miss?  Let me know in the comments!  After the jump, I’ll link to some of our favorite and most popular posts over our first 100.

Thank you all for supporting Wandering in Disney!