Coronado Springs Resort is a moderate resort at Walt Disney World. The resort is in the Animal Kingdom area. Coronado Springs opened in the summer of 1997 and has a Spanish-Colonial theme. Like most of the moderate resorts, Coronado features sprawling grounds and many rooms. The resort is also Disney World’s most popular convention space. In 2019, the resort opened a tower, Gran Destino, built off of the lobby to go along with the array of rooms throughout the grounds. In this post, we’ll review the hotel’s rooms and grounds along with breaking down if Coronado Springs is a good value. 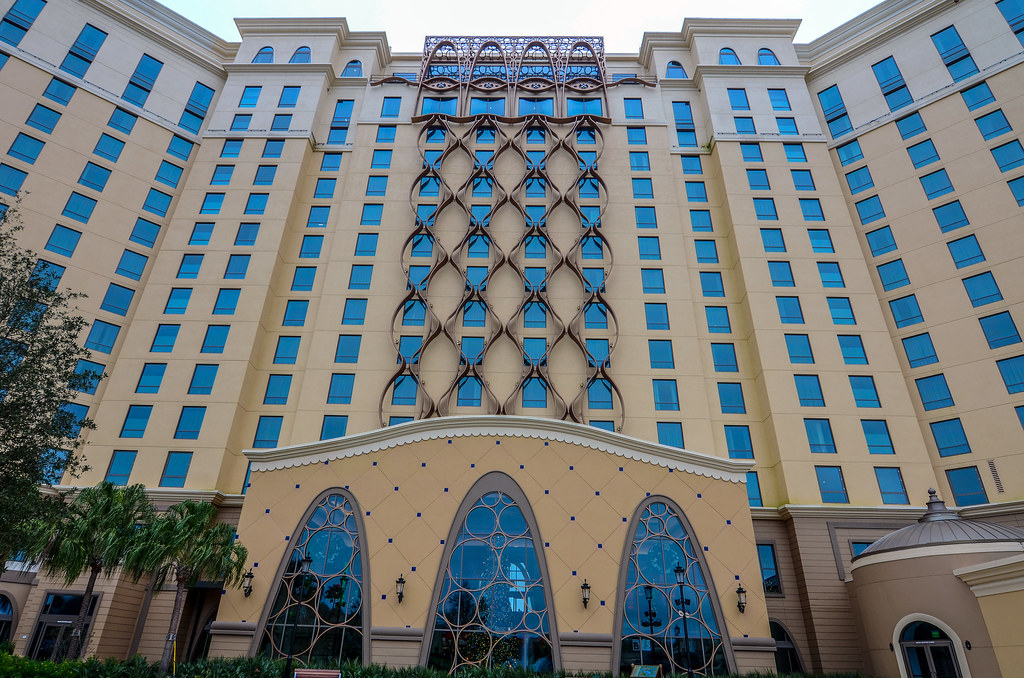 The addition of Gran Destino Tower has brought more eye candy to Coronado Springs. Instead of the lake (apparently called Lago Dorado) being the focal point, it’s impossible for eyes not to be drawn to the looming tower. While I don’t think Gran Destino is ugly by any means, it’s not particularly interesting. It basically looks like a generic hotel with a few extra flourishes on the outside. I won’t go as far as to call it distracting from the otherwise beautiful architecture, but it doesn’t help the character or charm of the resort. 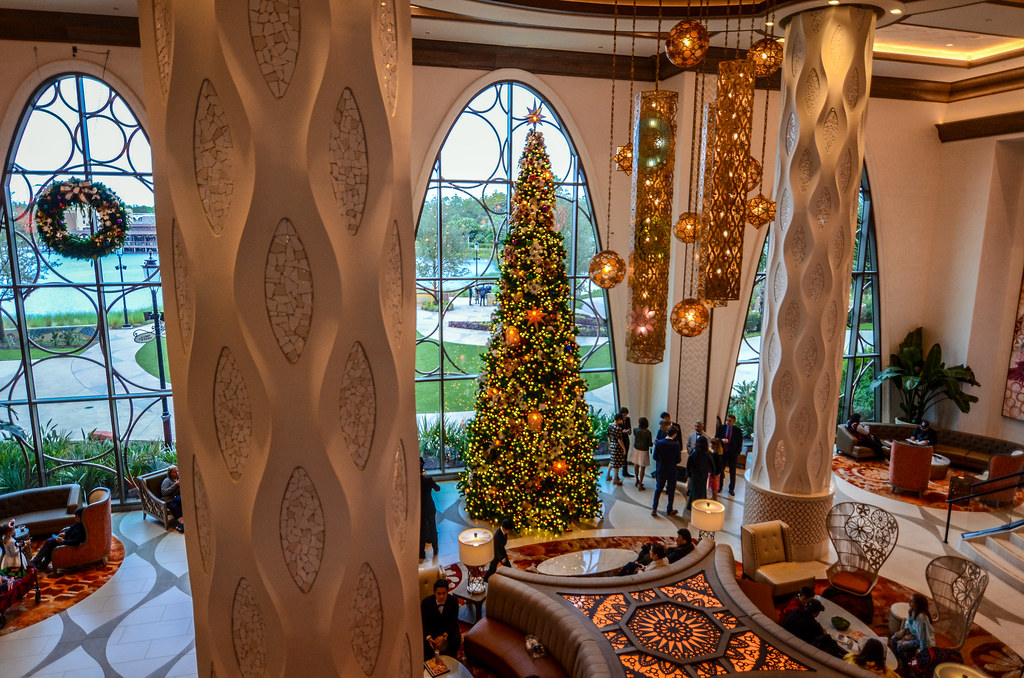 Inside of the tower and lobby is a different story as most of the decor is tasteful. Granted, we were there at Christmas time so the stunning tree adds some charm. Still, I was impressed by the detail and pattern throughout the grandiose lobby. There’s an argument to be made about whether the decor inside of the tower fits in with the rest of the resort. The best resorts flow seamlessly from the lobby through the grounds and all the way into individual rooms. Coronado Springs doesn’t do that at this point, as the lobby simply feels too extravagant for the rest of the grounds. That’s not to say it isn’t beautiful, because it is. Of course, saying that the theme doesn’t flow perfectly is being nitpicky and shouldn’t dissuade anyone from staying there. 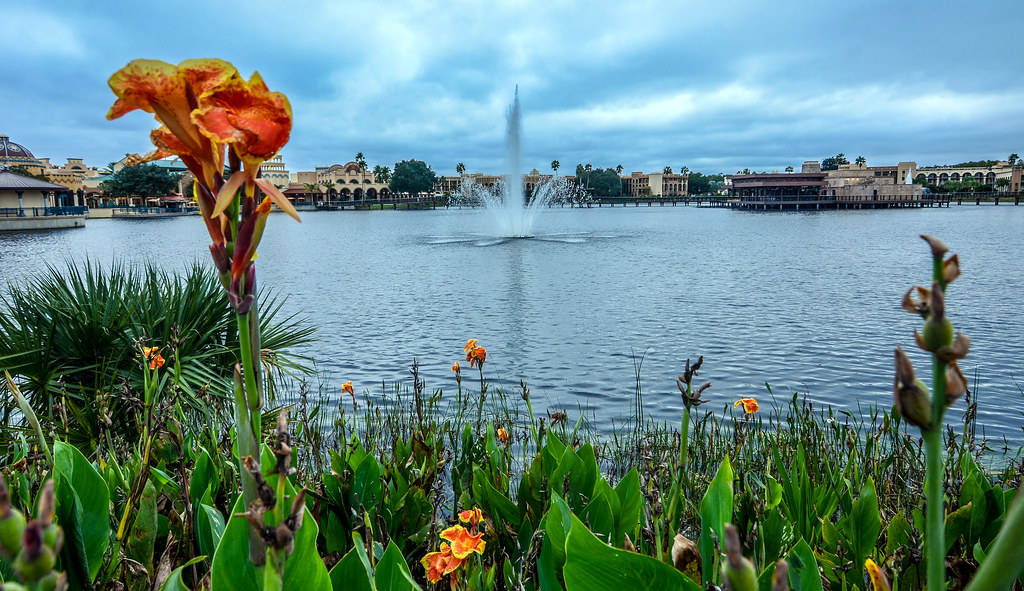 Once outside of the lobby, Coronado Springs is beautiful and all of the work done prior to Gran Destino Tower opening is noticeable. The paint looks fresh and gives the grounds some beautiful color. There are bridges that cross the water along with a path that does a full loop around the water. Coronado Springs is a pleasant place to walk around if the weather isn’t overbearing. Compared to the other moderate resorts, I think I like the grounds at both Caribbean Beach and the Port Orleans resorts more but this isn’t far behind and is slightly more compact.

Coronado Spring’s refurbishment and tower addition has made the resort look better but also took away some of its charm overall. From a broad standpoint, Coronado still has a theme that runs through most of the resort and is well executed. The renovation stretched to the rooms too so let’s check those out! 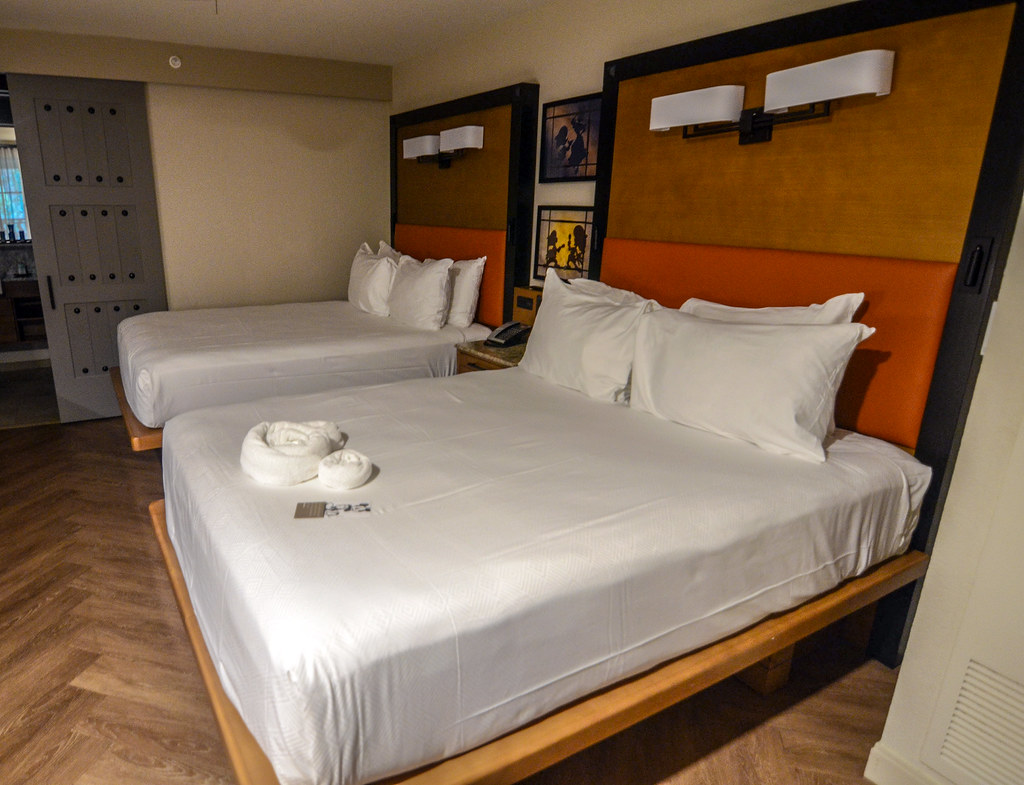 The resort’s rustic colors stretch into the room with the burnt orange and brown colors of the headboard. I enjoy the Three Caballeros artwork but otherwise find the room, here’s that word again, generic. The off-white walls and simplistic design remind me of what I can find in a big chain hotel. It’s not that I don’t like the design, there’s just not much personality to it. From a practical standpoint, the beds were comfortable and it was a pretty average hotel room size, much bigger than the value resorts. 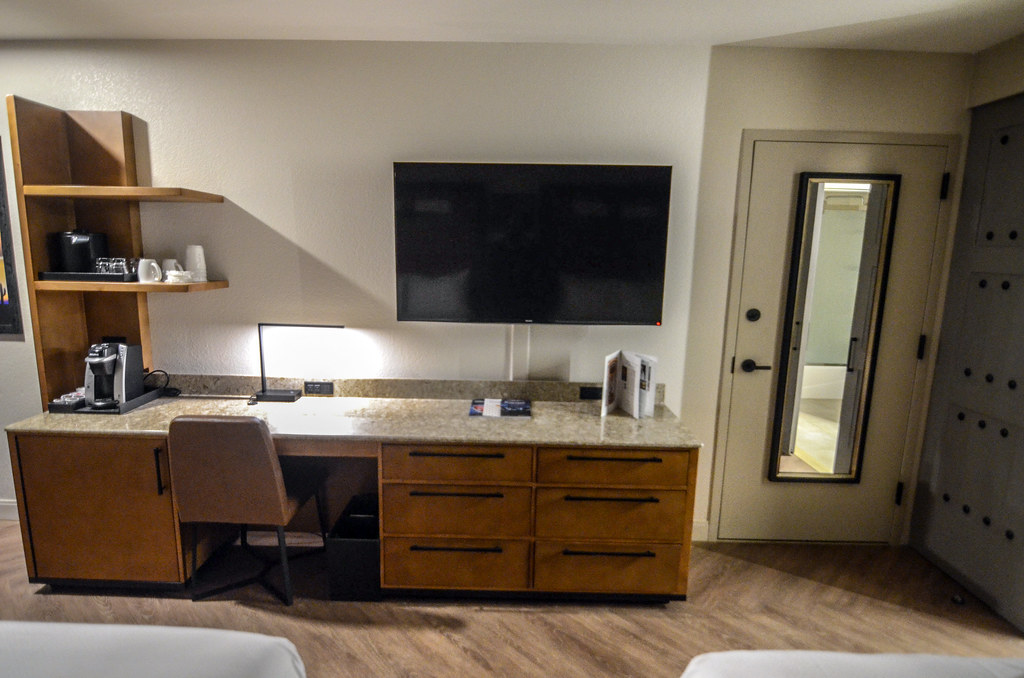 Try to spot the Andrew in the TV! Seems like a decent desk that I definitely did not use while on vacation. The TV is centered between the two beds, which is absolutely the right move but I can’t imagine that anyone really cares that much. 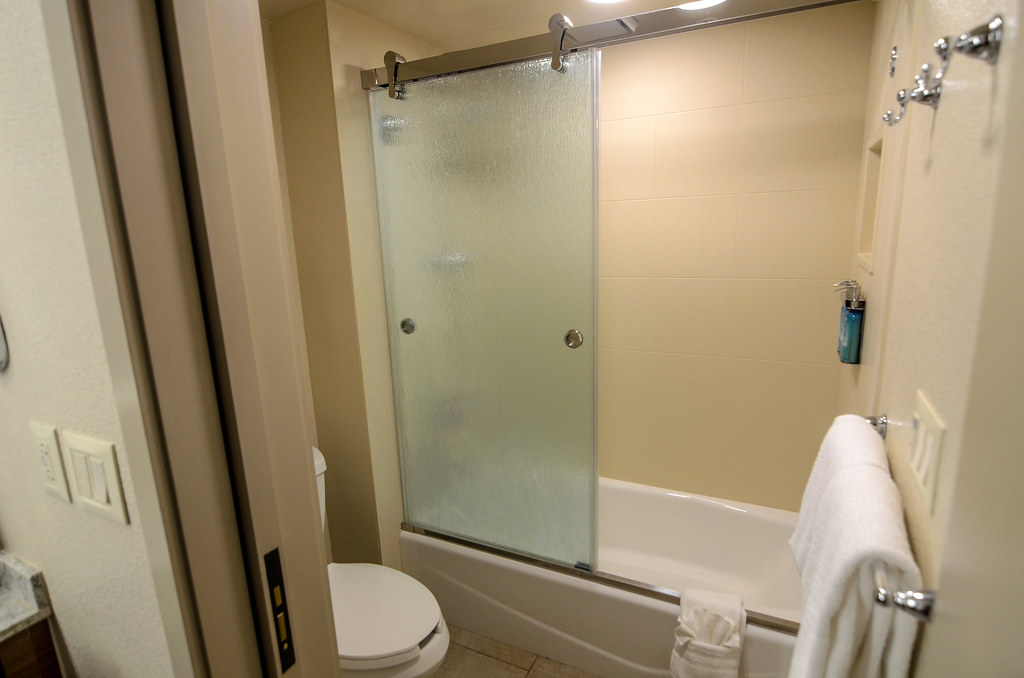 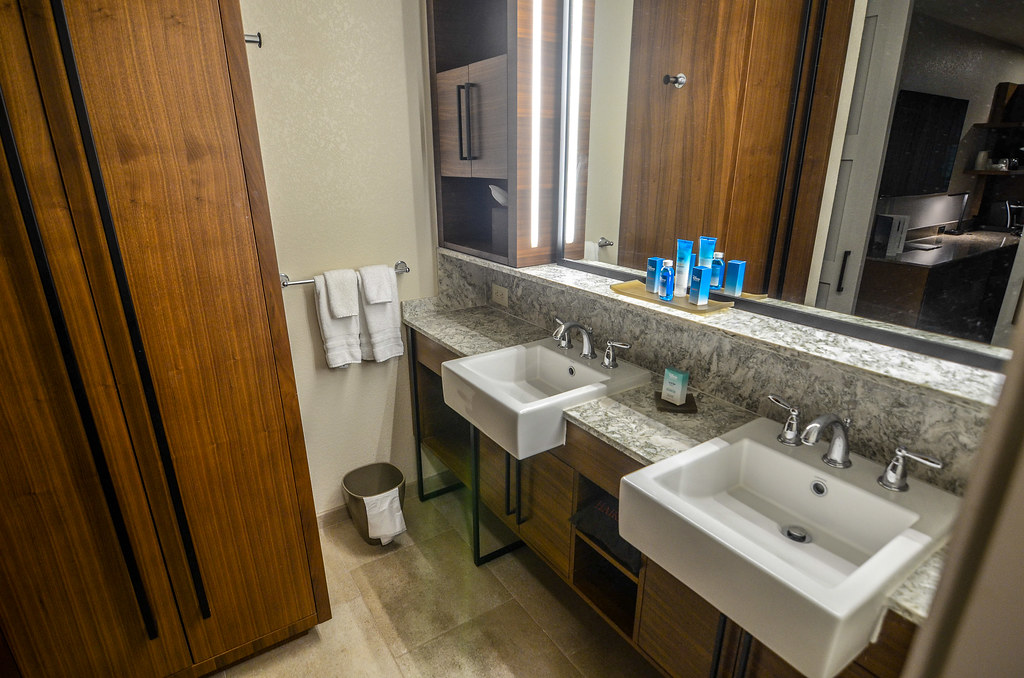 The sink area matches the rest of the room and looks pretty good. Two sinks is always nice, as is having them outside of the bathroom. There was a sliding door to separate this room from the bed area. 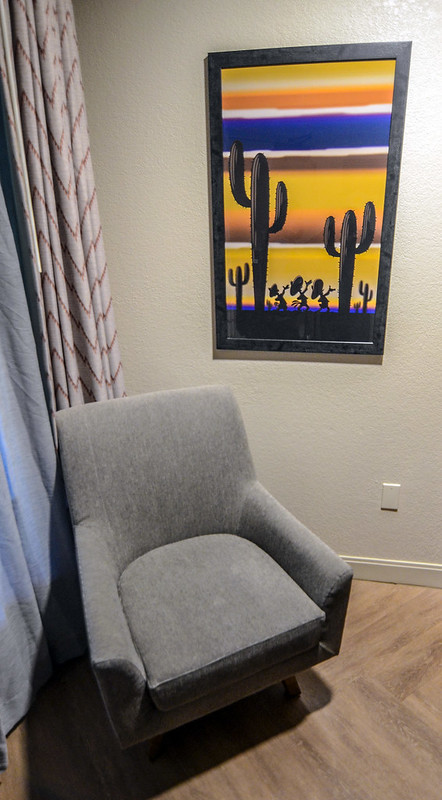 I find the room to be fairly bland. Outside of the sweet Three Caballeros art there is no decor that stands out and no ‘Disney touch’, if you will. Of course, there isn’t anything wrong with the room either. This is still a better option than a few of the value resorts because of the larger room size. But the remodel didn’t do the room any favors from a personality standpoint. 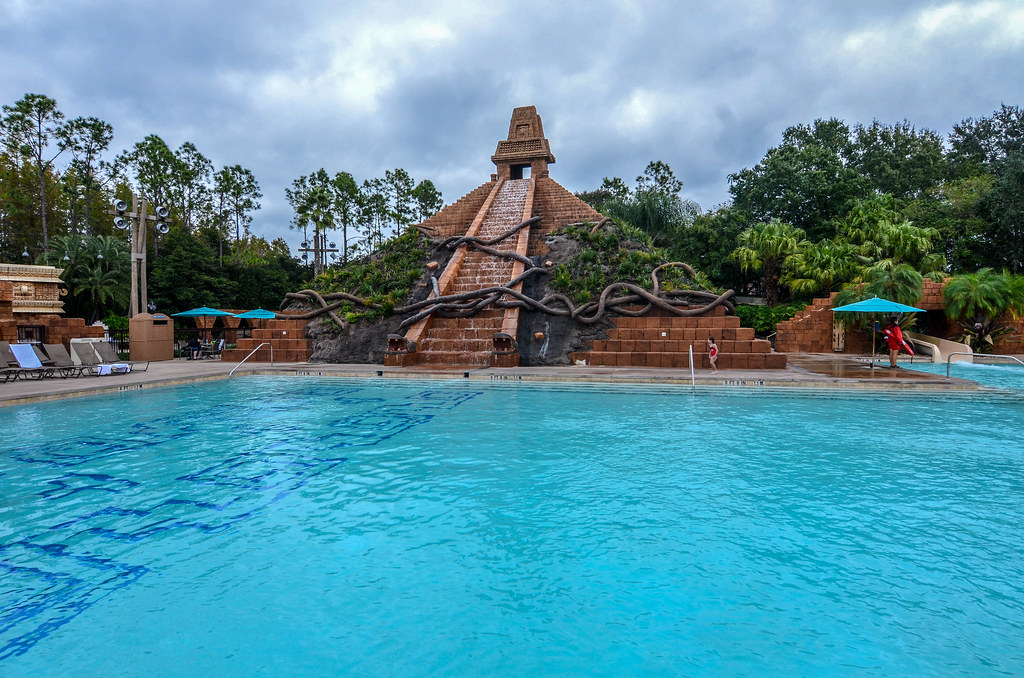 The amenities are where Coronado Springs really shines.  First of all, the pool is one of the best resort pools at Disney World. Called the Dig Site, this area features a fun slide, a cool pyramid, a gigantic hot tub, and a few fun, non-swimming areas. If swimming is a big deal to you (or your kids) then the Coronado Springs pool is one of the best options, especially at the cost it generally is. I’d give the Dig Site a slight advantage over the Caribbean Beach Resort pool but it’s close. 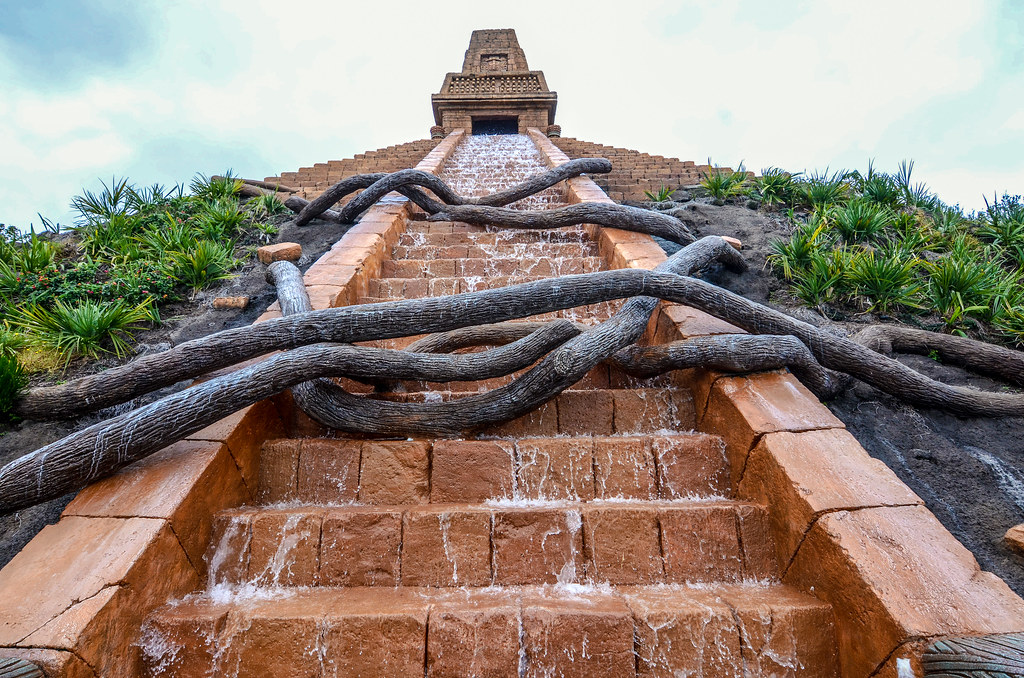 Coronado Springs also offers one of the best food courts in Disney World called El Mercado de Coronado. This is a counter-service location and they offer a wide variety of food. Here is a look at the menu. There’s also a nice bakery area that serves gelato and other goods around the corner from the food court. There’s also the Barcelona Lounge at the base of the new lobby. The lounge specializes in coffee as well as alcoholic drinks. 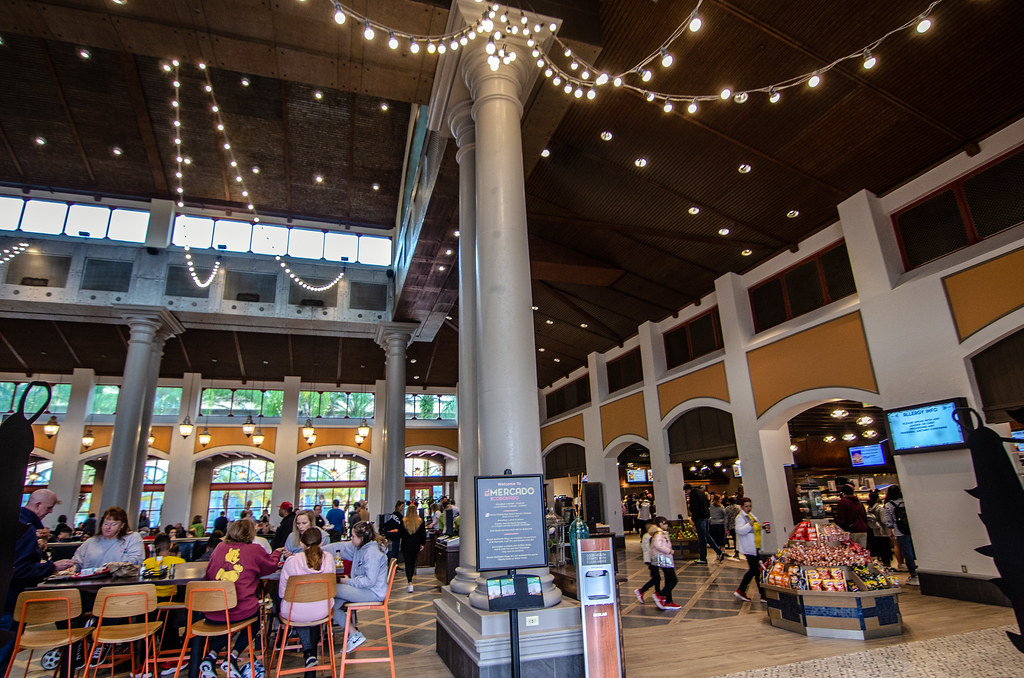 As far as sit down restaurants, Coronado Springs has gained a lot of ground in this area. Maya Grill remains a solid option for those wanting Mexican food. Toledo – Tapas, Steak & Seafood is a new fine dining restaurant on the tower’s rooftop. It offers a beautiful view albeit at a high price point. Three Bridges Bar & Grill sits in the middle of the water and is a table-service restaurant (Disney Dining Plan is not accepted) at a lower cost than the other options. Coronado Springs Resort has a nice variety of restaurants and food for everyone. 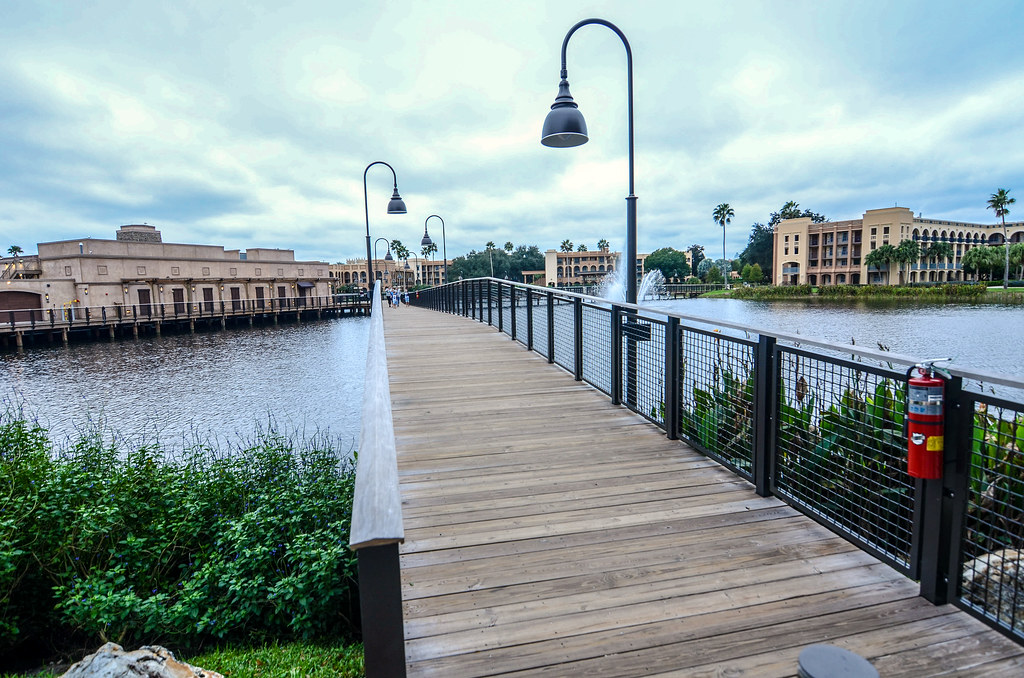 The resort doesn’t have a bad location as far as bus transportation goes. As I stated, it is very close to Animal Kingdom and Blizzard Beach. The rest of the parks are a little further away but no more than a 20 minute bus ride. There are several stops throughout the resort for buses, the last of which being outside the lobby. We never had any issues in waiting for transportation either.

As far as value goes, Coronado Springs is one of the cheaper moderate resorts. Prices typically range from $150-$220 depending on the time of year. As far as what it’s worth, I wouldn’t pay over $175 unless there were special circumstances. The amenities are nice but not on a deluxe level. And over $175 is near deluxe level to me. If you can find Coronado under $150 then I’d absolutely recommend it.

Coronado Springs has average rooms that are made up for with amenities that the hotel offers. Unfortunately, I believe the resort is just barely missing the mark. The theme and architecture is nice but disrupted by the tower. All in all, it’s on par with the other moderate resorts.  I prefer Port Orleans to Coronado but there isn’t a big gap.

Have you stayed at Coronado Springs Resort? Let us know your thoughts or questions in the comments. If you enjoy what you’re reading here on Wandering in Disney please subscribe to the blog and like our Facebook page. You can find both of those on the right side of this page. Thank you for reading, we really appreciate it!