Boma is an African buffet at Animal Kingdom Lodge that offers breakfast and dinner. The price of the buffet is currently $43 per person for dinner. Boma is on the Disney Dining Plan as a one-credit option. The restaurant offers an Annual Pass Discount and offers Tables in Wonderland. In this post, we’ll review the food Boma offers as well as examine the restaurant’s value.

As a general rule, I try to stay away from buffets. While breakfast buffets are somewhat safe, lunch and dinner buffets aren’t consistent enough. Making food in large quantities for hundreds of people isn’t an easy task and the food usually shows this when compared to meals where you order off the menu. This usually holds true for Disney, as well. Boma is the exception.

Boma initially intrigued me (outside of the rave reviews) because of the different kind of cuisine it offers. While there were some safer dishes, Boma offers a wide range of African-inspired dishes. I’m sure they are toned down to a degree but there are plenty of new flavors for everyone to try.

Boma places you in a lively, African marketplace. Seating is under a thatched roof, and while you know you’re under cover it does feel as if the restaurant is in open air. There are vibrant colors around, with lanterns hanging from the ceiling and different colored fabrics stretched out above. 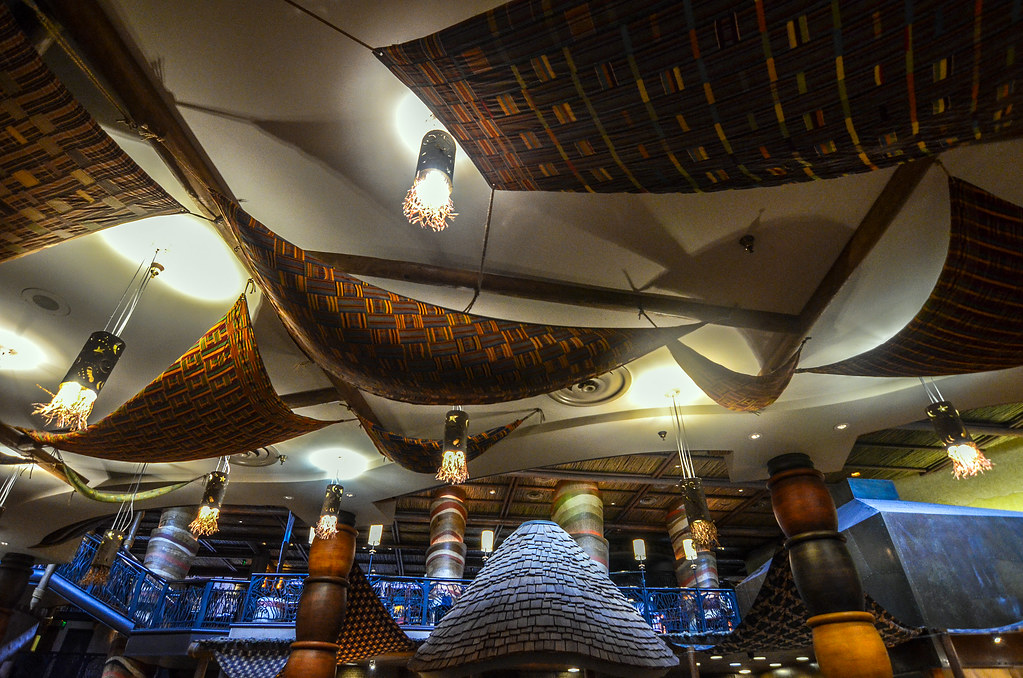 My family and I went to Boma on a weekday evening and had an early evening dining reservation. We were seated quickly and were able to go to the buffet almost immediately. My sister doesn’t eat gluten and is also dairy free so she told the waiter that. The waiter let the kitchen know and that brought out one of the chefs who was happy to show her around the buffet area showing her what dishes contained what. If you have any dietary restrictions, always share them with the staff at Disney restaurants. This will make the experience better for you and them.

The food at Boma is spread out over four or five different stations. Like a typical buffet, similar foods are put together with salads in one area, meats in another, so on and so on. 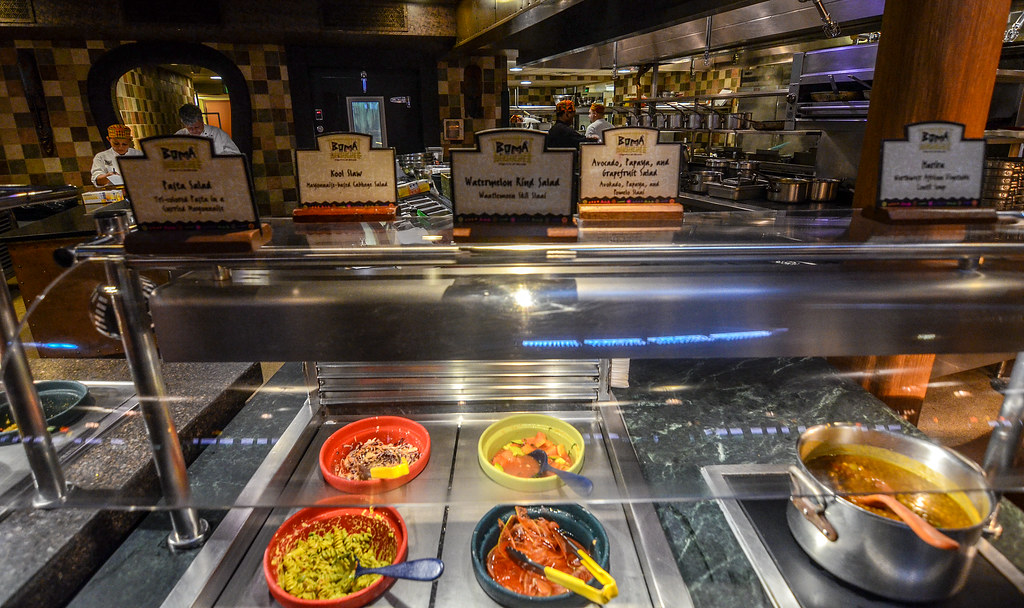 The salads and soups are particularly interesting at Boma. While they did have your standard green salad, there was quite a mix of different items to try. My favorite among these was the Apple Jicama Salad. It was light and flavorful. Don’t overlook the salads, there’s plenty of intriguing options here.

The soups were another winner for me. There were five different soups on that night. I believe this buffet changes some of what’s offered seasonally, if not nightly. The menu on the Disney World website lists eleven soups for the buffet, so what is offered may depend on the night. I tried several different soups, my favorite being the Curried Coconut Seafood Stew. It was creamy, with a little bit of spice and had a decent amount of seafood in it. I enjoyed all of the soups that I tried. 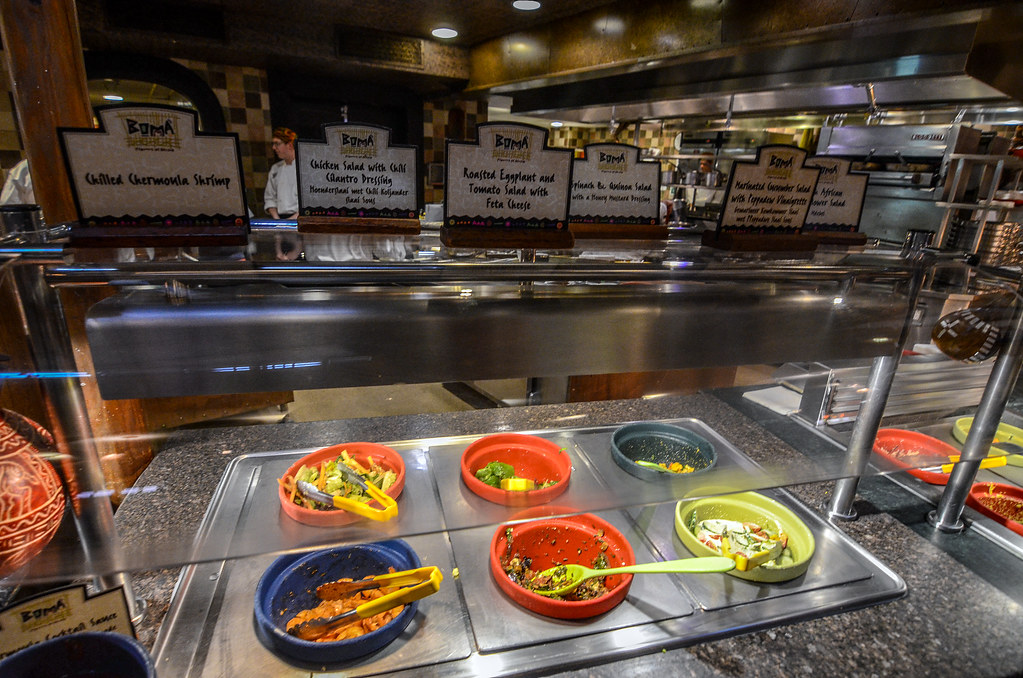 There were a variety of meats offered and, again, I believe these change out seasonally if not nightly. There wasn’t much seafood offered when we went but there were different varieties of pork and chicken as well as several different curries. A few specialties (or classics) that Boma offers are there year-around like the Bobotie, Pap and Chakalaka.  Out of these, the Bobotie was easily my favorite. It is a dense dish consisting of meats inside of an egg and bread like top. That description doesn’t sound like much, but I really enjoyed it and many people go to Boma just for this dish. There is a picture below (please excuse the low quality of the picture).

The meats were very good. I enjoyed the other aspects of the buffet more, which is strange for me, but that’s because the salads, soups and sides were so good not because the entrees were disappointing.

Last but not least, we came to the desserts. There were many items to try including bread pudding, cakes, tarts, and the famous Zebra Domes! Aside from the bread pudding every item came in mini-sized so that you can just grab and move on to the next item instead of dishing up at each station. This didn’t stop me from grabbing multiple Zebra Domes. A Zebra Dome is one of the most sought-after desserts in Disney World. They have a white chocolate mouse (with a little cake inside of them). They contain Amarula Cream Liqueur that sets them apart from other desserts. While they aren’t my favorite dessert at Walt Disney World, they are in my top-5. You can also get them at The Mara (the quick-service location in Animal Kingdom Lodge). Other desserts I enjoyed were the Kenyan Coffee Tarts and the bread pudding. 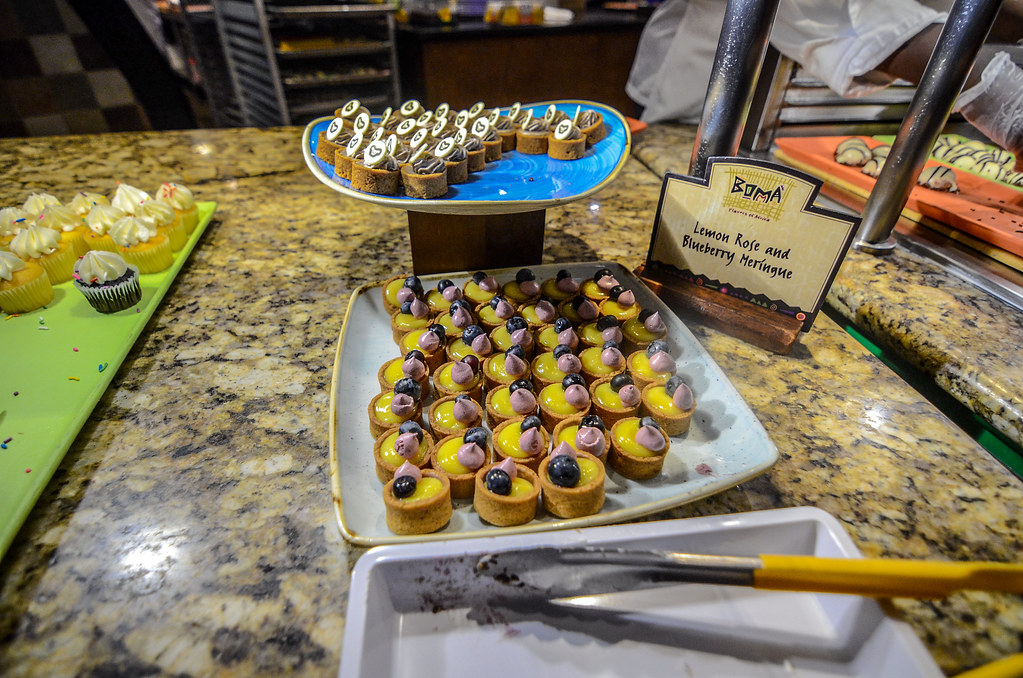 As I mentioned earlier, a chef helped my sister come up with items that she could eat at the buffet. When it came dessert time, they brought her out a special plate of desserts that fit her diet. It was very thoughtful and the beautiful presentation made my plate look like a sloppy mess, albeit a delicious sloppy mess.

Overall, Boma was a very fun experience filled with very unique and wonderful food. While I love to try new places to eat at Disney World, Boma might be a restaurant that I have to circle back to soon. Some may balk at the high price, remember that it contains dessert and drinks (and basically an appetizer). This puts the price more in line with other Disney restaurants. A trip to the Animal Kingdom Lodge is worth the time in itself, but you may as well stop in at one of the restaurants there too. I highly recommend Boma and would gladly spend any evening there.

Have you tried Boma? Let us know your thoughts or any questions you have in the comments. Planning a trip to Walt Disney World? Check out our Disney World Trip Planning Guide to help you out. If you enjoy what you are reading here on Wandering in Disney please share this post with your friends, as well as like our social media pages. You can also subscribe to the blog via WordPress or email. All of those links are on the right side of this page. Thank you for reading, we really appreciate it!