Storybook Dining at Artist Point is a table-service dinner at Walt Disney World’s Wilderness Lodge. This is a character meal that features Snow White, Grumpy, Dopey and The Evil Queen. Storybook Dining serves a prix-fixe 3 course meal with shared appetizers and desserts along with your choice of entrée. American cuisine is mainly offered with hints of Snow White’s Germany in the menu. The restaurant does take part in the Disney Dining Plan as a 1-credit option and also has a 10% discount for Annual Passholders. As of April 2019, Artist Point does not accept Tables in Wonderland. We recently had a meal at Storybook Dining at Artist Point and this post will cover that experience, along with photos from our meal.

I won’t bury the lede, we really enjoyed our meal at Artist Point. There is one big caveat to get to before that though. Storybook Dining at Artist Point does not fit thematically in Wilderness Lodge. Snow White and the Seven Dwarfs is based in Germany and Wilderness Lodge invokes U.S. National Parks, specifically those in the Pacific Northwest. I guess you could argue that Snow White largely takes place in the wilderness but that’s looking at theme from a very surface level. 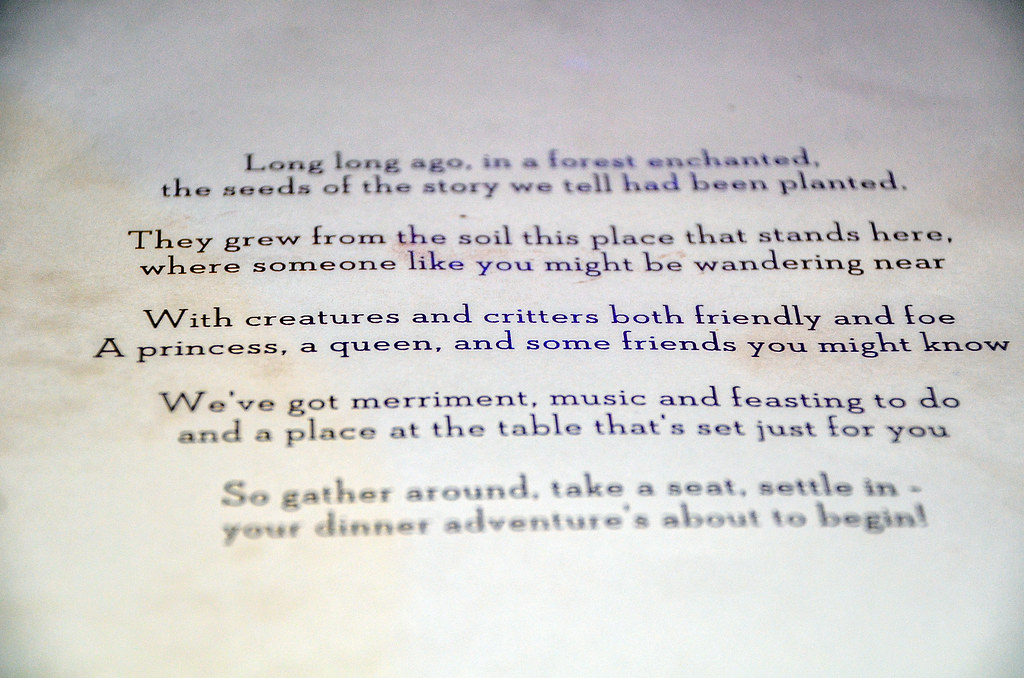 No, this shouldn’t be a huge sticking point in whether you dine at Artist Point. The restaurant still does a decent job at showcasing the beauty of Wilderness Lodge and the meal is fantastic when setting aside the obvious theme discrepancies. Unfortunately, there is this asterisk that’s becoming normal throughout Disney Parks. Theme has taken a back seat to characters for the company and many fans. These components aren’t mutually exclusive as Tokyo Disney Resort does a fantastic job of integrating characters well within theme. Sadly, I don’t see that as carefully done in the American parks (it’s not flawless in Tokyo or any resort) and I don’t think this trend will suddenly reverse itself. Storybook Dining at Artist Point is just another small drop in that bucket.

Now that the negativity is out-of-the-way, Storybook Dining at Artist Point executes what it’s going for almost flawlessly and has become the best character meal in Disney World. While I understand that Snow White and the Seven Dwarfs isn’t everyone’s favorite movie (it’s definitely not mine), the personalities of the characters is diverse which I always appreciate in a character meal. Snow White, Grumpy and Dopey all come around to tables while guests eat, and all offer a different interaction. Melissa loves Grumpy and this was a great way to meet him without the long lines of a holiday party. Our interactions were fairly short but I never know if that’s the characters saving time since we’re adults, the schedule being tight, or if we’re just awkward. I hope it’s the latter but there’s not much way to tell.

After your meal, The Evil Queen meets guests in the middle of the restaurant. If you are thinking that having a meet & greet in the middle of the restaurant is strange, well, you’re right. There are times during the meal when The Evil Queen is just pacing around without anyone going up to her. I was in a seat facing her and by the time I got up there to meet her I was actually afraid. Good acting! That glare is intimidating.

Personally, I don’t love character meet & greets but the diverse characters here make for fun interactions. As much as I love the Fab Five or a bunch of princesses, I think meeting them all in succession can be monotonous (relative to other Disney experiences). That is not a problem here with the different characters offered.

As for the atmosphere at Storybook Dining, the restaurant is unsurprisingly beautiful. Artist Point’s decor didn’t change much outside of adding trees inside the restaurant. Wilderness Lodge is a gorgeous hotel and the restaurant has large windows throughout that offer views of the resort’s landscape. 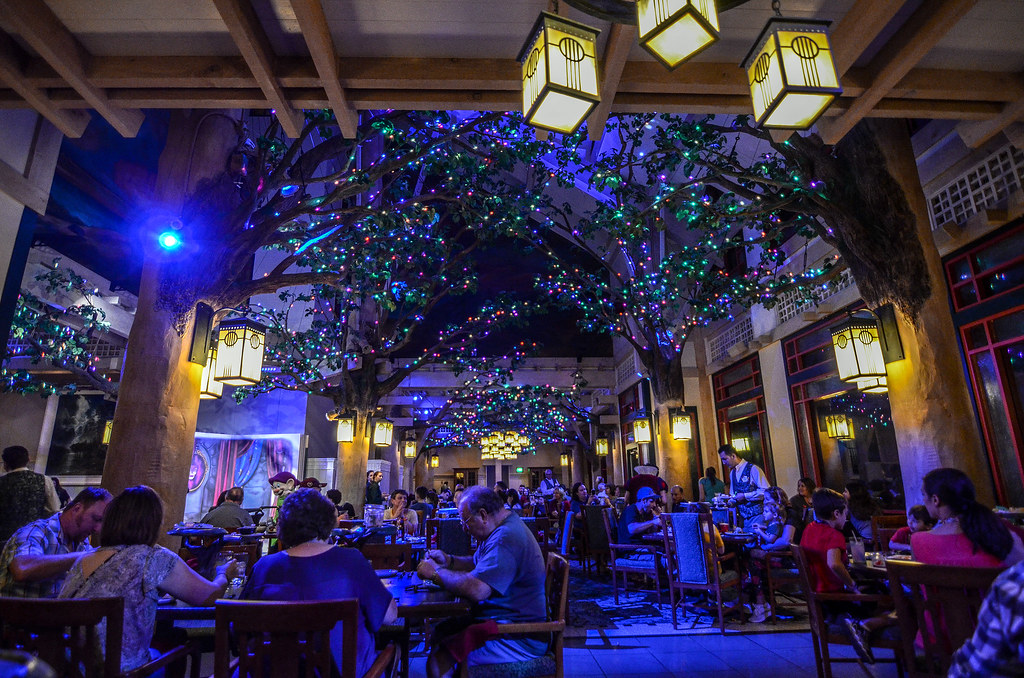 Inside the restaurant, the trees light up throughout the meal. Otherwise, Artist Point has nice mood lighting and is fairly dark if you go after sunset. If you go before the restaurant is beautifully lit in natural light. Outside of the characters, there aren’t many nods to Snow White. The trees fit both the IP and the restaurant well. Overall, the environment showcases Wilderness Lodge beauty and is tastefully decorated on the inside.

Moving on to Storybook Dining at Artist Point’s food, here’s a link to the menu. 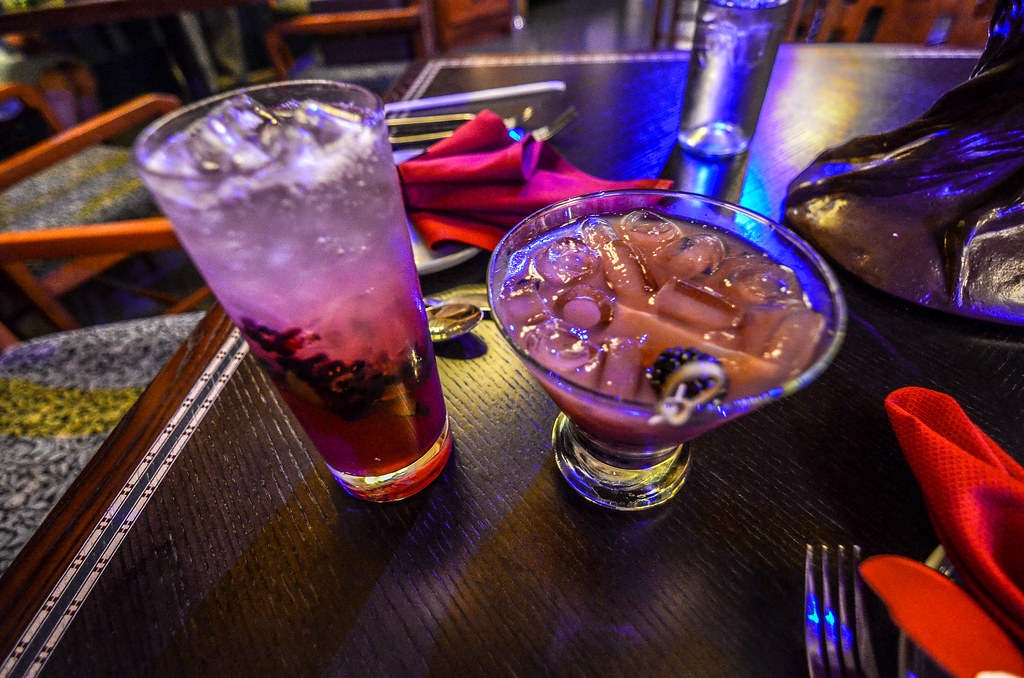 I typically wouldn’t mention this but I ordered a cocktail (mostly because we were on the Disney Dining Plan) and really enjoyed it. This was the Evil to the Core cocktail, which had similar ingredients to a blackberry margarita. The drink was stronger than most other cocktails I’ve had at Disney World, outside of Disney Springs. That means it wasn’t very strong but enough to notice, unlike quite a few other drinks I’ve had at Disney World. I recommend Evil to the Core. 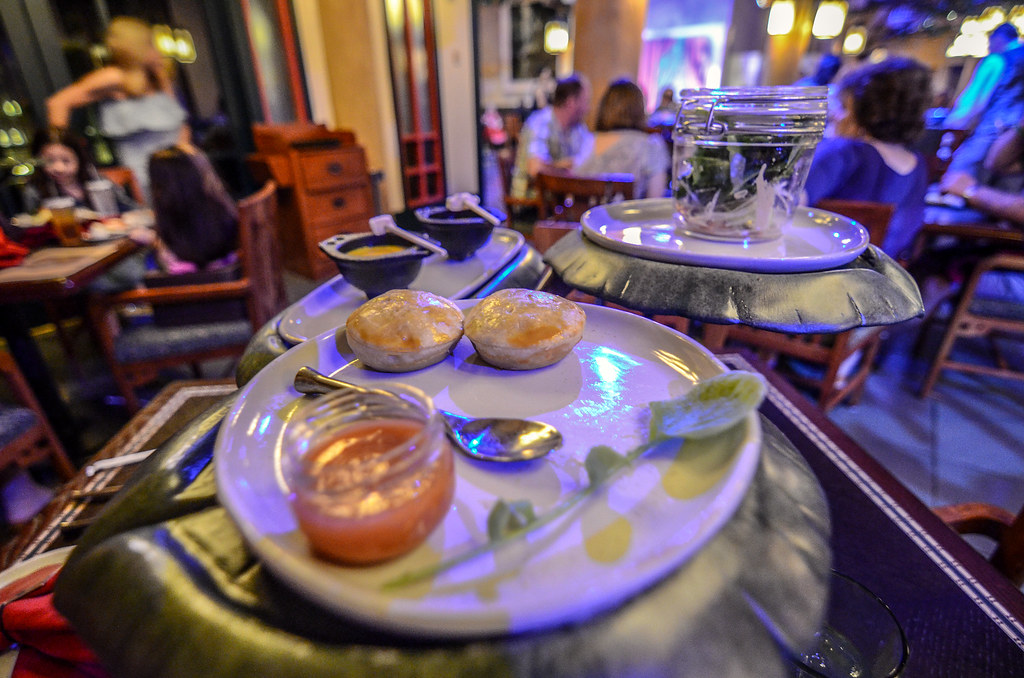 Guests will start with shared appetizers that include Winter Squash Bisque, Wicked Shrimp Cocktail, and Hunter’s Pie. You will be served the amount of these that are in your party, from what I’ve seen. Meaning if there are four in your party then you will (likely) receive four pies, bisques and shrimp cocktails. All of the appetizers were solid but not spectacular.

My favorite appetizer was the Hunter’s Pie. These were tiny, flaky pie crust with chicken, black truffle inside and fruit preserve served alongside the pies. The pies were very juicy and the chicken and truffle made for a savory bite. Adding in the preserve sweetened the dish, but I preferred the pie without the preserve. 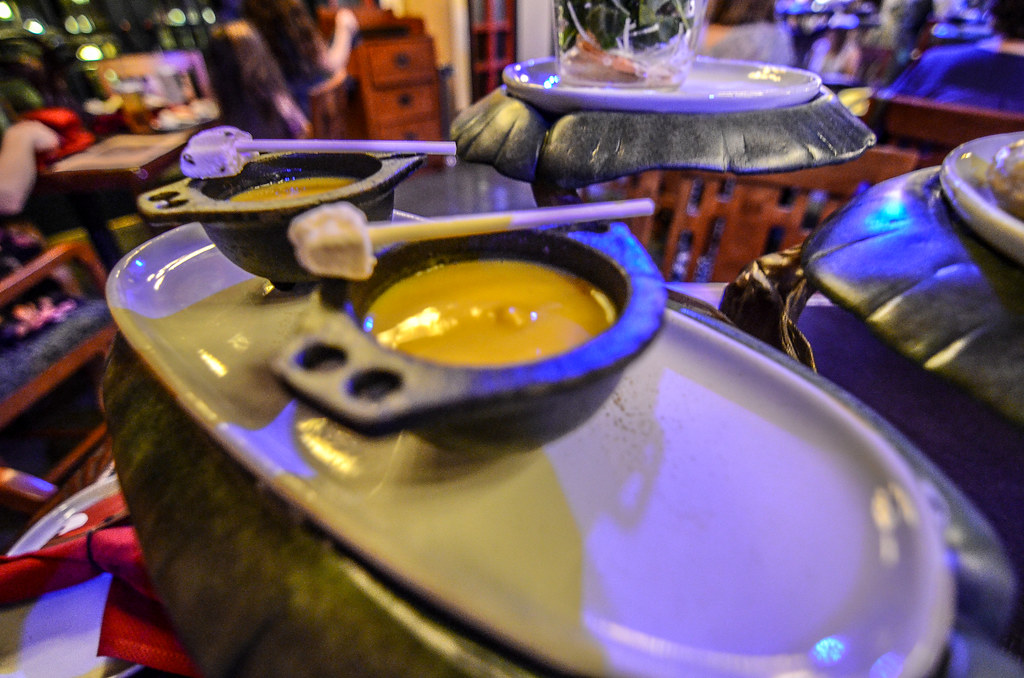 The Squash Bisque was served inside these tiny cauldrons was a nice touch. I don’t love squash but I like this appetizer pretty well, it was a thick, sweet soup that is buttery and creamy. I don’t think I’d enjoy a full bowl of this but as a small appetizer I liked it a lot.

The Wicked Shrimp Cocktail has a funny name is served in a mason jar. Shrimp and greens were topped with soy and miso. The menu says there was avocado in the dish but I didn’t taste that much. This was the worst of the appetizers but was still tasty. 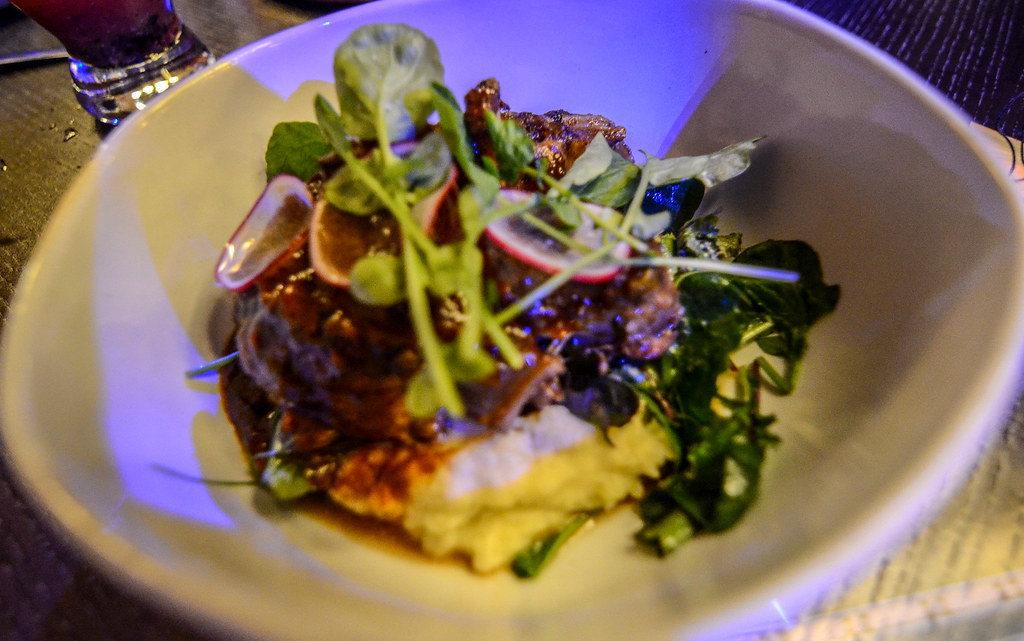 For my entrée, I ordered the Magic Mirror Slow Braised Veal Shank. This was veal with Jus, Celery Root Mashed, and Wilted Winter Greens. This is one of the best entrees I’ve had at Disney World. The veal was cooked perfectly and quite large. There wasn’t much fat on the meat and it had outstanding flavor. The sauce on top augmented the deliciously, creamy mashed potatoes.  Overall, the dish was fantastic and I’d highly recommend it. 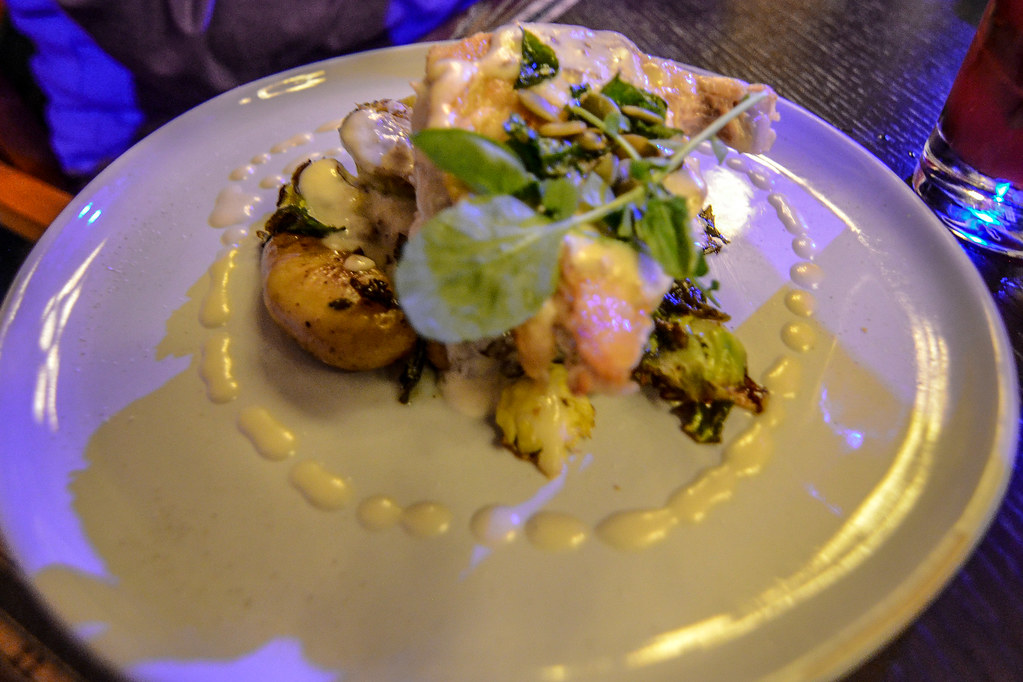 Melissa went with the Brother’s Grimm Roasted Chicken. The names of these dishes are pretty bad but I’m assuming the creativity went into the dish. Like the veal, this dish was fantastic. I don’t often enjoy chicken dishes, especially at Walt Disney World. This surpassed both of our expectations. The Roasted Chicken came with Confit Potatoes, Roasted Brussel Sprouts, Apples and Chestnut Butter. The butter really tied the whole dish together with its creaminess. The brussel sprouts gave the dish a slightly bitter flavor that was offset by the sweetness of the apples. If you’re looking for a good chicken dish at Disney World, this is the best we’ve found so far. 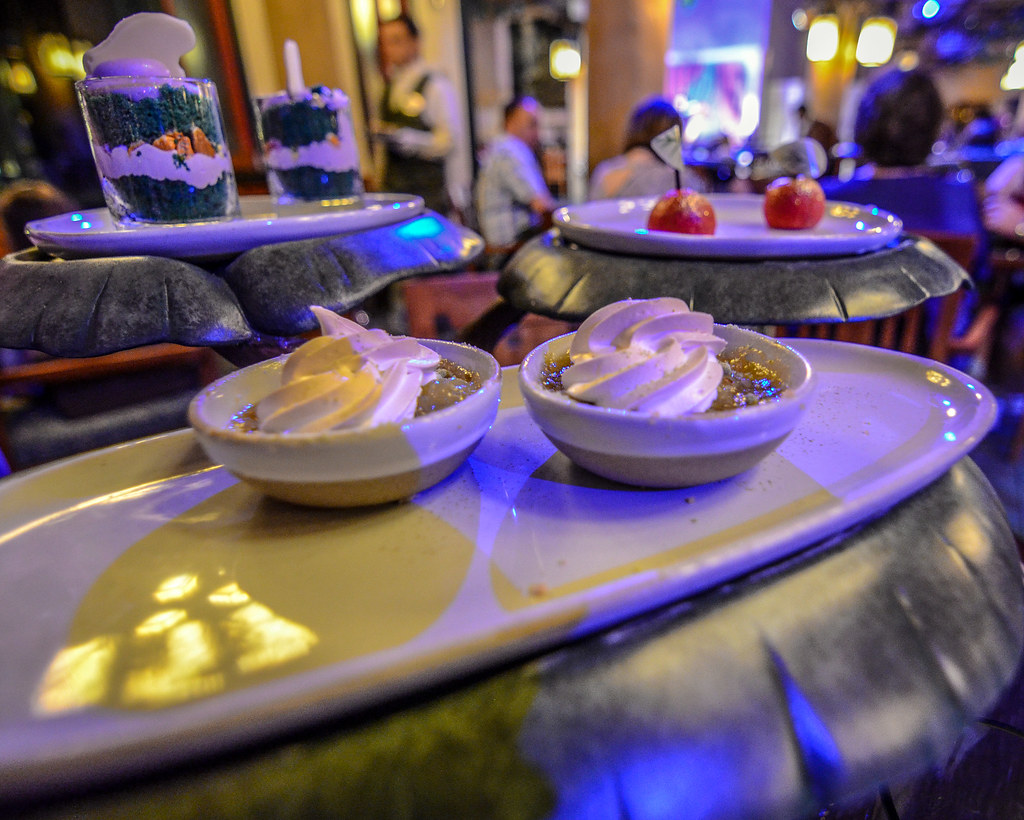 The desserts were less of a home run. Like the appetizers, these are all shared among the table. 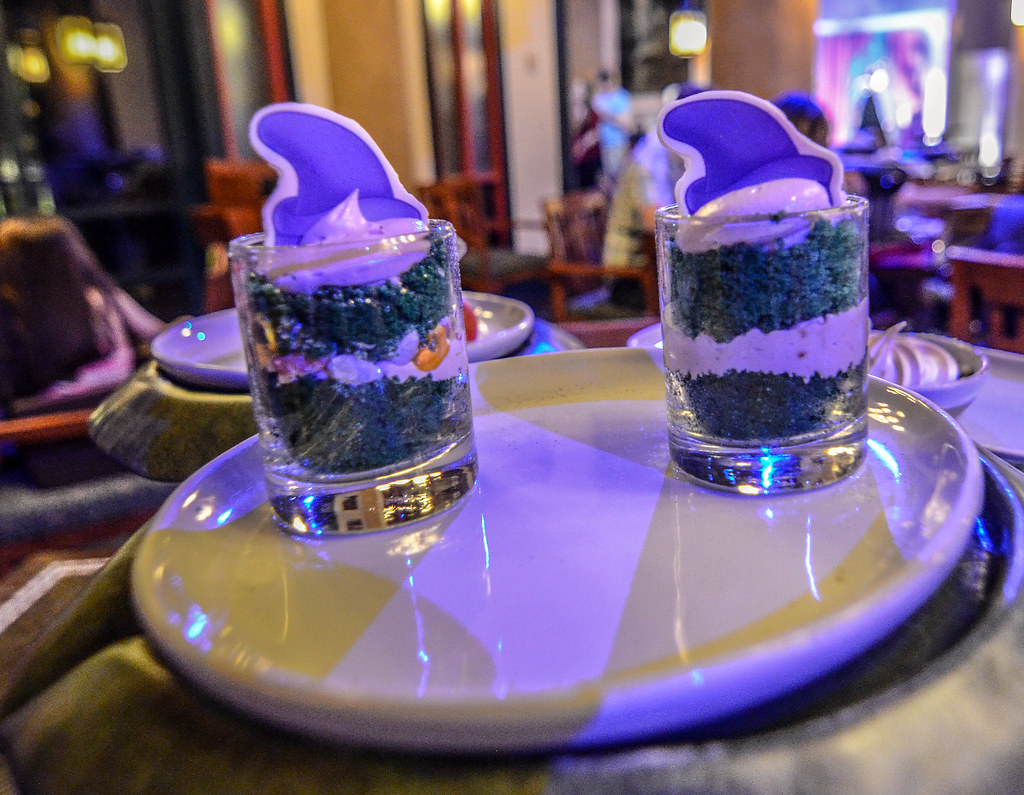 Miner’s Treasures had a cute presentation but neither of us enjoyed this Sponge Cake and Buttercream Icing. I thought the dessert was fairly dry and overly sweet. 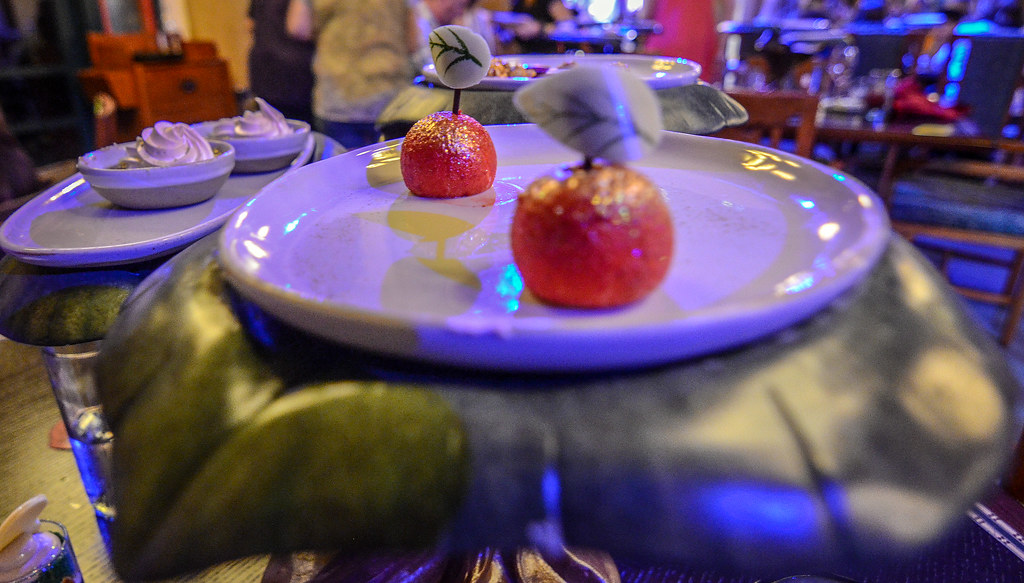 “Poison” Apple was a bit of a letdown too but they were beautiful to look at. This is Chocolate Mousse with a sour center. The flavor was certainly more interesting than the cake but was a little rich for me. I did like the sour to add a different lay of flavor.

The Fairy Tale Gooseberry Pie was our favorite dessert. Pie crust filled with Meringue and Gooseberry made the filling a nice mix of sweet and sour and the crust was flaky. While it was our favorite, we’ve had much better dessert elsewhere. 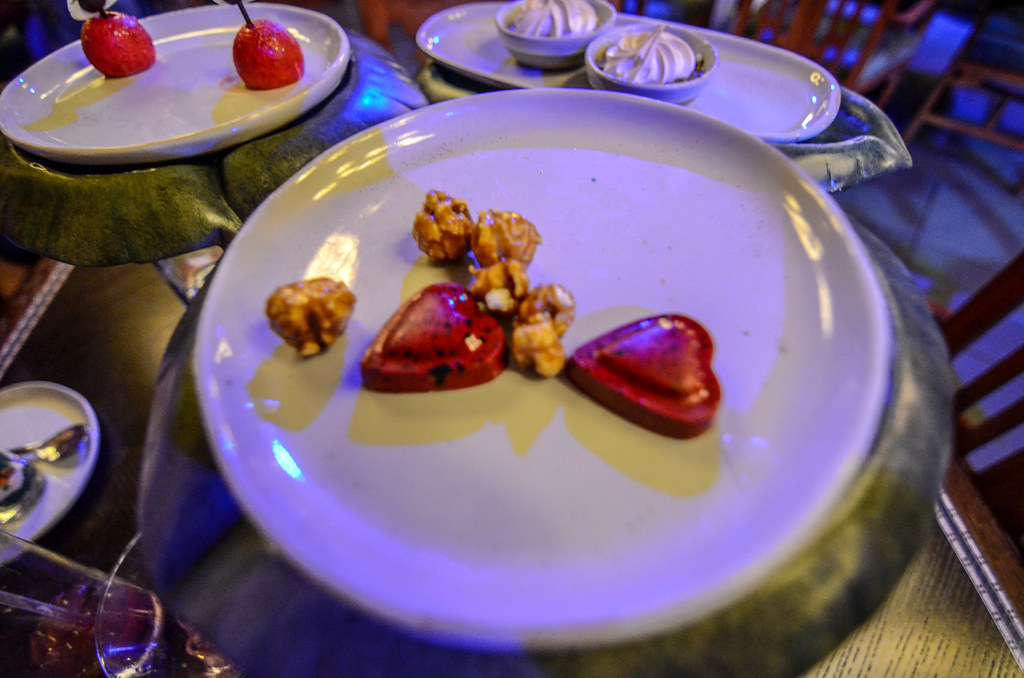 We also liked The Hunter’s Gift to the Queen, despite the ridiculous name. This is Maple Popcorn with Ganache Hearts. It’s a fairly interesting dessert and I really liked the Maple Popcorn. I could take or leave the hearts but mostly enjoyed the dessert.

Despite the average dessert, the meal as a whole was fantastic. Unfortunately, if you are paying out-of-pocket, the price matches the quality of the meal. Dining here costs $55 per person before any discount. Honestly, this is a fair price relative to all other character meals at Disney World. The price falls right in line with other experiences despite this experience being much better. Having said that, it’s still a very high price tag and I’m not sure you can call it a great value. 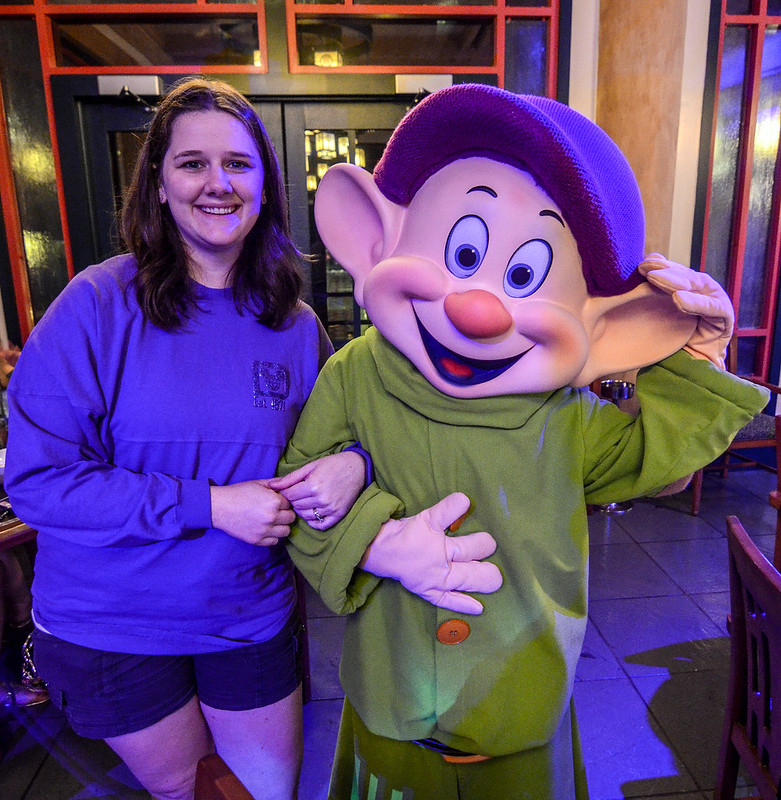 Storybook Dining at Artist Point does become a great value for those on the Disney Dining Plan. I’m still surprised that this meal is only 1-credit, not that I’m complaining. This is one of the best values on the Dining Plan in terms of money and quality of food. 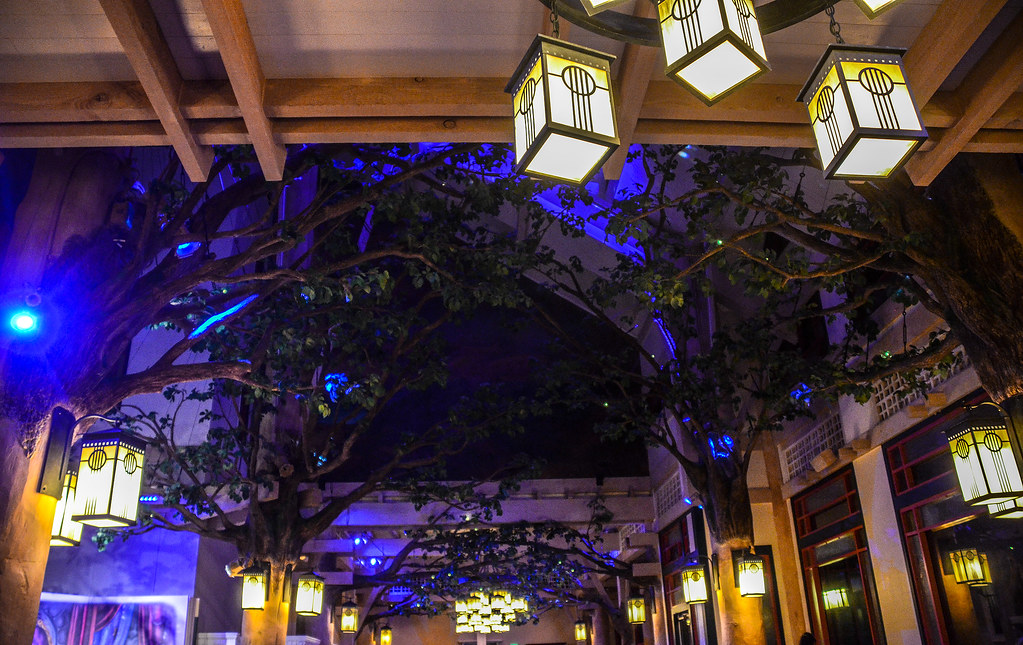 Have you tried Storybook Dining at Artist Point? Let us know your thoughts or any questions you might have in the comments below.  Planning a trip to Walt Disney World?  Check out our Disney World Trip Planning Guide to help you out.  If you enjoy what you are reading here on Wandering in Disney please share this post with your friends, as well as like our social media pages.  You can also subscribe to the blog via WordPress or email.  All of those links are on the right side of this page.  Thank you for reading, we really appreciate it!