Walt Disney World offers many expensive and seemingly lavish experiences.  On top of the standard vacation there are tours, extra events, dessert parties and many other things for guests to spend money on.  Regular readers know that I don’t endorse many of those things, as I don’t see much value in many of them.  There is one particular way to rope me into those expensive experiences though – food.  Well, not so much food as a unique experience that involves food.  We recently dined at California Grill’s Brunch at the Top and this review will cover that experience, including our thoughts and photos on the food as well as the overall value of the meal. 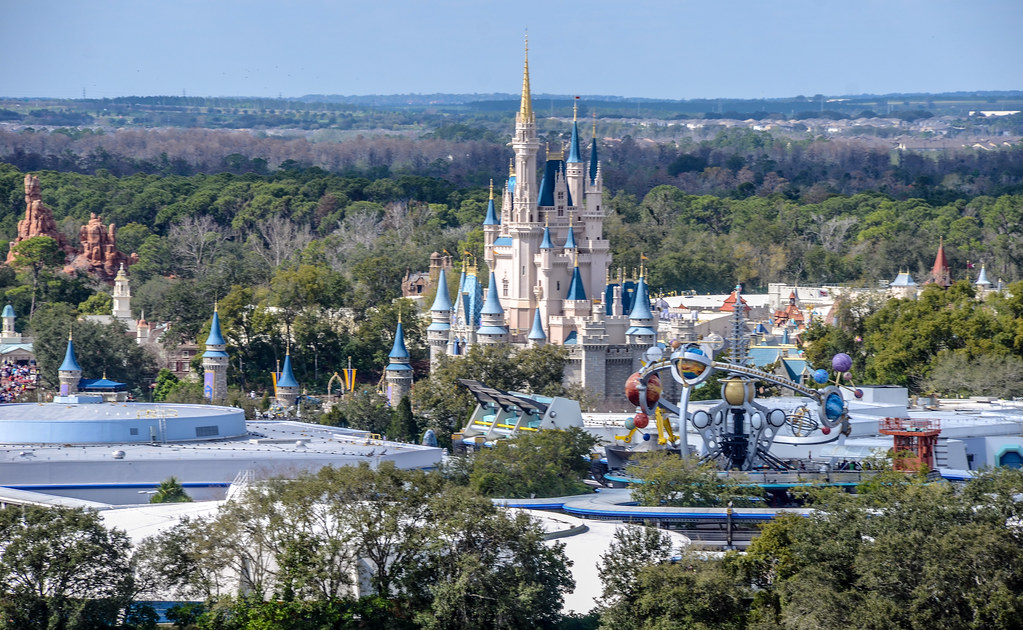 That’s not to say the dining experiences are the same.  Victoria & Albert’s is extremely fancy with decadent food and world-class service.  California Grill has a more relaxed setting with an all-you-can-eat meal while still keeping a level of sophistication.  It’s because of that difference, and the price difference, that California Grill’s Brunch rivals the Victoria & Albert’s. 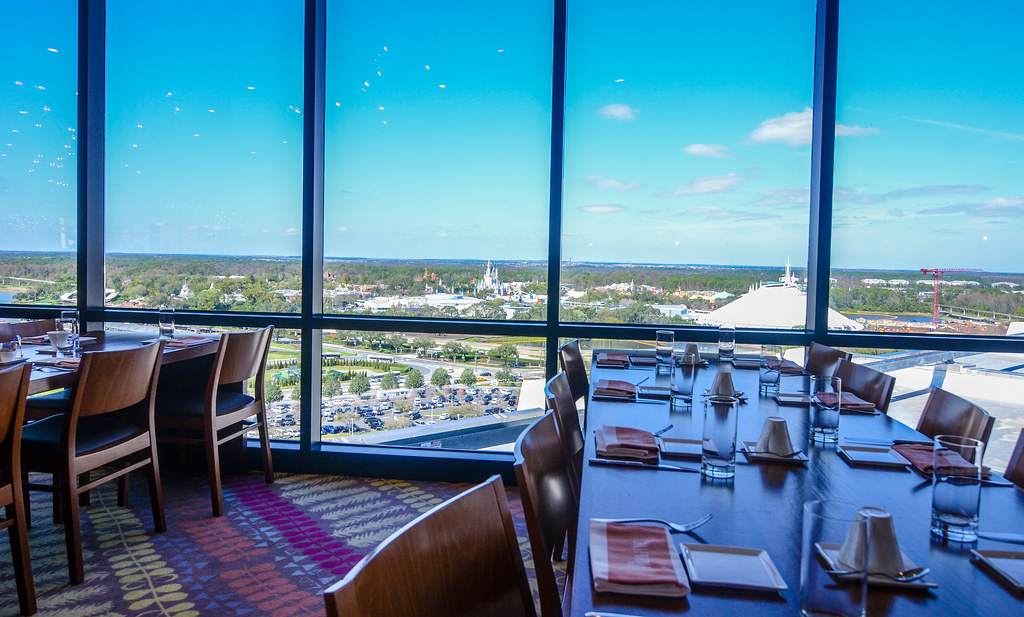 To go along with the stunning atmosphere, there is a stand-up bass and keyboardist playing live music at the brunch.  This adds to the relaxed setting.  They played a nice mix of jazz and Disney songs.  It does seem like they could have given them a little more space to perform though. 😉 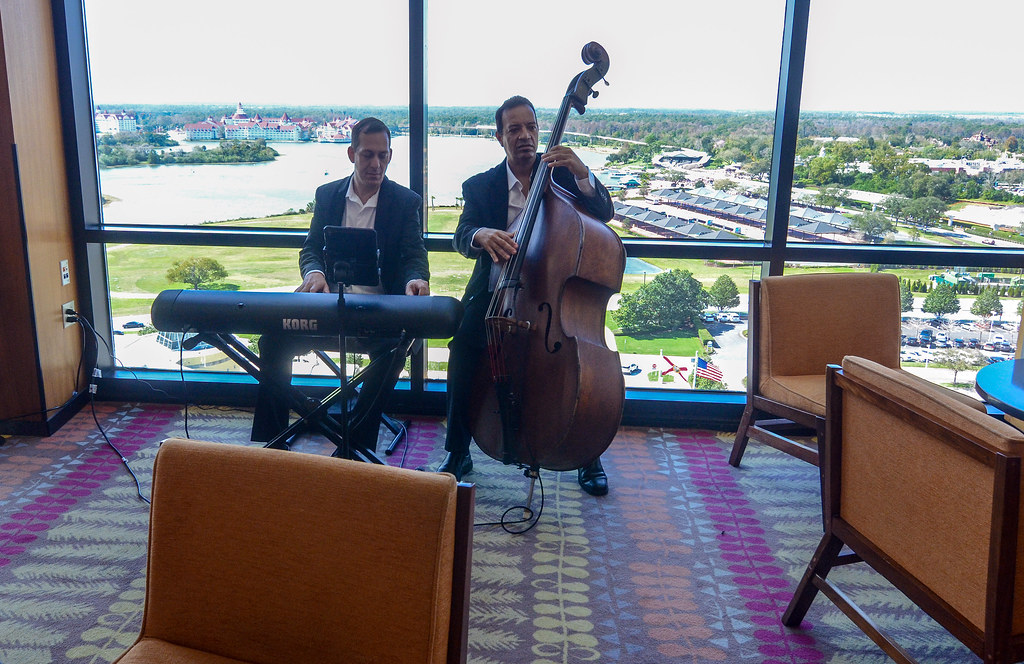 On the way to the table, we were handed Blueberry Mimosas (regular Mimosas are also available).  They are bottomless, so if you like Mimosas then the meal’s value is significantly higher.  I don’t love them, Melissa doesn’t like them at all, but I drank a few.  They were fairly strong for being a Disney drink and the fresh blueberries in them were a nice touch. 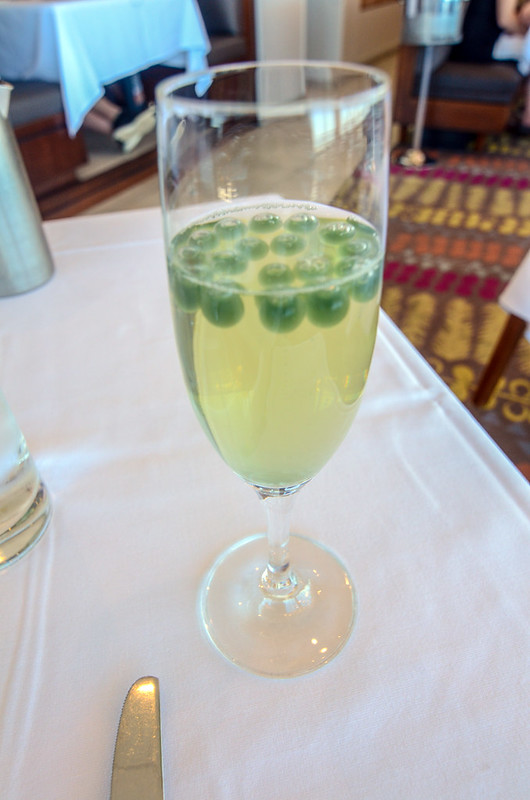 Tea, soft drinks and juice were also included in the price so you can have something else along with the Mimosas.  There’s also a Bloody Mary Bar, although that’s an additional cost. 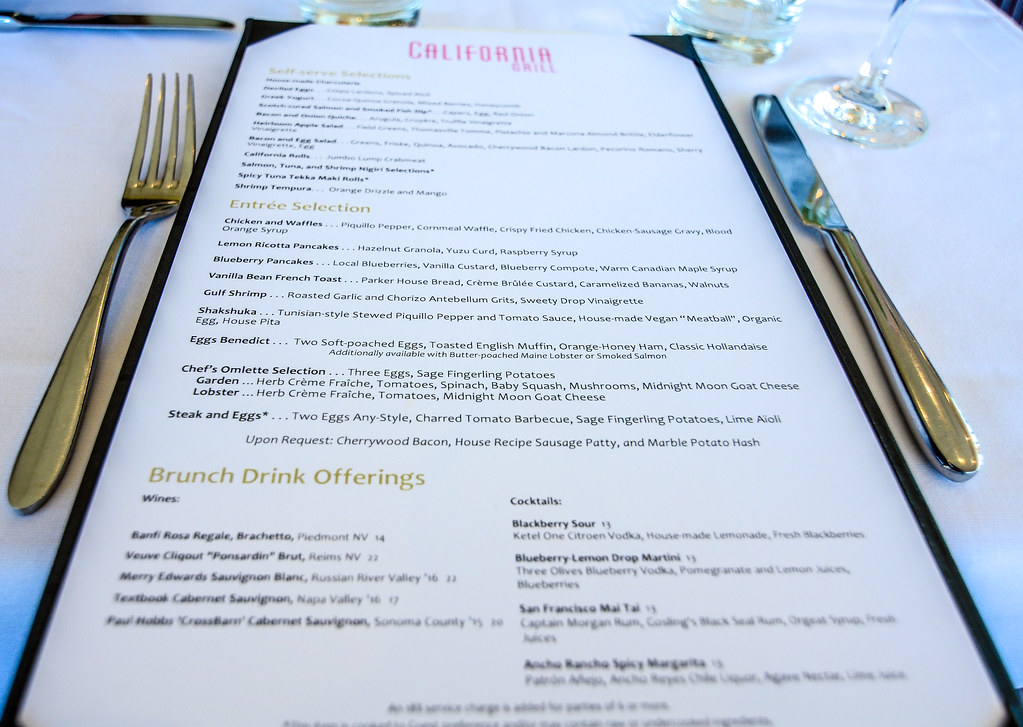 Once you sit down, there is a menu to gaze over.  This brunch includes an all-you-can-eat buffet as well as made to order entrees.  While it’s not really openly advertised, you can order more than one entrée if you want to.  If you go by yourself and order four entrees then that might be frowned upon but we ordered three between the two of us and had no problem.  The ones we didn’t order that caught my eye were the Gulf Shrimp and Blueberry Pancakes.  Gulf Shrimp looks like one of the more creative items on the menu, with a nod to southern cooking.  The Blueberry Pancakes just sound good to me.  We ended up ordering Lobster Eggs Benedict, Chicken and Waffles and Steak and Eggs for our entrees.

After ordering, it was off to the buffet that consisted (mainly) of pastries, Charcuterie, sushi and salads.  Let’s take a look at a few of my favorites. 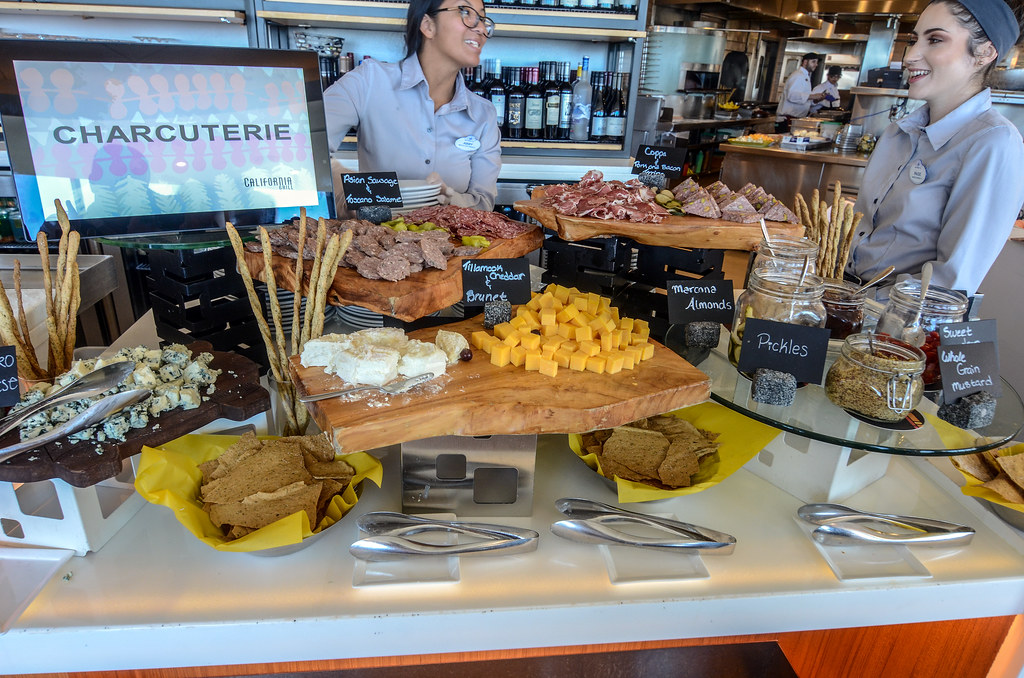 Generally, I’m not a huge fan of Charcuterie but this spread was impressive and all home-made.  I tried all of the meats and ended up liking the Coppa the best.  The Tillamook Cheddar was also a winner. 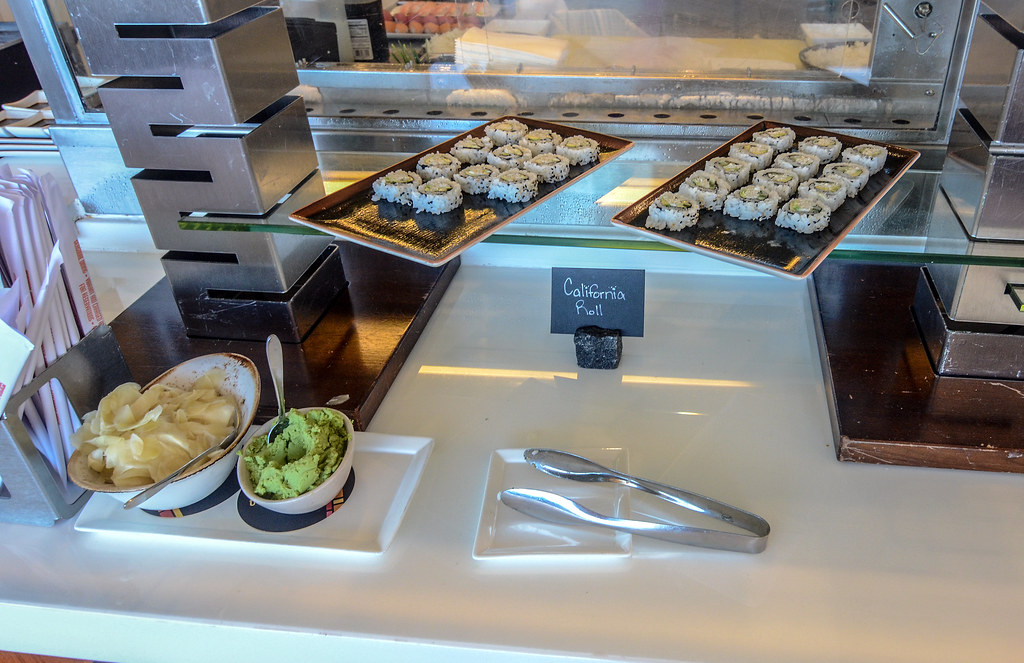 Moving on to the sushi, which California Grill also serves at dinner.  There were a few different rolls, starting with California Rolls.  The crab in these rolls was delicious and all of the ingredients were very fresh and rolled right in front of you.  Most buffets lead me to worrying about food sitting out for a while but that was far from the case here. 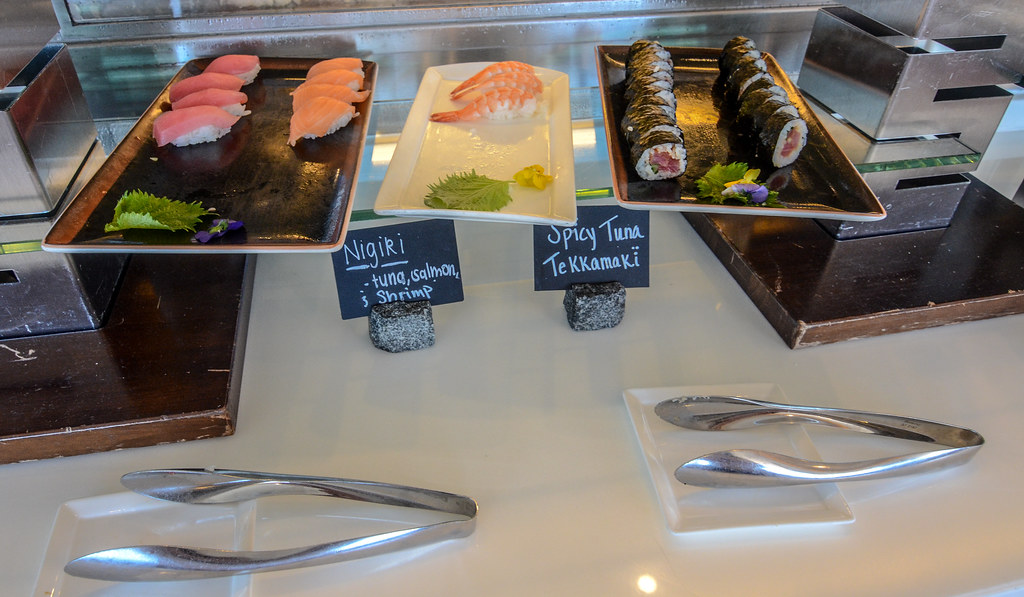 Moving on to the Nigiri and Spicy Tuna Rolls.  The latter was one of the best Spicy Tuna Rolls I’ve ever had although it’s admittedly not a favorite of mine.  I typically prefer Nigiri style sushi to rolls and that was the case here.  Each of the tuna, salmon and shrimp were incredibly fresh and full of flavor.  The cuts were fantastic and if there wasn’t so much to eat, I would have gone back several times for this. 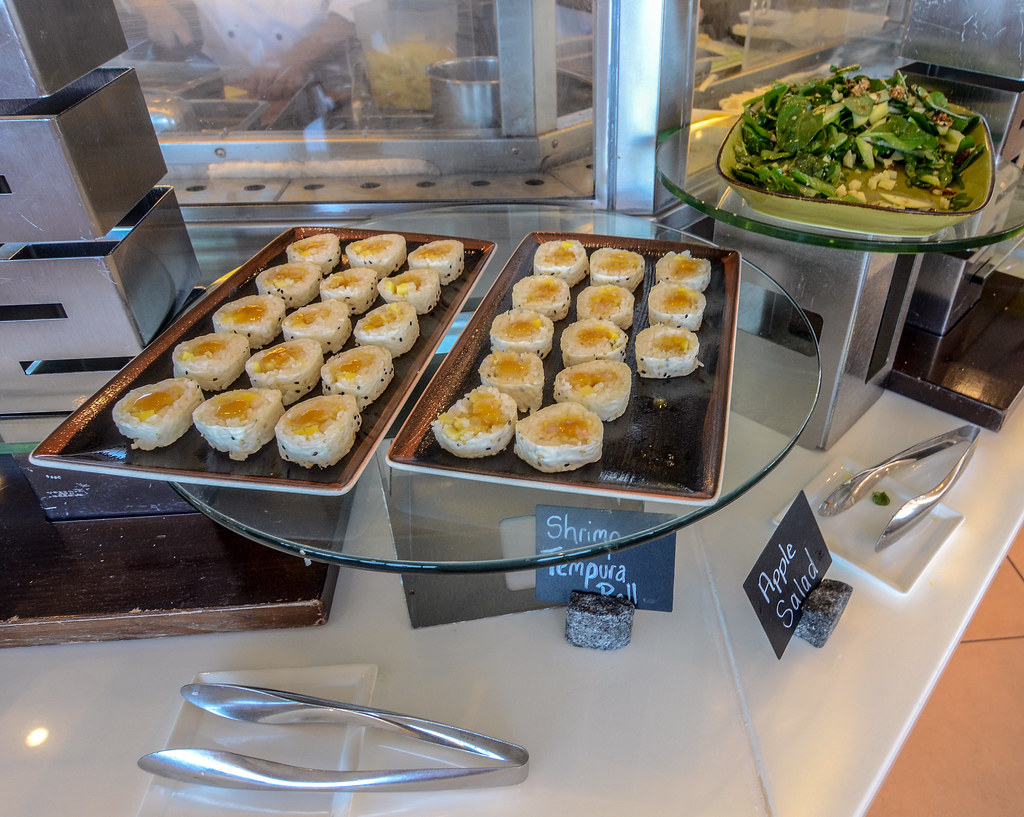 From there, the offerings became a little more tropical with a Shrimp Tempura Roll that had a sweet, fruity sauce that I enjoyed.  This was my least favorite of the sushi but still quite good.  The Apple Salad off to the side of this photo was delicious with fresh greens mixed with apples and a vinaigrette that was sweet and a little bit tart.  That was my favorite salad offered.  There were a few more salads on the buffet as well as yogurt parfaits and deviled eggs.  All of those options were solid but I preferred the sushi.

The pastries were also delicious, led by Baba Cake that was warmed up and served with Bourbon Ice Cream after you ordered it.  The cake was sweet with cinnamon and the pastry was the perfect amount of doughy.  It may have been the best item in the whole buffet which is really saying something. 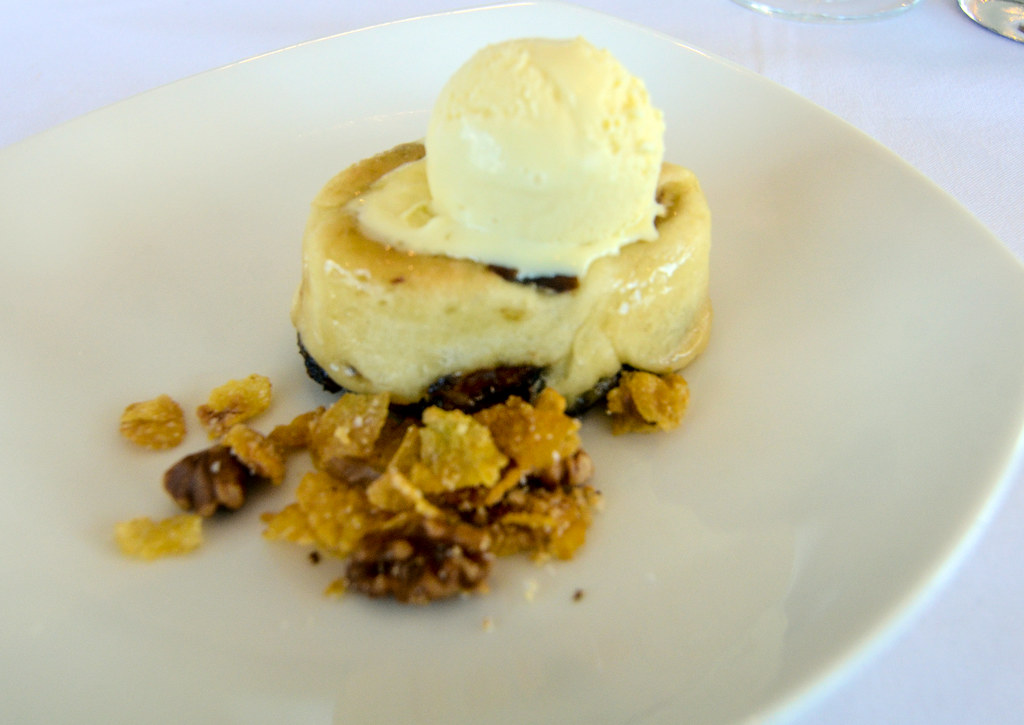 Moving on to the entrees, the Steak and Eggs was my favorite.  The steak was perfectly cooked with a Lime Aioli and Tomato Barbecue sauce on top.  It was one of the best entrees I’ve had at Disney World, the steak was excellent and I liked it even better than the one I’ve had for dinner here.  The eggs were also delicious and the potatoes were good.  Neither stood out but most of that was because it was hard to take the focus off the steak. 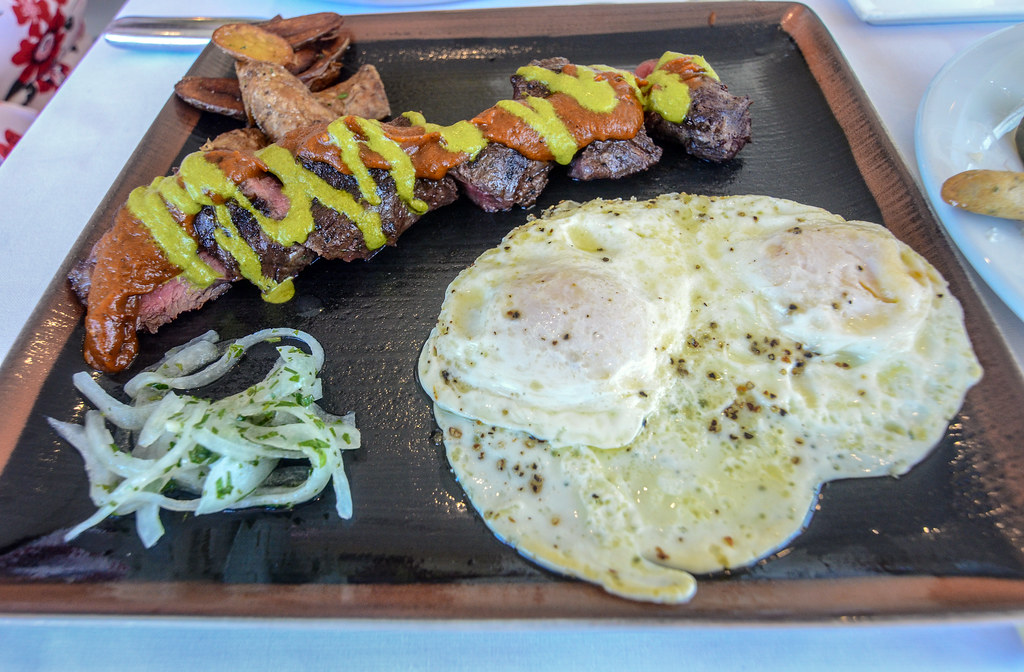 The Chicken and Waffles were similarly delicious.  The breading on the chicken had outstanding flavor that augmented the very juicy chicken inside.  Under the chicken was a cornmeal waffle with Piquillo Pepper on top that added quite a bit of heat.  The sausage gravy was fantastic and covered the whole dish, blending it all together.  My only complaint was that the dish was heavy so it was hard to eat more afterwards.  Not really a complaint, but I wanted to keep eating! 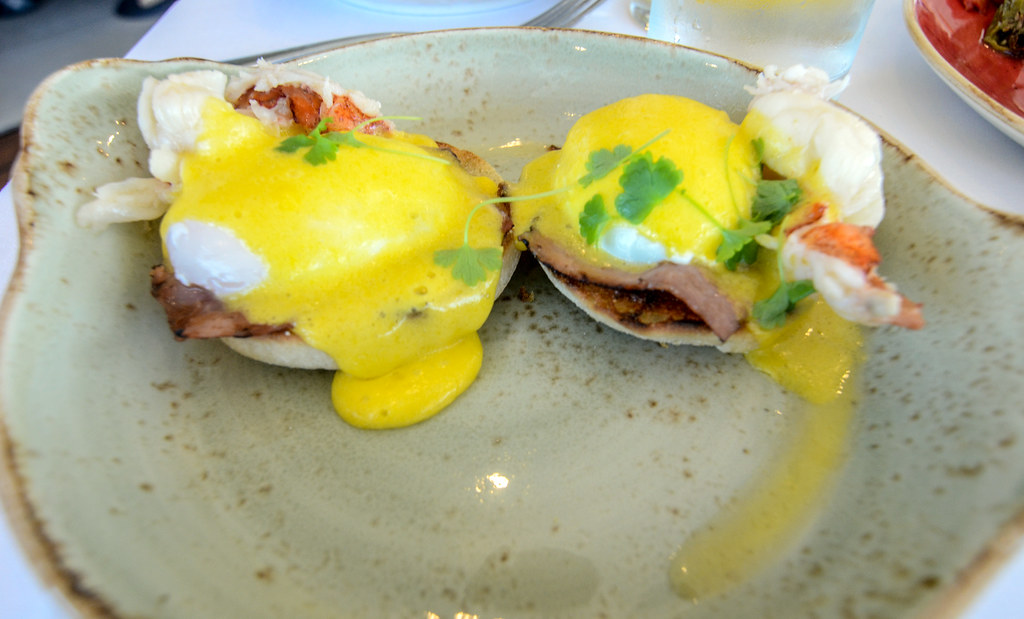 The Lobster Benedict was my least favorite entrée we tried but still exceptional.  The Lobster sat off to the side of the eggs benedict somewhat but still fit in with the dish’s flavors.  I was happy that the benedict still came with a piece of thinly sliced Orange-Honey Ham.  My favorite part of the dish was the Hollandaise Sauce that cut the rich flavors with a sweeter and lemony taste.  It’s a very good dish that would have been the star at any other brunch.

And so we carried on… To dessert! 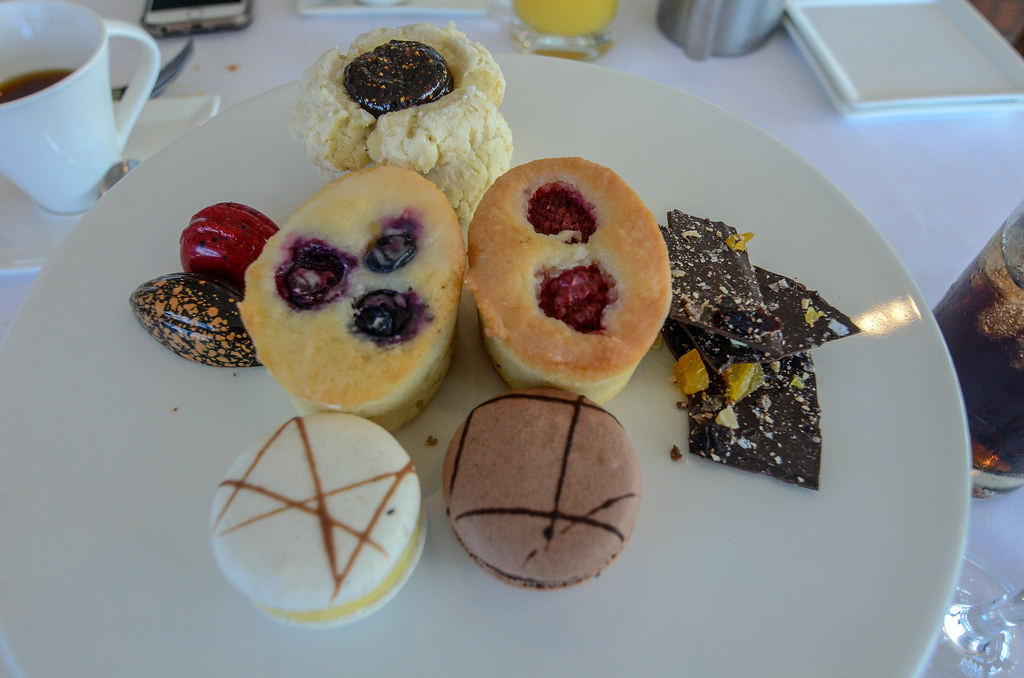 For dessert we were brought macaroons, cakes, and chocolates.  They were all delicious, although we were both too full to really enjoy them.  I liked the Blueberry Cake, Scone, and Chocolates the best.  Having said that, I think the Baba Cake were better than all of them.

Finally, we were done eating and went out to enjoy the observation deck.  It really is a beautiful view.  Guests who dined there for brunch are welcome back that evening to enjoy the Magic Kingdom fireworks if they want to. 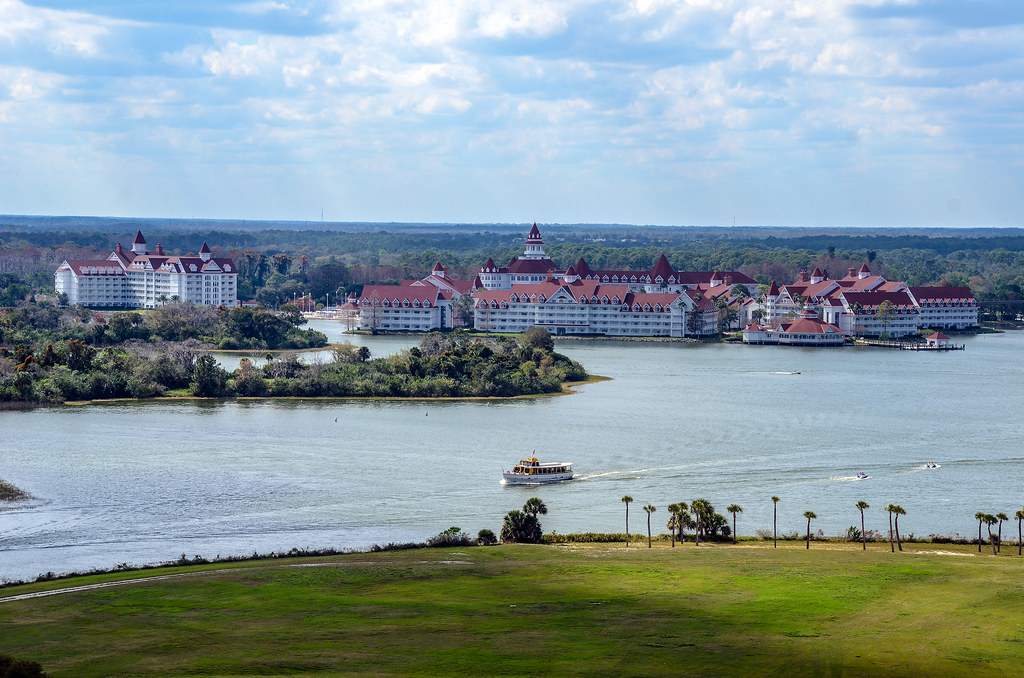 Overall, this is one of my favorite experiences in all of Disney World.  It’s one of the most relaxing things I’ve ever done at the resort that also mixes decadent food with hearty options.  The steak, sushi and chicken and waffles were excellent and the atmosphere was fantastic.  Unfortunately, the price is quite high.

Brunch at the Top costs $100 before any discounts.  When you factor in multiple Mimosas, all-you-can-eat sushi, multiple entrees, desserts, and an incredible atmosphere I think the price is actually fair relative to other Disney World dining experiences.  That’s not to say the price isn’t high, it definitely is.  It’s just not so high that it’s prohibitive like Victoria & Albert’s. 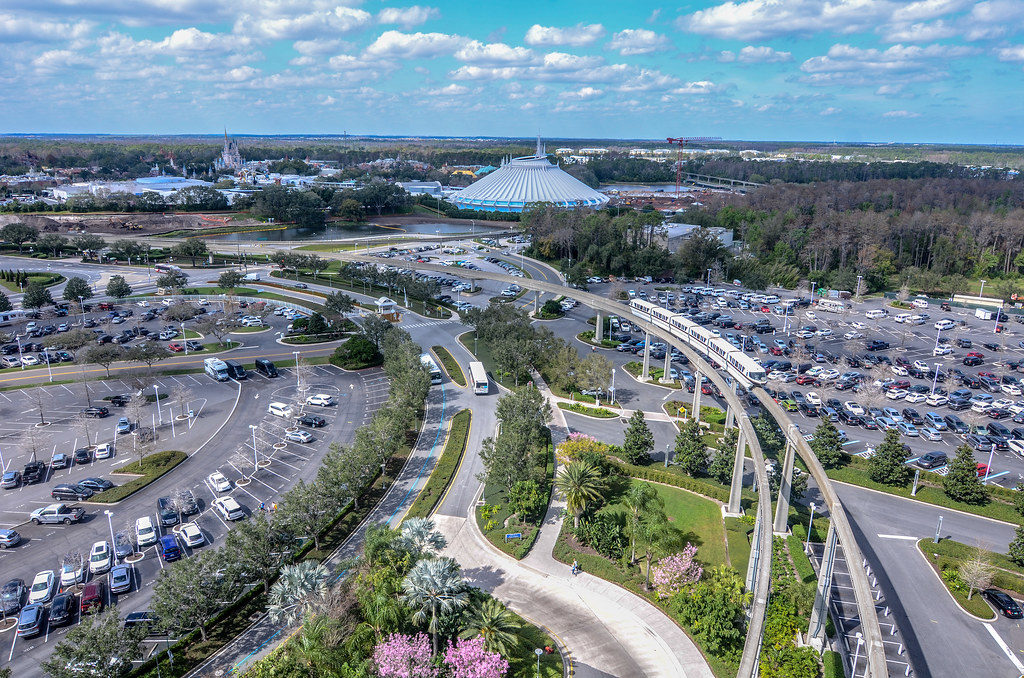 Ultimately, whether California Grill’s brunch is ‘worth it’ for you is whether you like sushi and Mimosas.  Having endless amounts of each is where you will find value, especially considering both of them are pretty expensive on their own.  If you don’t like either of them then I have a hard time justifying going to the brunch.  If you like one of those items then it’s a toss-up.  But, if you like both then this brunch is probably perfect for you.

If you are looking for a special dining experience, I couldn’t recommend California Grill’s Brunch at the Top enough.  The atmosphere isn’t topped in all of Disney World and the food backs it up.

Have you tried California Grill’s Brunch at the Top?  Let us know your thoughts or any questions you might have in the comments below!  Planning a trip to Walt Disney World?  Check out our Disney World Trip Planning Guide to help you out.  If you enjoy what you’re reading here on Wandering in Disney, you can subscribe to the blog via WordPress or email.  All of those links are on the right side of this page.  Thank you for reading, we really appreciate it!