Like the hotel it resides in, Intermission Food Court is not a thematic masterpiece.  It looks like… Well, it looks like a food court.  That’s not to say it looks bad, there just isn’t more to it than being a counter-service with a massive seating section. 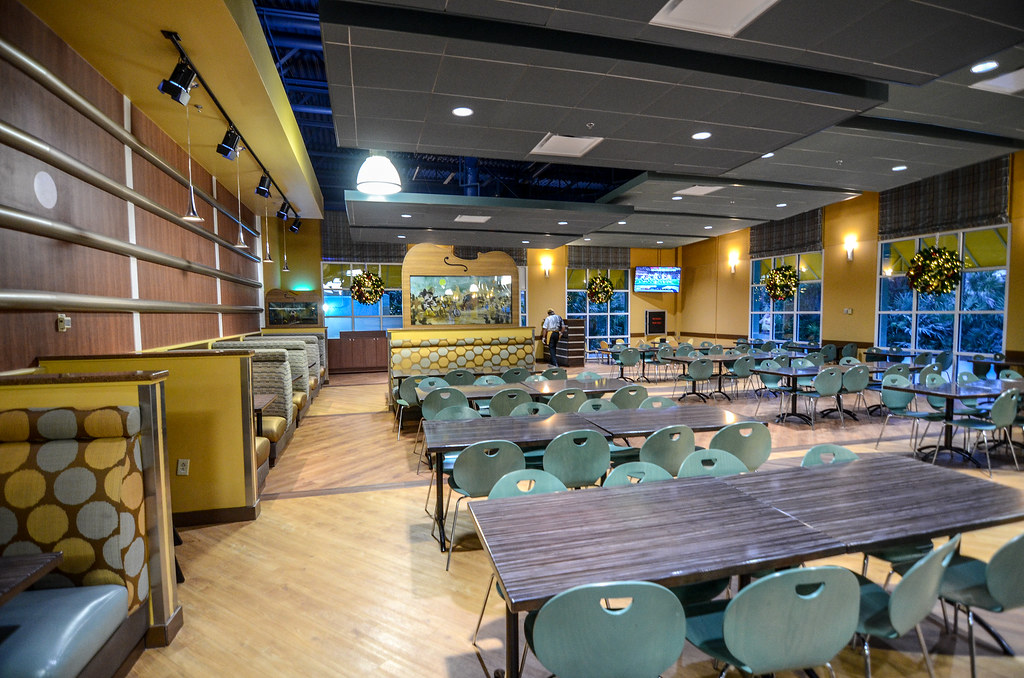 We were there during the Christmas season and the addition of some wreaths helped the otherwise bland area.  The booths add a little color, although I think they’re fairly ugly.  If you’re opening a restaurant and wondering if a brown, blue and yellow color scheme is the way to go then stop wondering.  It’s not.  I do like the light blue chairs and the tables are nice.  One other bonus is the amount of bigger tables within the food court.  This makes it easier for large groups to sit together.  For being such a massive section of seating (the photo above only shows roughly half of the seating) I was impressed with how clean the area was kept.  I can’t say whether it’s like this all the time or not but we were in there several times and it was always clean.

The ordering bays are at the entrance of the restaurant.  There are several counters that offer different types of food, as well as bakery and grab & go items.  Guests will grab their food from a counter along with any extra items they want and then proceed to the cashier to pay.  Right outside of that section are several drink stations with fountain drinks, tea, coffee, and a few other items.

On to the food, here’s a look at the Intermission Food Court menu.  Unfortunately, we were never there during regular dinner hours so I couldn’t try the specialty entrees.  The Seared Mahi is ambitious for a value resort menu and the Polenta Cake added a nice vegetarian option.  While I wasn’t able to try them, I think the specialty entrees for dinner would be the way to go. 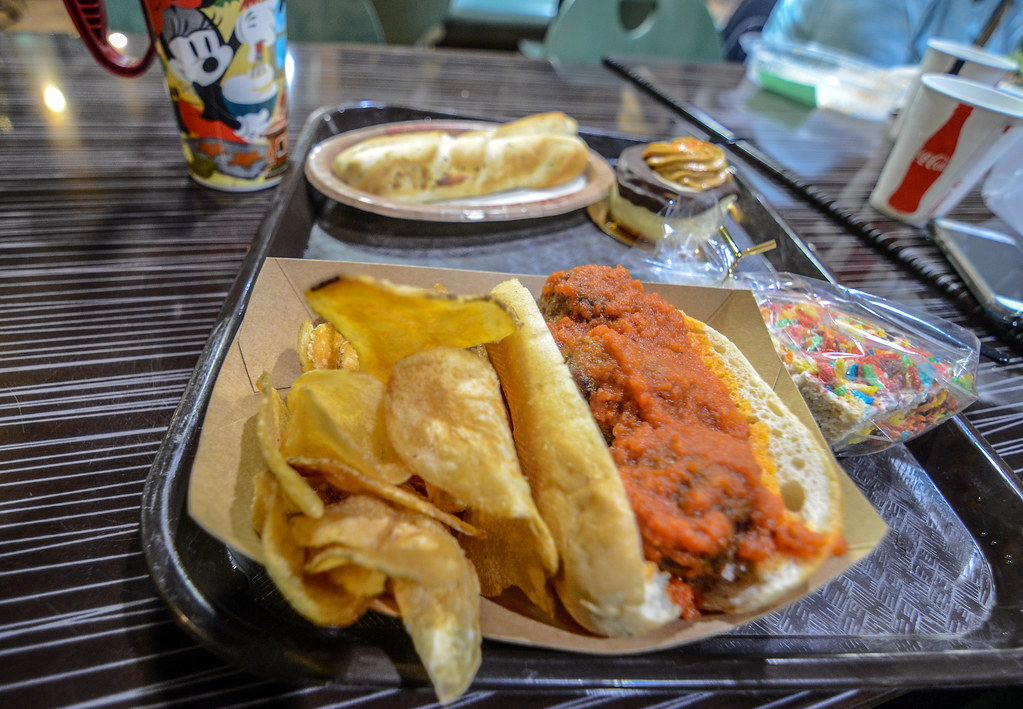 What was open when we went was the Grill & Pizza Shop.  We ordered several items from here, the first of which was the Meatball Sub.  This was a bit of a disappointment.  The bread was dry and forgettable in taste.  I’m a fan of even bad meatballs but these were just okay.  I thought the meat was fine but it was somewhat ruined by the excess of bad marinara sauces.  It was a fine Meatball Sub and I did enjoy the melted cheese with the meatballs (I’m a simple man) but I wouldn’t get it again.  The chips were also forgettable.  They weren’t very flavorful, although they were made at the restaurant.  I thought they were a little too hard, as well.  Still better than regular potato chips though.  At just over $10, this wasn’t an especially good value but it was fine relative to most of Disney World’s prices. 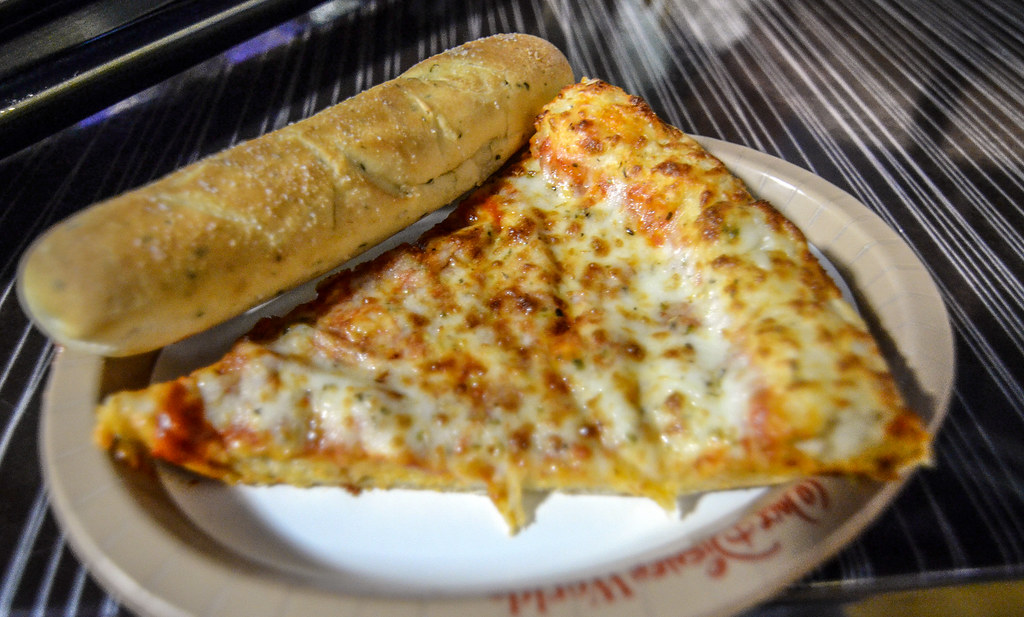 The pizza and breadstick were a much better option.  I was afraid the pizza would be closer to the frozen theme park pizza that Disney has slowly moved away from.  Instead this was a thick crust pizza made right in front of you.  While it could sit there for a while, depending on how busy the restaurant was, I think the pizzas were pretty fresh.  I wouldn’t call the piece perfect by any means.  It was very greasy and the cheese and marinara sauce were very average.  Still, it was cooked well and is better than many other pizzas I’ve tried at Walt Disney World.  The breadstick wasn’t great, this particular one was a little old and fairly bland.  As an add-on to the pizza though, it was fine.

Pizzas are also sold whole if your entire family wants them.  They’re fairly big pieces and a large cheese pizza is only $17.  All in all, that’s not a bad value.  Pizza is also sold very late while other options close down.  This makes for an easy midnight snack if you are staying late at the parks or bar hopping in Disney Springs. 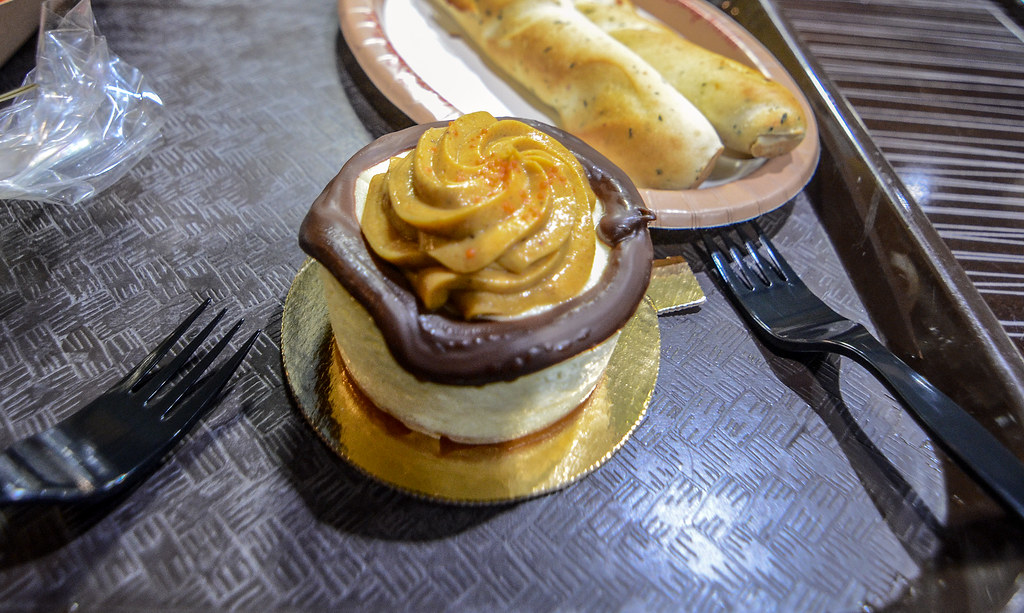 For dessert, we had Pumpkin Cheesecake and a Rice Crispy Treat with Fruity Pebbles on top.  The Pumpkin Cheesecake was probably a specialty item, as it was Thanksgiving.  The pumpkin icing on top was delicious, very rich and full of flavor.  Unfortunately, the cheesecake underneath didn’t keep up with the flavor and was very average.  The Rice Crispy Treat is a guilty pleasure of mine and was completely over-the-top in terms of sweetness.  That doesn’t mean I didn’t enjoy it though!  I just had a big of a sugar rush to go with it.  Overall, the desserts were decent but I wouldn’t go out of my way to try either.

In terms of value, Intermission Food Court essentially falls in line with most Disney World counter-service options.  There’s no amazing deal you’ll find here (although the whole pizza isn’t bad) but the prices aren’t high relative to other Disney restaurants either.

Overall, Intermission Food Court is a decent option for those staying at All Star Music Resort.  There’s enough variety in the menu mixed in with decent prices to make this a fine counter-service restaurant.  For those staying outside of the resort, I wouldn’t make a special trip. 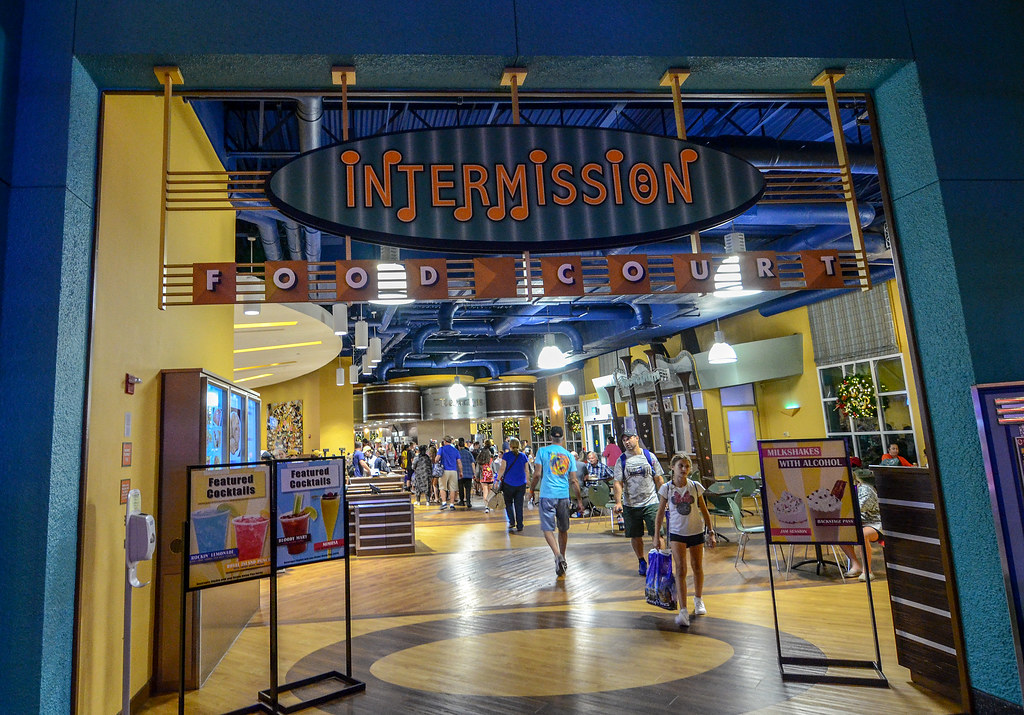 Have you tried Intermission Food Court?  Let us know your thoughts or questions in the comments.  Planning a trip to Walt Disney World?  Check out our Disney World Trip Planning Guide to help you out.  If you enjoy what you’re reading here on Wandering in Disney, you can subscribe to the blog via WordPress or email.  All of those links are on the right side of this page.  Thank you for reading, we really appreciate it!