Pizza Ponte is a counter-service restaurant in Walt Disney World’s Disney Springs that serves pizza, sandwiches, and a variety of pastries and desserts.  The restaurant is attached to Maria & Enzo’s Ristorante in The Landing section of Disney Springs.  We recently dined at Pizza Ponte and this review will cover our thoughts on that experience including photos of the food and if it’s worth a visit.

Theme park pizza has a negative connotation.  If you read “theme park pizza” and immediately got a bad taste in your mouth that could be likened to cardboard then you aren’t alone!  Pizzafari, PizzeRizzo, Boardwalk Pizza Window, and whatever Magic Kingdom calls pizza are just a few of the unsatisfying examples of what many perceive as ‘theme park pizza’.  Of course, there are those that like that sort of thing.  Maybe it takes guests back to pizza day in the school cafeteria, where cardboard flavored pizza tasted quite a bit better than the mystery meat they served every Tuesday.  Maybe it’s just a guilty pleasure thing, where every once in a while loading up on a greasy slice does taste decent.  For me, it’s the latter.

Pizza Ponte, although just outside of a theme park, has a different spin on theme park pizza.  Yes, it’s still pretty greasy and would be appealing to those that have had a few drinks throughout the day or night.  Where Pizza Ponte differs is that the pizza is fresh and, instead of tasting like cardboard, actually tastes delicious.

As a whole, Disney Springs restaurants don’t shoot for theme or story in their restaurants as much as the ones in the theme parks or resorts.  There are exceptions, but this certainly holds true at Pizza Ponte.  The building is actually somewhat hard to find because it is so unassuming.  We stopped by later in the evening and there was no light up signage, just a lit up menu.  Part of this is because Maria & Enzo’s receives most of the signage for the building. 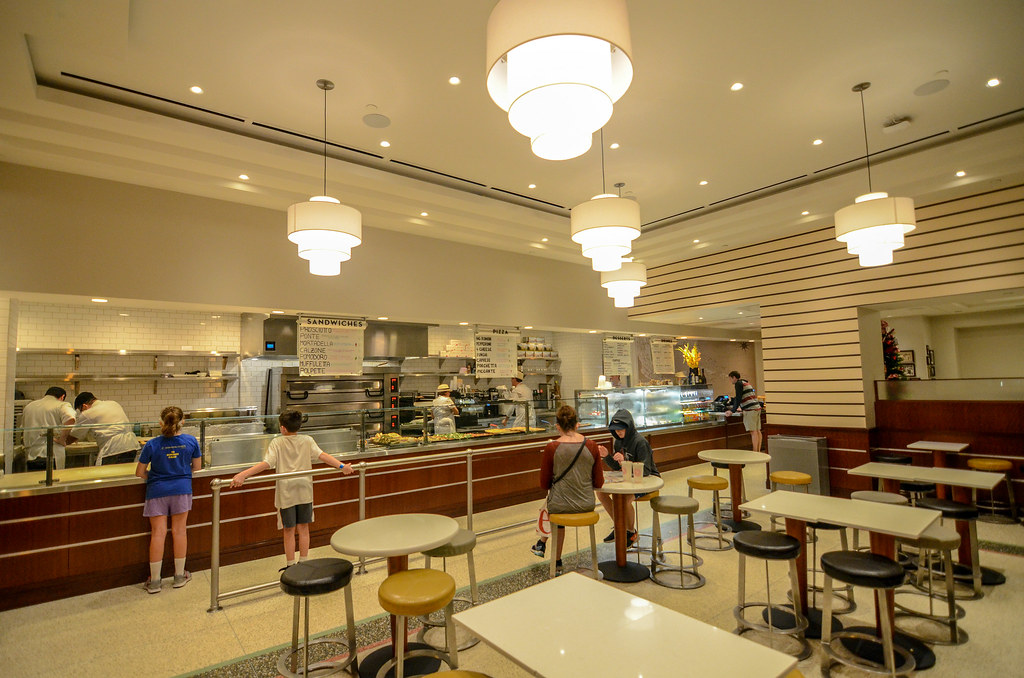 The inside of the restaurant isn’t much either, as you can tell.  Pizza Ponte is fairly bright and has an ordering counter.  I do like the deep red in the color scheme and overall I found the place aesthetically pleasing.  No one should be coming here for the environment though.  There also isn’t much seating throughout the restaurant.  We were there late, but I wouldn’t be surprised if the place gets fairly busy during meal hours. 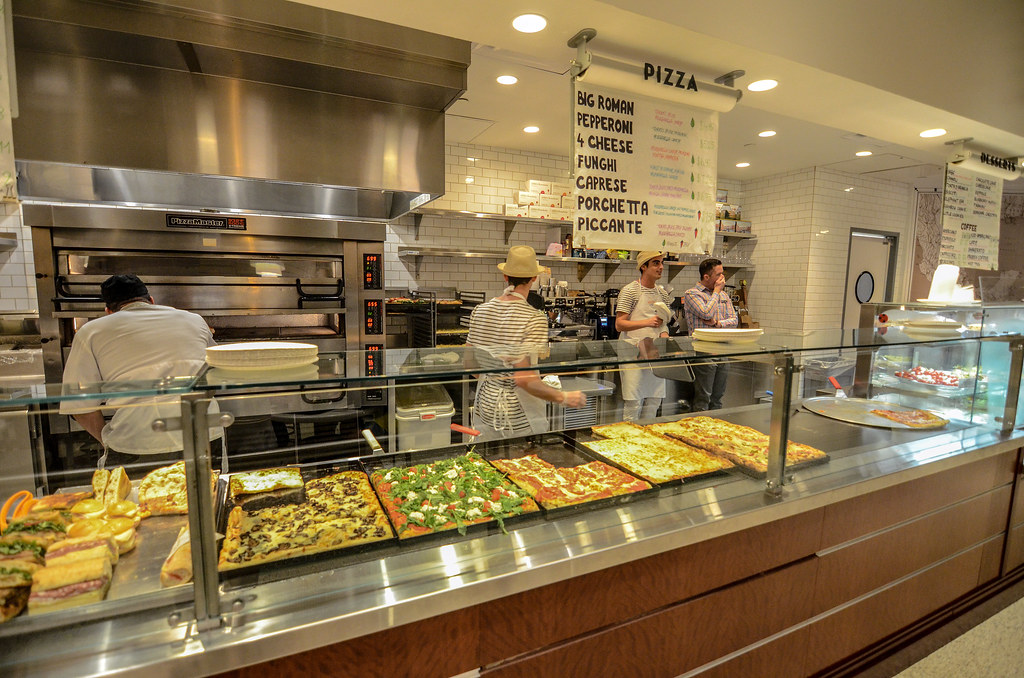 I do like the counter and open kitchen.  While the pizza is sitting out, the ovens are close by and seemed to be in heavy use even at our late arrival hour so I would expect most slices would taste fresh.  As you can see, the pizza is cooked (and served) in squares.  Here’s a look at the menu. 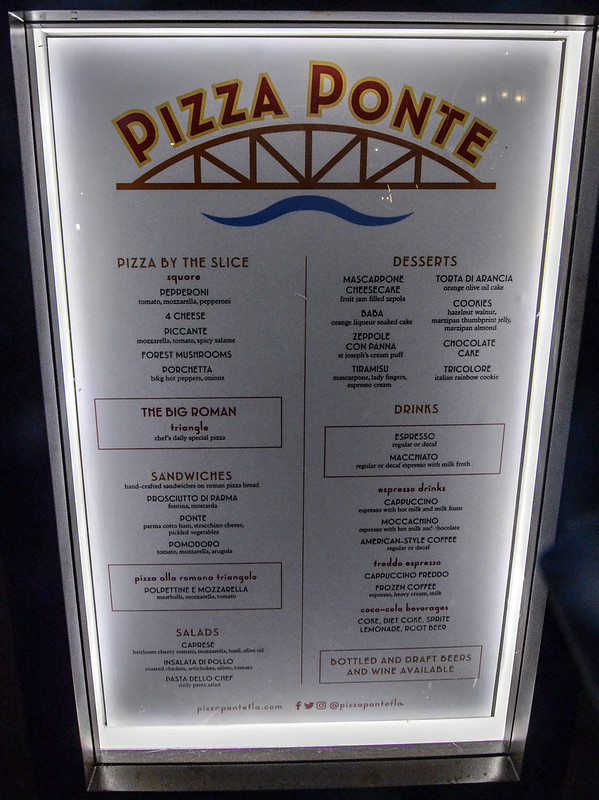 I didn’t photograph everything but trust me when I say that it all looked good.  The sandwiches all looked interesting and large.  They were also only $9, which looked like a fair value going by the eye test.  The desserts similarly looked delicious and I would have been happy ordering any of them.  I’ll have to go back for the Mascarpone Cheesecake.  All pizza slices were $7, sandwiches were $9 (the Muffuletta was $11), desserts were all $7 or below and the fairly extensive coffee offerings were all $4 or less.

Pizza Ponte did strive to have more of an Italian style menu than typical American pizza places.  The aforementioned coffee and dessert options were examples of this.  While I don’t think of this as a place you’d find on a street in Venice, the menu might be closer to that than it is to the local Domino’s. 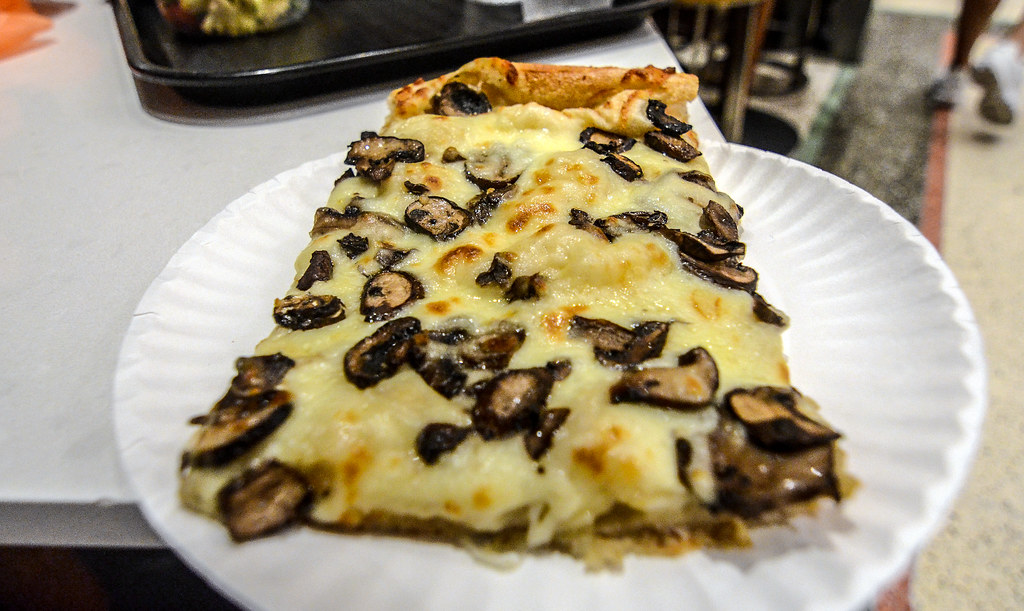 I went with the Forest Mushroom slice of pizza.  As you can see, these slices are pretty hefty and there’s no shortage of cheese on there.  You may judge me for this statement but here it goes, it had the right amount of grease on it.  While it certainly wasn’t healthy (except for all of those mushrooms!) it never crossed the line into making me feel bad while eating it.  That doesn’t read as high praise but I do mean it, as most inexpensive chain restaurant pizzas make me feel gross.  I was impressed by the amount of mushrooms on the slice and the crust was delicious, thick but not overpowering to the rest of the flavors. 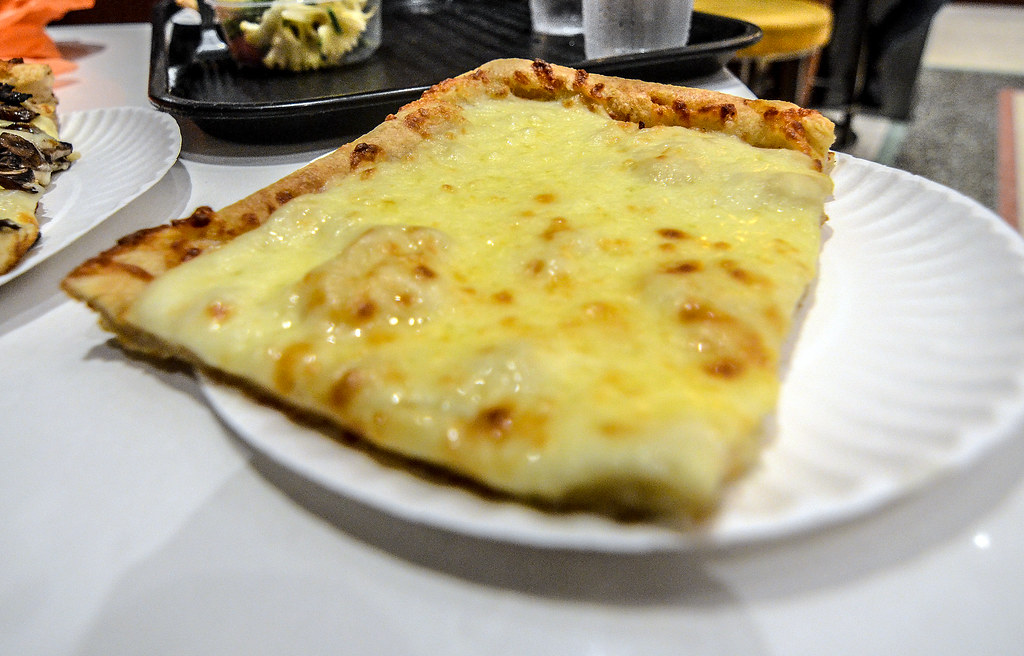 Melissa had the 4-cheese pizza which was the only one that came in a standard triangle pizza slice.  While delicious, this option was incredibly rich and very filling.  I liked the crust on the Forest Mushroom more but she disagreed.  Both slices were full of flavor that tasted fresh.  I definitely couldn’t have done a full slice of the 4-cheese though. 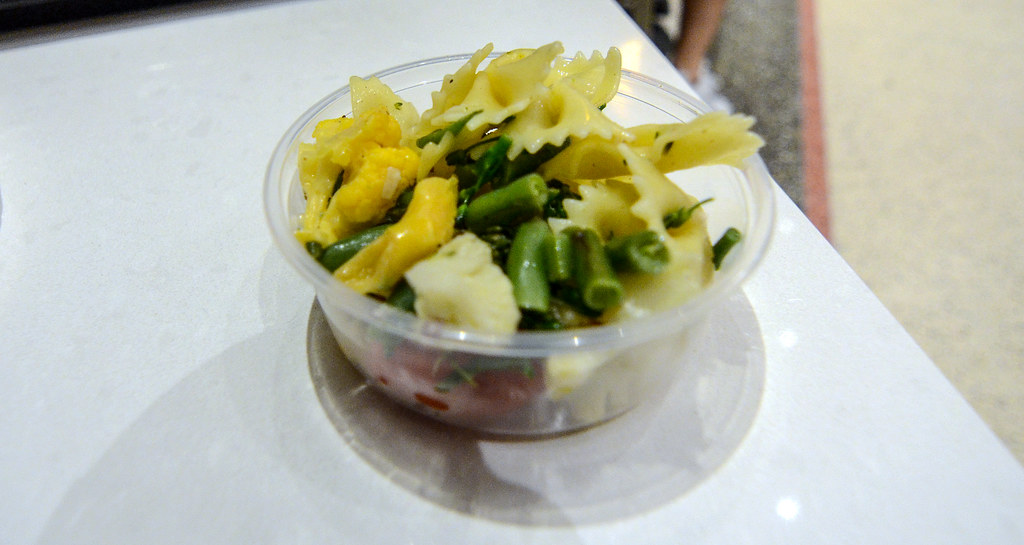 I ordered the pasta salad as a side and enjoyed it.  There was a unique array of vegetables in this, although they all worked well together.  I especially enjoyed the cauliflower and asparagus.  The dressing wasn’t overpowering but did add a nice tang.  While I wouldn’t consider this great, I’d be happy to order it again with the price under $5. 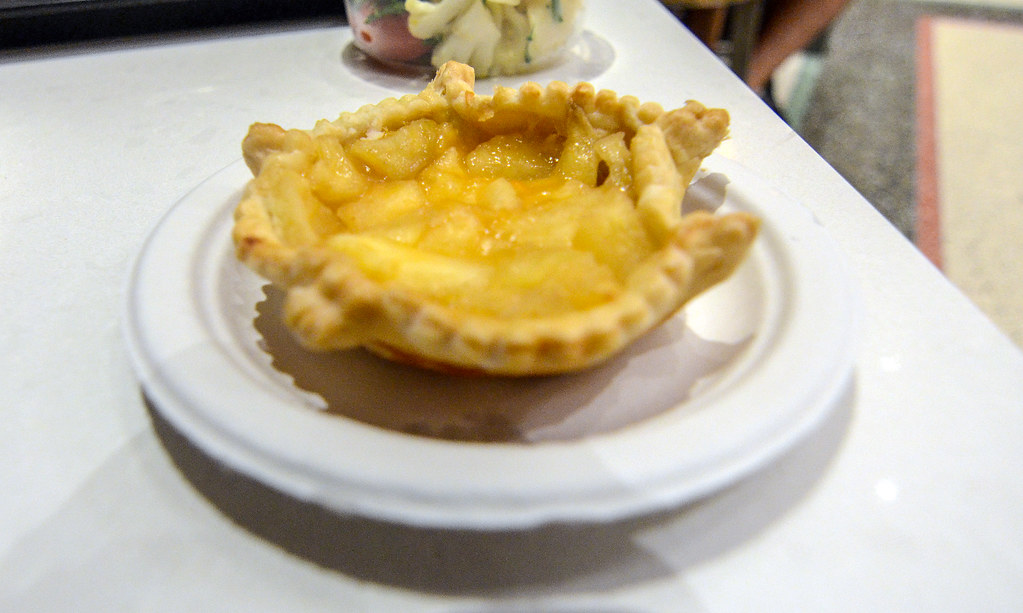 For dessert we had an apple tart (I don’t recall what it was called on the menu exactly).  We both liked it but I do think other options on the menu may be better.  Melissa and I agreed that we would have liked this option more warmed up.  The crust was soft and the filling was delicious with a nice mix of apples, cinnamon and glaze.  A solid option but, judging from what else I saw in the dessert case, not one that I’m rushing back for.

Pizza Ponte is a perfect restaurant for those that stay out late in the parks and need late dinner or snack to share.  The slices are quite filling, making this appealing for those that are bar hopping.  On top of that, Pizza Ponte offers a strong value to those paying out-of-pocket (Disney Dining Plan is accepted but isn’t a great value).  We had 2 slices of pizza, a side and a dessert for under $25.  That’s a rarity in Disney World, especially considering all of what we tried was delicious.  While Pizza Ponte isn’t breaking new culinary ground and the atmosphere is generic, it may be our new favorite Disney World late night spot when we need a bite to eat.

Have you been to Pizza Ponte? Let us know your thoughts or any questions you might have in the comments below.  Planning a trip to Walt Disney World?  Check out our Disney World Trip Planning Guide to help you out.  If you enjoy what you are reading here on Wandering in Disney please share this post with your friends, as well as like our social media pages.  You can also subscribe to the blog via WordPress or email.  All of those links are on the right side of this page.  Thank you for reading, we really appreciate it!