Tokyo Disney Resort’s snacks have taken on a folklore the likes of Dole Whip and Mickey Ears.  Photos of these snacks have floated around the internet for years.  The fandom at Tokyo Disney Resort is character crazy and that doesn’t just stop with extreme lines for meet and greets.  This stretches from the merchandise, to the parades and even to the food.  Mochi that looks like the little green aliens from Toy Story, bread shaped like Mickey Mouse or treats that look like Sinbad’s sidekick, Chandu each try to break the internet with their cuteness.

Fortunately, all of these snacks have more going for them then simply being cute.  Food from a foreign country adds to the intrigue of these snacks. There are many intriguing options and never enough time to try them all.  As if catching up to all of the snacks wasn’t hard enough, Tokyo Disney Resort regularly changes out menus to make way for seasonal items.  Generally the classic snacks remain though (and they do a good job of keeping their website up to date if you feel comfortable navigating the Tokyo Disney site) so you don’t have to worry much about favorites being gone.

I must admit that I’m not much of a snacker.  I do a good amount of eating but it’s mostly during meals instead of through out the day.  Even at Disneyland and Disney World I don’t snack often outside of a few favorites.  Frankly, I find reviewing meals is far more useful to people than individual snacks.  But knowing that Tokyo Disney Resort excels in snacks changed our touring plan a bit while we were there.  We typically shared our counter-service meals and had a snack or two each day on top of that.  I’m glad we did it and this post is a fruit of that (incredibly rigorous) labor.

By my count, Melissa and I tried nine snacks once inside the parks.  While it’s a respectable number I’m a little ashamed that I didn’t do better research for you, our loyal reader.  To be fair, if we included the snacks we had at the convenience stores before heading into our out of the parks then the number would be embarrassing.  I’ve ranked all of the snacks we tried from worst to first in the list below.  All of them are still available aside from what’s in the number 2 slot and that will likely be back after the summer months.  I didn’t include drinks but Tokyo Disney Resort does offer some fun and interesting ones.  Let’s get to the list! 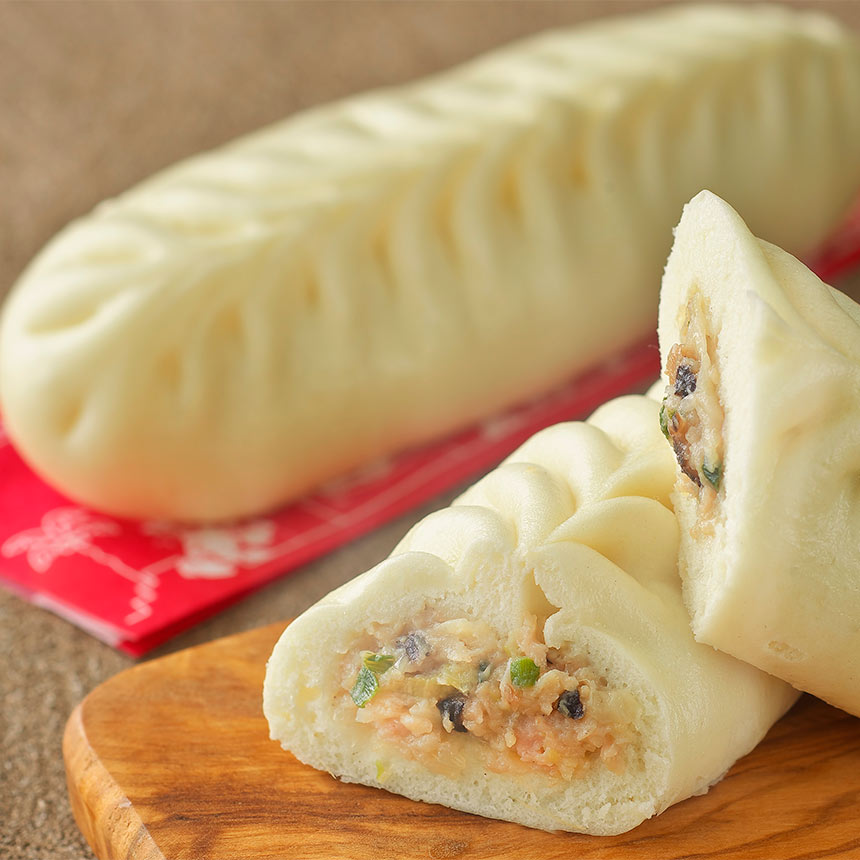 My only regret as far as snacks go.  The Gyoza Dog, found in Mysterious Island, was the most confusing snack I tried in terms of flavor.  While there is plenty of gyoza (between the dough and filling), I’m not sure where the ‘dog’ comes from in this instance.  If I had to guess it is either because it’s in the shape of a hot dog or because of the sausage inside of the gyoza.  The bread is much thicker than typical gyoza and I wasn’t a big fan of the filling.  I don’t think it’s a bad snack but more just not made for me. 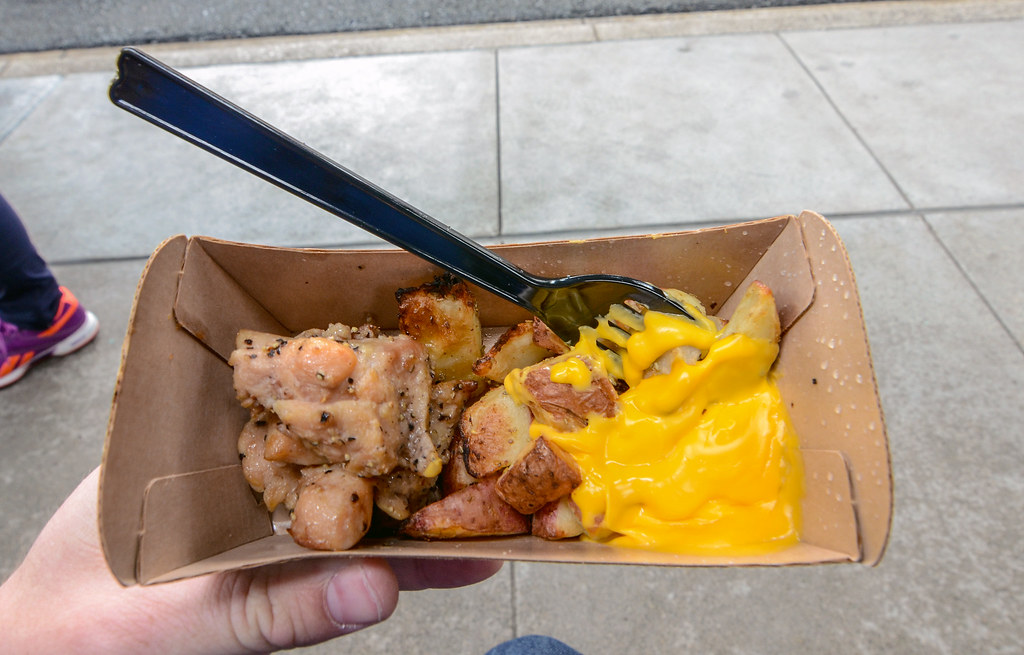 I should say that many of these snack names are taken straight from Google Translate.  In this case, the translation exactly matches what the dish was.  Found in the American Waterfront, this dish had chicken, which was juicy and flavorful.  And then there were potatoes and (nacho) cheese, which were decent but a little soggy and bland.  This was a decent savory snack and we got this as it was raining so it helped warm us up.  Overall, I don’t think I’d get it again but it’s a decent option. 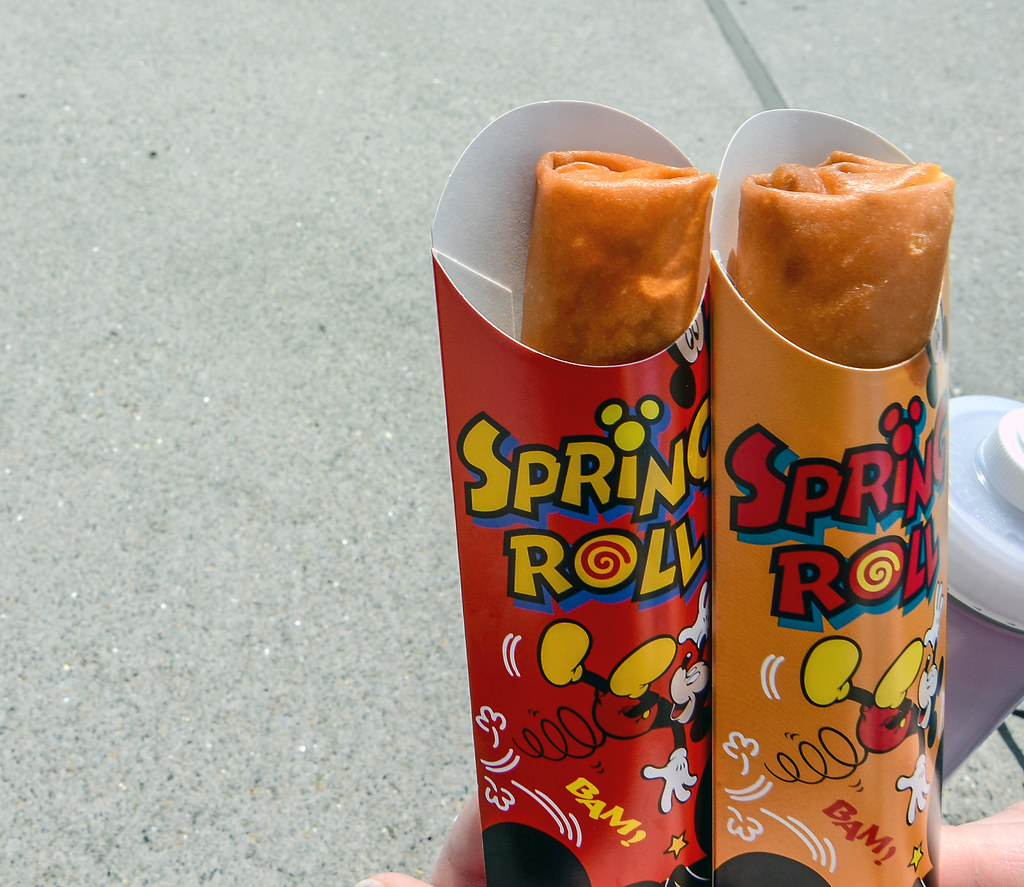 There’s a pretty big jump between 8th and 7th place.  In Toontown, these spring rolls were quite good.  One is filled with shrimp and egg while the other is pizza filled.  Melissa and I both liked the shrimp and egg option better.  The flavor was more of a typical spring roll and had an abundance of flavor, with a nice crispness on the outside.  I liked the Pizza Spring Roll as well but thought the tomato sauce was a little overpowering.

6. Popcorn (All over the place) 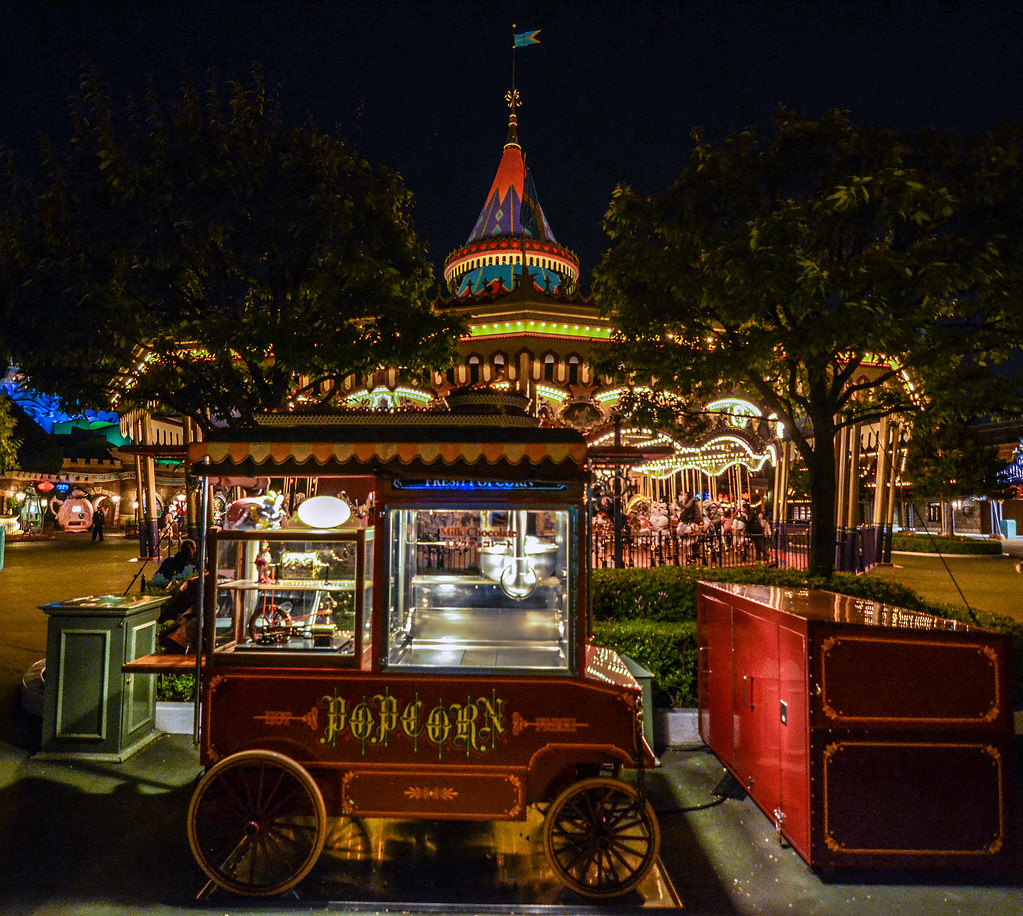 Tokyo Disney is known for bunches of popcorn flavors and long lines to get it.  One of our friends loves popcorn and tried many of the flavors there.  I enjoyed a few of them, my favorite was blueberry, but overall don’t think they quite live up to hype.  If you love popcorn, this is some of the best.  If you are like me and think popcorn is fine, then this is a nice treat but not nearly as good as other snacks. 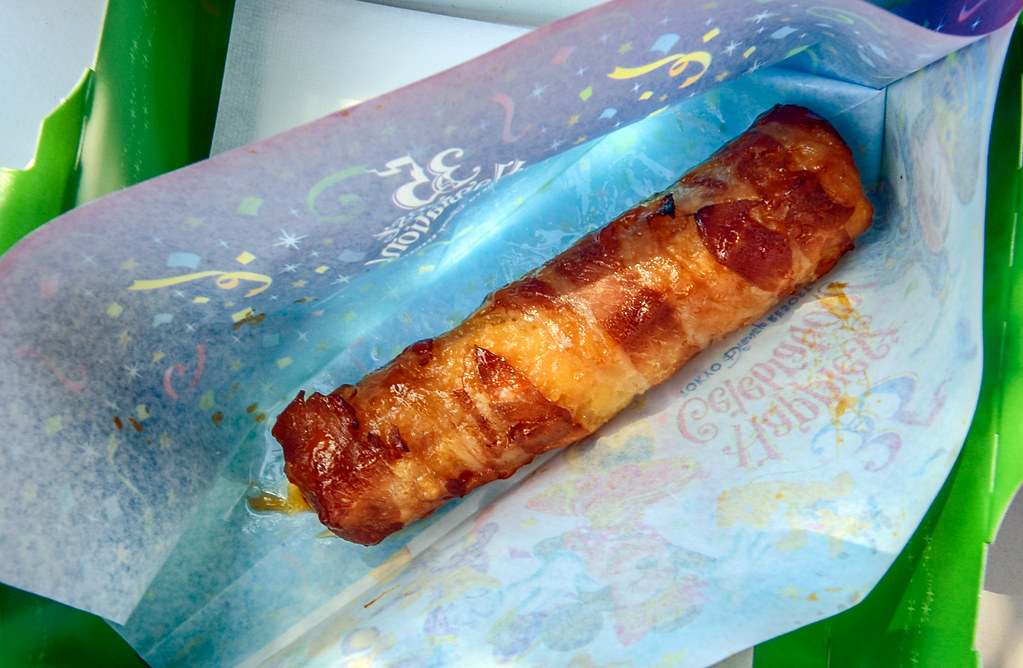 This was Melissa’s favorite snack of the trip and I enjoyed it as well.  I believe this can be found in Tokyo DisneySea, as well.  Think of this as an egg roll in texture but with a thicker outside layer with some bacon mixed in.  The filling is mostly rice with a little bit of pork.  The Pork Rice Roll is juicy and an easy introduction to some unfamiliar snacks throughout the resort. 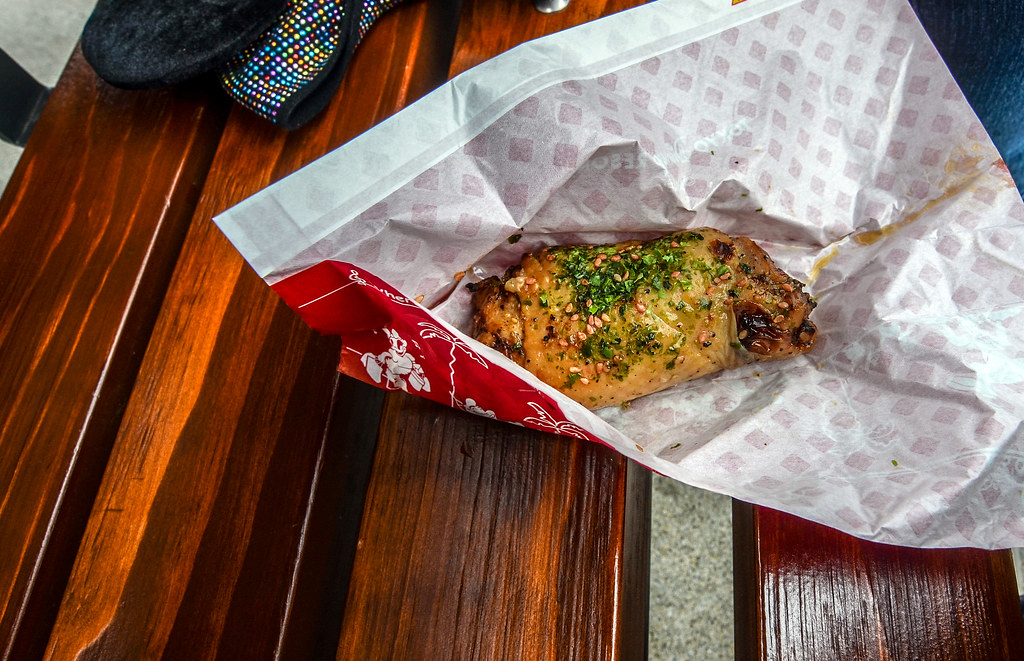 This was another juicy roll with delicious teriyaki chicken on the inside.  The roll was very messy and sticky but the flavors here were great.  There was a little bit of spice inside the snack that mixed well with the sweet teriyaki sauce.  I always worry that chicken will be very dry at these snack spots but that was not a problem here. 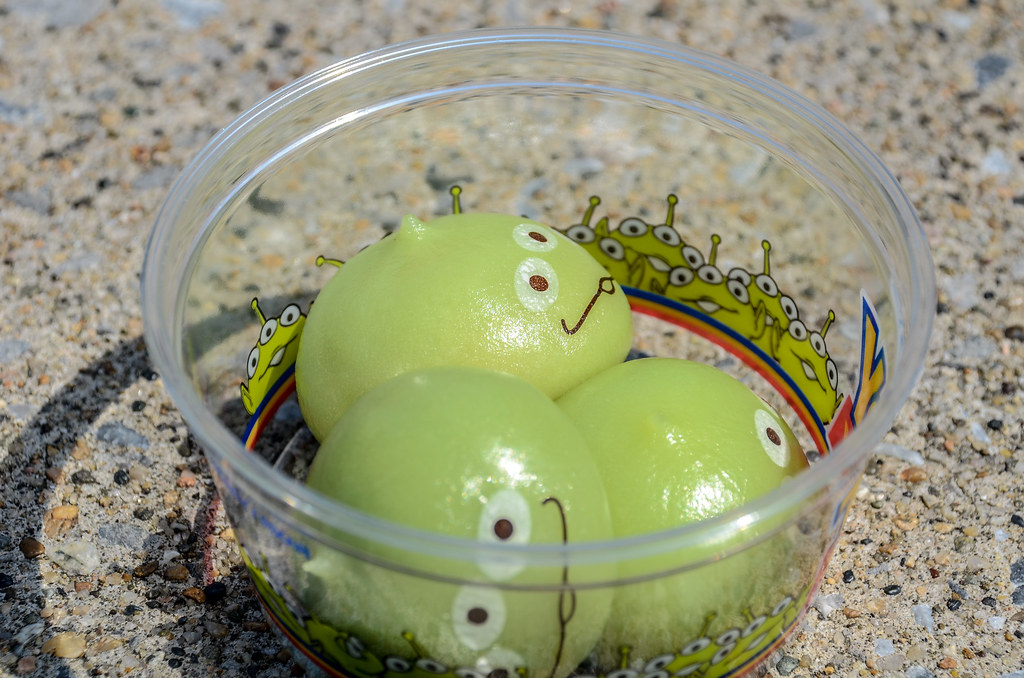 My favorite of Tokyo Disney’s sweet snacks, the little green alien men were delicious.  These are also served in Tokyo Disneyland but as storm troopers.  If you’re unfamiliar with mochi, they are pounded rice cakes with cream in the middle.  Each serving comes with 3 mochi filled with strawberry, chocolate, and custard.  My favorite was the custard one but they were all delicious.  While other cream filled mochi weren’t my favorite on the trip, these were fantastic. 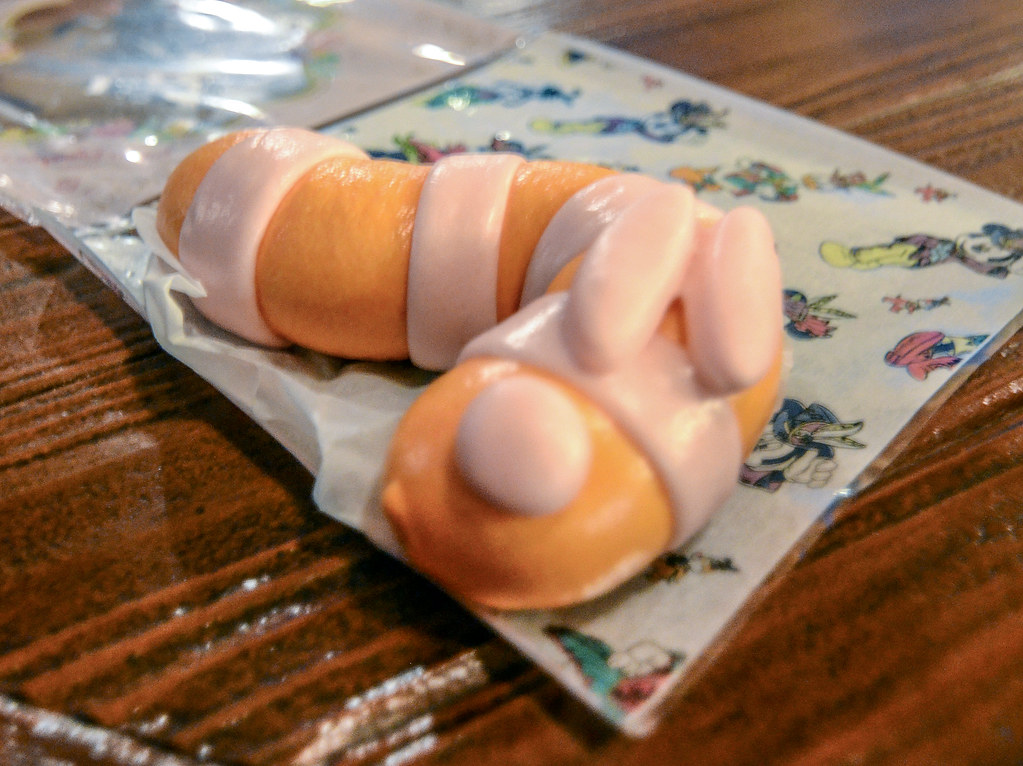 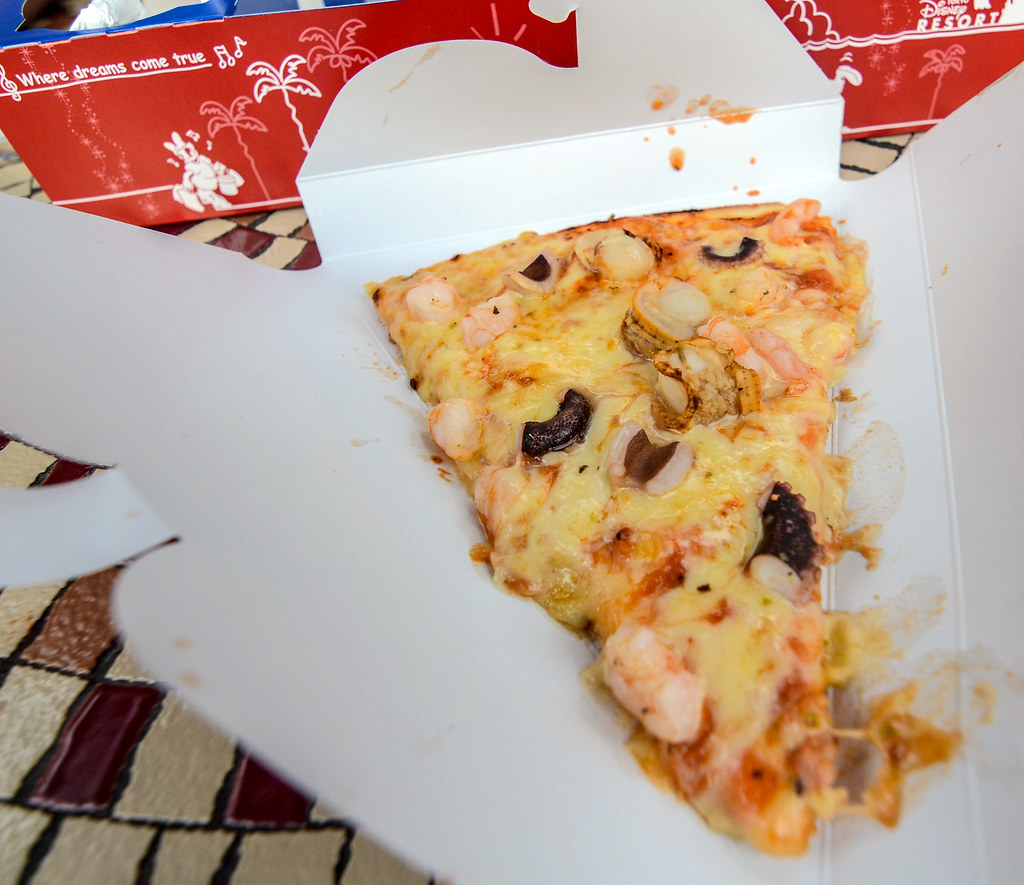 Maybe this shouldn’t be counted as a snack because a slice of pizza can be a whole meal.  If you’re counting this as a whole meal while at Tokyo Disneyland then you should splurge more and that’s why it counts as a snack.  As a whole, Tokyo Disney (and Japan as a whole) does seafood extremely well and this somewhat bad-looking piece of pizza is the case in point.  By all means, this looks too greasy and seafood for around $5 seems pretty dangerous.  Instead, I got this on our last afternoon at Tokyo Disneyland and immediately was sad that I hadn’t got it a few more times.  Melissa tried it and immediately went and bought a piece.  Another one of my friends did the same thing.  The pizza had just enough sauce to balance the rich seafood.  The seafood was surprisingly fresh and delicious.  This is the snack I crave the most while sitting at home and dreaming of being in Tokyo Disney Resort. 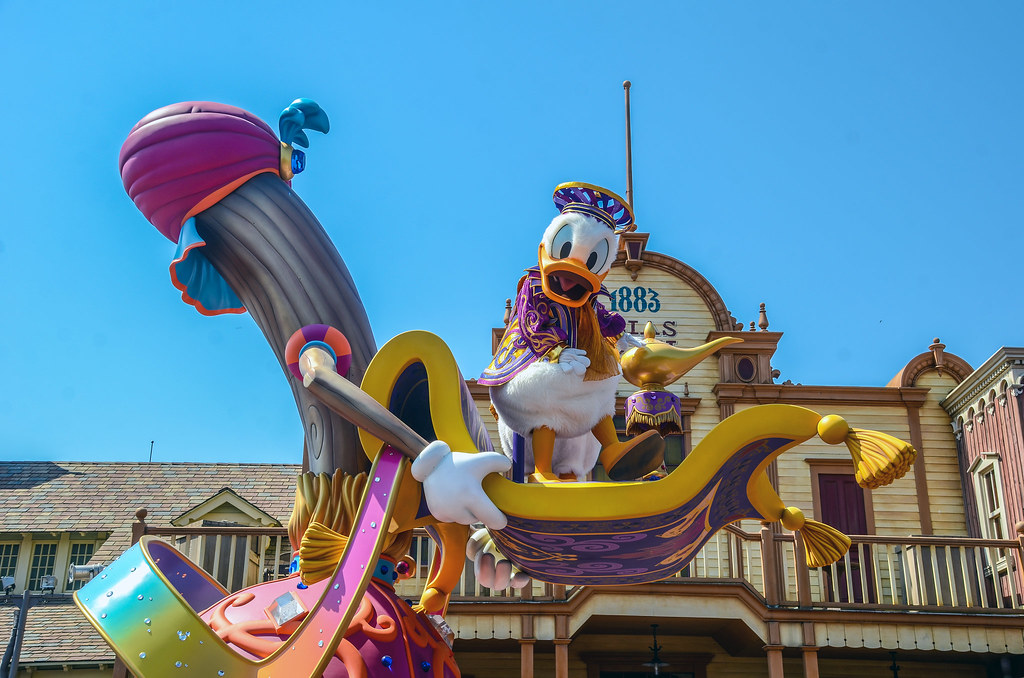 We’re looking forward to adding to this list over the years.  What do you think of these snacks?  Let us know that and any other Tokyo Disney Resort questions you have down below in the comments.  Thank you for reading Wandering in Disney.  If you enjoy our content please subscribe to the blog (via WordPress or email) and like our social media pages.  You can find all of those things on the right side of this page.  Have a great day!