Dreaming Up is Tokyo Disneyland’s latest daytime parade introduced as a part of the park’s 35th anniversary.  While the 35th celebration takes place until March 2019, I expect the parade to last much longer, probably until the 40th anniversary.  This post will share a few photos pf Dreaming Up as well as a review.  I’ll also add in a few tips along the way. 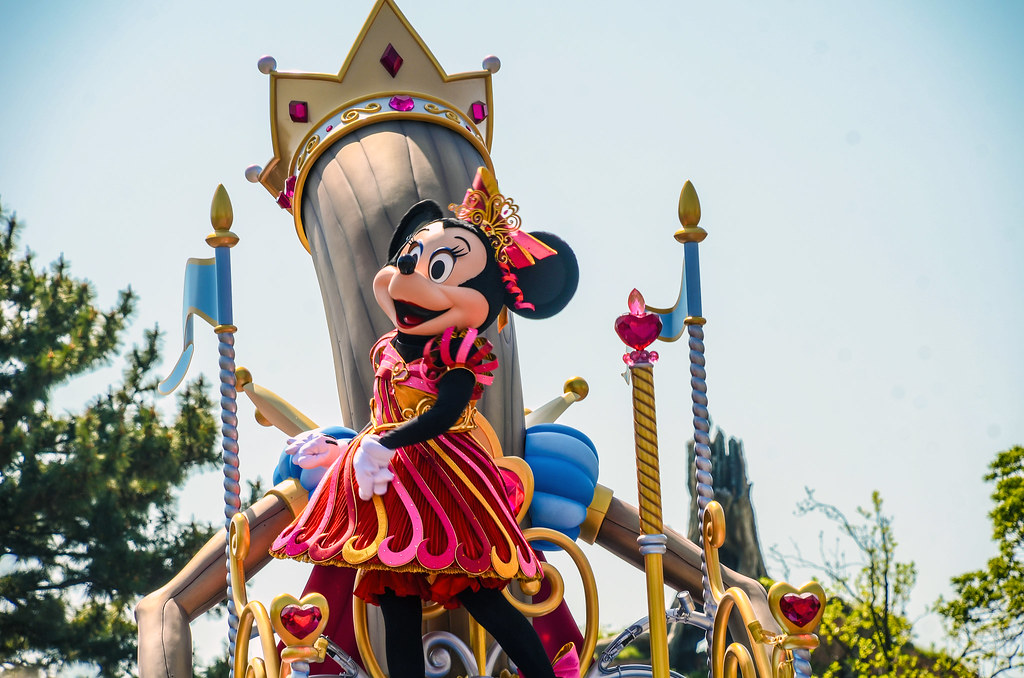 Tokyo Disney Resort has a great blend of intricate details and jaw-dropping moments.  For every story building moment or beautiful, out-of-the-way path there is something larger than life waiting just around the corner.  For every detailed land there is a show or parade that takes the top off.  Dreaming Up fits in the latter category, a huge parade that is full of over-the-top fun.

Fandom in Tokyo Disney Resort is a little more character based than what we’re used to in the states.  With that in mind, shows and parades can get very crowded far before the show.  Couple that with Dreaming Up being a brand new offering and the parade will draw very high crowds. 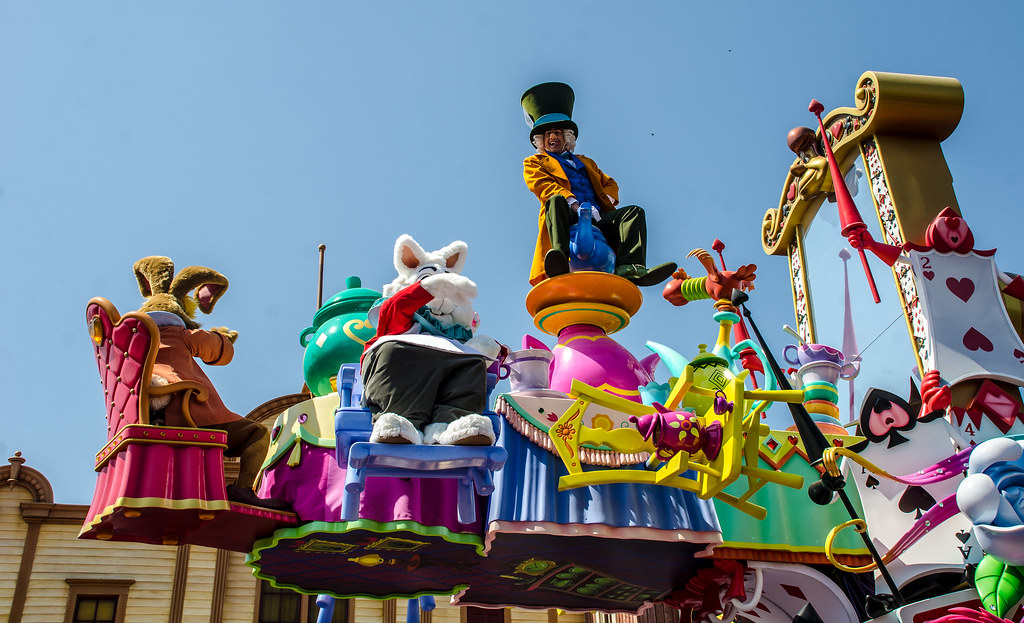 If you want to sit for Dreaming Up, I’d recommend getting to your preferred location at least 30 minutes before show time.  Even that is pushing it and you may have to look around for seats that won’t likely be in the first row.  If you don’t mind standing then show up 15 minutes before show time and stand right behind the seated crowd.

We saw the parade from Westernland and the edge of Fantasyland.  I thought the Westernland location was less crowded and might have had better views.  Being near the castle is another ideal location if you are taking photos.  If not, then I’d recommend a less crowded area. 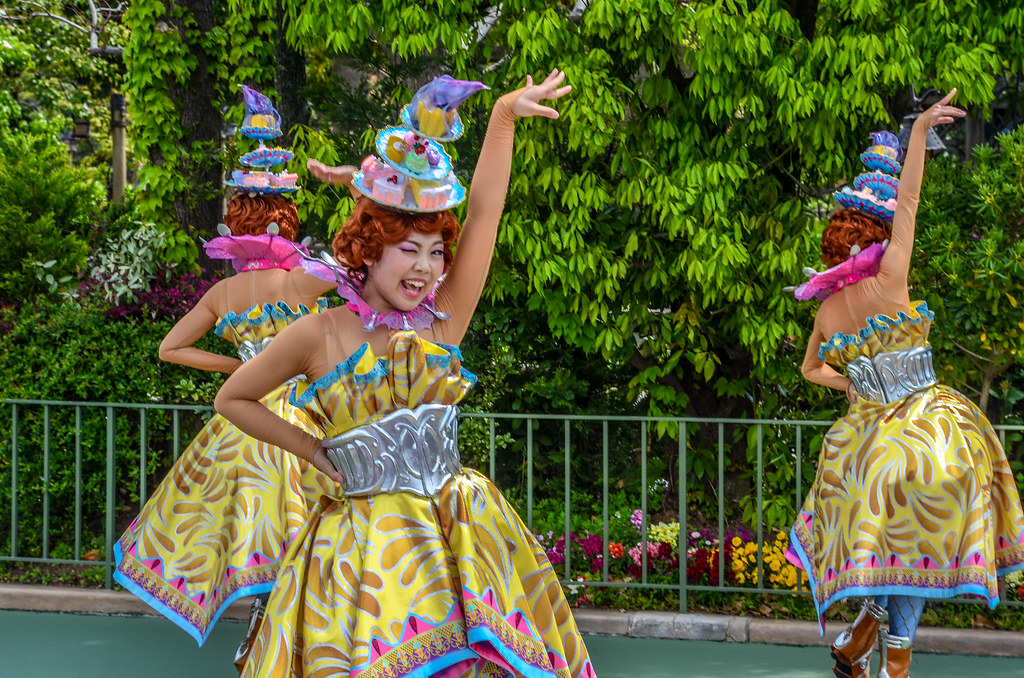 On to the parade!  As I mentioned, Dreaming Up is over-the-top-fun.  The floats tower above the parade route and there are a huge amount of characters throughout the parade.  The music certainly fits the feeling.  While a departure from the timeless parade soundtrack, Dreaming Up featured pop music without sounding like Kidz Bop vol. 54.  This wasn’t Paint the Night with a soundtrack that wanted to capture the youth’s attention but ultimately failed.  Instead it was a fresh, poppy take on some classic Disney songs.  There is also an original song mixed into the soundtrack that is upbeat and bouncy, with a fun melody.

In that same vein, the costuming is absurdly fun and beautiful.  The performers pulled off these costumes largely due to their enthusiastic performance.  In other daytime parades there seems to be quite a bit of choreography and less fun for the performers who are in between floats.  In Dreaming Up the loose choreography leads to a more enjoyable interaction.  Here were some of my favorite costumes. 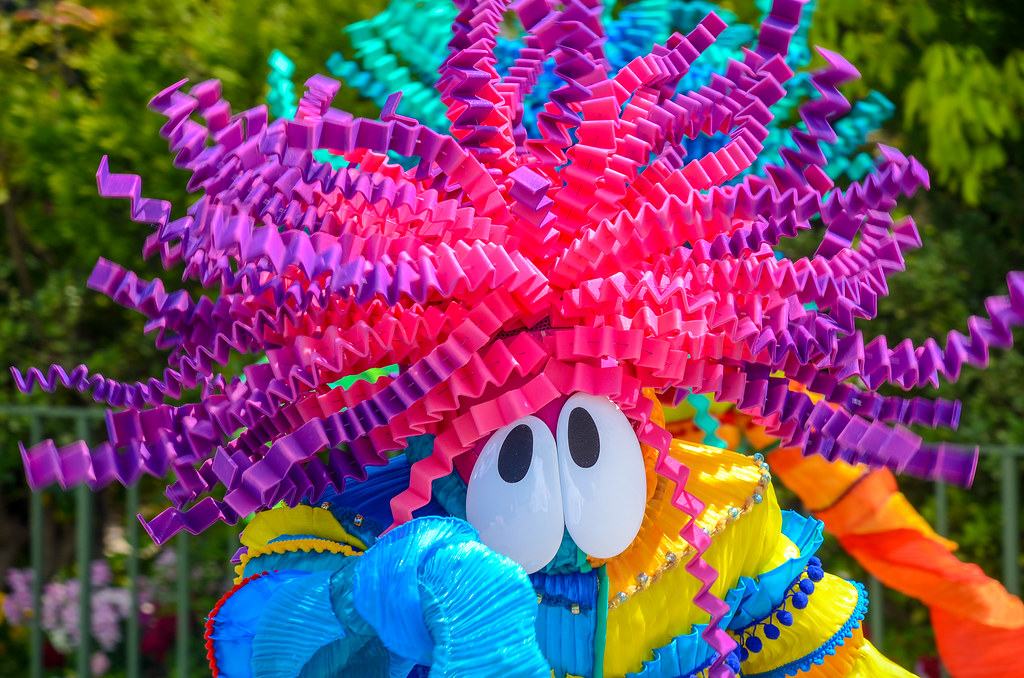 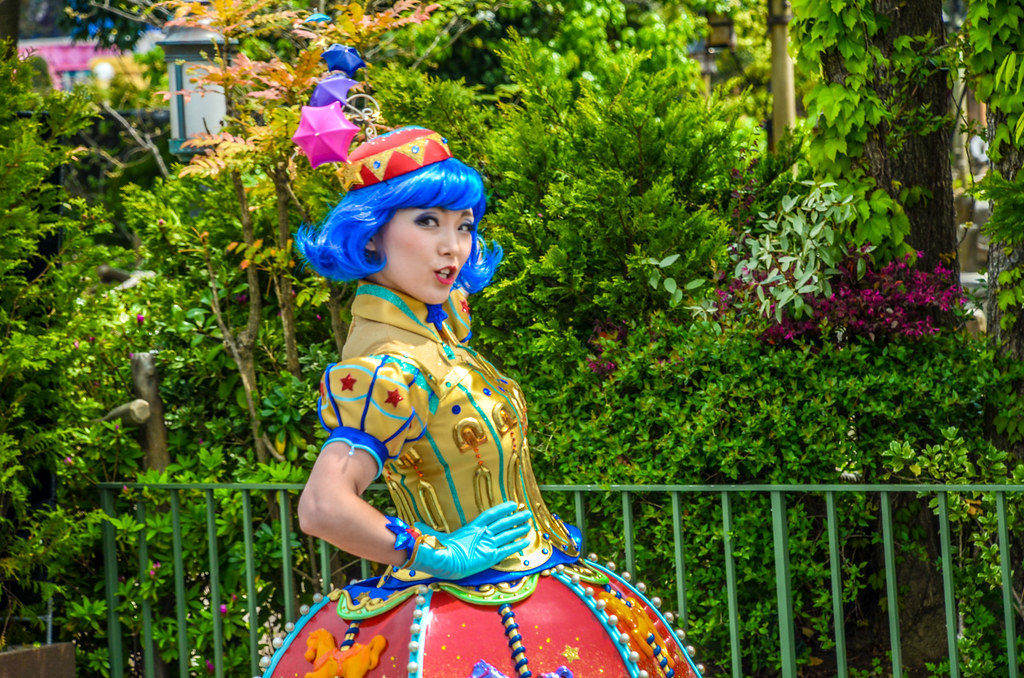 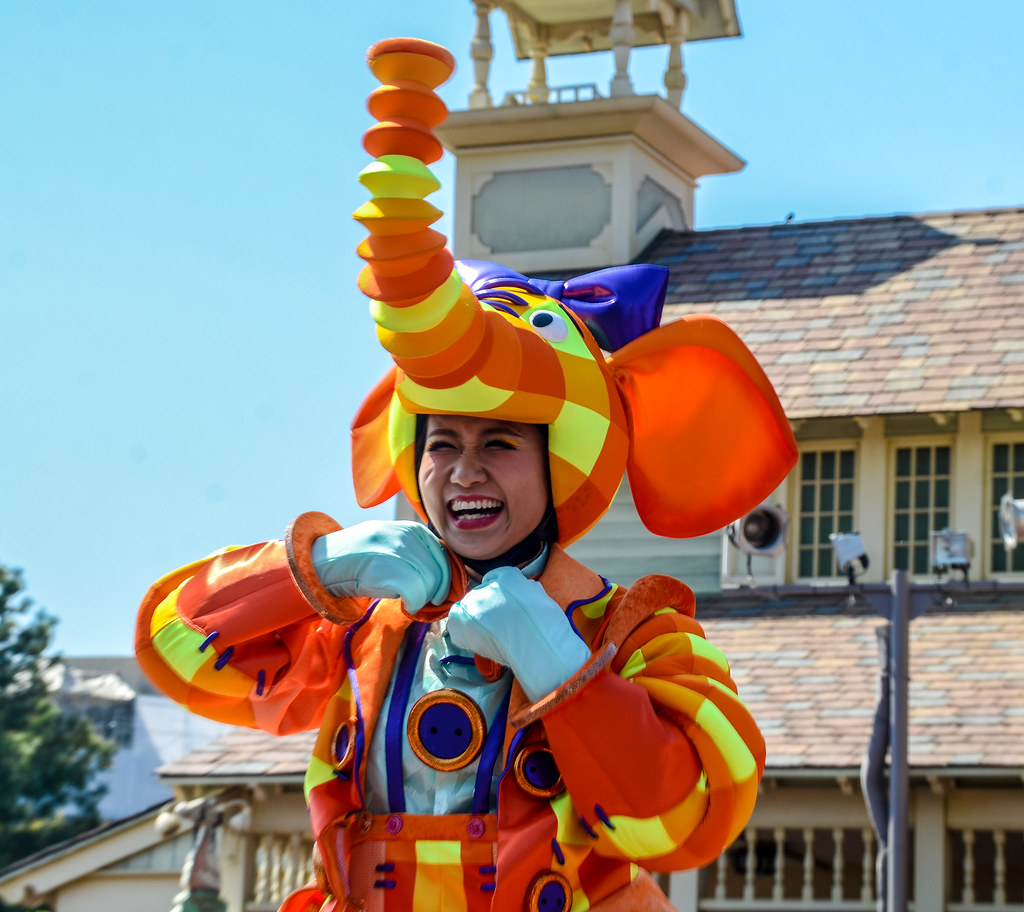 As with all parades, where Dreaming Up really shines is with the floats.  The opening float really sets the stage with Mickey and Pluto riding in the front of a massive, horse-decorated, beautifully colored float. 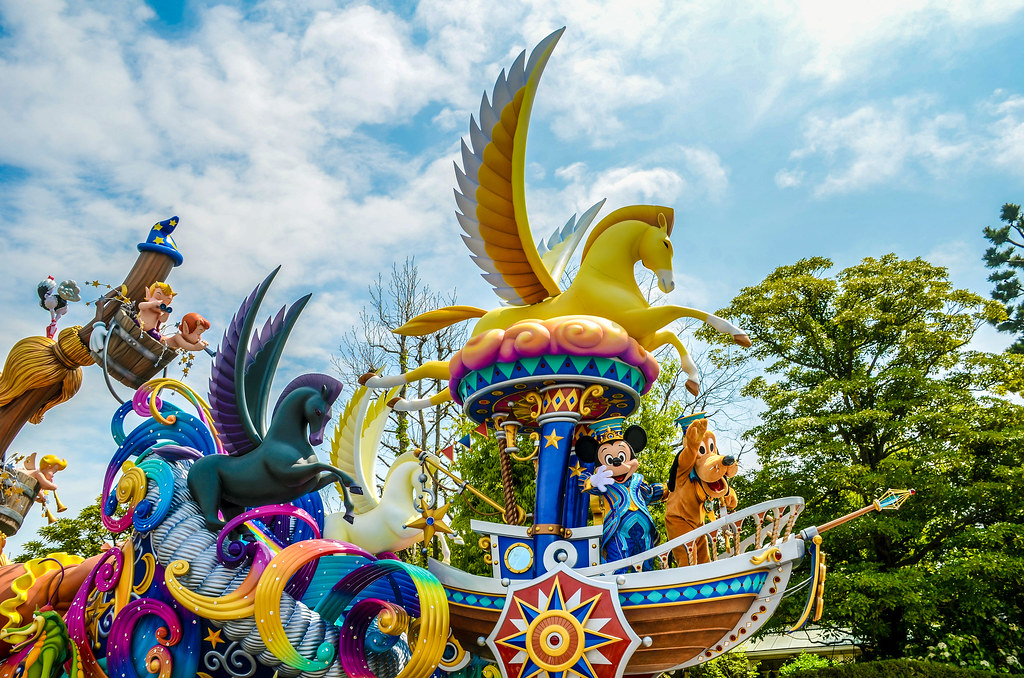 Honestly, it’s hard to tell all that’s happening in this float but it is absolutely mesmerizing.  This really sets the mood of the parade, with a gigantic scale and wow-factor.

Throughout the parade the rest of the fab-five are on smaller floats, mostly mini broomstick floats akin to those in Fantasia.  I enjoyed this approach maybe because of the novelty of the Fab Five not always getting center stage.  I also enjoyed the shots of Goofy and Minnie solo. 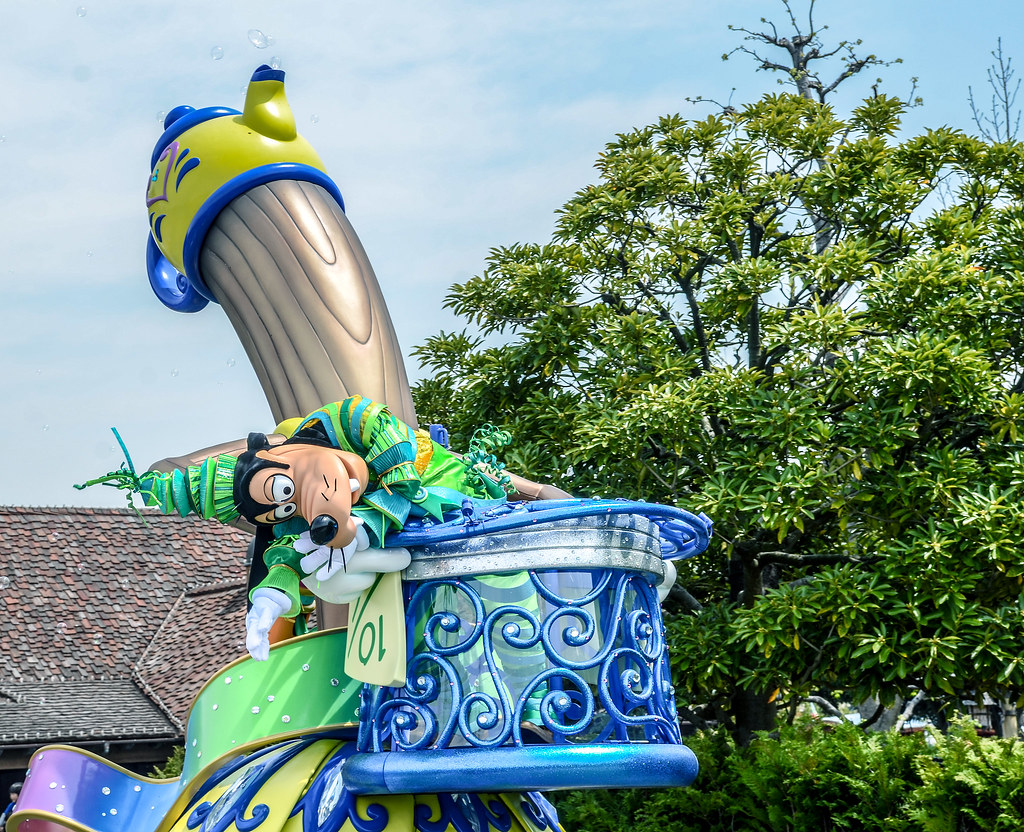 To round out the Fab Five, Donald (and Daisy) show up on a magic carpet.  Weirdly enough, Aladdin and Jasmine are walking around at the end of the parade.  It’s one of the aspects of Dreaming Up that is both puzzling and charming. 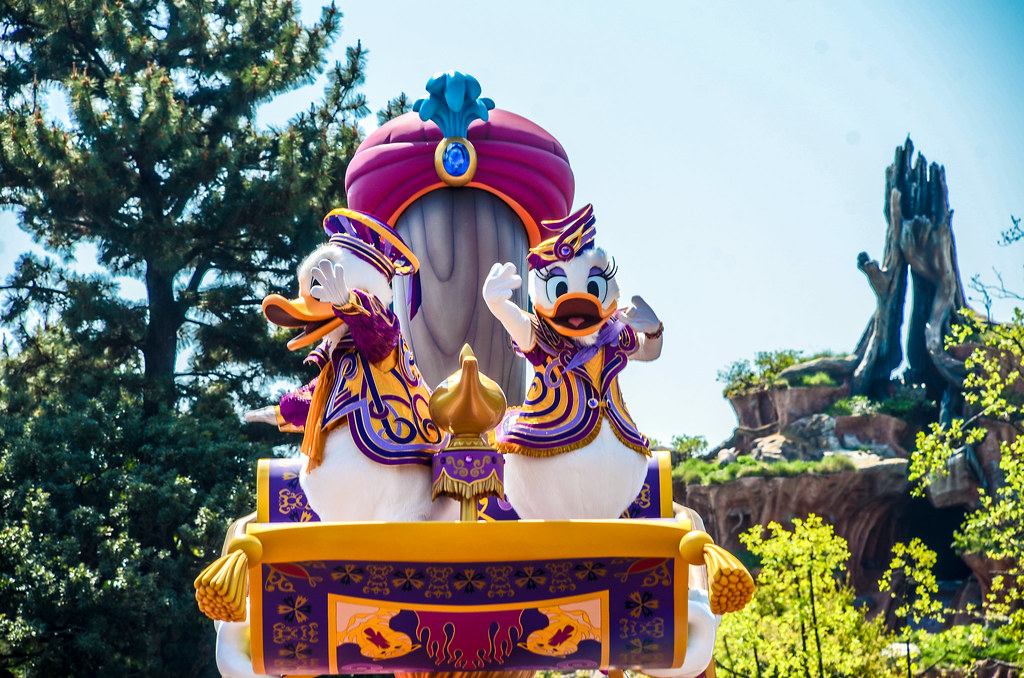 There are more show stoppers in this parade, notably the princess float and the Baymax float.  The princesses are hoisted high above the ground near a beautiful glass ceiling.  This is as close to understated as the parade gets, with a dazzling roof and princesses standing on chandeliers.  Yeah, the parade is crazy. 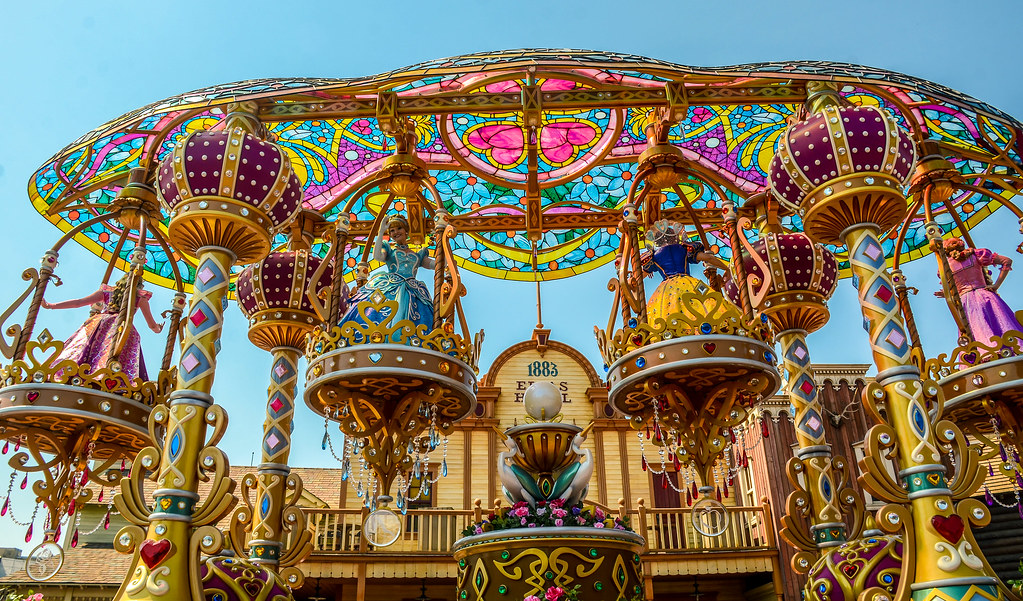 Shortly following that comes Baymax soaring above the crowd with Hiro riding on top, along with a torii gate.  From simply judging with my eyes, this appeared to be the tallest float in the parade.  Seeing it tower above is magnificent makes the float one of my favorites, not just in this parade but in any I’ve ever seen.

Taking the crown for my actual favorite is the closing float(s) which feature Mary Poppins, Peter Pan and Wendy.  Mary Poppins kicks off the finale with a float that gives the illusion that she’s rising and/or falling with her umbrella.  It’s a very cool effect that would be the highlight of any other parade. 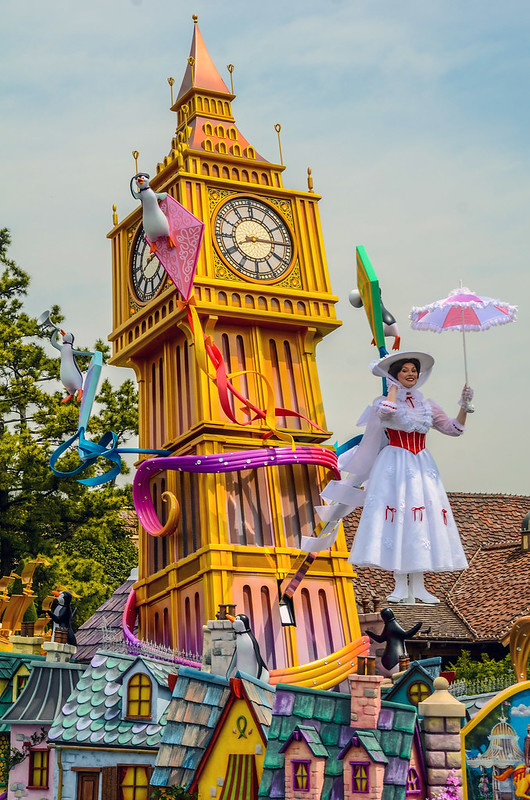 The Peter Pan and Wendy float really takes the cake though as the characters dangle above the crowd performing acrobatics.  With the moon as a backdrop, this is a classic Disney moment that makes you stop dead in your tracks. 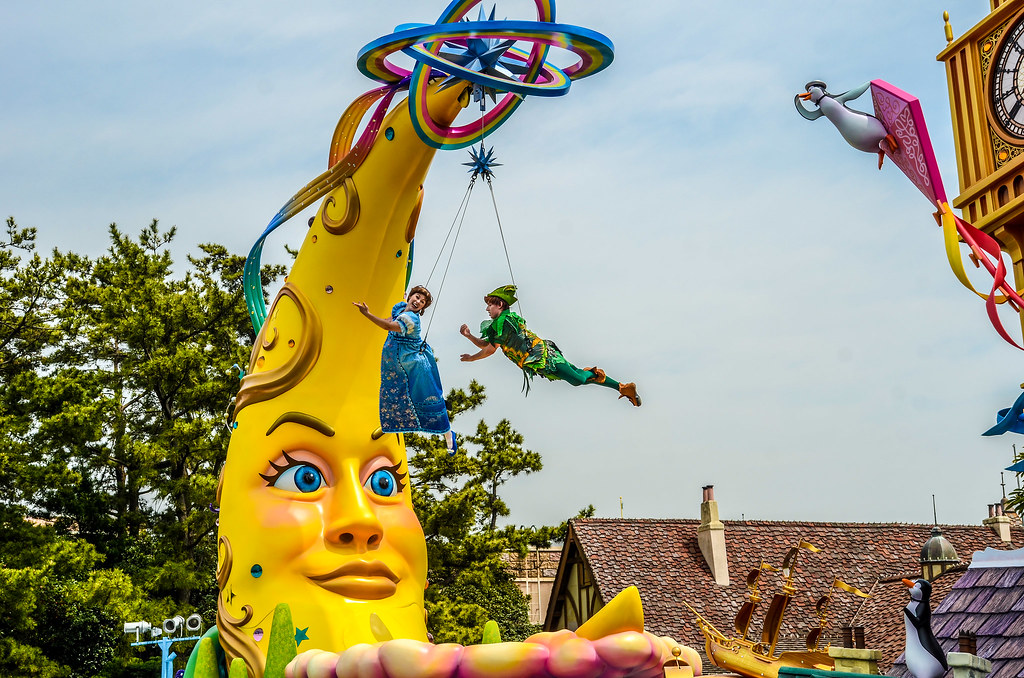 It’s the most incredible parade float I’ve ever seen and there’s not a close second.  I was very impressed by, not only Peter Pan and Wendy’s acrobatics, but the way they interacted with the crowd while up there. 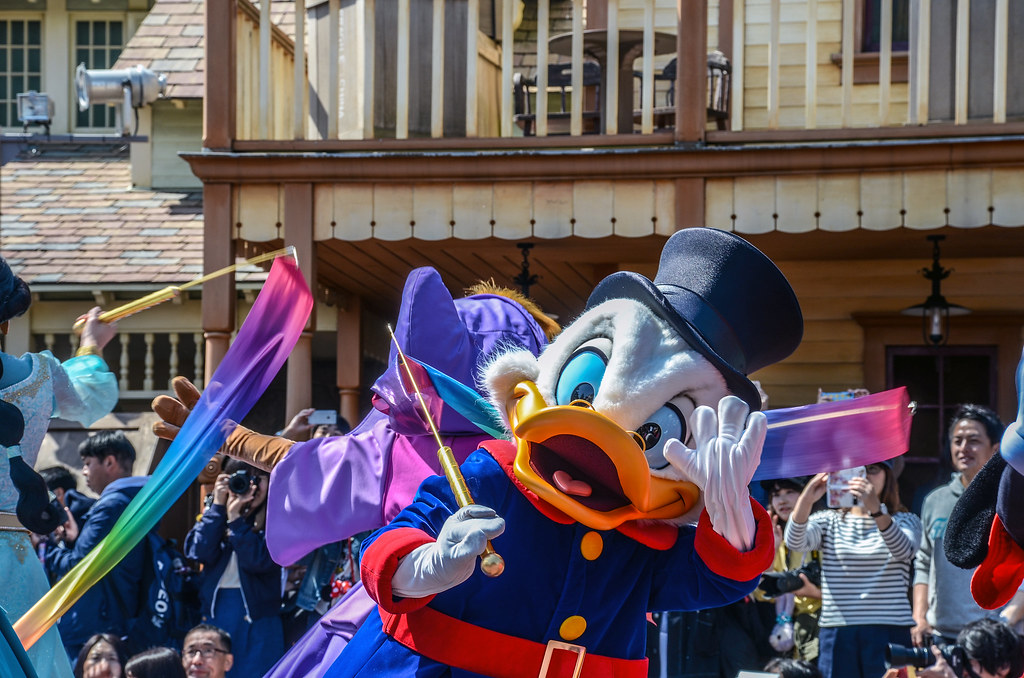 Shortly following the final float is the strangest array of characters I’ve ever seen.  I wouldn’t bring them up otherwise because the Peter Pan float is basically the finale.  This group of characters features the Big Bad Wolf and 3 Little Pigs, Clarabelle Cow and her boyfriend (apparently named Horace Horsecollar, the best Disney name every), Max (Goofy’s son), Scrooge McDuck, 2 of the female mice (Suzy and Perla) from Cinderella, and Aladdin and Jasmine.  I may have missed some in there.  Frankly, I love the hodgepodge of characters thrown in here.  It makes me smile and, like the rest of the parade, is a crazy amount of fun. (Thanks to a reader/commenter for helping me out with the character names and relations!) 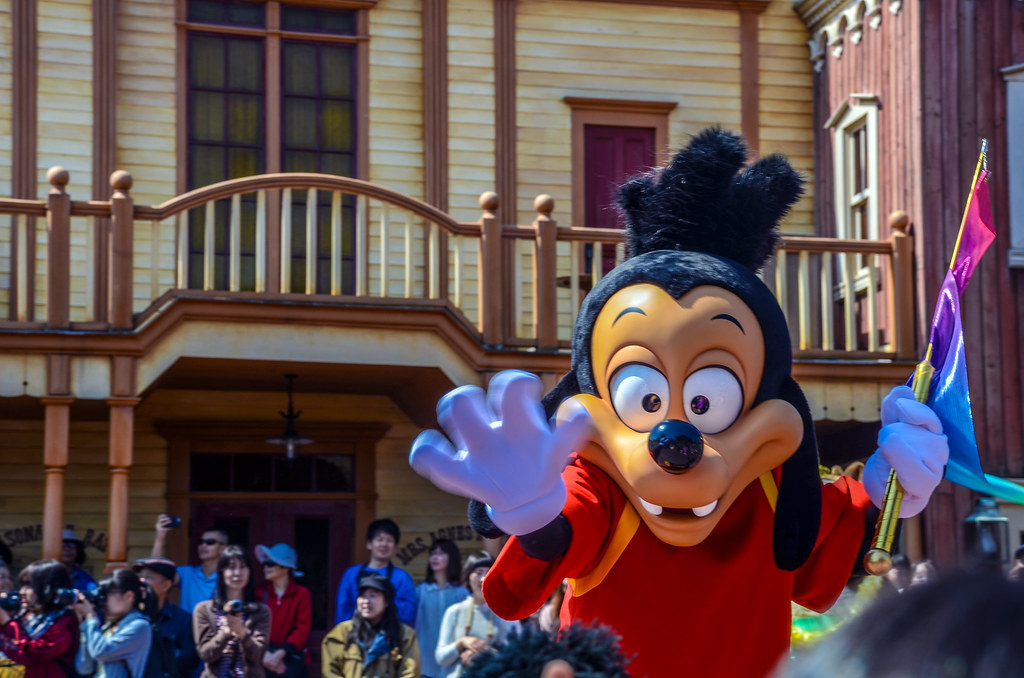 Dreaming Up is an extravagant daytime parade and the best I’ve ever seen.  The music, characters, costuming and floats combine to make a joyful experience that you won’t soon forget.  I’m not much of a daytime parade fan but I would put this as one of the top 5 things to do at Tokyo Disneyland and make it a must-do to anyone visiting. 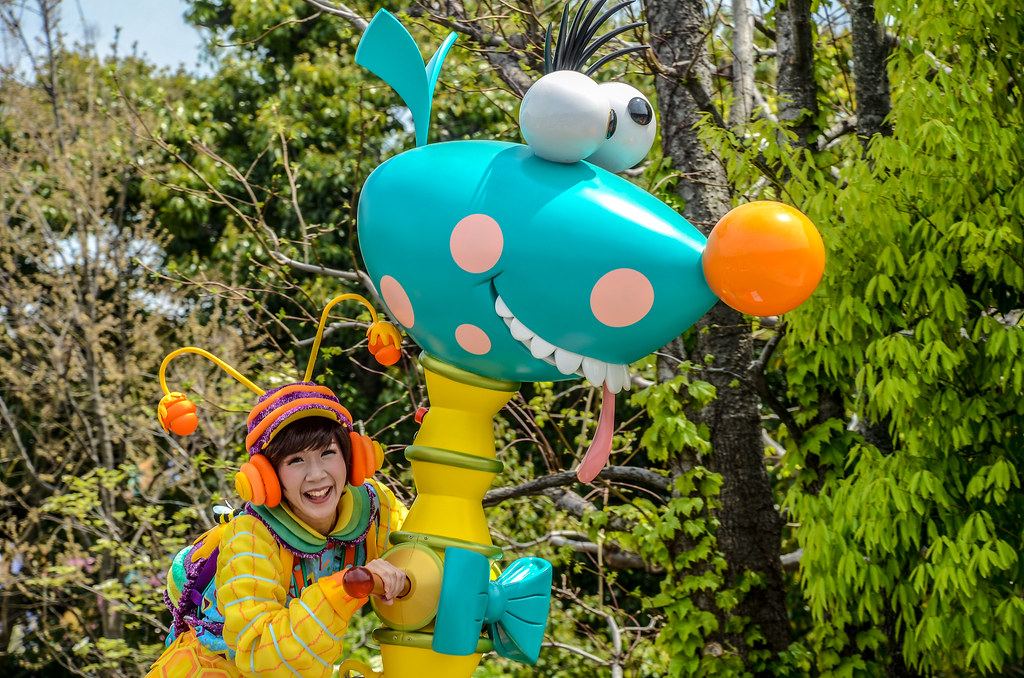 Do you have any thoughts or questions about Tokyo Disneyland’s Dreaming Up?  Let us know in the comments!  Thank you for reading Wandering in Disney.  If you enjoy what you’re reading please subscribe to the blog via WordPress or email and like our social media pages.  You can do both of those things on the right side of this page.  Have a great day!