A couple of days ago Disney released the opening date for Hollywood Studios upcoming Toy Story Land – June 30th, 2018.  While many, including myself, thought this new land would open by Memorial Day, Disney has decided otherwise.  The construction may be behind schedule or Disney may be looking for a boost in mid-summer attendance, as the great Tom Bricker writes here.

If you don’t know already, Toy Story Land will feature two new attractions, a counter-service restaurant and I’m guessing a few gift shops.  The new features will connect to the already built Toy Story Mania, so I guess we can give the land credit for three attractions.  Toy Story Lands have been built at international parks as an easy way to get some children’s (cheap) rides in the parks.  Renderings show a slightly different Toy Story Land coming to Walt Disney World than the previously built lands. 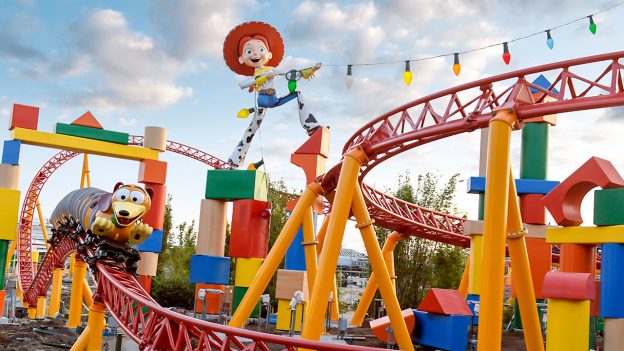 Alien Swirling Saucers is the other addition to the land.  This is the same ride system as Mater’s Junkyard Jamboree in California Adventure, which is more fun than the average spinner ride but nothing to be all that excited about.

Toy Story Land’s idea is that guests are shrunk down (not literally) to the size of a toy and entered the backyard of Andy.  While I think the theme will be executed well enough, I’m just not sure that the idea is all that great.  Pandora, Harry Potter, and Cars Land all work because, among other things, they are specific places with unusual characteristics.  Entering a backyard is not unusual.  Now, seeing a slinky-dog far bigger than you is different but is it enough to make the land stand out?  Time will tell.

If you haven’t caught on from the tone, I’m fairly pessimistic about the addition of the land.  It’s not that I think this will be bad or isn’t needed.  Hollywood Studios absolutely needs to add more kid-friendly attractions and the land will accomplish that to a small extent.  It’s more that none of it is interesting to me.  I love Pixar and Toy Story but the attractions are run-of-the-mill and don’t add anything that will move the needle.  Instead the land will likely offer a few fun rides and add capacity to the park.  Again, that’s mostly good news.

Whether the land is viewed as a success long-term may come down to how well Toy Story Mania is integrated into the new additions.  While it will be a part of the land once it opens, I’m not convinced that it will feel like that.  If it does then Toy Story Land will feature 3 attractions, all varying in degree of popularity.  In my eyes Toy Story Mania is a D-ticket, Slinky Dog Dash a likely C-ticket, and Alien Swirling Saucers a B-ticket.  Pair that with a quality counter-service restaurant, which Hollywood Studios desperately needs, and this land will be a success.  If you don’t connect Toy Story Mania to the project then it may disappoint in your mind as this will simply be two attractions that are fun but lacking depth.

All in all, I’m not expecting big things from Toy Story Land.  The attractions are needed and will likely be fun but I don’t think the environment will measure up to the latest land’s Imagineers have created.

What are your thoughts on the upcoming Toy Story Land?  Let us know in the comments, along with any questions you might have.  Thank you for reading Wandering in Disney.  If you enjoy our content please subscribe to the blog (via WordPress or email) and like our social media pages.  You can find all of those things on the right side of this page.  Have a great day!