We just celebrated our 3 year anniversary of Wandering in Disney.  Thank you for your support!  On to the post!

Trattoria al Forno is an Italian restaurant in Walt Disney World.  Serving breakfast and dinner, Trattoria sits at the base of the Boardwalk Resort and is a short walk from Epcot.  While dinner is a more traditional sit-down meal, breakfast is character dining and offers a mix of both American and Italian inspired dishes.  The restaurant does take part in the Disney Dining Plan (1 credit), accepts Tables in Wonderland and offers a 10% discount to Annual Passholders.  This review will cover a recent breakfast we had at Trattoria al Forno. 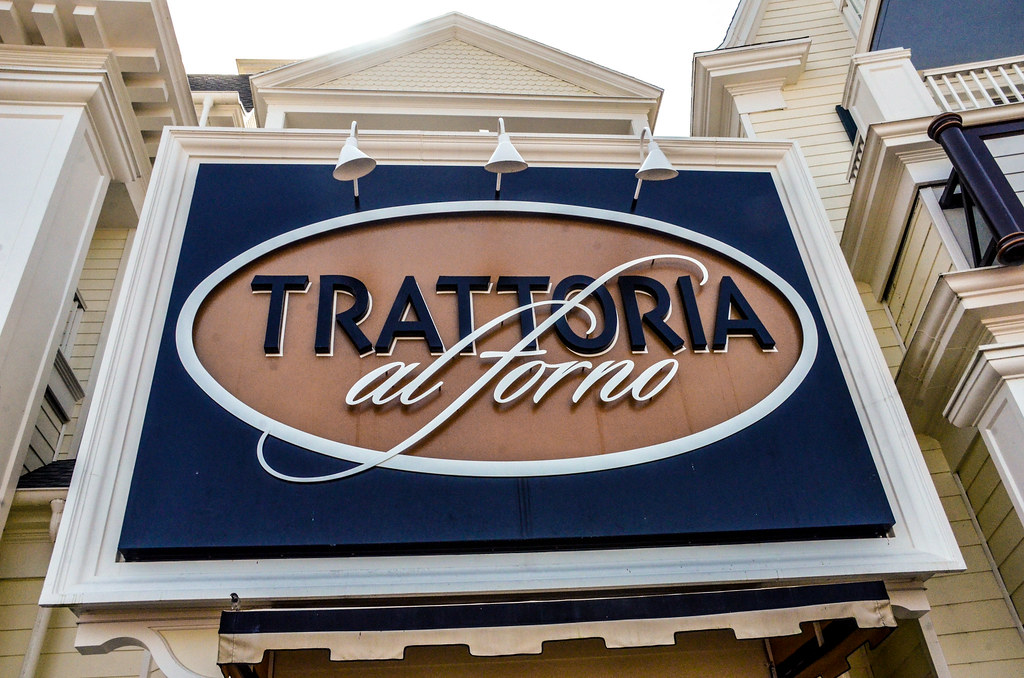 Restaurants along Walt Disney World’s Boardwalk seem to change fairly often.  At least in the space that Trattoria al Forno currently inhabits.  Before Trattoria came Kouzzina and before that was something called Spoodles and on and on.  I’m not sure why changing of hands because the location is excellent.  Sitting just outside of Epcot and a short boat ride from the Studios, this restaurant is easily accessible.  Still, it feels like the property may struggle to succeed and has to come up with incentives for which to visit.

The latest incentive is the Bon Voyage Breakfast.  Why breakfast has to have a name is beyond me but I digress.  This breakfast features select Disney characters – typically Rapunzel and Flynn Rider along with Ariel and Prince Eric.  While the restaurant wasn’t really on my radar, after my wife saw that there was a character meal with Rapunzel we had Trattoria booked ASAP.  Along with us for our meal was my sister-in-law Amie and my two adorable nephews.  Kids under 3 eat free here.  Colton, the oldest of the two nephews at just under 3 years old, had the chocolate waffles and loved them.  He loved them so much he wished that I would stop taking his photo. 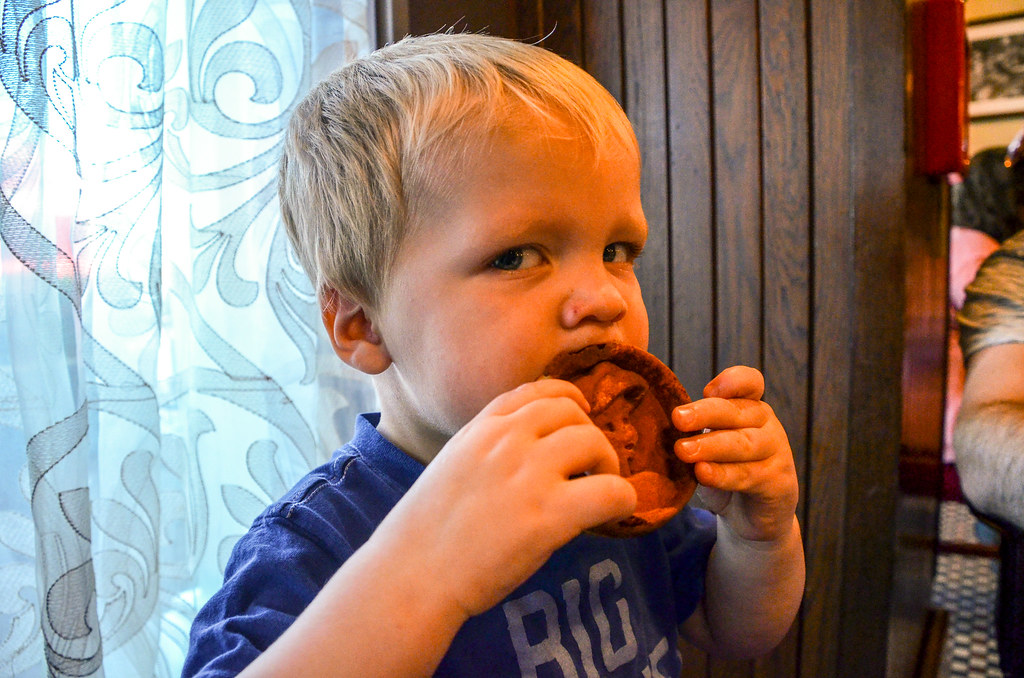 Back on track, the atmosphere at Trattoria al Forno isn’t anything to write home about.  The seating area looks nice enough but isn’t in the top half of Disney restaurants when it comes to theme or environment.  The open kitchen looked nice but I would imagine that comes more into play during dinner. 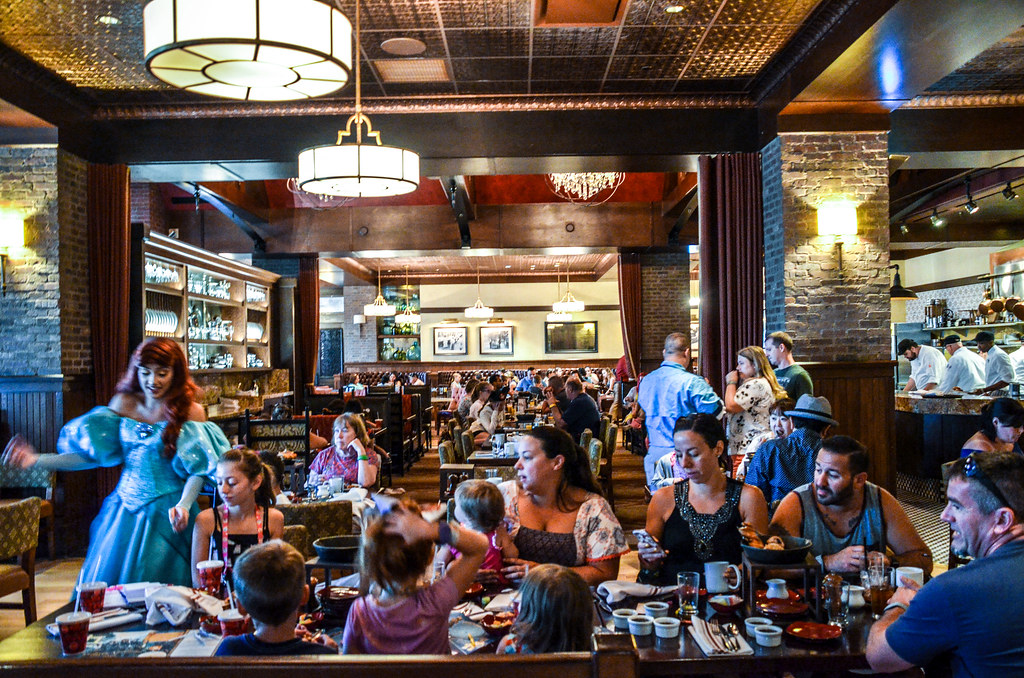 Character meals always seem fairly hectic to me and this was no different.  Fortunately, there was plenty of room between the tables for the characters to maneuver and kids to follow during a parade.  I didn’t notice any differences here as opposed to other character meals I’ve had meaning that the characters came to your table, chit-chatted for about a minute, took a photo and then went on their way.  Your mileage will vary depending on the demographics of your family and how busy the restaurant is, I’ve only had a few frustratingly short encounters over double-digit character meals and none of those encounters were at this particular meal. 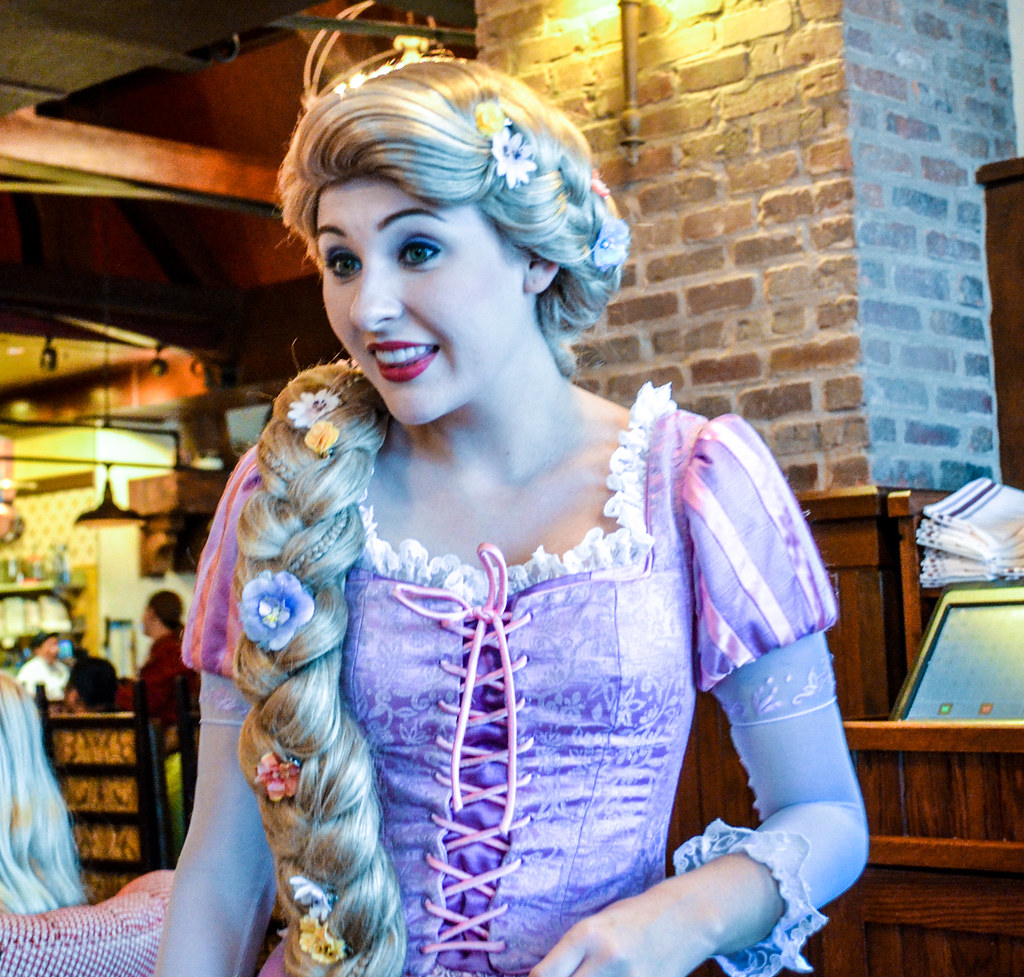 Rapunzel is a unique character to have at a meal and is exclusive to this restaurant, as are the princes (or whatever Flynn Rider is).  If your child, or you, love Rapunzel then this is probably the way to go.  I’m far from a character expert but have a decent idea of which ones are at certain restaurants because food.  If you have any questions in that regard let me know in the comments. 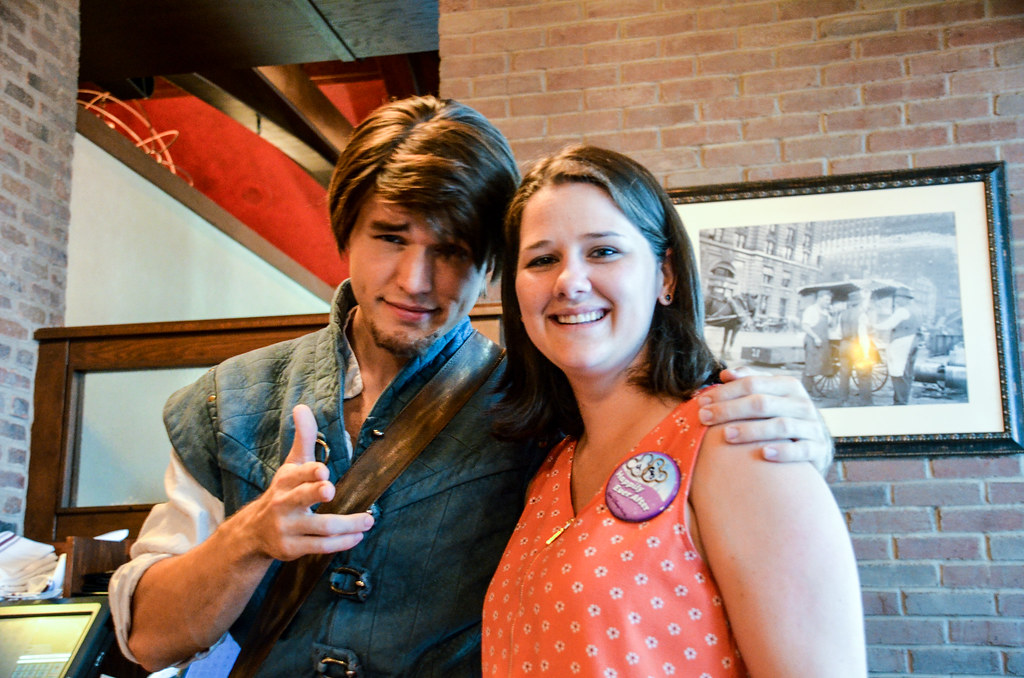 I didn’t see Melissa for the rest of this trip after this photo.  Odd… (Kidding)

Character meals are definitely in demand and, justifiably so, Disney charges a premium for them.  With that in mind, any meal you have with characters is probably not worth the price based on food alone.  That’s not to say the food won’t be good (we’re getting there), it’s just extra because you’re meeting characters.  Deciding whether to go or not should come down to if the character is unique and special to someone in your party, whether or not you want to wait in line in the parks for that character, and whether or not you want extra time with a character.  Put simply, character dining is a ‘Time vs. Money’ debate and there is no right or wrong answer.  I would advise trying it at least once, especially if you have someone who loves characters with you. 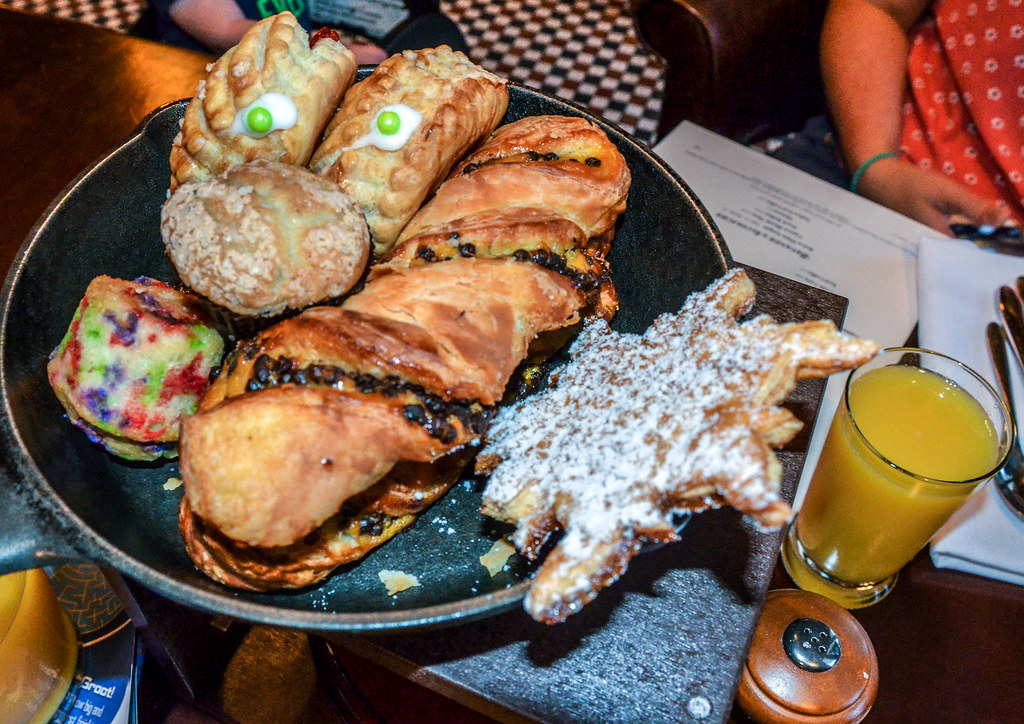 On to the important stuff – the food!  Breakfast is started with a plate of pastries brought for the whole table.  Be on the ready to snatch up what you want before the person next to you!  I enjoyed everything I tasted hear, specifically the pastry on the back of the plate that (was supposed to) resemble a clam shell.  This was raspberry filled and delicious.  All of the pastries were themed to one of the characters which was a nice touch. 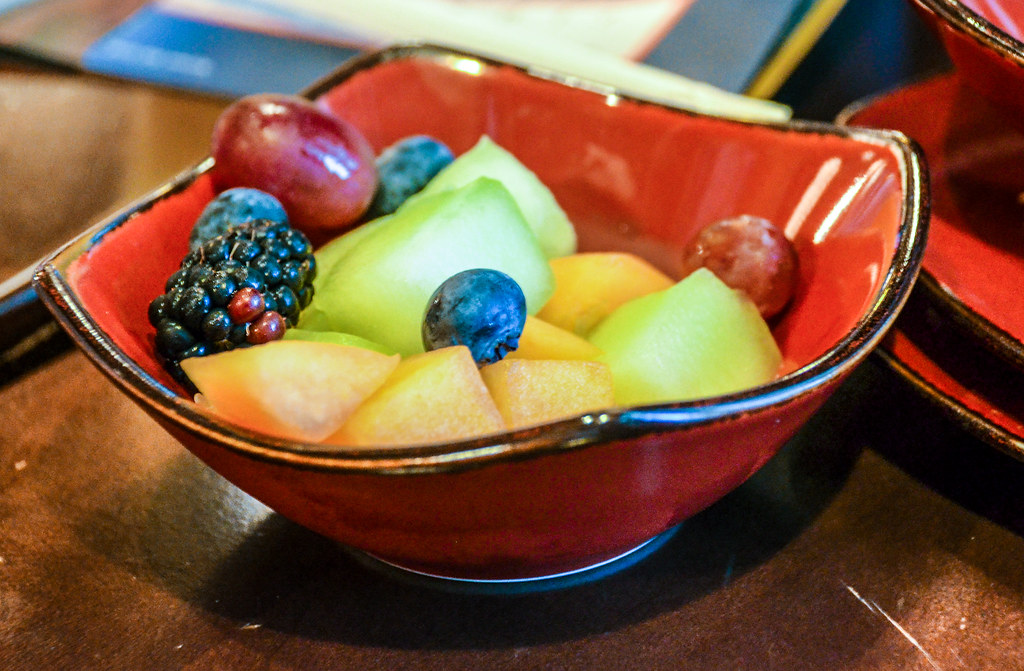 The next course was a choice between a yogurt parfait or fresh fruit.  I went with the fruit, which was your standard affair.  Everything tasted fresh and was enjoyable.

For the entrée, we had our pick between 7 different options.  Here’s a look at the menu.  I was impressed by the variety of food.  There were some different options here than the usual breakfast fare. 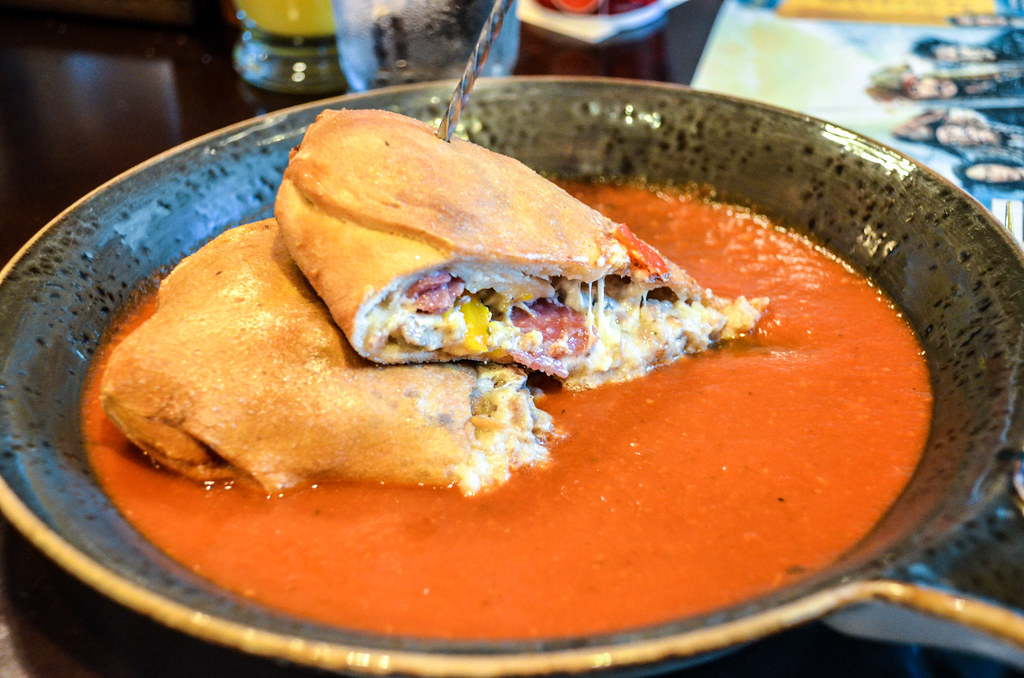 I went with King Triton’s Shipwreck al Forno.  Much to Ben Wyatt’s excitement, this was a breakfast calzone.  The inside is filled with scrambled eggs, cheese, peppers and meat.  The sauce this sits in is a sunday gravy, which is apparently similar to a red sauce you’d put on pasta.  I am not well versed in Italian food lingo.  I thought this was an excellent dish and very unique to breakfast.  While a calzone isn’t the fanciest thing, they dressed this up well and I enjoyed the blending of all the flavors.  This was extremely heavy though, to the point where you could share it.  If you like a more hearty breakfast, this is a good way to go. 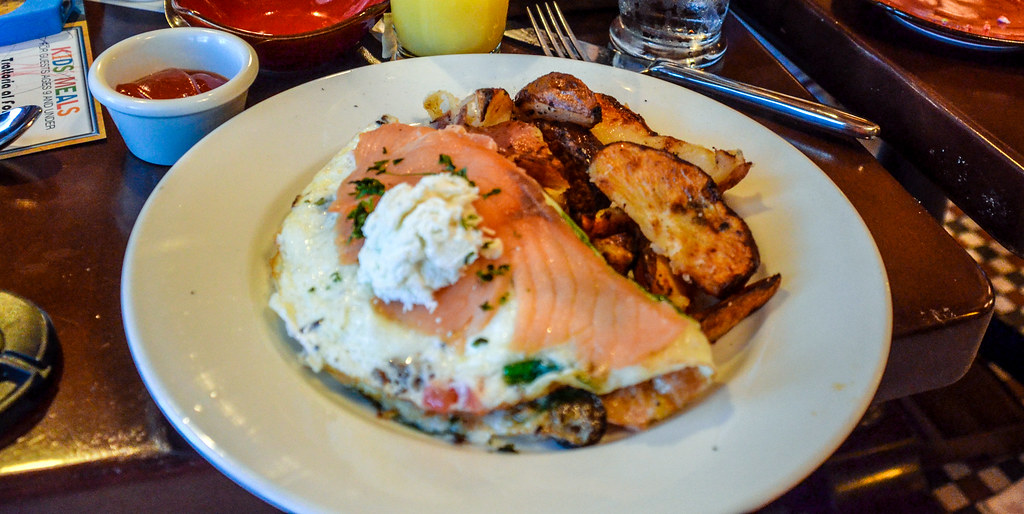 While I tried to give myself a heart attack before noon, Melissa went with the Swimmers Delight.  This is an egg white omelet with smoked salmon, goat cheese, spinach and a host of other healthy things.  Melissa liked the lightness of the dish but said she probably wouldn’t order again.  No surprise, when you put that much ‘healthy’ food on one plate then you’re asking for trouble.  Jokes aside, I think this was prepared well and had a good amount of flavor packed into the omelet.  Amie had the steak and eggs (Royal Breakfast).  She said the steak was fantastic and would recommend the dish.

All in all, I thought the food was very good.  Generally at character meals (especially breakfast) it seems that food is an afterthought.  That wasn’t the case here at all, I thought the dishes were interesting and all prepared very well. 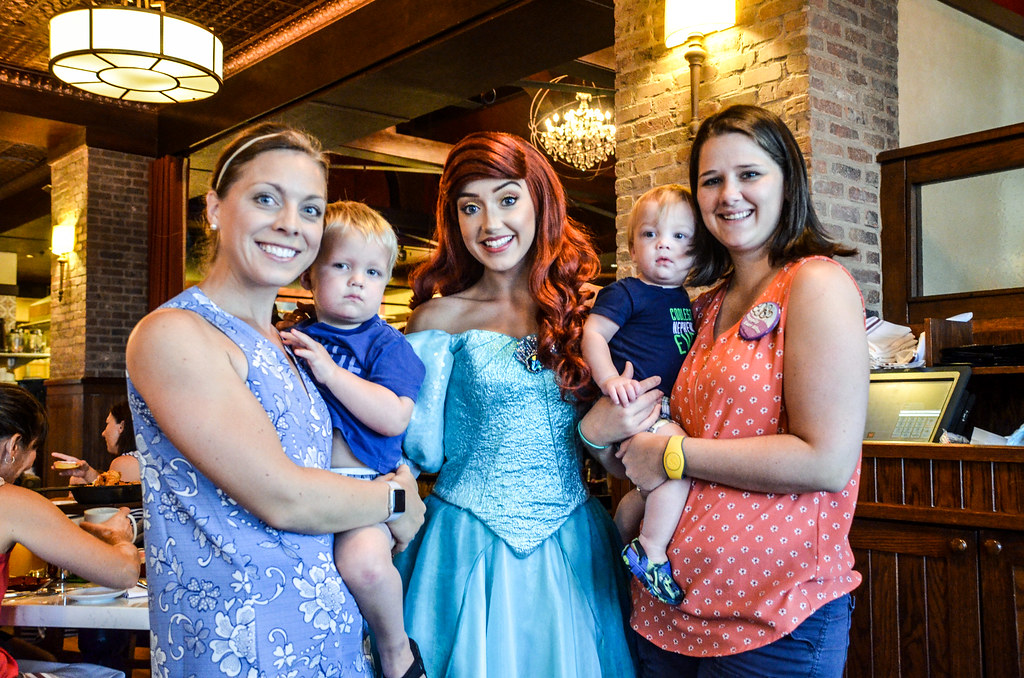 I really enjoyed our breakfast at Trattoria al Forno.  With that said, I’m not sure I would do it again and that is strictly due to price.  The cost is $34 per adult for breakfast, which is very steep for the first meal of the day.  Now, compared to other character breakfasts around property Trattoria looks much better and might even be the best value.  If you are looking for an easy way to meet one of these characters and love breakfast then I’d recommend this place.  If strictly looking for great breakfast food is the goal then I’d recommend trying somewhere else because you will save money.  Trattoria al Forno’s Bon Voyage Breakfast is a pleasant surprise but is still a steep price to pay for the first meal of the day.

Have you been to Trattoria al Forno?  Let us know your thoughts on the restaurant, along with any questions you have, in the comments.  If you enjoy what you’re reading here on Wandering in Disney please subscribe to the blog via email or WordPress and like our social media pages.  You can find all of those things on the right side of this page.  Thank you very much for reading, we appreciate it!