Ample Hills came to Walt Disney World in 2016 but had grown to fame in Brooklyn 5 years earlier after being opened by a young couple.  Their success story is a simple one but still inspiring.  You can read about their business on the official Ample Hills website (linked here). 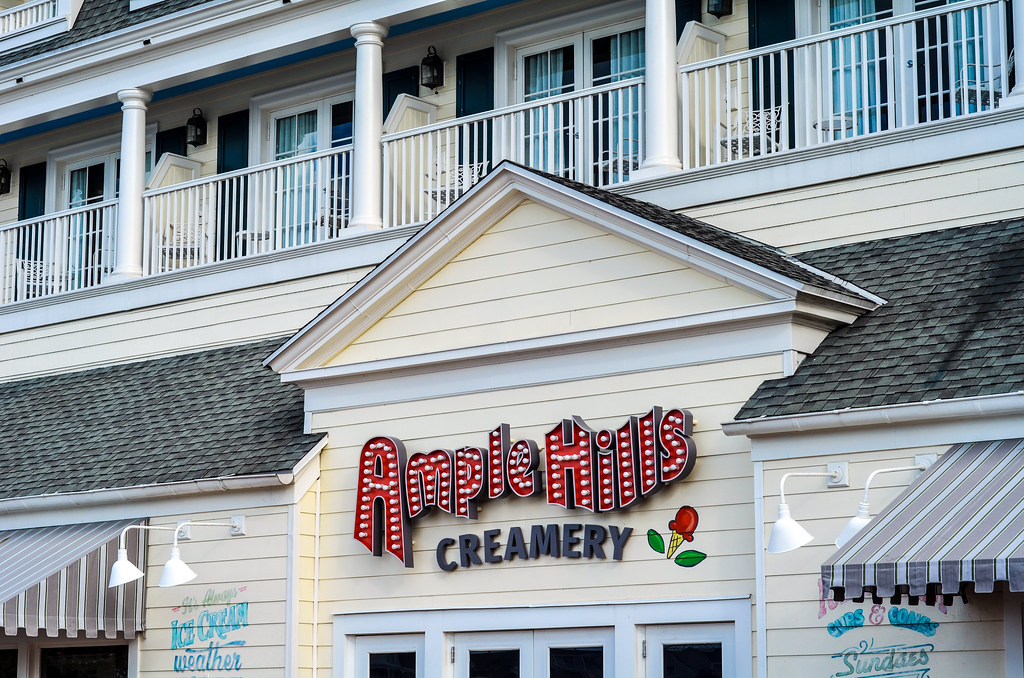 Since opening a store in Walt Disney World, I’ve heard many fans rave about their ice cream.  With that in mind, we stopped by this cute little shop on our last trip there.

What first stood out to me was just how well the shop fit the style of the Boardwalk.  Now, the candy shop (and a few other shops) that were replaced by these updates certainly fit the theme too but the inside of those didn’t dazzle quite like Ample Hills, in my opinion. 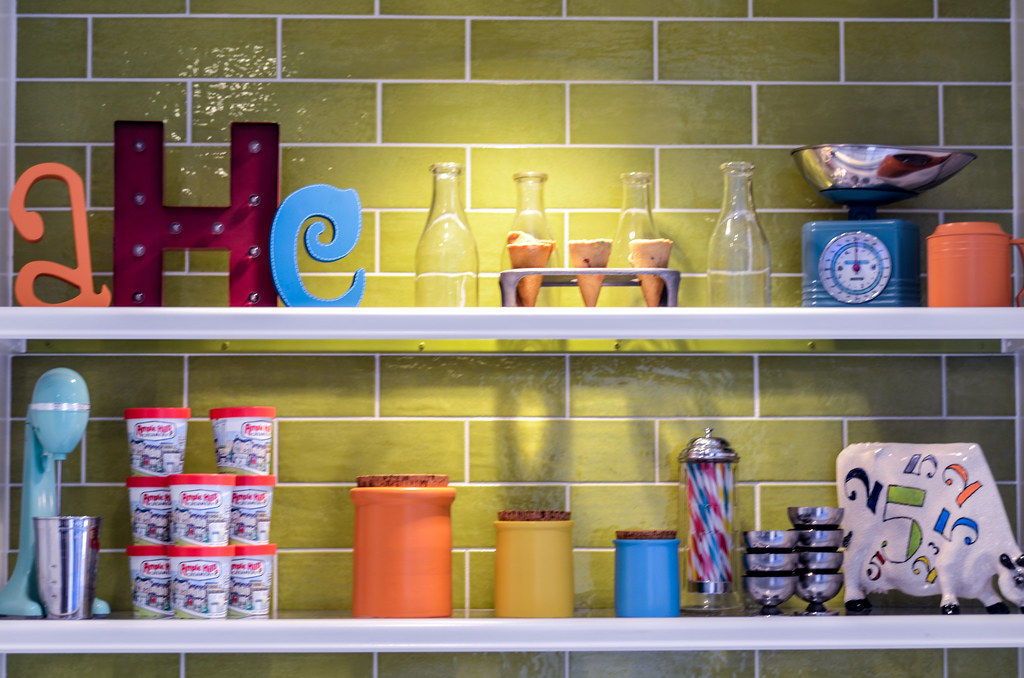 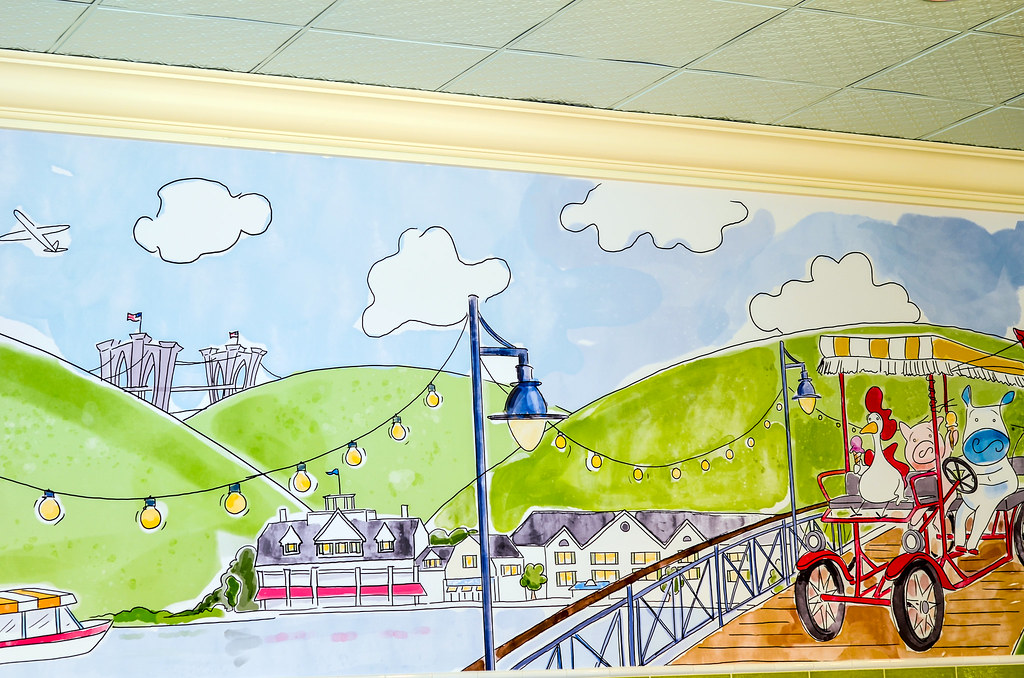 I especially like this mural, which is on the back wall of Ample Hills.  It, again, fits the Boardwalk theme while also paying homage to the shop’s beginnings in Brooklyn.

While the decor is great, I should mention that there isn’t any seating in the shop.  That leaves you to sit outside in the sun or make a run for the Boardwalk lobby before your ice cream melts.  As long as it’s not too hot, I recommend going for a seat right along the water.  If it is too hot, I unfortunately don’t really have any tips for you.  Hover around your ice cream inside without a table?  The aforementioned run to the Boardwalk lobby will probably melt some of your ice cream and be more unpleasant than rewarding.  Still, don’t let the lack of seating steer you away from Ample Hills. 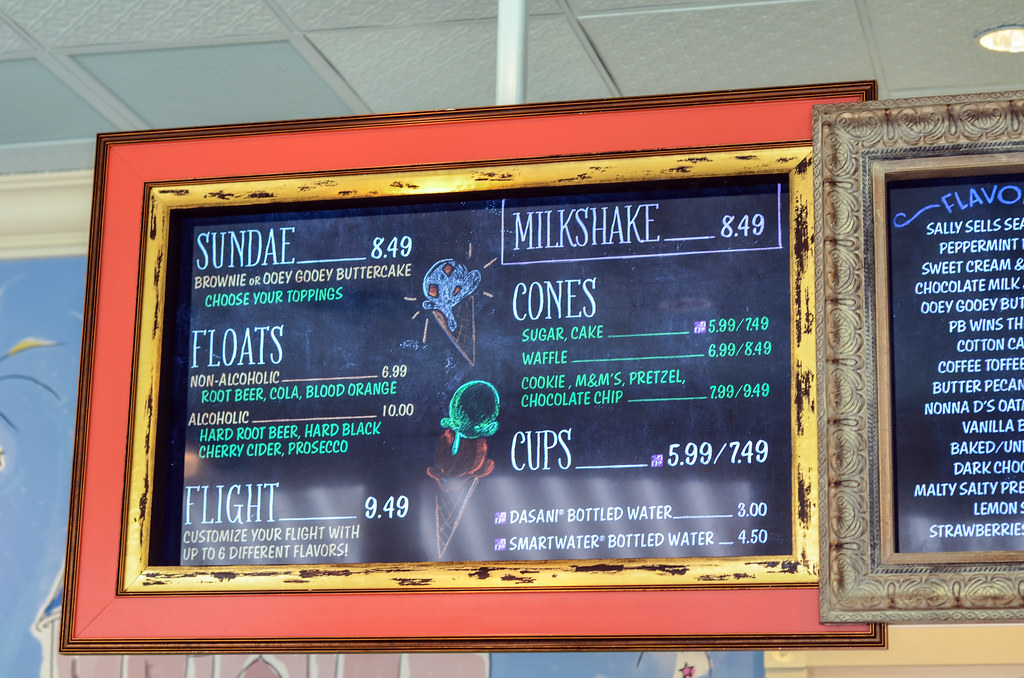 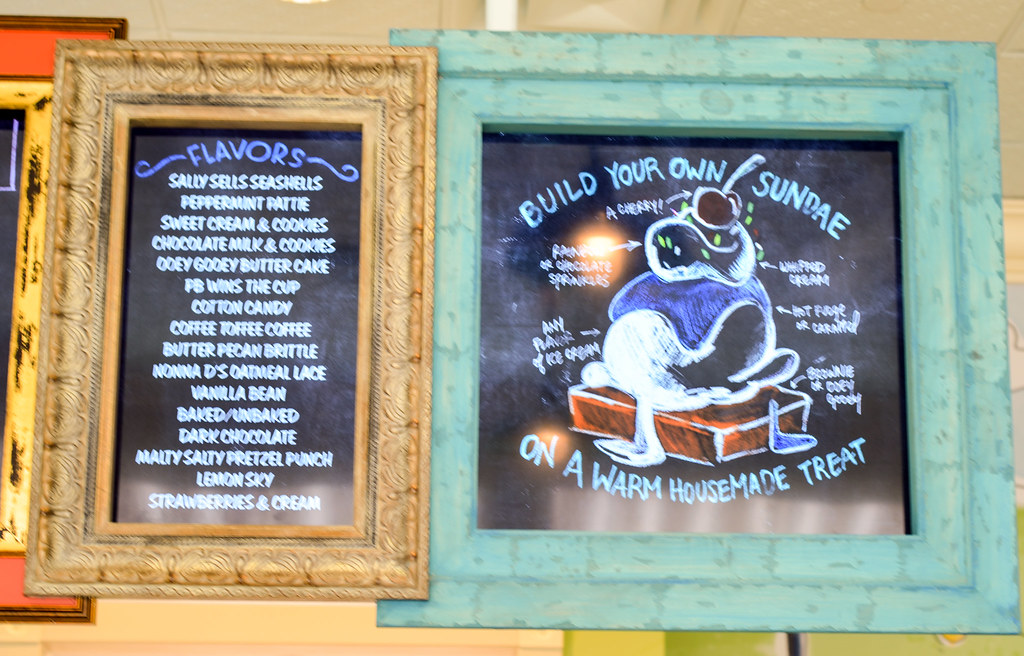 Ample Hills menus fit the home made sense that the rest of the ice cream shop has.  As for what’s on the menus, the top photo shows it pretty well.  Sundaes, floats, milkshakes, cones, cups and flights (more on those later) are all offered.  Here is a closer look at a menu if you want it.

Melissa and I went on this trip and ordered way too much ice cream.  We’ll start with the item we liked the best. 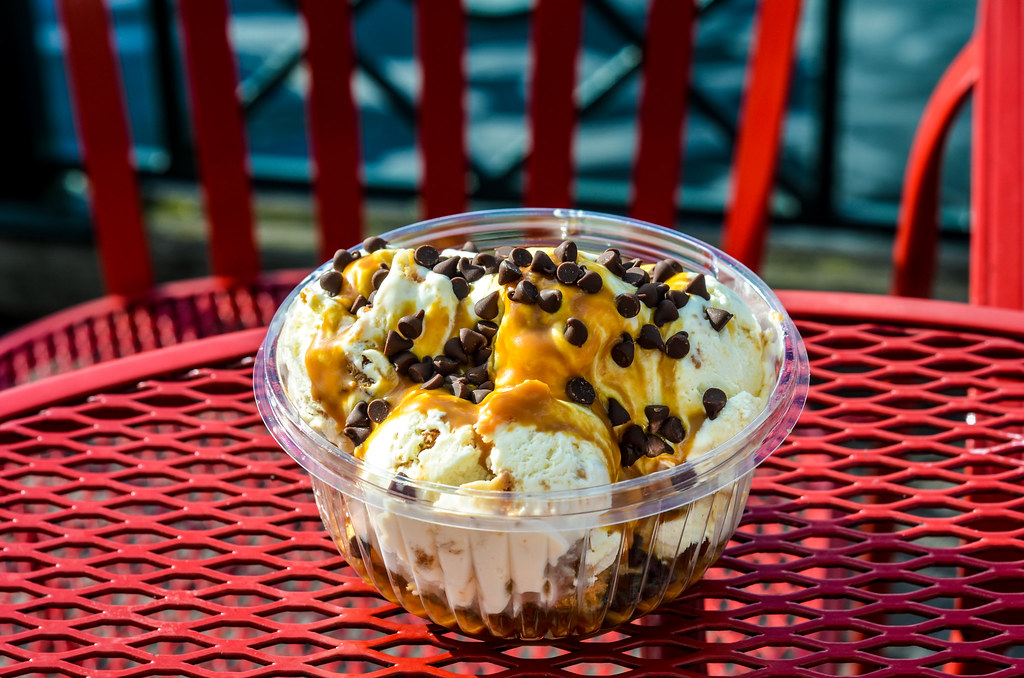 This was the Ample Hills sundae.  The bottom of the bowl is a piece of Ooey Gooey Butter Cake or a brownie.  You can choose any ice cream flavor (we went with the Ooey Gooey Butter Cake flavor, as well as the cake on the bottom).  We also had caramel syrup and chocolate chips on ours.  This was absolutely delicious.  The butter cake was delicious and added a nice texture to the sundae.  The ice cream flavor was the real star though.  Even if you don’t get the sundae, I’d definitely recommend this flavor.  The vanilla ice cream is very smooth and the cake mixed in adds a ton of flavor.  The ice cream is a bit rich and more filling than typical but well worth it.

The sundae is $8.49 which is obviously pretty expensive for ice cream.  Still, I don’t think this is incredibly overpriced relative to Disney prices.  There is at least three scoops of ice cream here, along with cake.  Not to mention, the quality of the dessert is fantastic.  This would be one of the better table-service restaurant desserts if served there, and those typically cost between 8 and 12 dollars.  With that in mind, the sundae falls right in line with that.  I should also say that the sundae is more than enough to feed two (or possibly three) people.  Or you could just eat it all yourself, no one is judging. 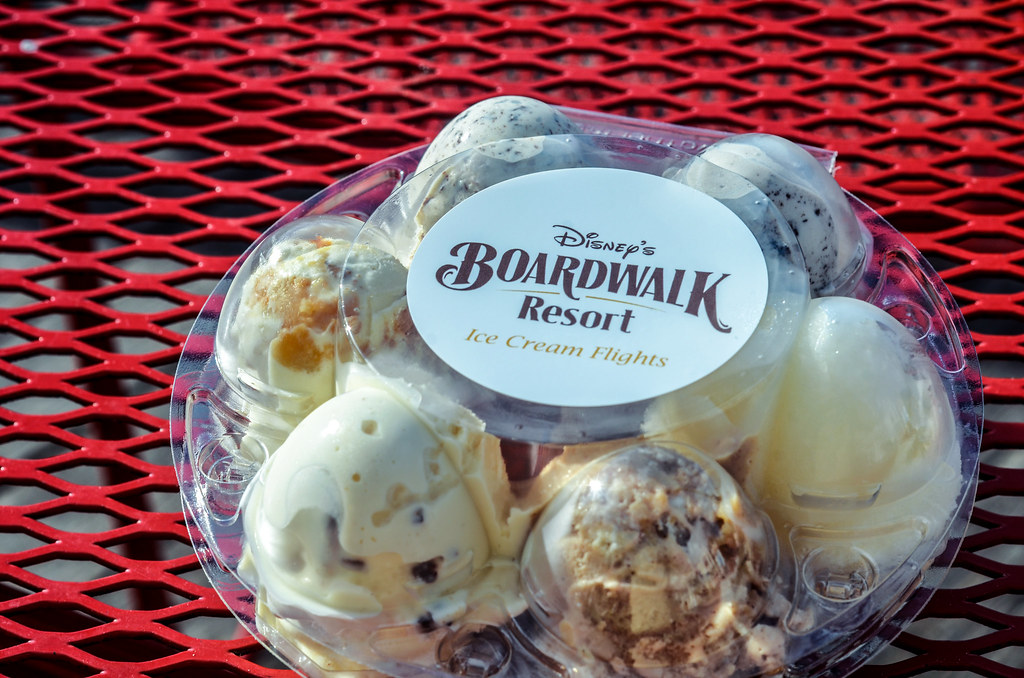 The other item we ordered was the ice cream flight.  This was six mini scoops of different flavors for $9.49.  I enjoyed the chance to get to try a bunch of different flavors.  I’m going to try and remember the different flavors we tried here and offer a quick review of each one, aside from the Ooey Gooey Butter Cake flavor because I already talked about it.  It’s amazing.

Lemon Sky – This was a very fresh sorbet but extremely tart.  If you love sour then you’ll enjoy this, otherwise I’d pass.
PB Wins the Cup – This is the peanut butter flavor.  I really liked it, although the peanut butter may eventually get a little overpowering if you had a bunch of it.
Sweet Cream N’ Cookies – This was good but not way better than a typical cookies and cream flavor.  While most other flavors felt pretty original, this didn’t as much.
Malty Salty Pretzel Punch – I enjoyed this one quite a bit.  It could have used a few more pretzels but overall I liked the taste.
Nonna D’s Oatmeal Lace – This was my second favorite outside of the Ooey Gooey flavor.  The cinnamon ice cream wasn’t very strong so it really played into the sweetness of the oatmeal cookies in the ice cream.

If you haven’t caught on yet, these choices are all ice cream flavors with stuff put in them.  With that being said, I think they were much more mixed in than at a Cold Stone or similar ice cream chain.  I would guess this is because Ample Hills prepares the flavors like this while the other chains mix them in on the spot?  Whatever the secret is, it makes the ice cream smooth and brimming with flavor. 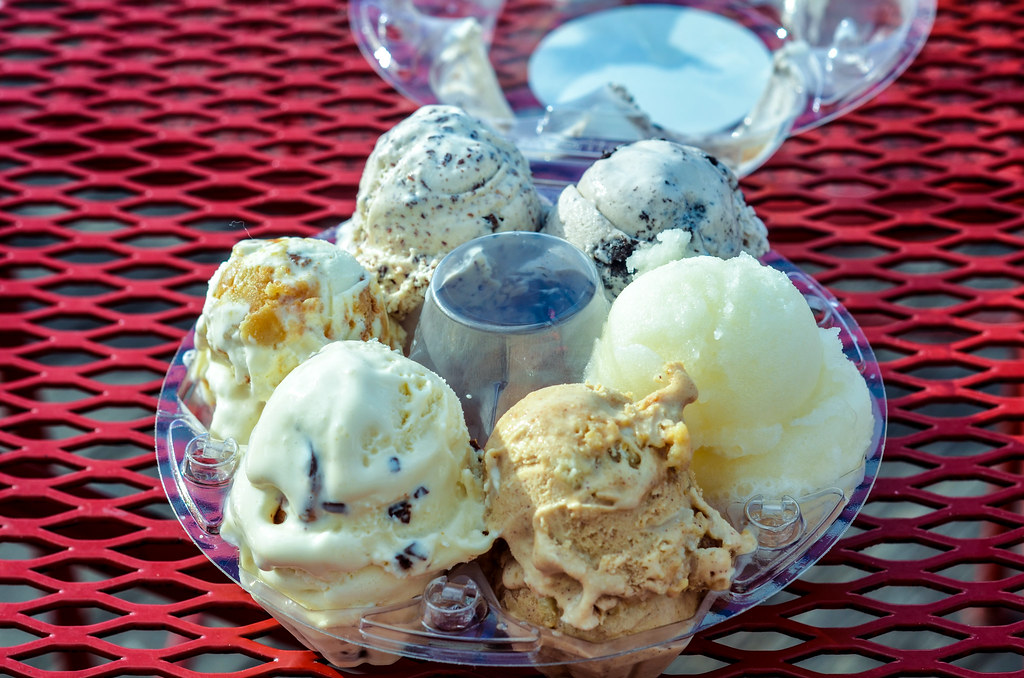 As far as the Ice Cream Flight goes, I wouldn’t go so far as to recommend it.  I think it’s a nice way to try a bunch of flavors and possibly to share with another person but I do think this is overpriced.  These mini scoops were about half the size of a usual scoop, meaning you’re getting 3 scoops of ice cream for about $10.  Sure, there are lots of flavors but I have a hard time justifying it being a worthy cost.  I’d definitely recommend the sundae over this option.

Of course, guests can get just a scoop of ice cream as well.  While we didn’t try one, Ample Hills does make their own cones and they looked quite tasty.  With that being said, a small is nearly $6.  While I think the ice cream here is probably the best on property, I don’t know if it’s much better than a $4.69 scoop of ice cream you can get at L’Artisan des Glaces which is a short walk away from Ample Hills.  Now, that’s basically a dollar less and in the grand scheme of things a dollar isn’t much.  But all this to say, I’m not sure if Ample Hills is a good value even if the ice cream is delicious. 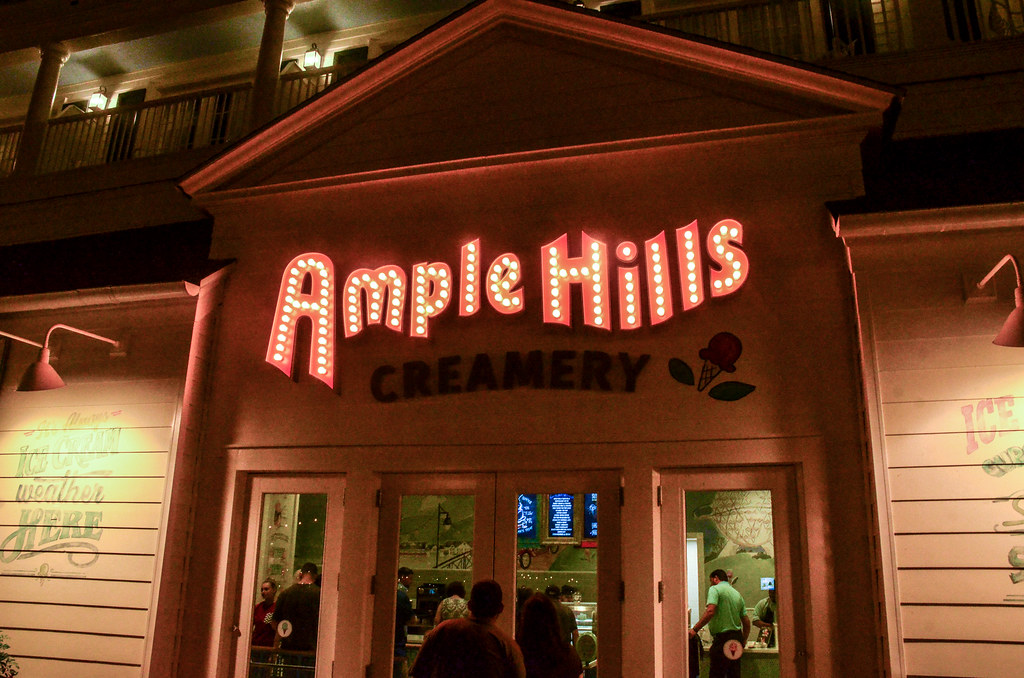 I would recommend trying Ample Hills at least once to see what you think and I’d highly recommend getting the sundae, as it’s the best value on the menu.  The Ooey Gooey Butter Cake ice cream is one of the best tasting things on property, in our opinion, and is quickly turning into a Walt Disney World rite of passage.  Soon enough, Ample Hills will most likely be mentioned with the likes of Dole Whips, Kitchen Sinks, and Citrus Swirls when talking about Disney World desserts.