This summer, the Aladdin stage show at Disney California Adventure gave way to Frozen.  I was recently able to view the show and this post will cover my review, thoughts and a few tips about Frozen – Live at the Hyperion. 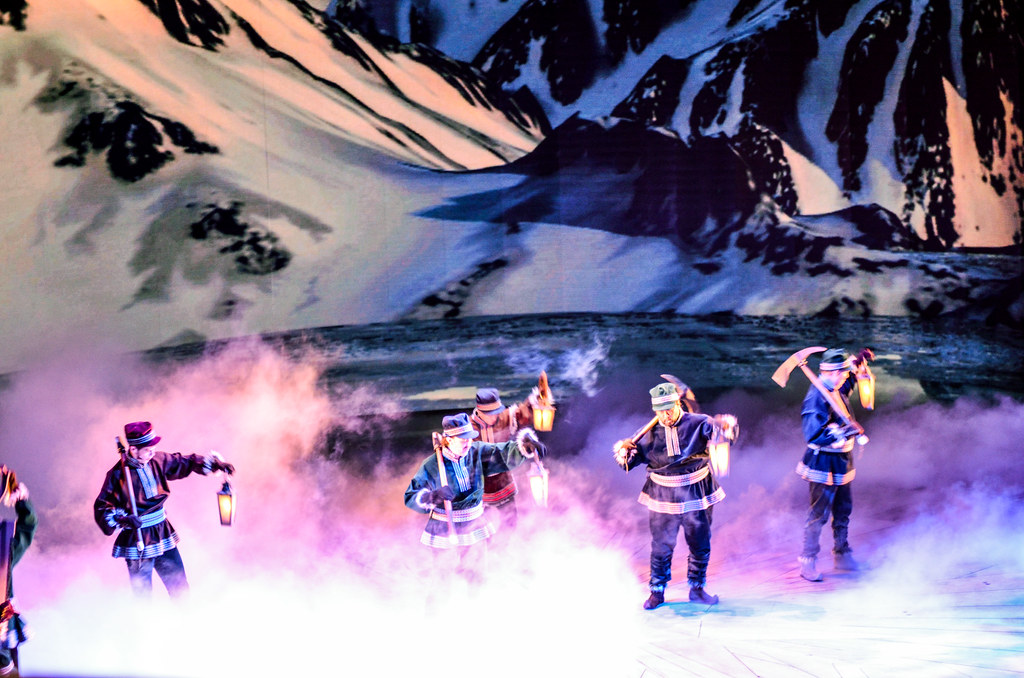 I’ll start off by saying that I loved the Aladdin production that they put on at DCA.  The show was really well done and was a nice ode to a classic Disney film.  It’s a shame that all the parks now have to remember Aladdin is a bad spinner ride and a few parade floats (unless I’m forgetting something obvious.) I’ll miss the show, as it was a great retelling of the movie but still felt fresh and new.  With that being said, I wasn’t very sad to see it go.

Aladdin had a nice run at the Hyperion Theater for roughly 13 years.  Since it was so well done, the show never got old.  But, stage shows like that aren’t meant to go on forever.  Typically, I think stage shows should last around 5 years before being swapped out.  There are great ones, like Aladdin, that can live on for a decade or so but even those can get a little long in the tooth.  For example, Beauty and the Beast in Disney’s Hollywood Studios has grown stale for me, even though I love the film and think the production value of that show is decent.

All that to say, I think Disney made the right move to steer away from Aladdin.  I’ll miss it but I was ready for something fresh.  Now, whether we can call Frozen ‘fresh’ is an entirely different topic.  While I may have been more excited to see a production of a different Disney film, Frozen was an obvious choice that turned out to be the right one.

We had mezzanine tickets for our early afternoon showing of Frozen and I thought the mezzanine gave us a nice view.  There really isn’t a bad seat in the Hyperion Theater, as it’s small enough to not put off any guests.  Even before the show started I was blown away with the projections they did as a backdrop.  The theater went through some serious upgrades before Frozen debuted which made the technical side of this show jaw-dropping.  More on that later.

Almost all of the classic Disney animated films are musicals to a degree.  Frozen is truly laid out like a musical though, while others just have songs throughout.  Frozen has overtures and a wide array of orchestration.  The musical side of it has always reminded me of the Broadway hit Wicked, both having show stopping songs in the middle (Let It Go and Defying Gravity) as well as other similarities.  This made the show an exceptional choice for a stage performance.  Even with having to cut off about 45 minutes of the movies run time, Frozen Live at The Hyperion covered every plot point and used nearly every song.

If you didn’t figure this out already, this is going to be a pretty positive review.  Let’s get the negatives out-of-the-way… I didn’t love Anna’s character as I thought the script (and possibly the actress, although that’s speculation) made her a little over the top.  She was louder, goofier and perhaps a little dumber than she was in the film.  I understand why they did this, as she’s in practically the whole performance and has to be used as comic relief when Olaf isn’t around.  Still, I think they overdid it in parts.  I’ve talked to several others who disagree with me but, hey, they can get their own Disney blog and write about this 😉 Another sticking point was that I didn’t love the choreography.  Big Broadway productions tend to have a huge dance moment and I thought that type of moment could have brought a unique element to the stage show that the movie didn’t have.  Admittedly, I’m way out of my league when talking about choreography.  I just didn’t think the movement or dancing was memorable.

Those are the only two complaints I had.  The show flowed extremely well.  The cast was Broadway caliber.  The music was fantastic.  My two favorite aspects of the show get their own paragraphs… 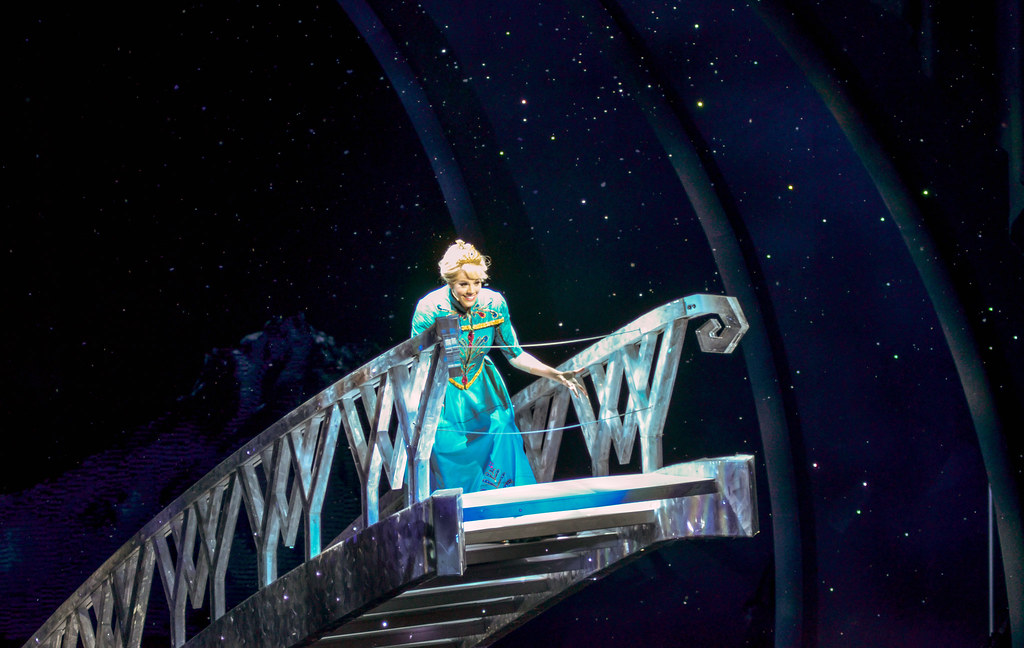 I briefly touched on this but the technology was fantastic.  Mainly the projections were what stood out.  Some people may complain that Disney was a little heavy-handed in using the projections instead of sets but they looked so good that I didn’t care.  They projected costumes on to people.  I’ve never heard of that done before and this show pulled it off seamlessly.  Just as Disneyland Forever was a technical marvel, this show takes everything they’ve mastered with projections and used it.  That also makes me excited for the future when they could use this technology on rides.

My other favorite part of the show was the use of puppets.  Both Sven and Olaf are puppets where you can see the real life actors controlling them.  Friends and family know that the 4th love of my life is The Muppets and I’m a sucker for anything puppet related.  If you haven’t seen this but have been to Animal Kingdom think of these puppets as what you’d see in Finding Nemo the Musical (or just look at the picture of Olaf below.)  While it’s clear that Disney was on top of their game technology wise, I love that they decided puppets were the way to go with these characters.  Granted, the puppets looked fantastic but the puppeteers/performers controlling them gave the show an extra boost.  I think the simple use of puppets combined with the use of projections gives the show a more balanced look. 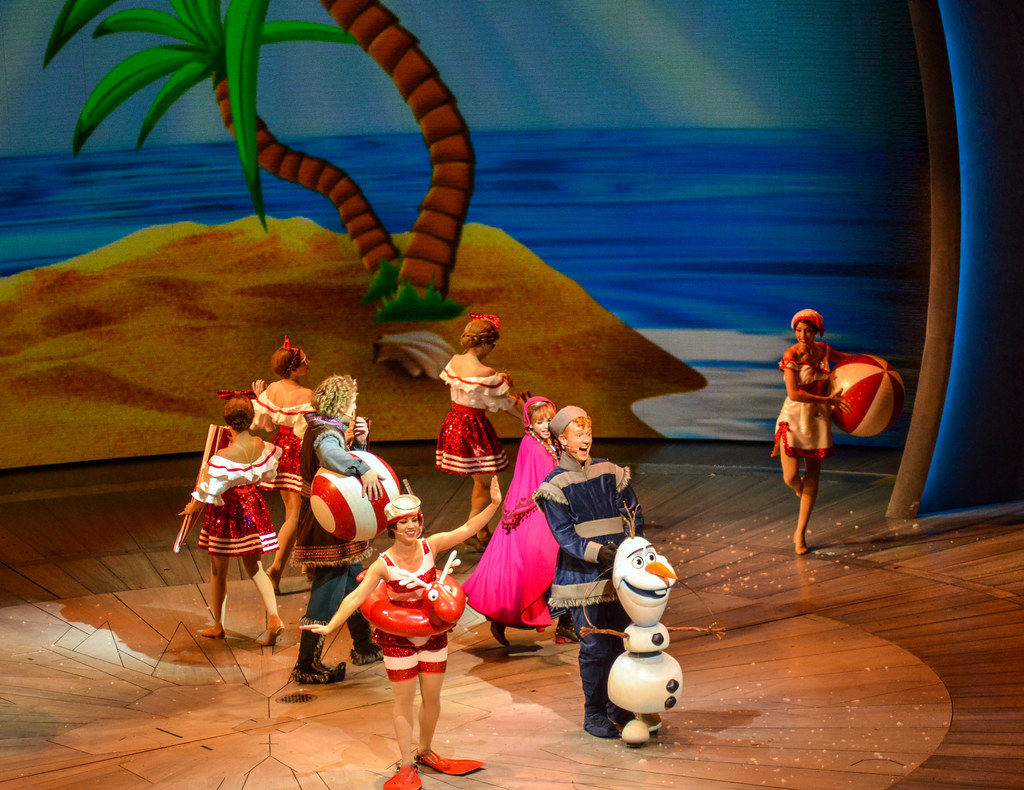 I’m trying to write this review without spoiling any of the big moments.  There were definitely quite a few of them.  Aladdin saw its stars fly around the theater on a magic carpet and while nothing in this show gets quite that big, there are some outstanding moments.

The show I went to, which was the first show of the day, was completely packed.  We went over to the theater at park opening to get FastPasses and the line was very long.  There will certainly be less crowds for the later shows, so if you don’t mind going later I’d recommend that.  The workers there also told us to show up to the theater at least half an hour before the show started, even with FastPasses.  We did that and I definitely wouldn’t have wanted to be any later.  While it was a pain to wait out in the hot sun, the line was already pretty long.  With a FastPass your section is predetermined but once in that section it is general admission.  The earlier you arrive, the better your seat will be.  Like any stage show, I’d recommend the middle of your section and close to the front row.  The last piece of advice I’d offer is to definitely get a FastPass for the show.  Like World of Color, this doesn’t prohibit you from getting another FastPass immediately and it will guarantee you a seat at the show.  Again, show up later if you want a later showing.  When we were waiting for FastPasses, Cast Members were very helpful in telling people an estimated time to come back if they wanted a FastPass for a different show.  Don’t be afraid to ask for help, as that’s what the CM’s are there for.

Overall, I couldn’t rate this show highly enough.  I think it’s a top-5 experience at Disney California Adventure and is definitely worth your time even though it’s an hour-long.  The easy question to ask is, ‘Was Frozen Live better than the Aladdin show that preceded it?’  I’ve thought about that a lot since I saw this and I still don’t have an answer.  I’m fond of Aladdin due to nostalgia, the actors performances and how much I like the film.  Without a doubt, Frozen kicks things up a notch on the technical side.  I don’t think one’s better or worse than the other, they’re just different and they are both great. 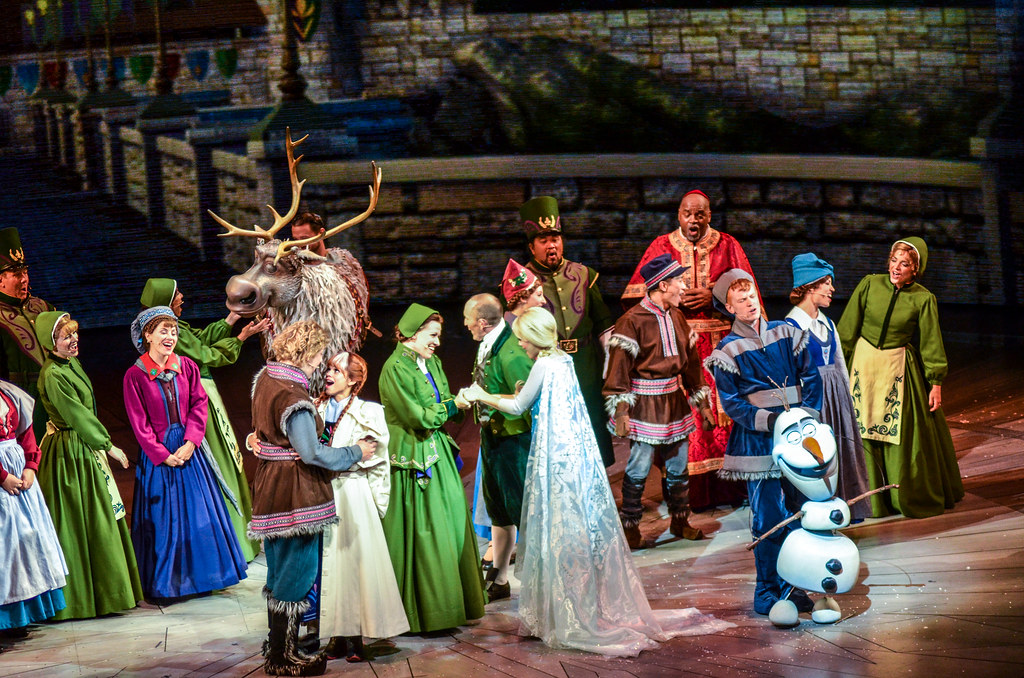 If you have any thoughts or questions about Frozen Live at The Hyperion (or any other Disney related topic) let me know in the comments and I’ll get back to you.  Thank you for reading Wandering in Disney!