When people hear about Disneyland or Disney World, they hear about the classic attractions.  Peter Pan’s Flight and Splash Mountain come to mind.  Maybe someone brings up Tower of Terror or Expedition Everest.  The classics are a classic for a reason, people generally like quality and that holds true for theme parks.  That doesn’t mean that some attractions aren’t overlooked though.  There’s plenty of quality at Disney Parks that doesn’t have hour-long lines or big crowds waiting outside of them.

For this post, I wanted to write about one attraction in each American Disney Park that I think is overlooked by park guests.  If you are looking for a place to escape the crowds while still experiencing something you shouldn’t miss, here’s a list for you.  We’ll start with the west coast and move east.

Tom Sawyer Island
Disneyland is a tricky one to start with.  All of the attractions are well-known and considered classics.  Tom Sawyer Island fits that mold but it is big enough so that you may not see anyone for a few minutes.  There is so much to explore here, from Smuggler’s Cove and the Capstan Wheel to Pioneer Cemetery.  Not only are the Disney details on full display but so is beautiful nature, as there seems to be running water just about every turn you take.  People overlook this Island because it may seem like a waste of time to walk around everything.  I strongly disagree with that, as I think looking all around Disney Parks is what it’s all about.

Honorable Mention:
Disneyland Railroad – As classic as Disney gets but you never have to wait long to get on.
Mark Twain Riverboat – A beautiful ride around the Rivers of America with great details on the boat.
Great Moments With Mr. Lincoln – A classic show that some may think is boring but I think is excellent.

Monsters Inc Mike & Sulley to the Rescue!
California Adventure is a strange park.  They have quite a few E-Ticket attractions (or at least D-Tickets) that get a ton of attention.  Then there are some smaller rides that are loved by most who ride (Mater’s Junkyard Jamboree).  It doesn’t seem that there is a ton that gets passed over that possesses a lot of quality.  That’s how I ended up on the Monsters Inc. ride.  Placed in an unfortunate back corner of the park, it seems that no one remembers that this attraction is here.  As far as the actual attraction, I can never make up my mind on it.  It’s not all that creative (just telling the Monsters Inc. story as you ride around in a taxi) but it’s fun and the animatronics look pretty good.  I’d rate it slightly above average but due to the lack of exposure, it’s a nice getaway at a ride you’ll probably enjoy.

Honorable Mention:
Animation Academy – Probably a better pick but Kelsee already wrote a post about this a while back so I’ll just let you read that instead.

Goofy’s Sky School – Some people like it, I don’t.  It’s in a strange location but still attracts decent sized lines.
Redwood Creek Challenge Trail – A beautiful area that has some physical challenges.

Tomorrowland Transit Authority People Mover
The People Mover is one of those attractions that make you feel like you are in on a secret club.  It seems like everyone in the Disney blogosphere appreciates it but there still never a line.  Located above everyone else in Tomorrowland, the People Mover takes you in and out of attractions while also giving you some beautiful views of Tomorrowland.  It’s the perfect place to take a little break while experiencing a quality attraction.

Honorable Mention:
Walt Disney’s Carousel of Progress – An old-fashioned attraction that may need an update but is still a classic.
Country Bear Jamboree – This came in a close second to the People Mover.  It would have been my choice if they hadn’t shortened the show.
Liberty Square Riverboat, Tom Sawyer Island, Walt Disney World Railraod – They have already been mentioned but they are quality attractions in the Magic Kingdom, as well.

Impressions de France
The films in World Showcase are often overlooked.  There are a lot of films to see and after one or two people don’t want to take the time to watch.  But, they should.  My favorite of these films is Impressions de France.  It’s quite possibly the most beautiful attraction in Disney World.  The score is wonderful and the cinematography is something you wouldn’t expect to find at a theme park.  There are a few film options in Epcot but this is definitely my favorite.

Honorable Mention:
Living with the Land – A quintessential Epcot attraction.  It has various levels of popularity but it’s pretty easy to find it with short lines.
The American Adventure – An amazing attraction but a little too popular to make the top bill on this list.

Journey Into Imagination With Figment – Not what it used to be but it still feels like a part of Epcot history.

Honorable Mention:
Muppet-Vision 3D – I love this attraction.  The show is pretty good.  The queue and pre-show are even better.

Maharajah Jungle Trek
This park doesn’t have many attractions either but the trails absolutely help make up for that.  Maharajah Jungle Trek is my favorite trail at Animal Kingdom, in case you didn’t see this post from Saturday.  This Trek tells a fantastic story while showing guests what the park is all about – animals.  The buildings are beautifully themed and designed and there isn’t a huge sense of crowding in this area.  This is a must for anyone who goes to the park.

Honorable Mention:
Conservation Station – While it’s not the most entertaining attraction, it’s educational and interesting.
Any other trail – You get it.  I really like trails.
The Boneyard – Yes, this is a playground.  Yes, I’m an adult.  Yes, I’ve walked around in it by myself while kids looked at me.  But, it’s incredibly themed and slightly makes up for the otherwise awful eyesore that is DinoLand U.S.A. 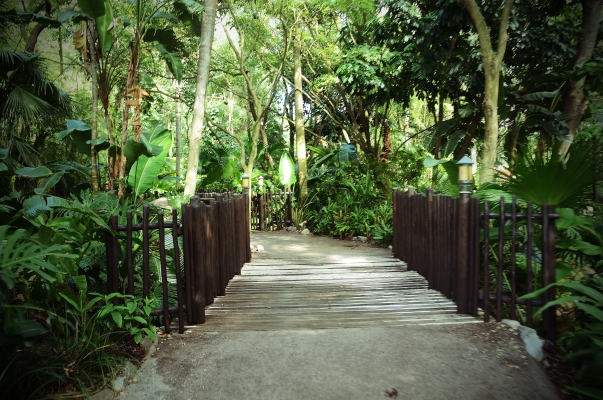 Of course, there are more overlooked attractions.  Let us know what some of your favorites are in the comments!  As always, thank you for reading and have a great day!