In 2014, a new day-time parade called ‘Festival of Fantasy’ premiered at the Magic Kingdom.  I was lucky enough to see the parade a few months later.

I guess I should start off by saying that I’m not a huge parade fan.  There are a few that I like, although most of those are at nighttime.  Mickey’s Soundsational Parade in Disneyland is fine by me, but nothing I’m dying to see when I go there.  Parades don’t interest me as much as they do other people.

With all that being said, Festival of Fantasy is very interesting.  As the name tries to portray, this parade has much imagination behind.  Festival of Fantasy takes a few themes (and even floats) from a former Tokyo Disneyland parade called ‘Jubilation!’ that ended in 2013.  The parade really does have a lot of imagination.  Some of the costumes in it, when seen outside of the context of the parade, might make you scratch your head.  But, truthfully, it felt like most of the costumes worked.

This is going to be mainly a picture post, with me adding in text about the pictures.  If you don’t want the parade spoiled (although a blog post doesn’t come anywhere close to seeing it in person), you may want to stop here.

The first of the floats to go by is a Princess Garden float.  There are several princesses and princes on this float and some beautiful flower arrangements.

The float itself might be the least creative of the bunch but it’s beautiful and a nice table-setter for what’s to come.  It’s also a good thematic way to see a group of the princesses. 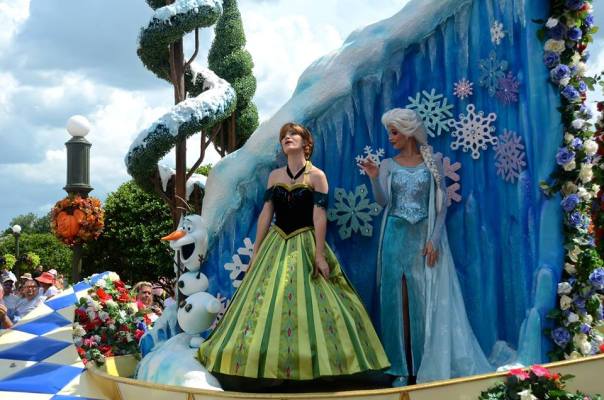 This guy serves as a prelude for what’s to come next.  Can anyone figure out what he’s from?  As always these characters are well done first in the costuming and then in their interactions with the crowd.

If you guessed Tangled then you still haven’t seen it as many times as my wife has got me to watch it.

The Tangled float provides a nice transition between the flower float at the beginning and to what’s to come. Rapunzel’s hair, as you can see above, is draped through the whole float with flowers throughout it.  Flynn Rider and Maximus are perched upon this, let’s call it an, anchor that swings back and forth.

These floats are pretty grand in scale and seeing the Tangled unit was our fist glimpse at that.

Shortly after Rapunzel came Ariel.  She was perched high above the ground (probably 20 feet or so) in a clam.  The Crystal Palace is in the background there.

Here’s a fuller look at the Little Mermaid float.  It’s very fun and, if you haven’t noticed yet, still full of color like all of the other floats.  Sebastian guiding the fish like a horse-drawn carriage is my favorite part of the float.  That is, aside from Ariel. 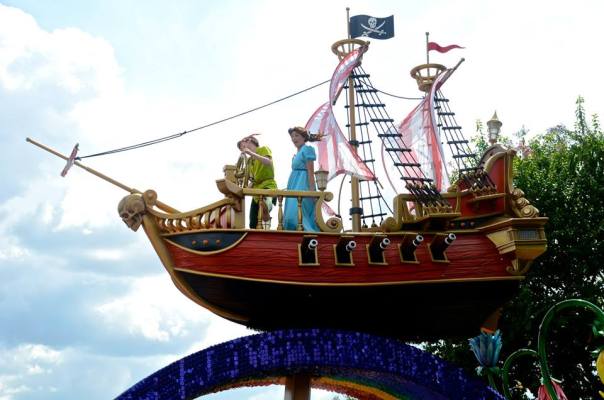 Next came the Peter Pan float.  Perched upon a rainbow, Peter Pan has commandeered (yes, I learned that word from Pirates of the Caribbean) from Captain Hook and has taken it for a flight.

This skull acts as the rainbows support.  This is the perfect example of why I like this parade quite a bit.  The skull is the perfect amount of weird, dark and whimsical. 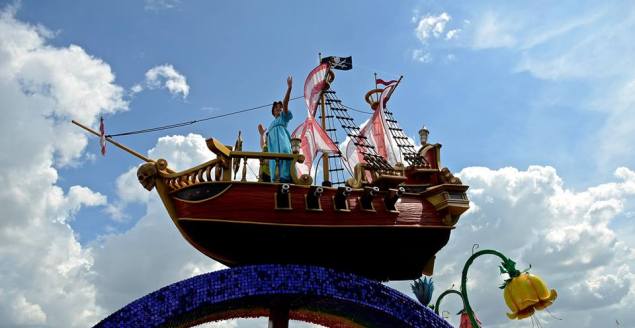 This is one of my favorite shots from the parade.  The float had moved right above me and really looks like it’s way up in the sky.  These floats are very tall and, if memory serves, this is the second tallest.

It’s always fun to catch the characters in pose.  Thankfully, considering my photography skills (or lack there of), it’s not hard.  If you haven’t guessed by now, this Peter Pan float was my favorite of the parade.  It’s stunning and has a lot of layers to it.

Following the float was this crocodile and Tinker Bell.  While they were secondary units, they were still pretty large in scale.

There is more space between the big floats than I’ve shown in this post but the crocodile and Tink are good examples of this.  With that being said, they were probably the most interesting of the ‘in-between floats’ entertainment. 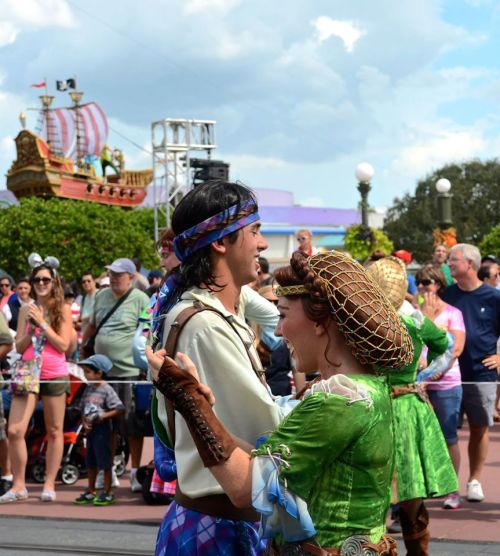 These dancers came after all of Peter Pan and were a prelude as to what’s to come.  You can also see the scale of the Peter Pan float in the background there. 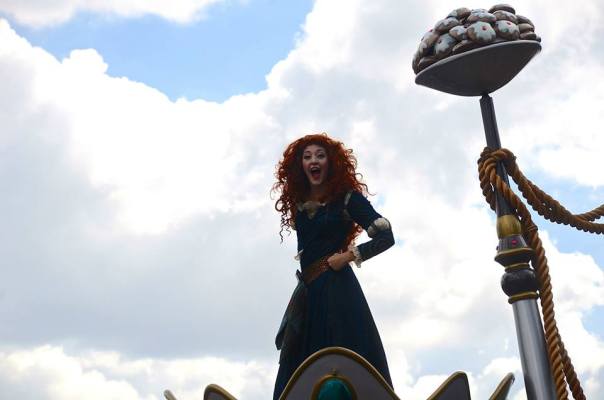 The dancers’ Irish costumes were a helpful hint as to what came next.  Merida arrived, high in the sky.  While I’m not a big fan of Brave, this float was pretty interesting.

The float is themed after bagpipes with Merida perched on top.  There are several other touches to it. I didn’t get a good shot of the base of it but it’s pink and green and almost resembles the shape of a heart.  You can kind of see it in the next photo.

Prince Phillip came next, along with some fairies.  I’m guessing he was here to slay something. 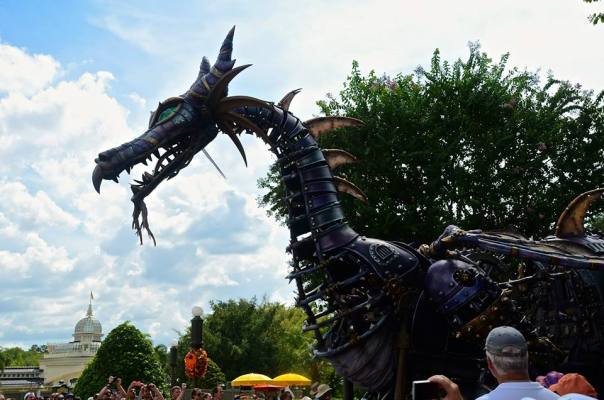 While the Peter Pan float may have been my favorite, Maleficent might be the grandest.  This dragon is huge and looks so interesting.  The guests can almost see inside of the dragon and how it’s made. 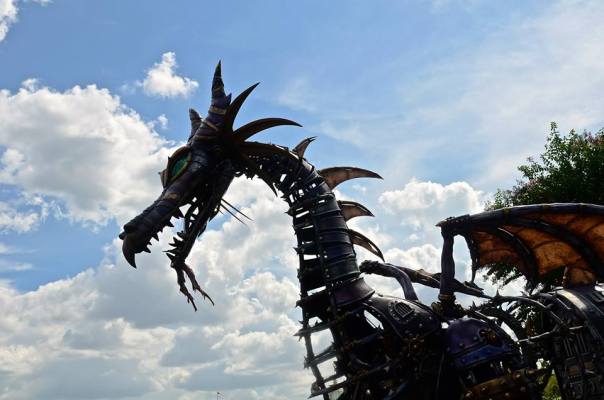 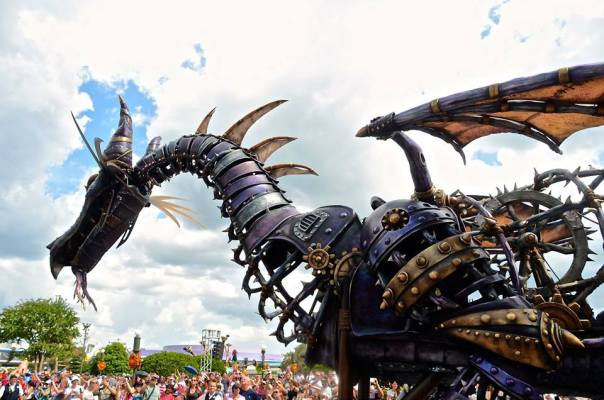 Maleficent could lower its head and get closer and closer to the guests.  The dragon also blew a smoke-like substance out of its nose.  You can kind of see the back of the dragon here.  It’s pretty interesting and, again, creative.

Following the dragon, there was a wide variety of characters.  I’m not positive how all of these characters fit together or why they are together.  Someone smarter than me could probably figure it out.  But, if you’re looking for knocks on themes that might be a slight one.

Now you see what I meant about the crazy outfits.

Next up came Pinocchio with a little bit of Dumbo thrown in.  On the top of the whale is a version of the circus seen in Dumbo.  It’s no mistake that this parade premiered around the same time that New Fantasyland reached completion. The floats really allude to the land and make you want to go there. 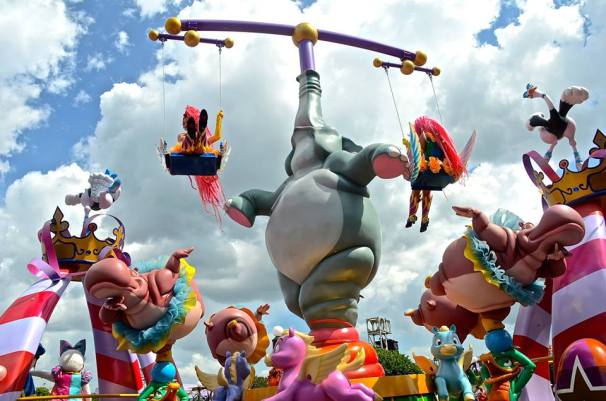 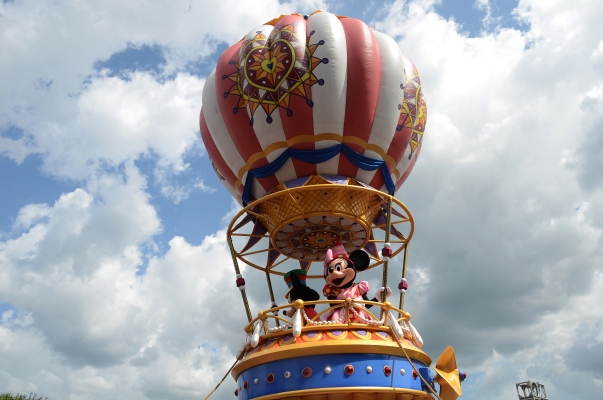 The final float in the parade was Mickey and Minnie in a hot air balloon.  I didn’t get any shots of it that I actually like. It is a fitting end to the parade, although not my favorite float.  Mickey and Minnie waving you goodbye from 20-feet in the air is fun and the float is colorful and matches the rest of the parade.

Overall, I really liked this parade.  The floats were fantastic and the characters in-between the floats were a lot of fun. The colors really pop and the costumes are imaginative.  Where the parade falls short is maybe in the lack of floats.  I think it could really use one or two more large floats. The parade feels a little bit incomplete.  What is there is of really high quality though. 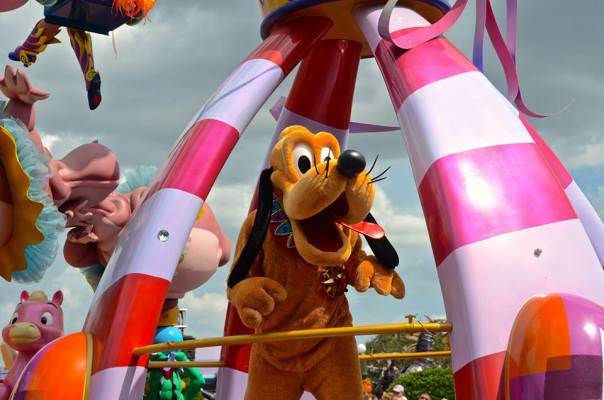 Let us know your thoughts on the parade and anything else Disney related in the comments!  Thanks for reading!