This summer, the Aladdin stage show at Disney California Adventure gave way to Frozen.  I was recently able to view the show and this post will cover my review, thoughts and a few tips about Frozen – Live at the Hyperion. I’ll start off by saying that I […] 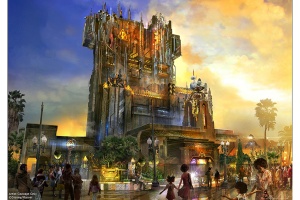 I’ll keep this fairly short since we wrote about this in our latest question of the week, but it was confirmed tonight that Guardians of the Galaxy – Mission: Breakout will be taking over the Tower of Terror attraction in California Adventure (it will not be in Disney World, […]

I was recently asked the question, “If you could do anything you wanted in the U.S. Disney Parks for 48 hours, what would you do?” I answered, “I’d tell you but then I’d be robbing my loyal readers of a fantastic blog post.” Well, maybe that’s not how […]

Every other week our writers get together and answer a Disney-related question, then discuss it.  Here is this week’s question and answers. Question of the Week: What is your go to counter-service restaurant that you recommend on any Disney trip? Name as may as you’d like! Andrew – I think […]

Every few weeks our writers get together and discuss a Disney related question.  Here is this week’s question and answers! Question of the Week: What do you think of ride overlays? There have been a few rumors floating around about an overlay of Tower of Terror in DCA, as […]

We have a guest post today as I recently had some family go to Disneyland.  My brother Matthew was kind enough to answer some questions and send us a trip review.  Enjoy! How many people were in your group and how long was your trip? My in-laws surprised […]

Every week our writers get together and answer a Disney-related question.  Here is this week’s question and answers, leave your answers in the comments! Question of the Week: What is your favorite ‘streetmosphere’ entertainment or small show (Dapper Dans, Flag retreat, Epcot pavilion performers, etc.) at a Disney Park? […]

As you may or may not have heard, January 10th marked the ending of Disney’s Aladdin, a Musical Spectacular at Disney’s California Adventure. While it is always sad to see a show/attraction leaving the parks, I know that Aladdin’s departure will make way for new and exciting changes […]

Editor’s Note:  It’s our 1 year anniversary here on Wandering in Disney.  We’ve had so much fun seeing the blog grow over the last year.  My sincerest thanks go out to our writers, Cassie, Kelsee, Leslie, Melissa H., and Melissa L.  Of course, writing isn’t nearly as much […]