Leslie’s Return From Neverland: An Update on Leslie’s Life as a Cast Member

I shall preface this post with an apology; I have been absent from the blog for far too long. It has taken some settling into Disney. Where to start? What to write? Well I suppose life so far. Disney has been amazing, Traditions and Casting are pretty much […]

Two weeks ago I was in SeaTac Airport waiting to catch my plane bound for Orange County, California. To me, two weeks feels like an eternity. Our trip had been in the planning process for a long time, so by the time we got to the airport, anticipation […] 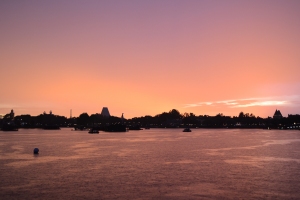 A Snacking Guide To World Showcase

World Showcase is one of Walt Disney World’s greatest achievements.  The amount of culture and detail crammed into the eleven different pavilions is astounding (even if Frozen is on the verge of invading).  While exploring some of these wonderful pavilions, a guest gets hungry.  Very hungry.  Lucky enough, […]

Every Sunday all of our writers get together and answer a Disney related question. Here’s this week’s question and responses: Question of the Week: Congratulations! You’ve been appointed the head imagineer of a new theme park Disney is building in either of Disney World or Disneyland. You get […]

Before Disneyland opened in 1955, theme parks didn’t exist.  There were carnivals, circuses, and amusement parks but Walt Disney brought us the first theme park.  What’s the difference?  A theme park is more than just a collection of rides and shows.  A theme park has attractions that tell […]

Every Sunday all of our writers get together and answer a Disney related question. Here’s this week’s question and responses: Question of the Week:  In honor of Leslie, the question of the week is: if you could be any Disney employee what would it be? If you pick […]

One of our wonderful readers sent us some questions!  Instead of answering privately, they seemed like questions that everyone might have an interest in.  While some of them are a little bit specific, there are some general questions that should be of interest.  The questions are in bold […]

Melissa H. is on her way to Disneyland later tonight, so she answered a few questions for us about her trip.  We’ll be doing this before most trips that any of us take.  If you have certain questions that you would like to see asked on this type […]

Five Relaxing Activities Outside of the Parks at Disney World

It’s no secret that going to Disney World (or Disneyland for that matter) isn’t a typical, relaxing vacation.  While having a blast at Disney World, guests usually walk 10-15 miles a day.  Along with that walking, guests will typically be in warmer than usual temperatures.  I haven’t even […]

Happy Super Bowl Sunday and go Hawks! Every Sunday all of our writers get together and answer a Disney related question. Here’s this week’s question and responses.  Before we get to the question, here’s a quick primer on what we’re talking about if you didn’t already read about […]

Ways to Save on Your Next Disney Trip

Hello everyone and nice to “see” you all again. I feel that I owe everyone an apology for missing out on the action here at Wandering in Disney lately. In all honesty, things have been a little busy with preparing to leave on my Disney vacation in just […]