Harambe Market is a counter-service restaurant at Disney’s Animal Kingdom. It is located in the Africa section of the park. They serve African-inspired fare, in the form of spiced meats and somewhat authentic salads. This area was built on a piece of land that was previously unused and opened in 2015. In this post, we’ll review the restaurant’s atmosphere, cuisine and value!. 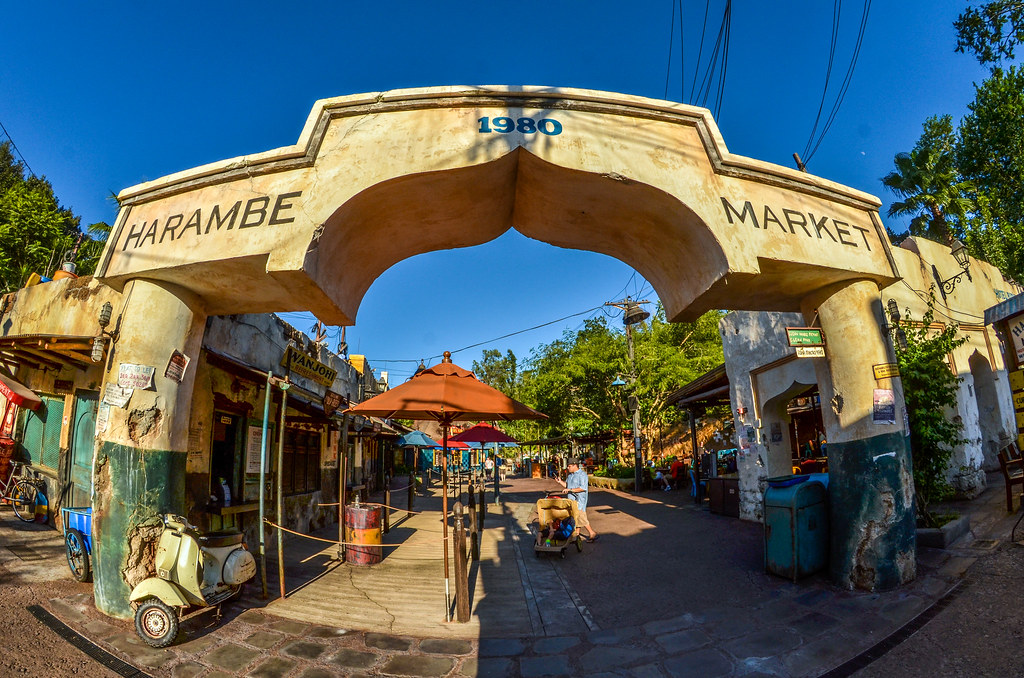 I’ve raved about Animal Kingdom’s details since this blog started and Harambe Market only improves upon that. The aesthetics in this area closely match those of the Harambe that previously existed. Having a street market aesthetic next to the village of Harambe doesn’t detract from the lived-in feel of the town, if anything it extends the feeling. 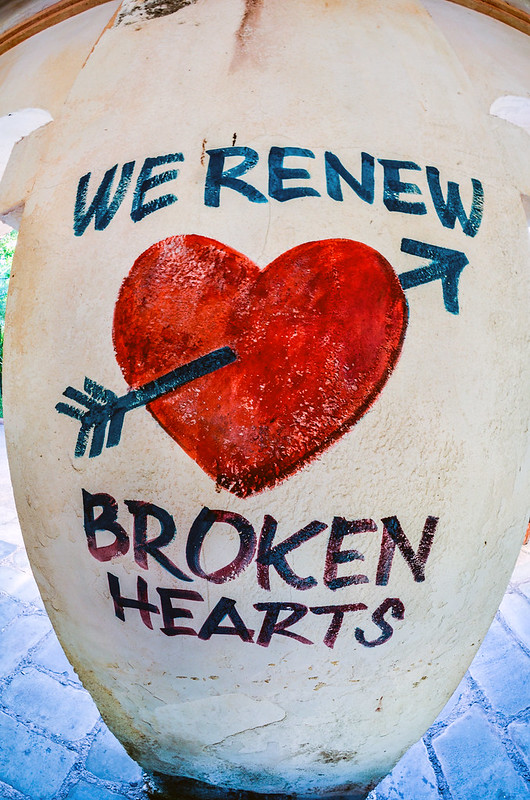 There is beautiful artwork throughout the seating area. Despite the somewhat run-down look (which is completely intentional) this artwork and the messages bring hope and spirit to the area. There is some seating in shade if you eat here during lunch hours, but it is all open air. 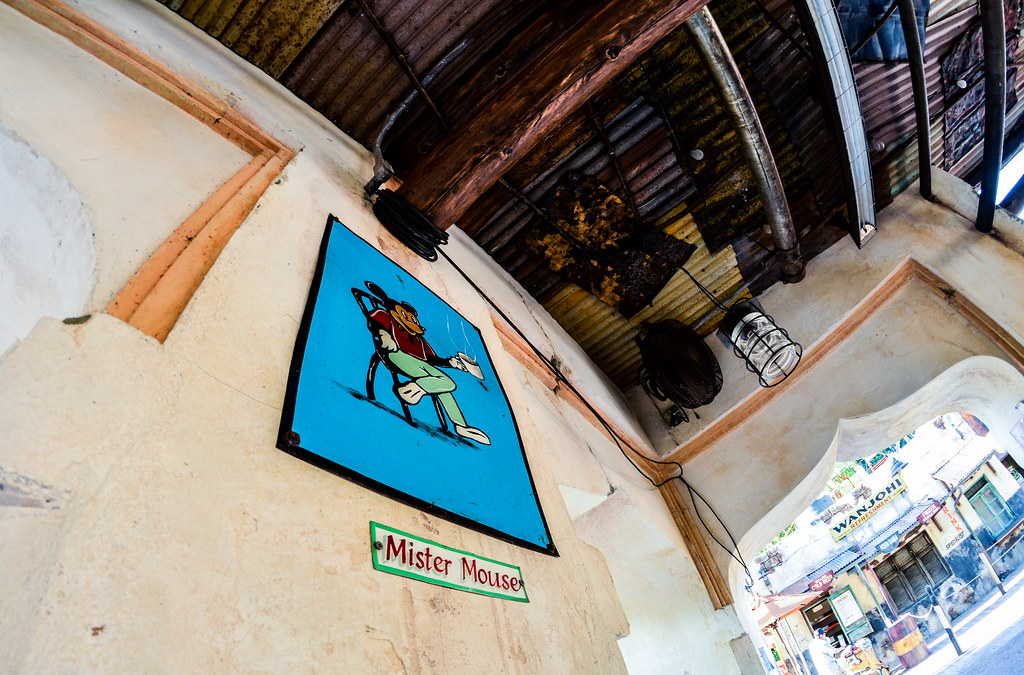 The area directly outside of Harambe Market used to have live entertainment, mostly in the evening. I hope that this live entertainment returns, even though this isn’t a high traffic area. It added to an already wonderful ambiance that this area has. Having live entertainment available in areas where there wouldn’t normally be crowds may help spread some people out but the stage in the village area is used much more. Probably for good reason, as that’s an easy place to draw people in. 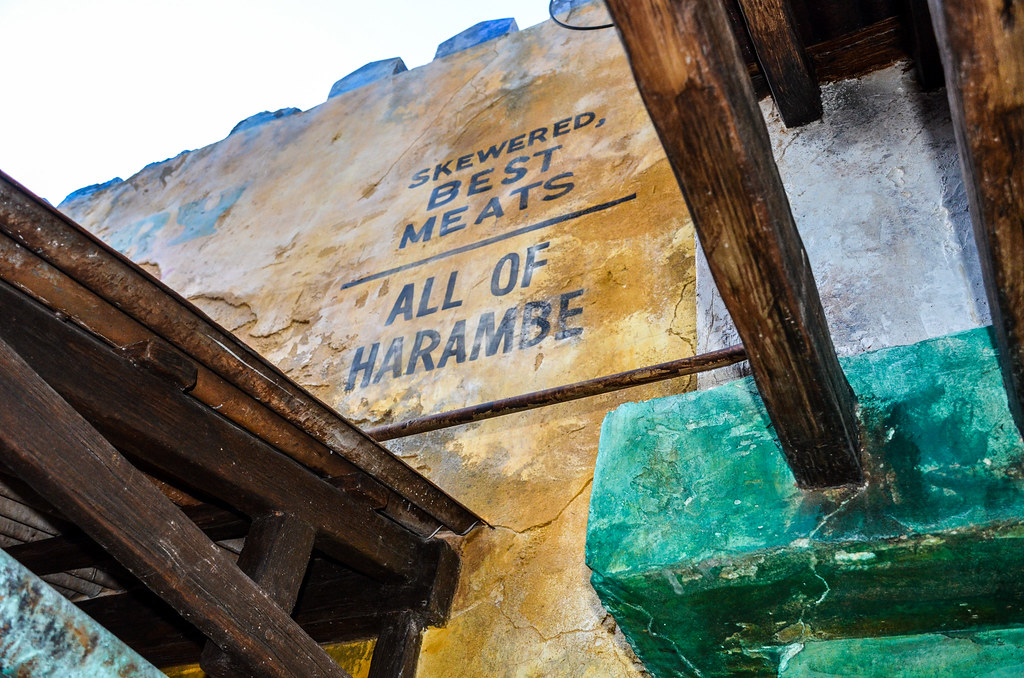 Harambe Market is set up is with 4 counters. Each says they sell something different, in reality most of them sell all of the items available. The one exception is that the beverage counter is the only place to get select beverages. Here is the menu for Harambe Market. That menu has changed over the years and you’ll be able to read some of our thoughts on dishes that aren’t currently served towards the bottom of the post. Hopefully, the restaurant will bring some back over time and diversifies the menu some. 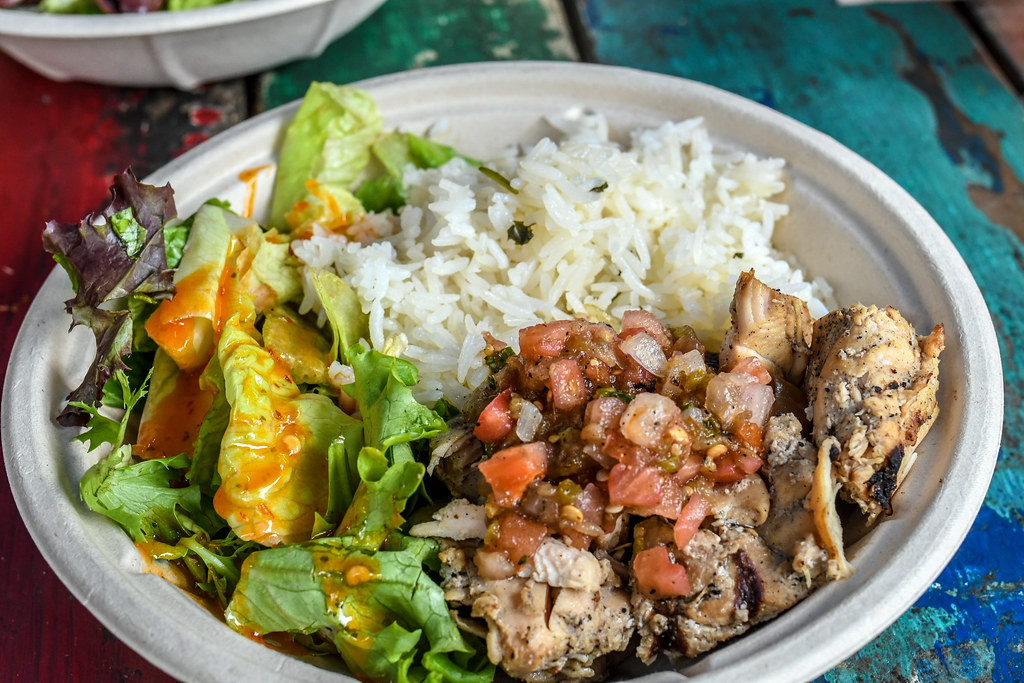 As for things that are currently on the menu, this is the Grilled Chicken Bowl. This consists of Cilantro Rice and Mixed Greens Bowl served with Grilled Chicken topped with Salsa. There isn’t a lot of complexity here but all of the flavors are good, especially the chicken, which was juicy and seasoned well. I did like the addition of the greens. The salsa added a little depth of flavor to an otherwise common dish. At $12.49, this was filling and a good amount of food or the price. I wouldn’t put it on par with the bowls at Satu’li Canteen but it’s a good option. 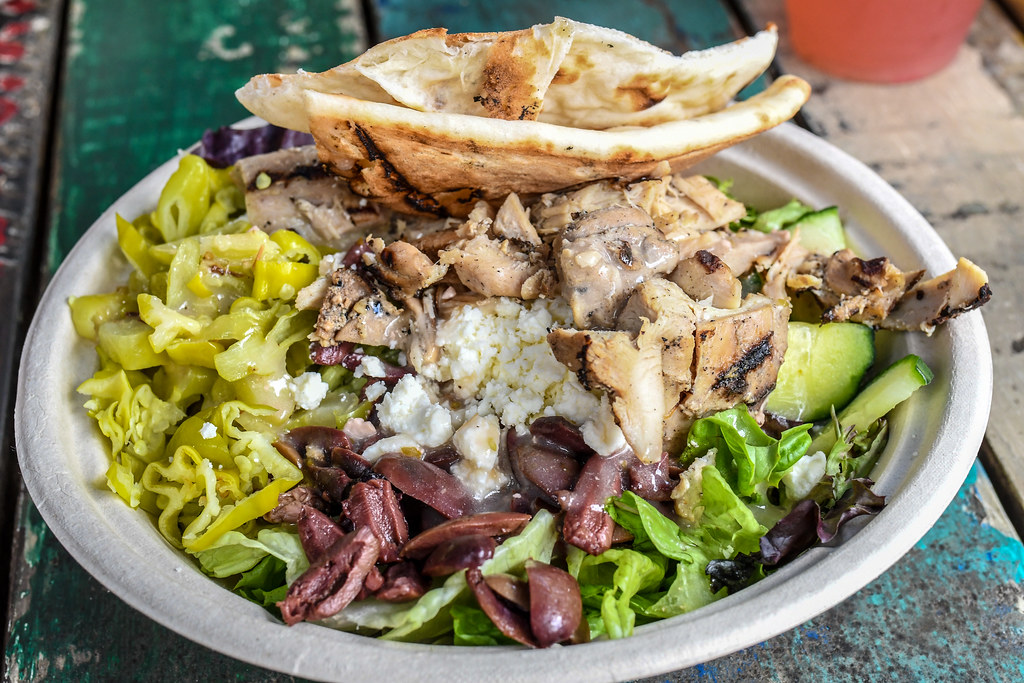 We’ve also tried the Harambe Salad with Chicken which is a Mediterranean-influenced Salad with Pepperoncini, Kalamata Olives, Cucumber, Tomato, and Feta served with Grilled Chicken with Greek-style Vinaigrette Dressing. My recommendation comes down to whether or not you like Mediterranean Salads or not. If you do, this was a strong representation of one with lots of flavor and zest. I’d put it above most other counter-service salads I’ve had. The chicken seemed to be the same as what was served in the bowl and that’s a good thing. This comes in at $11.99 which may be slightly high but there’s a lot going on in the salad. If you’re looking for a green option at Disney World, this is a good choice.

Below are some options that Disney doesn’t currently offer at Harambe Market but we hope come back! 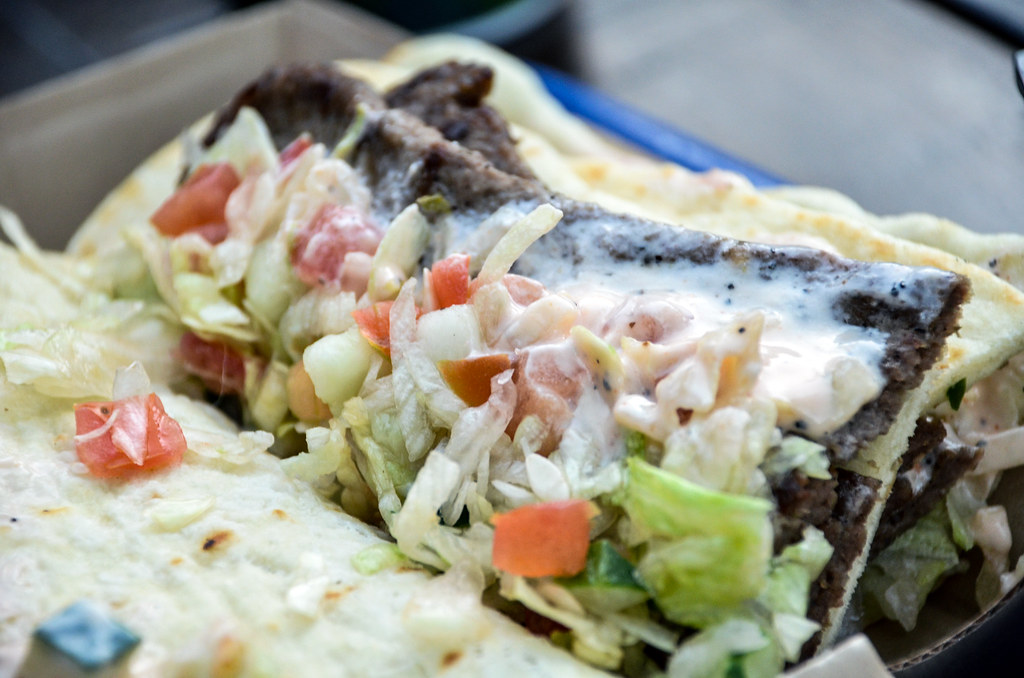 Here’s a look at the Beef Gyro. The meat was delicious and had a great seasoning on it. There’s no doubt that Disney can at times cut back on risks and avoid some of the more interesting seasonings. That’s not the case here, the beef was cooked to perfection and was the main taste in the gyro. If the beef was the main taste here the sauce was second in command, being a nice sidekick. While I think it was a little thinner than Tzatziki Sauces, it definitely had a similar flavor. Overall, I thought this dish was a very solid entrée. 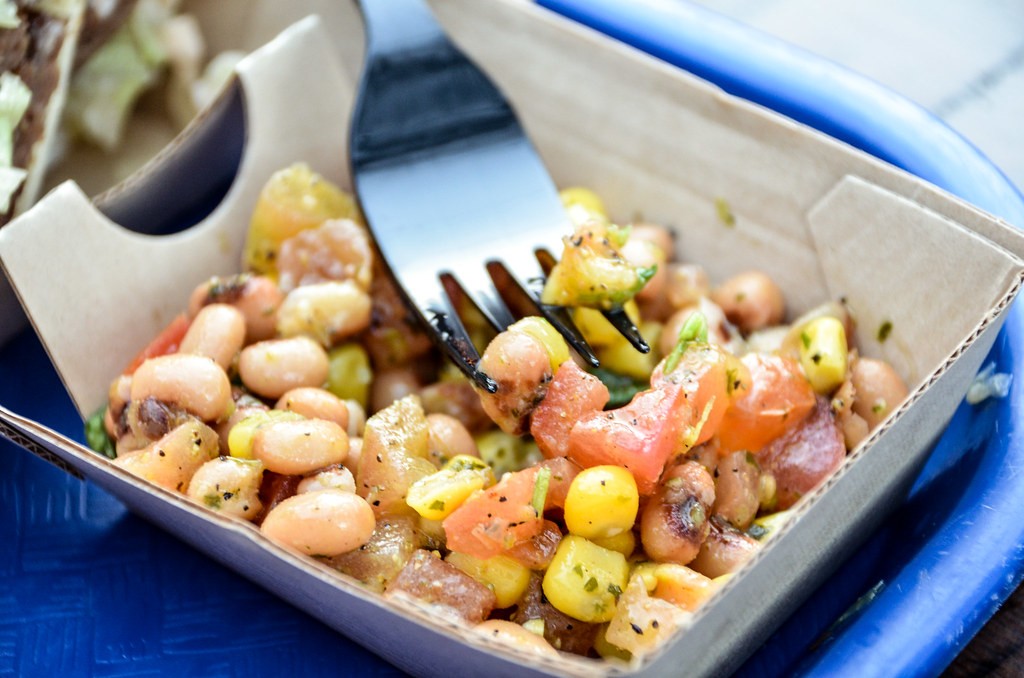 Moving on to the secondary options, the gyro came with a black-eyed pea salad and a green papaya slaw. The salad (pictured above) was decent and different. I don’t love beans so I can’t judge this all that fairly. With that being said, I thought this blended a few nice flavors. The dish was fairly sweet and refreshing. The slaw was delicious and also somewhat sweet. It did have a bit of a spice to it, so if you’re not a fan of that then this might not be for you. I, for one, loved the slaw. 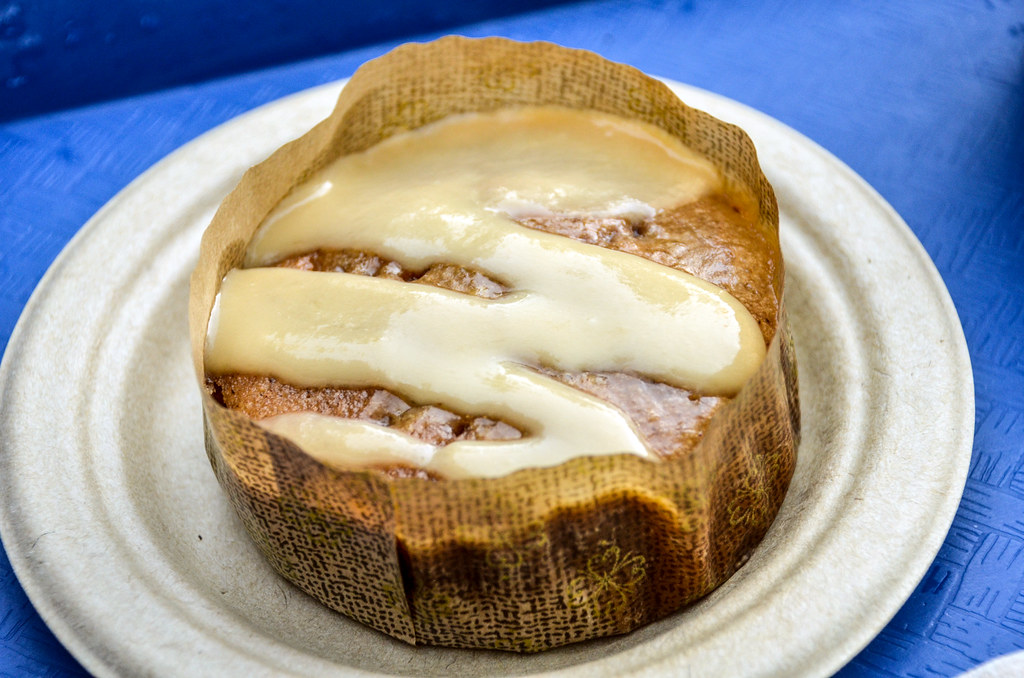 This Malva Spice Cake was my dessert. I thought it was good but not great. The cake was moist and I liked the frosting on it. This was a quality counter-service dessert but nothing that I’d go out of my way for.

All in all, Harambe Market is a nice addition to Animal Kingdom but doesn’t quite meet the peaks of Flame Tree Barbecue or Satu’li Canteen. Not only did the restaurant offer fairly unique food, but the seating area was beautiful and inviting. If there is more brought back to the menu or new options added then it could move up our Disney World Counter Service Rankings.

Have you eaten at Harambe Market? Let us know your thoughts or any questions you might have in the comments below. Planning a trip to Walt Disney World? Check out our Disney World Trip Planning Guide to help you out. If you enjoy what you are reading here on Wandering in Disney please share this post with your friends, as well as like our social media pages. You can also subscribe to the blog via WordPress or email. All of those links are on the right side of this page. Thank you for reading, we really appreciate it!