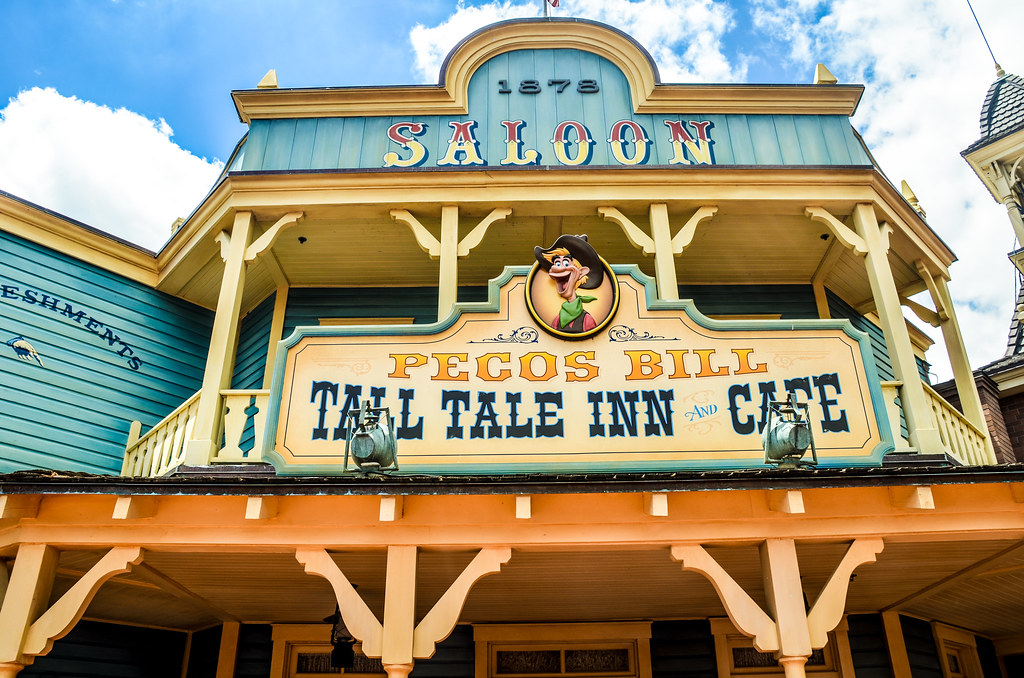 Pecos Bill Tall Tale Inn and Cafe changed their menu a few years ago from burgers to a more interesting Mexican theme. Slowly the menu has changed back and found a middle ground. While I’d prefer the more versatile menu, the current menu is somewhat fitting thematically. The restaurant sits at the corner of Frontierland, right on the verge of Adventureland. Frontierland representing the old west and Adventureland of South America, a southwest menu fits the bill. But that may be grasping at straws.

The environment of Pecos Bill will have a lot to do with when you visit. The restaurant is well themed, if a little understated. There are several rooms throughout the restaurant. A couple of these rooms are supposed to fit the café theme with tables spread throughout. My favorite room in Pecos Bill, though, is the one that features the ‘Inn’. This room gives the feeling of being outside with a little staircase at the corner that would lead guests to their room for the night, as they travel from Adventureland to Frontierland or vice versa. 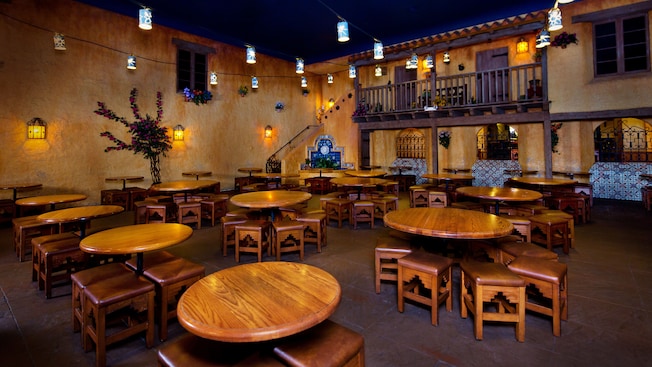 You can enjoy this theming, and specifically that room, when the restaurant isn’t very busy. Unfortunately, that doesn’t seem to happen very often. Usually the restaurant is packed and it’s hard to see any of the little details around. That doesn’t make the experience completely unpleasant but it does take away from a pretty solid environment. Overall, the theming isn’t a reason to go to Pecos Bill but it’s a nice little perk if you go at the right time.

Now, for that previously mentioned menu. Here’s a link, in case you don’t want to stare at the somewhat fuzzy photograph. Like most places, Pecos Bill has seen a few changes post reopening but they aren’t as drastic as some.

We’ve tried a few of the items here with our favorite being the Fajita Platter. Part of the appeal of Pecos Bill is the impressive toppings bar. Along with your usual toppings, this one included sour cream, guacamole, corn and salsa. Now, you may be paying for these things in the actual price of the food but the fact that it doesn’t cost extra is a nice little win for the consumer, especially considering how guacamole or sour cream can cost extra at the chains like Chipotle or Qdoba. Unfortunately, this toppings bar is currently not in use due to COVID protocols. I do expect it to come back in the future but I don’t know how many of the extras will be with it! 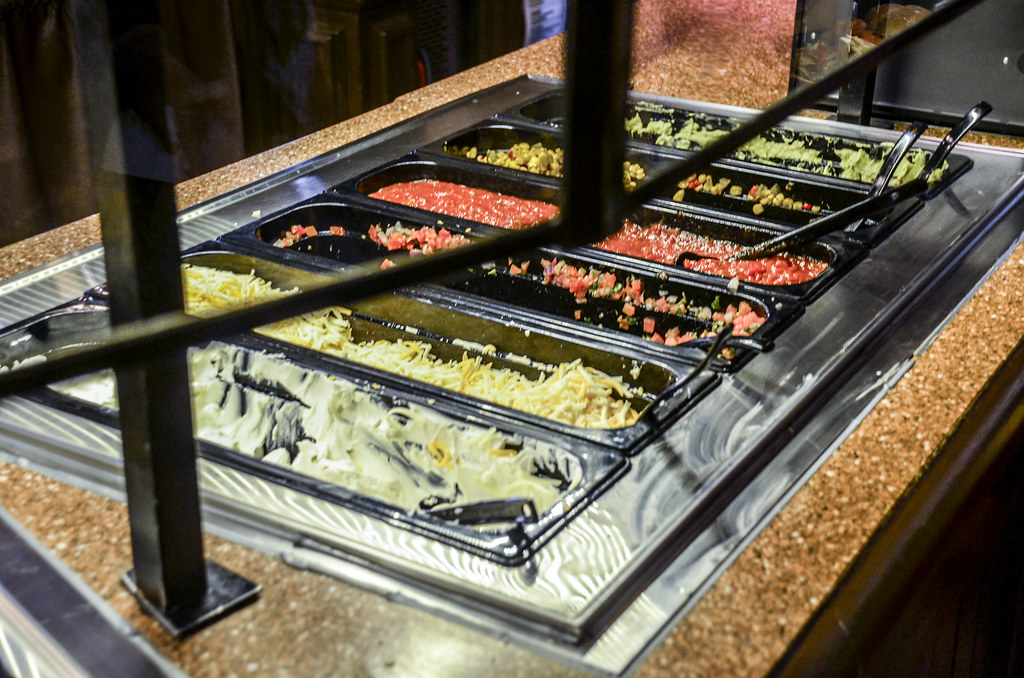 It should come as no surprise that Pecos Bill isn’t authentic Mexican food. I think you could say it’s a step closer than Taco Bell but that may be generous. Fortunately, the food was much better and fresher than a fast food chain but don’t mistake your meal here for some great culinary adventure. The Fajita Platter came with both chicken and beef, as well as rice, black beans and tortillas. As you can see in the photo, there is plenty of food here. 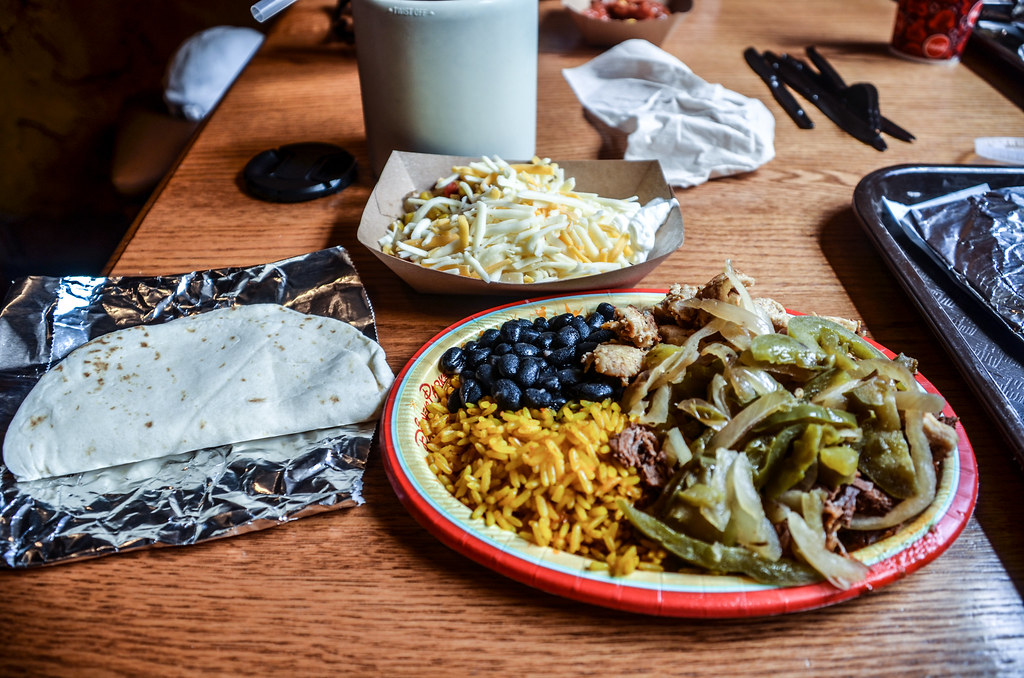 If I remember right, each platter came with four tortillas which is more than enough. Both the chicken and beef were juicy and prepared well. I liked the flavor on the chicken and, surprisingly, preferred it to the Barbacoa. As you can see, they were a little heavy-handed with the peppers and onions but that added some extra flavor to the dish. The rice and beans were pretty good. They both tasted fairly fresh and not like they’d been sitting under a warmer for an hour or two.

The Fajita Platter cost $15 and I think that’s pretty fair, in terms of Disney pricing. There is more than enough food here and I think you could probably share this as a light lunch if you wanted to. 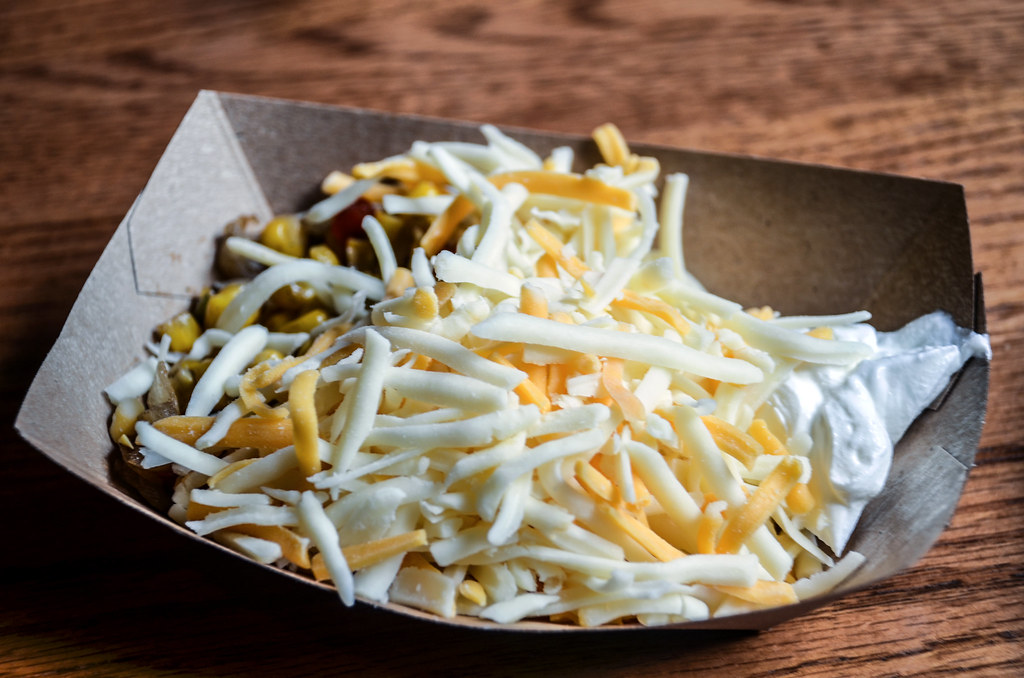 We’ve also tried the nachos at Pecos Bill and liked them a decent amount. We’ve had both the pork and ground beef options and liked the flavor of both meats. Again, the quality isn’t going to wow you but the flavor is better than you’d expect! I’d always prefer that nachos have melted cheese instead of the queso but I didn’t mind the queso here. It wasn’t spicy in the least bit. These do come with lettuce, tomato, sour cream and salsa on the side (until the toppings bar reopens) if you really like to load them up. 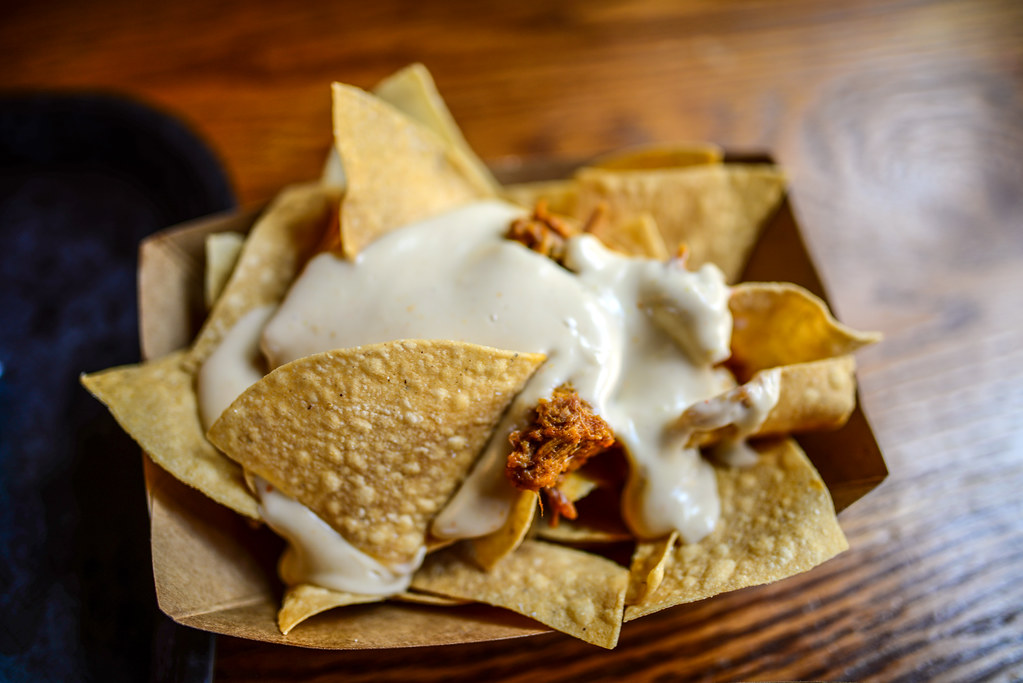 At $10.99, these are probably a little overpriced. The Fajita platter is only four more dollars and is a lot more food. Still, these are pretty tasty and the meat is pretty good! This would make for a hearty afternoon snack split between a few people. It’s not a great value but at least it tastes good!

Overall, I think Pecos Bill offers a slightly different menu than the usual Magic Kingdom counter-service options and the toppings bar makes it one of the better places to eat at the park, thanks to MK’s weak food offerings. The value is fair and the food is good. Come with realistic expectations in tow and I think you’ll be in for a welcome surprise. That said, it still ranks fairly low in our counter-service rankings.

Have you eaten at Pecos Bill Tall Tale Inn and Cafe? Let us know your thoughts or questions in the comments below. Planning a trip to Walt Disney World? Check out our planning guide for help! If you enjoy what you’re reading here on Wandering in Disney, please subscribe to the blog and like our social media pages. You can do both of those things on the right side of this page. Thank you for reading, we really appreciate it!