Chefs de France is a table-service restaurant in Walt Disney World’s Epcot.  The restaurant serves (who would have guessed!) French food and is open for lunch and dinner.  Chefs de France sits in the World Showcase’s France, on the left side of the pavilion.  Tables in Wonderland discount is accepted here but there isn’t any annual pass discount currently.  We recently dined at Chefs de France for dinner and this review will cover that experience. 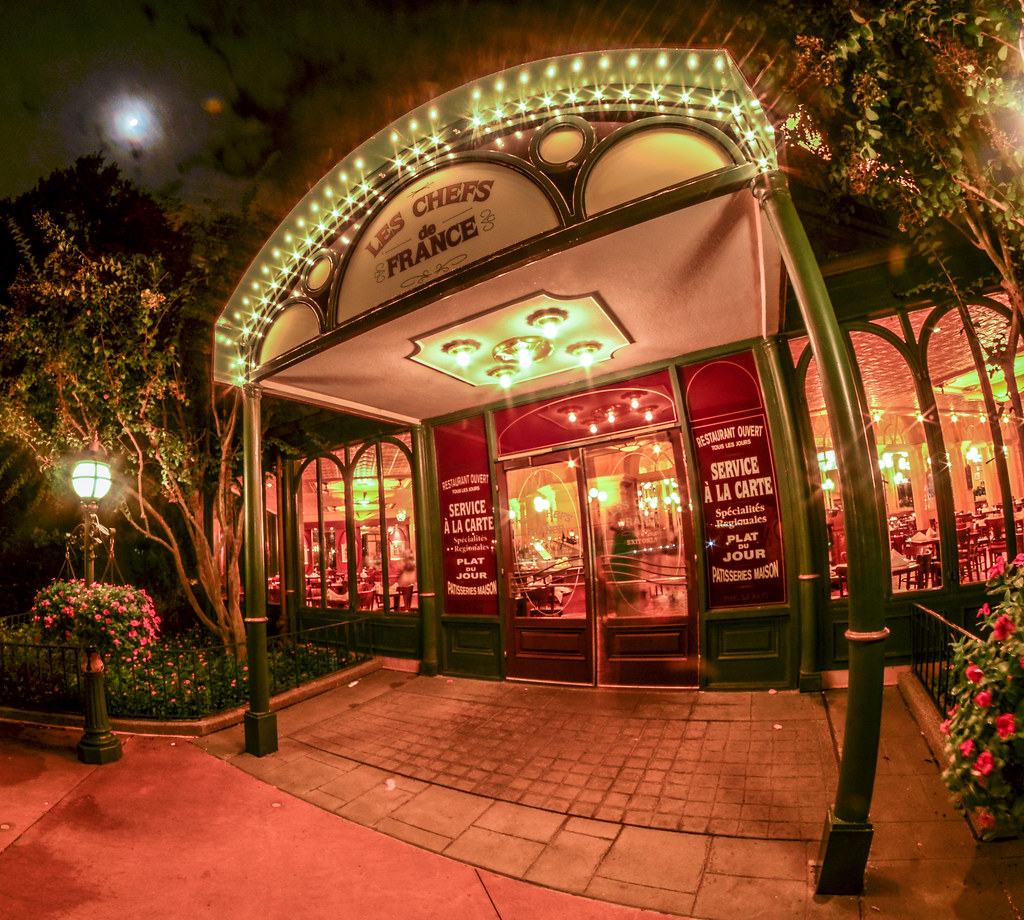 Paris is considered one of the most romantic cities in the world and the France Pavilion certainly follows that lead.  Of course, sitting under the actual Eiffel Tower is more romantic than sweatily bumping into theme park guests who are looking for a ride that doesn’t exist.  With that said, I think there’s a good case to be made for France to be the most romantic pavilion in World Showcase.  The winding back street, beautiful film (Impressions de France), fountain, ice cream shops and, of course, restaurants  make this a beautiful place to spend an evening.  That begins with Chefs de France. 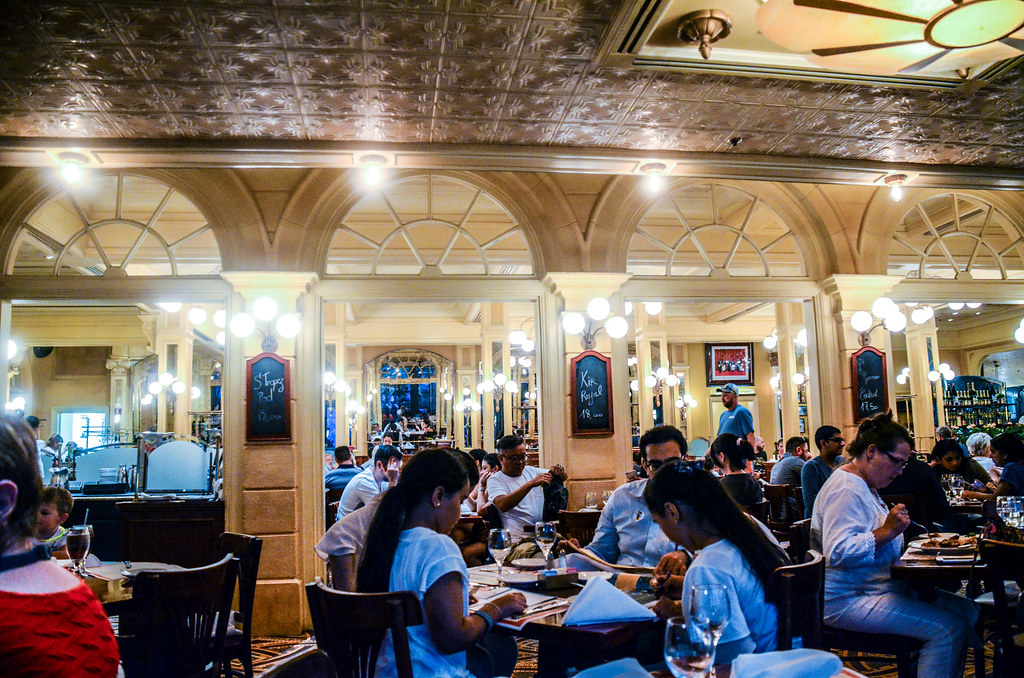 We were seated by the window looking out onto the World Showcase promenade.  This is the best spot on the restaurant, as you can watch passers-by and the nighttime lighting turn on around World Showcase.  I imagine that this would be an okay spot to view Illuminations if you had a late dinner reservation.  If not in a hurry and if you have a smaller party, request a seat by the window.  This is a beautiful experience and helps stay away from the packed in tables. 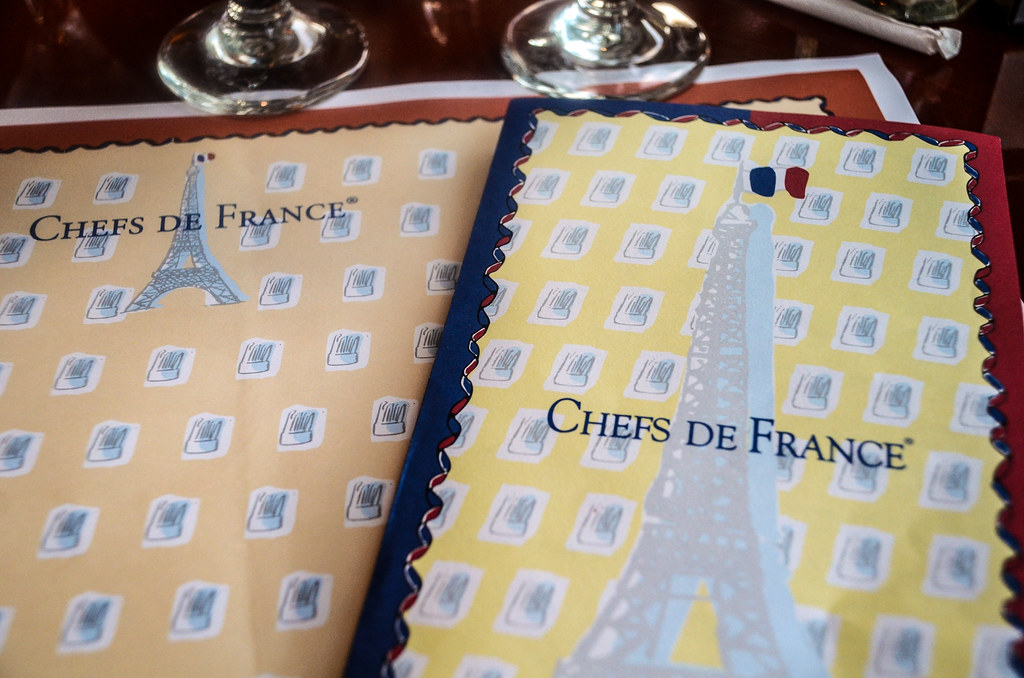 As far as the food goes, the menu has quite a few options with all of them having a somewhat-French inspiration.  Prices are slightly higher than a typical Disney World table-service restaurant but not to the point where it should dissuade from going to this place as opposed to another table-service place. 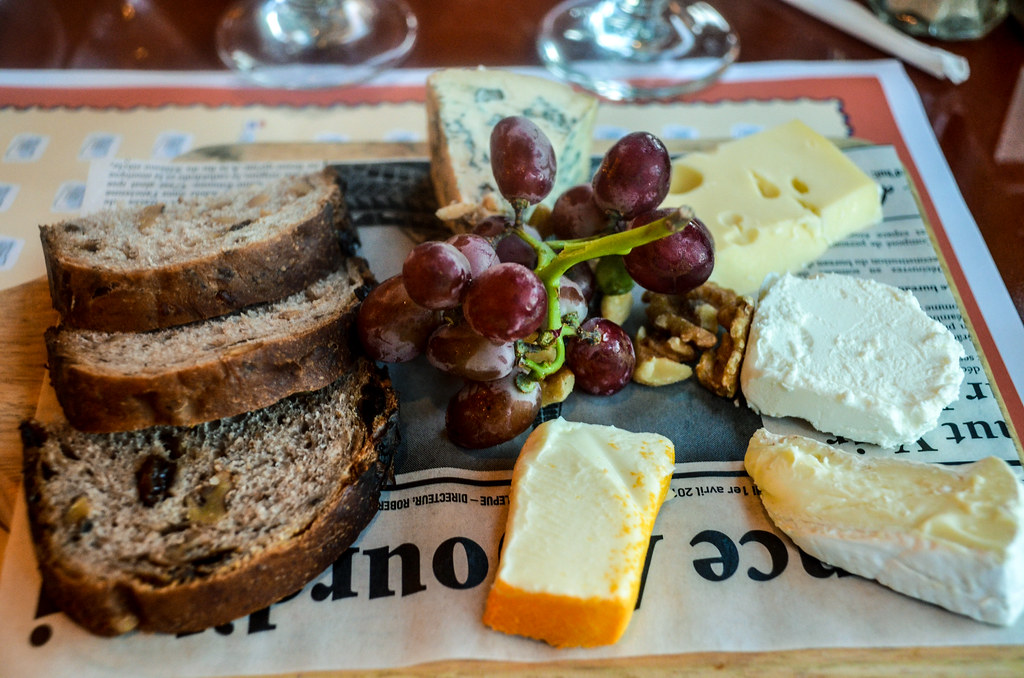 We both started with appetizers.  I ordered the Plateau de fromages de France (Cheese Board).  This came with three pieces of bread and five different cheeses to spread on it.  The cheeses really varied in taste, some very sharp and others more conservative.  I liked most of these cheeses and I think this plate offered something for everyone.  The raisin walnut bread was also quite tasty. 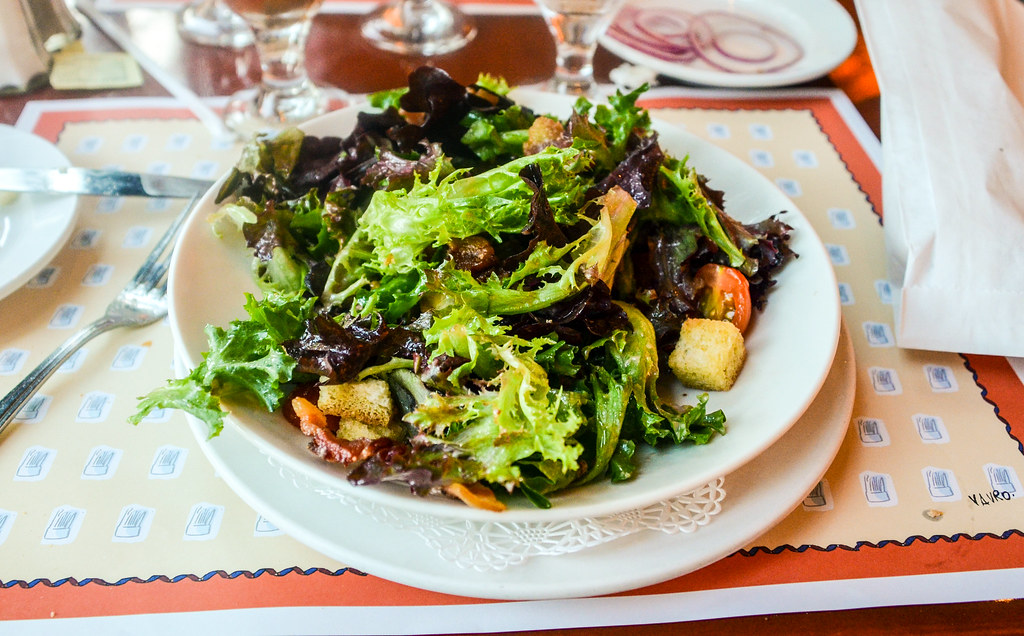 Melissa ordered the Salade aux lardons et croutons.  Forgive my ignorance but I believe this translates to salad with croutons.  I imagine there are a few other words in the middle.  The salad was very fresh and delicious.  This was on the bitter side as far as salads go and may be something to share. 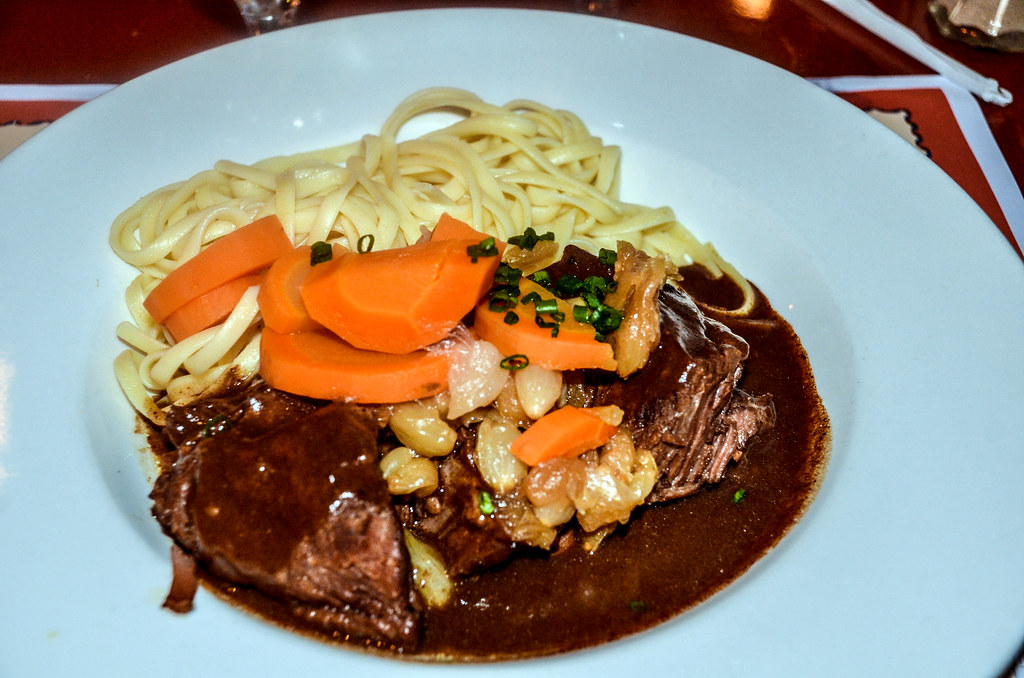 Next came our entrees.  I ordered the Boeuf Bourguignon, linguine.  This was absolutely delicious.  The beef laid in a Cabernet sauce.  The sauce was rich but I never grew tired of it.  The beef was extremely tender, so tender that I didn’t need a knife at all to cut it.  The carrots cut some of that rich taste.  The linguine was also very good and helped balance out the dish.  I would highly recommend this entrée as it was one of my favorites that I had my entire trip.  At about $29, I thought this dish was a pretty good value compared to many other entrees around property. 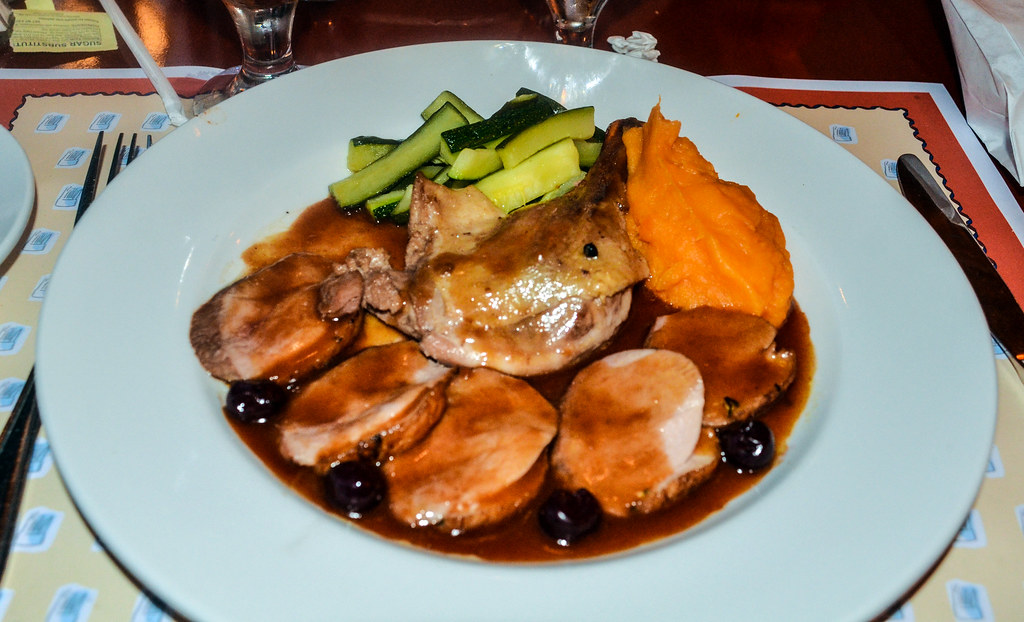 Melissa went with the Canard aux cerises (Duck Breast with Cherries).  Like the beef, the duck was very tender and delicious.  The cherries and cherry wine sauce each complimented the dish well, giving a fruity yet rich flavor to the duck.  The dish also came with zucchini and a sweet potato puree.  Melissa said both sides were very good  and were needed to keep the sauce from becoming over powering.  The duck was $33, which seemed like a fair price.  All in all, I preferred my entrée while Melissa liked hers more.  Your preference will likely come down to what type of meat you like more. 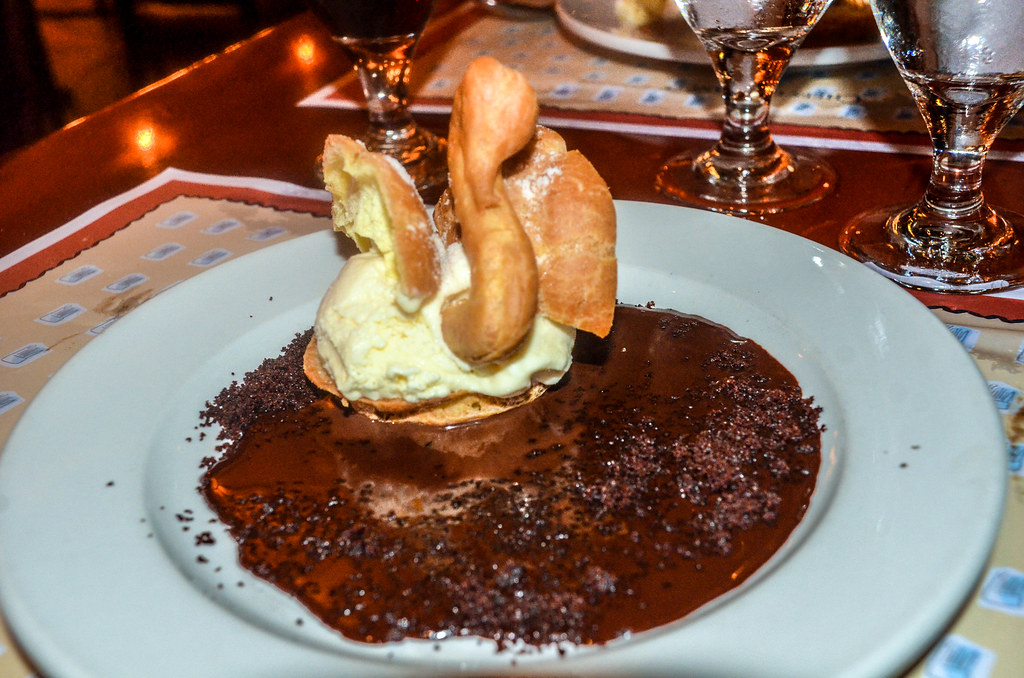 Naturally, desserts had to happen.  I had this beautiful swan cream puff (Cygne au chocolat).  This dessert was so pretty that I felt bad eating it.  Of course, I did eat this beautiful swan swimming in chocolate.  The pastry was tasty although not overwhelmingly so.  The cream and chocolate were both fantastic and really made the dessert.  I thoroughly enjoyed the dessert but was even more blown away by the plating. 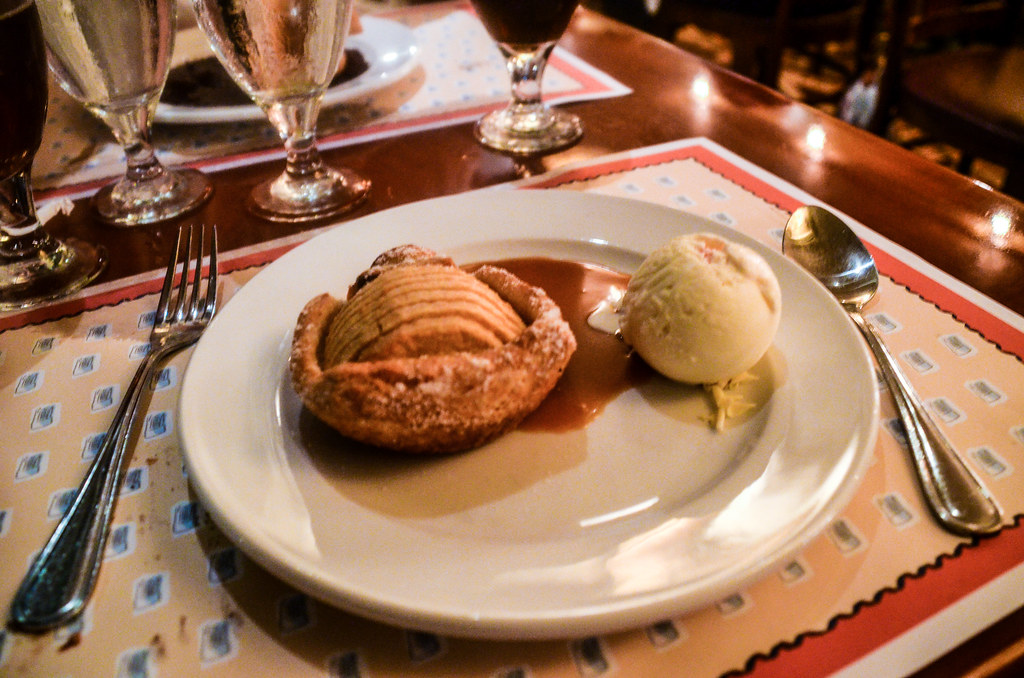 Melissa had the Tarte aux Pommes which is an Apple Tart with almond cream, caramel sauce and vanilla ice cream.  She loved the dessert saying that it was one of the best of the trip.

Chefs de France is an excellent restaurant that can be quite romantic in the right setting.  The food is fairly priced, relative to other Disney restaurants, and was largely delicious.  While I don’t think the atmosphere in the restaurant is in the top-tier at Walt Disney World, I do think this is a nice restaurant with very good food.  I’d absolutely recommend this restaurant, especially if you like or are curious about French food.

Have you been to Chefs de France?  Let us know your thoughts on the restaurant, along with any questions you have, in the comments.  If you enjoy what you’re reading here on Wandering in Disney please subscribe to the blog via email or WordPress and like our social media pages.  You can find all of those things on the right side of this page.  Thank you very much for reading, we appreciate it!