While Disney Parks are my typical and preferred theme parks, there’s no doubting that Universal Orlando has closed the gap between their parks and Disney.  A big reason for that is a slew of new attractions that are some of the best in the world.  While I don’t consider myself an expert on these parks, a reader recently asked if I would give my top-10 Universal Orlando attractions.  I can’t turn down a good top-10 list idea so here we are. 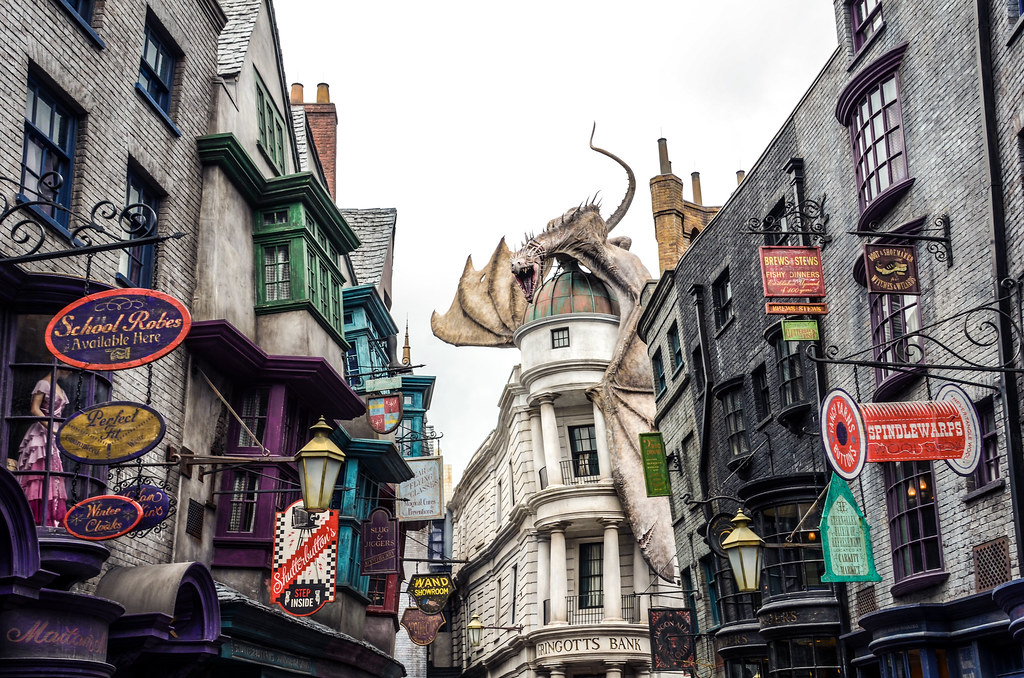 The one issue with this list is that attractions at Universal Orlando aren’t exactly up my alley.  While I’m happy to go on a thrill ride here and there, a park full of them isn’t my preferred slate.  Because I’m a chicken, I had my wife help with the list as she can accurately judge roller coasters.  I can’t judge them because I either don’t go on them or have my eyes closed during them.  For the most part, this list mine but she helped with some additions.  Without further adieu, our top-10 attractions at Universal Orlando.

Transformers 2 3D – This show is now gone from the park but if it was still there it definitely would have made my top 10.  This was cheesy, 80’s fun in a theme park. 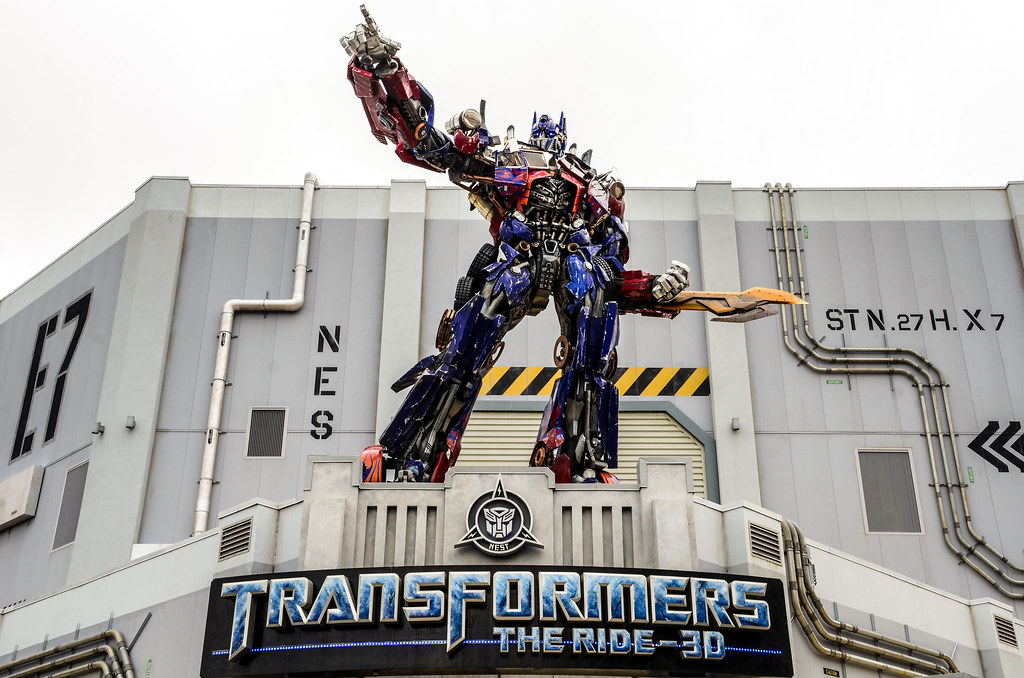 Transformers: The Ride-3D – This could easily make the top 10 as the sets and screens are combined really well.  The reason this doesn’t make it higher is because I don’t remember a single thing about the attraction’s plot.  Kind of like Transformers the movie!

Jurassic Park River Adventure – Dinosaurs and a flume ride should make for the best attraction in the world.  Instead this is more of a “been there, done that” attraction.  It looks nice, the drop is fun but there isn’t much more there.

Men in Black Alien Attack – This should be in the top-ten but I went with sentiment instead.  Men in Black is another futuristic ride that lets guests shoot down the bad guys.  It’s like Buzz Lightyear Astro Blasters but better.

10. E.T. Adventure – Is this one Universal Orlando’s 10 best attractions?  No, but it is certainly a favorite of mine.  Taking a lead from Peter Pan’s Flight, guests soar through and above this attraction on bikes.  The attraction is fairly normal until you get to E.T.’s planet and then there is an absurd amount of strange things to look at.  Do all of these things look good?  No.  They definitely interest me though.  I love this attraction and think that it’s Universal’s best or most interesting dark ride. 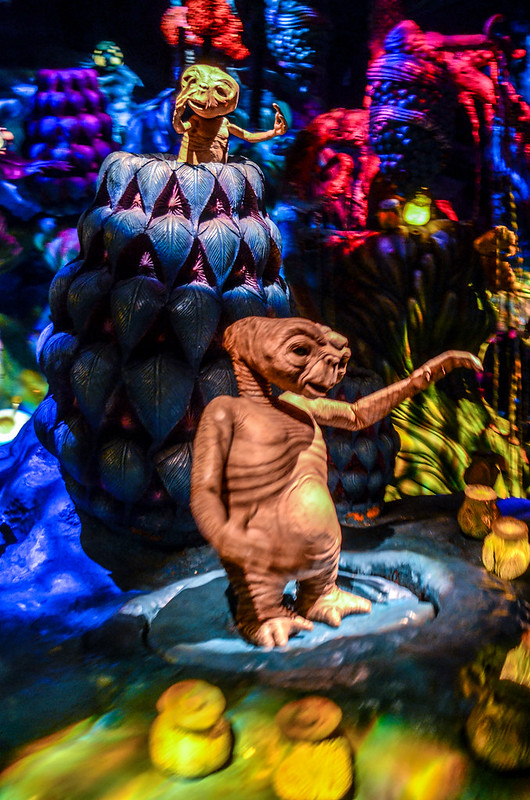 9. The Simpsons Ride – While this is simply a roller coaster simulator and is docked accordingly so, it is definitely funny and entertaining.  I don’t consider myself a Simpsons aficionado but the humor throughout this ride’s queue is on the mark.  That doesn’t stop once actually on the ride.  Our journey narrowly escapes death several times and always lands in hilarity.  This won’t win any awards for technical achievement and is part Universal’s over-use of screens, but The Simpsons Ride is a whole lot of fun. 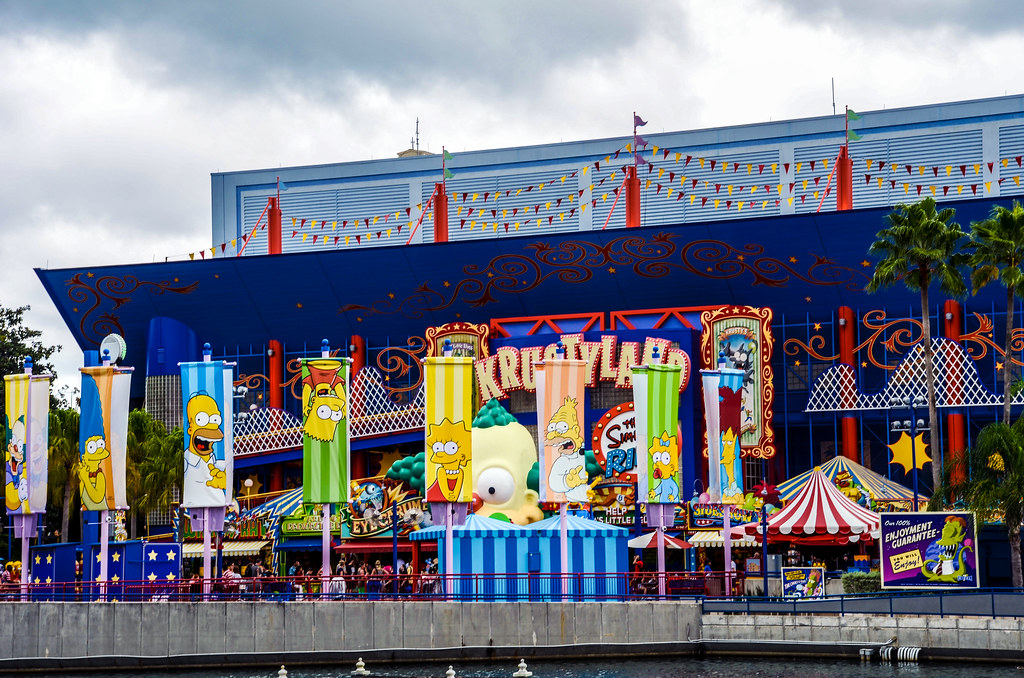 8. Hogwarts Express – This attraction takes guests between parks in a highly theme experience.  Going from Diagon Alley (King’s Street Station) to Hogsmeade or vice versa is a brilliant, if not obvious, choice in theming.  While the actual attraction isn’t exactly a thrill, it sells the story in getting from one area to another.  Where this really excels is the outward appearance of the Hogwarts Express and the King’s Street Station.  Both look incredible and certainly transport guests (pun intended) to the setting of the films.

7. The Incredible Hulk Coaster – One of Universal’s gigantic coasters, this has a loose story to fit the ride.  That doesn’t really work for Melissa or I.  What does work is this being an excellent roller coaster.  Soaring over Island of Adventure’s lake is impressive, as is the gigantic track.  While I think there are negatives to this attraction, the fun track and looming presence of The Incredible Hulk Coaster outweigh those negatives.

5. Skull Island: Reign of Kong – Universal Orlando’s latest attraction is a bit of a disappointment in that it doesn’t measure up to either of the Harry Potter attractions.  Once that disappointment is washed away though the resort is left with a beautiful attraction.  Reign of Kong takes guests through Skull Island with a few amazing sets.  Unfortunately, the screens are not blended in as well as I hoped.  The action part of the ride is our truck getting attacked by dinosaurs and King Kong coming to our rescue.  This is followed up by driving by a gigantic King Kong animatronic figure.  I thoroughly enjoy this ride but think they could have done better.  The plot and some scenes work really well, as does the queue.  That makes the parts that aren’t executed as well stand out even more unfortunately. 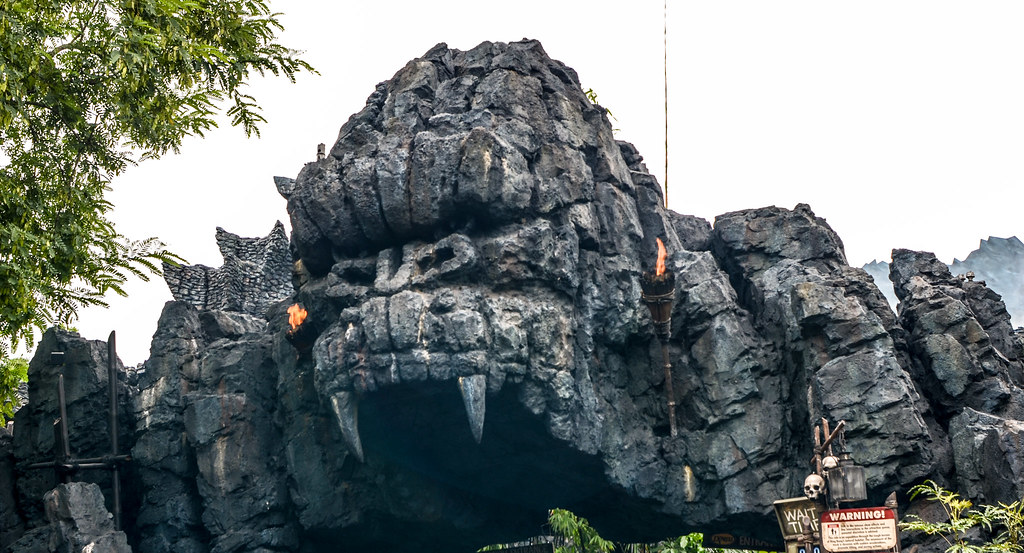 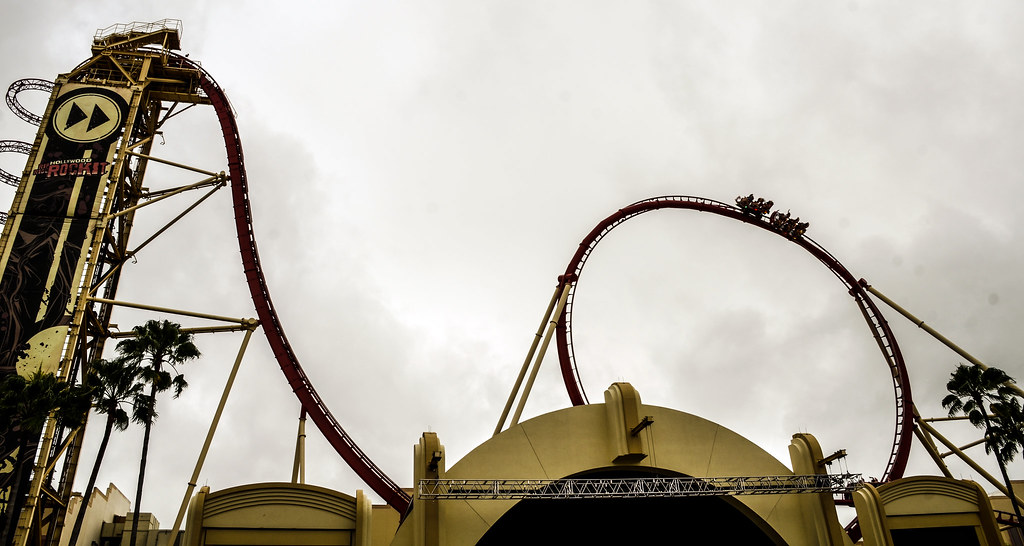 3. Harry Potter and the Escape From Gringotts – A few years ago, I thought this was my favorite attraction at Universal Orlando.  Now it sits pretty solidly in third.  Largely a simulator, Escape From Gringotts takes guests on a ride through the storied (at least to Harry Potter fans) bank.  While I love the plot and most of the ride, I wish this was more of an indoor roller coaster and less simulated.  There are some amazing moments switching between screens and sets, and if you’re trying to figure out the ride system the whole time then this attraction can be a bit disorienting.  That’s good as the ride envelops the senses well enough.  Still, I always feel like the actual ride is missing just a little something.  I’d be remiss if I didn’t mention the extraordinary queue that is Gringotts Bank.  Between the beautiful chandeliers, impressive animatronics, and the jaw-dropping architecture, walking inside of this queue 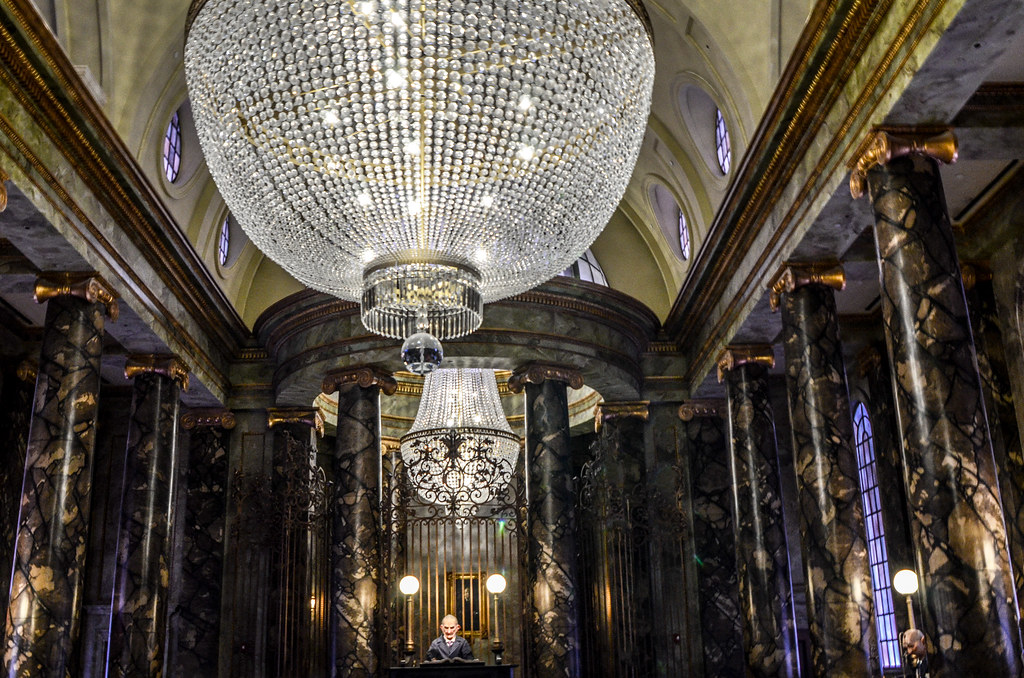 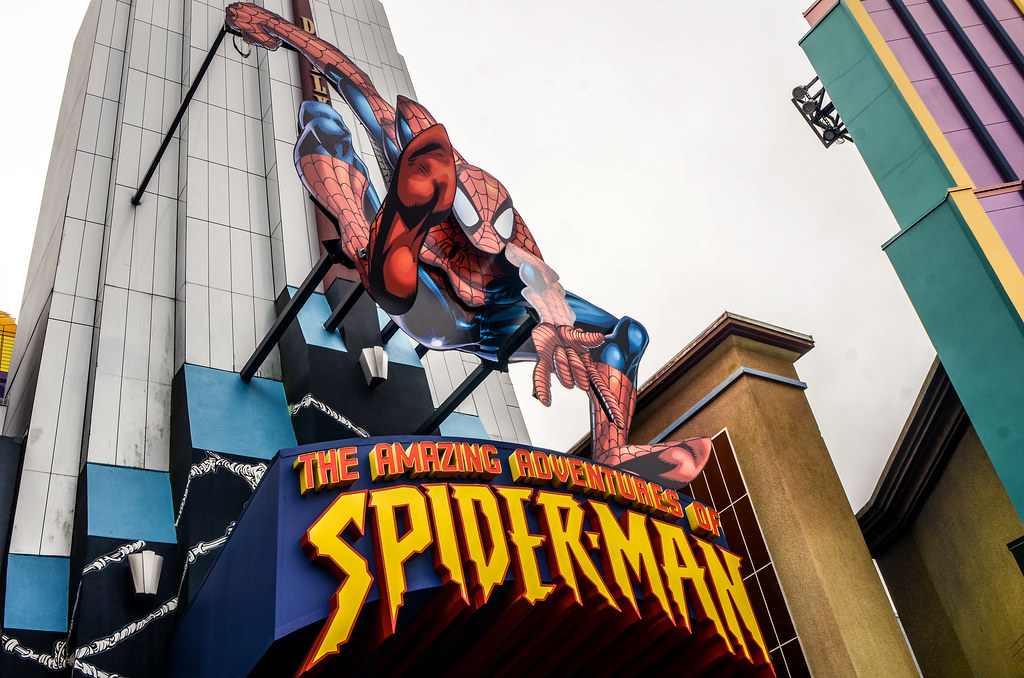 Taking guests on an adventure through New York City in a vehicle, this ride turns into a fight between Doc Ock.  The ride vehicle portrays a car and first time riders may just think the attraction will ride along a track the whole way.  This attraction will surprise.  The highest compliment I can give The Amazing Adventure of Spider-Man is that the transition from screen to set is seamless and I have a hard time telling what is actually going on with the ride system.  This attraction really is transporting to the scene unlike many current day screen-based attractions.

1. Harry Potter and the Forbidden Journey – When I first experienced this attraction I didn’t think as highly of it as I do now.  Turns out this was only because it made me a little bit sick.  Forbidden Journey is a perfect blend of screens and physical sets.  The story takes you through a thrilling chase with Harry, giving guests the chance to experience what could be considered a greatest hits of adventures through Hogwarts.  Forbidden Journey’s ride system is creative, carrying guests through the story.

All of this alone would make for an excellent attraction on its own.  In fact, it would still be number one but once the queue is factored in then this is the runaway winner. Walking through Hogwarts Castle, in all it’s grandeur, is an experience in its own right.  There’s plenty to look at, regardless of if you’re looking for in-depth details or just beautiful sights.  The pre-show with Harry, Ron and Hermione is a special treat.  All in all, this attraction is perfection and one of the best rides in the world. 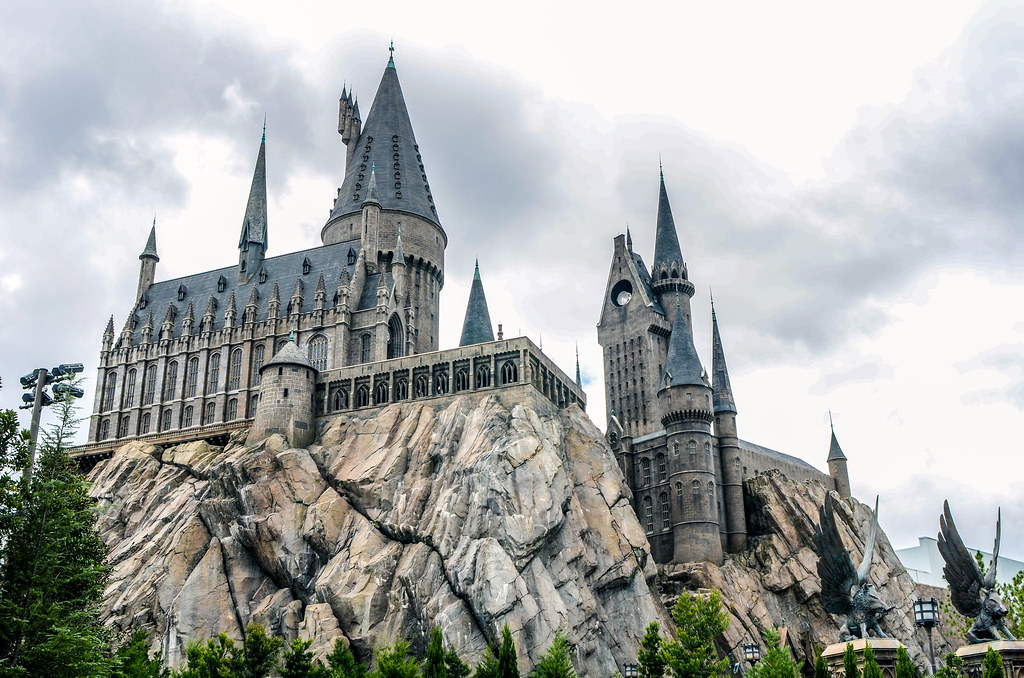 In my mind, Universal Orlando has 3 of the best attractions in the country.  Their top 3 probably take down Disney World’s top 3.  Unfortunately, the rest of the group doesn’t have any stand outs.  There are quite a few good rides but nothing that jumps out to me.  If only time for one option, I’d rather spend 45 minutes exploring Diagon Alley or Hogsmeade then going on any attraction ranked 4th or higher on this list.  Again, I’m not the biggest thrill rider and this park appeals to those that are.  All of this to say, Universal Orlando has a bunch of fun attractions but only a few really great ones.

What are your favorite attractions at Universal Orlando?  Let us know in the comments!  If you enjoy what you’re reading here on Wandering in Disney please subscribe to the blog via email or WordPress and like our social media pages.  You can find all of those things on the right side of this page.  Thank you very much for reading, we appreciate it!