Pandora – World of Avatar is Disney’s Animal Kingdom newest land.  Pandora is inspired by the movie Avatar and the beautiful world that director James Cameron dreamed up.  Opening in May of 2017, the land still draws heavy crowds and has long lines for the two attractions there.  This review will cover my thoughts on the atmosphere, visuals, and attractions in Pandora – World of Avatar.  Stay tuned for a post focused more on touring strategy for this land in the coming days. 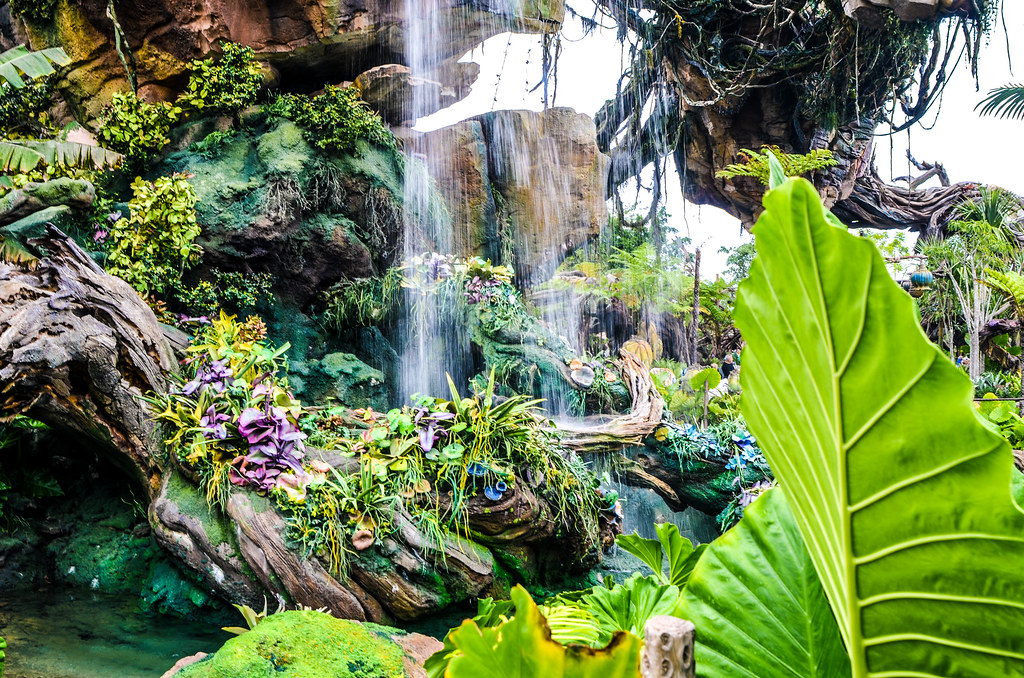 Over the last decade, theme park lands based on movie franchises have become in vogue.  While we can and have debated the merits of these lands, there’s no doubt  that they are immersive and typically beautiful.  Every the recent lands that haven’t been based off of an IP seem to have a real emphasis on aesthetics.  In fact, I would say some of these lands have had content compromised in favor of an outward appearance.  New Fantasyland certainly comes to mind.  Diagon Alley may even fit that bill, just the aesthetic is so incredible that the compromise isn’t as noticeable.  Pandora – World of Avatar certainly spared no expense in appearance but did the land’s beauty become overshadowed by a lack of quality attractions and things to do? 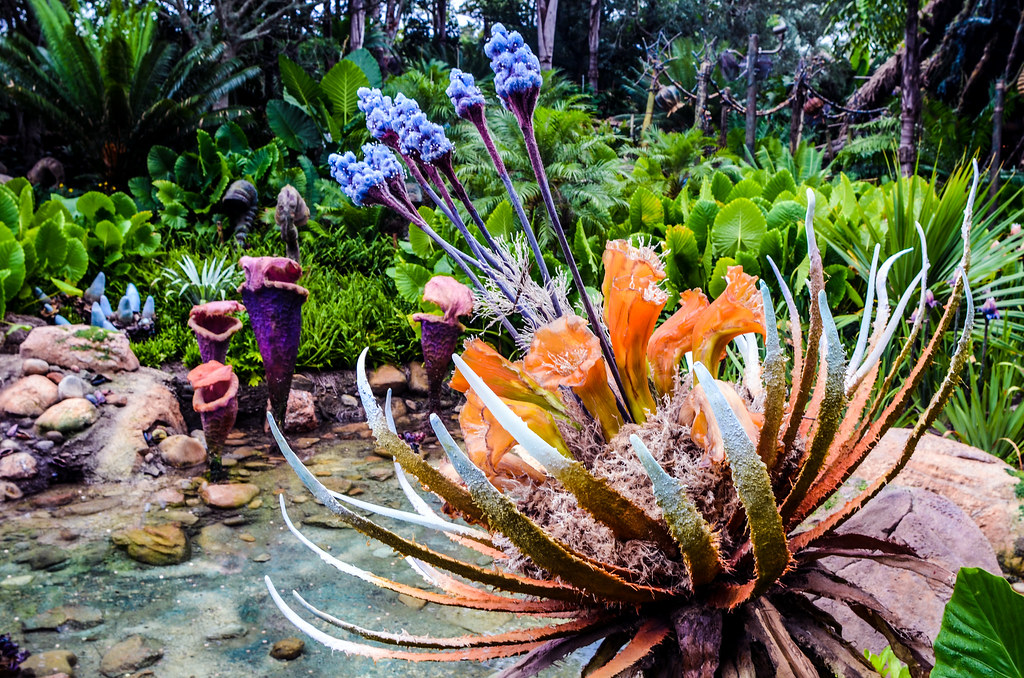 In short, the answer is no.  Since my blog posts have never been about being “in short” statements let’s break Pandora down into sections for the sake of this review.

As I said in opening, we live in an age where theme park lands are supposed to look good above all else.  Pandora certainly doesn’t disappoint there.  From the moment guests enter this new land, colors, plants and running water is always within sight. 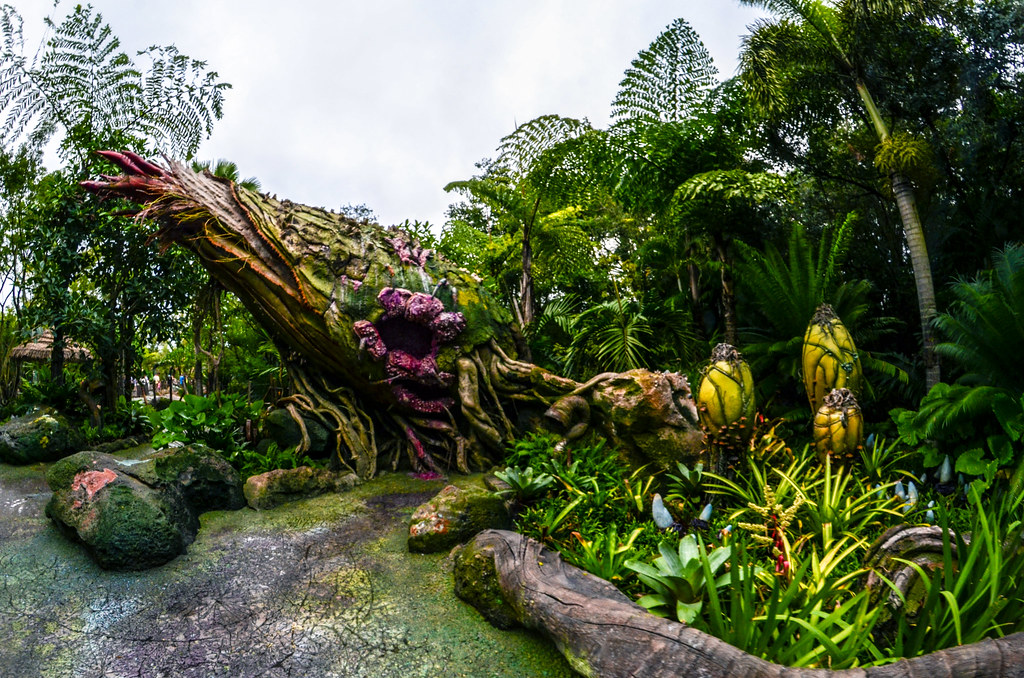 All of Animal Kingdom is certainly easy on the eyes.  I’m not sure I’d use that description for this specific land.  While Africa, Asia and Discovery Island have deep earthy tones and natural greens, Pandora adds bright yellows, pinks, blues (and most other colors) to those existent greens.  This is a smart move by Imagineering as Animal Kingdom is still evident in Pandora but this does feel different from the authenticity offered in Africa and Asia.  As a planet away from Earth, Pandora is supposed to feel different and it certainly does.  Everywhere you look something pops out at you.  The area is natural beauty while still having something just a little different about it.  To be clear, I think that’s great. 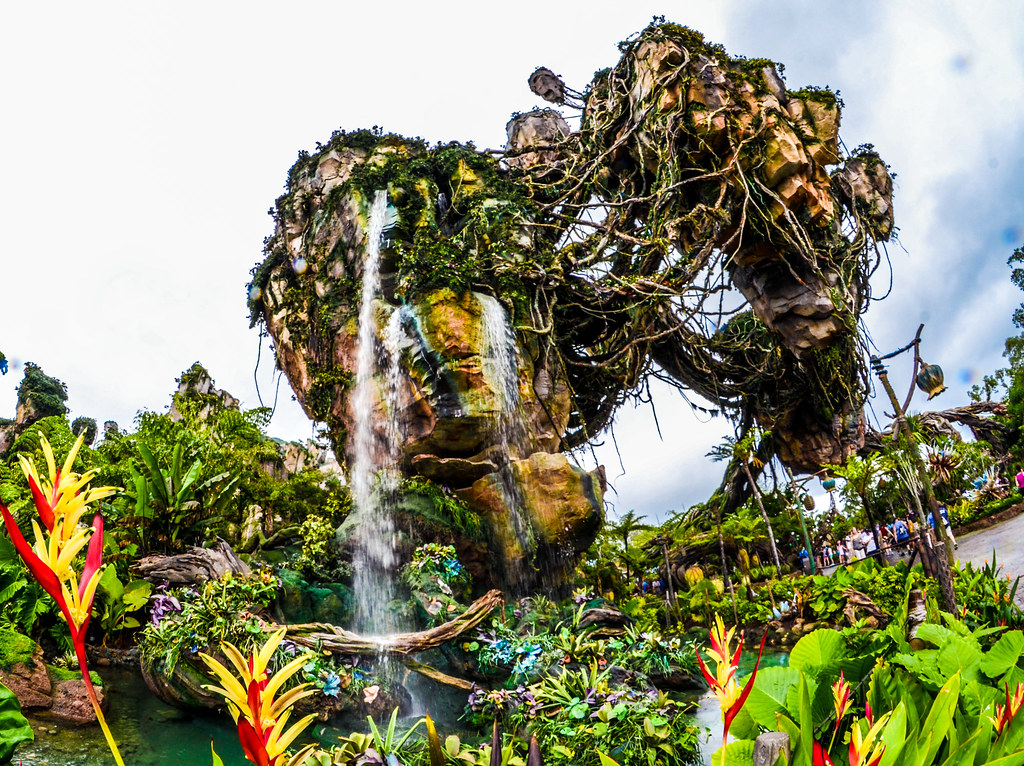 The centerpiece (visual weenie?) of Pandora are the floating mountains with the water fall.  While these mountains are clearly not ‘floating’ that doesn’t stop them from being stunning.  I don’t think the fact that it’s easy to spot how they aren’t floating is a problem for the land.  At certain angles these mountains can suspend belief.  At every other angle in the land they are still a sight to behold.  The waterfall coming off the mountain is one of my favorite aspects of the land.  I think the kinetic energy of running water is one of the most unheralded aspects of a theme park and Pandora certainly takes advantage of that.  Aside from this waterfall, there are streams and ponds everywhere you look. 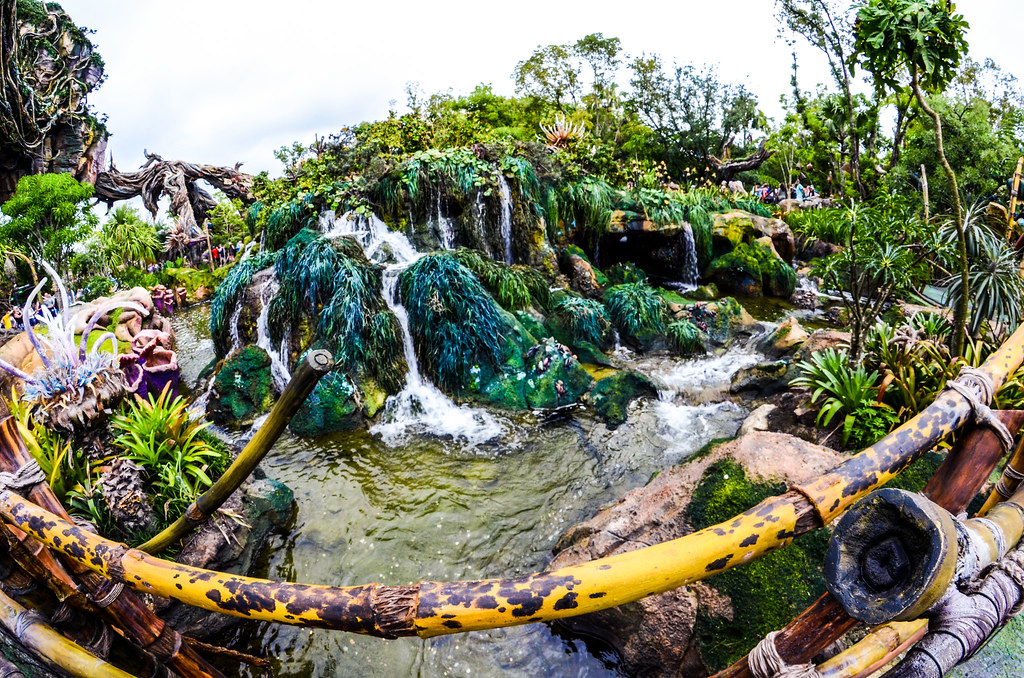 This is just across the walkway from the mountains.  Aside from the interesting blue color palette added, these little streams could easily be seen in any other part of Animal Kingdom.  I think this benefits not only Pandora but the entire park.  While some wonder how this new land fits in thematically with the rest of Animal Kingdom, these areas help blend everything together.  Plus, Pandora easily emphasizes the conservation and earth-friendly theme Animal Kingdom is known for.  This land is far from a problem thematically. 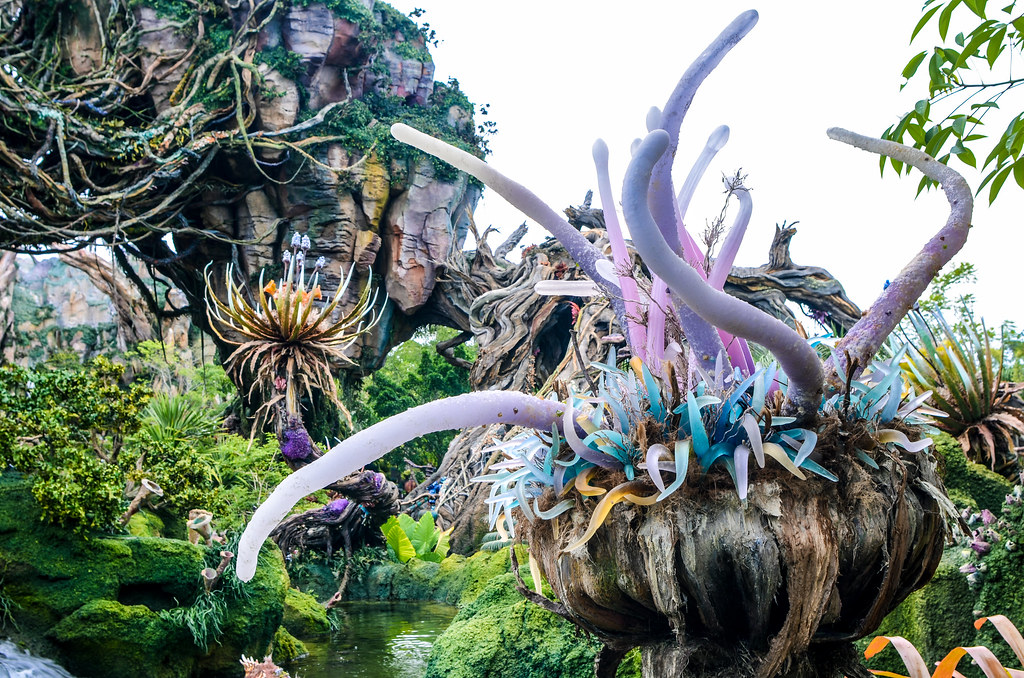 Another area where Pandora excels aesthetically is blending in fake plants with real vegetation.  Clearly there were both and while some were obviously not real, the vast majority of plants were beautiful and exotic enough to make me somewhat curious if they were real enough.  Melissa and I invented a game walking around the area called “Real or Not” which is what it sounds like. 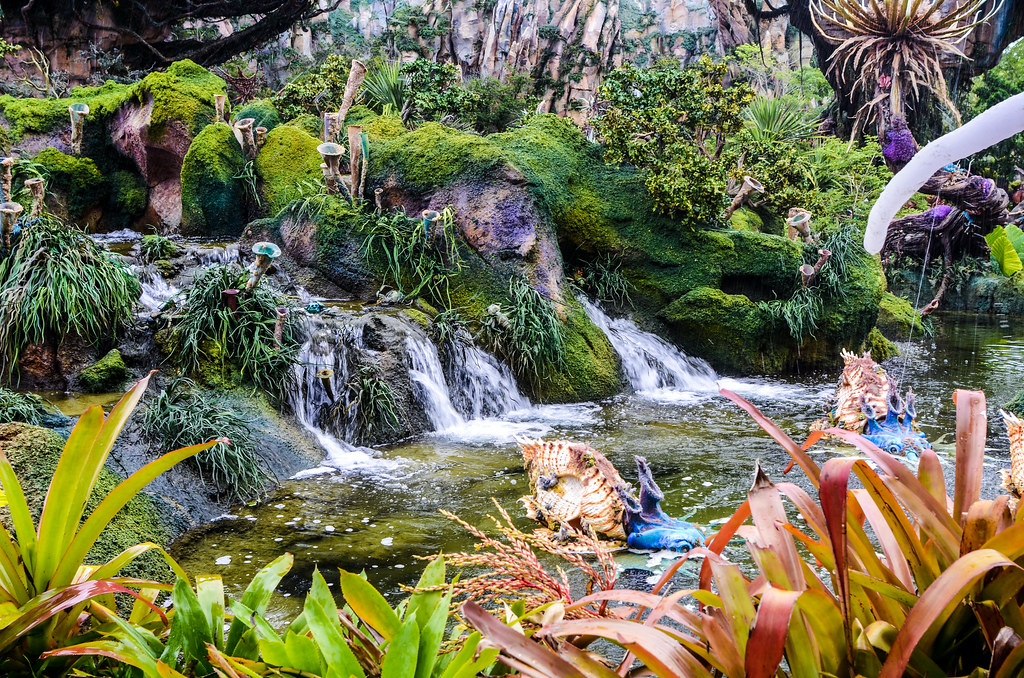 There is plenty of space to walk around in Pandora.  The land is smartly on different levels, sloping down the further you get into the land.  This makes the mountains seem taller as you stand under them and gives you a broader scope of the area while walking into the area.  This also fits thematically as the area guests are visiting is called Valley of Mo’ara. 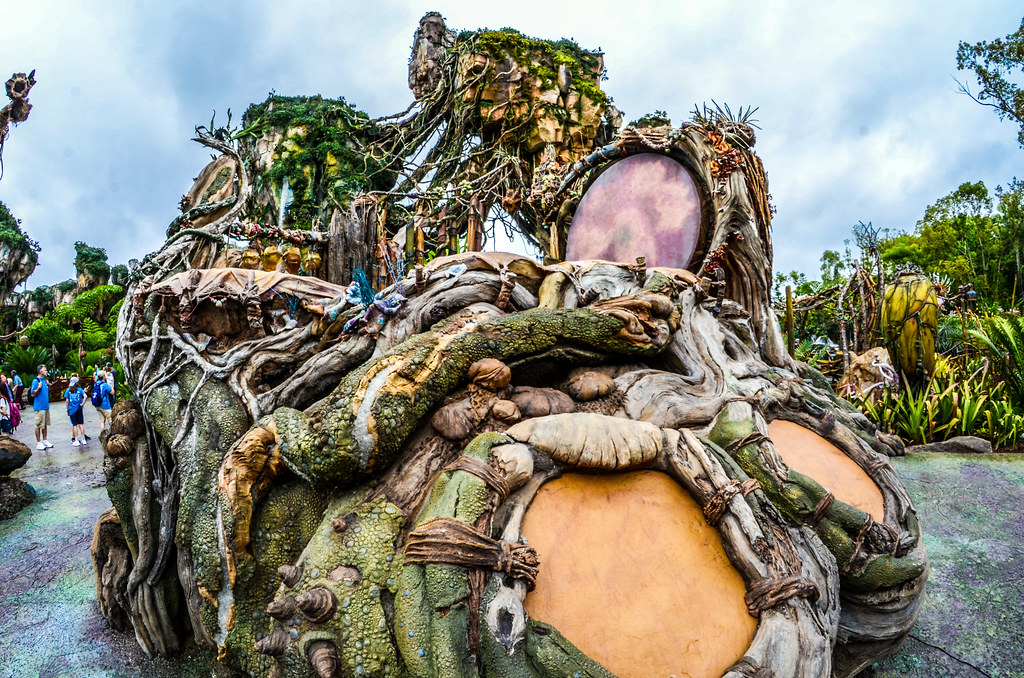 The drumming area is a fun place for kids in Pandora and a nice tie-in to the interactive aspects of Animal Kingdom.  The drum show that takes place here a couple of times a day also adds to the atmosphere.  Along with the drums, the area by Satu’li Canteen is the only other area of Pandora isn’t overwhelming your senses with colors and beauty.  This is by design as the area is supposed to represent the devastation caused by humans trying to take over the land. 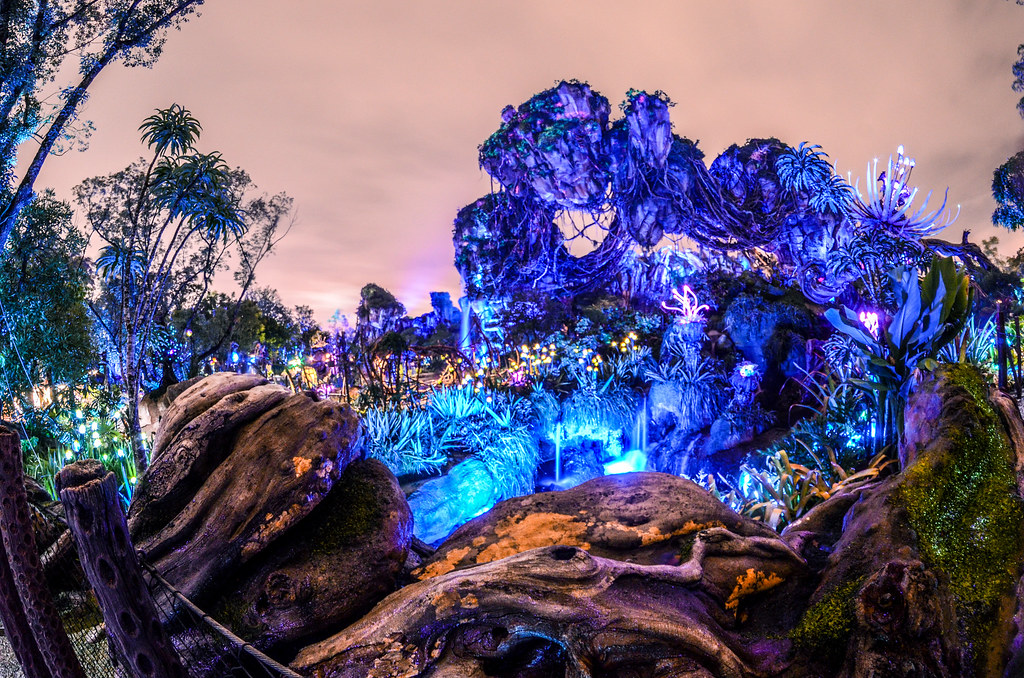 One small misstep in Pandora is the way it looks at night.  I was very excited to take in the sights at night.  While I thought the area was still beautiful, the bioluminescence was only in some areas and the plants didn’t come through quite like they did in the day.  I don’t think the lighting here is anything great but I also think part of the problem is simply that the land looks so great in the day.  There are just so many colors to look at during the day and I think that it’s next to impossible to make that come through in the evening.  Yes, the area is beautiful at night but not quite what Disney hyped it up to be.  This is just picking nits though, I would recommend seeing the land both at night and during the day. 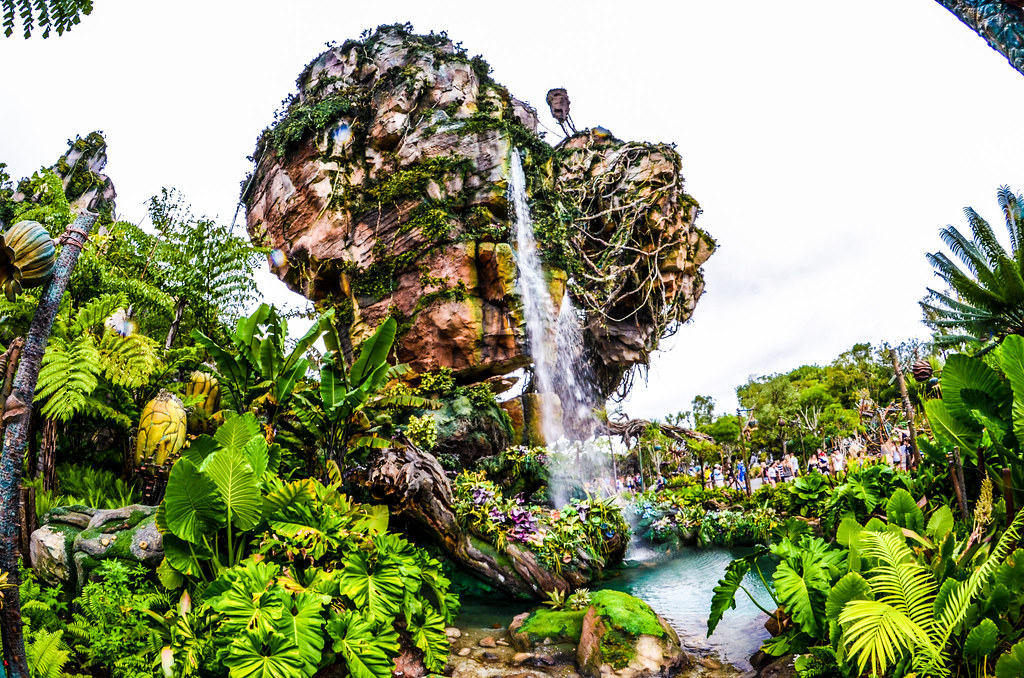 All of Pandora worked for me.  The area is beautiful and a nice mix of real world beauty mixed with outrageous color.  While the crowds will eventually die down, I don’t think the area will age poorly because of the beauty.  The water makes for an inviting atmosphere.  All of this amounts to a perfect place to linger and just soak in the sights.  Explore every area and path, the beauty will wow you. 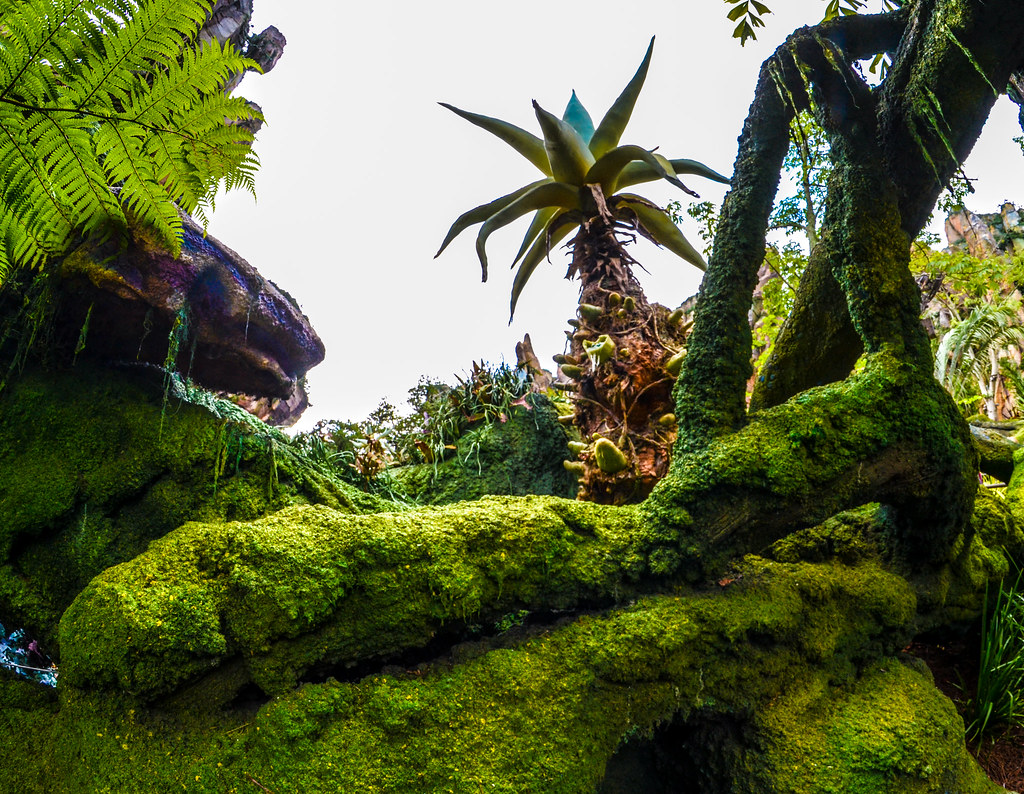 While the aesthetic is out of the world (pun intended), without attractions Pandora wouldn’t be much.  Thankfully, we don’t have to worry about that.  We’ll start with the biggie. Stop reading now if you don’t want it to be spoiled!

Flight of Passage is Pandora’s E-ticket attraction.  This is a motion-based simulator similar to Soarin’.  The ride vehicle here is impressive as it imitates a banshee, which is a creature from Pandora.  Guests ride this vehicle like a bike and the banshee moves and imitates breathing. 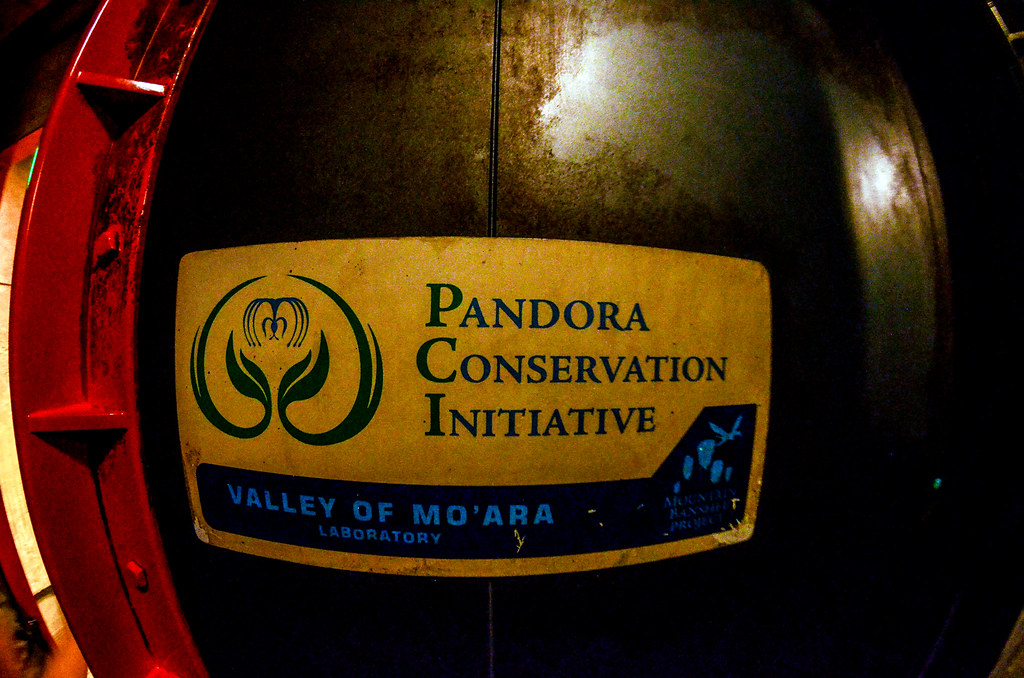 While riding this banshee you soar through the Valley of Mo’ara.  The attraction is incredibly beautiful and thrilling.  I like Soarin’ but Flight of Passage is at a different level.  I think this is the best attraction Disney World has added since Expedition Everest (at least) well over a decade ago.  While the long lines are deterring, I’d definitely recommend experiencing this once. 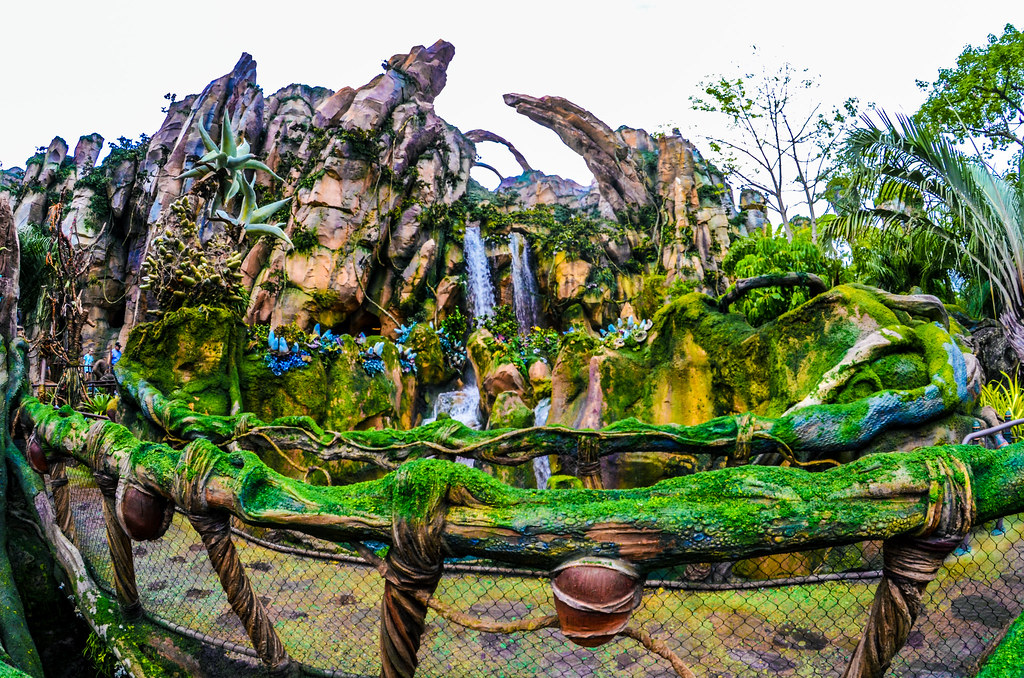 That’s without even talking about the queue which offers maybe the most beautiful views of Pandora – World of Avatar.  The outdoor portion of the queue is as beautiful as it gets.  My favorite view of the whole land is in the photo above while looking at the mountain and waterfall.  If you look the other there is a great view of the floating mountains. 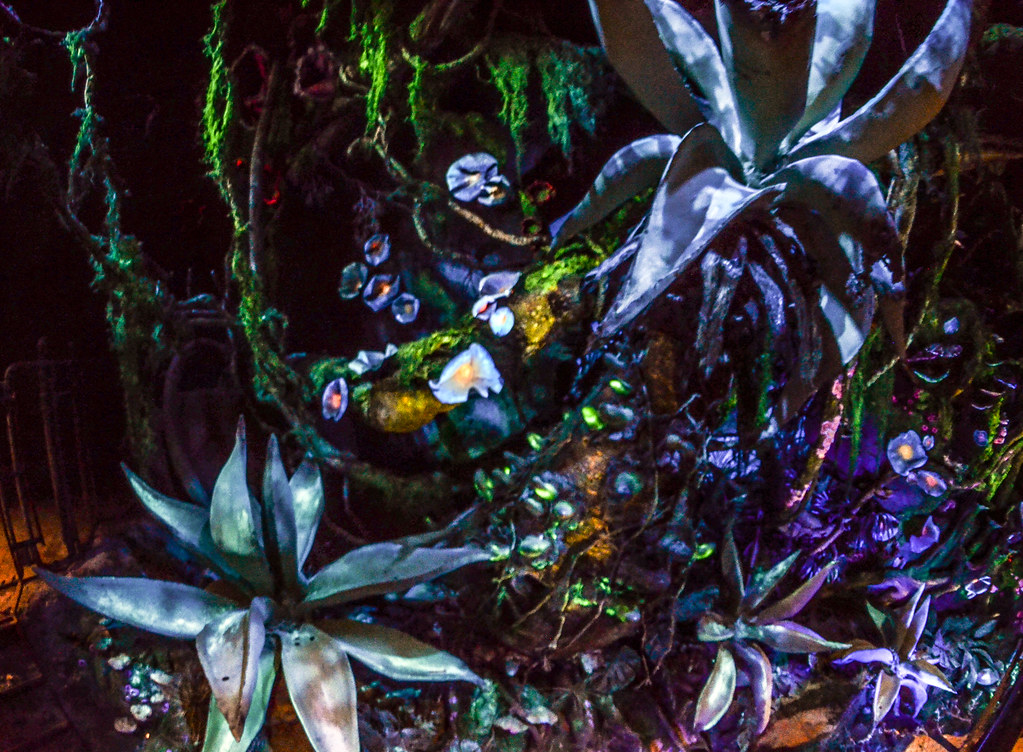 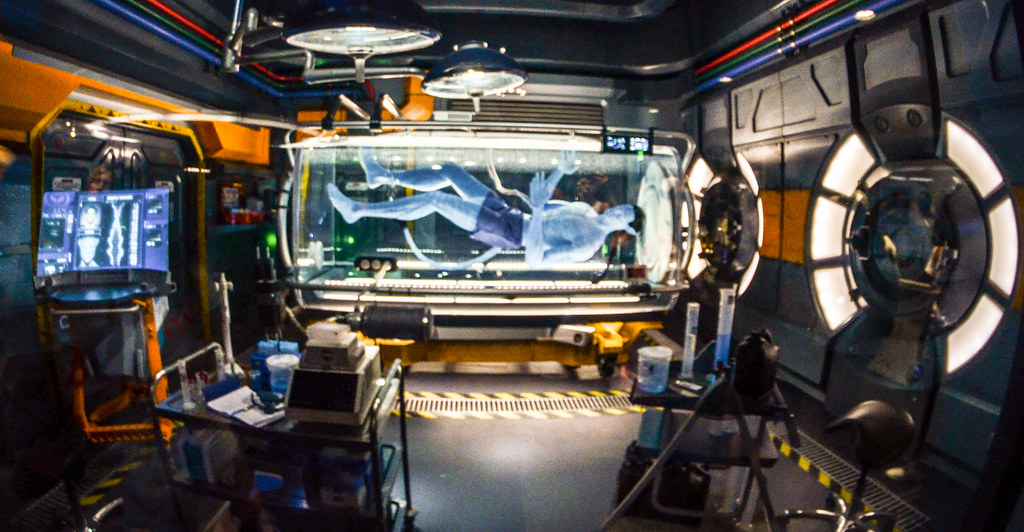 After that comes the scientific portion of the queue.  The ride pairs you up with a banshee to ride.  Of course, banshees are too dangerous to approach on your own so you have to do that while using an avatar.  You do that by going through the science labs in the queue.  Sound confusing?  Well, it kind of is but that doesn’t make the visuals any less impressive. 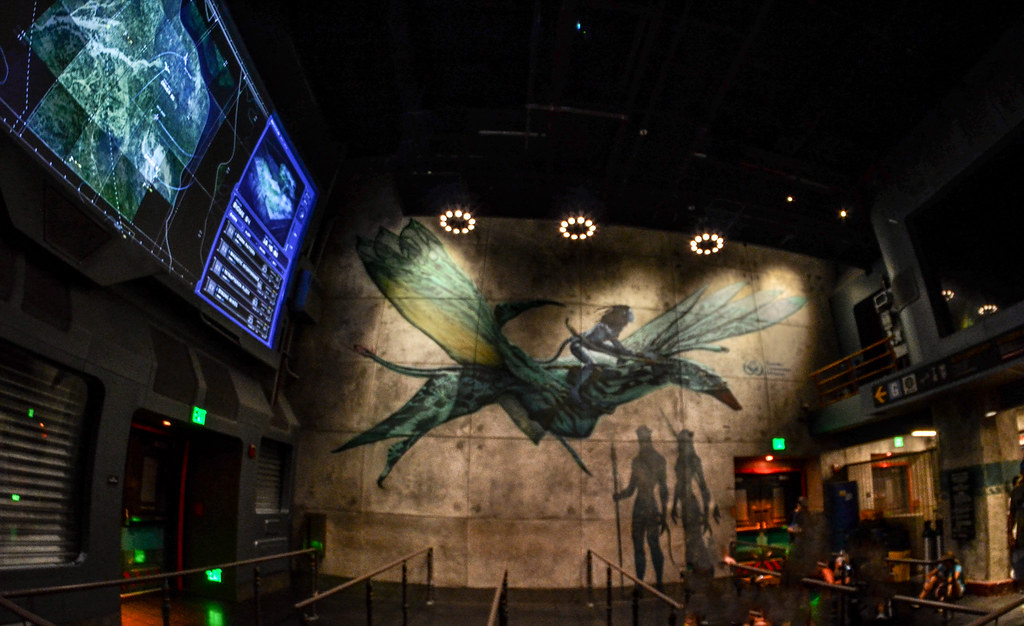 The pre-show videos for Flight of Passage is pretty dumb.  I understand that they have to connect the entire plot together but the video feels forced and awkward.  A video similar to Soarin’ would have worked better here but this tries to be a little more artistic and authentic.  I think it fails at that but it’s not enough to make the attraction worse. 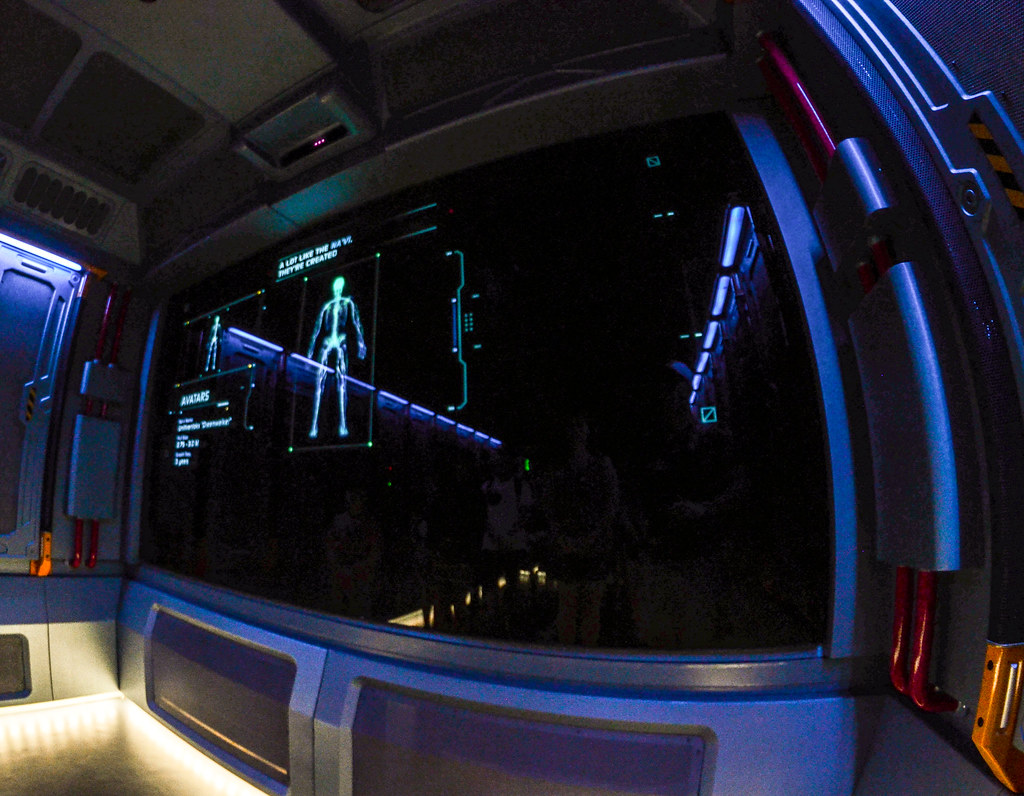 All in all, Flight of Passage is a phenomenal ride experience.

Na’vi River Journey is the other attraction in Pandora – World of Avatar.  Unfortunately, this ride doesn’t fare as well.  On the bright side this does have a very practical name.  The ride literally takes guests on a river journey.  This is somewhat of a continuation from what guests see outside throughout Pandora. 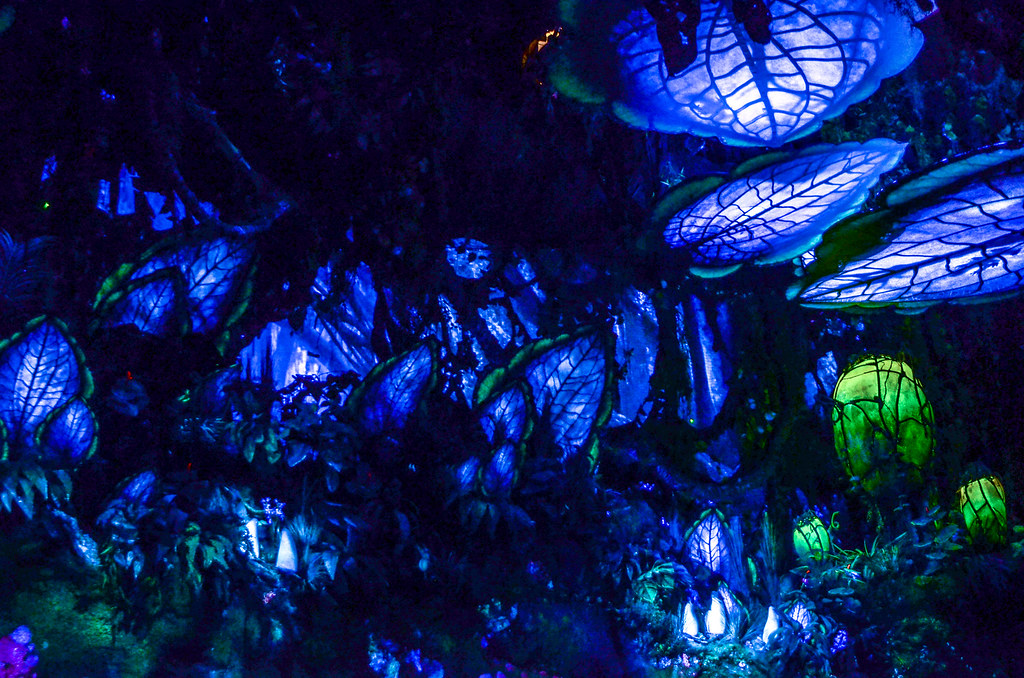 The ride is certainly beautiful as guests float down the river and see all of the bioluminescent plants.  The transition of real props to screens in Na’vi River Journey is seamless and the best part of the attraction. 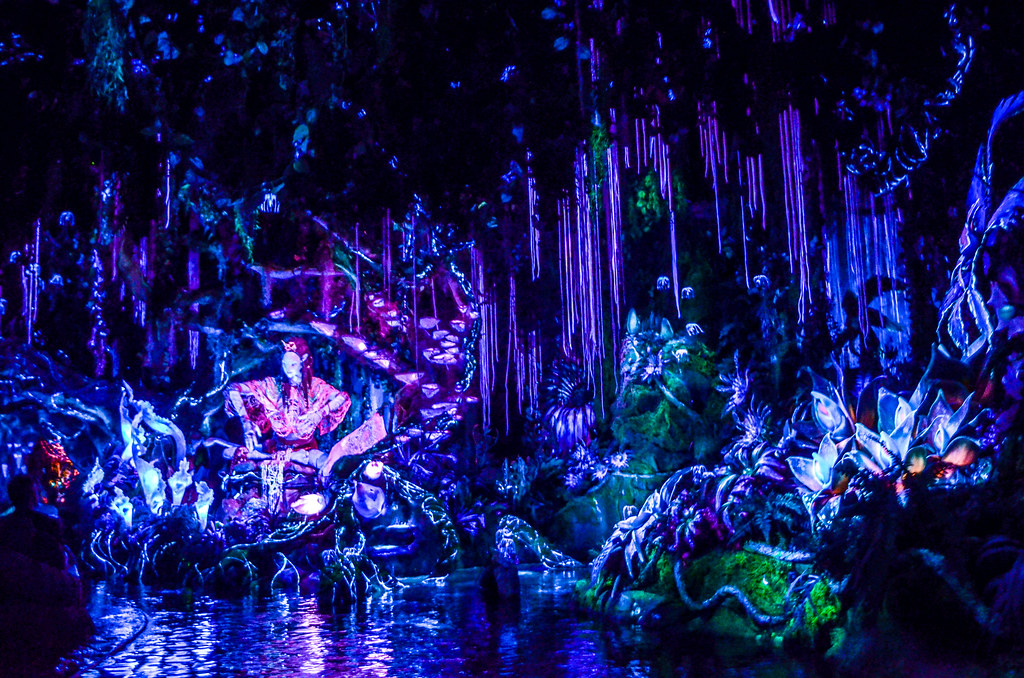 The animatronic is another bright spot in this attraction.  This is very lifelike and amazing to look at.  Unfortunately, guests barely see this and the animatronic sings a native song out of key.

There is no plot to this attraction.  I get it, guests are just supposed to enjoy the beauty of Na’vi River Journey much like they are the entire land.  But I think it’s overkill to expect a land and an attraction of the land to have no purpose.  Make something go wrong along the river and the ride becomes significantly more interesting.  Along with that, the attraction is fairly short. 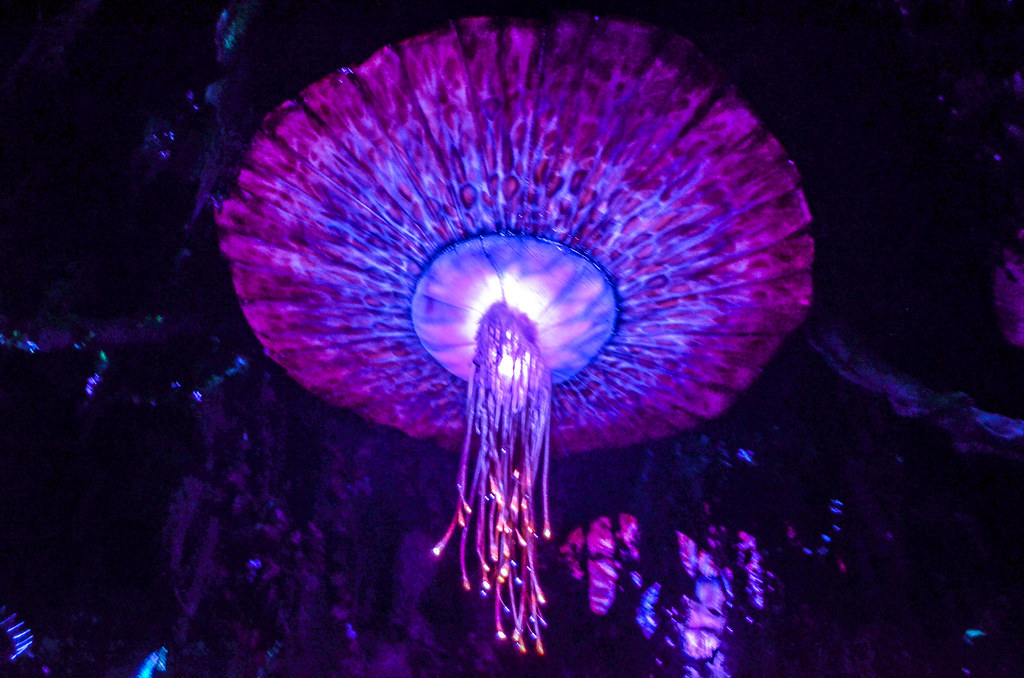 With all that said, Na’vi River Journey is absolutely beautiful.  I just don’t think the attraction is as re-rideable as some.  The attraction isn’t worth a long wait unless it’s your first time on it.

Overall, the attractions in Pandora – World of Avatar are a pleasant surprise.  Flight of Passage is a top-ten attraction in Walt Disney World and a true E-ticket.  Na’vi River Journey isn’t much but will be a fine addition once lines die down. 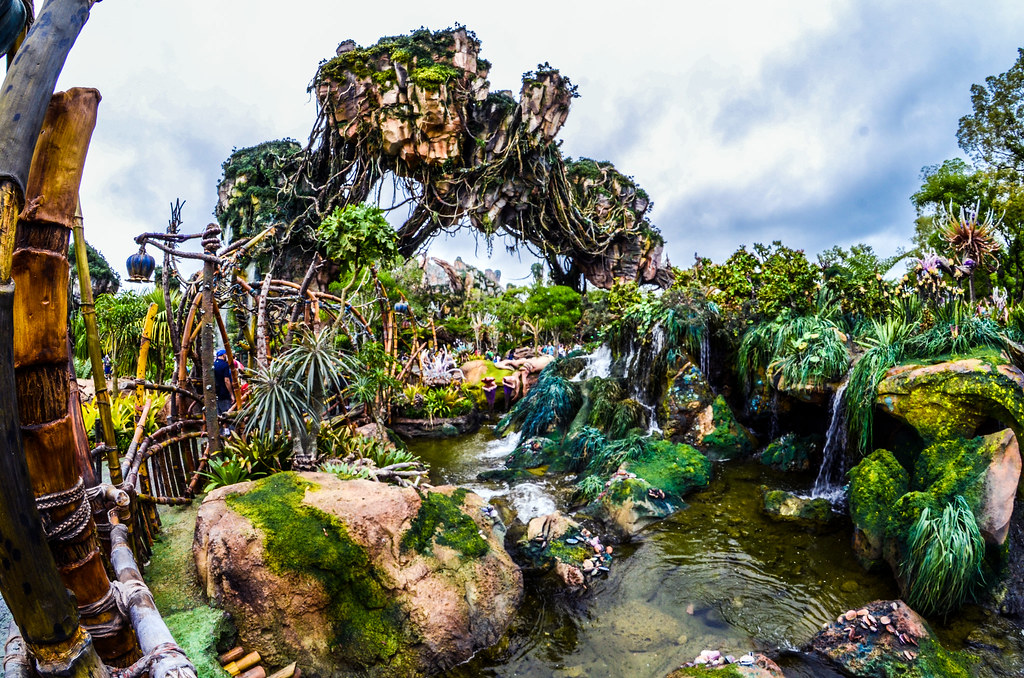 Both the aesthetic and attractions (along with the dining) make Pandora – World of Avatar an unbridled success.  The land is jaw-droppingly gorgeous with a top-tier counter-service restaurant and attraction.  There were hardly any drawbacks to Pandora and the area fits the rest of Animal Kingdom well. 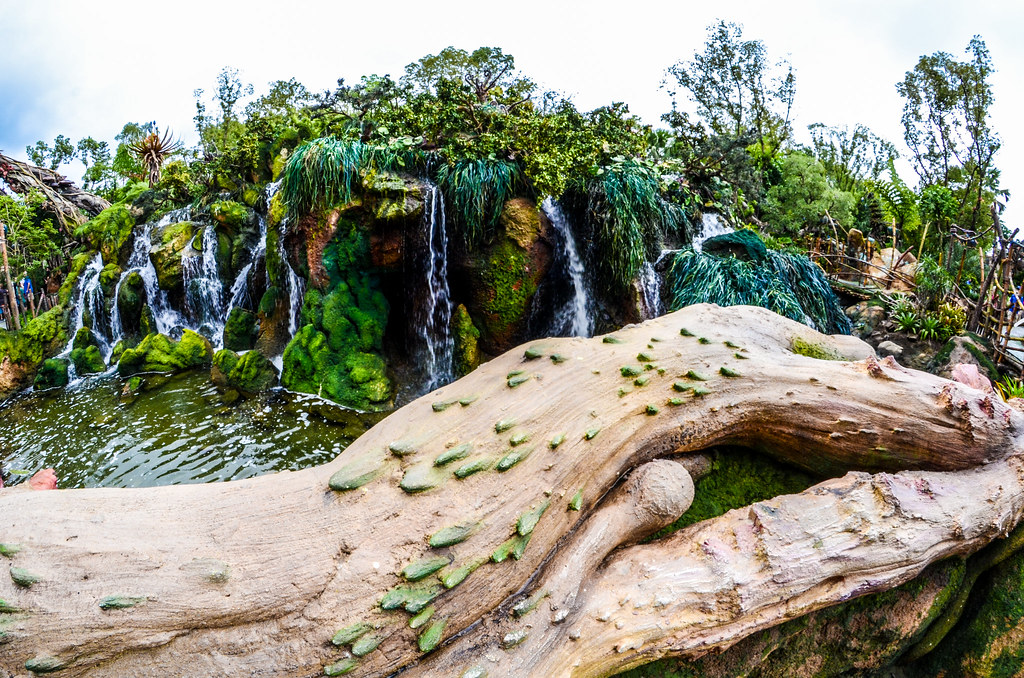 Have you seen Pandora – World of Avatar or have any questions about it?  Let us know in the comments if you do!  Thank you for reading Wandering in Disney, if you enjoy what you’re reading please subscribe to the blog and like our social media pages.  You can do both of those things on the right side of this page.  Have a great day!