The Wild Africa Trek is a tour at Disney’s Animal Kingdom.  This tour takes guests behind the scenes of the park’s signature attraction – Kilimanjaro Safaris. Wild Africa Trek is offered daily to guests who have park admission, although making a reservation in advance is a must-do.  The tour generally costs around $200 but they do offer discounts from time-to-time and will always offer discounts to Passholders, DVC members, and Disney Visa Card holders.  The tour lasts 3 hours.  This review will cover our experience on Wild Africa Trek. 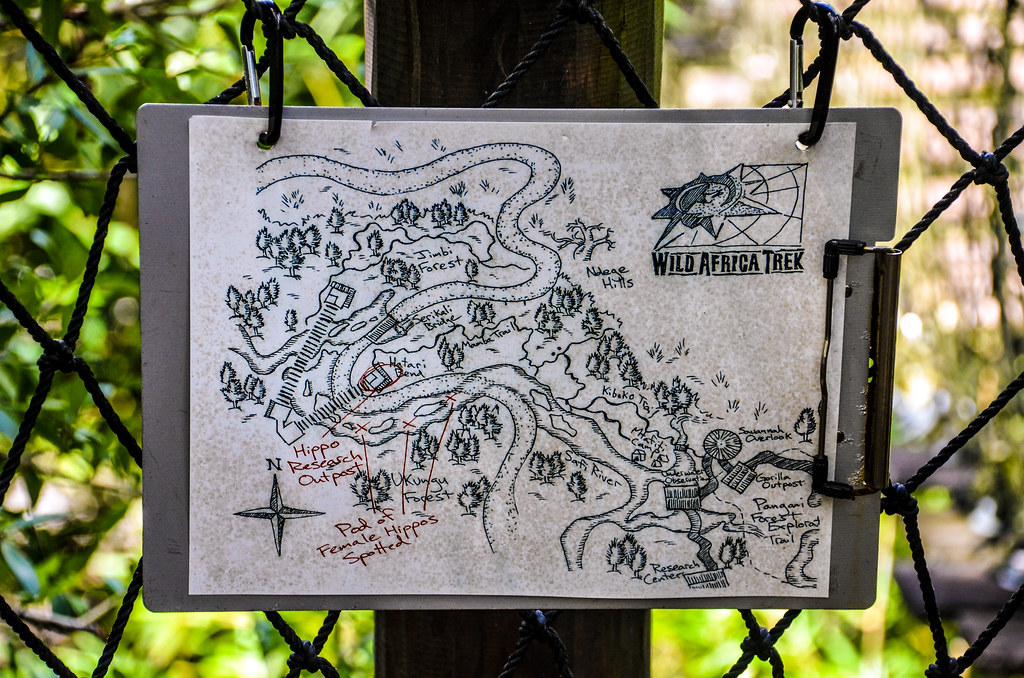 Melissa and I went on the Wild Africa Trek at the end of August.  Hardly the best time of year, weather wise, to be hiking around the Florida savannah.  But, as I will hopefully convey over the next few hundred words, there is never a bad time to sign up for this tour.  We even lucked out and had some cloud cover to avoid the incredible heat.

We checked in and before long were getting situated for our tour.  Unlike most (any other) tour, the preparation here does take a while.  Guests can’t have any loose items on them as things falling out of pockets or backpacks could be hazardous to the animals and would certainly be hazardous to whatever you just dropped.  We stowed our loose belongings in a locker.  You can bring your phone and camera, as long as you have a strap for each item.  They will give you a strap for your phone if you would like it, as well as a strap for your sunglasses. 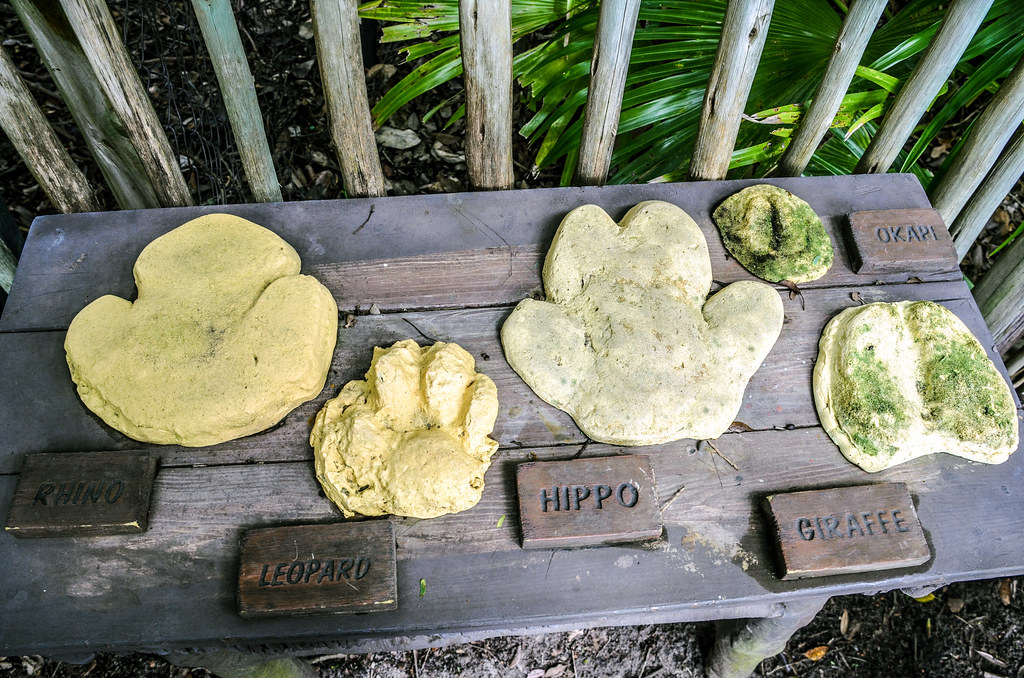 Since no loose items were allowed, I wasn’t able to bring any extra lenses with my camera.  This isn’t a big deal but something to be aware of.  They also don’t allow lens caps, as they could fall off.  While on this note, the tour guides do bring a camera with them and will take photos of you and the animals for you to share with your friends back home.  The photos are very high quality and, unless you love taking photos like I do, I would recommend just going without a camera as it’s just another item to carry.  (With that said, all of the photos in this blog post are mine.)

Guests get a harness and vest to hold you and your water bottle (complimentary and good souvenir!) along with any other items.  Here’s a look at the model (my wife) I brought along with me all geared up. 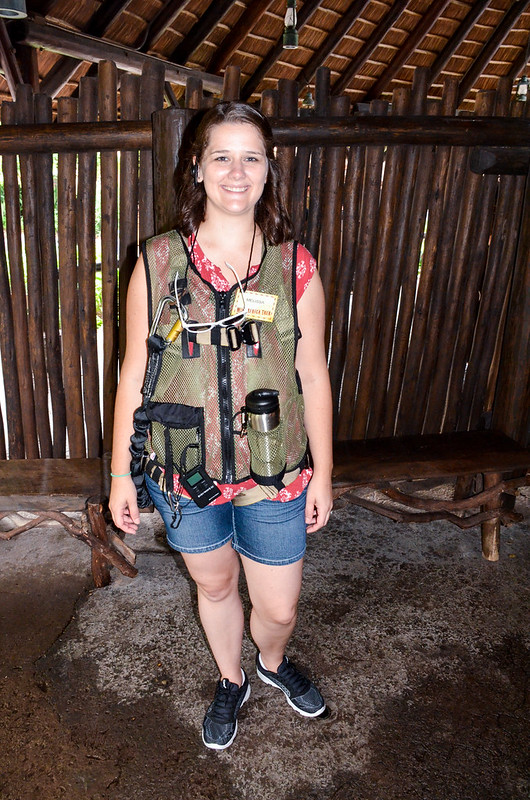 The harness isn’t very heavy and not much of a nuisance.  The vest is very lightweight and was a nice way to not have to hold anything.  We were each given an ear piece and then went on our way.

We had two tour guides on Wild Africa Trek, Becky and Alex.  Both were wonderful.  The trek starts on the Gorilla Falls Trail in Animal Kingdom’s Africa section.  This trail is open to guests not on the tour as well and is a great place to explore.  Going through this area with guides was really enjoyable, as they were able to share more information than you can gather just by reading the signs on the trail.  While far from the most exciting aspect of the tour, this was a nice appetizer to the main course.

That main course was being backstage in the Kilimanjaro Safaris.  After our brief walk through Gorilla Falls we went off the beaten path, walking through trees and such until we ended up above the hippo pool.  Disclaimer: Hippos are my favorite animal so there’s a bunch of photos. 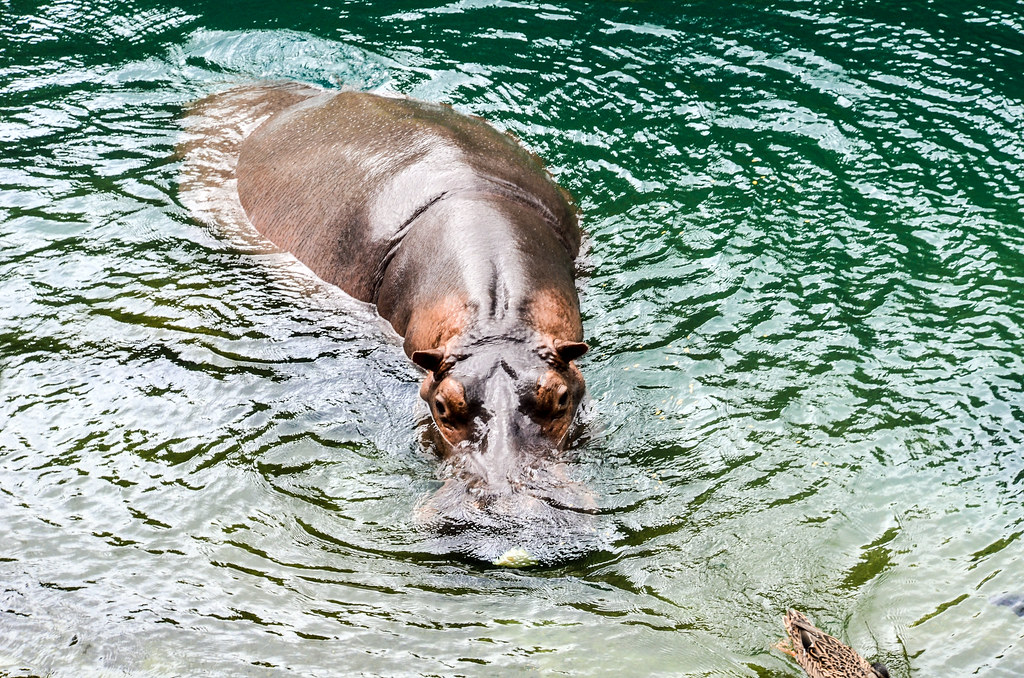 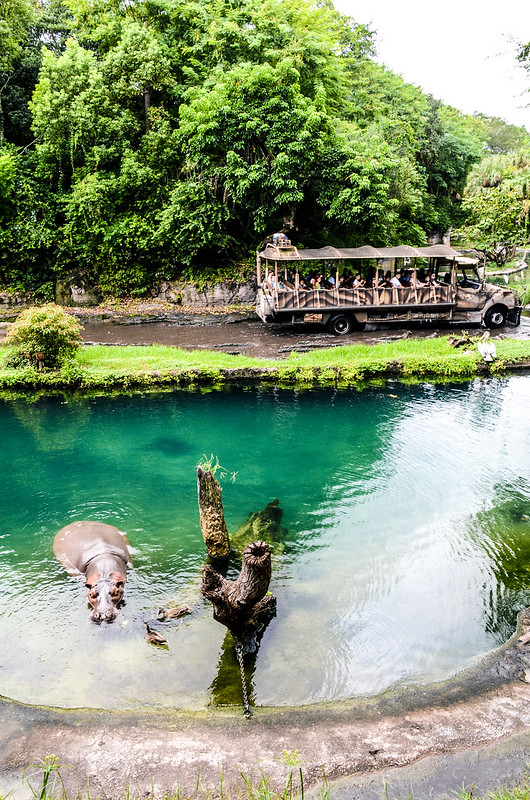 We ended up on a little ledge above the hippo pool and got harnessed in.  We then were able to walk out on the ledge as a resident hippo expert (sorry, I forgot her name!) came to feed the animals.  The hippos were not all that interested in the food but they one of them came over near us anyway.  I really appreciated how the tour brought in someone who works directly with the animals to talk about these.  Our guides were very knowledgable but had a broad understanding of all the animals while this lady was more focused on these particular hippos. 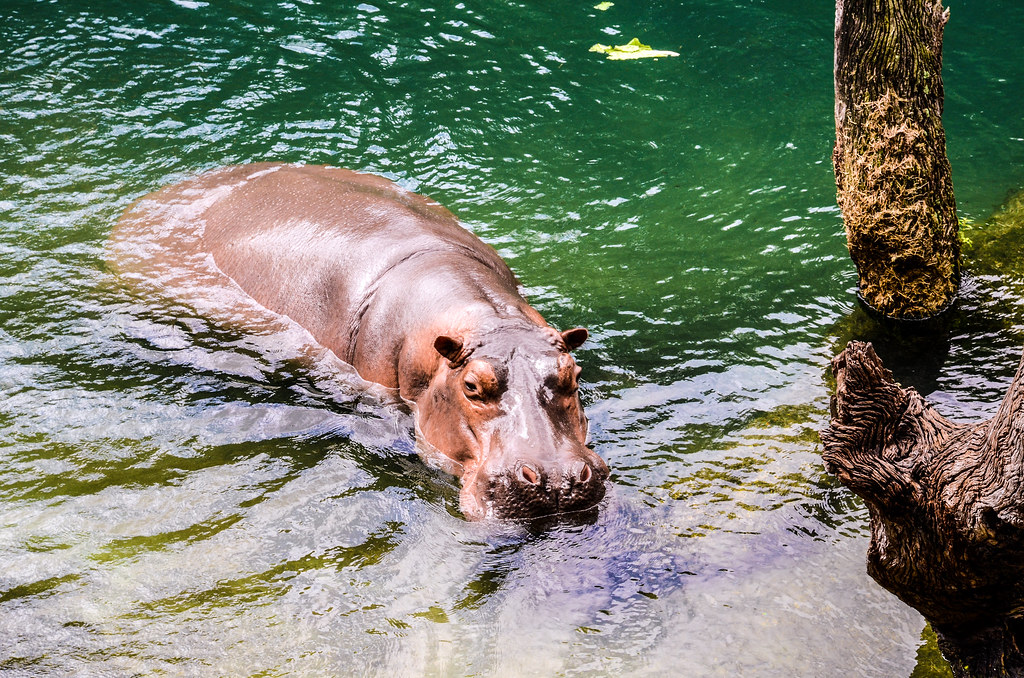 I’m guessing I’ll never be this close to a hippo again outdoors.  That’s both sad and fortunate. 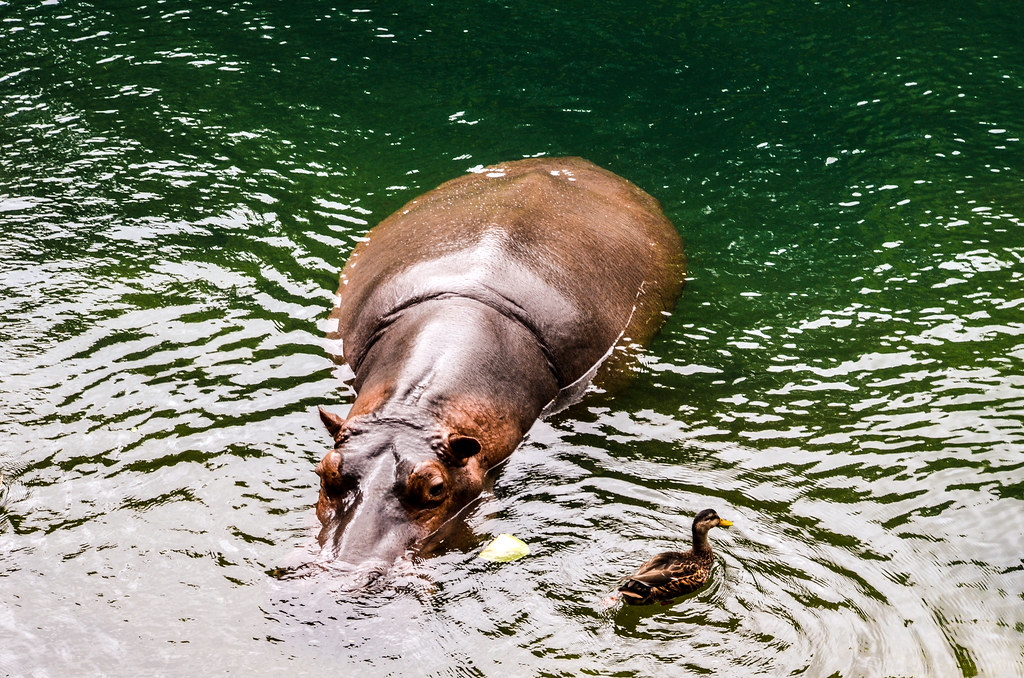 Another thing to note about these stops near animals were how long they lasted.  I never felt rushed through these areas and we were given ample time to learn and ask questions.

After the hippo pool came Wild Africa Trek’s most iconic feature, the suspended bridge over the Nile Crocodiles.  I don’t love heights but this bridge wasn’t all that scary.  Like Kilimanjaro Safaris, there was never any build-up of fear here.  Safety was shown time and time again so the thought of falling off this bridge to your death was far from our minds.  At least it was far from mine. 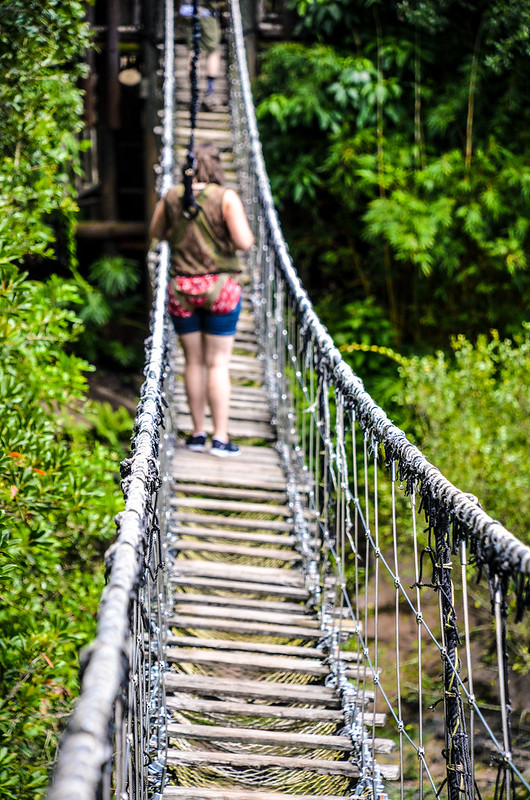 The whole tour is fairly aggressive as far as Disney goes.  There are trails with little drops and limbs to duck under.  I felt like I was out in the forest when walking around.  The bridge was not hard to walk across but you did have to watch your step.  All this to say, I think most anyone could do this tour but don’t expect a leisurely walk on the red carpet.  There’s no red carpets in the forest.

The whole experience on the bridge is fantastic.  I could try to describe it but I’ll just show you what we walked over and you’ll get the idea. 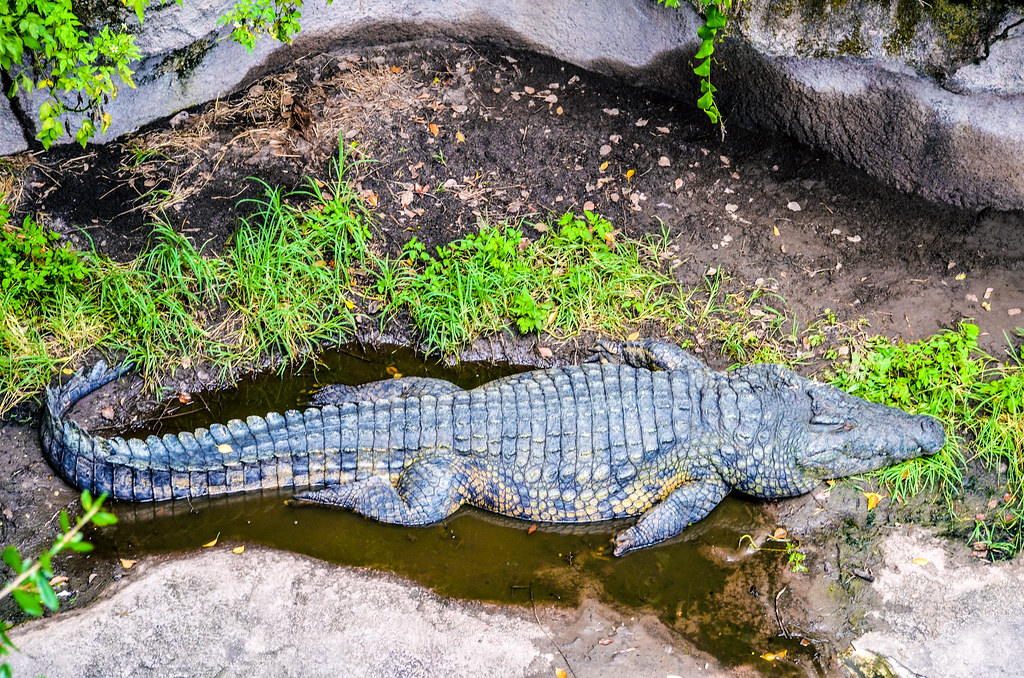 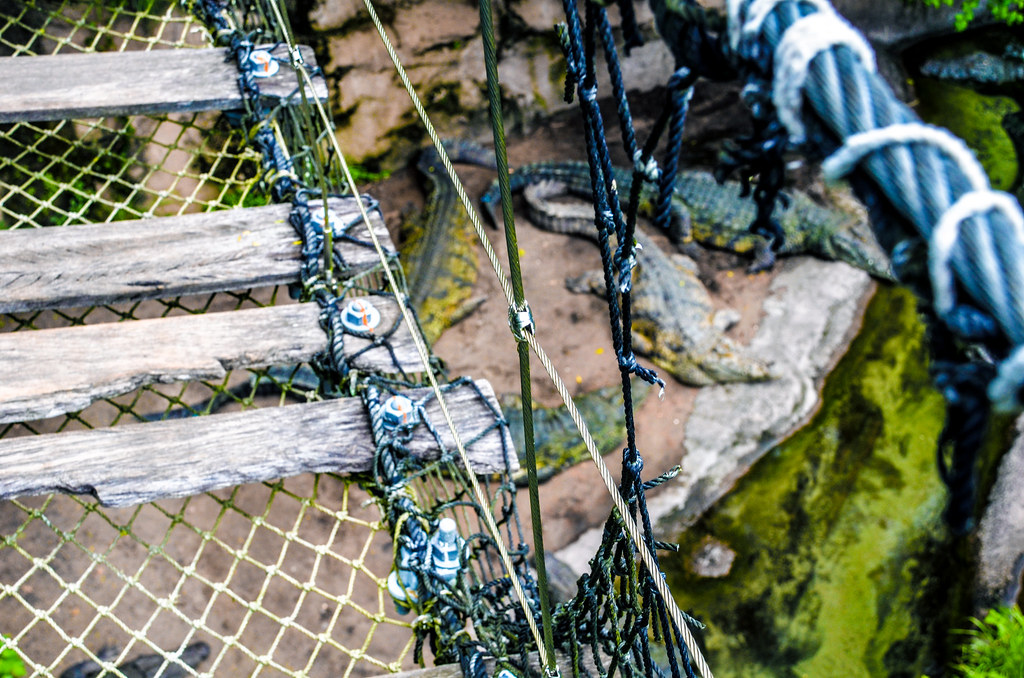 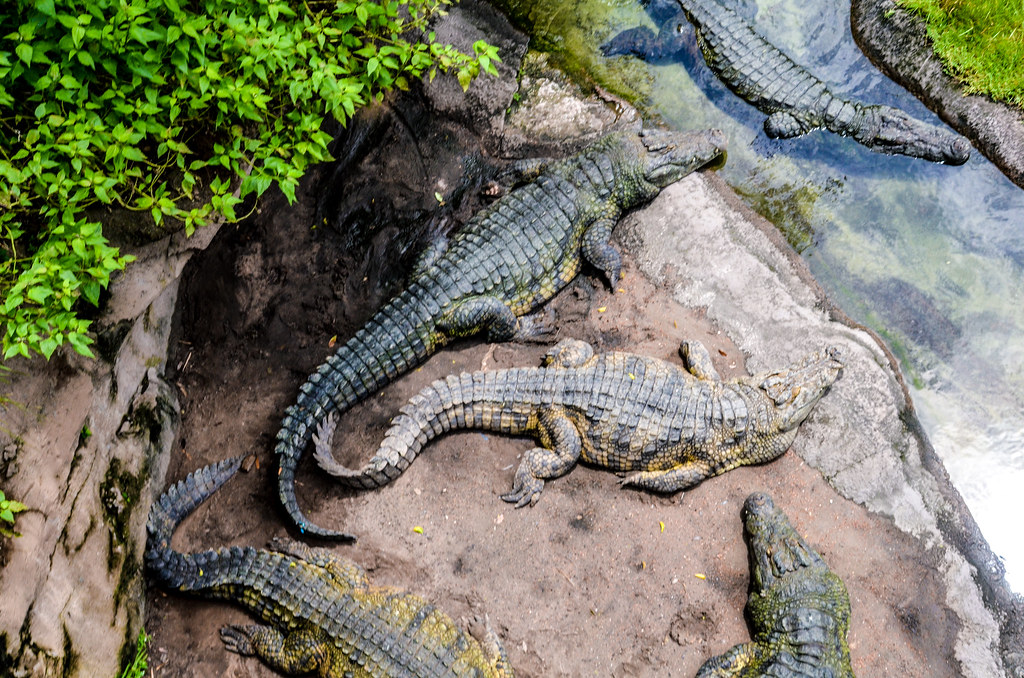 This was easily the most thrilling part of our journey.

Once off the bridge, we spend a little more time by the crocodiles with another expert.  Crocodiles are pretty fascinating.  This guy (again, sorry about the lack of name.  I do remember he was about to get married so congratulations!) told us that there wasn’t much in the way of crocodile research until the last 30 or 40 years so they weren’t even sure how old some of their own crocs were.  They had estimates and guesses but had no way of knowing.  There were many facts he told us and being out on another ledge right by the animals was fantastic. 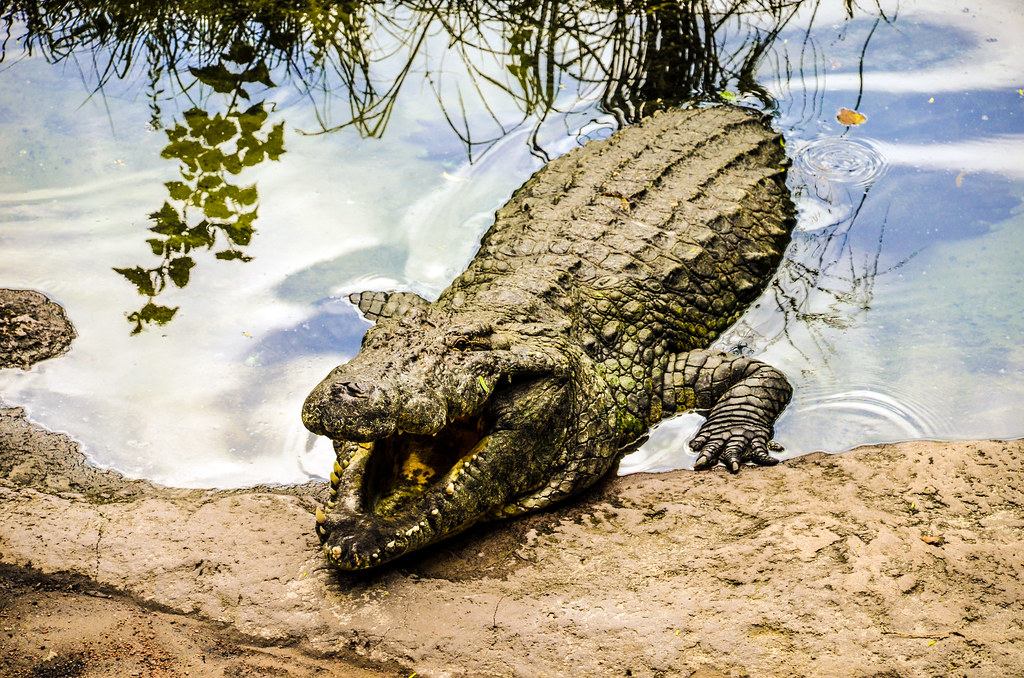 Soon after this we were able to lose our harnesses and board a truck waiting for us.  The rest of the tour took place in the savannah section of Kilimanjaro Safaris.  At this point we were back on the ride almost but were able to stop wherever Becky and/or Alex thought was a good vantage point.  This led to many photo stops and even more facts given and questions answered. 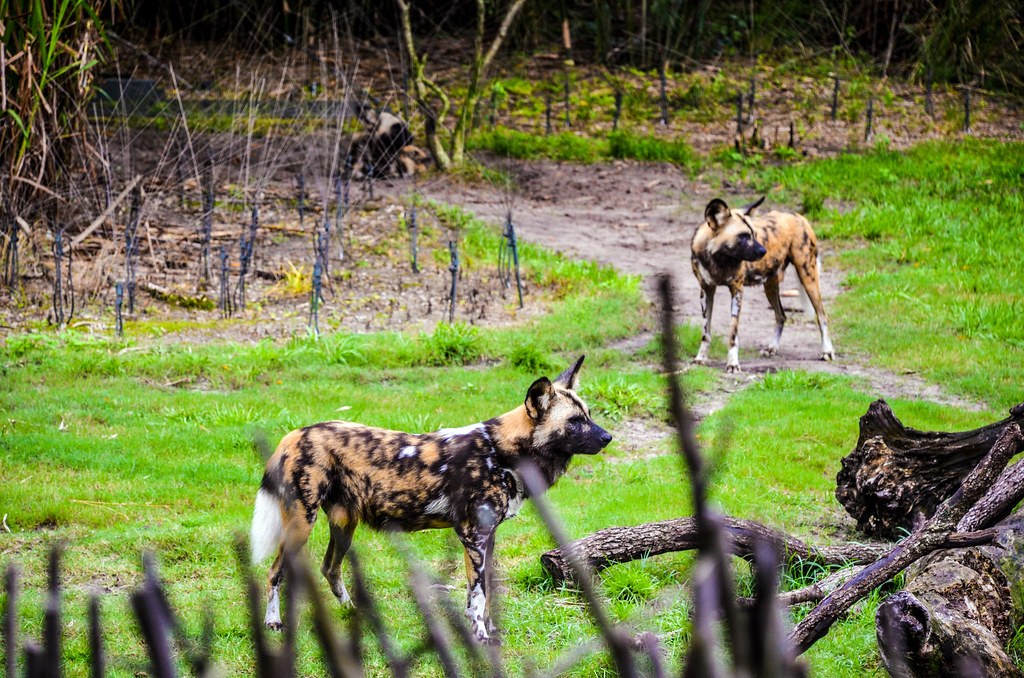 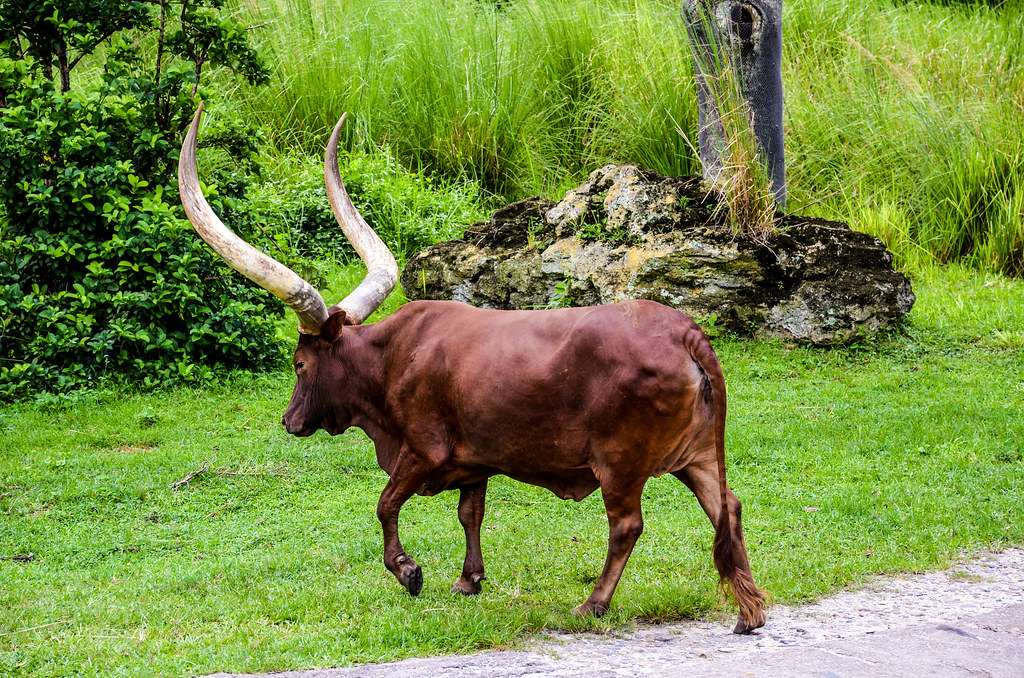 Learning not just about the species of animals but some of the actual personalities of the animals we were seeing was fascinating.  The animal above has tendonitis and is a favorite among the safari crew.  She(?) would later poke her head through the bushes at us, a few minutes after one of our guides said that’s what she liked to do. 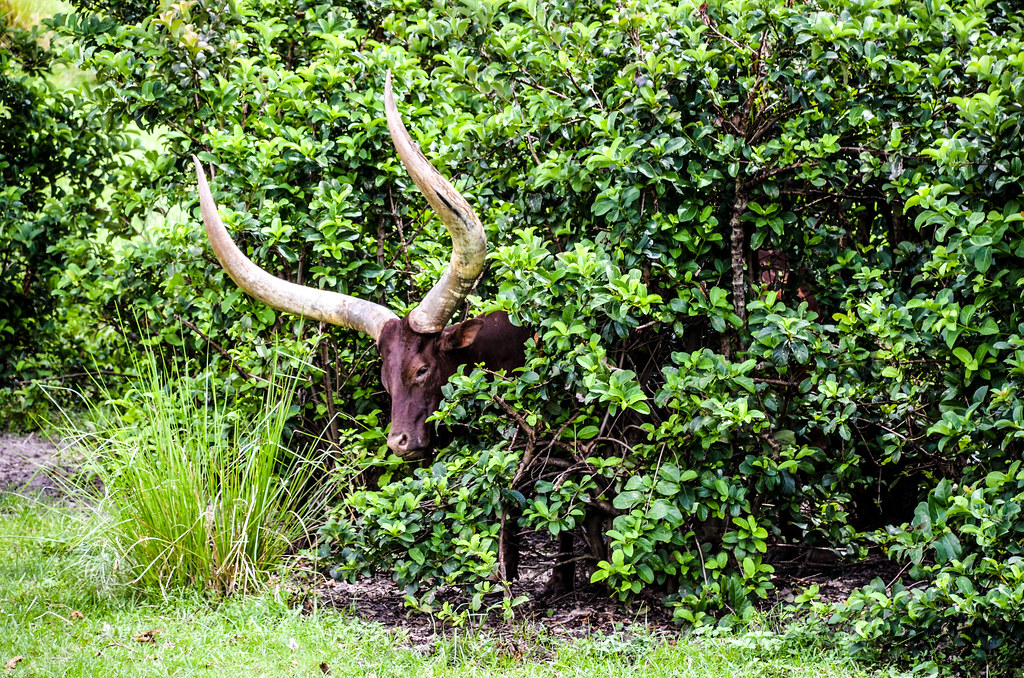 All of the giraffes were hanging out in the trees.  On the safari, this would be a bummer as there wouldn’t be much time to stop for photos and facts.  On the tour we were able to stop for nearly 15 minutes and learned a great deal. 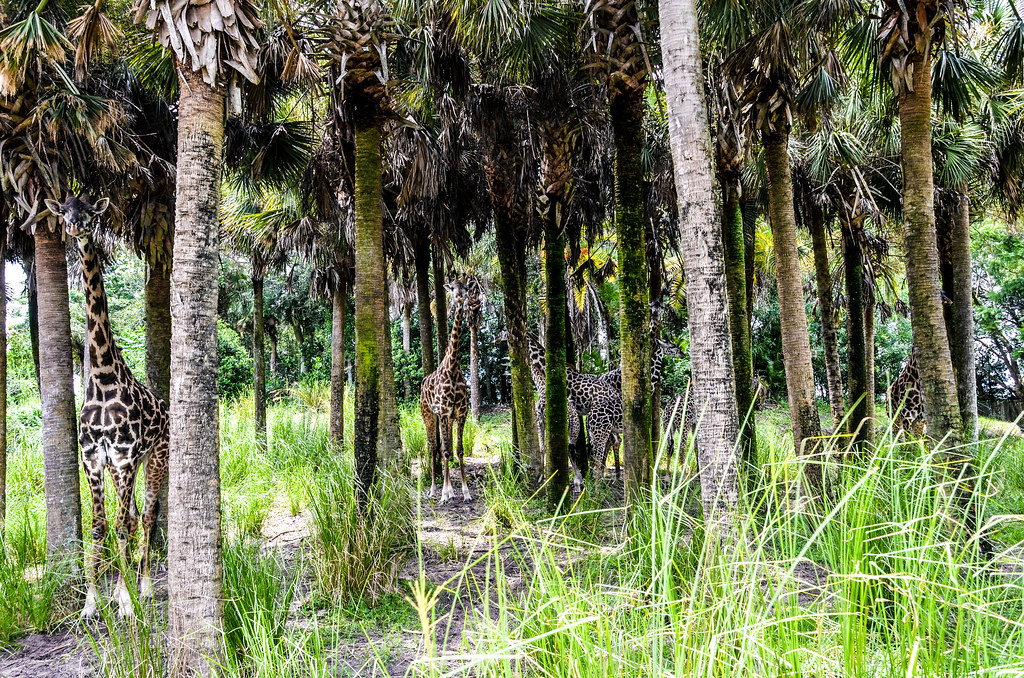 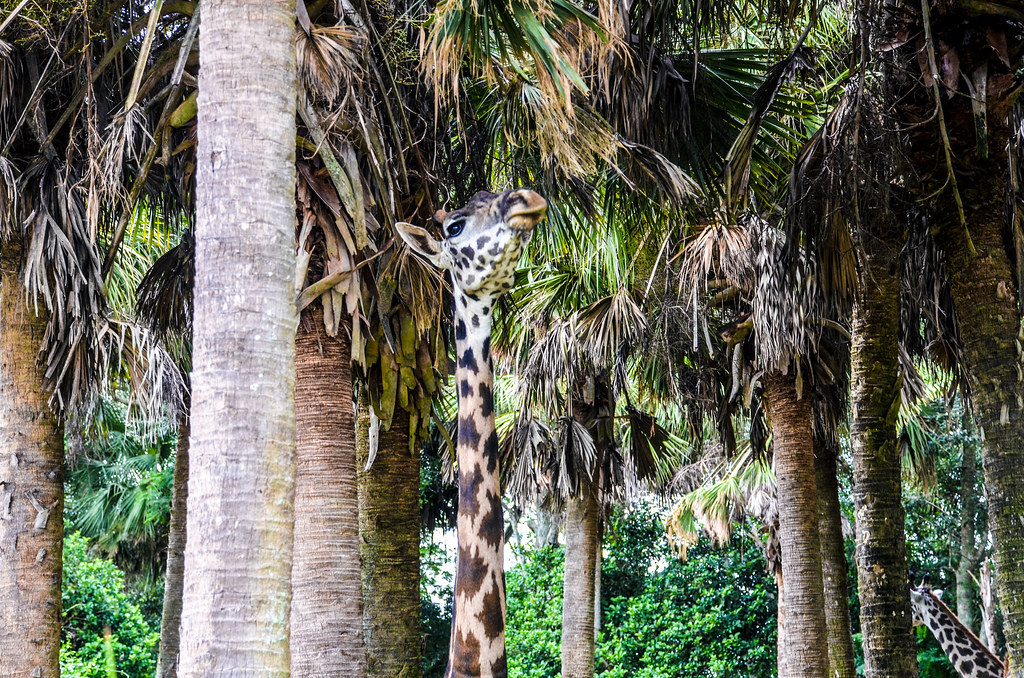 We made our way over to the elephants and did the same thing here as with the giraffes. 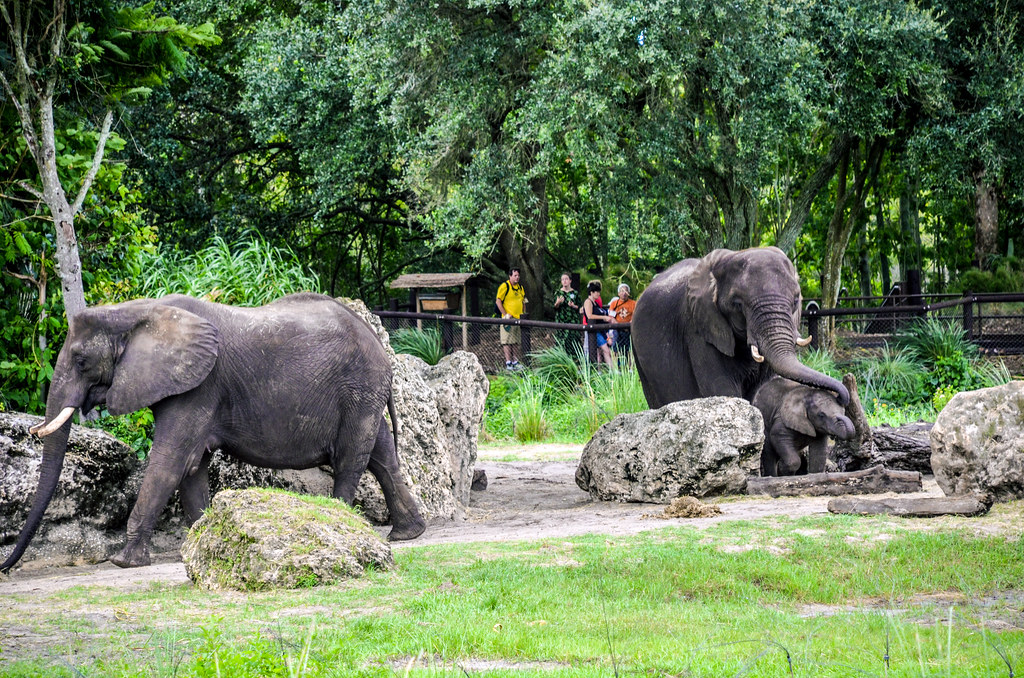 I’m glad we were able to do this when Stella, the baby elephant, was still little. 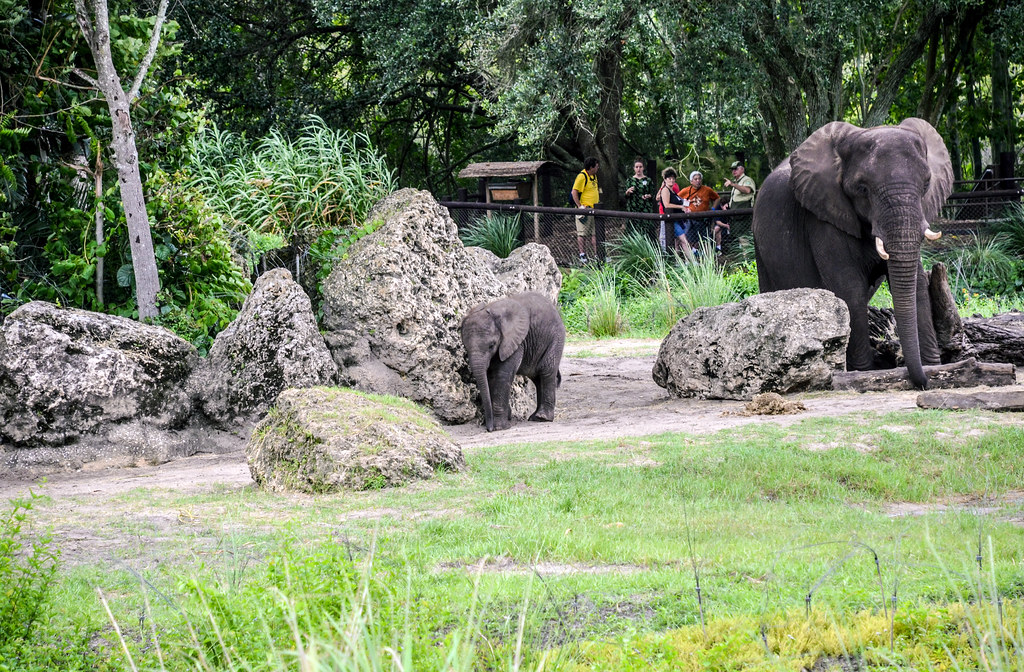 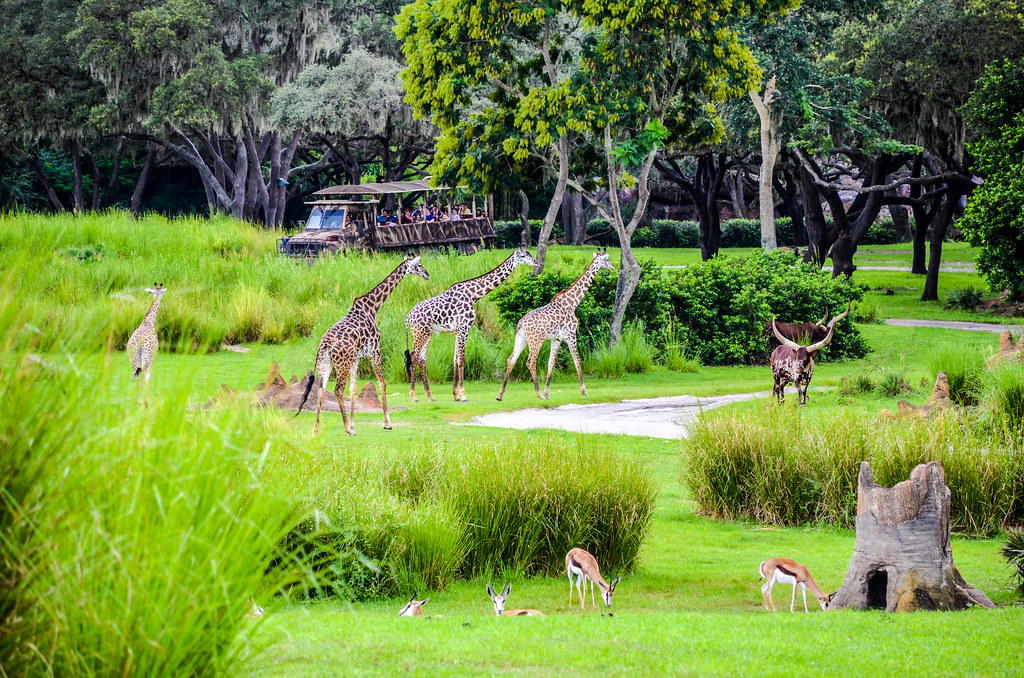 We were roughly 2 hours into our tour and it was time for a break.  We stayed in the savannah and stopped at a little lookout to have a snack.  This building is visible from the safari ride and was an aspect of the tour I was really looking forward to.  Nothing about it disappointed. 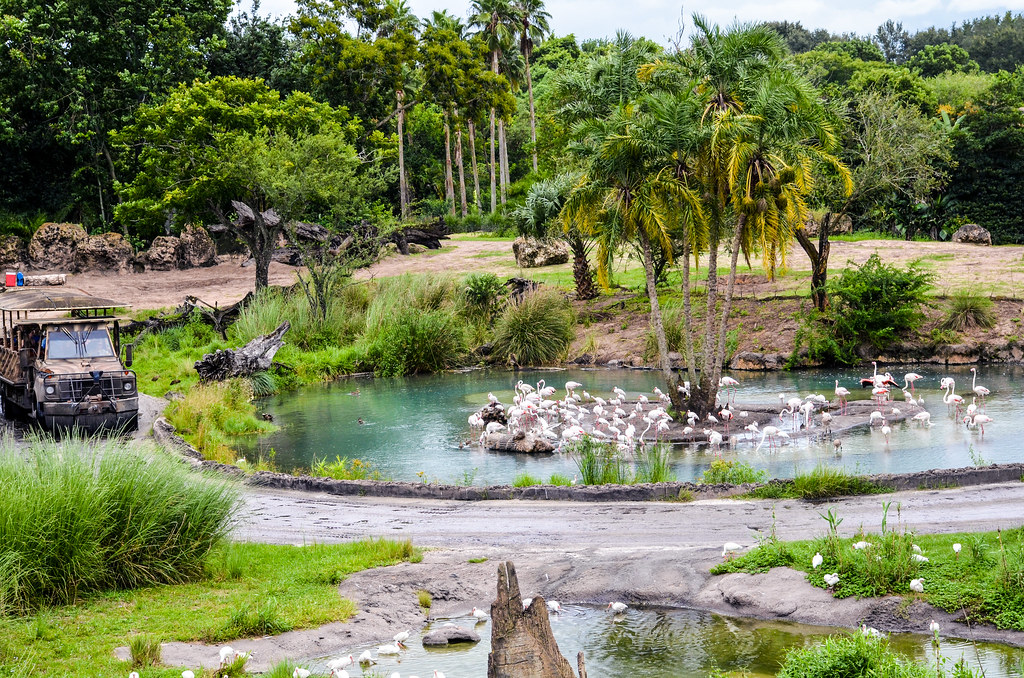 The view was incredible, as you could watch any of the savannah animals wander around.  We all had binoculars to share and this was a great spot to look around.  There was so much to see and enjoy.  While the first hour of the tour is all on your feet, this was as relaxing as it can get.  I would have been happy to stay here all day. 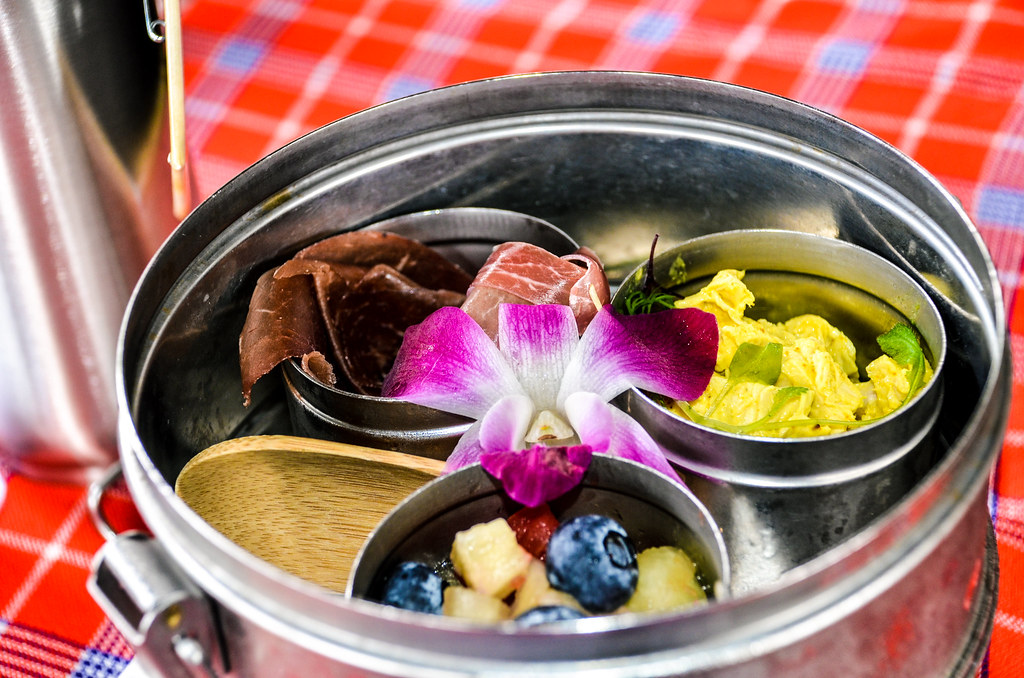 And I haven’t even mentioned the food… There were six small items served in this container.  The highlights were the chicken curry salad, the shrimp and the fresh fruit.  I enjoyed all six of them.  My wife is a slightly pickier eater than I am and she still enjoyed them all.  They call this a snack on the tour but there is enough here to consider this lunch.  I believe that if you go on an earlier tour the food is slightly different.  I really enjoyed this, as I thought it added to the authenticity of the experience. 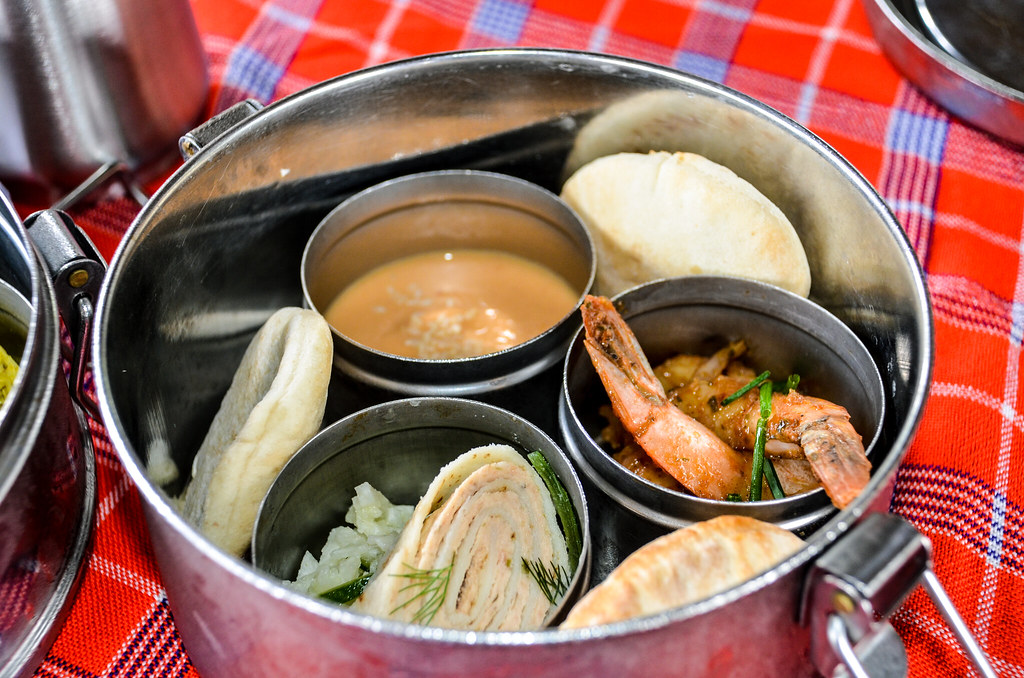 After we ate, we took a few more photos and headed on. 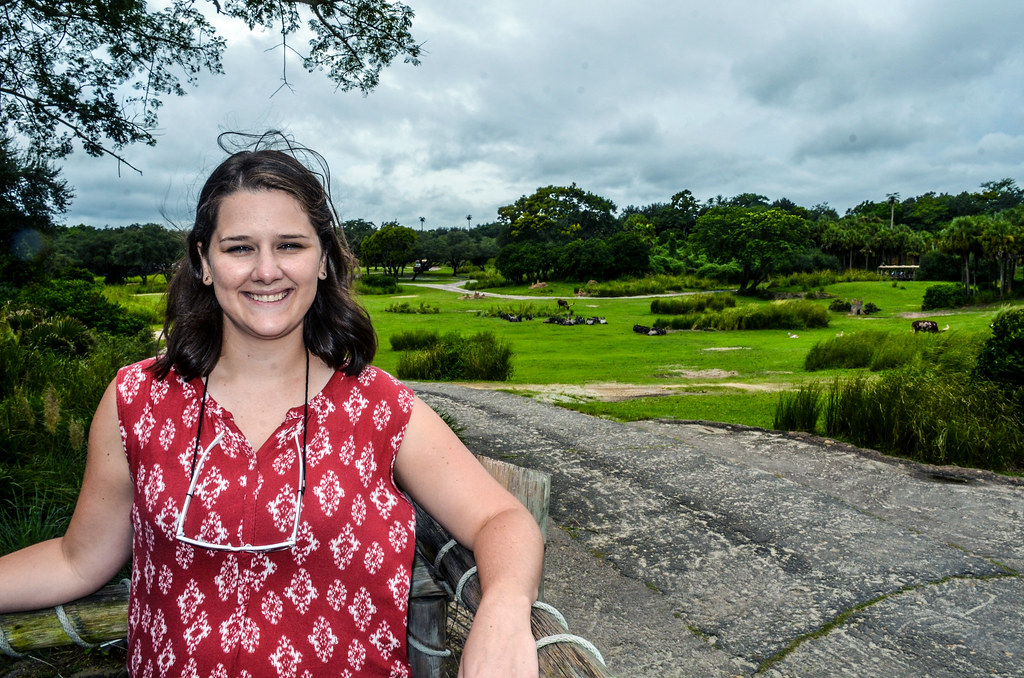 We saw a few more animals before we headed back to where the tour started.  Even as the tour was winding down, I can say without hesitation that the experience did not feel rushed in the slightest.  There was always time to have questions answered and time to stop and see an animal. 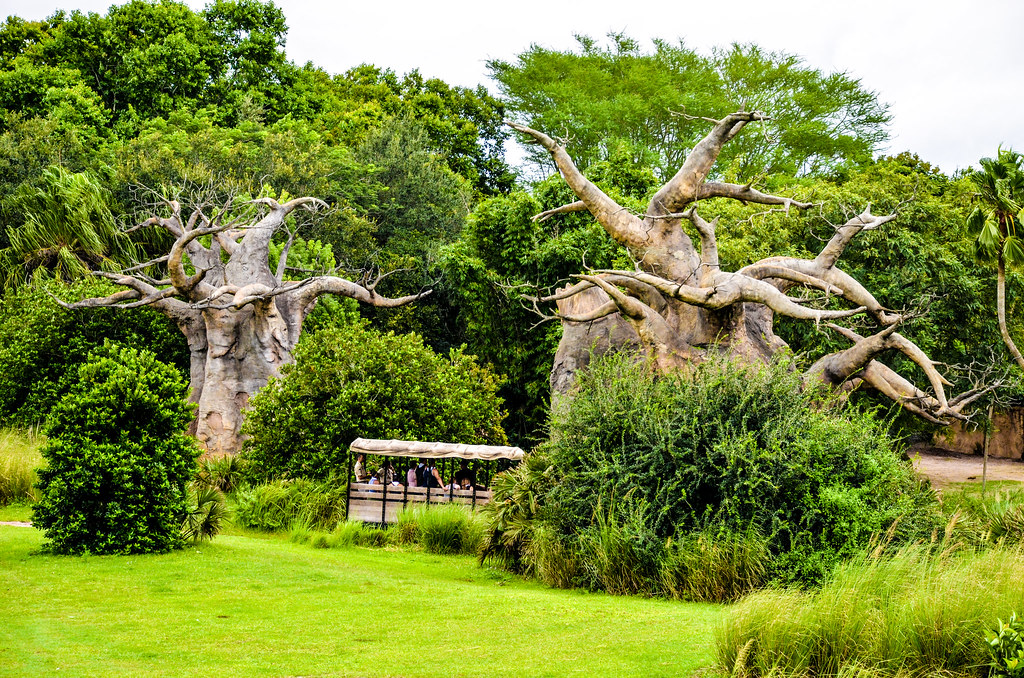 On top of that, our guides and the tour itself were very accommodating.  There were towels to cool off with after the hot parts of the tour, ponchos for when it rained, water bottles, and more.  The service on Wild Africa Trek was tremendous and part of the reason the tour stood out.  Becky and Alex were very kind, gracious and knowledgable.  While I’m sure the experience is conducive to this, I appreciated that there wasn’t really a spiel that our guides had to say.  Rather they reacted to what was happening with the animals (or our questions) and would talk about that.  If you’ve been on other tours then you probably know that at times it feels like the guide is reciting something they have said thousands of times.  While there’s nothing wrong with that, this experience felt more unique than that. 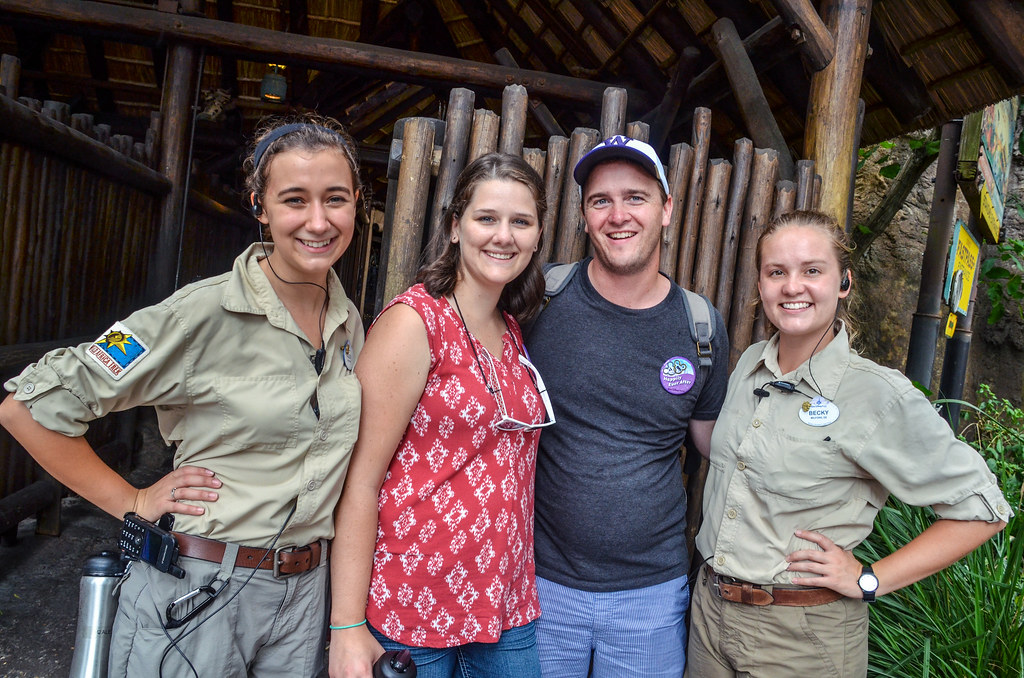 Well, as you may have guessed by now, I love Wild Africa Trek.  But, was it worth the money?  Yes, absolutely.  I would do this again in a heartbeat.  Now, I know that it is pretty expensive so definitely look for discounts but this is a premium experience that was worth every penny in my mind.  The obvious caveat to this is if you could care less about animals then this probably isn’t for you.  Otherwise, I have a hard time seeing anyone not enjoying this experience.  Of all the days I’ve spent at Walt Disney World, this was near the top.

Have you been on Wild Africa Trek or have any questions about it?  Let us know in the comments!  Thank you for reading Wandering in Disney, if you enjoy what you’re reading please subscribe to the blog and like our social media pages.  You can do both of those things on the right side of this page.  Have a great day!