Trail’s End is a restaurant at Fort Wilderness Resort in Walt Disney World.  The restaurant features a buffet that is open for both breakfast and dinner, as well as brunch.  Brunch largely consists of the breakfast items as well as some dinner options.  Trail’s End counts as 1-credit on the Disney Dining Plan and does accept Tables in Wonderland and Annual Pass discounts.  We recently had brunch at Trail’s End, this review will cover that meal. 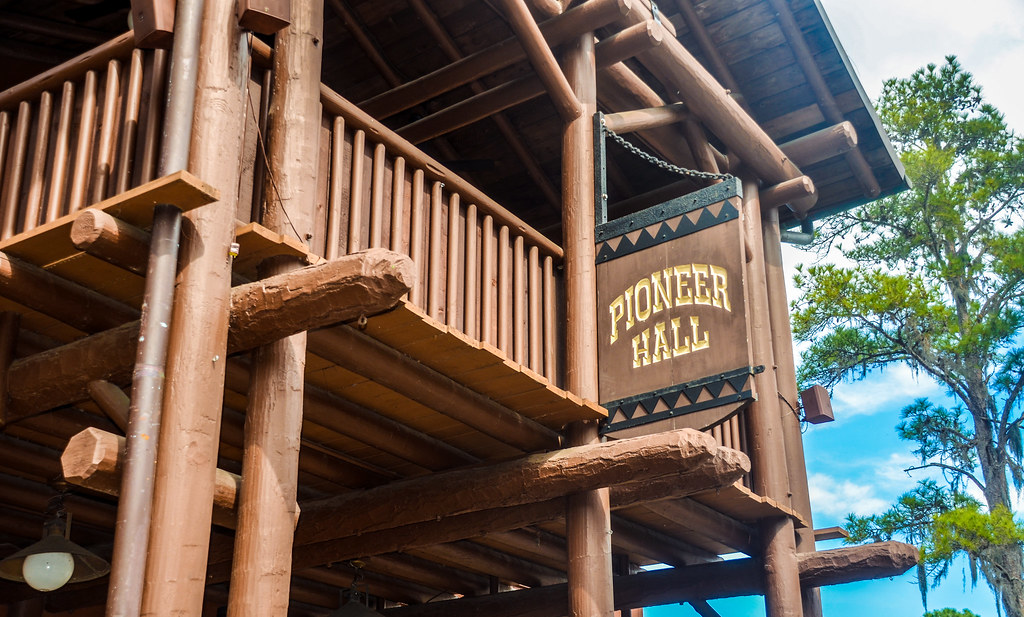 Fort Wilderness definitely does not lack in character.  If you walk around the campground and cabins enough it’s easy to forget that one of the biggest tourist destinations in the world lies a mile or two away.  The campground has no shortage of critters running around and many paths to explore.  The building where Trail’s End resides is Pioneer Hall, the home base of Fort Wilderness.  To get here you will either need to walk 20 minutes (or so) from the bus stop, take internal busses from the bus stop or take a boat from Magic Kingdom.  If you’re at Magic Kingdom or one of the resorts nearby I would definitely recommend the boat.

The inside of Trail’s End fits the rest of Fort Wilderness.  A southern charm mixed with a western exploration feel, Trail’s End could double as a place to grab some food after a day hunting or hiking.  The restaurant is rustic and charming, featuring a few rural items on the wooden walls.  I thought the inside was quite beautiful, although the TV’s at the bar take a little bit out of the environment.  The seating layout was a little squished, especially considering this was a buffet.  These are just minor quibbles though on what is a fun, beautiful environment. 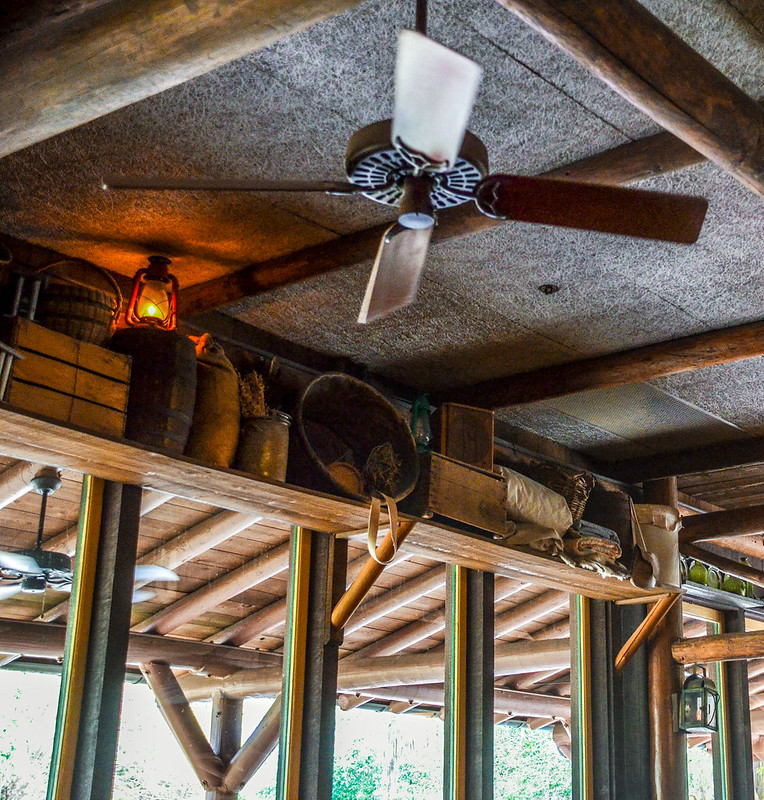 Unfortunately, the food didn’t live up to the rave reviews I’d seen of the restaurant.  Full disclosure: We ate here after we finished our half-marathon so my body was probably somewhat out of whack.  I thought I was extremely hungry but didn’t actually eat as much as I thought I would.  My parents dined with Melissa and I and they didn’t run the half-marathon.  They too thought the food was nothing special.  With that said, let’s take a look at some of the highlights of the buffet.  Here’s a link to the menu before I forget! 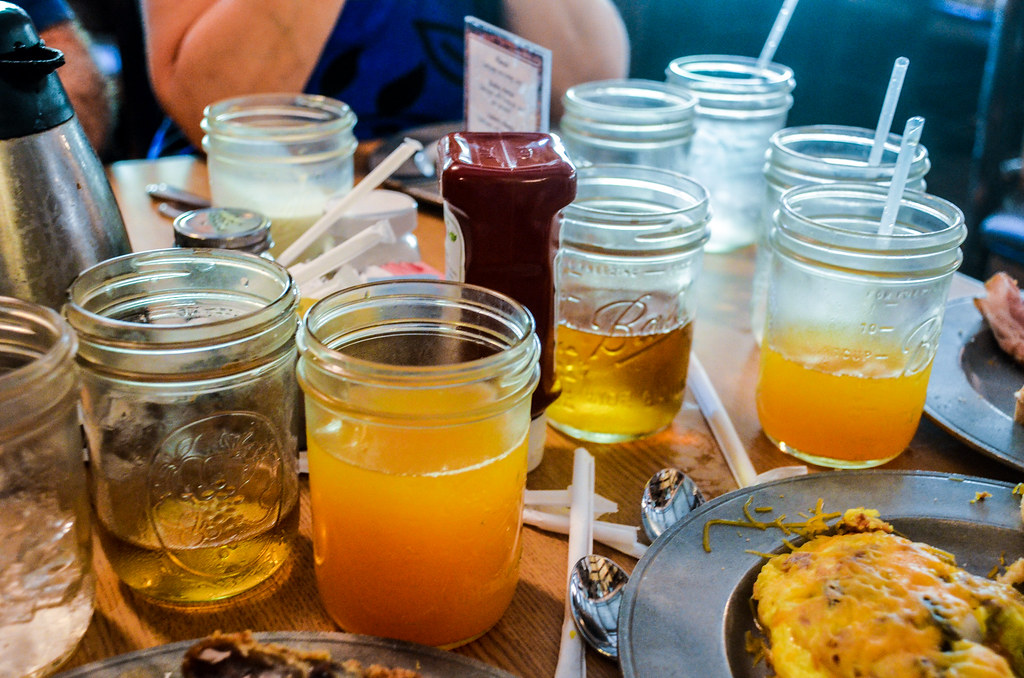 As you can see, we were thirsty.  We’ll start with the highlight of the meal for me… The juice!  This juice goes by many names, here it’s called Moonshine.  Don’t worry, this is legal in all states and doesn’t contain alcohol.  The juice is a mix guava, passionfruit and orange juice.  It’s delicious.  Moonshine also goes by the name of Jungle Juice over at Tusker House in Animal Kingdom.  Order this and many other drinks, as it already comes with your meal. 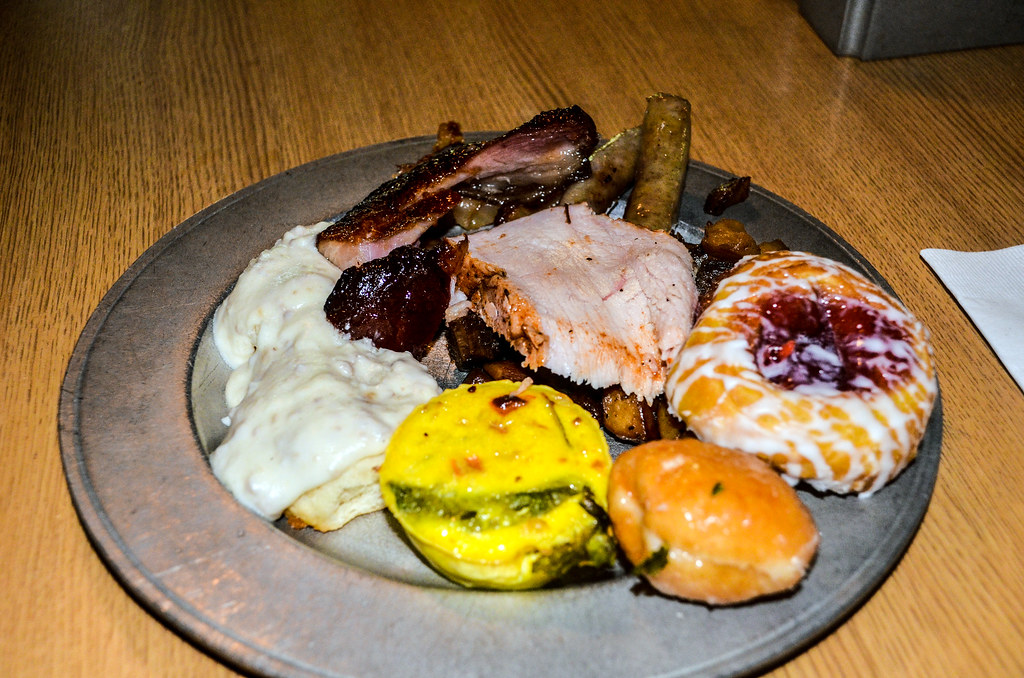 Here’s a look at my first plate from the buffet.  As you can see, there’s quite a bit going on here.  Don’t judge me.  Let’s knock out these items quickly.

The pastries were nothing special.  Don’t get me wrong, they were still delicious because they were pastries but nothing out of this world.  Same should be said about the biscuits and gravy.  The biscuits were decent but had been sitting out for just a little too long.

The egg looking item was called a breakfast pizza and was one of the better items offered.  It was mostly egg but had some nice spices on it that made it interesting.  Likewise, the ham was juicy and delicious.  This was at the carving station and was a definite highlight

Keeping up with the meat, that is Brown Sugar-glazed Applewood Smoked Bacon on the back of the plate.  I liked the flavor of the meat but did find it to be pretty fatty.  Not that I’m one to complain about a fatty piece of bacon.  That was just a heads up!  The sausage was fine.

The other highlight of the meal was the Fried Chicken and Corn Muffins.  Both of these are the same as what is served at the Hoop-Dee-Doo Musical Revue (the restaurants share a kitchen) and both are delicious.  I imagine I would have thought more highly of this buffet if we hadn’t gone to that dinner show a few nights before.  I really stuffed myself with fried chicken that night so I only had a piece at the buffet.  That dish is certainly a highlight here. 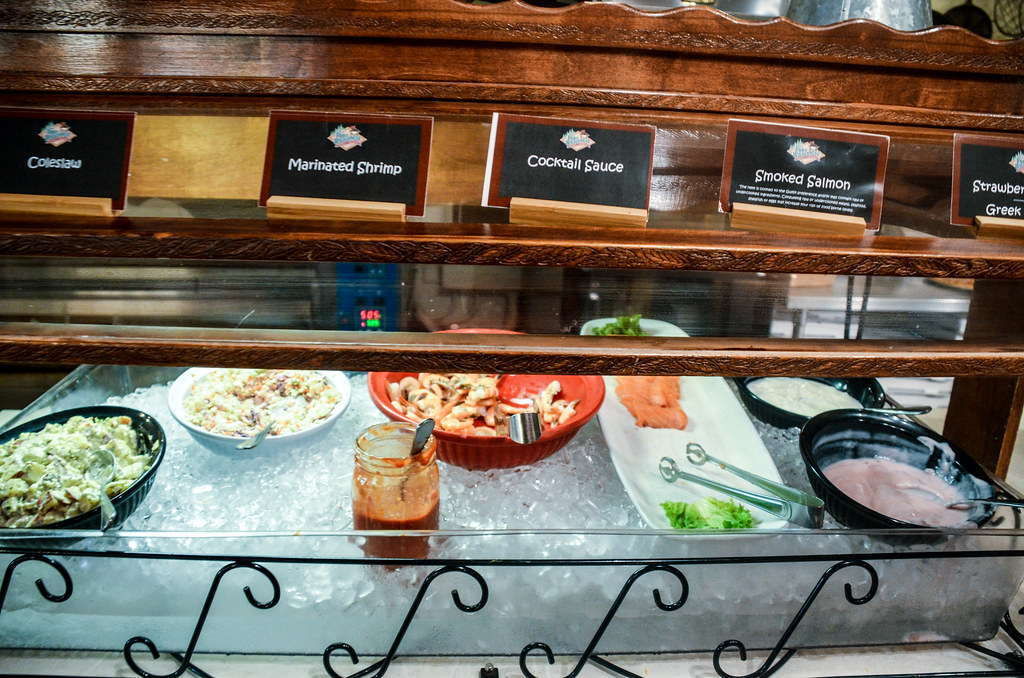 Along with the fried chicken, there were a couple of cold salads along with shrimp and smoked salmon.  I love shrimp but nothing here was anything out of the ordinary.  Again, nothing tasted bad but this was rather bland.

The desserts were pretty good.  I liked those little red velvet cakes you can see in the back of the picture above.  The cinnamon rolls were good but you can certainly find better around Disney World property. 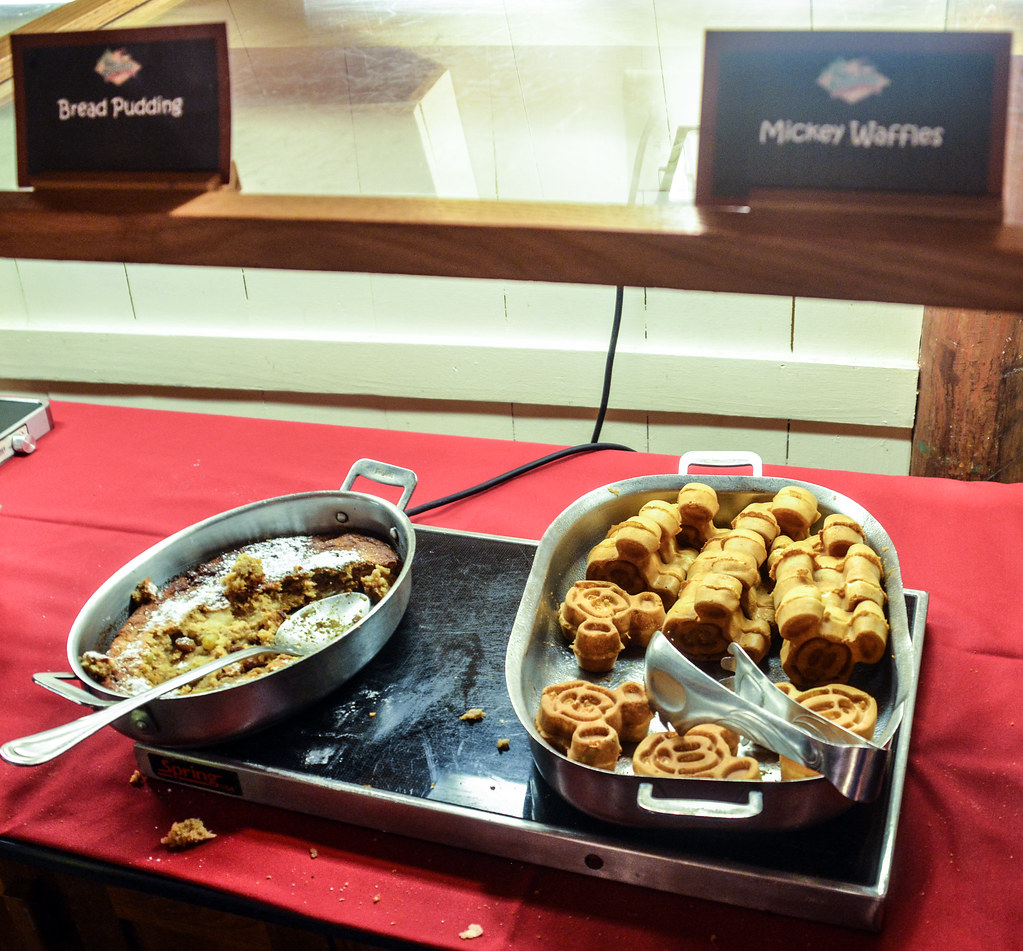 There are Mickey Waffles and people seem to like those.  The French Toast Bread Pudding was a little bit dry but still pretty tasty.  Plus, it has French Toast in the title so it counts as a breakfast food!

With my lukewarm (like most of the food we ate) review here, you probably think that I’m pretty down on this restaurant.  Instead I’m lukewarm.  Mainly I just wanted to use that phrase again.  The reason Trail’s End doesn’t get a hard pass from me is twofold.  One, I think I was in a bit of a weird food mood and think that we may have caught the buffet at the wrong time.  And two, the price is really good relative to all other Disney World buffets.  The cost for the brunch buffet was $23 per adult but we were able to add our 20% Annual Pass discount on top of that.  That makes for an $18 all you can eat meal per person, which is a good value in Disney standards. 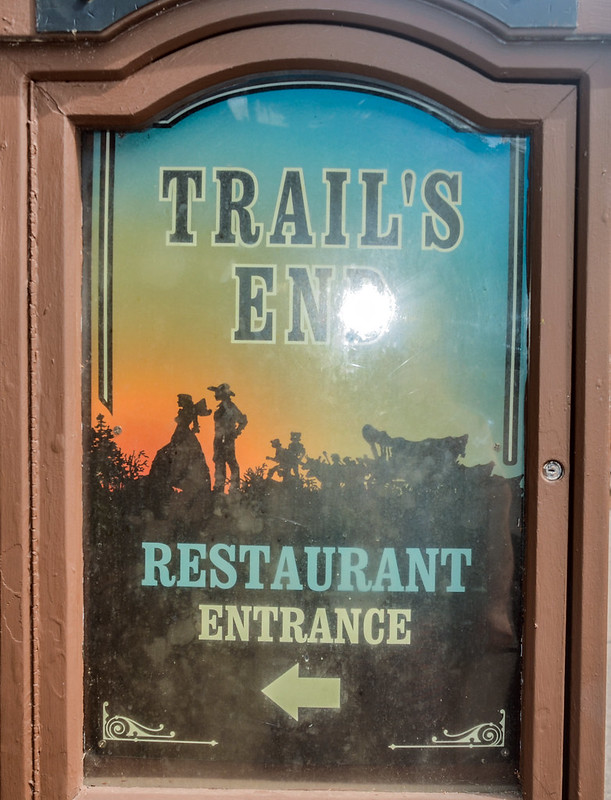 With that in mind, I wouldn’t say I recommend the restaurant but rather take it on a case-by-case basis.  If you really like comfort food or fried chicken then you probably will like this.  If you’re looking for something a little more exotic then pass.

Overall, we had an average experience at Trail’s End and probably won’t be going back anytime soon.  With that said, I can see why people really like it and it certainly has a place among Disney World’s vast array of restaurants.

Have you eaten at Trail’s End?  Do you have any questions about the restaurant?  Let us know in the comments!  If you enjoy what you’re reading here on Wandering in Disney, please subscribe to the blog and like our social media pages.  You can do both of those things on the right side of this page.  Thank you for reading, we really appreciate it!