While Disney Parks are magical at any time of the day, night-time there takes on a more whimsical feeling.  While many attractions have a similar feel in both day and nighttime, namely the indoor rides, some rides are different and more enjoyable at night.  Around the time this blog started we ranked the top ten attractions to experience at night in Disneyland.  Almost three years later it’s time to move on to Walt Disney World and give you my top ten nighttime attractions there. 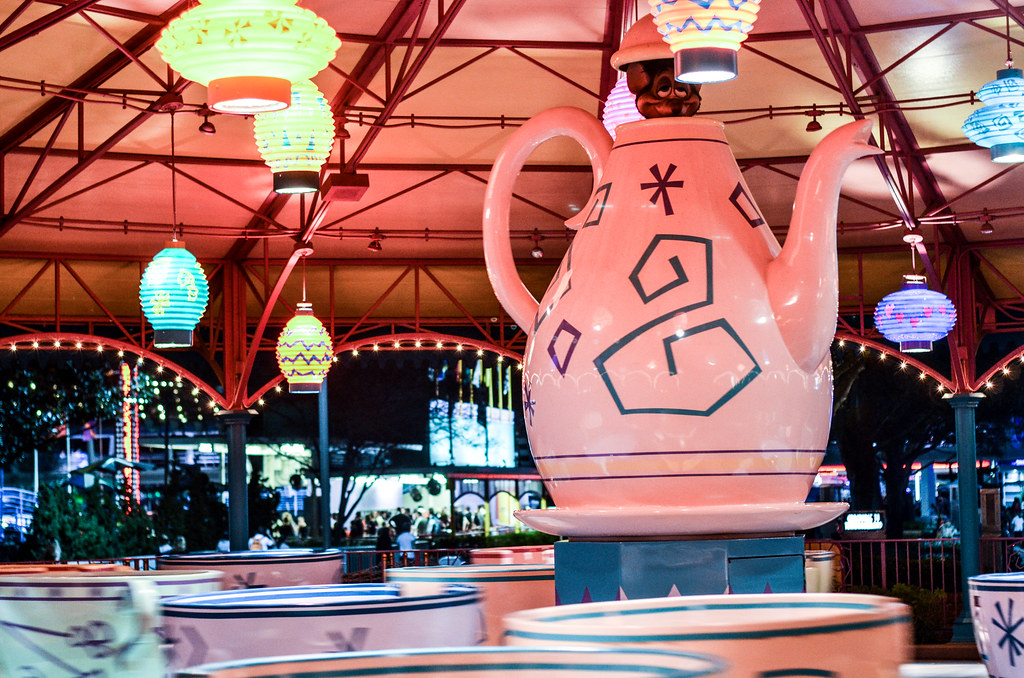 Test Track (Epcot) – Epcot is a wonderful place to visit at night.  That’s mainly thanks to World Showcase though.  With a lack of outdoor attractions, I threw Test Track in this list because I didn’t have any other Epcot rides that made the cut.  There are far more worthy picks than this that aren’t mentioned though.
Mad Tea Party (Magic Kingdom) – This mainly makes the list because my wife uses the attraction to wake herself up when it’s really late and she’s about to fall asleep.  It works well.  I will say that the area looks better at night.  When you’re spinning fast then it’s hard to notice that.  That’s why I don’t spin fast.
Haunted Mansion (Magic Kingdom) – The actual attraction doesn’t change at night.  Still, once the sun goes down and the mansion is illuminated there is a more mysterious and spooky feel to the attraction.  Not noticeable enough to make the top 10 but I still prefer night to daytime here.

10. Kilimanjaro Safaris (Animal Kingdom) – If you only have one chance to ride Kilimanjaro Safaris and it can be either day or night then do it during the day.  You are able to see the animals clearly and the attraction is a little longer and better overall.  With that out-of-the-way, the nighttime experience is pretty interesting.  The savannah portion of the safari is lit up in a brilliant color and is quite beautiful.  On top of that, several animals are more active in the evening including the hyenas and lions.  I’d recommend a ride on the safari right around sunset for optimal viewing but going in complete darkness is definitely an interesting experience. 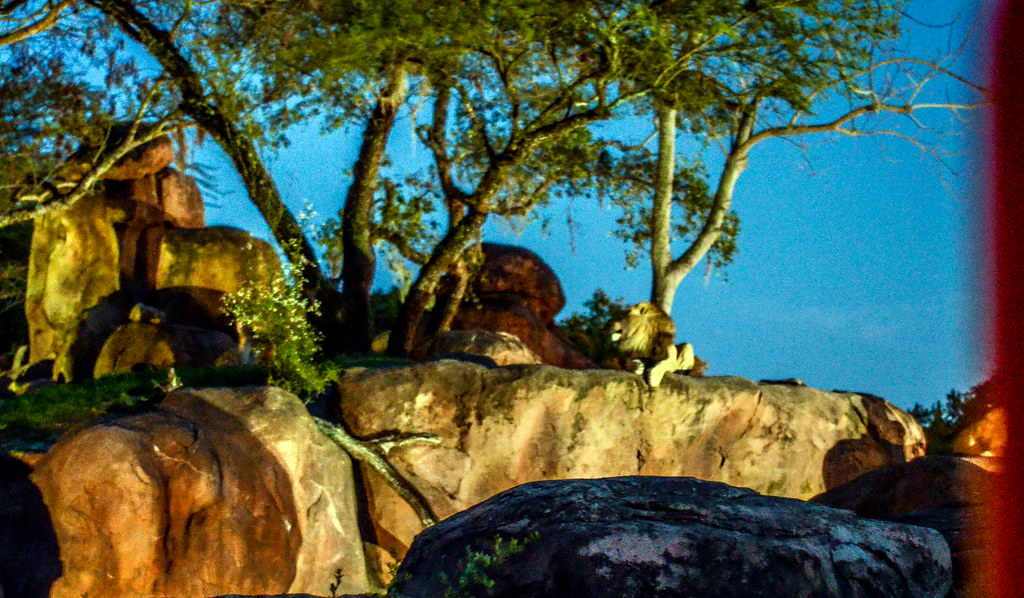 9. Seven Dwarfs Mine Train (Magic Kingdom) – Magic Kingdom’s newest roller coaster has some fun views at night but, sadly, is a little bit of undiscovered potential.  I’ve never liked the lighting on Seven Dwarfs Mine Train.  Being the center piece of New Fantasyland and having some good vantage points should lead to a really great experience.  Instead the vantage points are the highlight and the rest of the experience is mostly equal to the daytime.  While I’ve been somewhat of a negative nelly, this still landed 9th on this list out of over 50 attractions.

8. Astro Orbiter (Magic Kingdom) – If there’s a time to ride Astro Orbiter, it’s at night.  The views high above Tomorrowland are great and you can even sneak a peek of the Contemporary Resort all lit up.  Along with the views, the Astro Orbiter is a little more exciting for those crazy people who like thrills.  The Astro Orbiter freaks me out but it is far better at night. 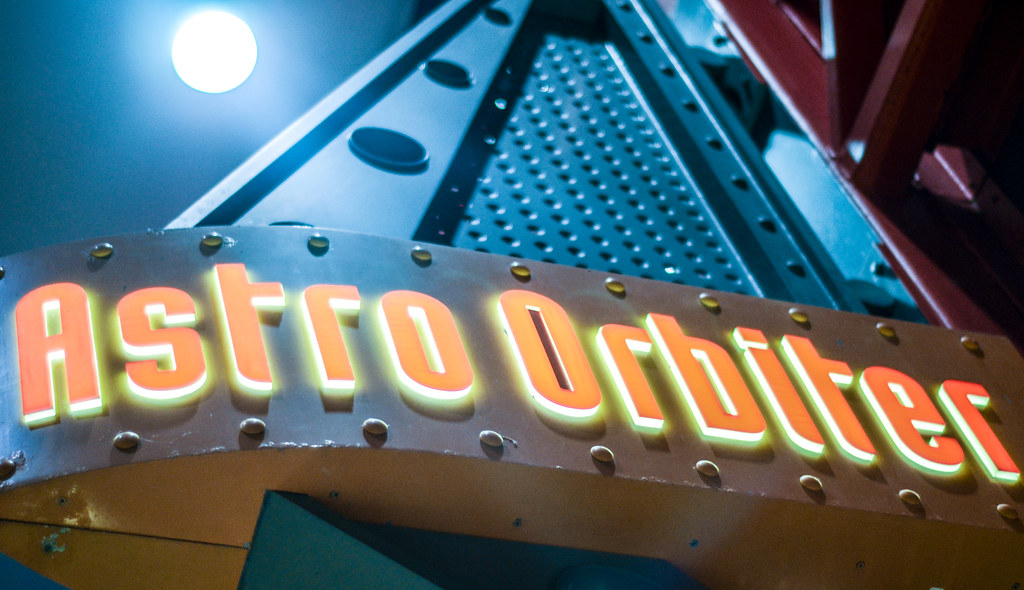 7. Tomorrowland Transit Authority PeopleMover – We’ll stick in Tomorrowland for number seven.  The TTA (as the cool kids say) is great any time of day but is especially nice at night.  First of all, there is hardly ever a line so you can take a few laps around the attraction if your feet are in need of a break.  More than that, you can see the castle lit up and Tomorrowland in all of its neon glory.  Beware though, if you get too comfortable after a long day then falling asleep is fairly easy.

6. Big Thunder Mountain Railroad (Magic Kingdom) – I don’t have scientific proof available to me but I’m 97% sure that roller coasters being more fun at night is factual.  Big Thunder Mountain Railroad is certainly no exception.  The turns are just a bit more startling and the speed somehow seems a little faster.  Big Thunder is similar to Seven Dwarfs Mine Train in the somewhat interesting vantage points.  Where it excels is the lit up track.  There is a perfect amount of lighting where you can see some of where you’re going but it still leaves some surprise.

5. Storybook Circus – The Barnstormer/Dumbo the Flying Elephant (Magic Kingdom)
The attractions in Storybook Circus aren’t necessarily the best.  Dumbo is a classic but is somewhat dull.  The Barnstormer is a kid roller coaster that is not worth much time.  But, at night this area can be fantastic as no one goes over here at all.  I’ve ridden the Barnstormer 5 times in a row at night because there was no one else in line.  Dumbo is usually a tiny bit busier but it offers some great views.  Both of these attractions look great at night, lit up in their best circus colors.  While neither are the best attractions in general, they are a blast at night. 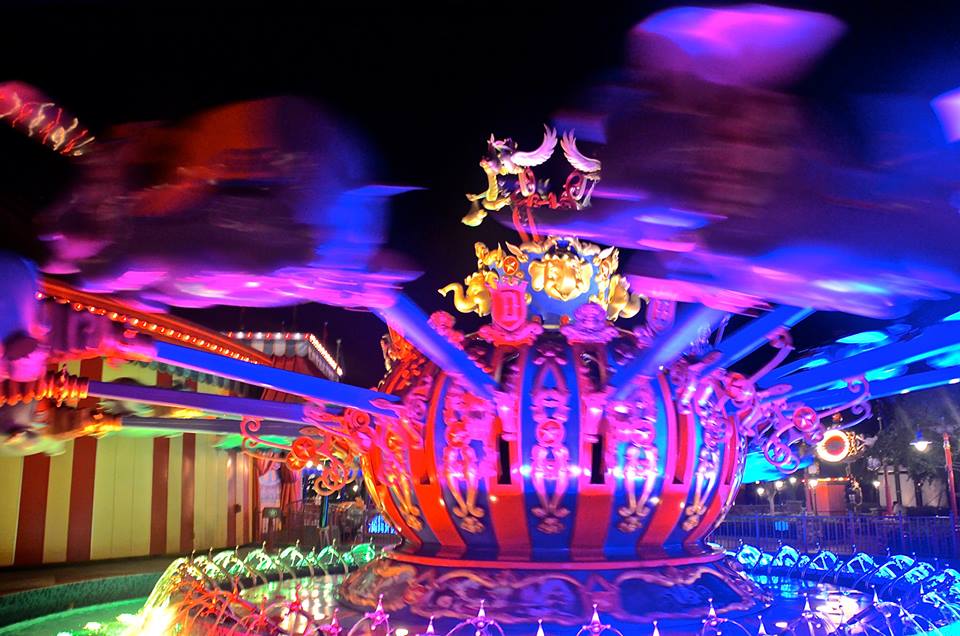 4. Jungle Cruise (Magic Kingdom) – The Jungle Cruise is fun anytime of day but once the sun sets the jokes can become a tiny bit more adult.  We aren’t talking crude jokes or anything but when you’re on a half-empty boat at midnight the skippers have a little more freedom to go off script.  This makes the whole experience more memorable and a slightly more personal, especially if you get the right skipper.

3. The Twilight Zone Tower of Terror (Hollywood Studios) – These next two are probably the most controversial on my list.  The Tower of Terror is an indoor ride that thrills guests with glimpses of outside.  Those glimpses are from 13 stories up so obviously they offer some dramatic views of, not just Hollywood Studios but, the entire resort.  This is especially stunning at night when you can see lights all across Walt Disney World.  The Tower of Terror also benefits from the “more spooky at night” reasoning.  The building looks more daunting with the lights on it and the dark sky behind it.  This is a great attraction anytime of day but is especially impressive at night. 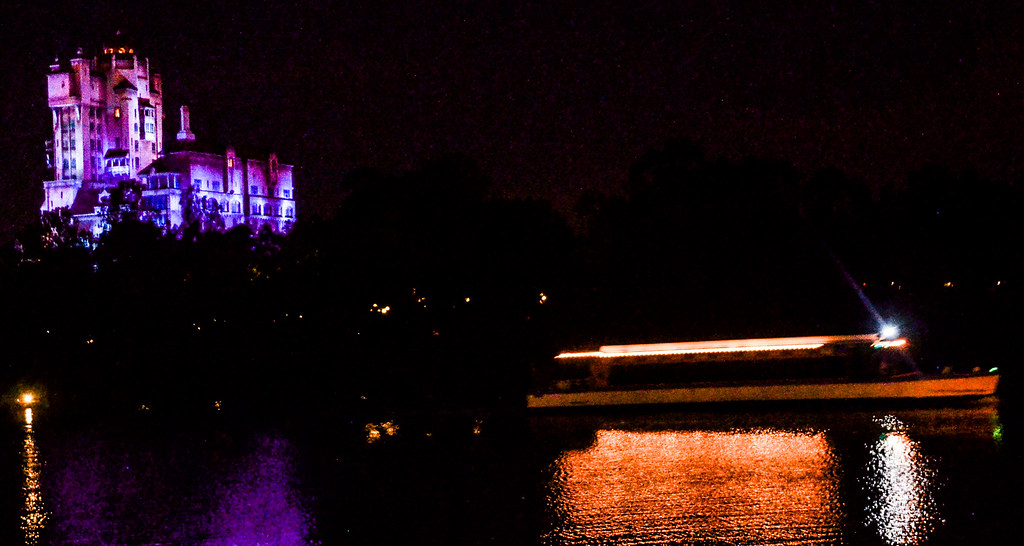 2. Splash Mountain (Magic Kingdom) – Much like Hollywood Studios, Splash Mountain is here because of the view it offers.  The attraction is largely indoors but there are a few nice moments outside that offer amazing views.  These different views are headlined by the view right before the drop.  This is one of the top views in all of Disney World, not just on rides.  Looking over Frontierland, out on to the river with the castle in the background is jaw-dropping, especially when they are all lit up.  The high speeds also feel a little faster in the dark.

1. Expedition Everest (Animal Kingdom) – Our Magic Kingdom heavy list is finished off by Animal Kingdom’s best roller coaster.  With Animal Kingdom now being open later, Everest is available to ride once the sun sets.  The experience is absolutely heightened by the darkness.  The surprises, even if you’ve ridden Everest before, feel new and thrilling.  Because it’s dark outside, it’s easier to see inside of the mountain which makes the climax of the ride even more exciting.  The first time I went on Expedition Everest at night I was completely blown away by how much I loved the attraction at night.  The whole experience was more enjoyable.

What are your favorite Walt Disney World attractions to ride at night?  Let me know in the comments.  If you enjoy what you’re reading here on Wandering in Disney please like our social media pages and subscribe to the blog.  You can do both of those things on the right side of this page.  Thank you for reading!