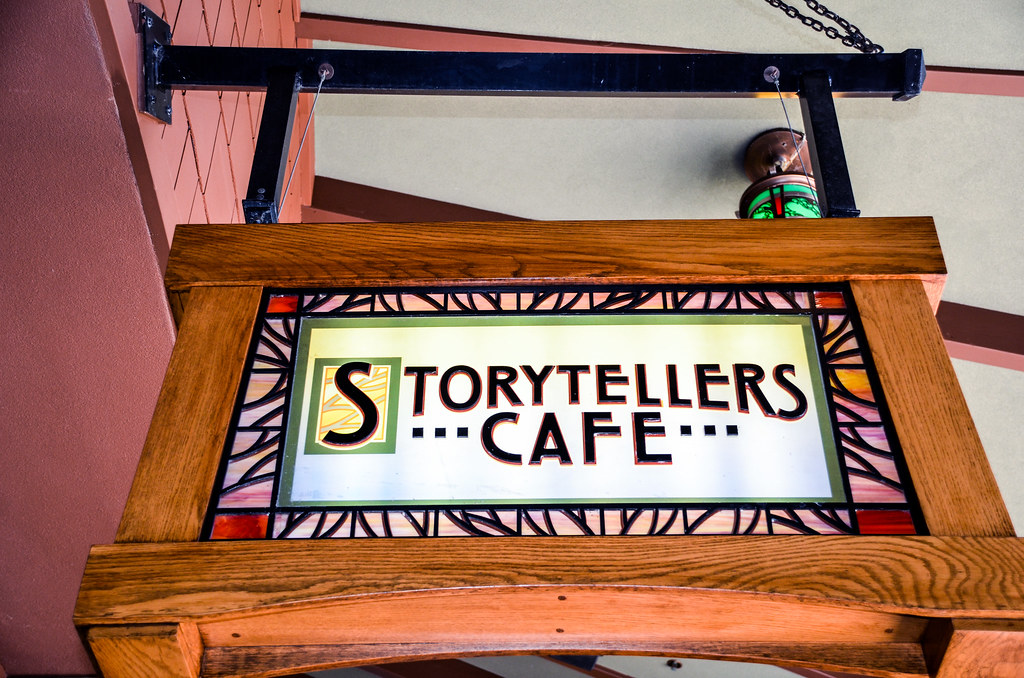 After spending the morning in Disney California Adventure, we strolled over to the Grand Californian exit of the park and walked right to Storytellers Cafe.  The inside of the restaurant fits the outside, both having a relaxed vibe.  The pool area to the Grand Californian is right outside and is very beautiful, fitting the national park theme of DCA’s Grizzly Peak.  Storytellers Cafe celebrates farming and the fresh food that California is known to grow.  The lighting was bright and the theme is not over the top but still well done.  I don’t think the environment was anything special but it was certainly nice enough.  I would describe the environment of Storytellers Cafe as a step below Napa Rose, if you’ve ever been there. 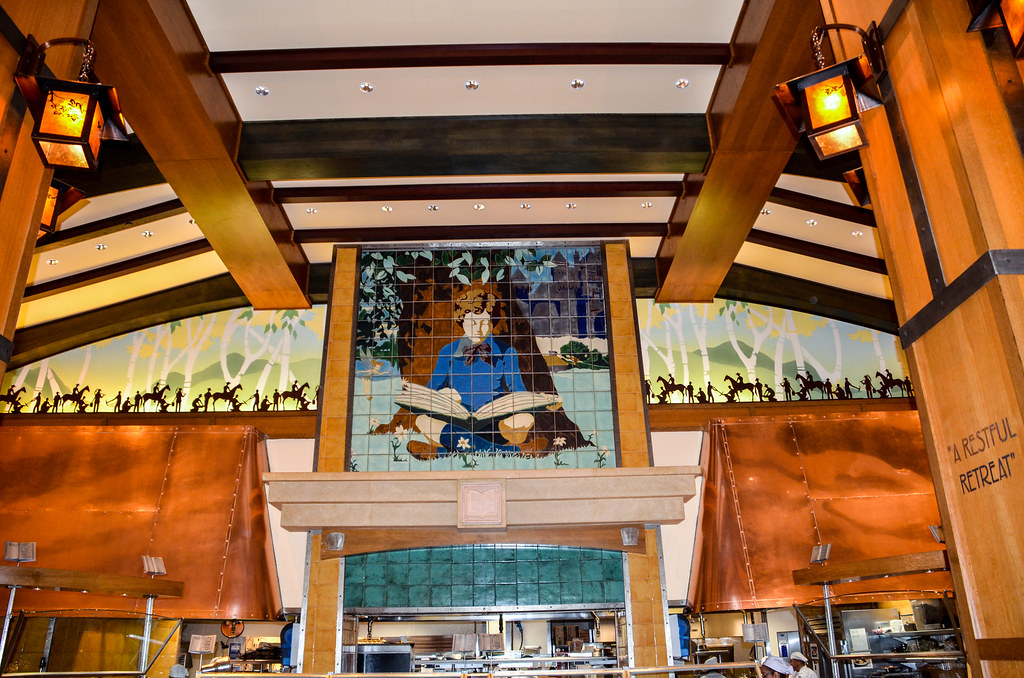 We went for lunch at about 1 PM on a hot, summer afternoon but the restaurant was empty.  It was a weekday but I’m guessing that this restaurant hardly ever reaches capacity for lunch.  Eating at a hotel’s table-service restaurant is generally a good alternative to eating in the park as the food is usually as good (if not better) and the restaurant will be less crowded.  That was certainly the case here. 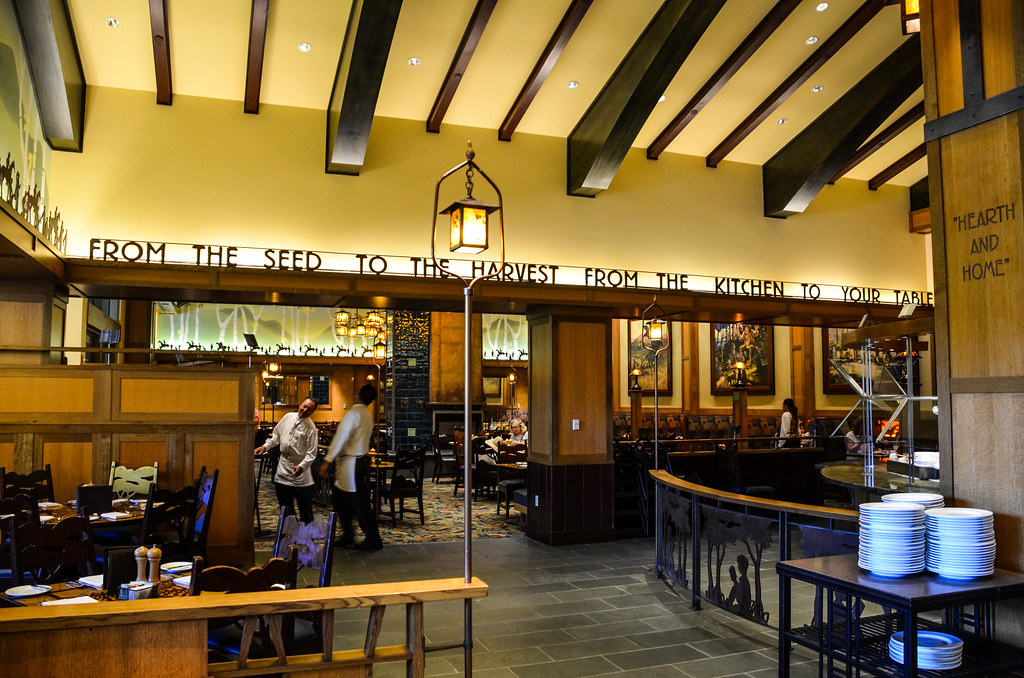 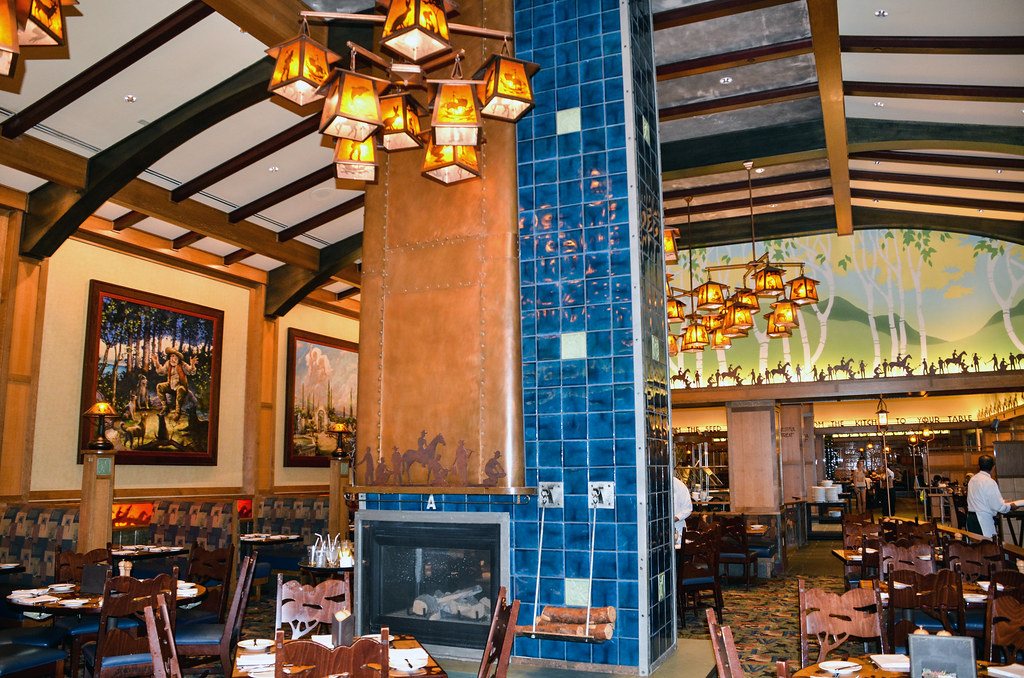 We were seated and checked out the menu.  The choices aren’t all that adventurous but they are fairly diverse.  While the majority of the choices were salads or sandwiches, there was also steak, salmon and pasta.  While nothing jumped out at me on the menu, there were plenty of solid options. 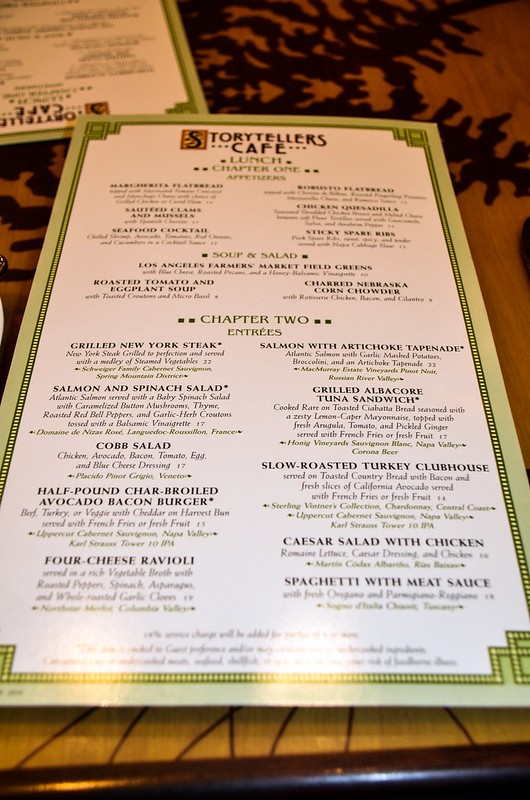 I ended up choosing the Grilled Albacore Tuna Sandwich.  Melissa went with the Salmon with Artichoke Tapenade.  But before we get to those, we ordered the Sticky Spare Ribs appetizer.  That came out at the same time as our complimentary bread service. 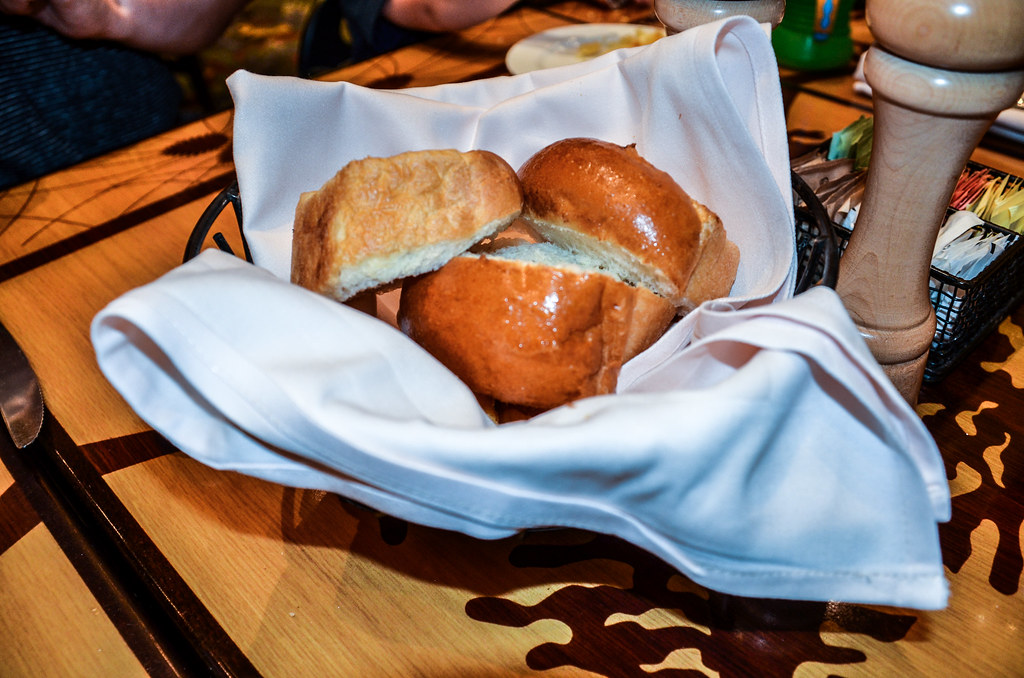 As far as I’m concerned the Sticky Spare Ribs stole the show.  The ribs were tender and fell of the bone.  The sauce had just the right amount of sweetness and also had a bit of a kick (not enough that it should scare you off).  This was easily my favorite item I tasted here and that’s only partially because of my carnivore tendencies.  These were a hit around the table and might have been the most unique item on the menu.

The bread service was good as well, with cornbread muffins and warm bread.  My wife, the bread expert in the family, really enjoyed the cornbread.  I agree and thought it tasted very fresh.  I also liked the variety.

Next came the entrees!  As I said, I went with the Grilled Tuna Albacore Sandwich.  I thought the sandwich was well prepared.  To be honest, I don’t know much about tuna as I haven’t had much of it.  The tuna in this sandwich was delicious but a little uneven.  Some bites were very flavorful and perfectly tender.  Others were somewhat bland and didn’t seem perfectly cooked.  For the most part, I really enjoyed the sandwich.  The tomato and arugula complimented the tuna, as did the lemon mayonnaise although there could have been more of that on the bread.  I enjoyed the sandwich but am not sure if I’d order it again. 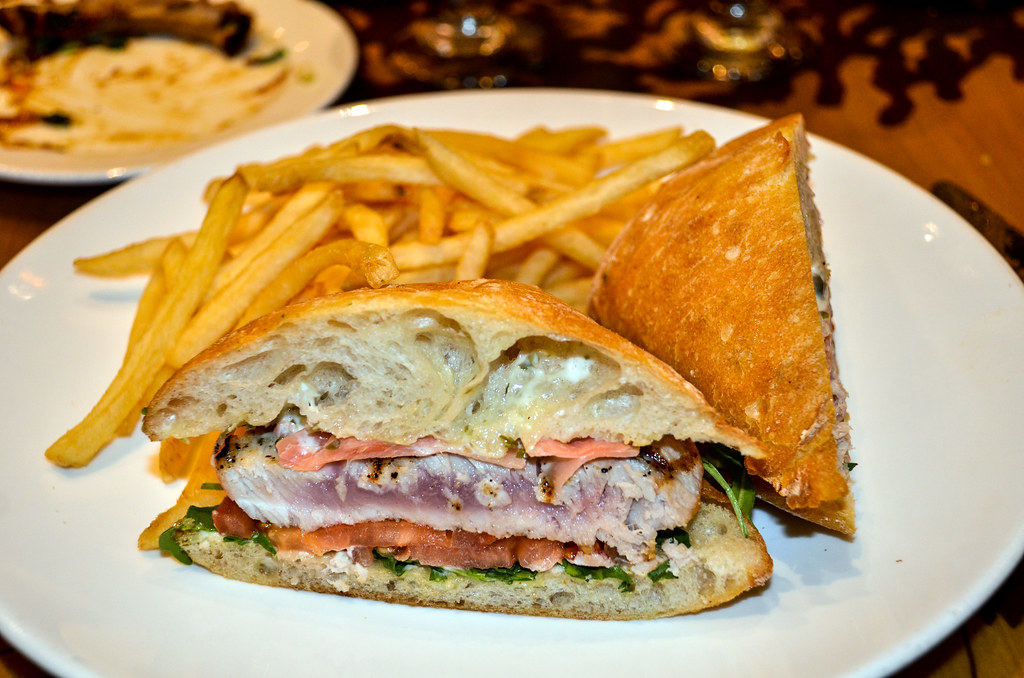 Melissa ordered the salmon and we both thought that was the superior dish.  I don’t like artichokes but the sauce on it was a great compliment to the juicy salmon.  I loved the salmon and thought it was cooked to perfection.  It had a nice, simple seasoning on it.  The broccoli and mashed potatoes that came with it were a nice compliment to the dish but nothing more.  I would gladly go back to get the salmon, as I thought it was delicious. 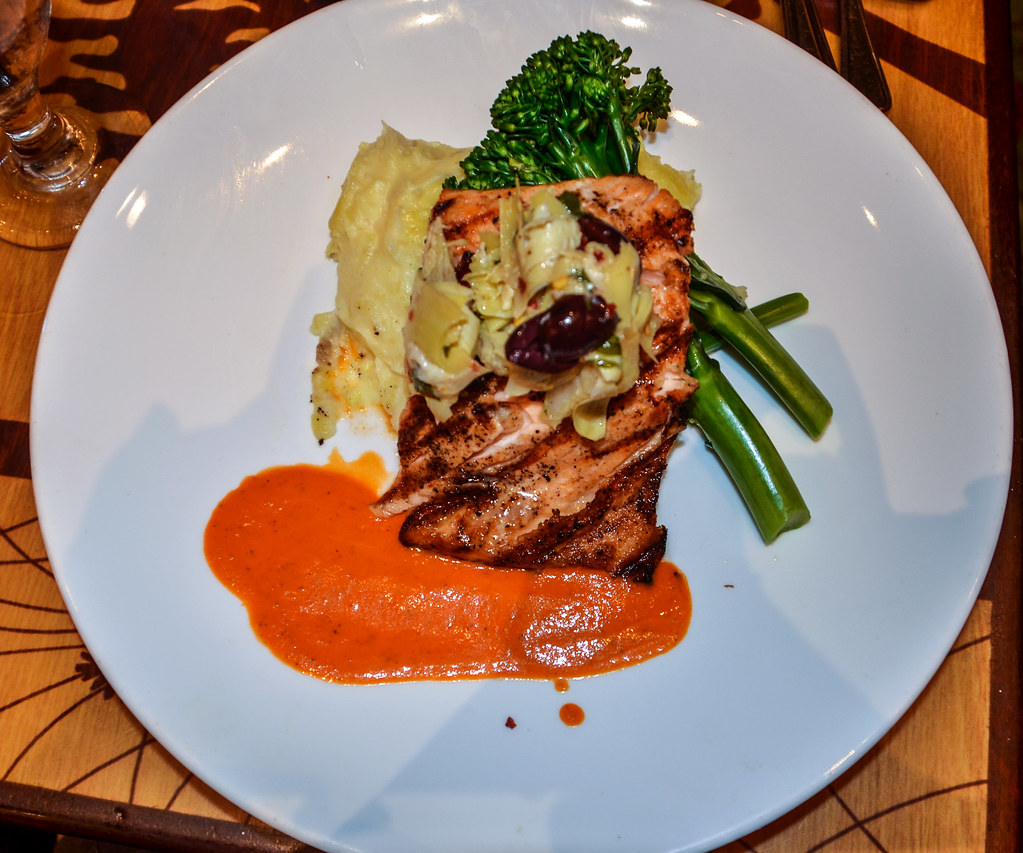 The rest of the table seemed to enjoy their entrees but no one left raving about how they couldn’t wait to come back.  As I said, the Sticky Ribs were the highlight.  The entrees were good but not spectacular.  The entrees matched the theme of the restaurant, good but somewhat forgettable.  While Storytellers Cafe provided an extremely pleasant meal, it doesn’t rank near the top of my Disneyland dining experiences.