Andrew, Cassie, Leslie, and Melissa H. got together and chatted on a few Disney topics.  Here is most of what they talked about.  I apologize for any grammatical errors, as the it’s slightly harder to edit this format than a regular post.

Leslie- How does everyone feel about Star Wars weekend not being a thing anymore?

Andrew – I don’t think it’s a big deal because every weekend will be Star Wars weekend now at Hollywood Studios. As long as they keep bringing in actors to meet guests and occasionally speaking then I’ll be fine with it.  I also wouldn’t be surprised if they brought it back after all the construction is done, in some form or another.
You experienced it more recently than I have Leslie, how do you feel about it?

Leslie – I loved Star Wars Weekend, as such I’m looking forward to a permanent Star Wars Weekend. I didn’t take time to meet actors because it was always packed and I had no time (minus the spontaneous James Arnold Taylor meeting I had) but if they continue to schedule actors that would be great. I know sometime recently Ashley Eckstien was supposed to be back but it was strictly for her clothing line, not for her role as Ashoka. To me the character meet and greets made the experience, and the stage shows. I think both of those will be incorporated to the new land. As well as potentially a fireworks show.
Plus new rides. New Star Wars rides. So cool.

Cassie – Truth be told, I am not the biggest Star Wars fan in general. I am looking forward to the Star Wars Land, but I don’t have much of an opinion otherwise about anything Star Wars related. (And I know it isn’t Disney related, but talk to me when Hollywood Harry Potter World opens in the spring…I will have a lot to say about THAT).

Andrew – The Star Wars fireworks show is confirmed. Super excited for that!
How much of your Disney time will Universal Studios take, now that it’s becoming an interesting option?

Cassie – I will probably have to quit my job seeing as I will be attending Hogwarts full-time….

Leslie – I unfortunately did not spend anytime at Universal this year (a sin I know but no car) however Universal in California is striving to gain a draw and it definitely will with Harry Potter.

Andrew – Universal is way more interesting now. I do wish that the Harry Potter in Hollywood would be way different from Orlando because I feel like I experienced it already.

Cassie – But in all honesty, my annual pass is up in February and I will probably be postponing renewing for a little while. I am hoping to use it as much as possible the next few months, but come spring, HP world will probably have my full attention. Also, Universal Studios is about 5 minutes from my house and Disneyland is an hour. Sorry Disney, I STILL LOVE YOU

Melissa H – This is kind of back tracking to the Star Wars thing, but what do you guys think will become of a Tomorrowland in Disneyland once Star Wars is complete? I can’t imagine Star Tours would stay there…

Leslie – It’s the same question I have for Star Tours in Hollywood Studios. It makes no sense to keep it where it is in its layout.

Cassie – I feel like maybe they will keep Star Tours for the nostalgic purpose?

Andrew – I think a full reboot of Tomorrowland is in order. Space Mountain isn’t going anywhere but everything else is on the table. While Tomorrowland the movie flopped I thought the idea behind it was great. They need to make Tomorrowland futuristic again, with new technology. The nostalgic 80’s feel to Tomorrowland should be on its way out as it’s served it’s time and now feels stale.

Melissa H. – I don’t necessarily think they would get rid of it, but it seems like it would fit better in Star Wars Land. I am with you Andrew – it feels cheesy and outdated
Tomorrowland is cheesy

Leslie – I really want a steampunk Tomorrowland. Like Discoveryland in Tokyo Disney. Something that doesn’t age.

Andrew – In Disney World, I think Star Tours will stay put. Judging by the permits filed that is where the majority of the work for the new Star Wars Land will be. Of course, you might know something I don’t.

Melissa H. – That would be cool Leslie!

Andrew – I completely agree with Leslie.
In fact, just copy a bunch of things from Tokyo DisneySea and I’d be happy.
I really hope they’d move Star Tours to the Star Wars Land in Disneyland. It makes way more sense to do that. Same thing with Buzz Lightyear and moving that to Toy Story Land in DHS.

Leslie – I just want 20,000 leagues back…and really the only thing I know is that the new Star Wars store is over where the drawing academy was.

Melissa H. – It just seems like they are going to have to do something with Tomorrowland… Otherwise it’s going to be a real dead-end in the park. Whether that’s completely re-theming it and turning it into a completely different land, or just updating it I don’t know.

Andrew – I don’t think that store will be permanent, Leslie. I’m guessing they are trying to put as much stuff in the places that won’t be under construction as possible.

Leslie – Maybe, I know very little about it other than they have it there and people are opening the store there. No clue what it looks like inside at all. And yeah Tomorrowland needs some sort of serious help.

Andrew – It’s a good question about Tomorrowland. I went over there (Disneyland) to take photos one night as the park was closing and was put off by the lack of lights and energy. There was nothing about the land that made me want to stay. It wasn’t bright and optimistic but instead dull.
Still better than ToonTown!

Melissa H. – I totally agree Andrew. It would kill me a little inside to see it completely go (just because of the fact that it was an original) but it just feels so terrible over there now…

Andrew – That’s it exactly. But it would be so hard to keep it updated. I understand the dilemma but doing nothing is definitely not the solution.

Leslie – If we made Tomorrowland into Star Wars land…

Melissa H. – Leslie that’s exactly what I’ve said to people! I just don’t think it has enough space for what they are planning. But it would make sense

Andrew – Too late for that idea, Leslie! Instead it’s goodbye to my beloved goats…
I think they found the best possible spots for Star Wars Land, honestly. Should help with the crowds in both parks a ton.

Cassie – Agreed. That area is a ghost land…or should I say GOAT land

Andrew – Do any of the add-ons or hard ticket events excite you (like tours, breakfast in the Jungle Cruise, the new Club Villain dinner)? And would you ever pay for them?

Melissa H. – I would be willing to pay ANYTHING to do the Jungle Cruise breakfast. Seriously – that’s like my dream come true.

Melissa H – I would do it. If it wasn’t already completely booked.

Leslie – Poor goats. The tours have always interested me, but being constantly busy had been hard. I’m up for anything Jungle Cruise. The Club Villains sounds awesome too. Also I don’t think it’s fair to ask me if I would pay for it cause I probably would. I’ve always been about the Disney experience over money.

Cassie – I too would love to dine along the Jungle Cruise. I think they could incorporate some exotic flavors.

Andrew – Leslie and Cassie have experienced the Halloween Parties, right? You both thought it was worth the cost?

Leslie – It was just so busy…and I enjoyed Christmas more. Probably because I love Christmas more and I was more prepared for it. Plus, fewer people.

Andrew – Was the Christmas party worth it? Not to steal any thunder from your upcoming review.

Cassie – I’d say yes and no too. Yes, because of all the new things to experience. No, because it is usually too busy to experience it all. That was kind of an oxymoron. Sorry.

Leslie – It’s again a yes and no answer. I liked it better than the Halloween party overall, but that’s probably because I love Christmas more than the average person.

Andrew – Makes sense. I feel like that’s how most reviews of the hard ticket events are. It was interesting but there wasn’t enough time or space to enjoy it all.
None of you have taken an actual tour, right?

Leslie – Pretty much. That’s the short version. Nope no tours have been taken unfortunately.

Andrew – I’d love to take one at some point. But I never want to give up hours of my vacation. 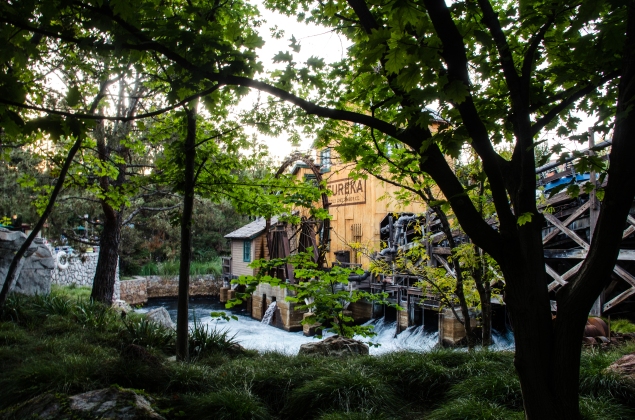 That’s it for this chat.  If you have something you’d like to add to any of the topics we addressed, please put them in the comments!  Thank you for reading and have a great day!  Also, if you have any ideas on how to format these chats better, we’re all (Mickey) ears.