Trip Report Saturday was a wise and noble notion but it went back to the grave just as soon as it was revived.  Someday, and someday soon, it will rise again but for this week the trip report comes on a Tuesday.  If you missed the first installment, click here.

After riding a few attractions with short lines in Fantasyland, Melissa and I braved a place we hadn’t been in years – Mickey’s Toontown.  I’ve never thought highly of Toontown.  Maybe because I didn’t love theme parks until I was a bit older, I never grew a nostalgic affection for the land.  We had completely skipped Toontown on our last trip to Disneyland so we thought we’d walk around for a while and see what we were missing. 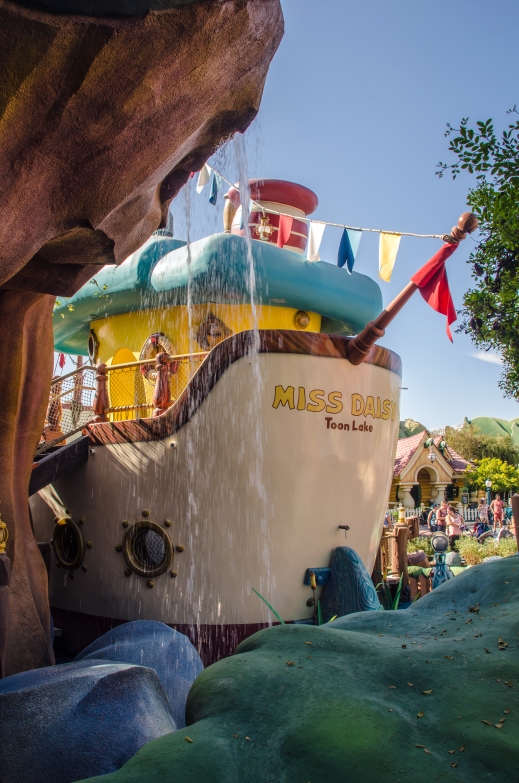 We walked through Mickey’s house and met him at the end, climbed through a treehouse, rode a roller coaster, walked around and through a boat, saw a few nice fountains, snapped some photos, interacted with some gags, and tried to experience just about everything Toontown offered.  And to be honest, none of what I listed above left an impression on me.  I do see that kids could have fun here but they also have fun in most other areas of the park.

The thing is, Toontown has a well-executed theme.  The design looks cartoonish and I can’t picture it looking much better than it did.  The problem, in my opinion, lies within the idea of Toontown.  Like DinoLand USA in Animal Kingdom, the theme is carried out well but the idea behind the theme is not a place where I want to spend a large amount of time.  The area doesn’t have an inviting atmosphere and once I was done with the attractions and seeing everything, I didn’t have much interest in sitting and taking in the sights and sounds.  I want to do that in every other area in Disneyland, even Tomorrowland which has many flaws.  All of this is why I’m just a little sad that Star Wars Land will be replacing Big Thunder Ranch instead of Toontown.  I find Big Thunder Ranch to be more unique and charming than what is staying.  I understand why they went the route they did.  I’m not annoyed or mad about it, just a little bit sad.  I know many people out there like, or even love, Toontown and that’s great.  The land just isn’t for me and I think that eventually the area will be used for something else. 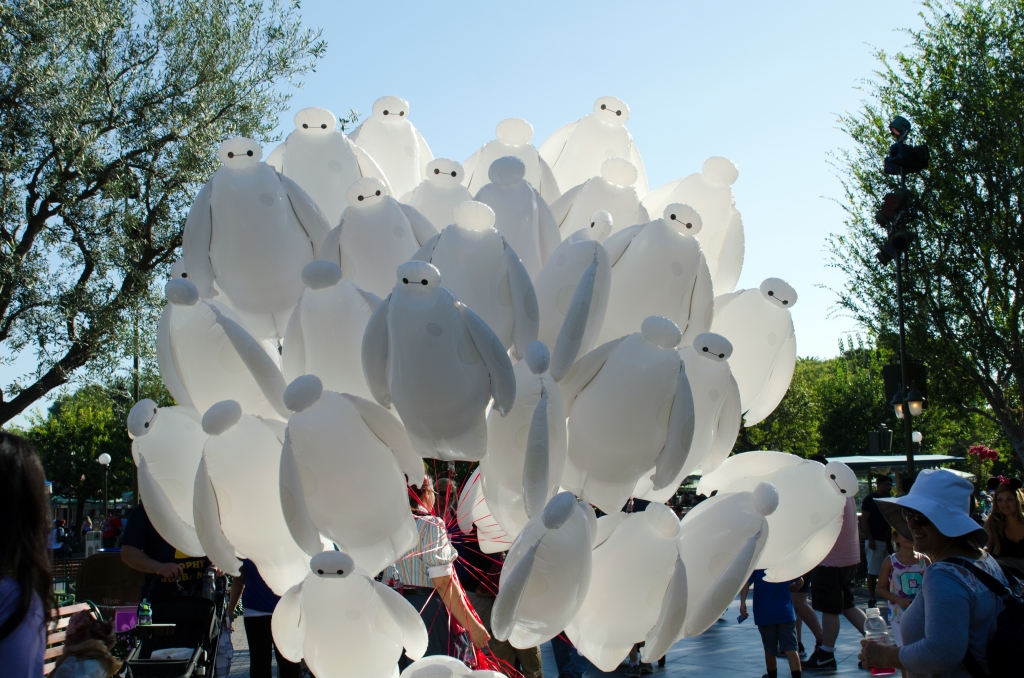 We made a quick trip back to Main Street and went to the flag retreat ceremony.  I haven’t decided if I will write a full post about the flag retreat yet but I really enjoyed myself.  This was an event that I’d wanted to attend for quite some time.  Everyday at 5 PM, they lower the flag on Main Street for the evening.  The Disneyland Band and Dapper Dans join to play a few songs and honor members and veterans of the military.  It’s a heartfelt ceremony that is touching to watch.  It lasts for about 20 minutes and I heartily recommend seeing it, if you haven’t already.

After the ceremony, we headed to our delicious fried chicken dinner at Plaza Inn.  I reviewed this meal a few weeks ago, you can read it here.  In short, I really enjoyed our dinner and Melissa thought it was decent.

We had gotten fairly tired by this point and had done most of the attractions on our check list so we slowed it down with a ride on the Mark Twain Riverboat. 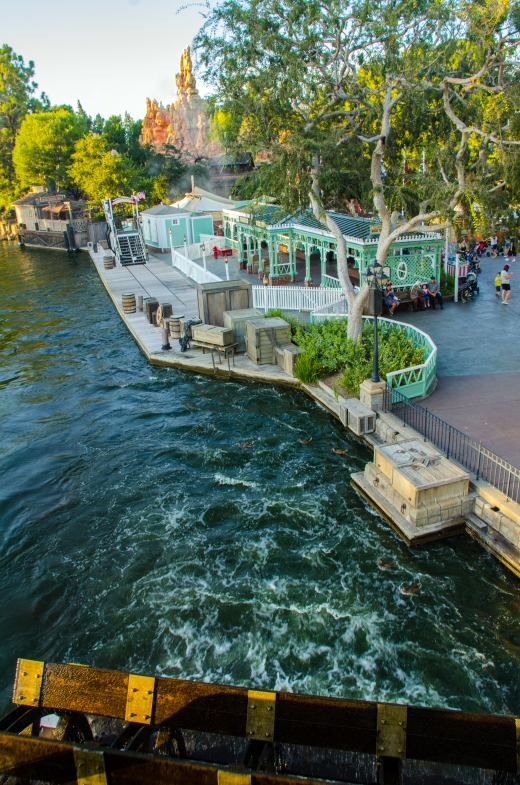 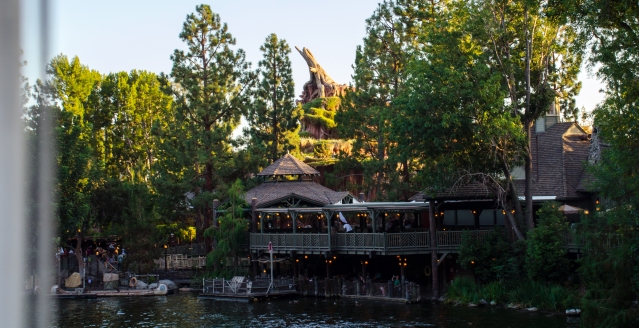 I’ve raved about the Mark Twain River Boat a few times before.  This time Melissa and I got a spot on the top deck of the boat.  The top deck offers the most views of the surroundings, even if it doesn’t have as much character as the first or second deck.  I walked around and took pictures as Melissa rested and took in the sights from a bench.

The ride around the river is really beautiful and there is a ton to look at.  If you go at the wrong time this boat ride could be miserably hot so I recommend taking a ride in the early evening, on one of the last trips the boat offers.  I’ll eventually do a photo tour post of the Mark Twain River Boat.  For now, here’s a few more photos.

We spent another hour or two wandering around Frontierland and New Orleans Square.  The parks were so empty that it was easy to ride anything we wanted, even in the early evening.  Another trip on Big Thunder and through the Caribbean were in order, as well as watching the sun set over Splash Mountain. 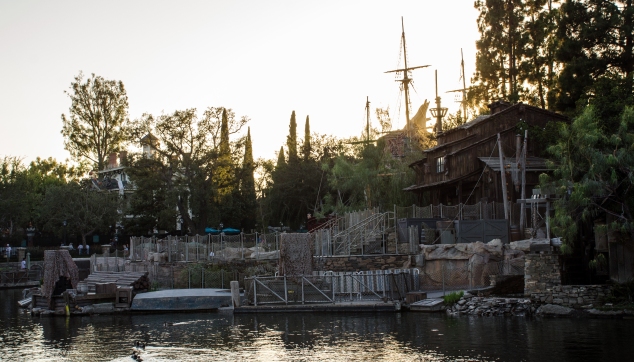 Melissa and I were very excited for the new 60th anniversary and decided to find our place along Main Street about 45 minutes before Paint the Night began.  Many people had already lined up in this area, so we didn’t have as good of viewing area as we would a few nights later.

The first time watching these shows was nothing short of incredible.  I took more pictures the second time, as I simply watched a good share of the parade and fireworks the first time.  The scale of the parade really blew me away at first, as Cassie and I tried to explain with our review.  The fireworks were incredible too, although I enjoyed the second time I saw it more as I had a better spot to see everything around me.  All in all, it was an unforgettable night being able to see both of these shows for the first time. 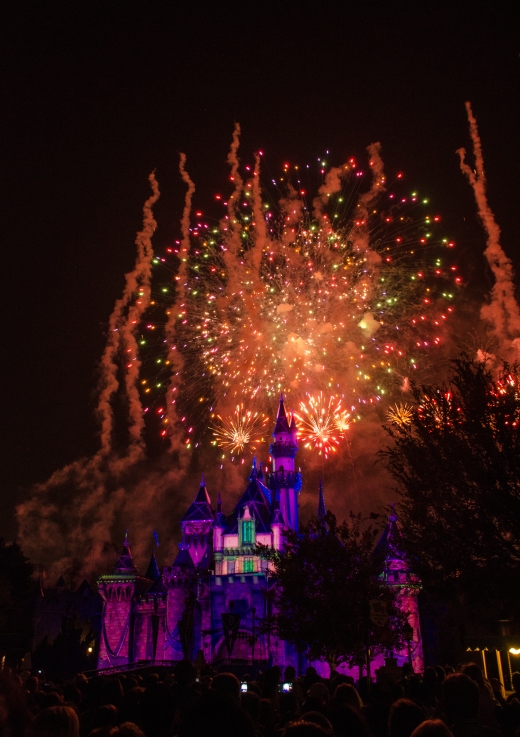 The park closed shortly after the fireworks ended.  I typically bring my tripod to shoot some night photos after the park closes, but I forgot a piece of the tripod at home so I wasn’t able to this night.

Melissa and I wandered through Tomorrowland.  I had hoped that Tomorrowland, after closing, would be warm and vibrant with the neon lights.  I was slightly underwhelmed.  The land was fairly dark and that made it feel as if there was a lot of empty space.  At its best, Tomorrowland should be full of energy, exploration and hopefulness; a sign of the beautiful future that is to come.  Right now it looks a little dim.  I do believe that it could be fixed fairly easily.  A new attraction would do wonders, as well as maybe a slightly different color theme.  On this night, the land seemed tired but with a few positive changes it could be Disney’s best land. 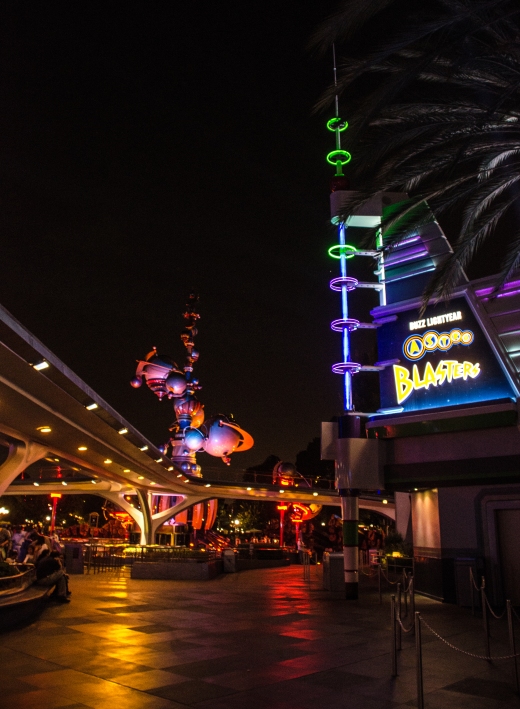 Our energy was waning and I was a little dejected about forgetting a piece of my tripod.  With that in mind, we made the 15-minute walk back to the Howard Johnson and headed to bed.

The next morning saw the park open at 10, but we took advantage of the Magic Morning on our ticket and went into Disneyland at 9.  Our plan of attack was to go to Peter Pan as soon as we got into the park.  Even with going right at gate opening, Peter Pan had a 45-minute line.  People were very eager to see the new enhancements that they added to the attraction, as it was easily the most popular attraction while we were there.  We put it off for another day and headed over to other Fantasyland attractions.

In my last few trips to Disneyland Alice in Wonderland had been closed.  I was happy to find it open and we promptly hopped on.  I’m late to the (tea) party, but I was really impressed by the upgrades they made to Alice.  Everything looked sharp.  After the upgrades, this attractions lands right on the fringe of my top-5 dark rides at Disneyland (which I consider to be one of Disneyland’s strong points).

It was nice to do a few attractions but I’m not sure the Magic Morning helps the park experience that much during the off-season.  Complaining about it would be fairly ridiculous, as they are opening up the park for an extra hour to select guests.  With that being said, Disneyland doesn’t open much up during the Magic Morning (Tomorrowland and Fantasyland) so there are pretty big crowds in select spots.  If you go into the morning just looking to get a few extra attractions in then the Magic Morning is great.  If you are looking to get in a bunch of E-ticket attractions, then you may be disappointed.  Of course, all of that depends on the time of year.  Either way, I was happy to head over to California Adventure after an hour in Disneyland, as it was significantly less crowded than Disneyland (meaning hardly anyone was there because Disneyland wasn’t THAT crowded).

We grabbed a FastPass for Radiator Springs Racers and hurried off to Flo’s since we had rented it out for breakfast.  Okay, we didn’t really rent it out but we were the only ones in there.  We really enjoyed having a relaxing breakfast in there and staring out over Radiator Springs.  I will have a review of our breakfast sometime soon but, in short, the food was good but not great.

This seems as good of a spot as any to stop this installment.  Part 3 will conclude our day at California Adventure and a take quick look at how we spent our day outside of the parks on the following day.

I’m always looking for feedback on trip reports.  Would you like more photos?  More detailed plans of what we did and why we did it?  More opinions on areas and attractions?  Please let us know in the comments and we will try to include that in future trip reports.  Thank you very much for reading and have a great day!