On our latest trip down to Disneyland, we stayed three nights in the Howard Johnson Anaheim Hotel and Water Playground.  Well, technically we didn’t stay in the Water Playground but that was part of the hotels official name so I had to call it that at least once.  The Howard Johnson, or HoJo as the cool kids say, is about a 15 minute walk to the gates of Disneyland.  The hotel is directly across the street from Disneyland, as it’s on Harbor Blvd. and near I-5.  I had heard many people rave about the Howard Johnson and I was eager to try the hotel out.

As I said, this particular HoJo is very well thought of, ranking number 6 on TripAdvisor’s list of all Anaheim hotels.  Much of that may come from the family friendly nature of the hotel.  The official title this place holds isn’t afraid to boast of their ‘Water Playground’ and rightfully so.  From what I can tell there isn’t much like it when talking about Disneyland Good Neighbor Hotels.

The layout of the hotel is family friendly, as well.  Instead of a standard motel that you are more likely to see on Harbor, the Howard Johnson has several building with rooms in them, making it a fairly large piece of property when all is said and done.  The walkways from building to building were well-kept and looked nice.  The whole section felt safe and, for a road with some run-down hotels on it, that in itself is an accomplishment.

With all of that being said, I’m still unsure of how I feel about the Howard Johnson.  Let’s jump into the details to break it down further! 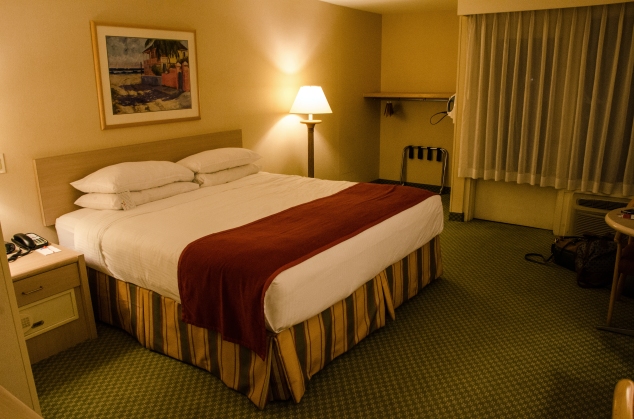 There are several different rooms available at the Howard Johnson.  As you can see, Melissa and I opted for the king bed room.  I also believe we ended up with a handicap accessible room.  I don’t know the reason we had this room, probably due to what they had available.

Our room was… Umm… Weird.  First, the good.  There was quite a bit of space in it, as there usually are with king bed hotel rooms.  I really liked our deck, which was pretty wide.  We were on the first floor so there wasn’t much to look at but that’s beside the point.  While I’m no design expert, I am a trust-worthy source when it comes to grading hotel art.  The art on these walls graded out to a B.  Being so close to I-5, I was a little worried that we’d hear traffic all through the night but I don’t remember that at all.  Last of all, and maybe most importantly, our bed was comfortable.  Not extremely soft but enough to sink down a little bit.  Neither of us had any trouble sleeping.

Now, for the bad.  The room was fairly ugly.  The walls were nice enough with the decent artwork and simplistic nature but everything else was not kind to the eye.  Of course, this is all a matter of taste but the green carpet wasn’t my favorite.  Mix it in with the different greens and the red on the bed and you’ve made for an ugly Christmas.  The room was kept clean by the staff (who were kind and helpful in all of our encounters) but the vague shades of color made the room feel dark and dirtier than it actually was.  We had a few problems with our TV, some of the channels would come in and out, but that was probably just a weird occurrence.

The room did have a nice little table and desk.  As I mentioned, the room had a TV that was a decent size and was mounted on the wall, which is nice.

Moving on to the bathroom… No, this is not a flattering picture but I thought it showed the weirdness of the bathroom.  There was a ton of room in the bathroom which is great, right?  I’m not so sure that’s the case here.  There was too much space for everything being so small.  Of course, a toilet is always about the same size (doing my best to stay away from any bathroom humor but you don’t know how hard this is).  Sinks, on the other hand, can vary in size and this one was extremely small.  The same goes with the shower/tub.  If the bathroom was a regular size then everything would fit in better but here it just made the room seem hollow.  That made the bathroom kind of off-putting.  I would chalk it up to me being weird, but Melissa disliked it even more than me so that’s why I included it in the review.  Again, we did seem to have a handicap accessible room so other bathrooms could be different. 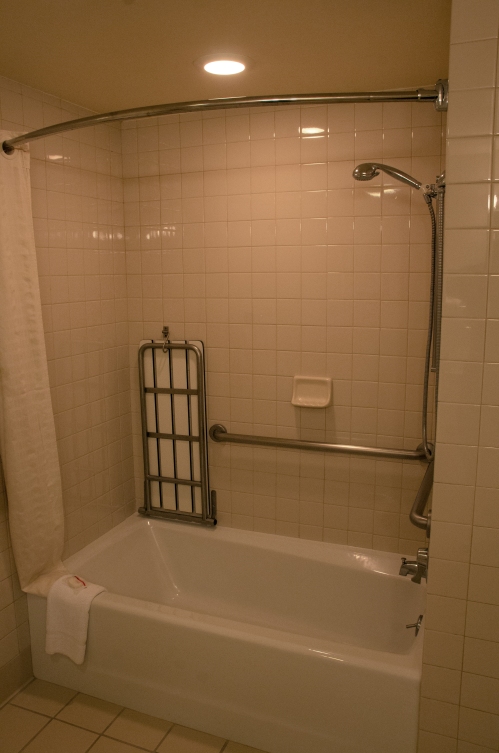 All in all, the room could have utilized space much better than they did.  Also, some different colors in the room would make it feel much less dated.

Moving on to the star of the show, the water playground.  This thing really was cool and I can see why families with kids under 11 or 12 would love this place.  I know I would have loved this when I was a kid. 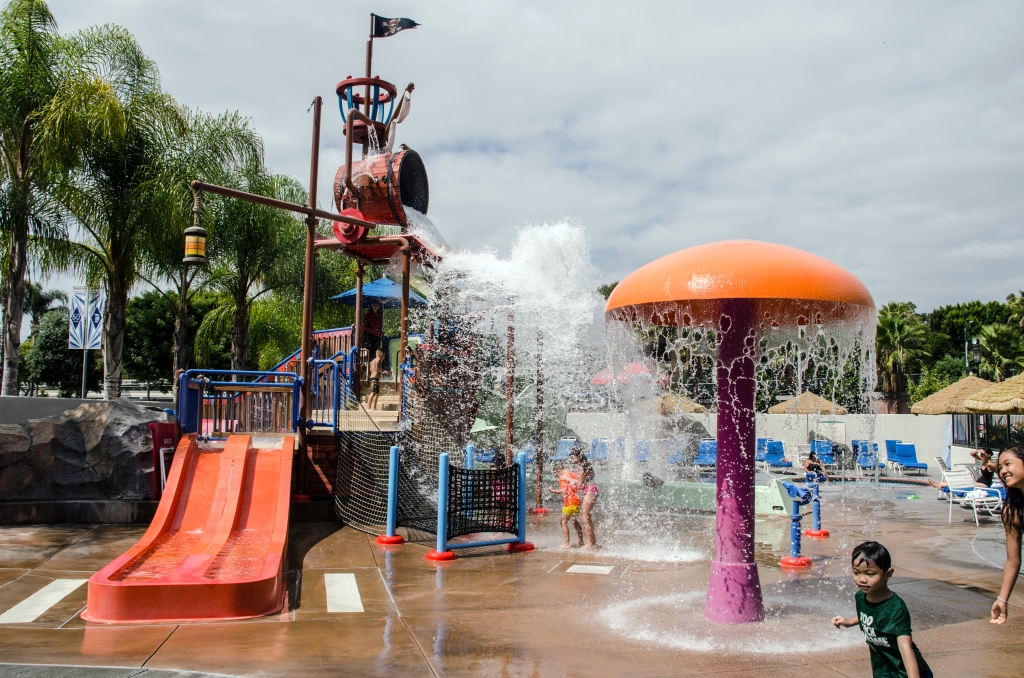 There’s a few slides, ropes to climb on, that weird mushroom thing and then that giant bucket of water dumps every couple of minutes.  There’s also a hot tub on the far end of this picture where parents could easily watch their kids play from.  The hot tub was fairly small (it could probably fit 4 or 5 comfortably).  If hot tubs aren’t your thing, there were plenty of chairs and umbrellas around to lounge in.

The other half of the water playground was a place for smaller children.  There’s a little splash area with Franklin the Turtle’s second cousin, Delanor (don’t look that up, you won’t find anything).  There’s also a wade pool, as you can see.  Over on the opposite side of the hotel property there was an actual pool, although it meant business.  There was no time for silly things like water playgrounds at this pool.

This pool was more your run-of-the-mill hotel pool, although cleaner than most.  Both ‘water areas’ (I don’t know what else to call them) were well-kept and looked nice.  Melissa and I spent a few minutes at each place.  I would have spent more at the water playground if I hadn’t felt like such a creep for being the only adult standing under a giant bucket of water that was about to get dumped on me.

Like I said, the water areas are best suited for pre-teens and younger.  I have a hard time seeing any teenager really enjoying the water playground and the pool is just your average pool.  As for adults without kids, the water playground is fun but you’ll get some looks from parents if you are there for more than 10 minutes.  I speak from experience.

The hotel also featured a game room with about 7 or 8 games in there.  Across the way from that was a gift shop that had a decent variety, from snacks to souvenirs.  Both of those were nice little accommodations but not something to pick this hotel for. 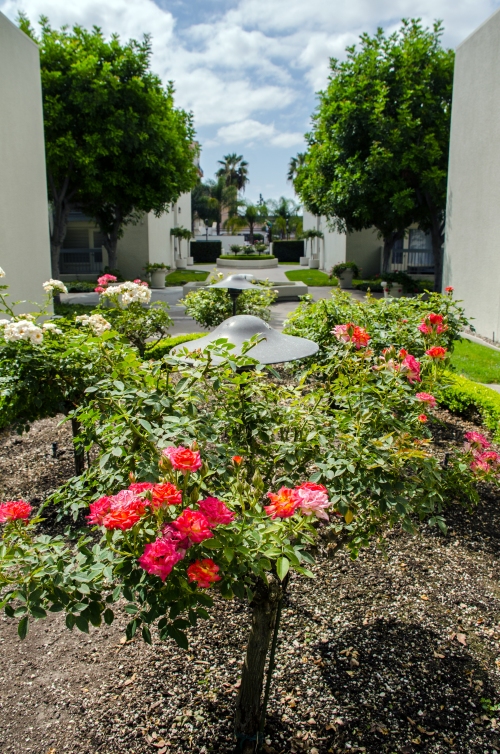 Nearby there were a few places to eat, namely Mimi’s Cafe and McDonald’s.  I’ve never eaten at Mimi’s.  I have eaten at McDonald’s, unfortunately.  Although McDonald’s is in a good spot to stop and grab some breakfast in the morning on the way to the park.

As far as other hotel amenities, there was no workout room.  There was free wifi and parking.  At least, I believe the parking was free as the website implies that it is (we didn’t have a car so I’m not sure).  There was a tax (and resort fee) of about 18% which is pretty steep.  I’m guessing that percentage is so high so then they can offer ‘free’ wifi and parking.

Before the tax and fees, the Howard Johnson offers rooms from about 140-180 a night.  There are plenty of discounts to be found though, with Howard Johnson being a well-known hotel chain.  Still, I think this price is just a little bit too high.  There are other hotels that are a bit cheaper per night with nicer rooms.  It all comes down to how much you value the water playground, which is definitely unique and great for kids.

Overall, I didn’t think this hotel lived up to the hype.  I understand why families would really like it.  The location was pretty good, the hotel felt safe and the water features were unique.  On the downside, the room felt dated and was somewhat ugly.  As I said, I think the hotel is slightly overpriced but could be worth it for families with kids who love the water.

Have you stayed at the Anaheim Howard Johnson?  What were your thoughts on it?  Let us know in the comments!  Thank you for reading!