Happy Father’s Day to every dad who’s reading this, specifically the dad’s of all our writers here on Wandering in Disney!

Every Sunday our writers get to together and answer a Disney-related question.  Leave your answer in the comments!

Question of the Week: With it being Father’s Day, I thought we’d have a ‘guy’ centered question. There seems to be a stereotype that grown men don’t really like theme parks. I’m not sure why that is but… If you were trying to convince a man to visit Disneyland or Disney World what would you bring up to try to persuade him to go?

Cassie – Happy Father’s Day to all! I think everyone has a little bit of a child still in them. No matter your age, everyone is young at heart. I would convince a reluctant older gent by asking him to tap into his younger self and try to see the park through the eyes of a child. I actually had to do some convincing with my father the last time we went to Disneyland together. He flat-out refused to go on splash mountain, but through the power of pursuant persuasion, we got him on it! Of course he had an incredible time on splash mountain and the picture of his face grinning from ear to ear proves it! 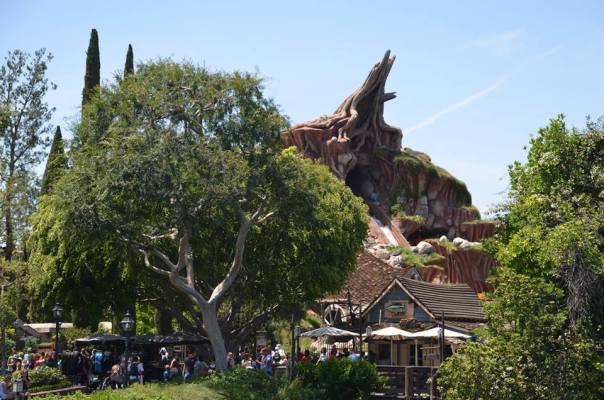 Leslie – Happy Father’s Day everybody! I know for my dad a big draw is the food. He really enjoyed his time at Disney but I think the food was his favorite part. With so many different delicious things to try it is easy to see why there is such a draw from the restaurants. Thrill rides are also a great attraction too, but I don’t suggest doing both around the same time!

Melissa H. – I think that I would really focus in on the food and the rides that I think would intrigue him. I would point out how many incredibly delicious things there are to try at the resort. In addition I would really want to point out the fact that when you are at Disney, the world outside of the gates seems to vanish and you can relax and enjoy your day for a while.

Melissa L. –Hmmm this is hard for me since I’m thinking of my dad who doesn’t care for crowds, doesn’t like to spend money, and doesn’t like getting really hot. But, now that I’ve experienced the wonders of the Disney Dining Plan, I think that would be a great draw. Convincing them that you are paying for everything up front and knowing you want to walk around the park and not have to keep spending money on meals I think would make him happy!

Kelsee – I would try to persuade them with the thrill rides. In general, guys seem to enjoy the bigger rides at the parks. Also, if they have children, it’s always a bit easier to use them as a persuasion tool because they’re going to the parks for their kid’s experience rather than just for themselves. Alcohol also helps in some situations since they do sell alcohol throughout California Adventure at the Disneyland Resort and Epcot, Hollywood Studios, and Animal Kingdom at the Walt Disney World Resort. I feel like Epcot is especially a way to convince them to go since you can “have a drink around the world” at the World’s Showcase. Luckily, both my husband and my dad (though he is reluctant at times) enjoy the parks and don’t need much persuasion.

Andrew – I was also going to say the thrill rides and food. So, in trying to be different, I think there are plenty of other ways to persuade a guy who’s reluctant to go to Disney Parks, especially Disney World. The resort on the east coast offers some impressive golf courses, camping, boating, fishing, water sports, spring training baseball, and much more. The west coast has plenty to offer too, just not as much in the resort, as the beach is a few miles away, the weather is wonderful, and the cuisine is great. As for actually in the parks, the architecture is amazing to look at. Tom Sawyer Island offers a break from the people and some terrain to conquer. I believe the Disney Parks offer something for everyone and that includes all the guys who don’t think they would like being there!

Let us know how you convince people to go to the Disney Parks in the comments!  If you like what you’re reading here on Wandering in Disney please go like our Facebook Page and subscribe to us via email or WordPress.  You can do both of those things on the right side of this page.

Thank you for reading and we hope you have a wonderful week!  Happy Father’s Day!

Tagged as: Disney Parks, Disney World, Disneyland, Things for dads to do at Disney